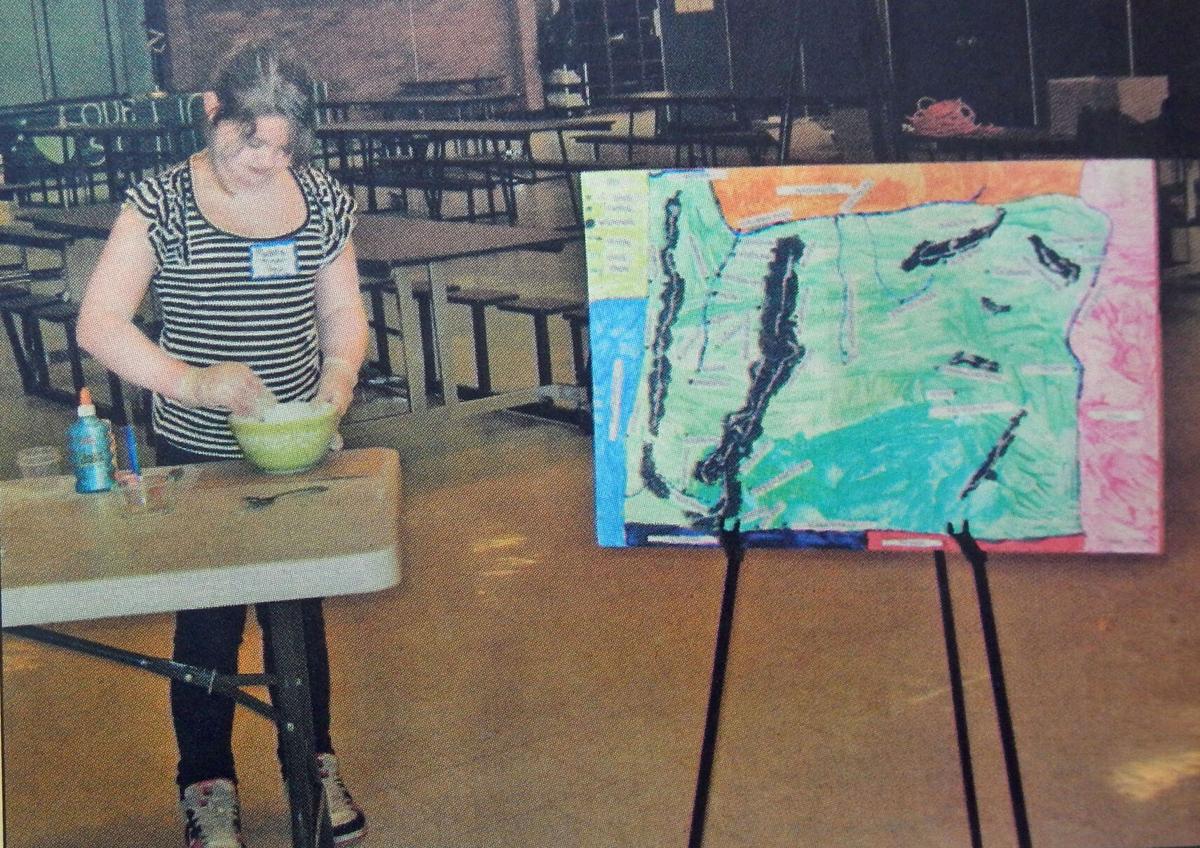 Junior 4-H member Maddie Miner-Paul demonstrates 'How to Make an Oregon Map' during a presentation in 2011. 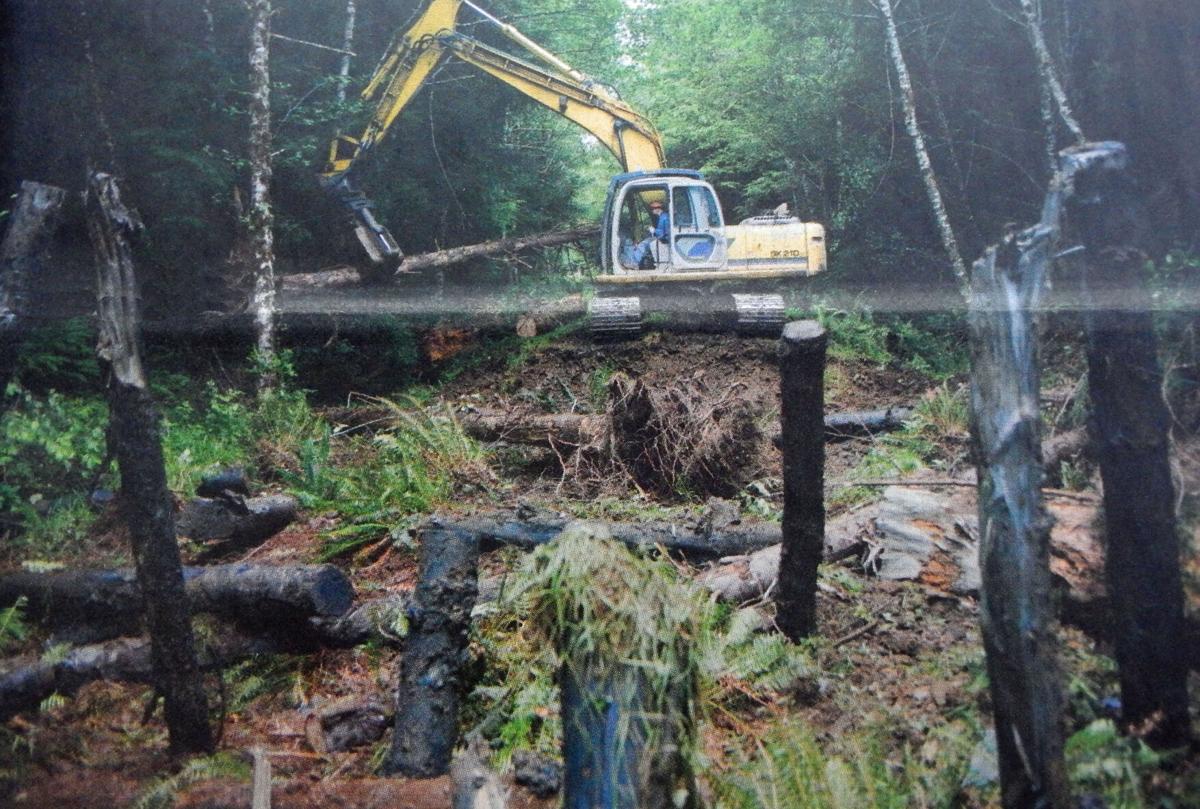 Shayne Odell, of Clatskanie’s Eric Hepler & Sons Inc., sets aside a tree trunk while on Tillamook Head in 2011. 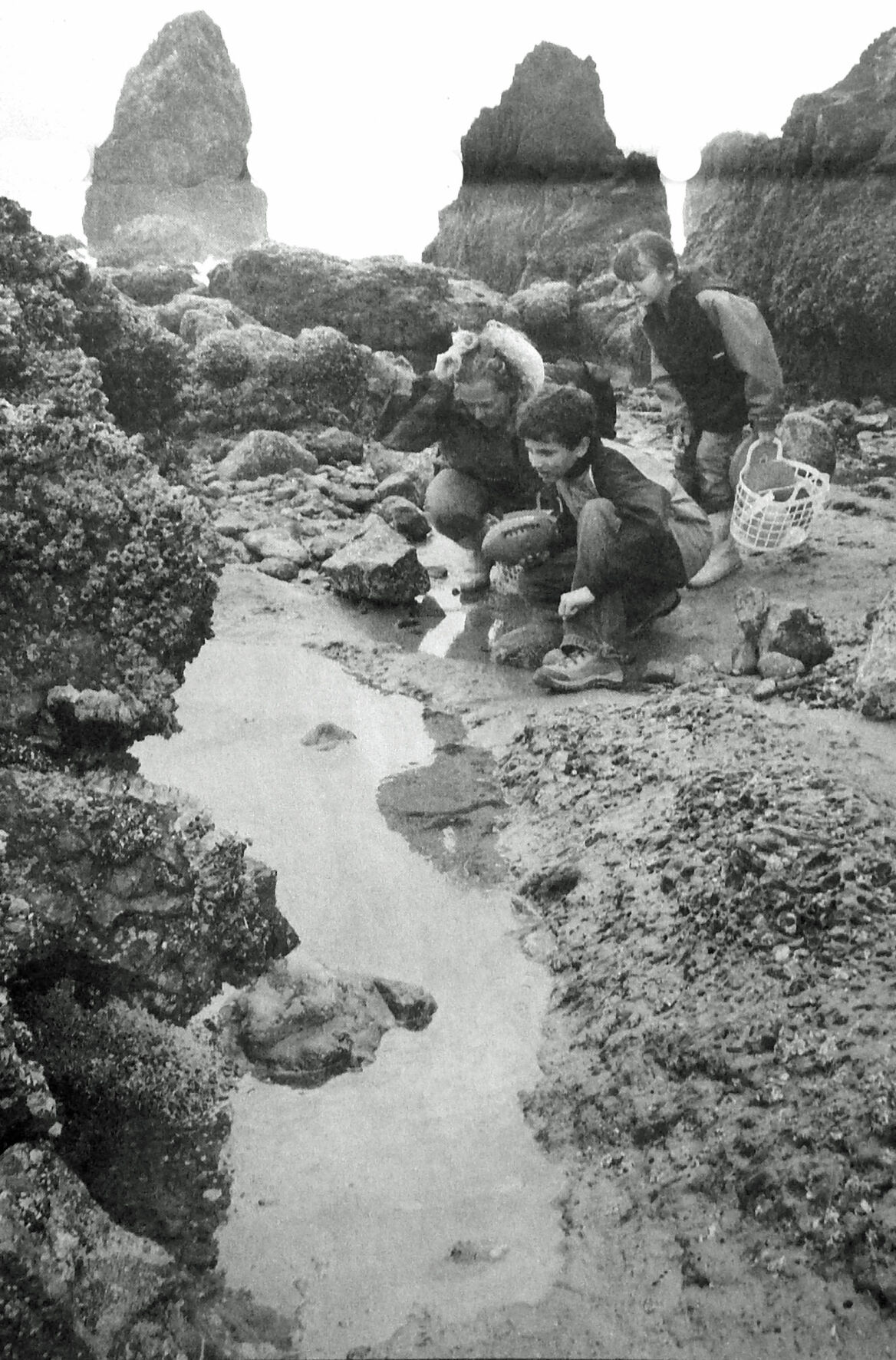 Residents and visitors were reminded to check the tides and watch the ocean while exploring on the beach in 2011. 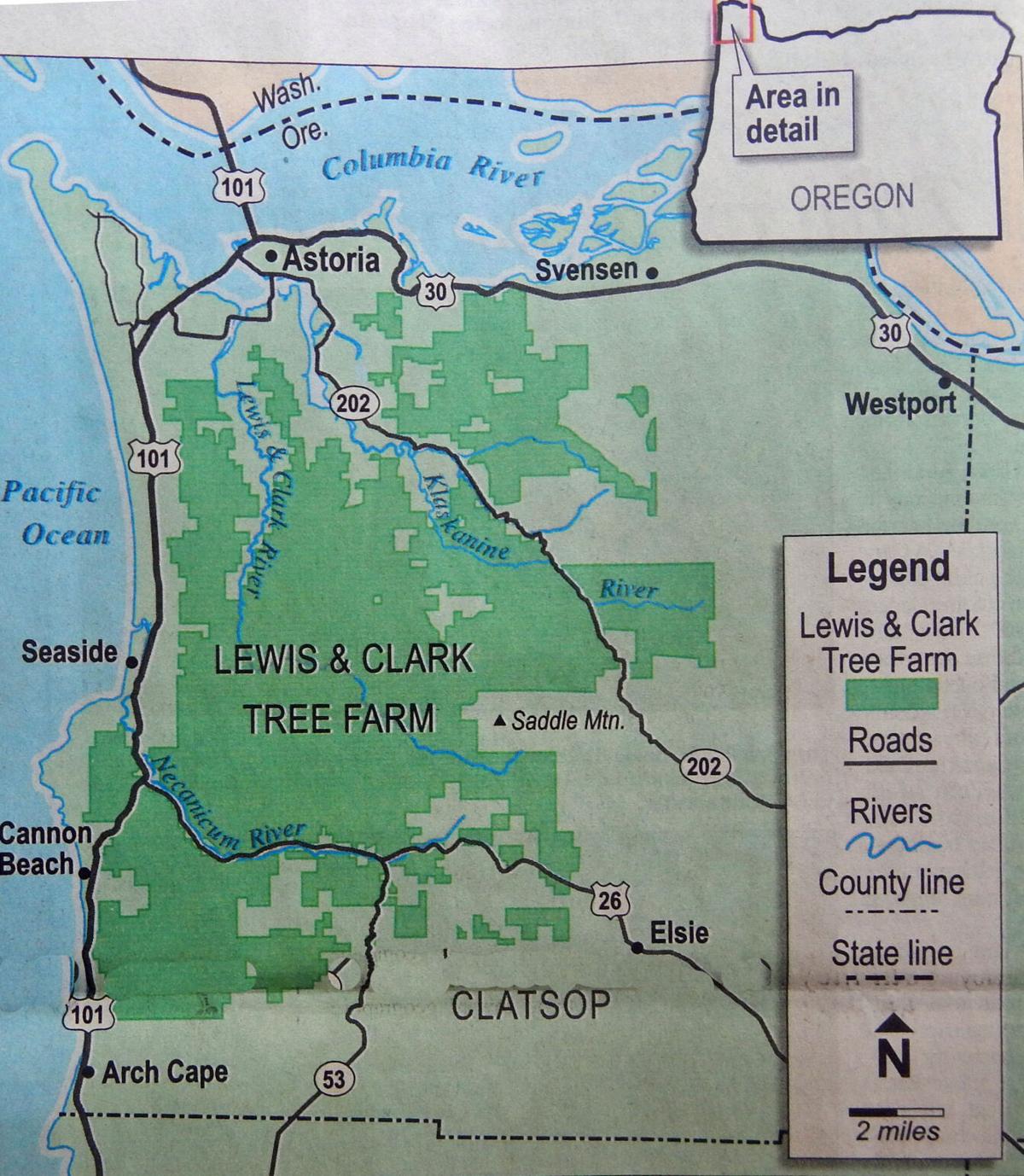 A map of timber holdings in Clatsop County in 2011.

Junior 4-H member Maddie Miner-Paul demonstrates 'How to Make an Oregon Map' during a presentation in 2011.

Shayne Odell, of Clatskanie’s Eric Hepler & Sons Inc., sets aside a tree trunk while on Tillamook Head in 2011.

Residents and visitors were reminded to check the tides and watch the ocean while exploring on the beach in 2011.

A map of timber holdings in Clatsop County in 2011.

The largest tract of industrial timberland in Clatsop County has changed hands a half-dozen times in 30 years.

The land was sold from Crown Zellerbach to Cavenham Forest Industries, who later sold it to Hancock Lumber, who sold it to Willamette Industries in 1996. Weyerhaeuser grabbed it in a hostile takeover in 2001 and sold it to Portland-based Campbell Group last year.

But one of these companies is not like the others.

Its emergence as Clatsop County’s new timber giant is part of a larger, nationwide trend in forestland ownership.

In doing so, they’ve severed the traditional ties between timberland and sawmills. Most of their land holdings, including 140,000 acres of Clatsop County timberland, have been sold to pools of investors who could live on the other side of the continent — or the globe.

“It’s a fairly broad shift across the country,” said Ross Gorte, a timber industry analyst for the Library of Congress. “I wouldn’t be surprised if we saw the timber industry, as we have known it at least, be largely out of the landowning business in 15 to 20 years.”

Oregon State Parks is gearing up for another camping season along the coast.

Spring break is just around the corner and campgrounds are filling up quickly.

Many people will also visit day-use areas to beachcomb, swim, fish and hike.

The powerful storms that recently hit Oregon should remind springtime visitors to the coast to be especially careful — logs near the surf or on sand are susceptible to waves, making them dangerous to be near. Wave-tossed driftwood piled on the beach is unstable and dangerous to climb on.

The same waves that piled driftwood has eroded and weakened cliffs and hillsides. Stay on trails and respect fences and boundaries.

For the past few weeks, 4-H members prepared speeches and practiced delivering information on a particular subject. The presentations were given in front of a judge, parents and other members on March 8.

Some subject matter included “Making a Snuggle Blanket,” “How to Make an Oregon Map,” “Making Bubble Gum,” “How to Show a Pig” and “Rabbit Agility 101.”

The 4-H members in grades four to six talked for three to 10 minutes. Those in grades seven to 12 were required to talk for 10 to 20 minutes. Members also gave impromptu speeches about various aspects of the 4-H program. Other judging criteria were appearance, general presentation, subject matter and the result it had on the audience.

Two fishermen have filed a class-action lawsuit in an effort to break up a giant seafood company that operates in Oregon, including Warrenton.

Lloyd Whaley and his son, Todd, from Brookings, along with Michael Haglund, an antitrust lawyer from Portland, seek up to $520 million in damages and a slew of injunctions that would effectively end Pacific Seafood’s dominant role in the West Coast fish business.

A section of 10th Street in Astoria, just north of Marine Drive, collapsed beneath a loaded dump truck. The driver escaped injury.

Gearhart resident E.A. “Bob” Clark, owner and operator of the truck, was badly shaken as the rear of his vehicle suddenly dropped beneath the pavement.

“I thought the world was coming to an end,” he said.

A representative of the owner of the John Jacob Astor Hotel proposed Monday night a $4.5 million convention center with parking and shops on the hotel site, if individuals or a group from Astoria comes up with $300,000 of it.

Robert Marcille, of Seattle, a representative of Seattle restaurant owner William Sander, told the Astoria City Council that the city would be a natural for a convention center because of its geographical location, history and recreation attractions. Portland architect Jim Oliver, with Marcille, said the 47-year-old, eight-story hotel was in such poor condition that the only thing it was good for was tearing down.

A major collection of photographs and records covering half of a century of Pacific Northwest history has been given to the Oregon Historical Society by the Burlington Northern Railroad.

The collection was assembled by the Spokane, Portland and Seattle Railway, founded in August 1905, and became a part of Burlington Northern at the same time.

In addition, he said, the historical society has been given 600 file boxes of railroad records that include invaluable historical material on Oregon and Washington state tourism, transportation, commercial development and industrial development.

The collection also includes material on the Oregon Electric Railway and the Oregon Trunk Railroad. It contains records of some stagecoach lines that preceded railroad expansion into Oregon.

PORTLAND — A court test of Oregon’s 1967 beach law will begin Monday with a trial in U.S. District Court.

William Hay and Georgianna Hay, owners of the Surfsand Motel in Cannon Beach, challenged the constitutionality of the law. It establishes the right of public access and state sovereignty on coastal dry sand areas.

Schools must develop a forward-looking concept for world citizenship and must help to establish world government and maintain the peace.

Such is the report brought back by A.C. Hampton, Astoria School District superintendent, from regional meetings in New York and Chicago of the American Association of School Administrators.

Hampton declared that the prominent educators who conducted the meetings emphasized the importance of gearing the educational system to new concepts of international relations brought by World War II.

Activity at the Columbia River Packers Association shipyard on Young’s Bay is largely limited to getting ready for the Alaska expedition.

Ten 18-foot boats, used in Bristol Bay by setnet tenders and for other purposes, are under construction. The spruce-hulled oak-ribbed crafts are 8 feet wide, square on both ends. Four “monkey” boats, which are used in shallow draft towing in Alaska, are about 95% complete. Five sailing boats for Bristol Bay gillnetters are ready.

An 80-foot fir-hull power fish scow has been launched and will be going on a trial run in a few days. It was constructed for Libby, McNeill & Libby Cannery. The company is also proceeding to build two 48-foot purse seiners for the same firm.

The Port of Astoria dredge Natoma, which has always made money for the Port on private dredging contracts, is going to get a physical checkup of her boilers, engine and hull. She may get a new diesel engine to replace the “steam pot.”

Negotiations are pending for sale of the P.J. McGowan Cannery and the company’s other remaining properties in Ilwaco to the owners of the North Oyster Co. of Oysterville: Ted Holway, Roy Kemmer and Glenn Heckes.

Owned by McGowan and other assets in Ilwaco are the principal remaining properties of the important fishing enterprise, which McGowan founded in Pacific County in 1853, 14 years before the first salmon was canned on the Columbia River. In 1883, the founder took in his four sons, James W., John D., Charles C. and Henry S.

Copies of a prospectus for a proposed new airline to serve Northwest Oregon were exhibited here this week by Joseph Stein, a former U.S. Navy flier who has been engaged by promoters of the enterprise to handle the details in connection with its organization.

The firm has made application to the Civil Aeronautics Board for a permit to operate the airline service, which would reach Astoria, Tillamook, Newport, Coos Bay, Corvallis and Eugene, with Portland as the terminus from which its operations would radiate.