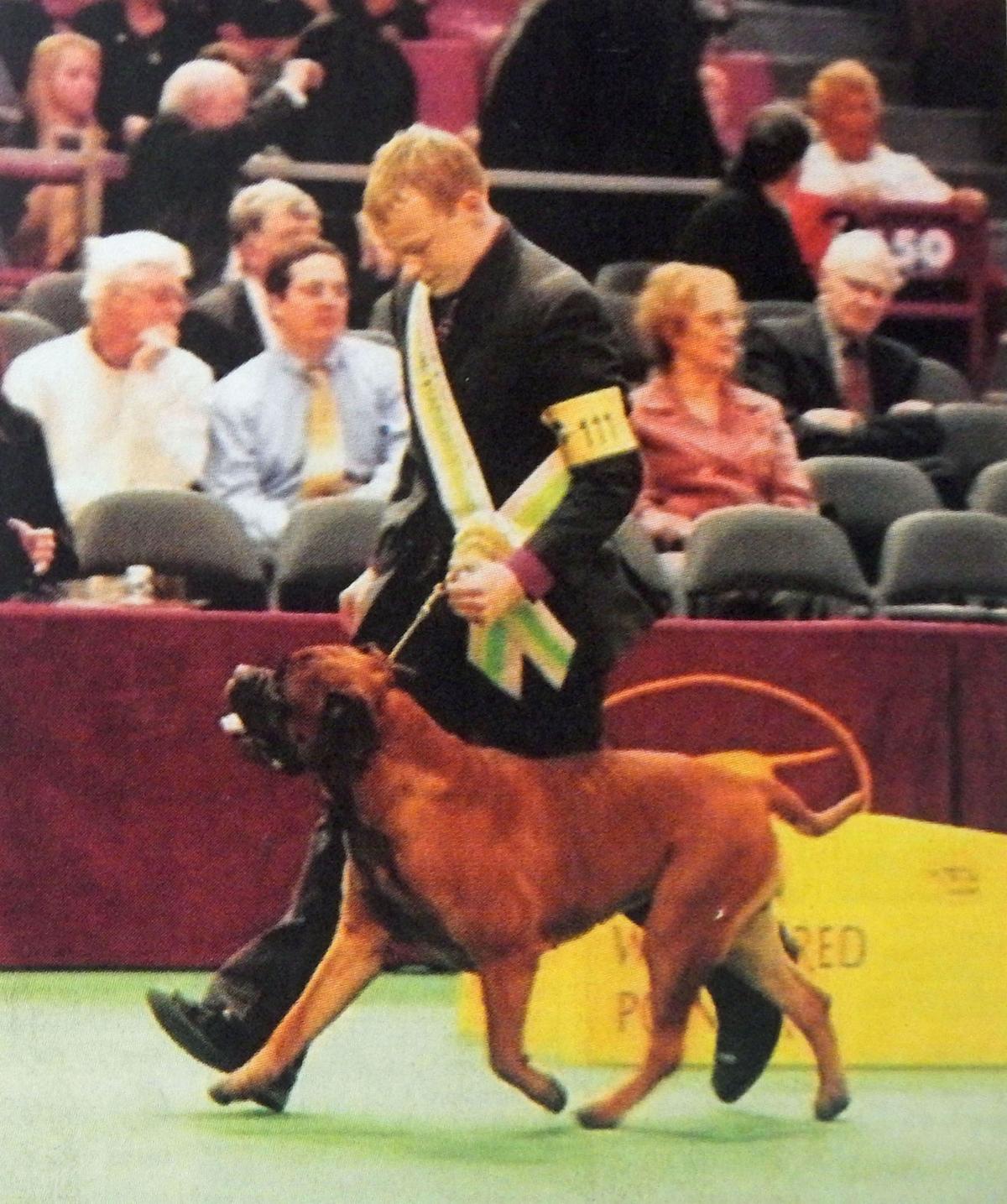 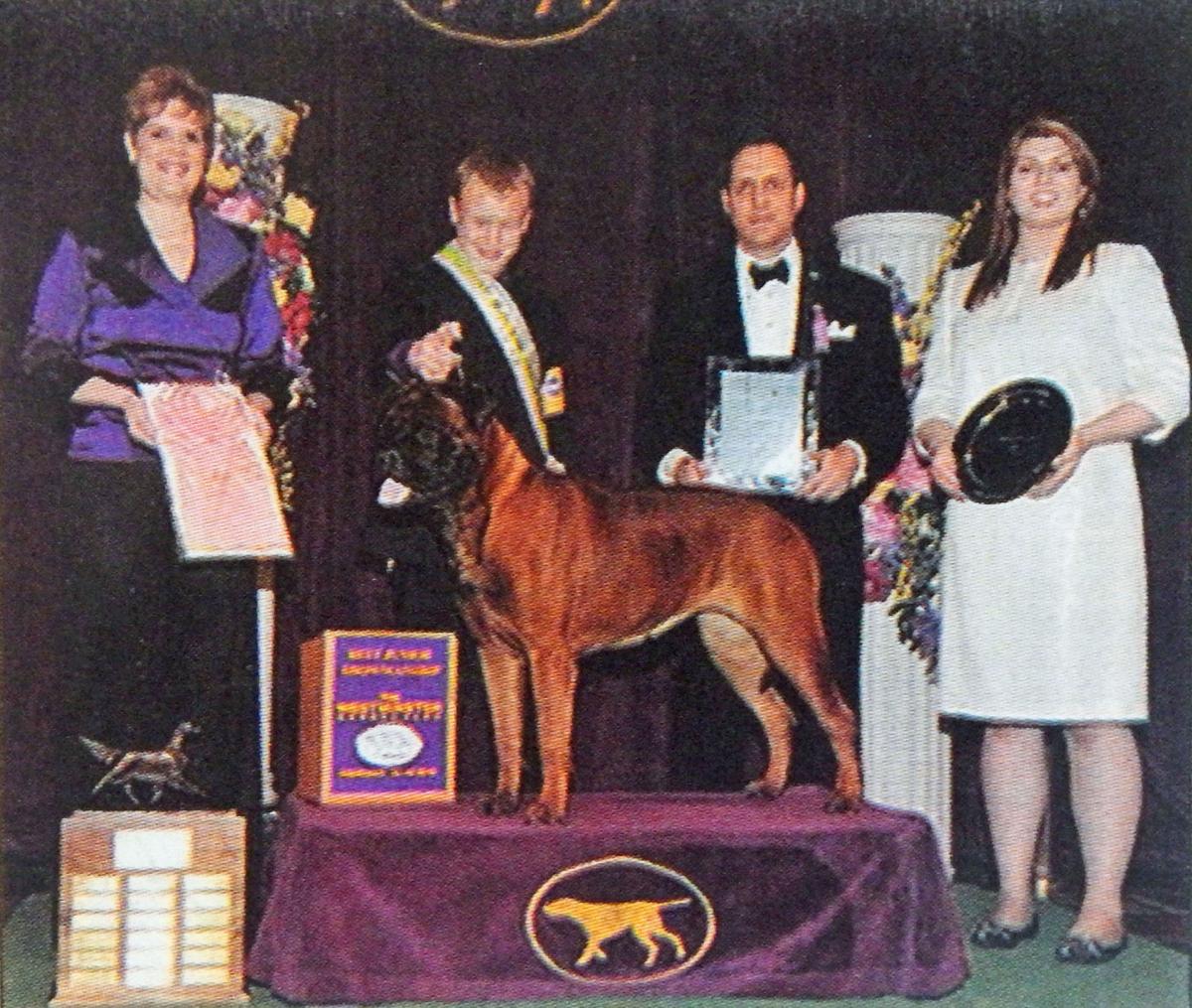 Aaron Bradshaw, second from left, with Forte, his bullmastiff, is named 2010 Best Junior Handler at the Westminster Kennel Club Dog Show in 2010. 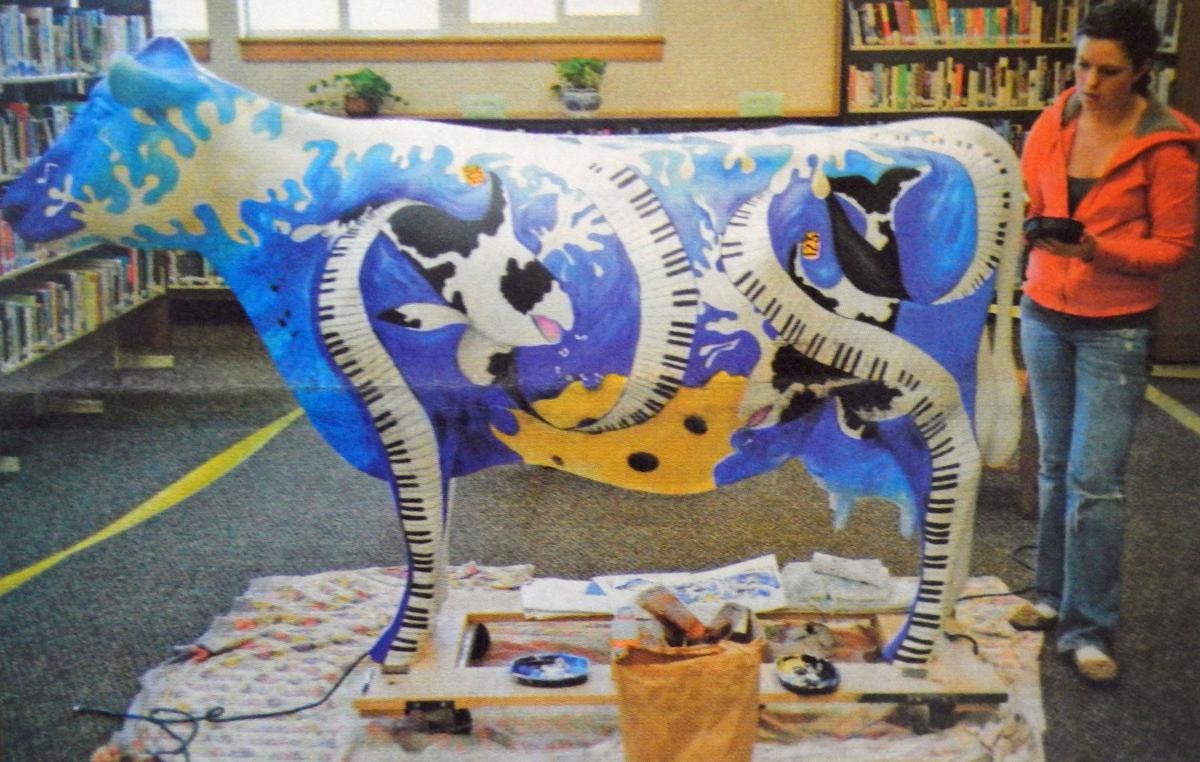 Katie George paints her entry for the Fifth Annual Lucerne The Art of Dairy Taste of Moo-sic art contest in 2010 at the Knappa High School library. 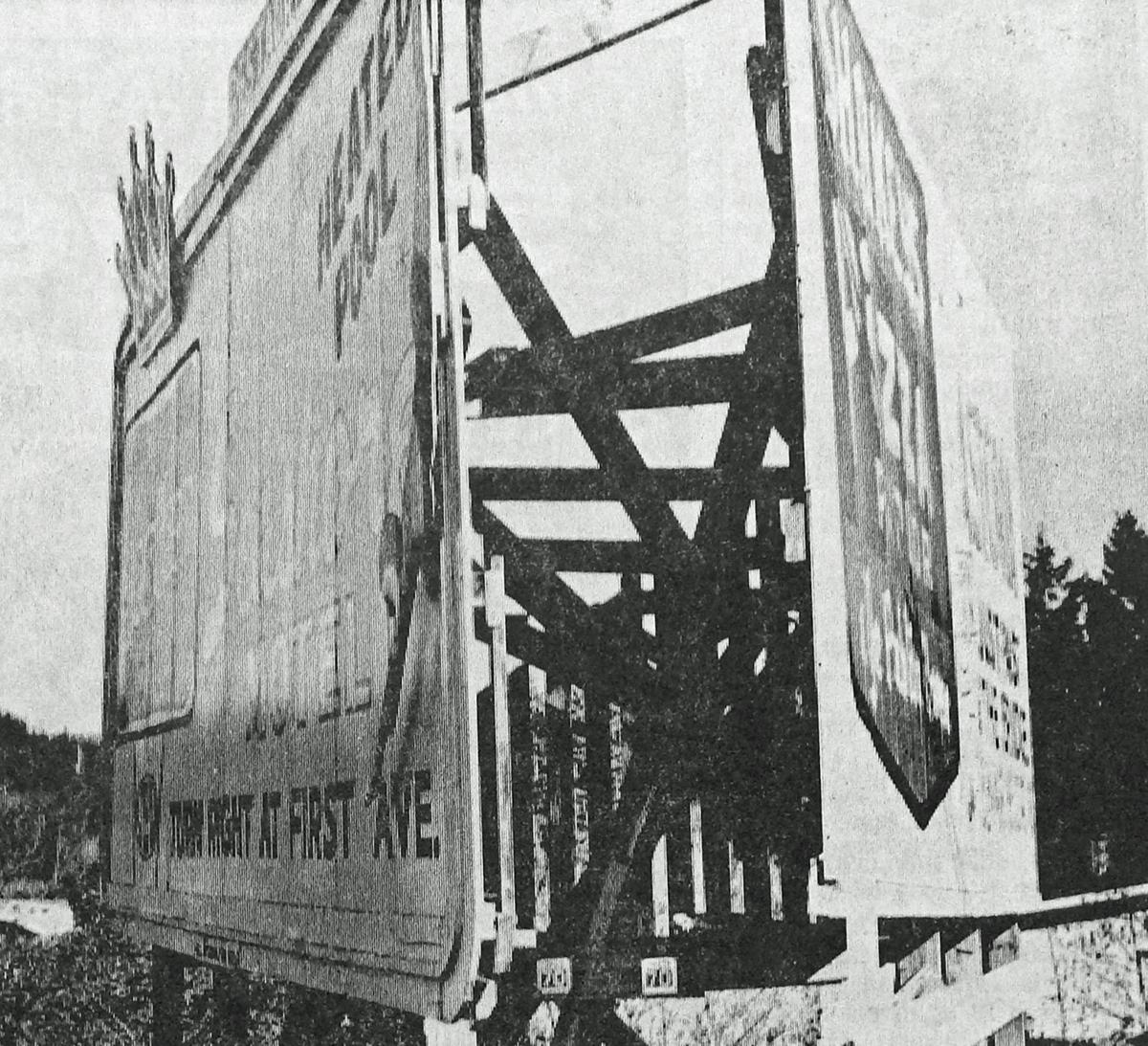 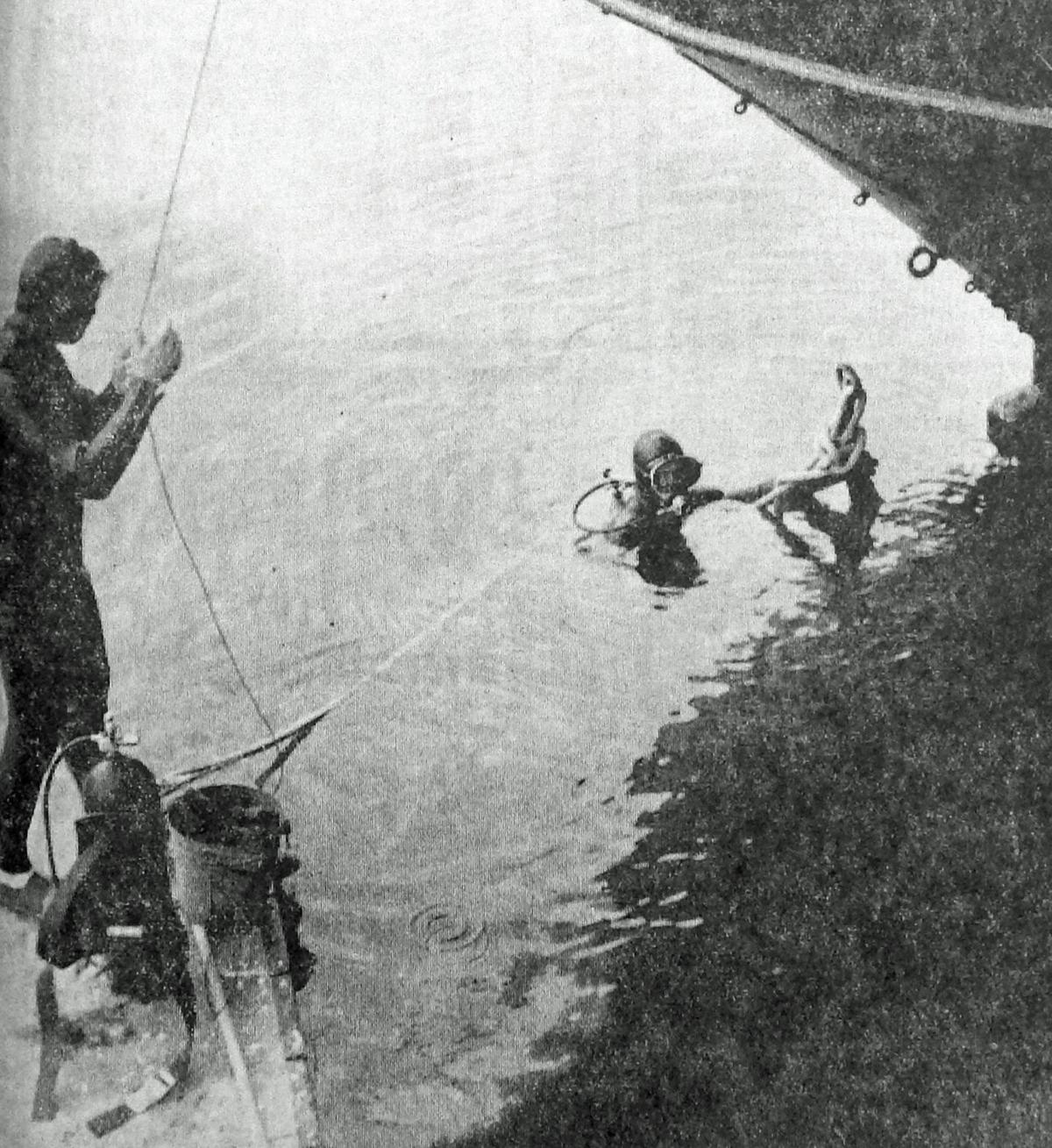 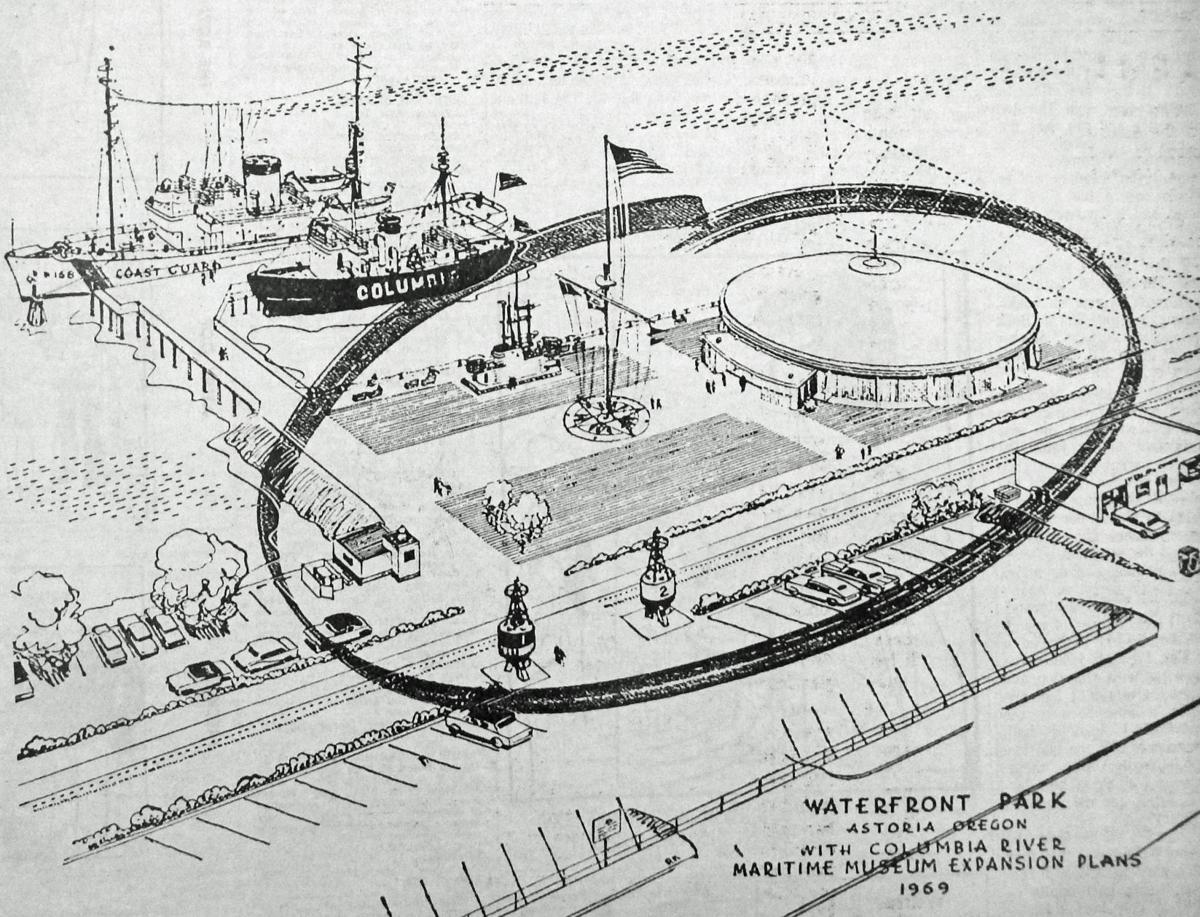 Waterfront Park development, as pictured above in a drawing by Rolf Klep, director of the Columbia River Maritime Museum, is to provide space for large artifacts which presently are out in open or stored and unavailable for public display because of lack of appropriate space. Outline of building in background is proposed future development, if need develops, in 1970. 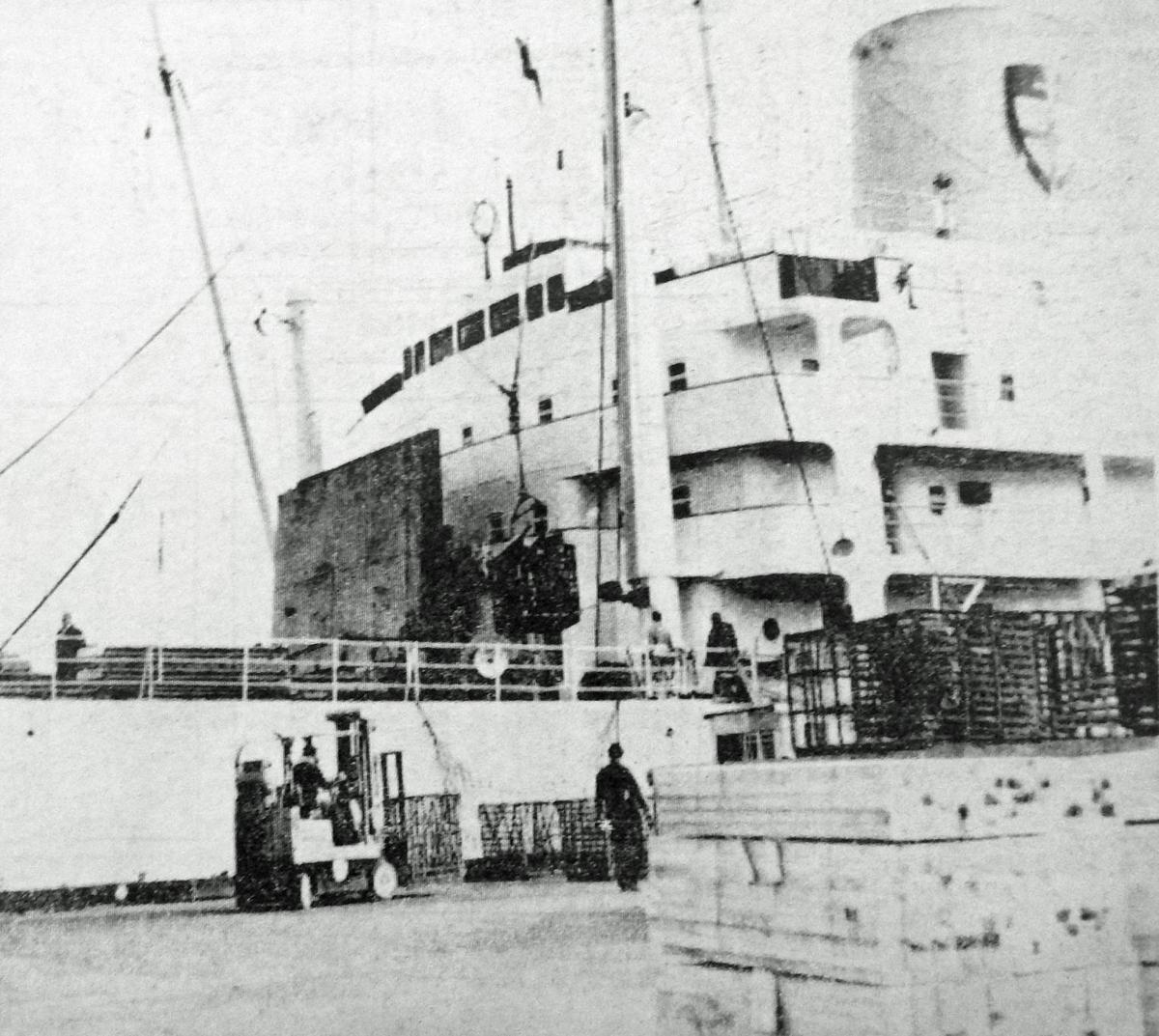 he Turakina unloads tuna at Pier 2 at the Port of Astoria in 1970.

Aaron Bradshaw, second from left, with Forte, his bullmastiff, is named 2010 Best Junior Handler at the Westminster Kennel Club Dog Show in 2010.

Katie George paints her entry for the Fifth Annual Lucerne The Art of Dairy Taste of Moo-sic art contest in 2010 at the Knappa High School library.

Waterfront Park development, as pictured above in a drawing by Rolf Klep, director of the Columbia River Maritime Museum, is to provide space for large artifacts which presently are out in open or stored and unavailable for public display because of lack of appropriate space. Outline of building in background is proposed future development, if need develops, in 1970.

he Turakina unloads tuna at Pier 2 at the Port of Astoria in 1970.

At age 15, Aaron Bradshaw is a rising star in the dog show world, with dozens of wins under his belt and several awards. The home-schooled Seaside teen’s performance was especially outstanding last month at the Westminster Kennel Club Dog Show, held at Madison Square Garden in New York City.

Up against 120 other kids ages 9 to 17, Bradshaw showed his 3 ½-year-old female bullmastiff, Forte, in the junior handler competition and captured first place. Named 2010 Best Junior Handler at Westminster, Bradshaw took home a trophy and a $6,000 scholarship. He was also named best overall junior handler in the country in 2009.

Loggers working near Rockaway Beach have discovered the wreckage of a World War II-era warplane in the woods not far from a naval air station commissioned in 1948.

Investigators said human remains may be in the aircraft.

The origins of the Curtiss SB2C Helldiver, a U.S. Navy dive bomber, are a mystery. The crash site is in the area patrolled by crews from Tillamook and Astoria naval air stations during World War II.

The nation’s top ocean research agency said Tuesday the Port of Newport on the Oregon Coast was the best base for its West Coast research fleet.

The review was the latest round of a hot political battle between Oregon and Washington state over which state will provide the home port for the National Oceanic and Atmospheric Administration’s four research ships.

KNAPPA – There has been a peculiar guest occupying prime real estate in the Knappa High School library for the past week or so.

It is a life-size, hand-cast fiberglass cow, and senior Katie George is painting it for a national competition – the fifth annual Lucerne The Art of Dairy Taste of Moo-sic art contest.

With an underwater theme that blends orca whales, spiraling piano keys and Swiss cheese with uncanny success, George’s bovine creation is nearing completion. She spends a handful of hours in the book-filled room each day brushing on acrylic paint in swirling, blending strokes.

George is one of 30 finalists in the country to have the cow sculpture delivered to their schools, competing for the grand prize of $20,000 for their school, plus $5,000 each for the student and teacher. There are two Oregon finalists.

George’s piece is fanciful and full of painstaking detail, and whimsically fills the assignment’s basic criteria – combine music and dairy to decorate the cow’s surface.

“I call mine ‘Echo moo-cation,’” she said last week.

Oregon’s coastal counties have been the target of scathing comments the past year, from Highway Commission Chairman Glenn Jackson and others, about the “junky” appearance of some areas. Some coastal officials have snapped back that the seashore areas have made efforts to improve appearances, but much of what Jackson has said still is true.

It’s a little difficult at times to pinpoint just why an area, along U.S. Highway 101 for example, has a shabby appearance, but a recent letter to the editor on this page noted a big factor: billboards.

The writer of the letter said he referred specifically to “those ugly, unsightly and aesthetically poor-taste billboards which dot the countryside and the cities in this area.”

The Columbia River Maritime Museum has launched an $172,000 campaign to preserve and display many of the large boats and other historic items which are too large and heavy for the main museum building at 16th and Exchange streets.

“We must do something to protect the treasures too large and too heavy to put in this building,” said Rolf Klep, museum director, from his maritime museum office overlooking the proposed waterfront park.

Concerned about the effects such a closure might have on the economy and the general livability of the area, many Cannon Beach citizens indicated they had expressed their views in letters to the State Highway Commission and to other officials. Some said they would be at the special hearing on the matter to be held Monday at the courthouse.

Tuna, 670 tons of it, was unloaded from the Turakina freighter Wednesday at Pier 2, Port of Astoria, for Bumble Bee Seafoods before sailing time at 5 p.m.

The Turakina, a New Zealand ship, visiting the West Coast of the United States for the first time, had received the tuna from a Japanese firm that had caught the fish in the area of the Fiji Islands.

John Maraklawa, for 40 years a resident of Astoria until two years ago, is the city’s first Japanese national to be released from the government’s relocation center and returned to his home here. Maraklawa came to Astoria in 1904 with his wife and two children and until the time of the fire in 1922 was employed by Marcus Whitman at the old Weinhard hotel. After the fire he went to work at St. Mary’s Hospital where he was employed until the start of the war with the exception of a few months. At St. Mary’s, he said today that government officials in Idaho released him from the camp, telling him that his “record is clear” and that he should return to his place of former employment.

The city commission learned at its meeting Monday night that the city is now without crushed rock for street improvement work and that purchase of the necessary material is likely to cost a great deal more than it did when the quarries within the city limits were operating.

Unheralded but right on schedule, spring arrived in Astoria and the lower Columbia country this morning. Observance of the seasonal event was limited this year to the display of greenery in a store here and there along Commercial Street with few attempts being made to capitalize on the coming of spring in a big merchandising way. The day was ushered in with sunshine and a not-too-spring-like zephyr blew in from the river.

The Astoria Marine Construction Co. launched its 39th and final vessel in its current war contract series Friday morning at its Lewis and Clark yard, an inter-island, refrigerated cargo vessel for the Navy, the YP 621.

America’s latest Navy ship was christened by Miss Dorothy Duoss of Astoria. The vessel’s auxiliary engines were installed by the company at the port here, then towed to the Port of Longview for installation of her main engines and returned.

Launching of the company’s final Navy ship was occasion for an AMCCO party at Amato’s here this week.

Columbia River gillnetters returned to the river last night after three days of sensationally-heavy salmon fishing brought on by what the industry described as “ideal” weather, which has put the river at the most proper stage and with storms believing to have driven fish in from the sea.

Several fishermen turned in high boats with an excess of 1,000 pounds during last week’s fishing, which opened at mid-week after a later-winter closure, and which closes again this weekend. One fisherman turned in a total of 3,800 pounds of salmon in three nights of fishing. Averages were believed to be between 400 and 500 pounds.