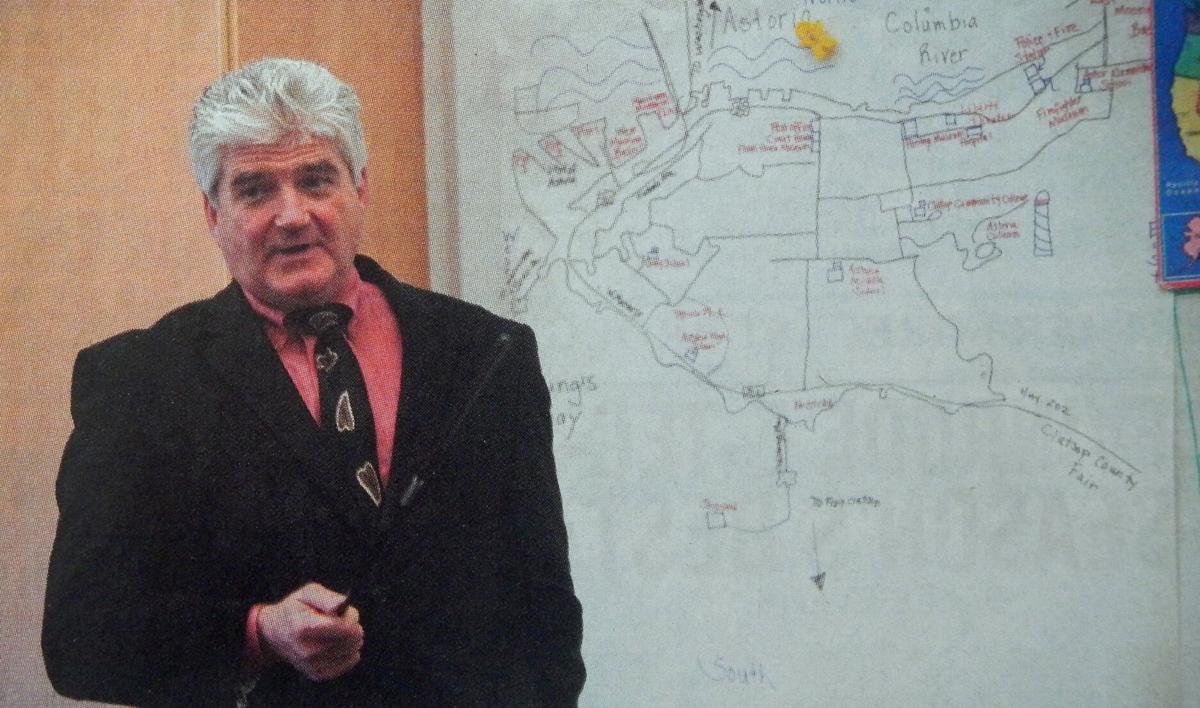 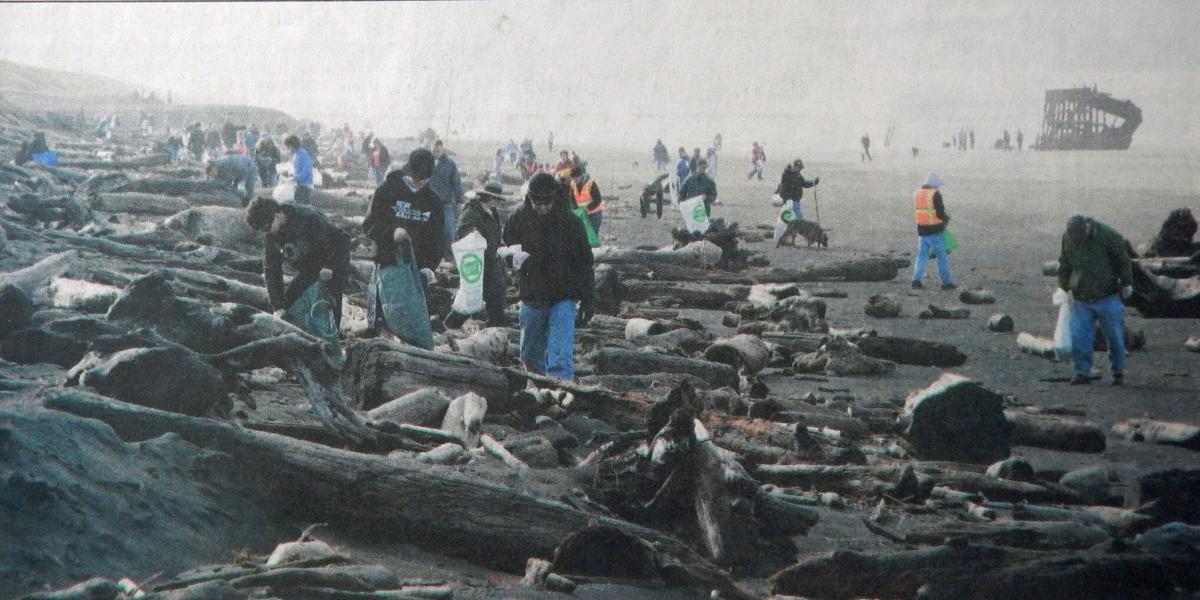 Volunteers pick up trash along the beach in Fort Stevens State Park in 2011. 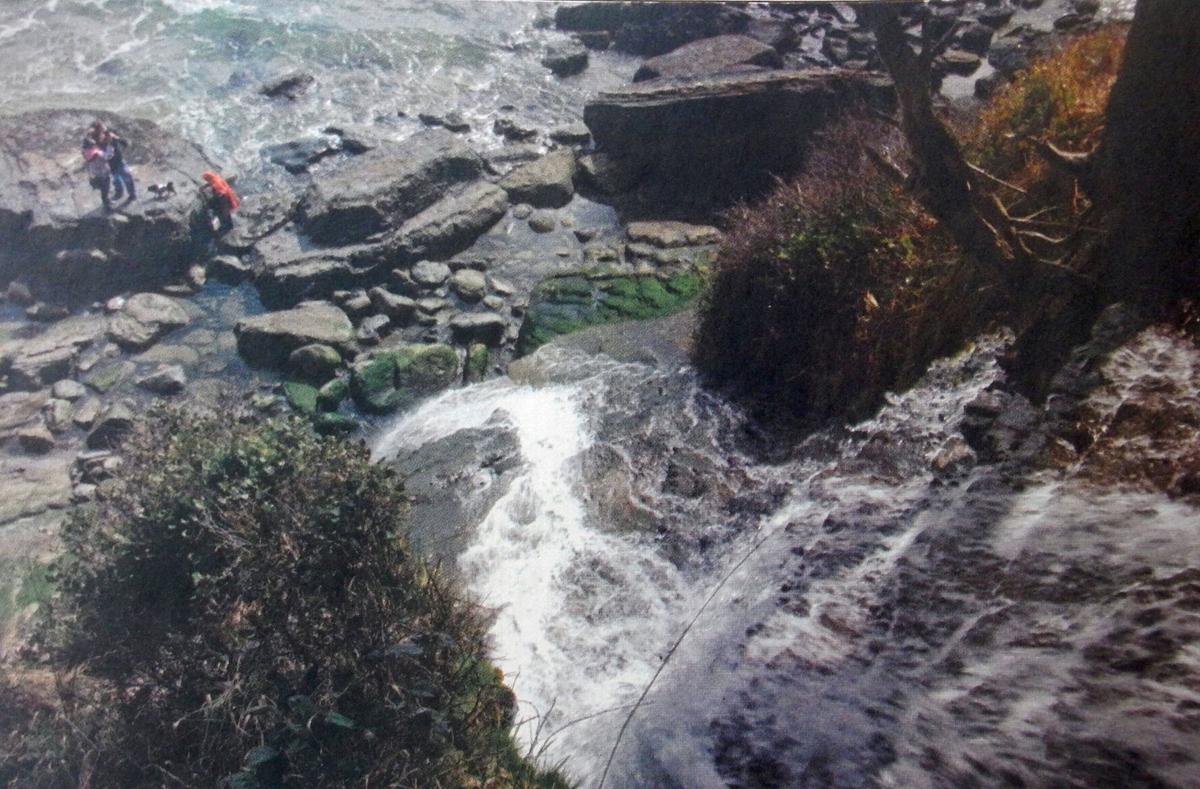 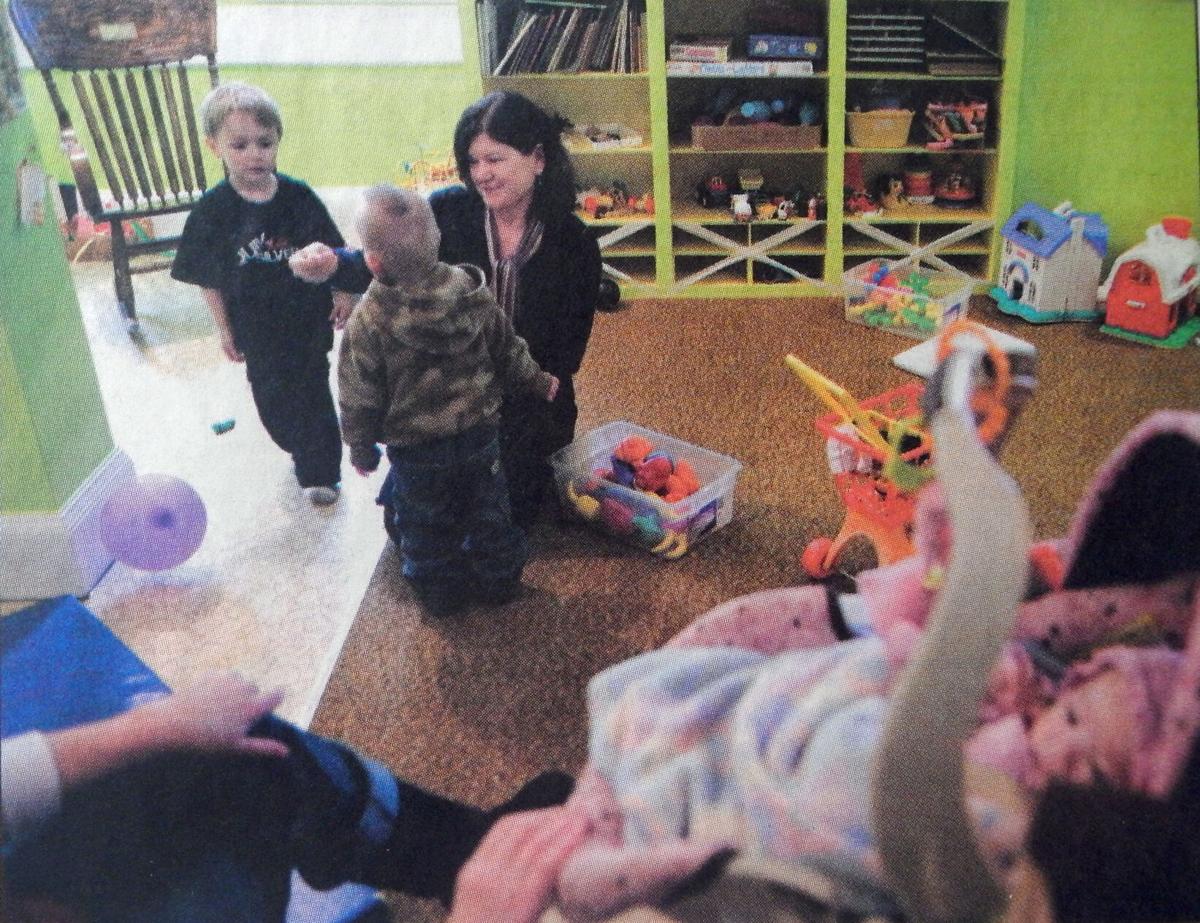 Ann Lederer, executive director of the Clatsop Court Appointed Special Advocates program, watches over children of parents involved in a parenting class in 2011. 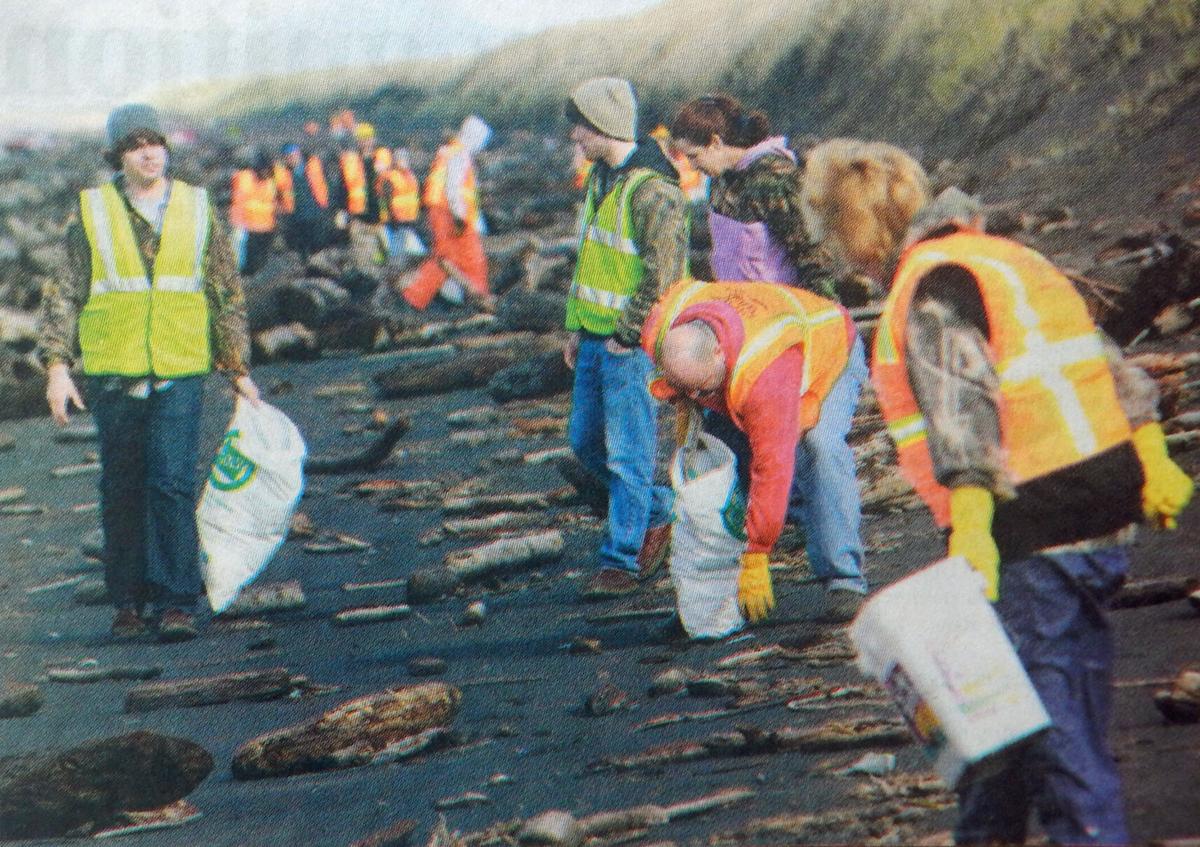 Employees of Western Oregon Waste and Recology participate in a beach cleanup in 2011. 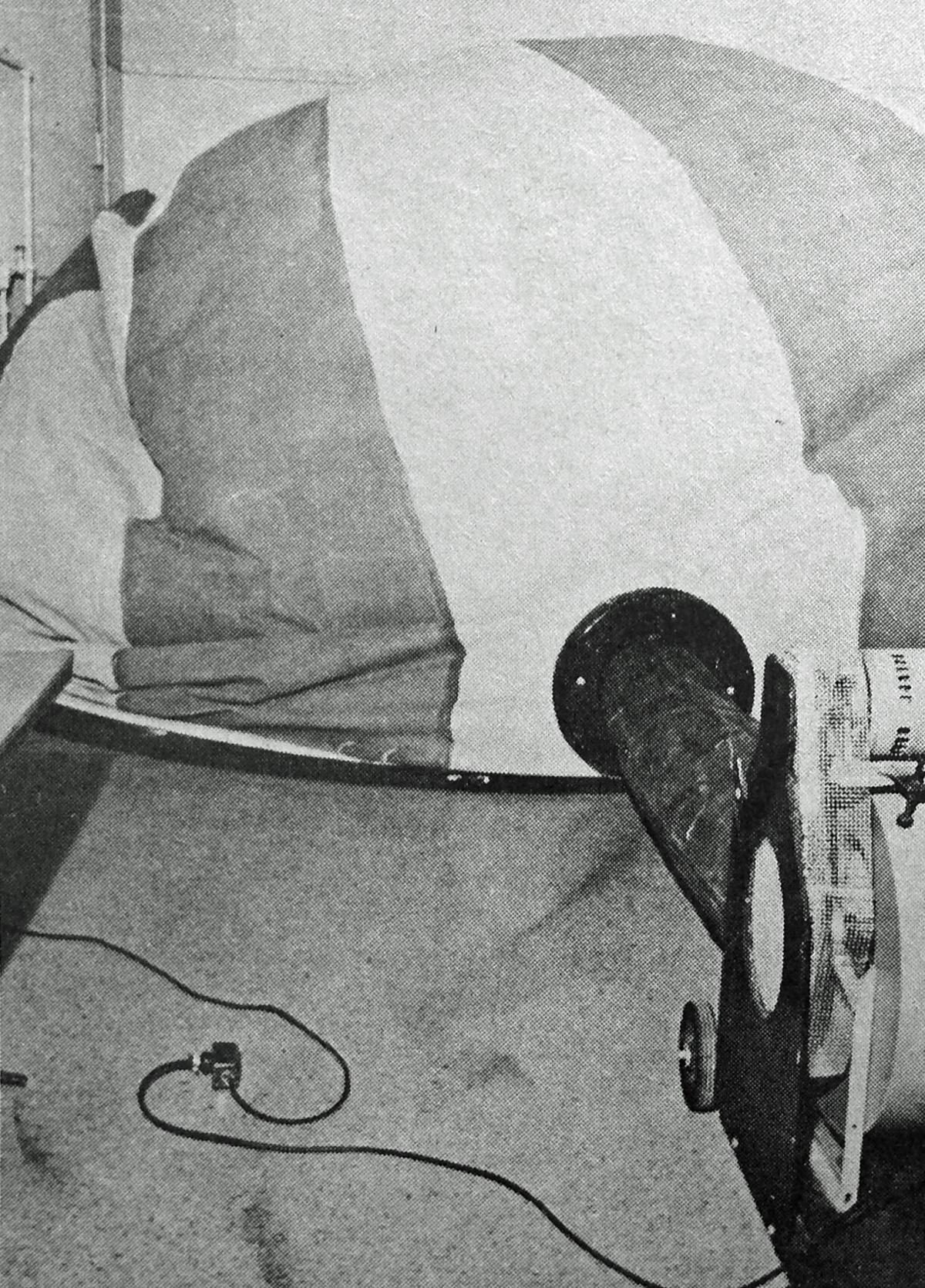 A canvas balloon being inflated in 1971. 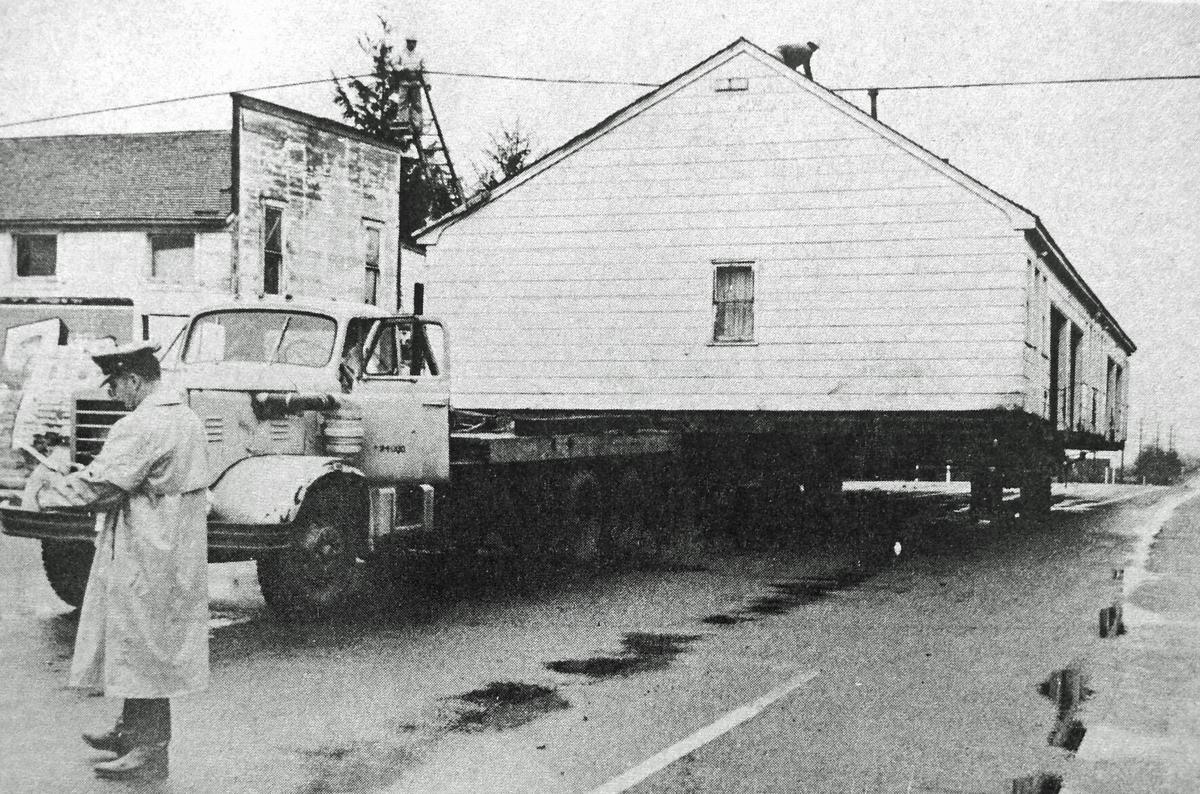 Gerald Reynolds of Portland received a ticket while moving an old motel building from the Adult Student Housing site near the Old Youngs Bay Bridge in 1971.

Volunteers pick up trash along the beach in Fort Stevens State Park in 2011.

Ann Lederer, executive director of the Clatsop Court Appointed Special Advocates program, watches over children of parents involved in a parenting class in 2011.

Employees of Western Oregon Waste and Recology participate in a beach cleanup in 2011.

A canvas balloon being inflated in 1971.

Gerald Reynolds of Portland received a ticket while moving an old motel building from the Adult Student Housing site near the Old Youngs Bay Bridge in 1971.

But in Clatsop County, the day took on a broader perspective, as the North Coast Marine Corps League Detachment – 1228 put on a “Welcome Home Veterans” event. The nonpolitical celebration at Lum’s Auto Center in Warrenton honored all veterans and active duty personnel from all military branches. The Marine Corps League is an organization of active and inactive U.S. Marines and their families that supports the ideals of the Corps through various activities. A couple hundred people participated, most of them Vietnam veterans but also from other conflicts. Included were a 93-year-old woman who served in the U.S. Navy during World War II; those serving in Afghanistan and Iraq; and active duty personnel.

More than 3,200 volunteers scoured Oregon’s coastline Saturday and picked up nearly 44,000 pounds of trash as part of SOLVE Oregon’s spring beach cleanup. After a rainy morning, the clouds parted as the event started on the North Coast and most people worked under sunny skies.

The beaches in Fort Stevens State Park got the “professionals.” Western Oregon Waste and its parent company, Recology, had more than 90 employees and family members picking up trash just as they do during their work week.

Steve Thompson wanted to do something to benefit the community.

But as a self-employed business consultant, the world of social work and family court hearings was “totally foreign to me,” said Thompson, who lives in Warrenton.

“At the time, I felt isolated. My wife had died. My children were gone,” he said.

That changed, however, when he ran into Ann Lederer, executive director of the Court Appointed Special Advocates program at a social function. Lederer suggested that he volunteer for the program and he decided to try it out.

Nearly three years later, Thompson said he has had to make some tough decisions about what’s best for the children whose cases he has been assigned to monitor.

Yet, he added, he gets personal satisfaction in seeing these children, who once were abused and neglected, “starting to thrive.”

Thompson is one of 37 volunteers in Clatsop County who advocate for children removed from their homes because of abuse or neglect.

It was 11:35 a.m. and for the children in three second-grade classes Wednesday, it was time for a break from the routine.

They streamed down the stairs and flowed through the halls, finally filling a corner of the library at John Jacob Astor Elementary School.

All 148 second-graders in the school district got a personal history lesson from Astoria Mayor Willis Van Dusen, loosely focused on Astoria’s bicentennial year.

The two-year dream of a working planetarium at Astoria High School has become a reality.

Members of the school’s science club showed off their project at the high school in a series of 30-minute showings.

The planetarium, basically a canvas balloon, originated during the school carnival of 1969 when a hastily-made papier-mache structure was put to use. Inflated with a converted furnace blower, the dome-shaped structure is the brain-child of Pete Yost. He, Ted Stethem, Tom Memeth, Craig Meyers, Robbie Law, Scott Stemper and Don Orwick completed the project with materials donated by area businesses and individuals.

After being put together, the canvas balloon fully inflates in five minutes. Entrance to the planetarium is gained through an air lock. The entire planetarium is easily taken apart and folded up and can be transported to and assembled in any place that has a room large enough.

All planetarium shows are written, narrated and performed by the students. The shows vary widely as the students can make them cover many areas of astronomy and space science.

The three-story condominium will duplicate a group of four now under construction at Lincoln City, Hoffman said. The four buildings will each be 56 feet by 120 feet, with eight units on each floor. All units will have excellent ocean views, he said.

SEASIDE — Architectural plans for the Seaside Civic Center are nearly final. April 15 has been announced as the date for letting bids for the convention center.

March came in like the proverbial lion and growled just about every day in Clatsop County. Such a potpourri of weather had not been seen in these parts during a March month since weather records were officially recorded here in 1850.

Erected at Eagle Cliff, Washington, shortly after the Civil War, the large residence of William Hume, member of the first salmon canning company on the Columbia River, is being torn down for lumber.

In 1941, the substantial dwelling was purchased by A.F Schneider of Longview, Washington, who for some time had intentions of remodeling the two-story frame building but recently decided to rebuild in the old Hume estate.

At one time, before the dwelling was ransacked, it was well furnished. The fireplace in a high-ceilinged hall was faced with marble. Nearby was a small room filled with guns. Hume was one of the country’s great hunters, having made it his profession for some years in California where he sold wild game. Trophies of the hunt adorned the house.

New Aleutian earthquakes generated another succession of tidal waves that battered the Alaska peninsula in the second consecutive day of a Pacific basin disaster that already has killed at least 140 persons and taken a multimillion-dollar toll of damage.

Since her recent retirement as city health officer and appointment as consultant, Vernon has been conducting a survey of restroom facilities in the business district, which would be available to the public.

She said only a few stores have restrooms that are available to the public. She said they are entirely inadequate in size and numbers.

The Clatsop County Board of Commissioners decided warning signs will no longer be posted along Clatsop County roads warning garbage dumpers that the county court is determined to bring to justice all such violators.

Pointing out that ignorance of the law is no excuse, Judge Guy Boyington asked, “Why should we warn unthinking individuals that it is illegal to dump garbage along a public road any more than we should post signs to notify them it is contrary to law to commit murder?”

Raising of the 180-foot minesweeper AM-360, which sank in the Tongue Point moorage on March 26, will likely be undertaken by private interests.

After making surveys of the sunken unfinished minesweeper, the salvage steamer Discoverer, owned by the U.S. Navy and operated by the firm of Merritt-Chapman & Scott, will return to her station at Port Angeles. Sources said that the firm of Zimmerman & Devine was submitting a proposal to the Navy for salvaging the half-finished minesweeper, which sank while moored to a buoy in the anchorage.

The Columbia River Yachting Association is making plans for three days of sailing races during the annual Salmon Derby, according to Commodore T.B. Cook, of the Astoria Yacht club.