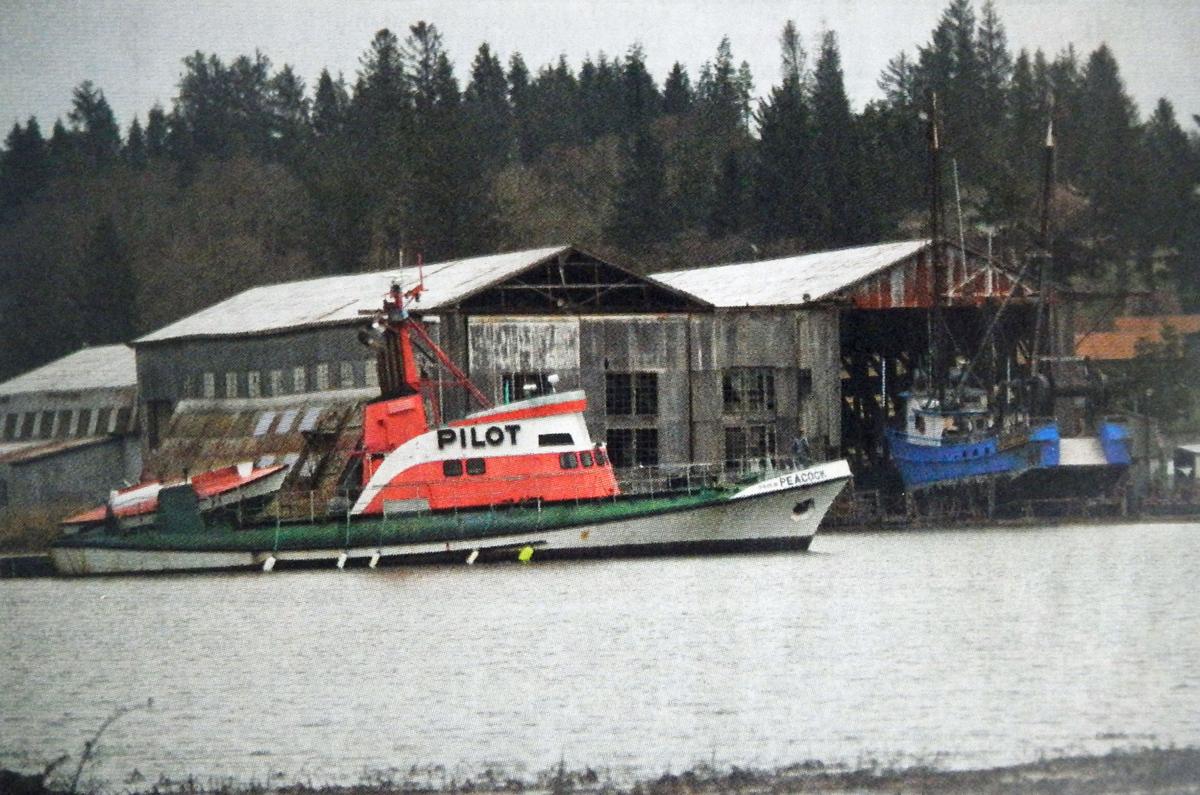 The old bar pilot boat Peacock pulls into dock for repairs at Astoria Marine Construction Co. on the Lewis and Clark River in 2010. 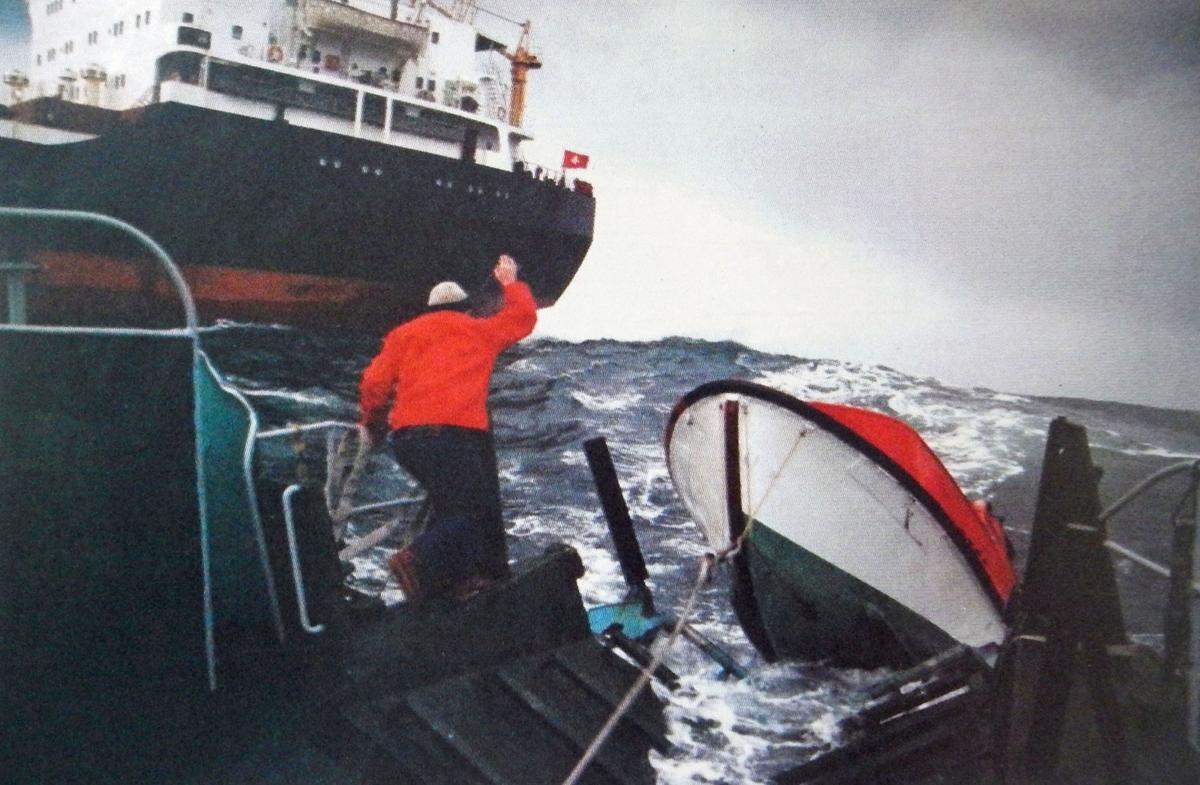 The daughter boat is launched off the stern of the bar pilot boat Peacock in 2010. In its 33 years of service, the Peacock ferried bar pilots to and from more than 120,000 commercial ships. 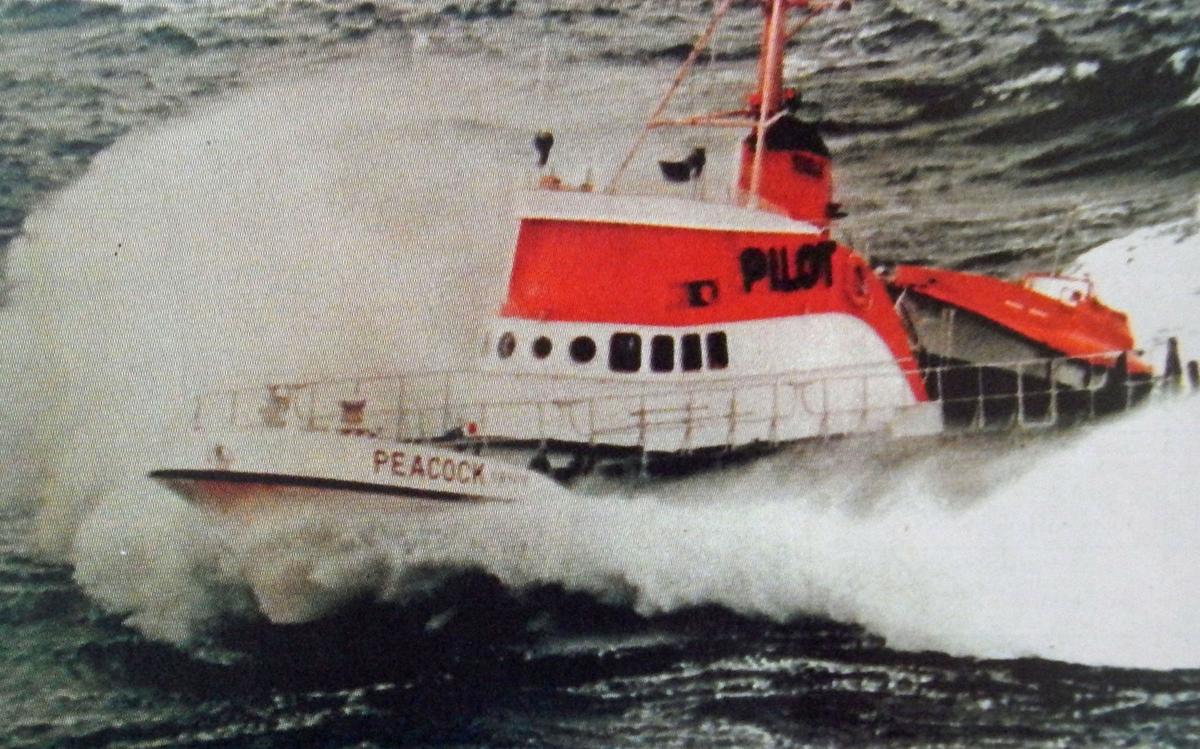 The bar pilot boat Peacock crashes through swells in 2010. 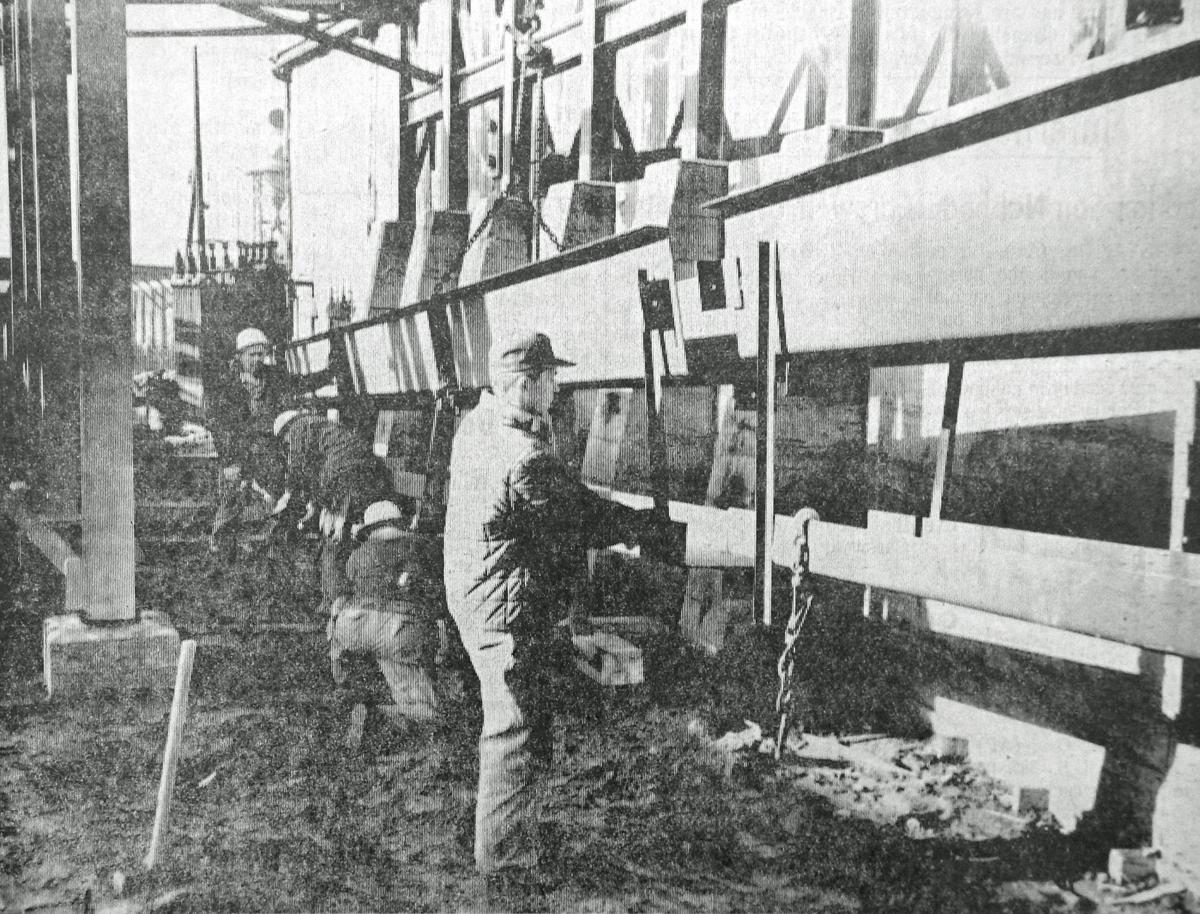 Workers move a conveyor into place on the Warrenton Lumber Co. construction project in 1970. From front to back are Ernest Mickle, Milford Mickie, Dude Hamilton and Si Jones. 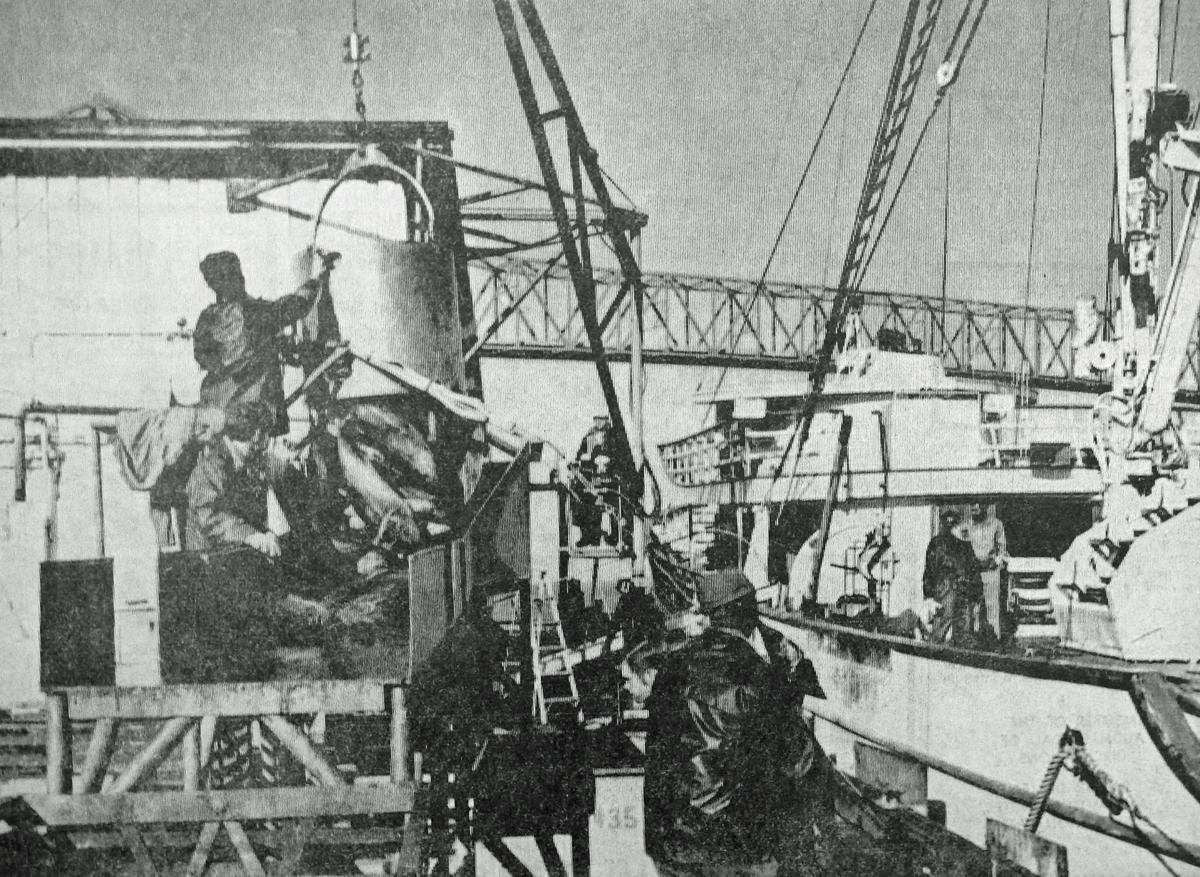 New motorized hoist is used for more efficient unloading of the Anne M, Bumble Bee Seafoods tuna seiner, which returned Tuesday with a full load of yellow-fin tuna taken in the eastern tropical Pacific off Central America in 1970. 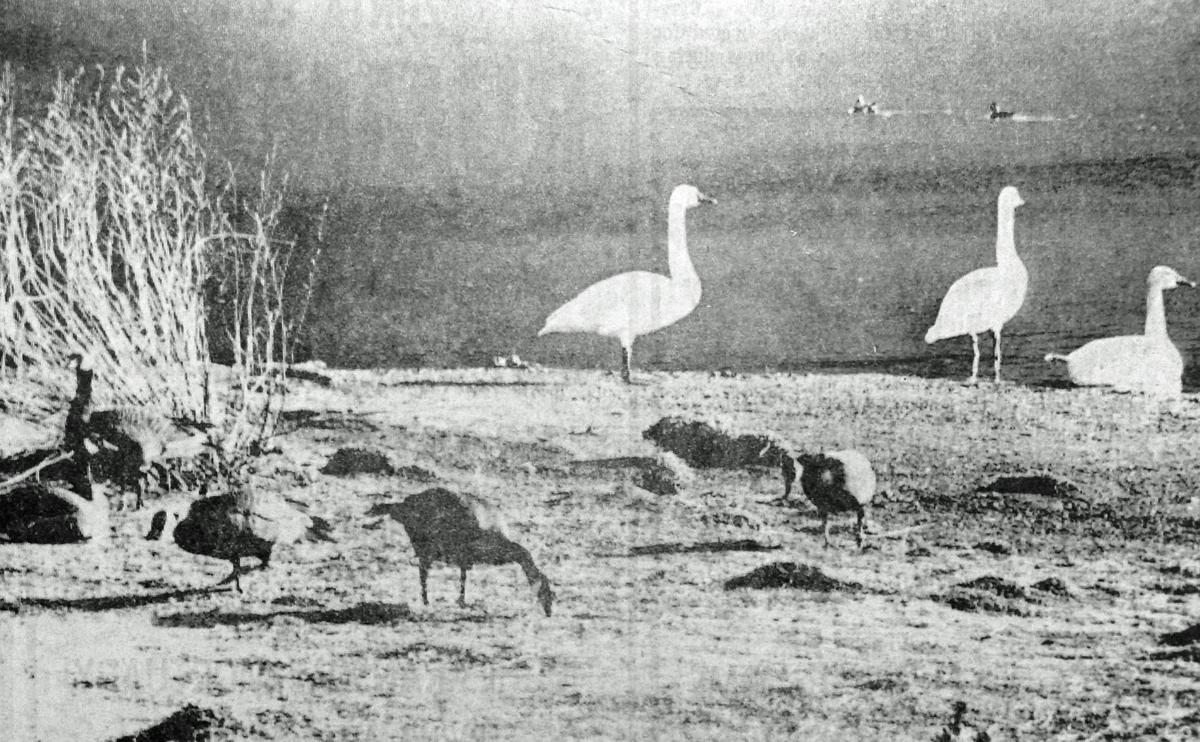 The old bar pilot boat Peacock pulls into dock for repairs at Astoria Marine Construction Co. on the Lewis and Clark River in 2010.

The daughter boat is launched off the stern of the bar pilot boat Peacock in 2010. In its 33 years of service, the Peacock ferried bar pilots to and from more than 120,000 commercial ships.

The bar pilot boat Peacock crashes through swells in 2010.

Workers move a conveyor into place on the Warrenton Lumber Co. construction project in 1970. From front to back are Ernest Mickle, Milford Mickie, Dude Hamilton and Si Jones.

New motorized hoist is used for more efficient unloading of the Anne M, Bumble Bee Seafoods tuna seiner, which returned Tuesday with a full load of yellow-fin tuna taken in the eastern tropical Pacific off Central America in 1970.

It’s been awhile since the bar pilot boat Peacock got to strut its stuff.

The 89-foot, self-righting vessel has been mothballed for the last 10 years after serving the Columbia River shipping industry from 1967 to 1999.

But soon it will shine — this time beckoning to Columbia River Maritime Museum visitors.

The Peacock played a pivotal role in the history of the Columbia River’s economy when the shipping industry shifted gears in the 1960s and needed to move containers on increasingly tight schedules.

With a 23-foot deployable daughter boat mounted on the stern and a top speed of 22.5 knots, the Peacock revolutionized the bar pilots’ ability to board cargo ships in stormy weather, dramatically reducing bar closures to a few days a year and keeping Columbia River ports competitive with others on the West Coast.

Bar Pilot Capt. Thron Riggs said no one boat has had a more significant impact on the economy of the Columbia River Basin since Capt. Robert Gray’s ship Columbia Rediviva, the first western vessel to enter the river in 1792.

A new location for spreading biosolids from Seaside’s wastewater treatment facility drew criticism from about a dozen nearby property owners at Monday’s meeting of the Seaside City Council.

The council gave them a forum, but took no action. “We’re going to take a look and review it with these people,” Mayor Don Larson said.

One of scientists’ biggest barriers to studying animals in the ocean is a lack of visibility underwater.

But Kelly Benoit-Bird, an associate professor at Oregon State University College of Earth, Ocean, and Atmospheric Sciences, has a way around that obstacle.

She’s taking a cue from dolphins, which use acoustics to communicate and navigate in the ocean.

Benoit-Bird spoke to a crowd of about 80 at the Columbia Forum in Astoria Wednesday about her search using high-frequency sound to study the behavioral patterns of ocean life as small as zooplankton and as large as whales.

Acoustic technology sends out sound signals that move through the water, bounce off animals and send information back about the size, shape and movements of marine creatures.

Benoit-Bird is using acoustics primarily to learn about the feeding habits of animals in the ocean.

The Warrenton-Lewis and Clark school merger proposal was defeated by voters during Friday’s election. Lewis and Clark residents killed the measure by voting 588 against and 200 in favor of the merger.

While Warrenton School District voters approved the proposal by some 24 votes, at 268 for and 244 against, the law states that both districts considering a merger must have voter approval.

The Astoria City Council received the last of seven cost estimates on construction of a sewage treatment lagoon Monday night and agreed to ask the chamber of commerce to name a committee to recommend a lagoon site.

Oregon will use a reservation system for campers in several major state parks this summer, The Oregonian reported today.

It will apply initially to at least 10 state parks which are overcrowded during the summer. Seven of them, including Fort Stevens, are on the Oregon Coast.

Astoria fishery and canning officials are skeptical about efforts of the Nixon administration to stop the threat of South Korean fishing in the Bering Sea, despite assurances from the White House, through U.S. Rep. Wendell Wyatt, that discussions are continuing with Korean authorities to make sure unauthorized fishing does not take place.

The 650 employees of Crown Zellerbach’s Wauna pulp and paper mill were honored Monday for recording no lost-time accidents during entire 1969 operations.

LONG BEACH — The cry of Canada geese is a common sound at the Willapa National Wildlife Refuge headquarters where a captive flock of these birds is kept in a display just off Highway 101, 13 miles north of Ilwaco.

Every year thousands of motorists stop the engines of cars at the attraction to look at the wildlife and listen for a while to sounds not produced by television sets, radios, automobiles or any of the other man-made products of progress that normally fill the air with noise.

The Canada goose was honking in this area a long time before the automobile, and though man is putting more and more of the former wilderness to his own use, the National Wildlife Refuge System hopes to insure that the opportunity to observe natural species of the area in its natural habitat will be an opportunity available for a long time to come.

An effort to uncover valuable records, letters, furniture, costumes and other relics of early Astoria days is being made by the Astoria branch of the American Association of University Women.

The new Clatsop County library to be built at the close of the war will include a pioneer museum and the collection of articles for this museum is being started now.

Personal reminiscences of men and women who saw this country in its early days will also be appreciated if they are submitted in readable form.

Navy and Marine patients at the naval hospital will have an abundance of Camel cigarettes this week. Capt. H.E. Ragle, commanding officer, received word Wednesday of the results of last week’s “Thanks to the Yanks” radio program in which 5,000 cigarettes were given to the Astoria hospital. The program was heard by a number of Astorians at the time. The program is a quiz affair with the smokes given as prizes. When questions are missed the cigarettes go into a duffle bag and at the end of the hour are turned over to a Navy or Army hospital.

A milk truck operated by Albert Matteucci parked on the 14th Street hill, between Grand and Irving avenues, slipped its brakes early this morning and rolled down the incline, striking the concrete abutment and overturning near the Star of Sea school building. Matteucci had left this car and was delivering milk in a store when the accident occurred.

Two hundred pints of blood for plasma were donated at the Astoria United Service Organizations this morning despite the fact that a large group of donors from the north shore were unable to report because rough weather prevented the ferry from landing at Megler.

Coast Guard officials today were investigating the cause of descent of a Navy blimp into Tillamook Bay during patrol duty Sunday.

All crewmen of the blimp, from the Naval Air Station Tillamook, were rescued by Garibaldi Coast Guard.

GUAM – Marines still were hacking away at two shrinking enemy pockets on Iwo Jima today, but the island was declared officially captured with 20,000 of its defenders already killed.

The stars and stripes were raised over the tiny stepping stone island 750 miles south of Tokyo at a formal ceremony at 9:30 a.m. yesterday — the 24th day of the battle of Iwo Jima.