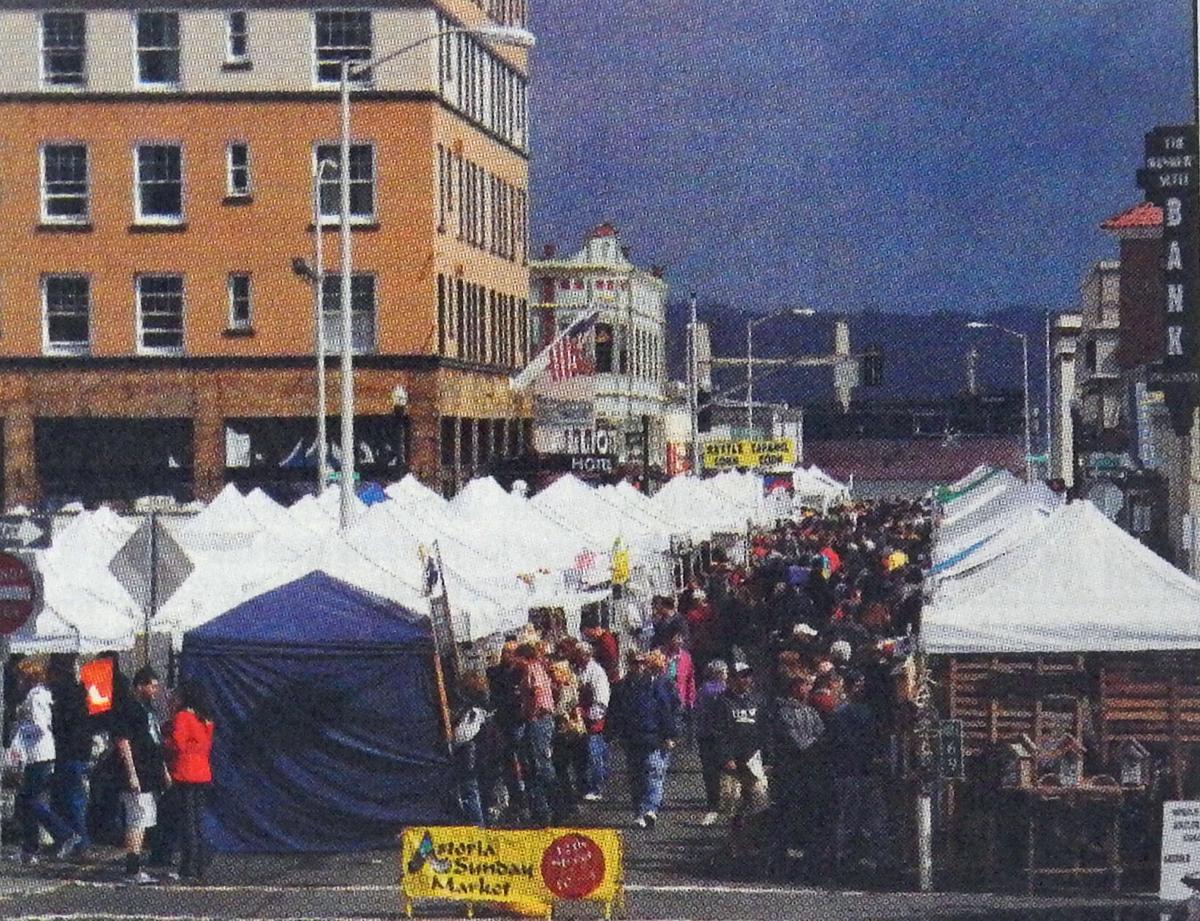 The Astoria Sunday Market began its season in 2011 with more than 150 vendors. 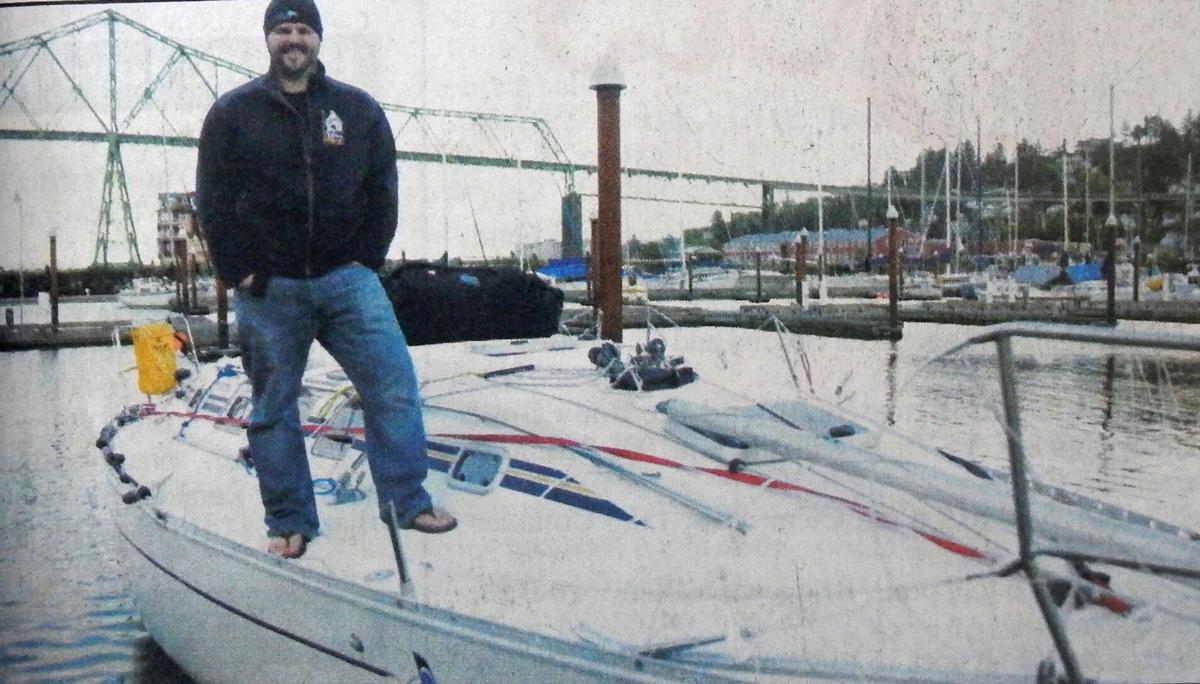 Ryan Barnes, of Portland, stands atop his 38-foot sailboat vessel, L’Orca, which was damaged by a breaching whale northwest of the Columbia River Bar in 2011. 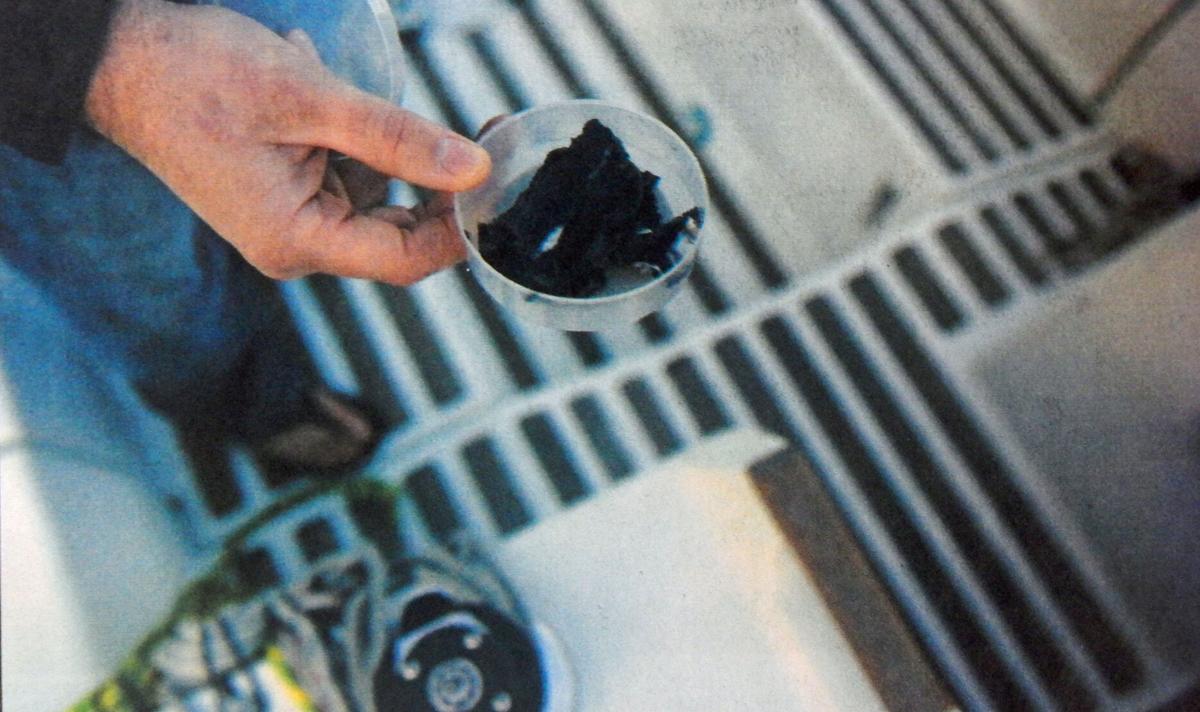 Ryan Barnes shows off a container filled with black pieces of whale flesh, a reminder for him and his crew of the whale that breached the water and crashed into his sailing vessel in 2011. 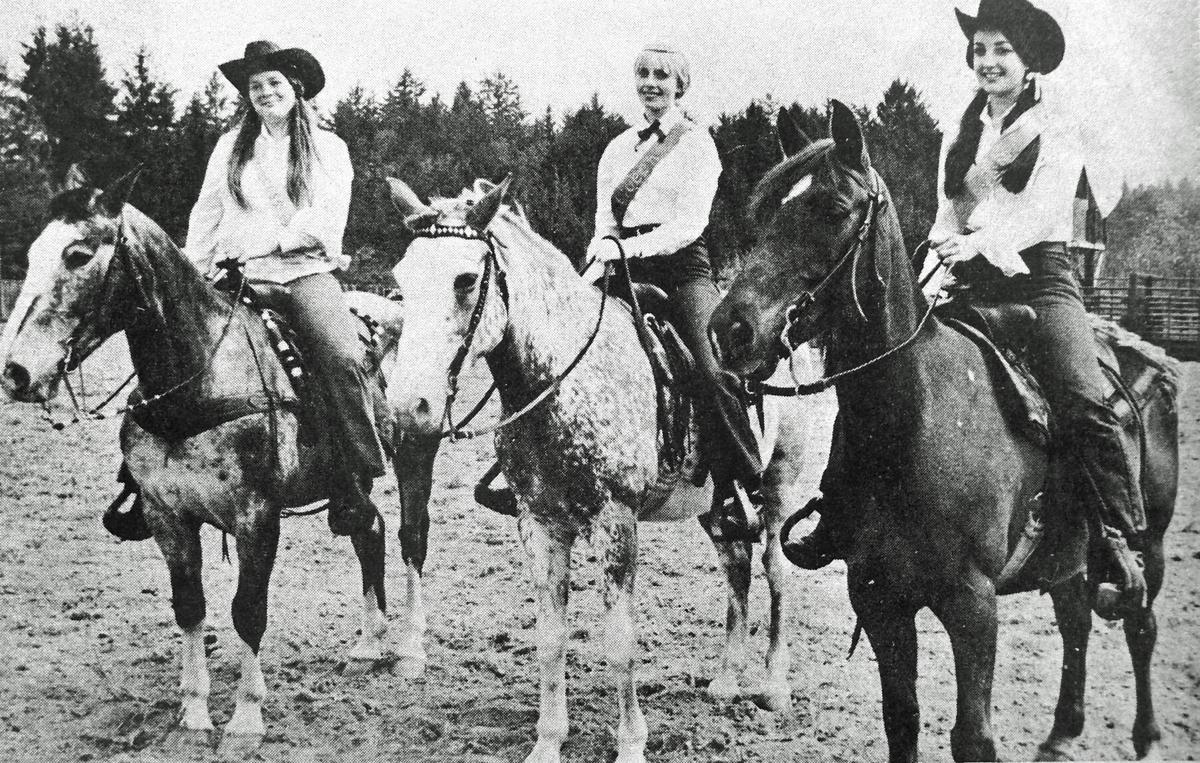 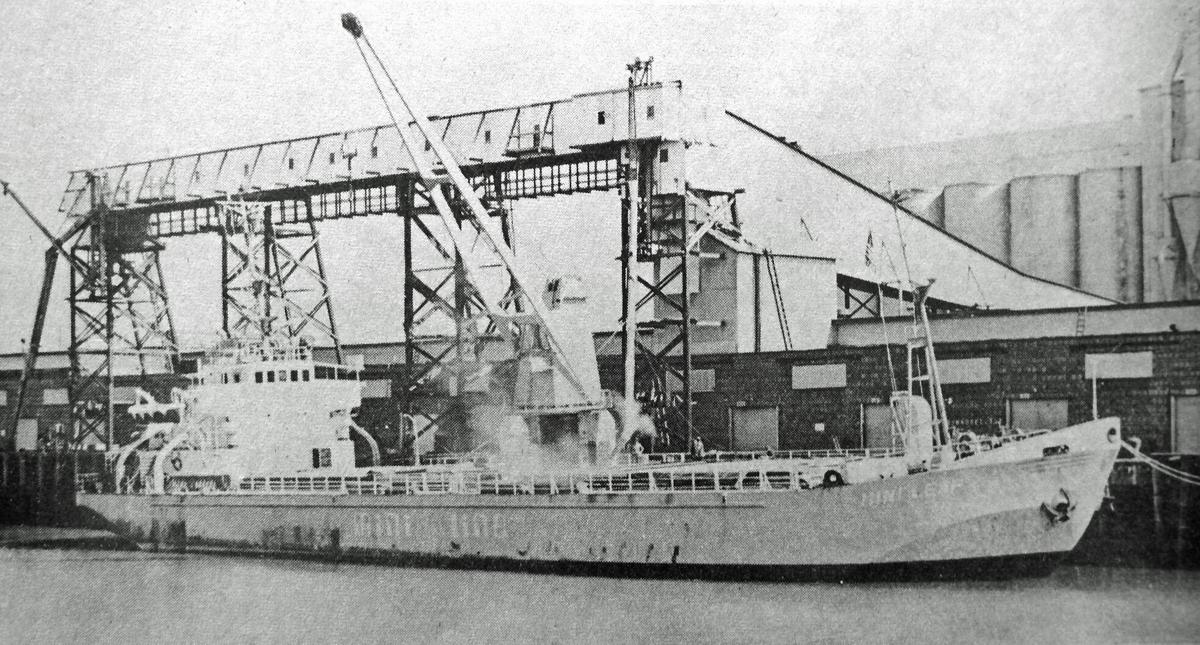 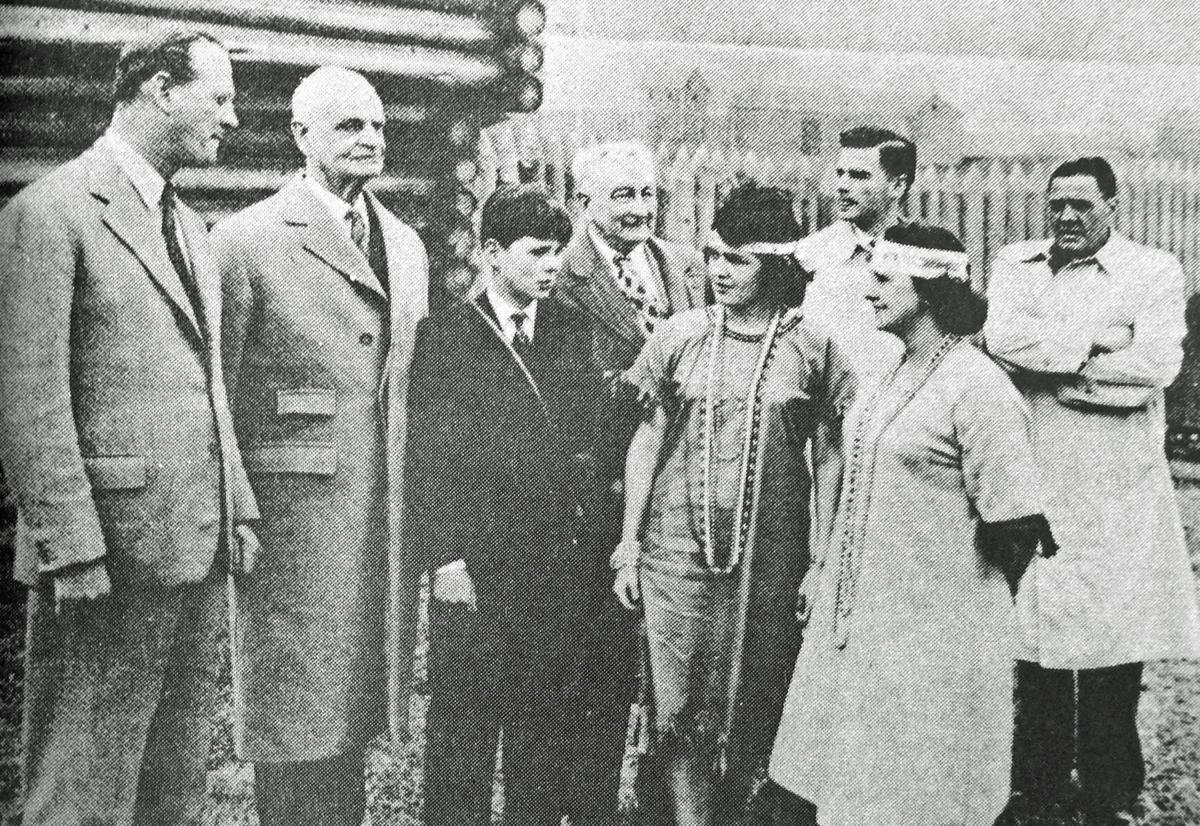 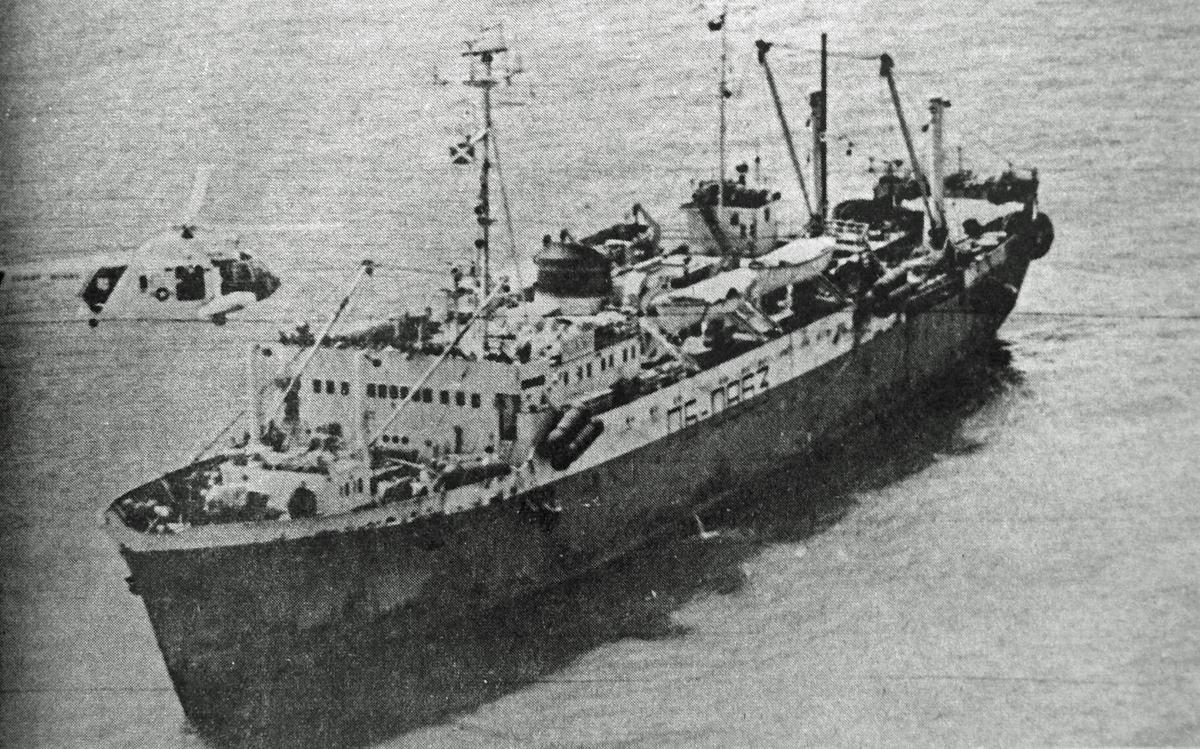 A helicopter prepares to transport Vladimiar Nuraev, who was injured after falling off a ladder on the Russian trawler Pechenga in 1971. 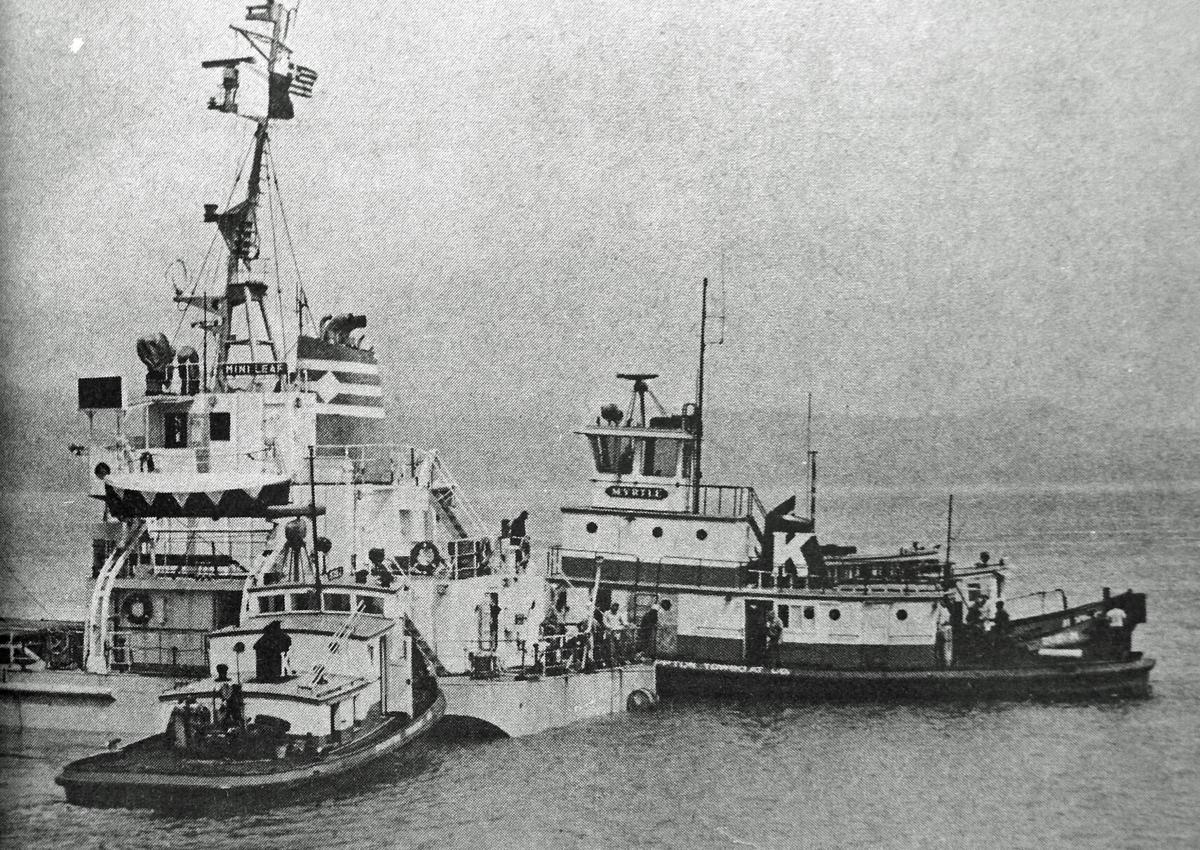 Tugboats place a marker buoy over the sunken tug Louie III in 1971. 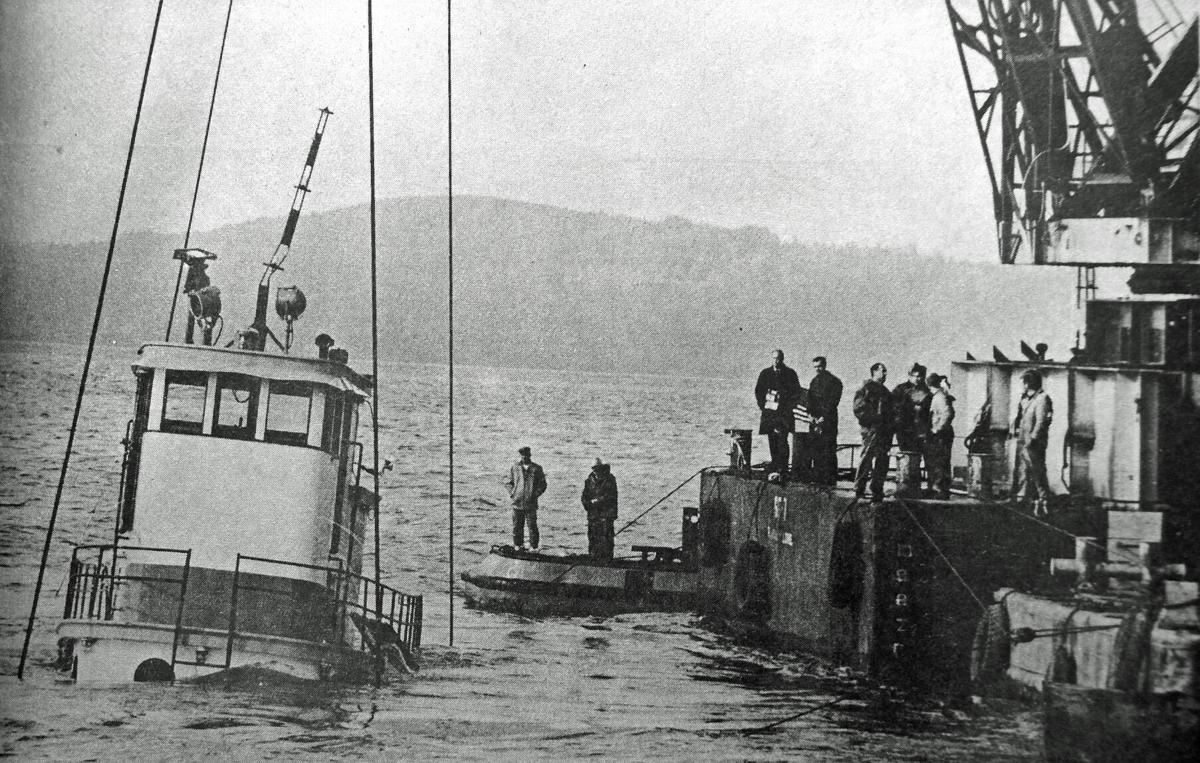 The tugboat Louie III comes up from the bottom of the Columbia River in 1971.

The Astoria Sunday Market began its season in 2011 with more than 150 vendors.

Ryan Barnes, of Portland, stands atop his 38-foot sailboat vessel, L’Orca, which was damaged by a breaching whale northwest of the Columbia River Bar in 2011.

Ryan Barnes shows off a container filled with black pieces of whale flesh, a reminder for him and his crew of the whale that breached the water and crashed into his sailing vessel in 2011.

A helicopter prepares to transport Vladimiar Nuraev, who was injured after falling off a ladder on the Russian trawler Pechenga in 1971.

Tugboats place a marker buoy over the sunken tug Louie III in 1971.

The tugboat Louie III comes up from the bottom of the Columbia River in 1971.

For Karen Eland, it was her first time as one of more than 150 vendors who lined the street on opening day of the Astoria Sunday Market.

“I love it! There are so many booths and the weather has turned out great,” Eland said as she watched hundreds of people who clogged a busy 12th Street on Mother’s Day.

CANNON BEACH — With all of the new information coming out of Japan about the damage that can be caused by earthquakes and tsunamis, should a construction moratorium be adopted in Cannon Beach?

Local resident Charles Hillestad thinks so. Until scientists can analyze the data that surprised even the experts and use it to update local building and zoning codes, a construction moratorium should be enacted, he said.

But a moratorium should go even beyond Cannon Beach and extend to the tsunami-prone areas of the entire coast, he added.

“If a house is already built, OK,” Hillestad said. “On the other hand, should we be increasing the danger (by constructing additional buildings) until we have more information?”

A real estate attorney in Cannon Beach, Hillestad is at the center of opposition involving construction on a small, vacant lot just south of his midtown home, a block from the beach.

He asked the City Council to overturn the Planning Commission’s approval to allow front-and rear-yard setbacks to be reduced by half so a two-story, 1,029 square foot house could be built on a 1,750 square foot lot. The council, however, voted unanimously to uphold the commission’s decision.

The usual lot in Cannon Beach is 5,000 square feet. But Hillestad worries that lots in the city will become increasingly smaller and housing will become denser.

Ryan Barnes and the rest of the crew on board their 38-foot sailboat had just hit their groove when it happened.

They were a half-hour into an offshore race from about 2 nautical miles southwest of the South Jetty’s tip and were heading to Victoria, British Columbia, moving quickly north into a south wind, when one crew member saw a dark mass underwater near the side of the boat, Barnes said.

In an instant, a 30-foot whale catapulted itself out of the rolling swells on the boat’s starboard side, coming out of the water almost entirely.

“It hit its head half to three-quarter of the way up the mast,” Barnes said.

The eight people on board watched from the cockpit, stunned as the whale landed atop the boat — water streaming off the massive mammal — before it rolled off and back into the sea.

It was a fluke that no one was in the whale’s path at the exact moment, Barnes said.

“It just happened that we didn’t have any issues on deck,” he said.

Salmon were scarce all the way from the river mouth to the deadline below Bonneville Dam.

Margaret Maki, 17, of Svensen, has been named Queen of the 1971 Clatsop County Rodeo. She is a senior at Knappa High School.

Nuraev, refrigeration engineer on the big Russian trawler Pechenga, fell off a ladder, cutting a gash on the back of his head and another in his back, while the Pechenga was about 600 miles off the coast.

Nuraev reached the hospital following a trip by helicopter to the U.S. Coast Guard Air Station, where he was transferred to city ambulance.

When John Jacob Astor VIII arrives in Astoria tonight with his wife, Fiona, it will have been 10 years since his last visit.

Then 14, John was here in 1961 with his parents and grandparents for Astoria’s 150th anniversary celebration. In an historic picture, John, his father, Gavin, and grandfather, John Jacob Astor V, posed with descendants of Chinook natives. The Chinook lived at the mouth of the Columbia when the first John Jacob Astor landed men to establish a fur trading post on the site of what is now Astoria. The meeting took place, along with then-Gov. Mark Hatfield, at the site of the Astor fort, commemorated by a marker at 15th and Exchange streets.

A “mini-ship,” the newly-built Greek freighter Mini Leaf of 1,586 tons, has been at Pier 1 of the Port of Astoria docks loading a full cargo 3,000 tons of wheat for Corinto, Nicaragua, the past several days.

The Mini Leaf, 214 feet long, is driven by two automatic diesel engines of 750 horsepower each that operate twin screws.

The little vessel carries a crew of nine. These include three officers, three seamen, one cook and two engineers.

Knappton Towboat Company’s tug Louie III sank in front of Samuel Elmore Cannery. Larry Morgan, a crewman, fell into the water, but was rescued, according to reports. There was no loss of life. Company officials said they did not yet have any further information.

The Louie III was engaged in towing another vessel at the time.

A first edition copy of Washington Irving’s “Astoria” was presented this week to the Astoria Library by Joseph Saari, of Vancouver, Washington. Coinciding with the visit by John and Fiona Astor, the gift is an important addition to the rare books collection of the library and a fitting way to celebrate the 160th anniversary of the founding of Astoria, said librarian Bruce Berney.

Published in 1838 in Philadelphia in an edition of 5,000, time has considerably reduced that number. Saari purchased the present two-volume book in 1950 from a Yakima, Washington, bookstore which had burned. The volumes miraculously escaped with little water damage.

Capt. E.F. Galkpen, general inspector of the 13th naval district, was the third high-ranking naval investigator of U.S. Rep. Walter Norblad’s charges of food wastage in Astoria to visit the city. He came down from Portland and is expected to return there soon to continue investigations he was making in that area. Admirals Van Hook and D.W. Mitchell continued interviewing naval personnel and completed plans to visit junk dealers and any other individuals they can locate who have salvaged materials cast away by the Navy at the city dump.

Northwest industrialists and civic leaders had a firm warning that a power shortage had already evidenced itself north of the Puget Sound and that there would be severe shortages throughout the Bonneville Power Administration system until 1952 at the present rate of generator installation and dam construction.

With naval vessels coming in from sea for decommissioning at a rapid pace, there were 84 such craft in the Astoria harbor today, naval authorities reported.

Ten vessels were at anchor in the stream off Astoria’s waterfront. The rest moored at the naval station at the port terminals.

Sixteen classifications of naval vessels, mostly auxiliary craft and landing vessels of different types, were included in the 84 ships. In addition, there are other vessels moored temporarily in Portland’s harbor.

Decommissioning is proceeding steadily, with 60 ships at a time undergoing the process.

The first action to restore the Astoria airport to civilian control was taken Tuesday night by the Port of Astoria Commission in passing a motion which requests the U.S. Navy to declare the airport with all its facilities as surplus.

Request that the U.S. Navy have the cruiser Astoria visit its namesake city on May 30 and May 31 instead of June 10, as is scheduled, will be made through U.S. Sen. Guy Cordon by the Chamber of Commerce.

Chamber officials wrote Cordon today asking for the changed dates to permit the cruiser to participate in Memorial Day observances in Astoria. The chamber is planning an extensive observance on Friday the 31st in conjunction with local naval authorities.