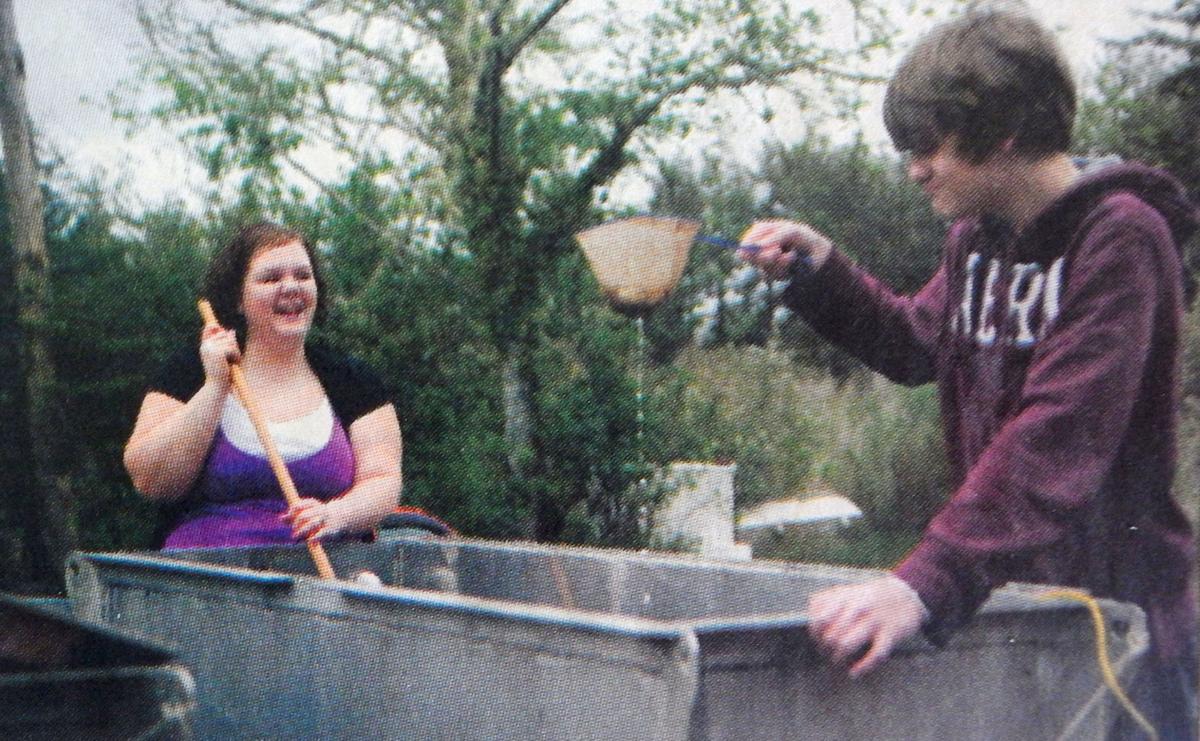 Warrenton High School student Joanna Dodson, left, gets a laugh as classmate Tyler Porter scoops out dead coho and fall Chinook in order to reclaim tiny passive integrated transponders, or pit tags, before releasing the fish into the Skipanon River in 2010. 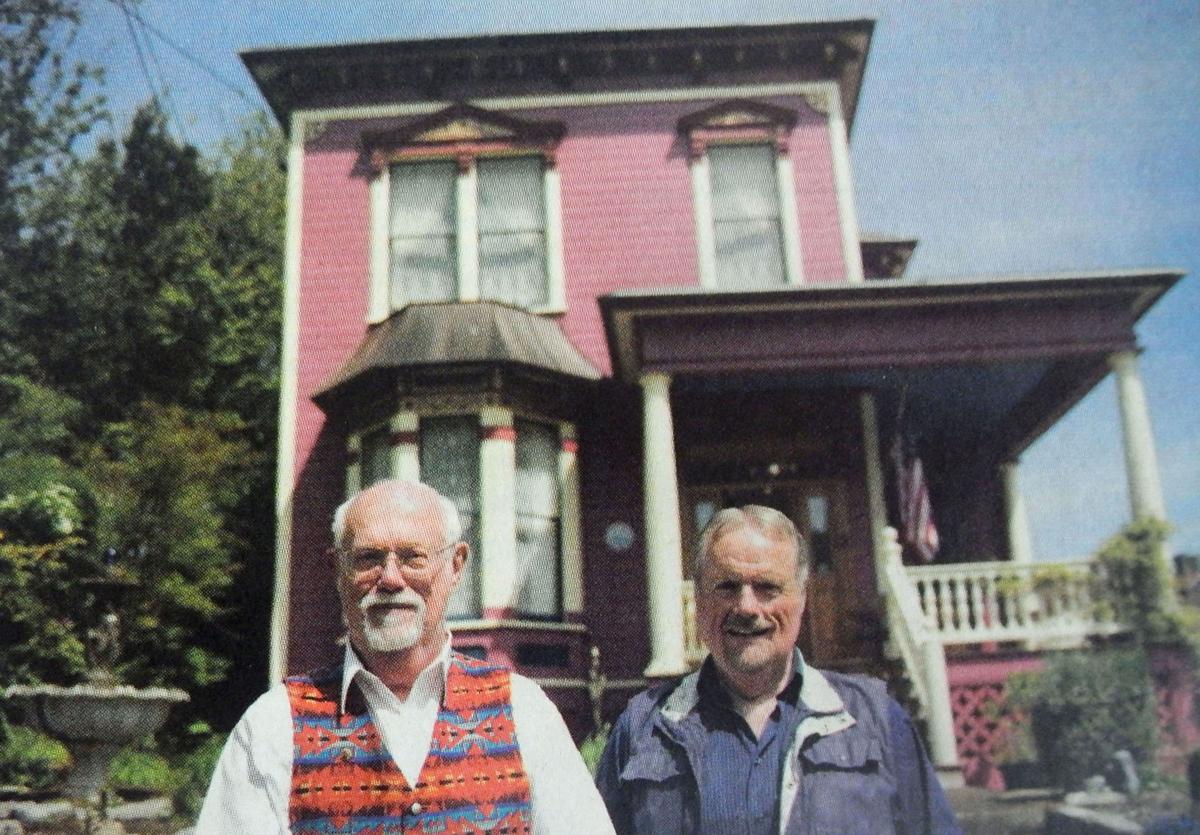 Roger Johnson and Bob Girrard received the Dr. Edward Harvey Historic Preservation Award in the residential division in 2010 for restoring their home at 1064 Harrison Ave., built around 1880. 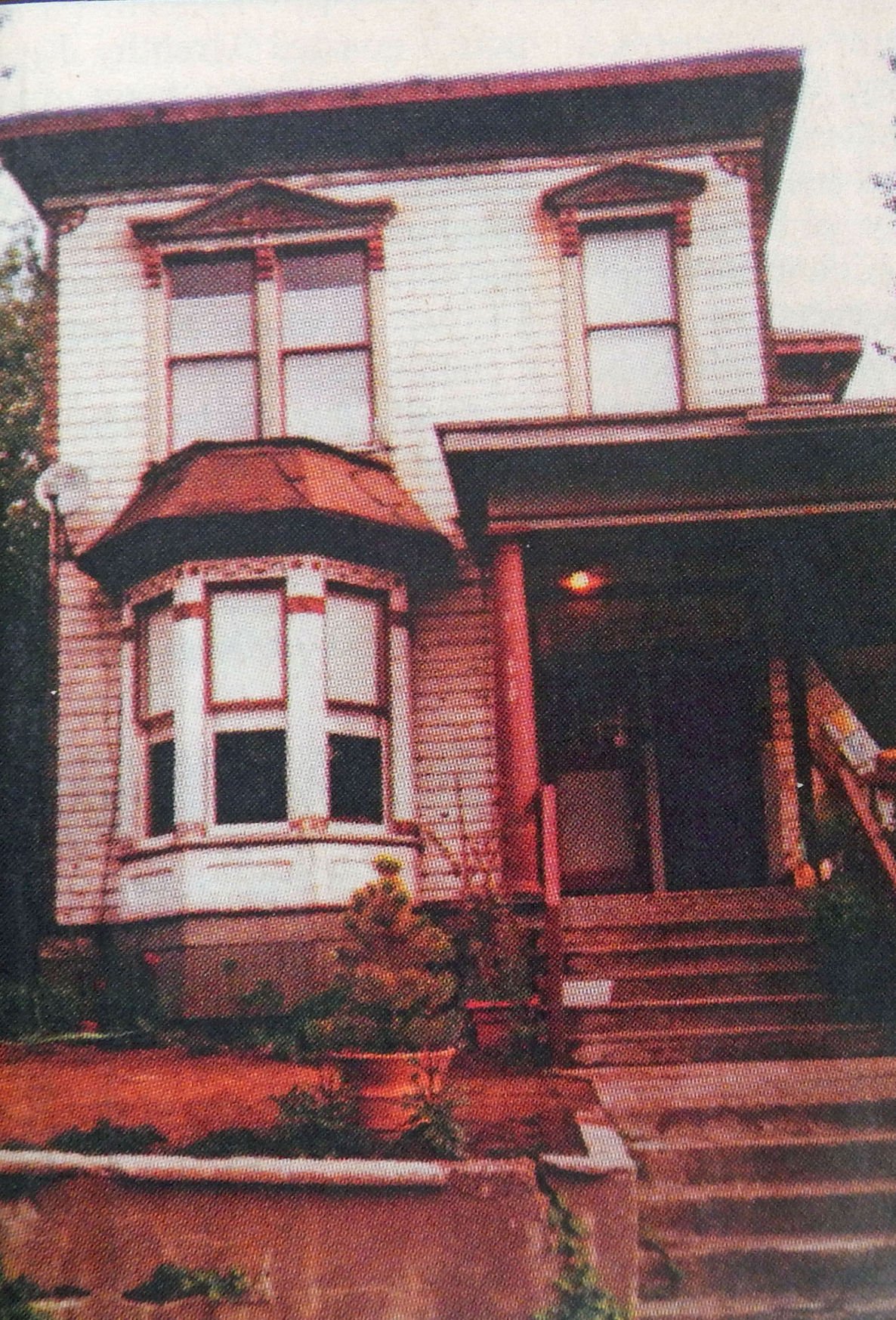 Roger Johnson and Bob Girrard’s house at 1064 Harrison Ave. early in their restoration effort in 2002. 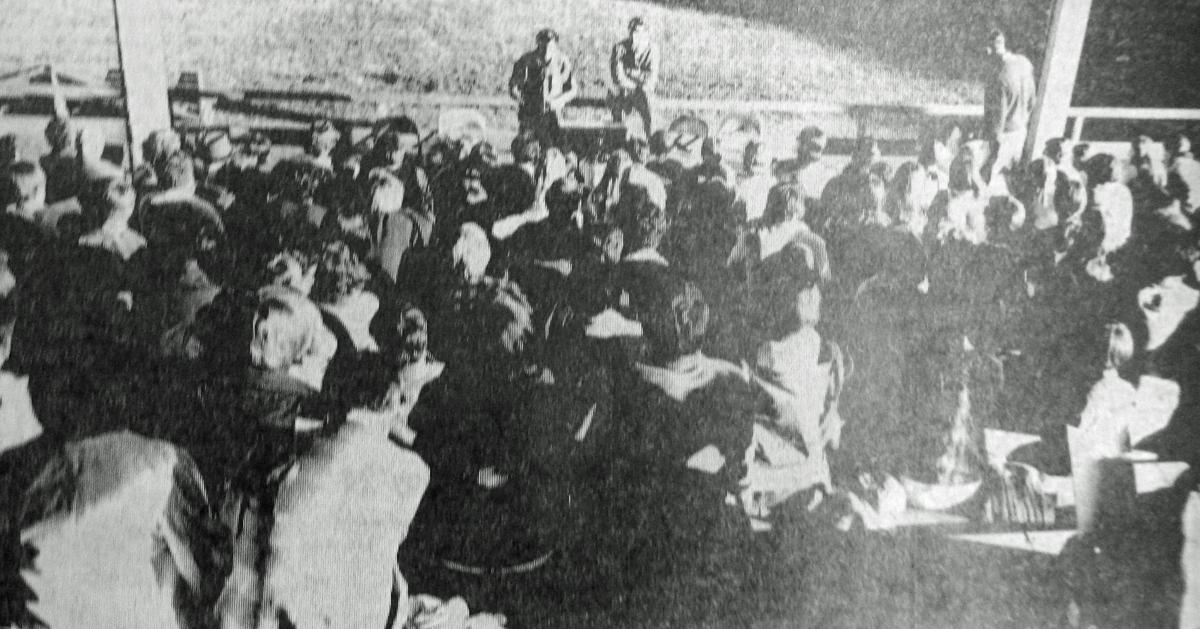 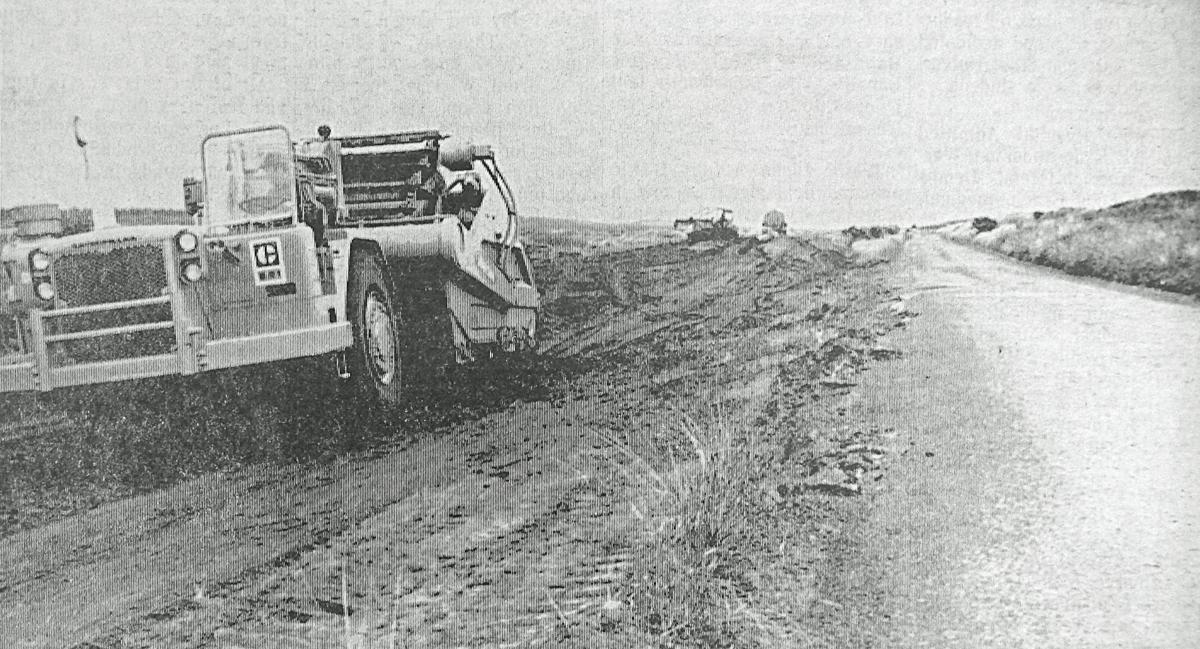 Construction West works on construction of a new road from Battery Russell to the South Jetty at the Columbia River entrance in 1970. 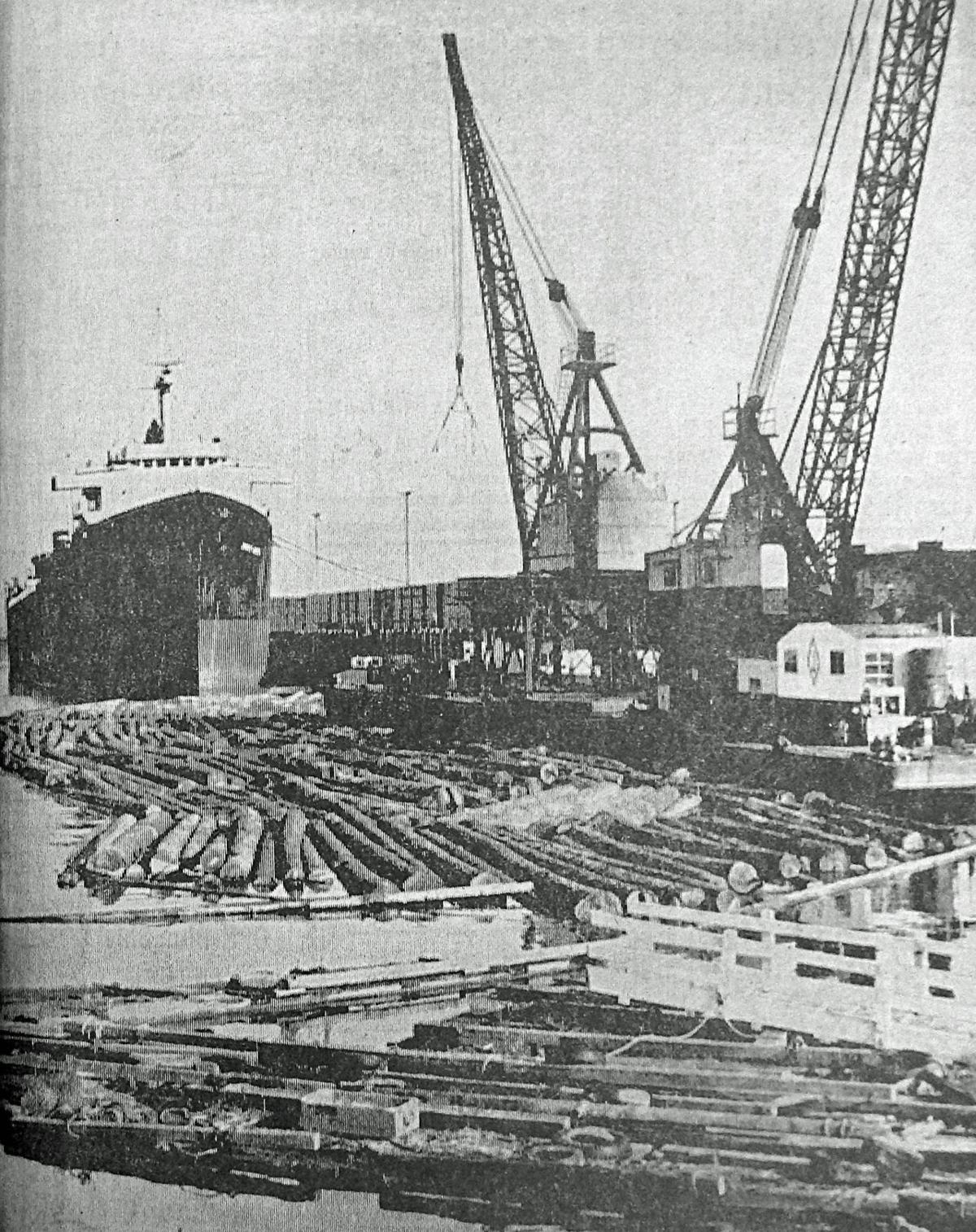 Labor disputes idled ships at the Port of Astoria in 1970.

Warrenton High School student Joanna Dodson, left, gets a laugh as classmate Tyler Porter scoops out dead coho and fall Chinook in order to reclaim tiny passive integrated transponders, or pit tags, before releasing the fish into the Skipanon River in 2010.

Roger Johnson and Bob Girrard received the Dr. Edward Harvey Historic Preservation Award in the residential division in 2010 for restoring their home at 1064 Harrison Ave., built around 1880.

Roger Johnson and Bob Girrard’s house at 1064 Harrison Ave. early in their restoration effort in 2002.

Construction West works on construction of a new road from Battery Russell to the South Jetty at the Columbia River entrance in 1970.

Labor disputes idled ships at the Port of Astoria in 1970.

Listen to Warrenton High School senior Joanna Dodson talk about fish and you’ll learn a bit about what it takes to look after a slew of them for a whole year. She and her classmates have spent the year scrubbing, feeding and working seven days a week — nurturing their own share of tiny salmon babies until they’re ready to survive on their own.

Though the salmon’s spring departure marks the end of Dodson’s work with fish for now, she’s learned to love coming to the concrete building perched on the Skipanon River right next to the high school.

“I took a lot of pride in my coho,” she said last week, looking over the tubs that spring with brackish water piped in from the river.

The school’s fisheries class is a hands-on project that allows students to raise fish from eggs, learn about their migration patterns and understand what it might take to get them to return to the Skipanon.

You can’t miss the deep rose-colored house at 1064 Harrison Ave. Actually, the paint color is Old Claret, Roger Johnson explained Friday, as the house fairly glowed in the sunlight. Johnson and his partner, Bob Girrard, took the local landmark from shabby to gorgeous after purchasing it in 2001. Their handiwork was recognized Monday with the 2010 Dr. Edward Harvey Historic Preservation Award in the residential division.

In the commercial division, the 2010 Harvey award went to Mitch Mitchum and Rosemarie Paavola, of Luottamus Partners, for restoring the Sanborn Building at 951-957 Commercial St. The downtown building was severely damaged in the 2008 Thanksgiving fire.

So few people are traveling by air from Astoria to Portland and back that SeaPort Airlines is cutting back the number of daily flights.

Effective June 1, the airline will offer two flights a day instead of three. An additional flight will be added to the daily Portland to Newport route.

John Lansing, representing the airline, gave details to the Port of Astoria Commission Tuesday night. He also said the company is switching planes from the Pilatus PC-12 to a Cessna Caravan as a cost-saving measure. The new plane is also a nine-seater, but the passenger cabin is not pressurized during flights.

Two ships were idle at the Port of Astoria this morning, another left over the weekend, and still another remained anchored in the Columbia River, awaiting berthage, as longshoremen here and in other Columbia River and Oregon coastal ports continued indefinitely stop-work meetings stemming from a jurisdictional dispute in Portland.

Approximately 4,000 longshoremen from Northwest and California ports met in Longview, Washington Saturday and voted by unanimous action to invoke a grieved port procedure for every port in the area.

A leader of Friday night’s “Peace in Cambodia” rally in Astoria said today he was “gratified by the large attendance” — some 350 persons who gathered at Gyro Field.

Gene McIntyre said he thought “This large group expressed considerable interest in the Clatsop area regarding immediate pullout from Cambodia.” He said the response to remarks about the scheduled shipment of nerve gas to Eastern Oregon was “grave interest.”

For theatergoers enjoying lighthearted farce, “Arsenic and Old Lace,” performed last weekend and scheduled for this weekend at the Lewis and Clark Civic Theater, is a success.

Audience response was enthusiastic Saturday evening when more than 80 persons viewed the merry farce about murder and mercy-killing.

The director is Bunny Doar, of Seaside.

What creates an entertaining dramatic experience out of a superficial, dated and meaningless plot are the funny lines, a series of artificial surprises (experienced by the actors, not the audience) and the relatively fine acting of the 14 persons who devoted two months of rehearsal to the production.

An influx of job seekers, lured by an oil boom, has created an unemployment crisis in Alaska, says U.S. Sen. Ted Stevens, R-Alaska.

Unemployed residents of the lower 48 states are rushing to Alaska to find no jobs and add to existing employment problems, Stevens said in an interview.

Now Alaska, which traditionally has welcomed newcomers, is urging job seekers to stay away until they have nailed down work in the northern state.

The Navy’s motor minesweeper YMS-103, reported sunk off Okinawa and described in the Washington release Monday as a “Tacoma-built craft,” was actually built by the Astoria Marine Construction Co. here, and was the fourth in the local yard’s first series of four minesweepers, President Joseph M. Dyer said today.

The ship was launched on Aug. 29, 1942 into the Lewis and Clark River after having been christened by Mrs. Clair Mansker, wife of the yard superintendent. The ship was placed in commission Sept. 19, 1942 and under command of Lt. James Wilson, of Seattle, now a lieutenant-commander in command of a destroyer escort.

The YMS-103’s sister ship YMS-100, has returned to Astoria, to be repaired and overhauled by the AMCCO yard which built her.

Hermie William Sherid, self-styled explorer and naturalist and incidentally a resident of Clatsop County 25 years ago, arrived here this week in quest of a quiet spot in which to settle down and write a book on his travels.

Sherid said that he had spent about half of the past 20 years in South American countries, most of the time far from civilization in the mountains and jungles, and is sure that he has the material for an interesting story.

Immediately after the First World War, Sherid came to Astoria and purchased a portion of the old Grimes place in the Youngs River district. He lived on the place but six months and then started out on his long trek that has since carried him all over the world.

The Red Cross here called today for more volunteers in the surgical dressings department, saying that about twice as many workers are needed as have been helping this work in past weeks.

Mrs. Ward Quarles, chairman of volunteer services, said that the supply of materials on hand and the demand for dressings necessitates production of 1,000 dressings daily here. The Clatsop chapter makes dressings for the local Navy hospital as well as for the regional Red Cross, which fills Army needs elsewhere.

A Navy fighter plane from the Astoria naval air station airport made a forced landing about 10:20 a.m. today on the beach between Camp Clatsop and Sunset Beach. Its pilot, Lt. (jg) Yates Hickey, escaped without injury, naval officials announced this afternoon. The aircraft suffered minor damage and will be recovered by Navy crews, according to the announcement.

This jawful of a title labels the new school that is aiding the Navy’s fleet of mariner bombers patroling the sink or swim approaches of Tokyo.

The Tongue Point school further represents the Navy’s guarantee that only the best technicians will be patching shrapnel holes and checking the gull-winged boat’s physique.