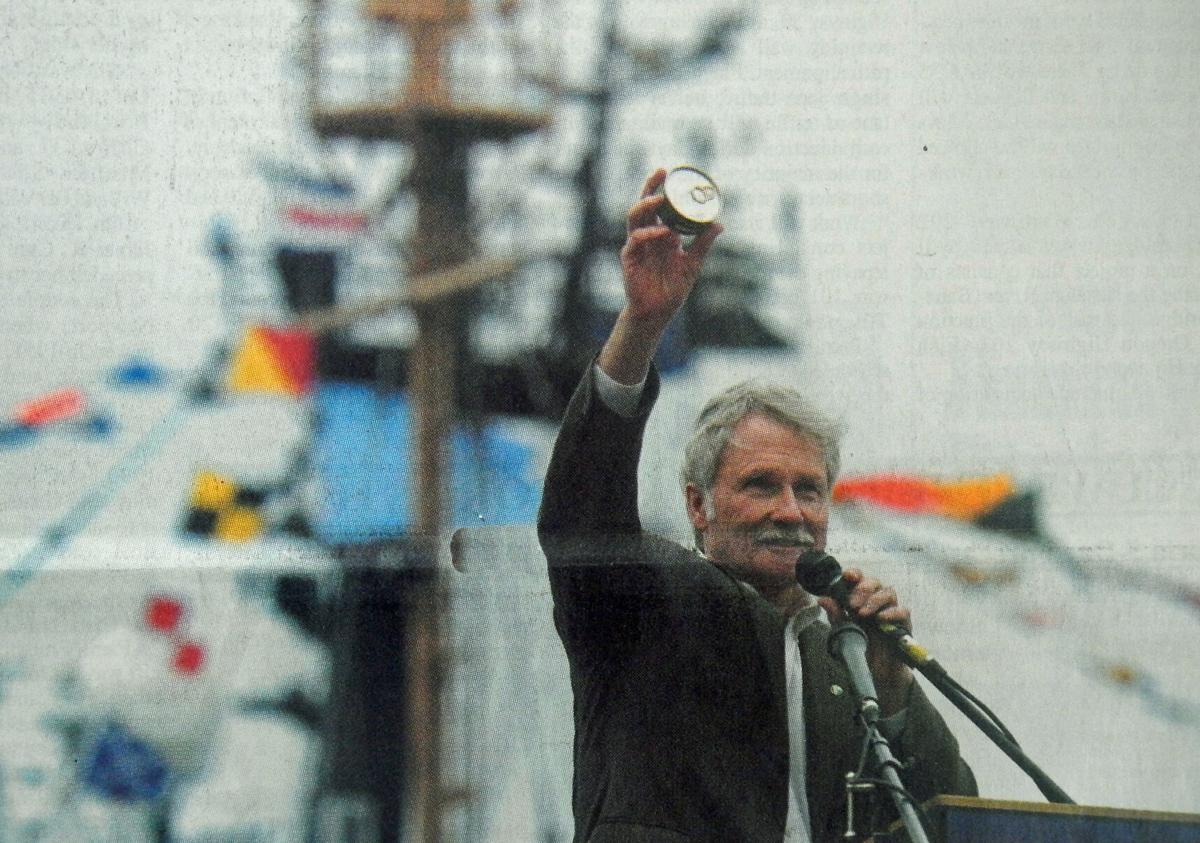 Former Gov. John Kitzhaber speaks outside the Columbia River Maritime Museum as part of the opening ceremony of the Astoria bicentennial in 2011. 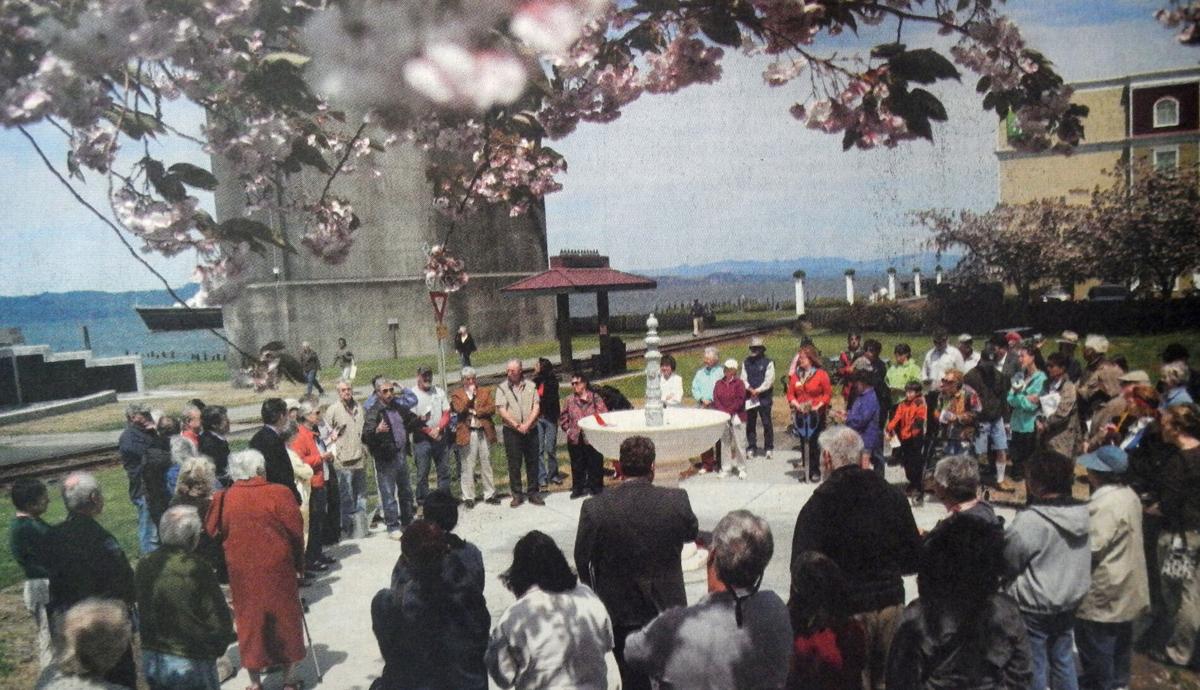 A crowd of about 75 people gathered for the dedication ceremony for the 105-year-old Shively Fountain at its new location underneath the Astoria Bridge in 2011. 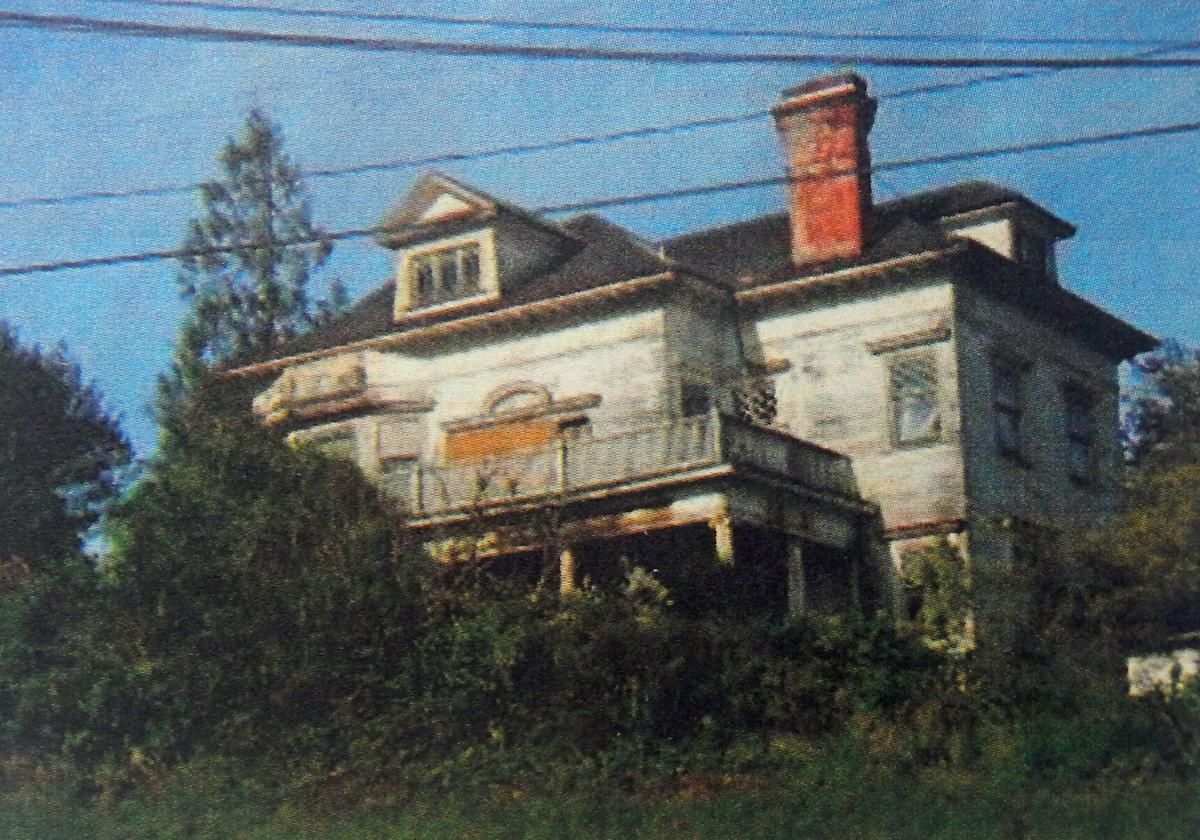 The George Conrad Flavel property in 2011. 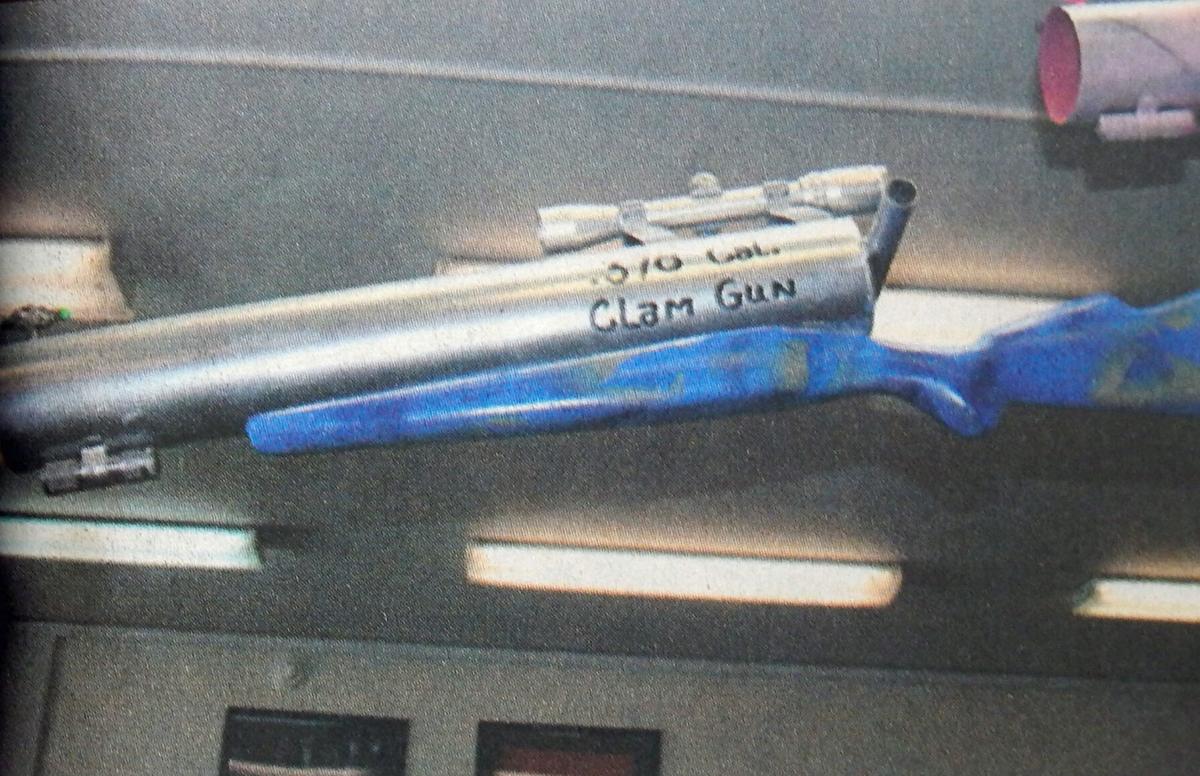 A clam gun from Bulldog Firearms & Supply in 2011. 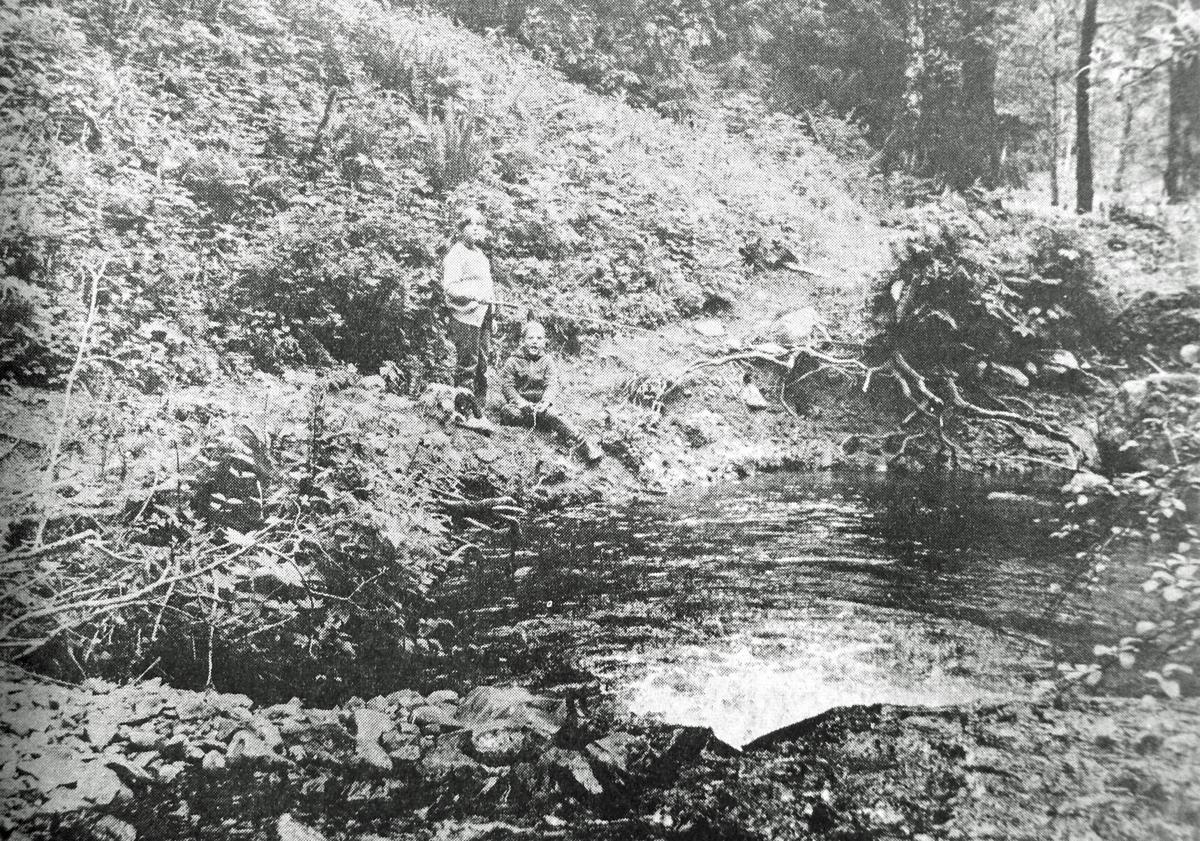 The opening of the 1971 fishing season on coastal streams attracted these two youngsters to the quiet serenity of the Fishhawk Falls Park near Jewell. 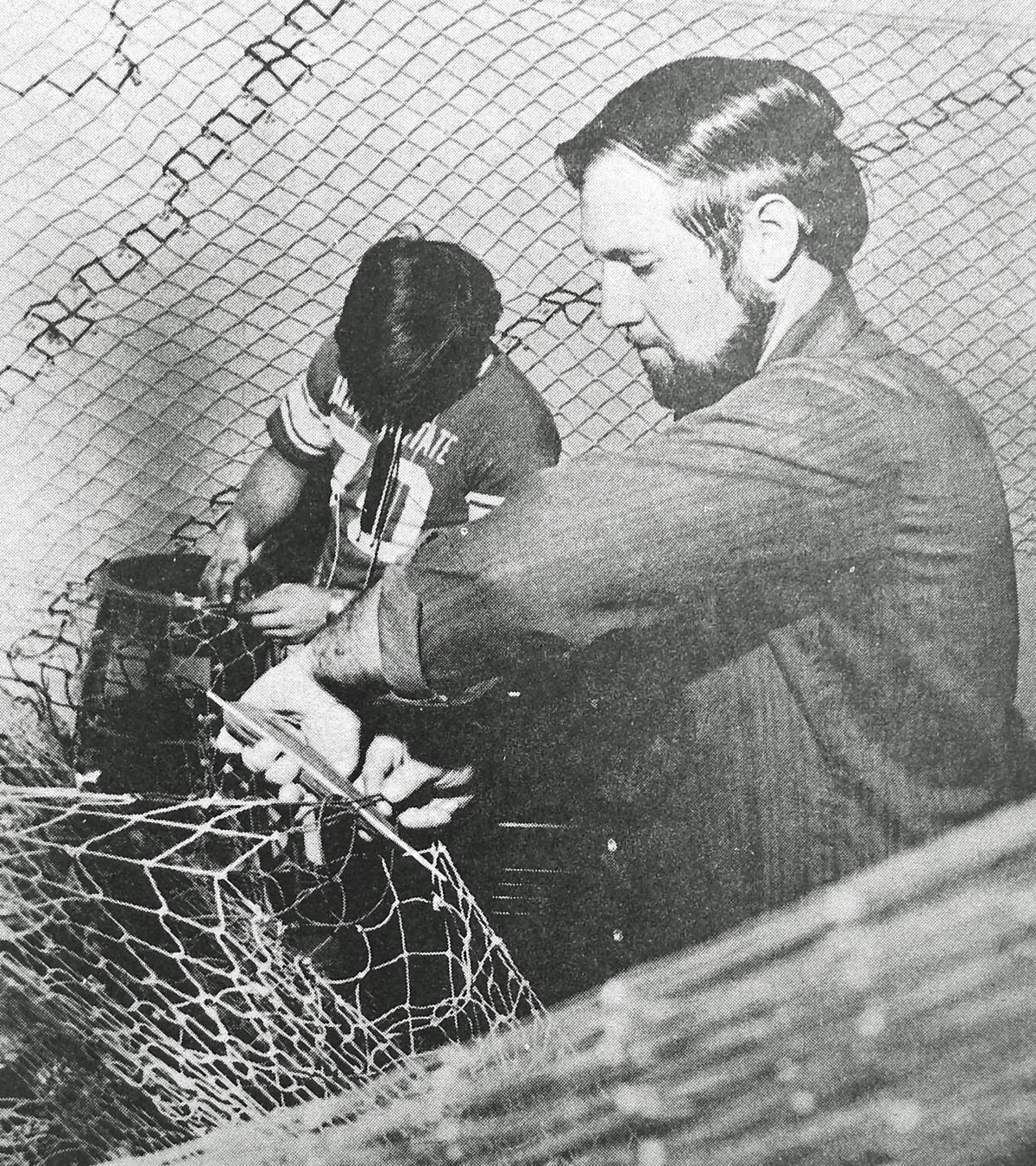 Former Gov. John Kitzhaber speaks outside the Columbia River Maritime Museum as part of the opening ceremony of the Astoria bicentennial in 2011.

A crowd of about 75 people gathered for the dedication ceremony for the 105-year-old Shively Fountain at its new location underneath the Astoria Bridge in 2011.

The George Conrad Flavel property in 2011.

A clam gun from Bulldog Firearms & Supply in 2011.

The opening of the 1971 fishing season on coastal streams attracted these two youngsters to the quiet serenity of the Fishhawk Falls Park near Jewell.

And everyone who attended acknowledged it’s a special place.

“This is huge history we’re a part of,” Kitzhaber said. “This is exciting to be here on the 200th anniversary of the community that is really the cradle of the American West. If it weren’t for Astoria, Oregon and Washington and Idaho would probably be part of Canada today.”

Kitzhaber credited Astoria for being a community of firsts, introducing the first post office in the West, the first customs officer, the first public school district in Oregon and the first to introduce the “all-American tuna fish sandwich.”

It’s 105 years old, but next to the water at Maritime Memorial Park, it beams like new.

That’s because it has finally been welcomed home. A place, it seems, that it was meant for.

It’s the Shively Fountain, a gift from the Astoria Women’s Club to Astoria in 1906.

During the last 100 years, the fountain has been called different names, placed in different settings and was eventually abandoned in a field.

But found, cleaned up and restored — thanks to a donation from Pacific Power and sculpting by North Coast artist Paul Gillum — the fountain is again bright.

“This is a great day for Astoria,” said Mayor Willis Van Dusen.

The dedication of the Shively Fountain was held under the Astoria Bridge. Approximately 75 people came out to see the restoration work.

“Are we going to let this piece of our history rot in place?” Patrick and KC McGee asked the Ear rhetorically, speaking of the moldering Flavel home on the corner of 15th Street and Franklin Avenue.

“Although the nearby home of Capt. George Flavel is better known, this is a Flavel house, too. It was built by Capt. Flavel’s son, George Conrad Flavel.

“The house is currently unoccupied and neglected,” the couple said. The Ear has often heard the house referred to as “the haunted house.” Many tourists speak of it in hushed, awed tones. It does look mighty spooky, no doubt.

“Yes, there really is another Flavel house in Astoria and what’s happening to it, to some, is almost criminal,” the McGees assert, especially in a place that prides itself on its architectural and cultural history, and now has just started its bicentennial celebration.

“Jerry notes, however, that he is unable to supply ammunition, so clammers have to bring their own,” Duke said.

“The gun shop owner put real gun parts on a clam gun as a spoof,” Bob added. “Sometimes, though, he actually finds people who think it is for real.”

A spokesman for Bumble Bee Seafoods said the worldwide company is “checking carefully” on the mercury content of tuna caught in the tropical Pacific and said Bumble Bee would check on the albacore tuna caught off of Oregon, too.

Ted Bugas said the albacore appeared “quite safe” regarding mercury but said it would be examined. He said tuna is being checked in its raw or frozen state before and after canning.

He said the size of the tuna apparently has a good deal to do with the mercury content, and said the bigger, older tuna have the most mercury. Bumble Bee is rejecting the big, old tuna, he said.

Spokesmen for a coalition of conservation groups said today that nitrogen supersaturation threatens the extinction of salmon and steelhead in the Snake and Columbia rivers. They called for President Richard Nixon to order a moratorium on all present and future dam construction until the problem is solved.

JEWELL — It doesn’t have a post office and it never had any form of city government yet the town of Jewell maintains a place on most Oregon maps and is designated by various highway signs. Though through the years the town has had various stores, service stations and taverns, its only large business was a hotel, which was destroyed by fire in 1925. The hotel had been built several years previous to that by James Mason. At the time it also housed the town’s post office, which also no longer exists.

Jewell, as a named spot, came into existence in 1875, when the area’s first postmaster selected the last name of then Postmaster General Marshall Jewell as the nomer to the area. That first post office was located on Red Bluff Road.

Net tying and net mending is an art heretofore handed down from generation to generation. It is being taught in college classes at Clatsop Community College during winter term. Two sections with 22 students meet three times a week to master the skills of hanging and repairing trawl and gillnets and splicing ropes and cables.

The classes are building a complete trawl net with a design new to the area. The net is being tried out on the Margaret A., skippered by Richard Baird, of Astoria.

Twenty ships will arrive Tuesday from Pearl Harbor for deactivating and decommissioning at the Astoria naval station. This is the greatest number of vessels to reach this station in any one day. Monthly arrivals have averaged about 65 ships. A large number of ships coming occurs when the station’s personnel has thinned out with many men being discharged.

Eleven of the vessels arriving will be landing craft support ships. One will be a landing craft infantry. Three are mechanized landing ships. Three patrol craft will be in the convoy.

While the ships may not carry their full crews, they are manned by more than 1,000 officers and enlisted personnel.

There will be no parade in Astoria to mark the first peacetime Memorial Day ceremony in five years.

This decision was reached last night when representatives of the two largest veterans groups called a meeting of representatives of all groups which might have participated. Representatives of the American Legion and the Veterans of Foreign Wars said the Memorial Day program had received tardy attention on their parts. But their efforts to prepare a parade program failed in a meeting at the VFW club. After weighing the strength of potential parade groups, they were forced to abandoned the march plan for lack of cooperation, they said.

The government has ordered bakers to cut the size of bread loaves and rolls starting Saturday.

Loaves will be 10% smaller by weight and probably somewhat flatter. The price will remain the same.

The City Commission voted Monday night to spend Astoria’s road district and state gasoline tax money to replace the present Irving Avenue bridge near 19th Street with a steel and concrete structure. The commission did not evolve a definite policy for financing future street repair work.

A delay in obtaining materials has slowed down the building of fishing boats at Bay City where a number of local drag boats and tuna clippers have been constructed.

After working a full year on the 48-foot tuna and crab boat Barracuda, the boat will be launched within the next three weeks. Clarence Sessions, who with his son, Keith W. Sessions, own the shop, is acquiring materials for building a 64-foot drag boat for Ralph Mason, a well-known local fisherman.

Early-rising Astorians will be able to take their first look at the city’s namesake cruiser, the USS Astoria.

The Astoria, bound for the Portland Rose Festival and a later one-day stay in Astoria, will arrive in the Columbia River and will proceed upriver without stopping here.

The Civil Aeronautics Authority has received several applications for commercial air service franchises in Astoria but will probably take no action until after the U.S. Navy reaches a decision as to the future of its air station here, according to Ed Parsons, KAST manager and airplane pilot.

Parsons was in Seattle this week and conferred with Civil Aeronautics Authority officials there.

Parsons said he was informed that two mainline air services will likely ultimately be allowed to establish feeder services into Astoria.

Parsons also flew to Port Angeles, Washington, where members of the Sportsman Pilots Association of the Northwest made a weekly breakfast flight last Sunday. He said that upwards of 60 planes flew into the Port Angeles airport, making a spectacular sight. The group will make a breakfast flight into the Seaside airport next Sunday morning.