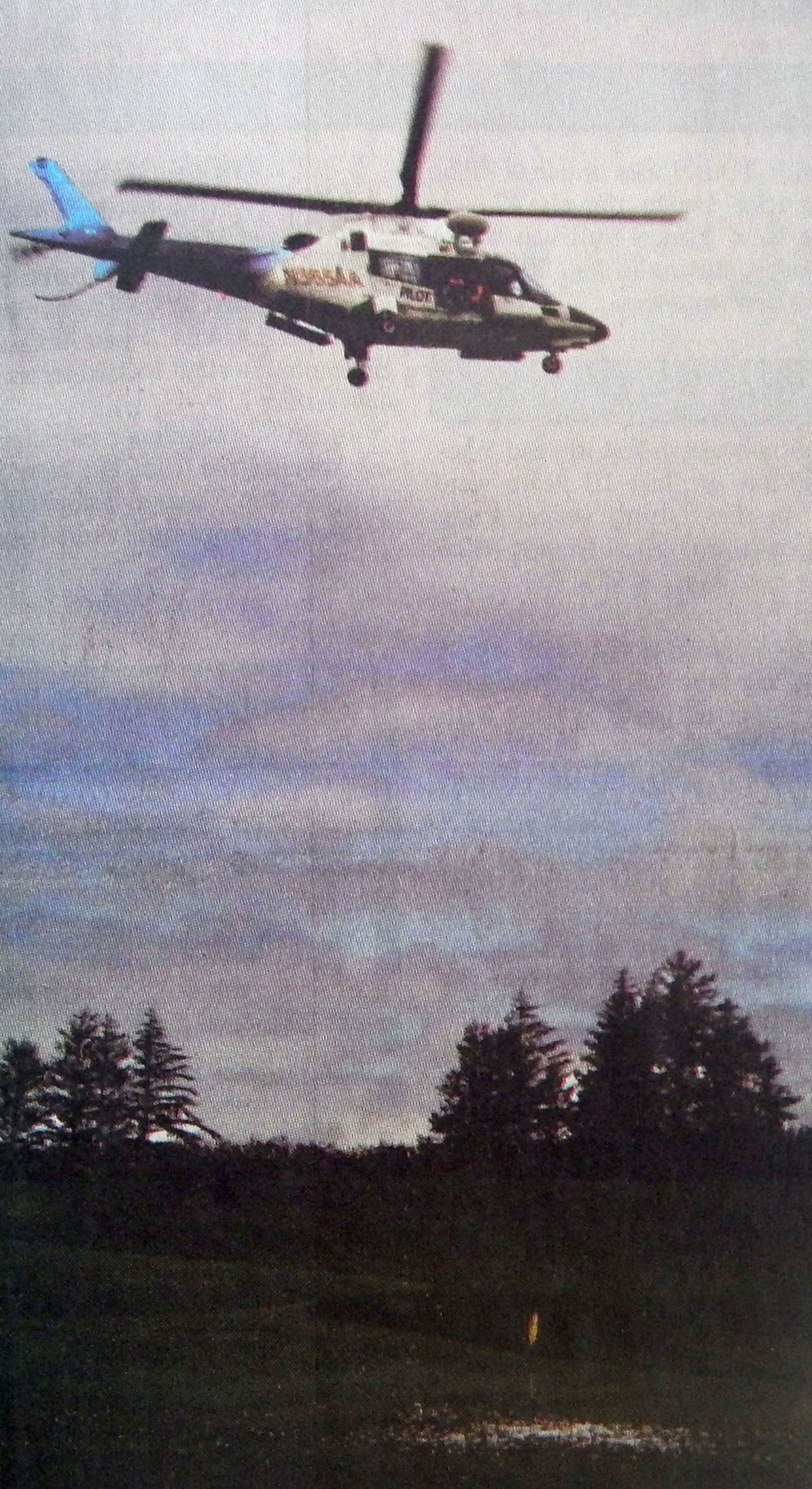 The Columbia River Bar Pilots helicopter drops 1,750 golf balls onto a green at the Astoria Golf & Country Club as part of a fundraiser for the Assistance League of the Columbia Pacific in 2010. 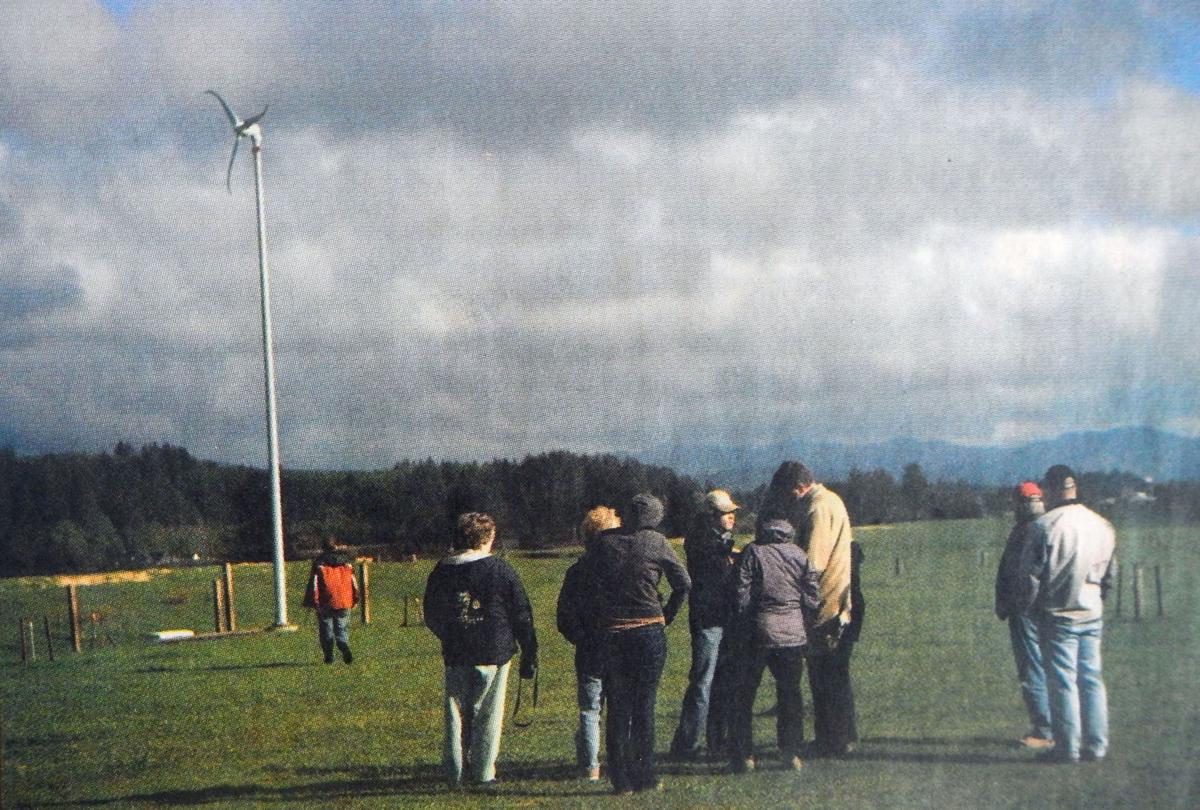 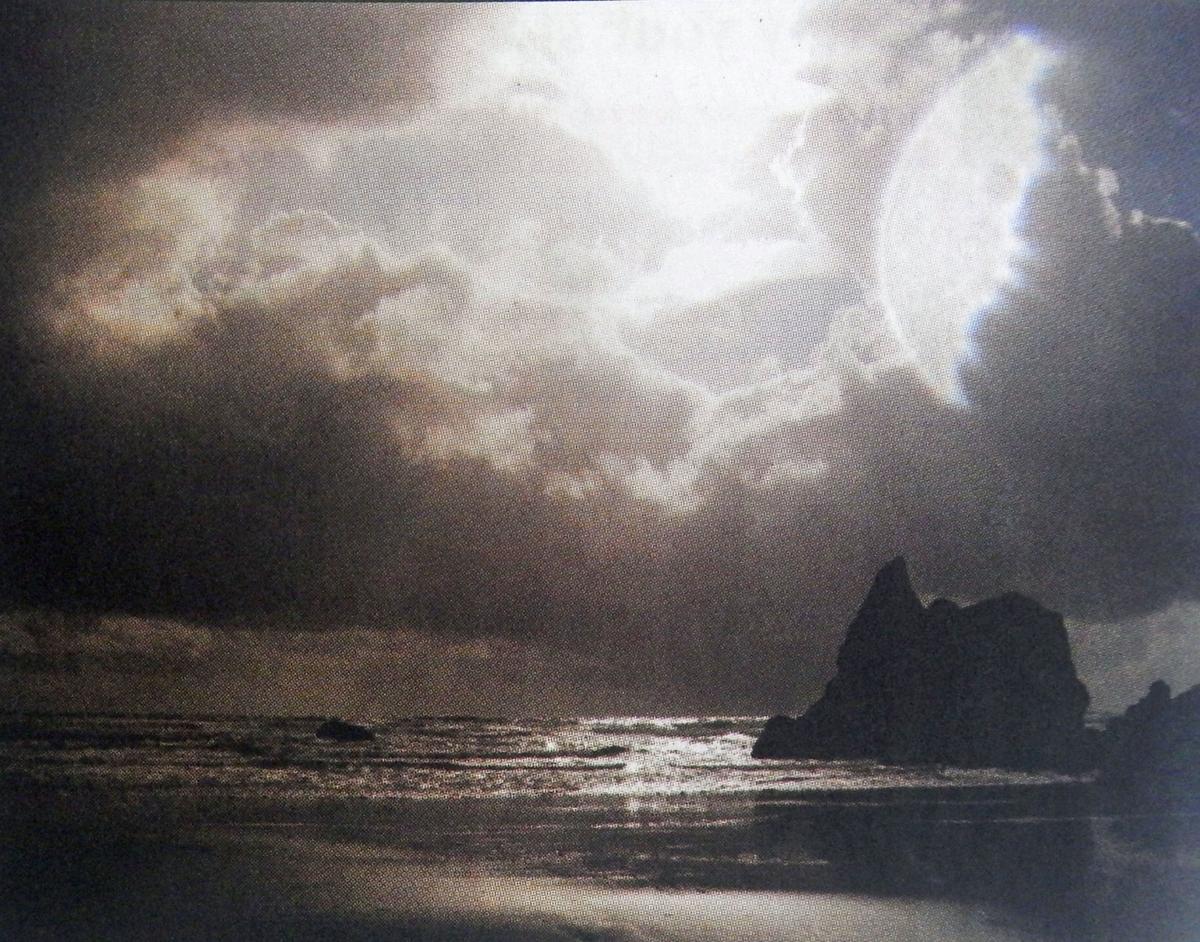 The image, ‘Arcadia Fantasy,’ captures the reflection of the sun at Arcadia Beach in 2010. 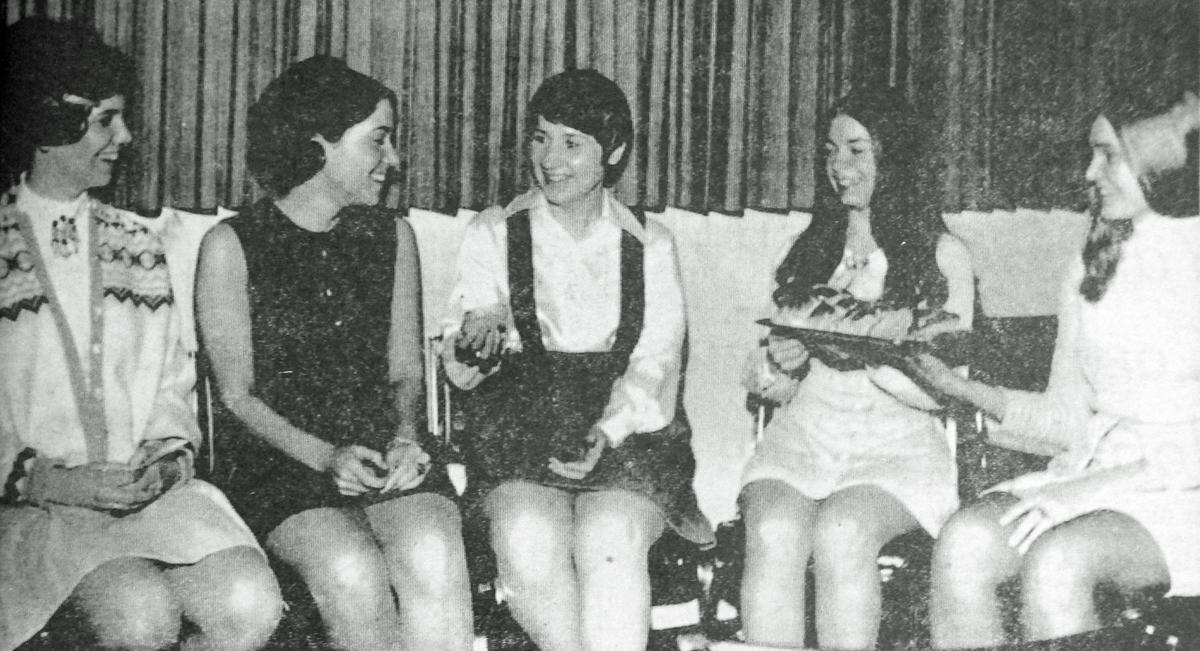 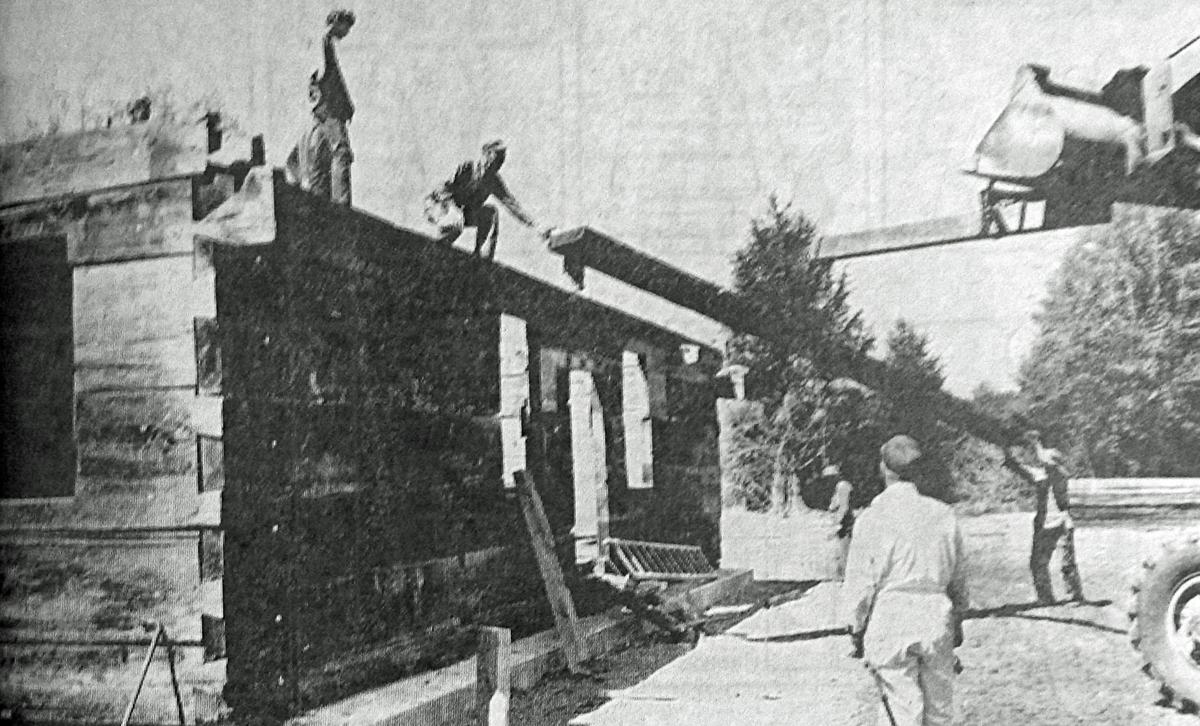 The hand hewn Finnish Lingdren log house, built in the early 1900s near Seaside, is speedily being resettled at the south end of Cullaby Lake in 1970. 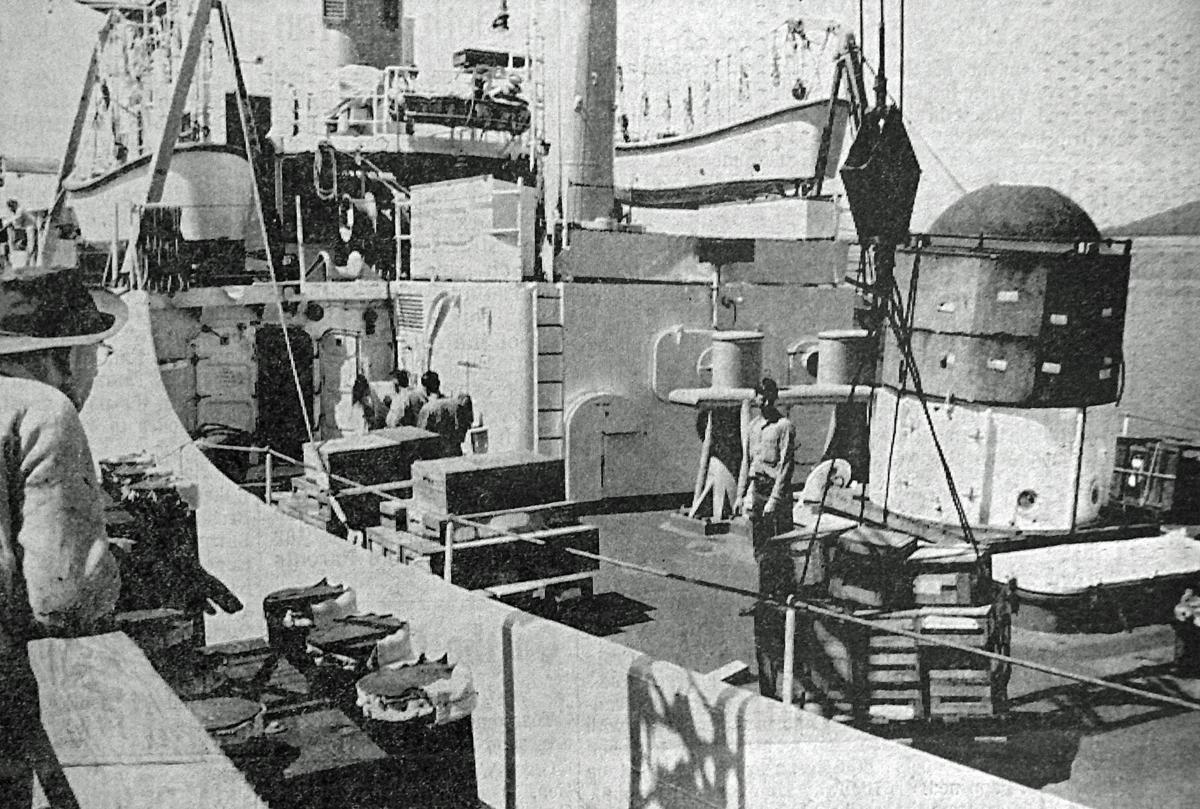 Portions of a huge lighthouse lens are unloaded from U.S. Coast Guard cutter Yocona for the Columbia River Maritime Museum, after being transported from the U.S. Navy pier in Seattle in 1970. 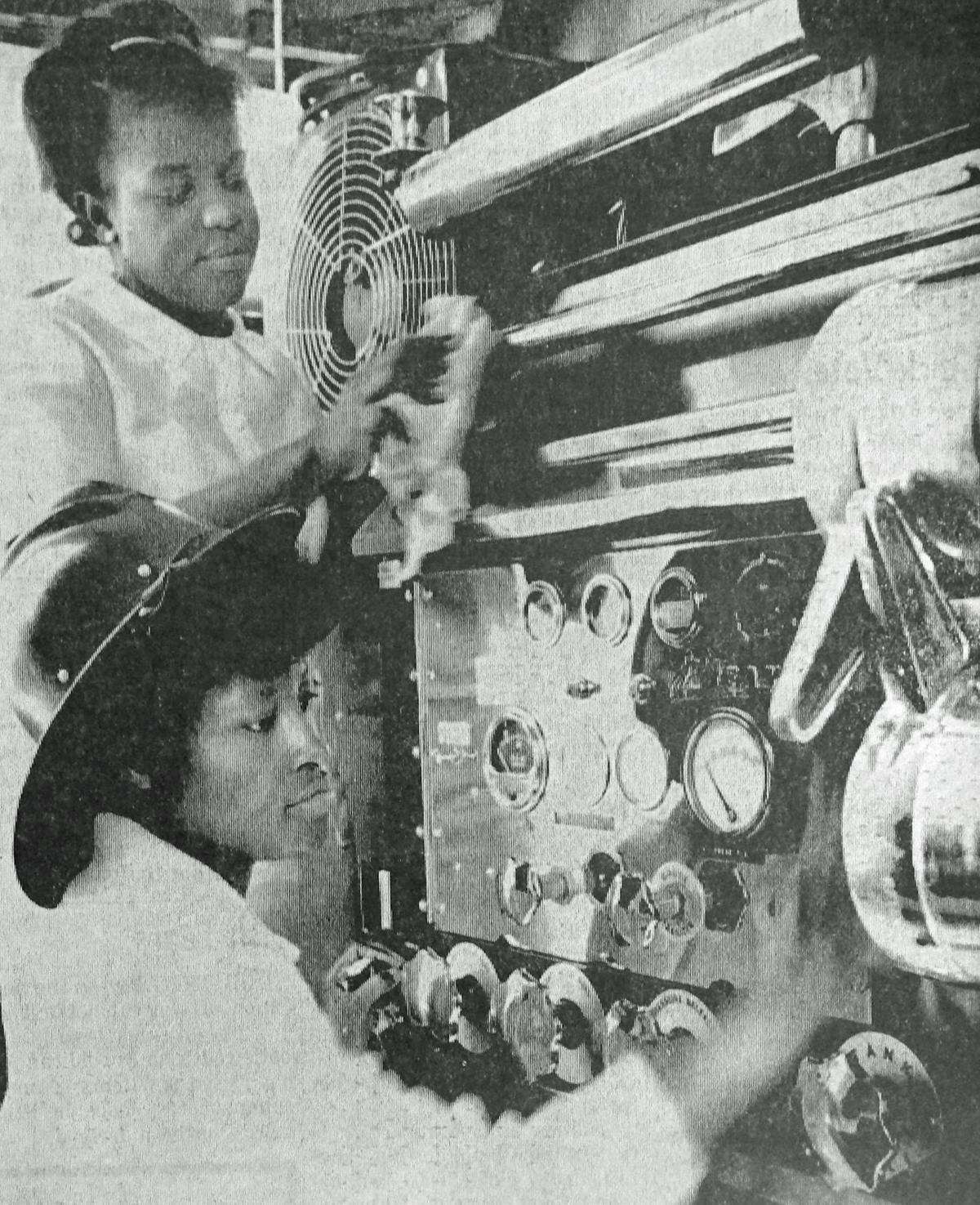 The Columbia River Bar Pilots helicopter drops 1,750 golf balls onto a green at the Astoria Golf & Country Club as part of a fundraiser for the Assistance League of the Columbia Pacific in 2010.

The image, ‘Arcadia Fantasy,’ captures the reflection of the sun at Arcadia Beach in 2010.

The hand hewn Finnish Lingdren log house, built in the early 1900s near Seaside, is speedily being resettled at the south end of Cullaby Lake in 1970.

Portions of a huge lighthouse lens are unloaded from U.S. Coast Guard cutter Yocona for the Columbia River Maritime Museum, after being transported from the U.S. Navy pier in Seattle in 1970.

It was a busy weekend for some on the North Coast. While people like City Planner Rosemary Johnson and Astoria Library Director Jane Tucker were out cleaning up the streets of Astoria during a cleanup weekend, others were raising money for a good cause.

Some 1,750 golf balls rained from the Columbia River Bar Pilots helicopter onto a green at the Astoria Golf & Country Club for a fundraiser Saturday for the Assistance League of the Columbia Pacific.

Participants “bought” golf balls which were dropped from the chopper and the balls that landed the closest to the hole won prizes. The event raised nearly $9,000.

Small-scale solar and wind energy devices could offer Astoria residents their own supply of renewable power.

But built in the wrong places, they could also block scenic views for neighbors, make too much noise, encroach on power lines or interrupt flight patterns of resident birds.

It’s an issue that is coming up in more and more communities around the nation as federal and state incentive programs offer renewable energy loans, grants and tax credits to homeowners and businesses.

The city of Astoria is developing guidelines on what kind of small-scale solar and wind energy facilities can be built within city limits and where they should and should not go. The resulting ordinance will serve as a model for communities on the Oregon Coast.

The Columbia River Estuary Study Taskforce has done the background research and prepared a draft ordinance on renewable energy devices that could eventually be incorporated into the city’s development code.

Can it be true?

After more than five years of fighting for local, state and federal permits for their Bradwood Landing liquefied natural gas project, NorthernStar Natural Gas Inc. says it is suspending the $650 million development.

On Tuesday, in a press release, company President Paul Soanes said “extended delays in the processing of state and federal permits for Bradwood Landing and the difficult investment environment have forced us to suspend development.”

For five years, the retired librarian has been the local face of the Bradwood project opposition.

For once, when asked for her opinion on LNG, she was speechless.

Craig, the daughter of Mr. and Mrs. Robert Craig, of Astoria, performing in front of a capacity audience, sang for her talent number an arrangement by Mike Kujala, Astoria, of “I’ve Got to Be Me” and “Both Sides Now.”

Upon receiving the title of Miss Clatsop County, she received the right to compete in the Miss Oregon Pageant July 9 through July 11 in Seaside, a $350 scholarship to the college of her choice, the keys to a 1970 car, a wardrobe given by countywide merchants, an armful of red roses, a gold crown signifying the 50th anniversary of Miss America pageants across the nation and a trophy.

Svensen’s Margie Huhta, Miss Oregon 1969, has been selected as one of seven traveling to Vietnam Aug. 10 for a 22-day tour to entertain the men and women in the armed services.

Astoria Mayor Harry Steinbock will lead a parade at Tongue Point Job Corps Center Saturday, starting at 9 a.m., one of several events at the center in observance of National Fire Services Recognition Day. The public is invited to view the parade, which will start at the main gate and travel a route covering the entire base and terminating at the fire station.

U.S. NAVAL STATION, Astoria — Battlefront supplies are being loaded here for shipment direct to Pacific war areas, naval station authorities pointed out today in announcing the use of the station as a transshipment base.

Boxed loads of advance base supplies are hauled direct by rail from the huge naval supply depot, Spokane, where the countless items of naval warfare are assembled in boxed or “palletized” units to be opened and used within rife-distance of the enemy.

LONDON — The German radio at Hamburg tonight broadcast an announcement that Adolf Hitler is dead.

There is no immediate confirmation from any allied source.

The retail merchants’ committee of the Astoria Chamber of Commerce today followed the lead of other Northwest cities to change its store-closing plans for V-E Day.

The new plan, as outlined by Gene Lowe, chamber board member representing the merchants, was this: In the event victory is proclaimed in Europe, and news is received here between 8 a.m. and 6 p.m. of any day (except Saturday), stores will close for balance of the day. There will be no closure if the news comes on Saturday, and no closures on the day following V-E Day.

The Astoria Mooring Basin Committee, at a final meeting Wednesday before the U.S. Engineers’ hearing here next Tuesday, completed plans for their plea for government assistance in building a huge small-boat harbor in east Astoria, estimated to cost more than a half-million dollars.

Ensign Howard R. Hadrick, United States Navy Reserve, of Astoria, a member of fighting squadron 22, has returned to the U.S. after a tour of duty as a hellcat pilot aboard a carrier operating against the Japs.

He is a member of a squadron that has participated in all major naval and air engagements in the central and south Pacific since last June.

Loose gear and equipment of the Hermes I, which floundered on the north jetty at Grays Harbor Sunday, had been salvaged by Wednesday afternoon and the crew was working with coast guardsmen to save the engine of the 33-foot halibut boat before the hull completely disintegrated against the rocks.

U.S. Coast Guard sources counted as a total loss the hull of the Hermes which struck the jetty about 10 p.m. Sunday when outbound in a heavy fog for opening of the halibut season.

The skipper, Waino E. Tolonen, and the two-man crew, had managed to climb to safety on the jetty.

The Warrenton crab boat Rainbow capsized while working crab pots near heavy breakers a half-mile south of the Columbia River jetty about 11 a.m. Thursday, taking the life of one man while another saved himself by swimming to shore.