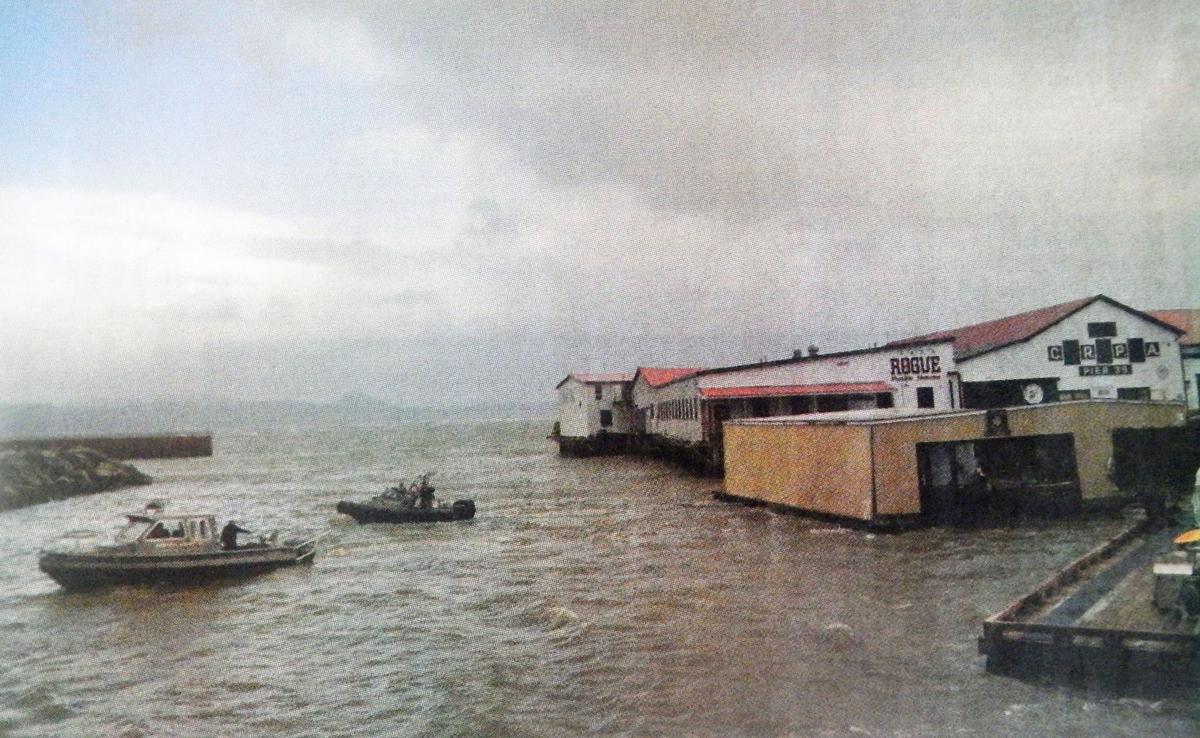 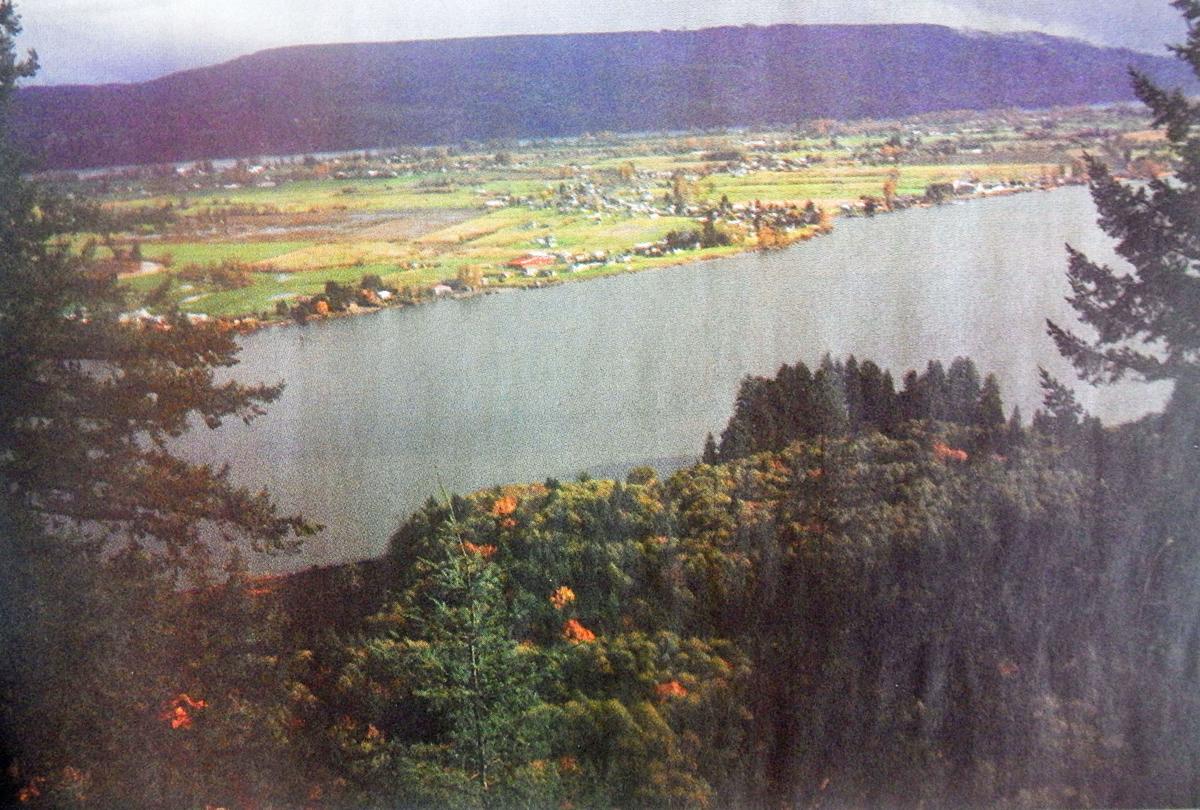 The view from Bradley Scenic Wayside is one reason the park is popular with travelers. The Columbia River passes far below the park, which overlooks Puget Island in 2009.

Christmas lighting is going up in Astoria, with city workers doing the job, in cooperation with the Pacific Power & Light Co. in 1969. 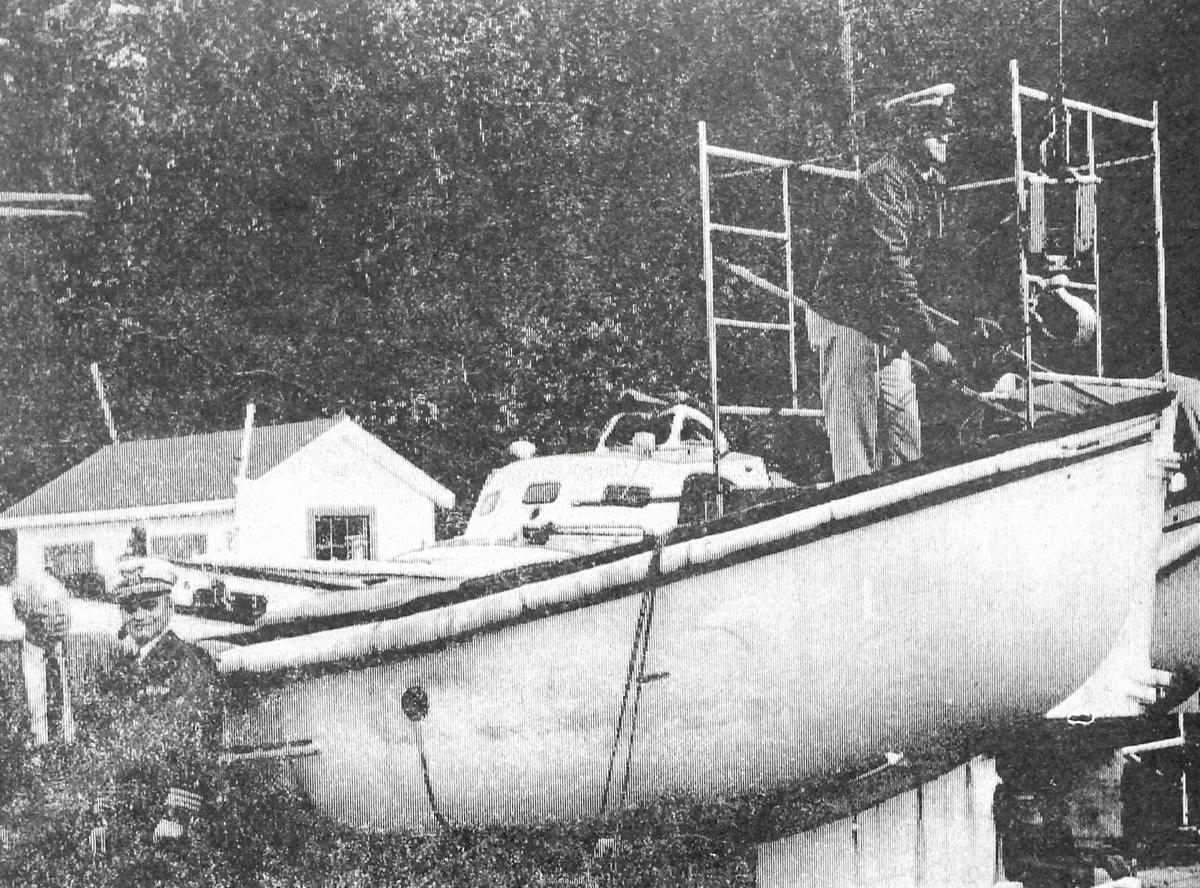 Rolf Klep, left, and Cmdr. William Barney with a motor surfboat given to the Columbia River Maritime Museum in 1969.

The view from Bradley Scenic Wayside is one reason the park is popular with travelers. The Columbia River passes far below the park, which overlooks Puget Island in 2009.

Christmas lighting is going up in Astoria, with city workers doing the job, in cooperation with the Pacific Power & Light Co. in 1969.

Rolf Klep, left, and Cmdr. William Barney with a motor surfboat given to the Columbia River Maritime Museum in 1969.

Gail-force winds ripped the Clatsop County sheriff’s Marine patrol boathouse from its location at the East Mooring Basin Sunday morning and smashed it into the stone breakwater then into Pier 39.

Sheriff Tom Bergin and his deputies were called out between 2:30 and 3 a.m. and scrambled to remove two marine patrol boats from the boathouse, which had struck ground on the basin’s stone breakwater, but high winds made it too dangerous for them to prevent the boathouse from continuing upstream on the Columbia River and crashing into the pier.

Within two weeks of being replaced, the weather buoy 20 miles from the mouth of the Columbia River has stopped transmitting wind data.

The frequent winter failure of the region’s National Oceanic and Atmospheric Administration’s weather buoys has been a growing source of concern since the four buoys closest to the mouth of the Columbia were all malfunctioning early this year.

The new buoy withstood the first big storm, which blew in a day after installation.

But when gale-force winds rocked the coast last week, they knocked out both of the buoy’s wind instruments. Now, the Fir is trying to schedule another trip out to the buoy to repair the damage, but wild weather could get in the way.

The Astoria Riverfront Trolley has suspended operations until a trestle at the foot of 11th Street can be repaired, but it could be back on the regular weekend schedule as soon as Friday. The 40,000 pound trolley normally passes over the trestle as it makes its way along the tracks from the barn near the Port of Astoria to 39th Street and back.

“Bergerson’s (Construction) is going to get right on it today,” Astoria Public Works Director Ken Cook said. “It should be fixed by the end of the work day on Friday.”

A spokesman for the Sisters of Charity of Providence, who staff St. Mary’s Hospital in Astoria, said Friday that the sisters are considering two offers to buy the hospital, from which the sisters have said they will withdraw on next March 1.

Bill Tobin, public relations director for the sisters in Seattle, said the offers are being considered from Columbia Hospital, Astoria, and from American Medicorp, a fairly young New York-based corporation which has acquired several hospitals in the West, including Woodland Park and City of Roses, both in Portland.

Astoria’s city manager says the proposed sewage collection and treatment project for the city will undeniably cost a lot of money but says the city really has no choice in the matter.

“The law is the law, and we must comply,” City Manager Dale Curry told Astoria Chamber of Commerce members Friday. He added, though, that Astoria’s pollution probably doesn’t do as much harm as that of other cities because Astoria is near the ocean.

The Astoria waterfront was “invaded” by the Federal Bureau of Commercial Fisheries Monday when the 176-foot George B. Kelez docked at the Standard Oil Co. dock and the 215-foot Miller Freeman at the East Astoria Mooring Basin.

The Kelz, four days out of Seattle on a resource assessment cruise involving Pacific saury, was forced into the Columbia River by mechanical trouble with its running gear.

Project leader Steve Hughes of the bureau said the vessel presumably hit a log in the Strait of Juan de Fuca.

The two-year-old bureau research craft is docked at the East Astoria Mooring Basin to pick up mail and take on new scientific personnel.

Among the scientists due aboard this afternoon is Judy Traut, first woman scientist to be sent on a research cruise by the bureau’s Mondlake Laboratory in Seattle, according to Herb Shippen, chief scientist for the Miller Freeman’s current cruise.

Two wooden Coast Guard motor surfboats, used aboard the Astoria-based cutter Yocona for three years, became the property of the Columbia River Maritime Museum in a presentation Tuesday at the Coast Guard’s Tongue Point base.

Cmdr. William Barney, Yocona skipper, commented, “It is very gratifying to have the opportunity to preserve a portion of the Coast Guard’s history and tradition in such a pleasant manner.

“I know that the Columbia River museum will, as usual, display (these) boats with the dignity and pride devoted to its other fine display.”

For the most part, it was part time beach residents and the more recent full-time residents in support of vehicle restriction while the residents of longer standing supported continued vehicular access to the beaches.

With Seattle and Tacoma moving to block possibility of bubonic plague, Clatsop County’s sanitarian, Verne Reierson, today stressed that no symptoms of plague infested rats have been found in this seaport town, but that the populace should take greater precaution than ever before to guard against the danger.

The plague is transmitted to man from the rat by fleas. Rats from this area last went for laboratory examination two years ago however Reierson said that in his monthly check-up and eradication work since then he has found no sick or dying rats.

A view of the Leyte operations in the Philippines from a Landing Ship Tank is furnished to Astorians in a letter recently received by Mr. and Mrs. Otto Tiros, 7 Altadena, from their son Al Tiros, seaman first class.

Tiros, who has been in the Navy for two years and has been on sea duty since last spring, writes, “Our ship was one of the many craft of all kinds to take part in the invasion of the Philippines. Our LST was the first ship to land on the beach at the northernmost part of Leyte Island. Numerous craft received casualties, but we were lucky in that respect...”

Requests for certificates permitting purchase of oil heaters have been bothering the ration office staff for some time, according to Mrs. R.K. Booth, head of the fuel oil rationing division. She explained that because Astoria is in a critical oil area, the ration board cannot issue certificates (with a very few exceptions) for purchase of oil burners.

The Astoria Athletic Association, which is this week hard at work on plans for the 1944 intercollegiate basketball jamboree at the United Service Organizations pavilion Dec. 22 and 23, has voted to study prospects for expanding its membership to get behind an adequate organized athletic and recreation program for the city of Astoria along lines of some city-sponsored programs in other cities.