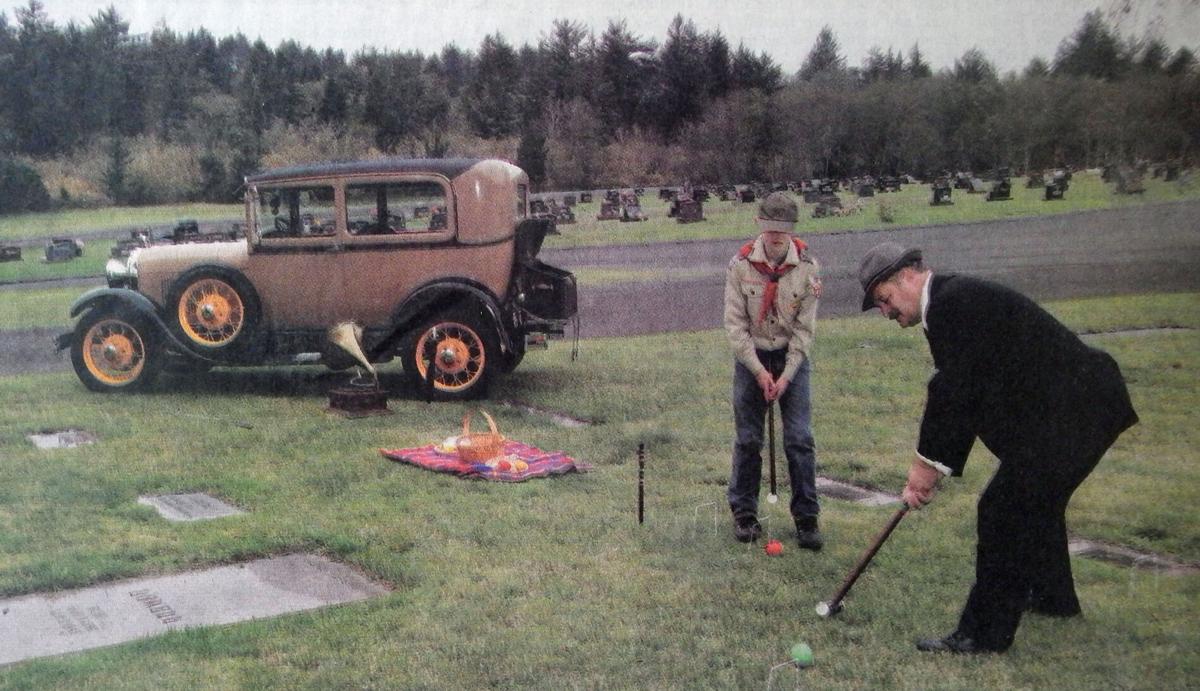 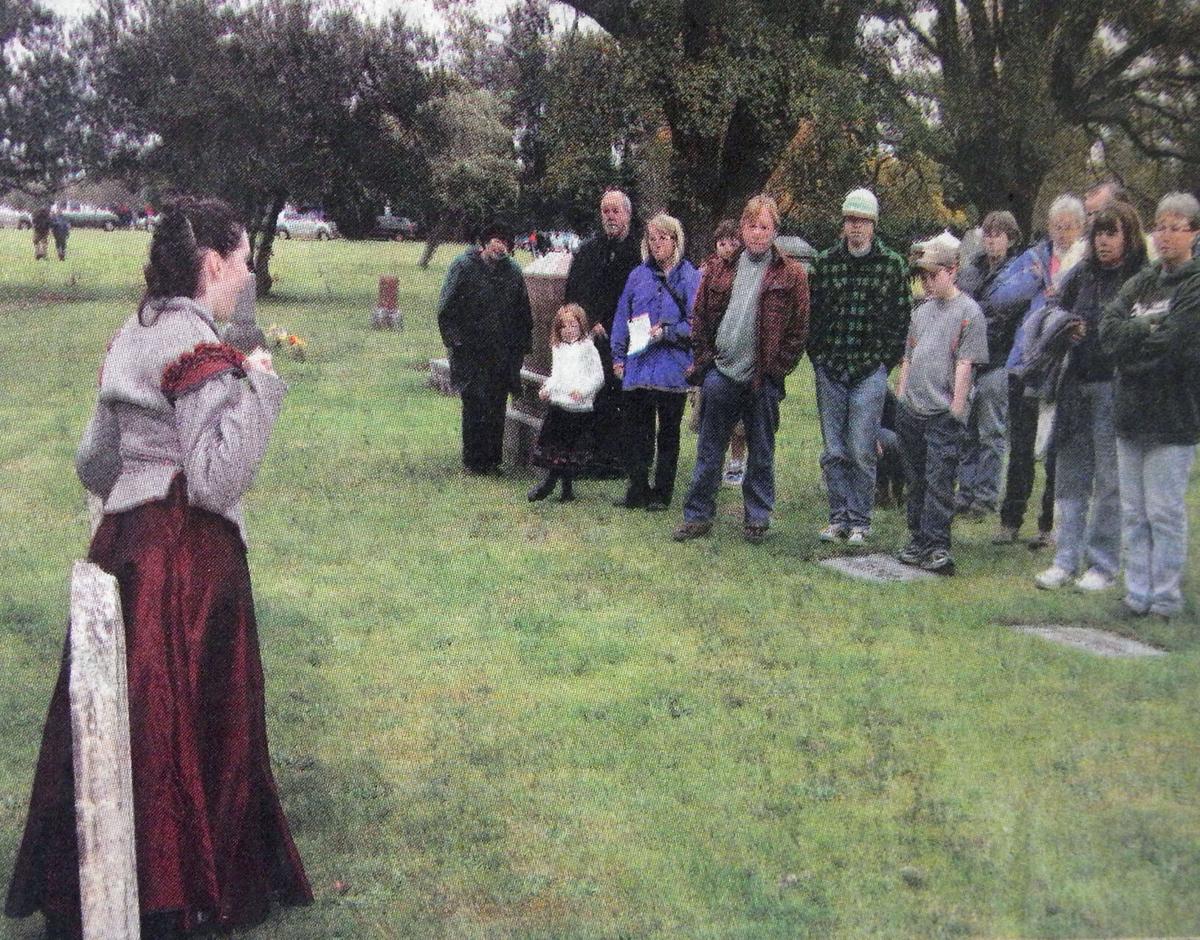 Rachel Fackler, portraying Ida Crosby, whose father was a partner in a schooner with Capt. George Flavel and one of the first Columbia River Bar pilots, during the Talking Tombstones event in 2010. 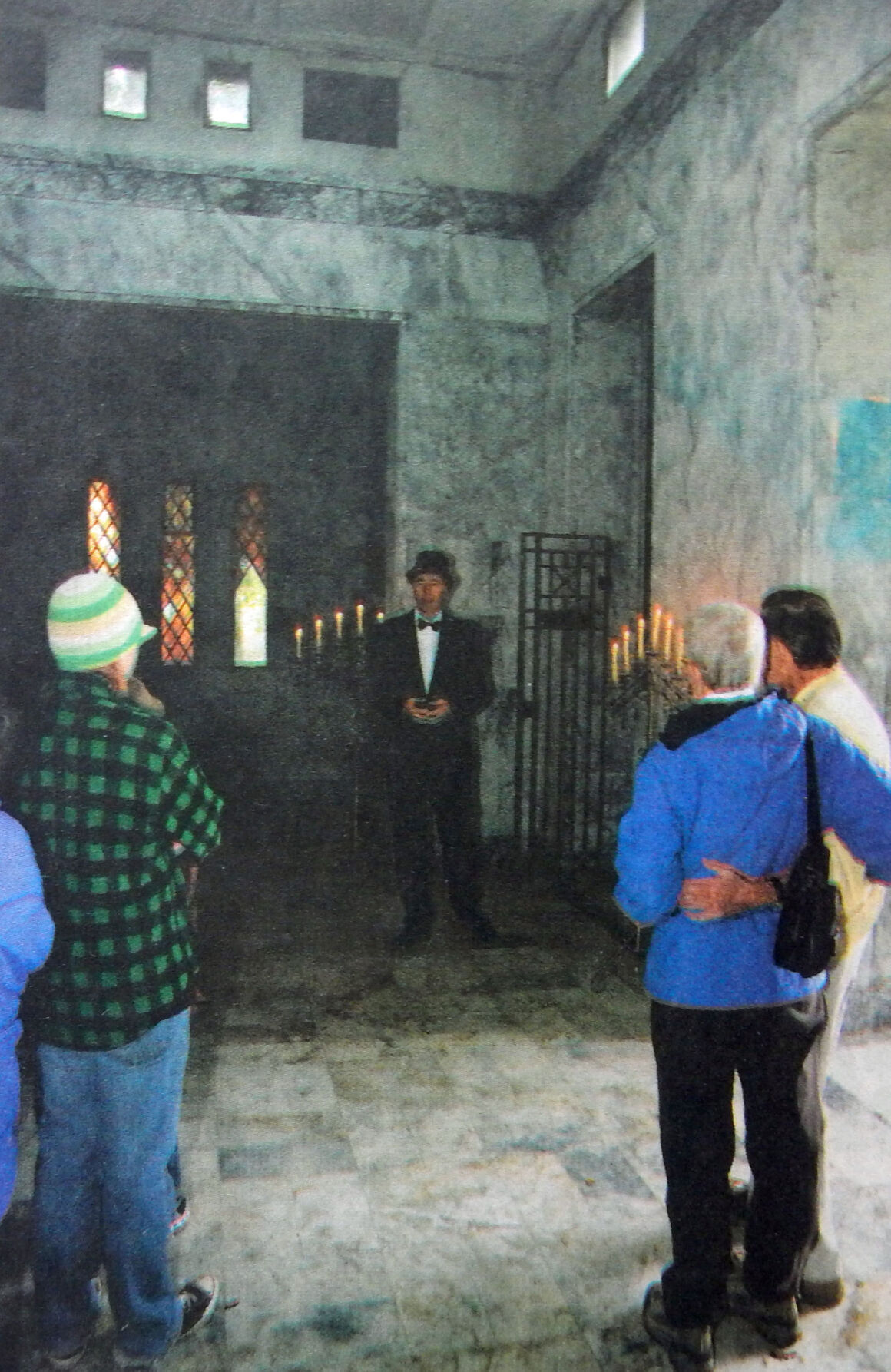 David Reid, portraying Joseph C. Megler, a partner in a fish cannery in the town of Megler, Washington, during the Talking Tombstones event in 2010. 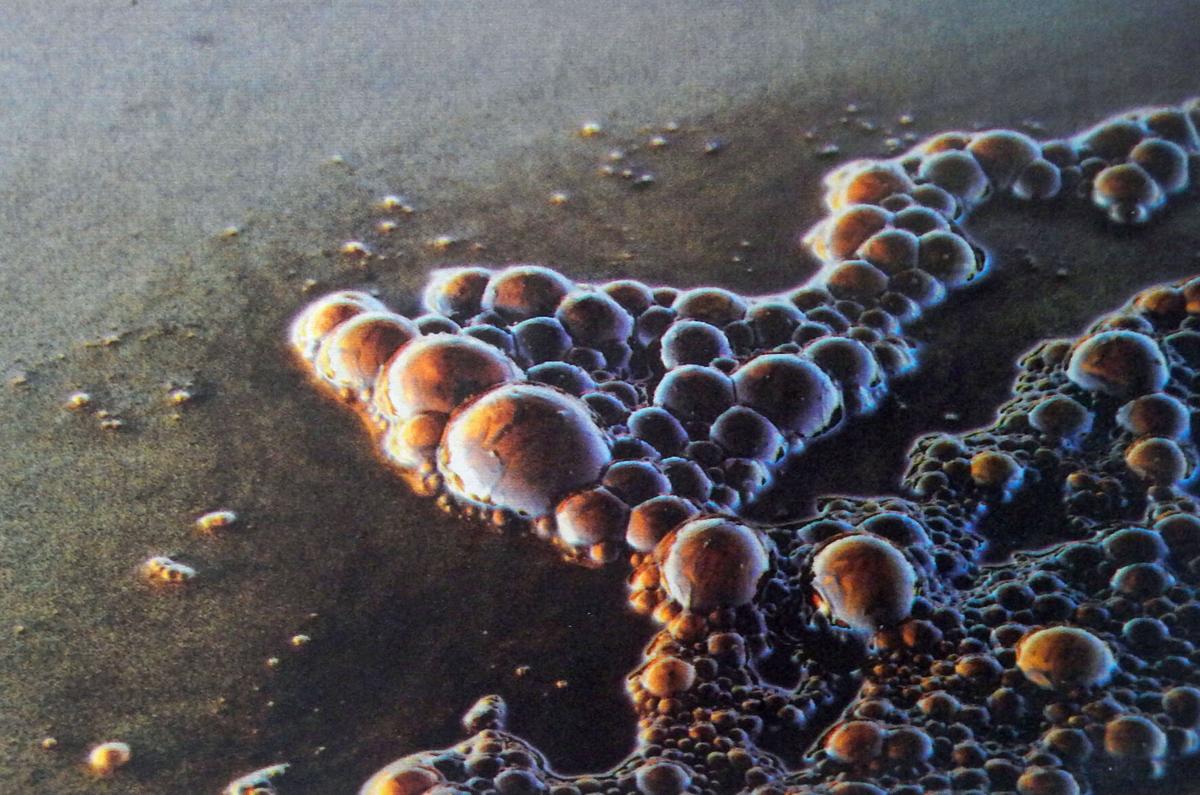 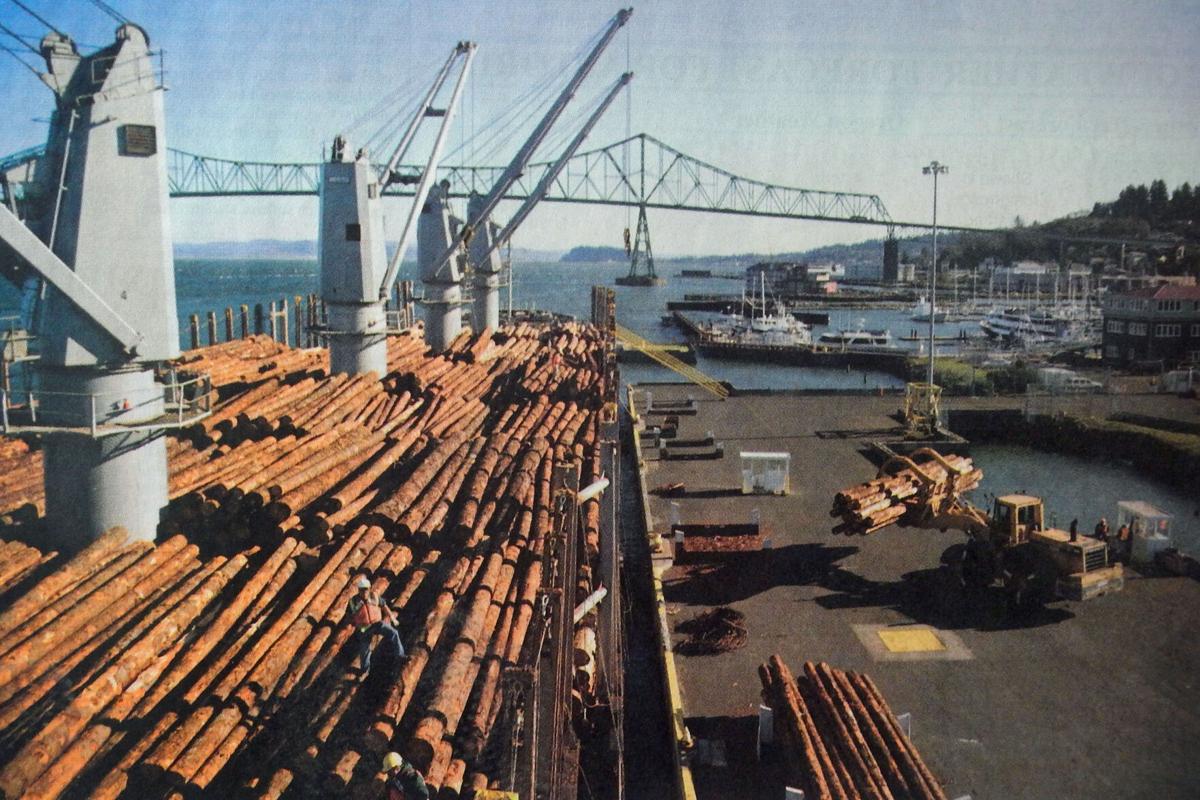 A front-end loader hauls logs to the edge of the Port of Astoria’s Pier 1 in 2010, where cranes then lift the logs onto the deck of the Santa Pacifica. 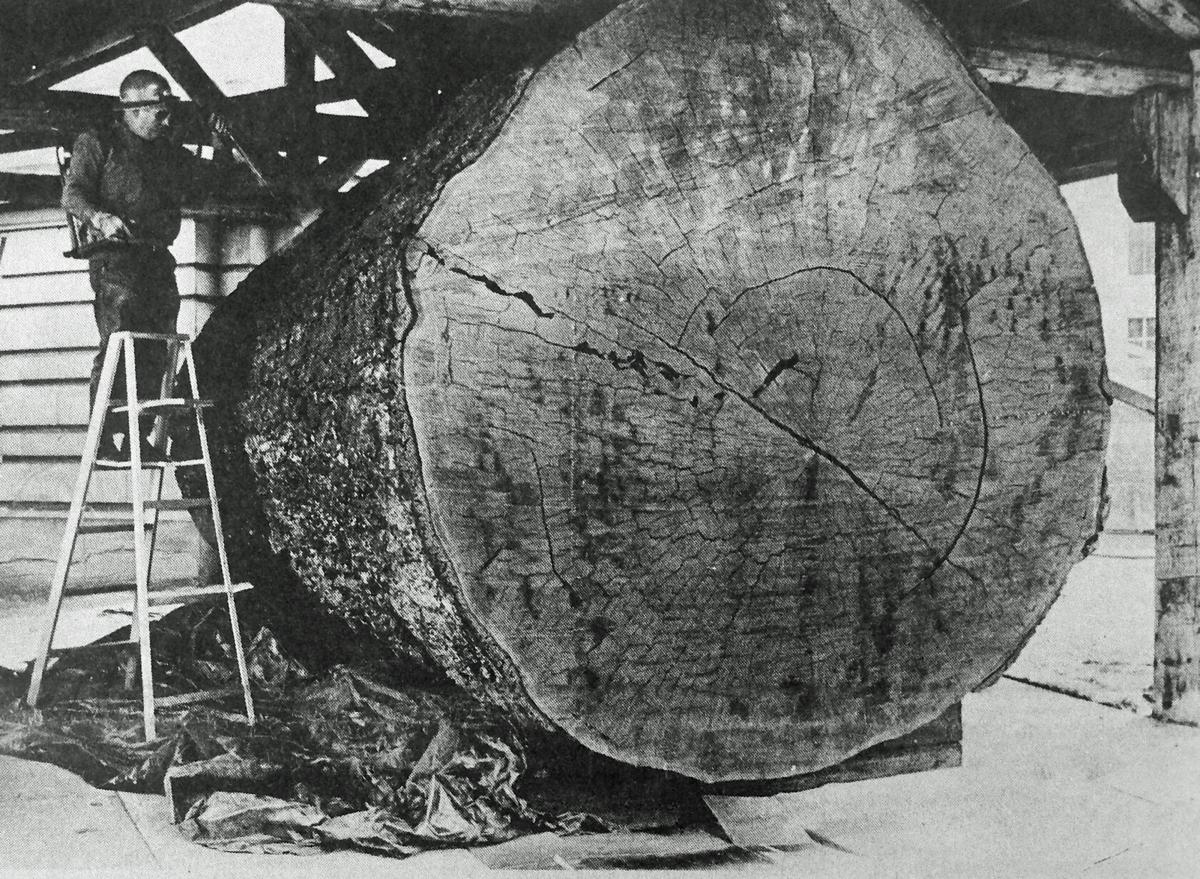 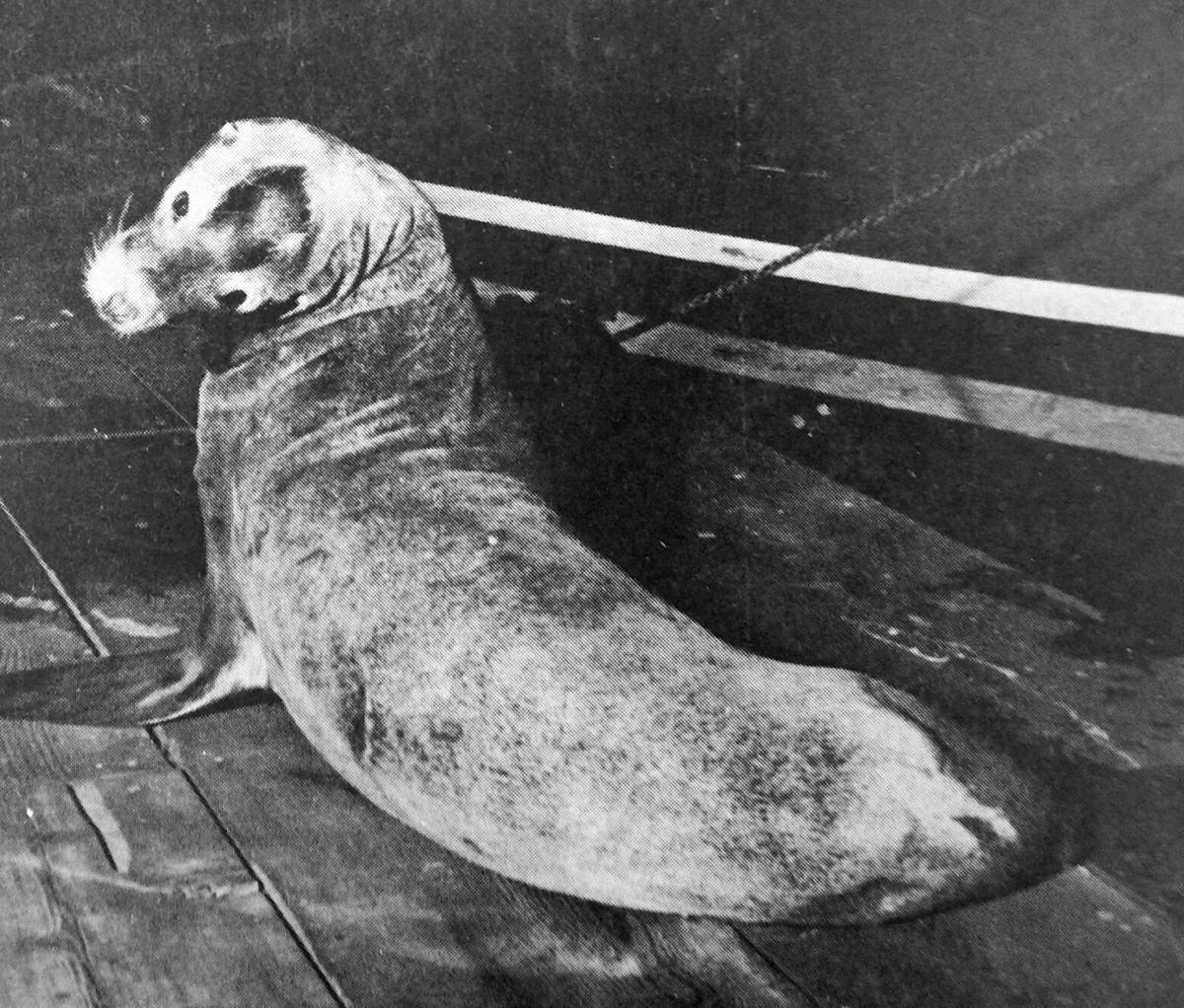 A sea lion was spotted on a float at Bumble Bee Seafoods shipyard in 1970. 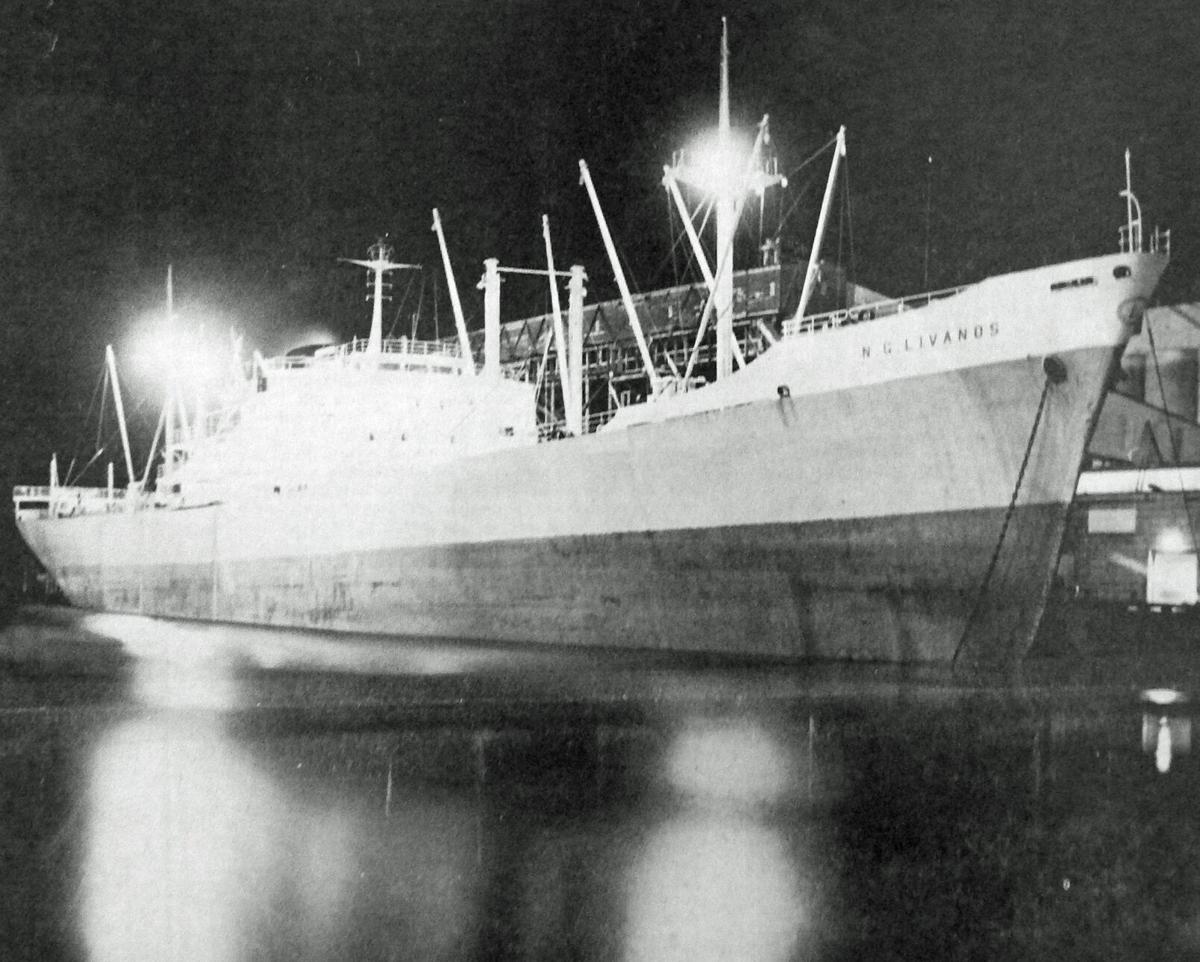 The N.G. Livanos docked at the Port of Astoria’s Pier 2 awaiting a load of grain in 1970.

Rachel Fackler, portraying Ida Crosby, whose father was a partner in a schooner with Capt. George Flavel and one of the first Columbia River Bar pilots, during the Talking Tombstones event in 2010.

David Reid, portraying Joseph C. Megler, a partner in a fish cannery in the town of Megler, Washington, during the Talking Tombstones event in 2010.

A front-end loader hauls logs to the edge of the Port of Astoria’s Pier 1 in 2010, where cranes then lift the logs onto the deck of the Santa Pacifica.

A sea lion was spotted on a float at Bumble Bee Seafoods shipyard in 1970.

The N.G. Livanos docked at the Port of Astoria’s Pier 2 awaiting a load of grain in 1970.

WARRENTON — The dead actually did come to life this Halloween. In a way.

Actors breathed life into 10 people from the past for the Clatsop County Historical Society’s seventh annual Talking Tombstones reenactment Sunday at Ocean View Cemetery in Warrenton. With sponsorship from Astoria Granite Works, the nonprofit puts on the event on the last Sunday of October to promote interest in local history. This year’s event, themed “Think Inside the Box,” fell on Halloween.

Weather conditions have been fueling massive diatom blooms all along Clatsop County beaches, according to Tiffany Boothe of the Seaside Aquarium. Diatoms, single-celled plants (phytoplankton) that are found in both fresh and salt water, are responsible for turning the surf brown and staining the sand.

Everything in the ocean feeds on diatoms and other plankton, either directly or indirectly, Boothe said. Even baleen whales filter plankton and diatoms as part of their diet. Diatoms absorb large amounts of nitrates and phosphates that are delivered into the ocean by coastal rivers, contributing to their population explosion.

These diatom blooms are a sign of a healthy ocean environment. When the surf zone becomes too saturated with diatoms, they wash ashore in such great quantities that they resemble an oil spill.

SEASIDE — Water reaching as high as 8 inches rushed over U.S. Highway 101 2 miles south of Seaside Monday, causing drivers to creep along the highway for at least 12 hours.

Large waves washed rocks and logs onto Sunset Boulevard in the Cove. Seaside police warned area residents to be cautious.

Two familiar faces will return to the Astoria City Council and Karen Mellin will make her debut as Ward 3 city councilor with the final results of the Nov. 2 election.

Willis Van Dusen is still mayor with 2,622 votes cast for him. His opponent, Bonnie Wingard, had 847 votes.

A little history was made Wednesday when the cargo vessel Santa Pacifica arrived at the Port of Astoria at 5 a.m. to receive approximately 1.2 million board feet of logs harvested from North Coast forests.

The 554-foot Panama-flagged vessel is the first log ship to dock at the Port in 14 years, according to Jack Crider, executive director of the Port of Astoria.

The logs were loaded from Pier 1 Wednesday and work continued today by two crews of 12 longshoremen as part of a new project by Westerlund Log Handlers of Bremerton, Washington.

A U.S. Coast Guard helicopter that made a forced landing in Youngs Bay was pulled ashore early today and brought to the Coast Guard air station for survey and repair of damage.

The helicopter landed about 6:30 p.m. Sunday when the engine malfunctioned during practice approaches to the Clatsop airport. The machine landed by auto-rotation in shallow water and was standing upright in the mud.

The Astoria City Council received a plea Monday night from a former city councilman that traffic congested on Commercial Street be cleared up immediately.

Robert Hanson, who sat on the council several years ago and has a business on Commercial Street, told city councilors, “It’s annoying to have to tell a phone caller to hold on a minute while a truck goes by.” He said log and chip trucks rumble by at various times.

Mayor Harry Steinbock answered he thought the council could move faster than it had on the problem, but said the Planning Commission and downtown plan study committee were moving on it, too.

Steinbock appeared today to have won a fourth term as Astoria mayor by a hairbreadth margin over retired U.S. Navy officer Louis Washer. Unofficial returns from the city’s 18 precincts gave Steinbock 1,992 and Washer 1,916 — a margin of 76 votes.

A shipment of 3,000 tons of sunflower seed, believed to be the first of its kind to be exported through a Northwest port, is scheduled for loading aboard the Chinese freighter Tai Hsing at the Port of Astoria docks late this month. The shipment is destined for Japan.

The seed will be crushed for its oil content after reaching Japan, according to Richard Berger, vice president of Kerr Grain Co., which is handling the shipment through its grain elevator here.

A 20-foot, 45-star flag that flew over the cruiser USS Boston during the battle of Manila Bay in 1898 has become the property of the Columbia River Maritime Museum.

The flag was presented to Rolf Klep, museum director, at a ceremony during a Navy Day banquet at the Aero Club in Portland recently.

The flag was donated to the Portland Council of the Navy League by John Denny Scott, of Portland, who had received the flag many years ago from his father who was an officer aboard the Boston during the famous battle. The Navy League arranged with Klep for the flag to become the permanent possession of the Maritime Museum.

A floating U.S. Navy repair shop, equipped with machinery to handle maintenance jobs on light vessels, has arrived here for eventual duty at the fleet reserve base being prepared at Tongue Point.

Known as YR 78, the 150-foot craft was towed from Kodiak, Alaska, by the Navy tug Oriole, which is also berthed at pier No. 3. She survived severe weather in which the 45-man crew was given rough treatment. Their floating place of business rides with the comfort of a box. For nine days the Oriole towed, ducking a second storm in lee of Vancouver Island.

Completion of the organization of the Clatsop County branch of the Oregon Historical Society will be accomplished this evening at a meeting of members at the chamber of commerce at 7:30 p.m.

Already Tillamook and Coos counties have completed their organizations and are now county chapters of the parent organization. It is the purpose of the state organization to organize chapters in every county possible.

The USS Apache, veteran U.S. Navy tug with a long combat record in the Pacific, arrived in Astoria at 8:30 a.m. for an undisclosed assignment. Among the ship’s complement of 84 men and six officers are three Oregonians and one seaman from Deep River, Washington.

Burton Appelo, son of C.A. Appelo and his wife, of Deep River, is the local man who arrived aboard the three-year-old vessel. Appelo was assigned to the Apache at San Diego when she arrived from the Pacific battle zone.

The ships will be secured to docks and made airtight to prevent corrosion and recomposition of materials. All stores, except provisions, ammunition and fuel will be kept on board.

One ship in each nest will house a crew which will be charged with the general maintenance of all ships there. In addition, all of the larger combatant vessels, such as battleships, heavy cruiser and carriers, will be staffed by a skeleton crew in caretaker status.

Ships will be maintained in a condition whereby they could be fully manned in 10 days and be ready for sea action after a 20-day shakedown cruise.

Residents of Pacific County Friday welcomed resumption of the publication of Ilwaco’s Tribune, which was suspended when Publisher Dick Murfin was called into the U.S. Army six months ago.

The publisher’s wife, Kathy Murfin, has taken over editorial duties. She announced that, “We are resuming because we think the people of this vicinity will appreciate the effort and hoping Dick will be back, some day, to take over.”

Astoria-North Beach Co. ferry boat service across the Columbia River, suspended since Thursday morning, will probably be resumed late this afternoon or Sunday morning, it was announced today at the Astoria office of the transportation concern.

The Brookfield truck that crashed through the approach of the ferry company in Megler, Washington, early Thursday was recovered from the wreckage of the landing slip late Friday night and today repairs on the slip itself are in progress.