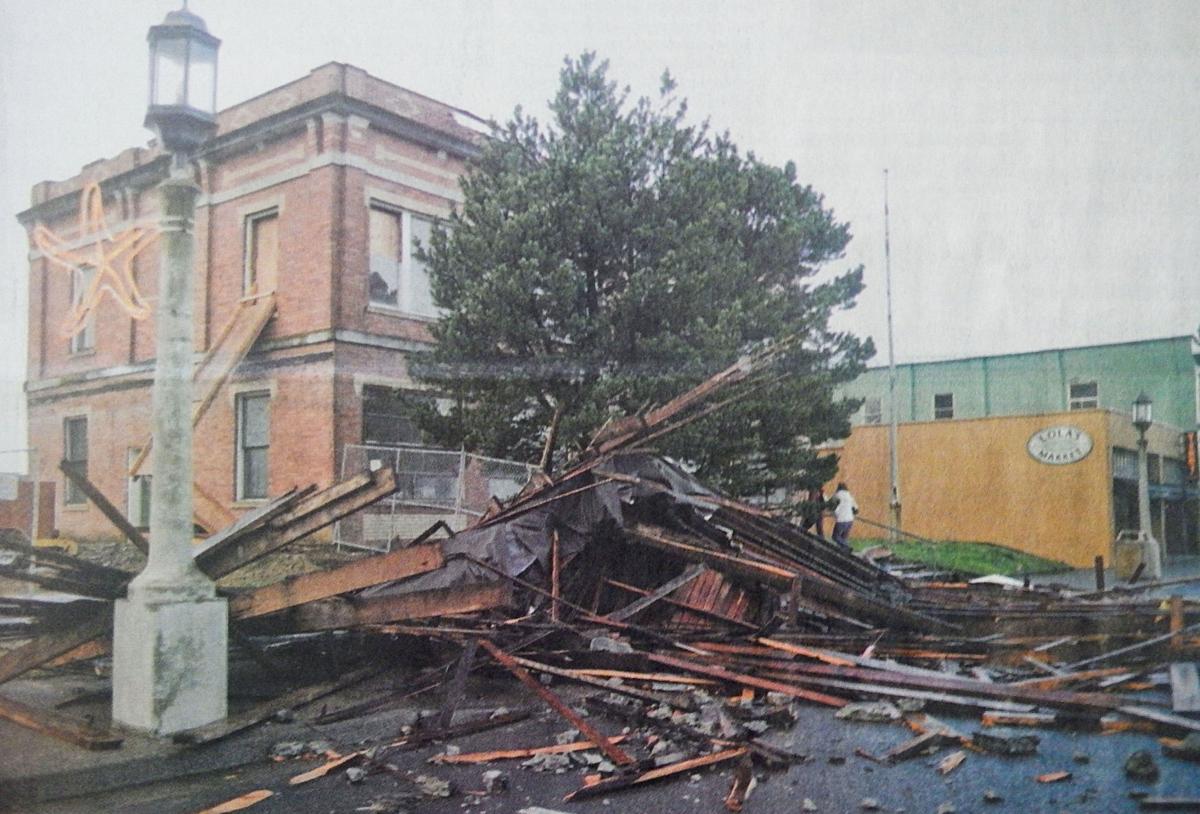 The roof of the old Seaside City Hall at 859 Broadway littered the sidewalk and street after being blown off by high wind overnight. 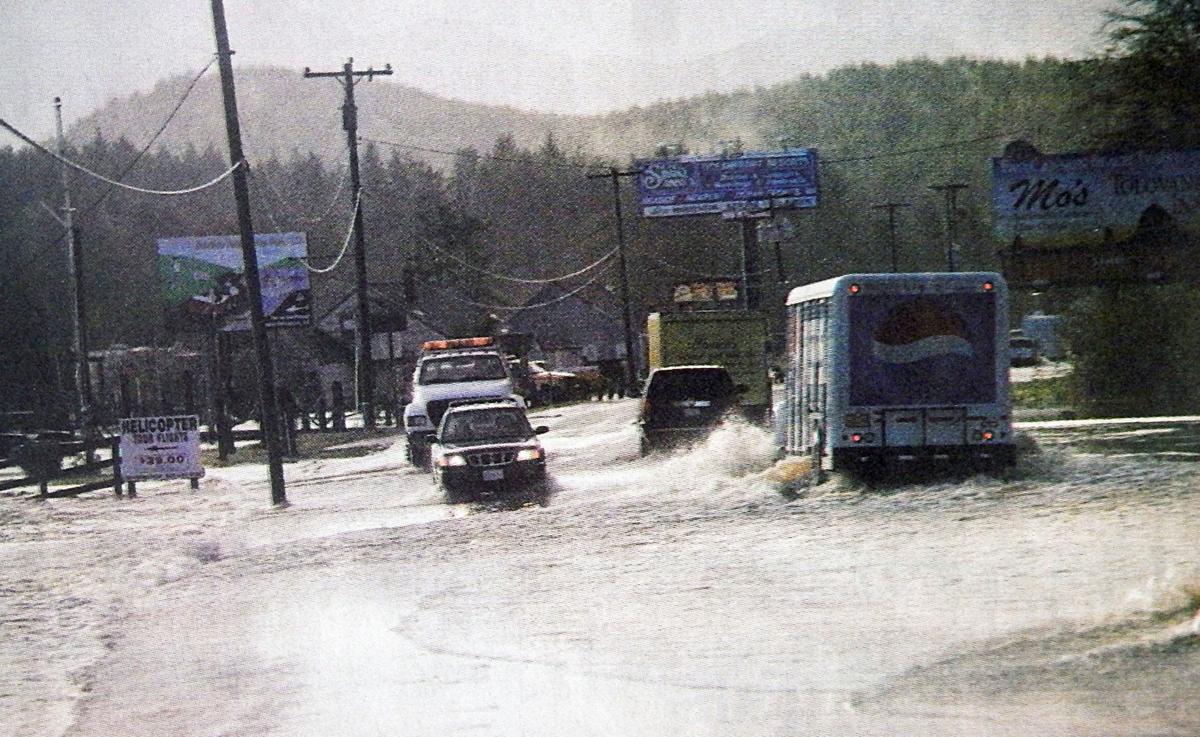 Water rushes over U.S. Highway 101 near Seaside Helicopters. Flooding from the Necanicum River closed the highway to low-clearance vehicles, though a Subaru wagon, followed by a tow truck, was able to make it north into Seaside. 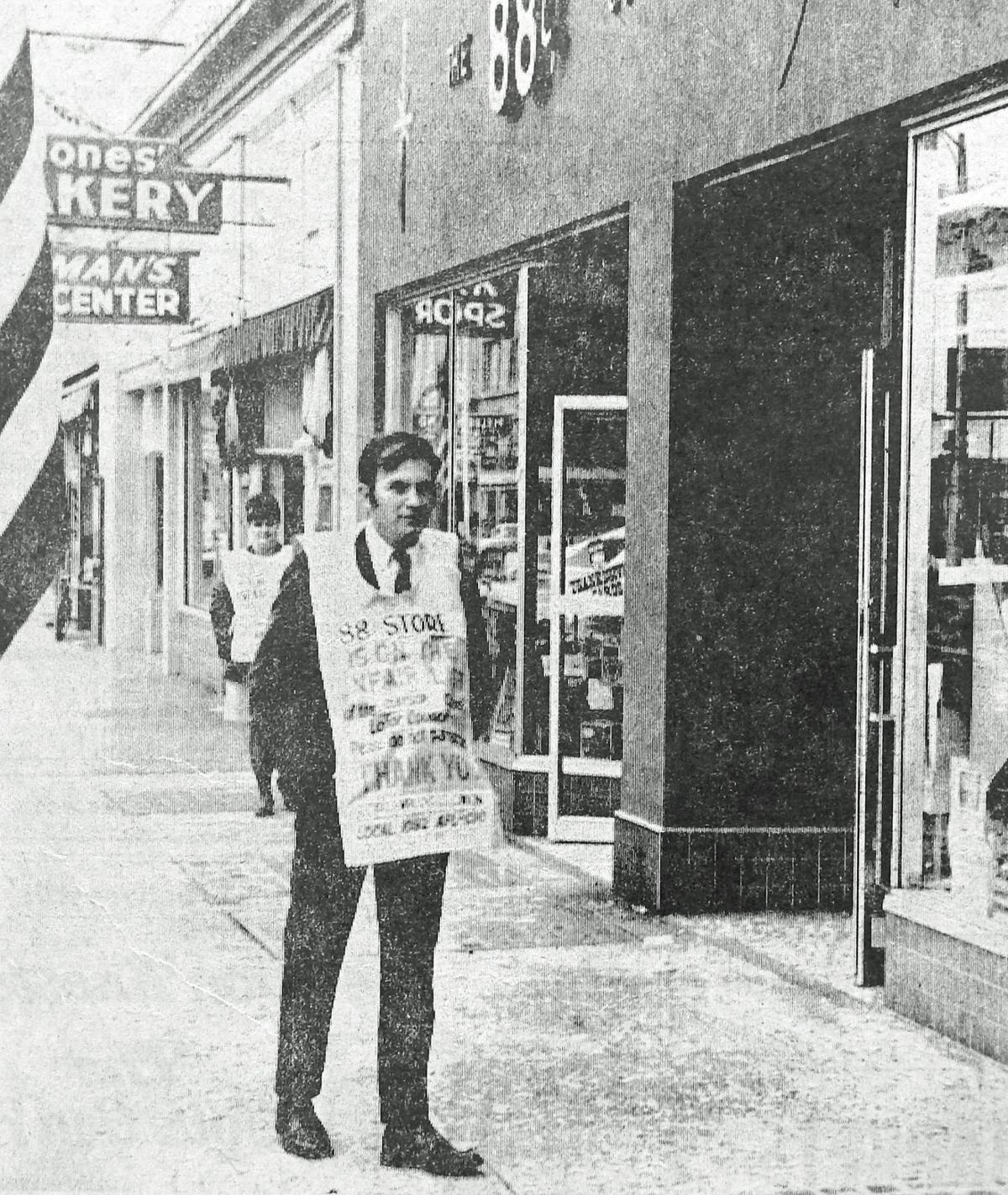 A picketer in front of the Astoria 88 Cent store. 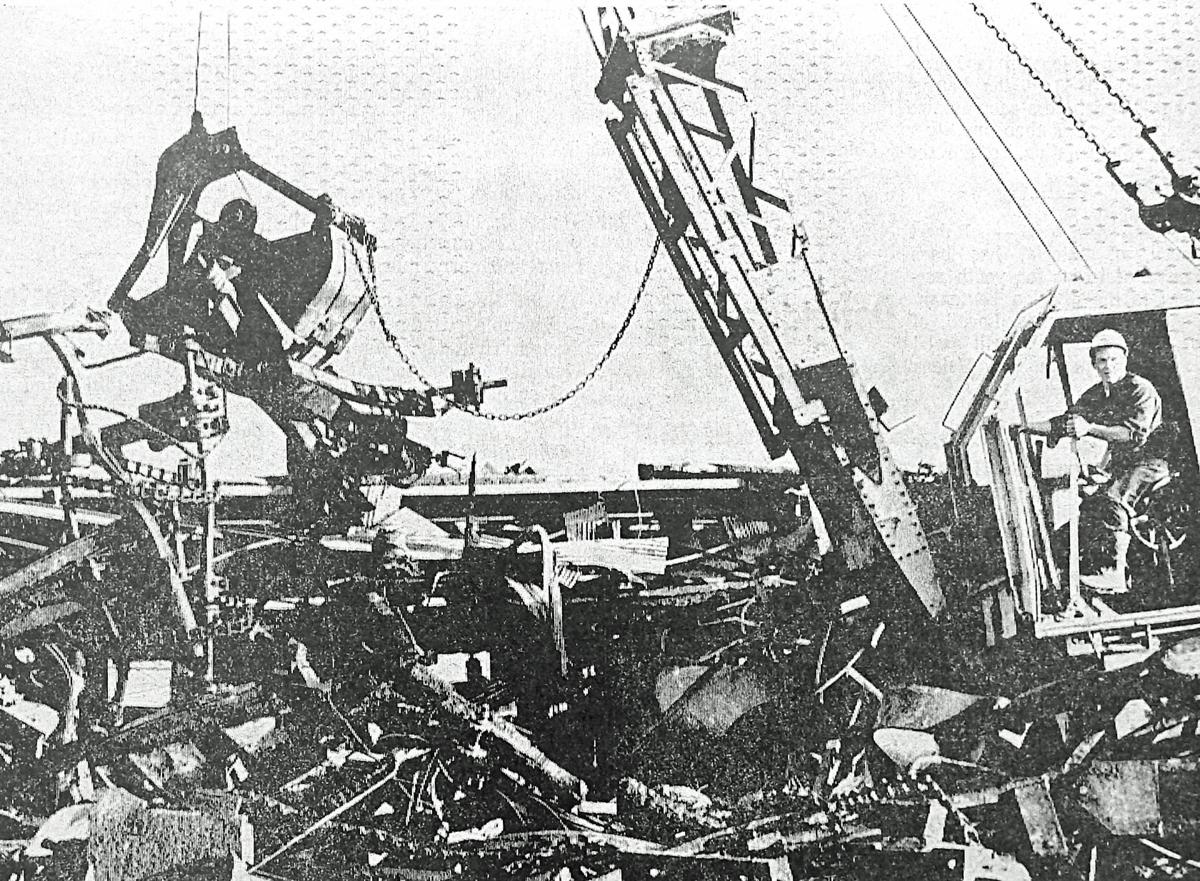 Cleanup is underway of fire wreckage at the Warrenton Lumber Co. plant site on the Skipanon River. A predawn fire destroyed the main mill on Oct. 26. 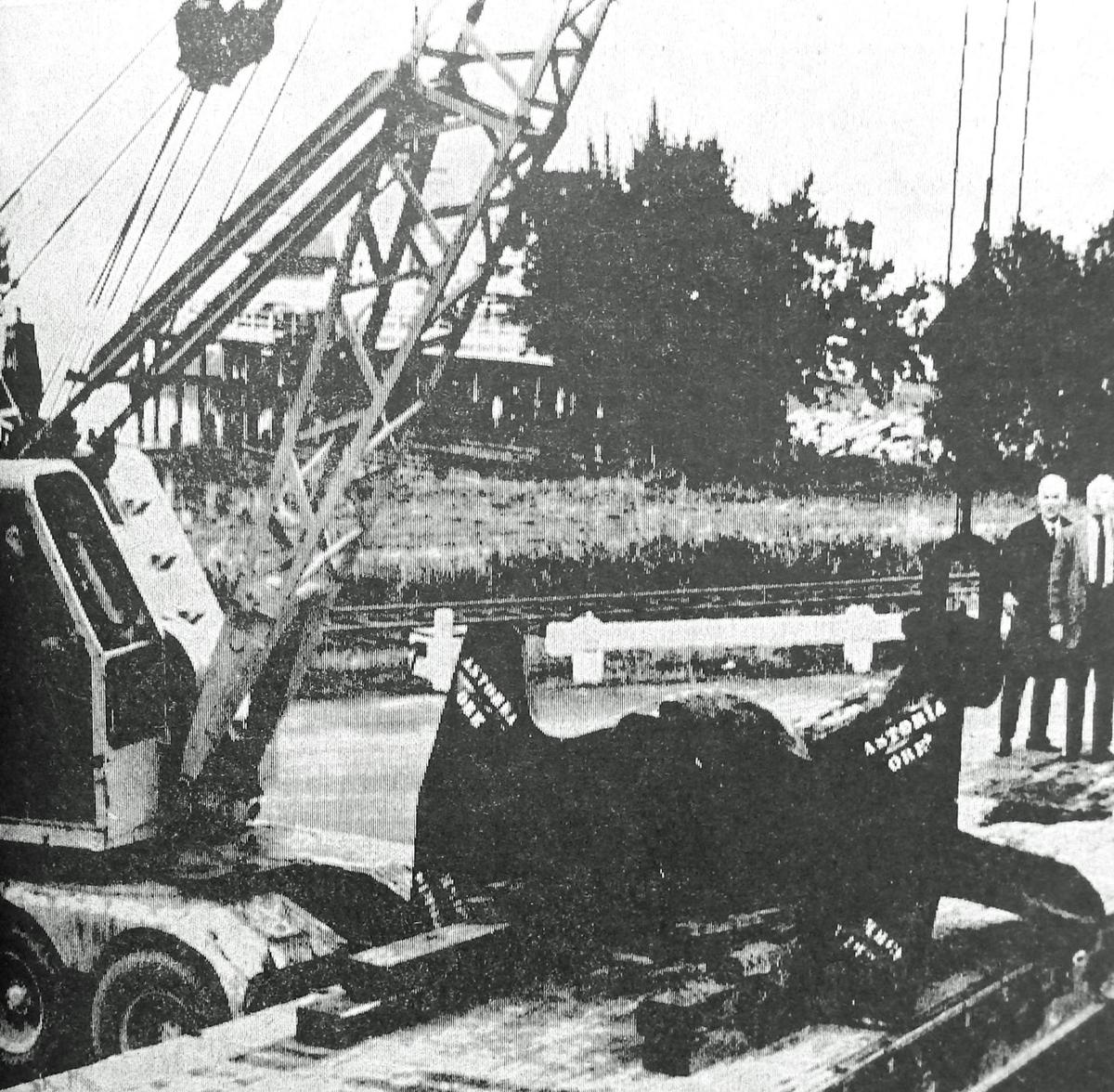 A 12 1/2 ton ship anchor from the Columbia River Maritime Museum was returned to the museum after being away on loan. 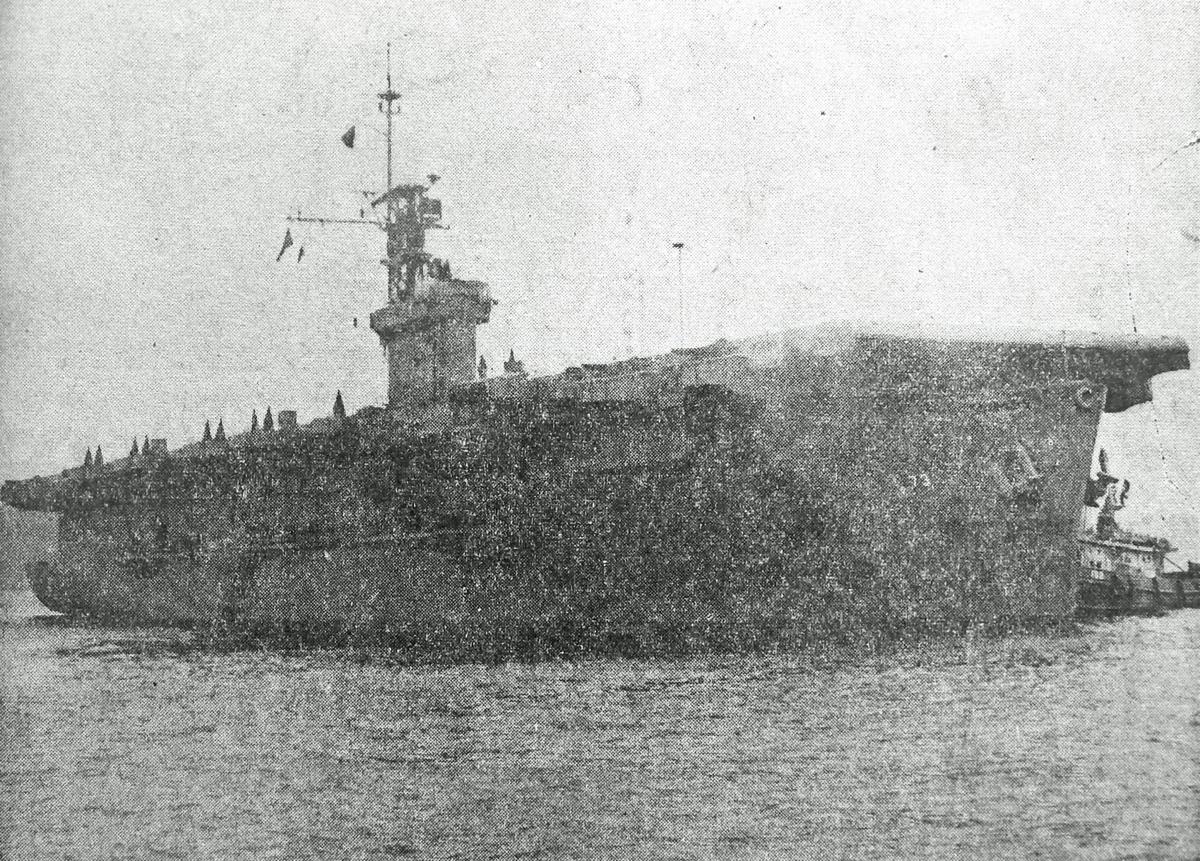 Loss of the USS Gambier Bay, a Vancouver-built escort carrier, in the battle off the Philippine islands, was revealed Friday by the Navy.

The roof of the old Seaside City Hall at 859 Broadway littered the sidewalk and street after being blown off by high wind overnight.

Water rushes over U.S. Highway 101 near Seaside Helicopters. Flooding from the Necanicum River closed the highway to low-clearance vehicles, though a Subaru wagon, followed by a tow truck, was able to make it north into Seaside.

A picketer in front of the Astoria 88 Cent store.

Cleanup is underway of fire wreckage at the Warrenton Lumber Co. plant site on the Skipanon River. A predawn fire destroyed the main mill on Oct. 26.

A 12 1/2 ton ship anchor from the Columbia River Maritime Museum was returned to the museum after being away on loan.

Loss of the USS Gambier Bay, a Vancouver-built escort carrier, in the battle off the Philippine islands, was revealed Friday by the Navy.

Starting this week, 15 workers will be laid off from Georgia-Pacific’s Wauna Mill for an extended period.

The layoffs will come from the labor pool, a group of workers who fill vacancies as needed in a variety of jobs at the mill.

Kristi Ward, public affairs manager for the company, said it’s the first time in “many years” the mill has had to impose involuntary layoffs.

The North Coast was picking up the pieces Tuesday after Monday night’s big storm walloped the coast with high winds and almost constant rain.

The National Weather Service warns that more bad weather is on the way.

Sustained winds of 55 mph were reported at Clatsop Spit near Astoria and there was one report of a gust of 62 mph in Seaside.

The U.S. Coast Guard closed the bars at the Columbia River and Tillamook Bay Monday and they remained closed overnight.

The biggest casualty was the roof of the old City Hall building at Broadway and Roosevelt Drive in Seaside that blew off.

Flooding south of Seaside caused U.S. Highway 101 to be closed overnight to all but trucks and large, high-profile vehicles, with a reported 1 foot of water on the roadway.

BAY CENTER, Wash. — Battling 70-knot winds and rain Monday night, the two-man crew on an oyster dredge ship had a harrowing experience trying to get from Bay Center to Nahcotta in extreme conditions.

At about 7 p.m., the 57-foot vessel’s skipper, Jim Kemmer, of Long Beach, broadcast a mayday call when his ship, Miss Claudia, overheated and lost power. They were headed toward Nahcotta but had turned back to Bay Center when the engine failure occurred, setting them adrift in Willapa Bay, said Mark Dobney, civilian search and rescue controller for the U.S. Coast Guard in Astoria.

The Coast Guard Air Station Astoria sent an MH-60 Jayhawk helicopter crew out to respond to the call for help, but it had to return when winds in Warrenton were 70 knots and even fiercer in the air, Dobney said.

The dredge drifted until it went aground on a sandbar north of Bay Center. Later, at about 10:15 p.m., the tide refloated the ship, and the engine was able to restart. The vessel Elia Ann helped guide Miss Claudia into Bay center because the dredger’s motor and propeller had sustained some damage. The crew was not hurt and made it into port later in the evening.

The Astoria tug Salvage Chief, veteran of salvage operations up and down the coast and in the Columbia River, was scheduled to start on another difficult job Wednesday.

The tug, skippered by Capt. Reino Mattila of Astoria, has been at the scene of the capsizing of a 210-foot Cascade Construction Co. barge in the Columbia River near St. Helens since early last week preparing to begin turning it upright.

The barge struck a bank and capsized on Oct. 30, dumping its load of gravel and sinking the 100-foot Knappton Towboat Co. tug Noydena. The tug has already been salvaged by the Salvage Chief and taken to Portland for repair, according to Knappton officials in Astoria.

Salvage of the Cascade barge, which weighs 498 long tons, will be “quite an engineering project,” according to Capt. Richard Ganon of Cascade.

The barge has “quite a large superstructure” and considerable machinery, he explained, and the overturning operation will involve a series of counterweight and riding arm levers.

This procedure, combined with ballasting and pumping of the hull, is designed to protect the superstructure from damage during the overturning.

Drizzling rain and gale winds provided a fitting welcome for an official arrival of the U.S. Coast Guard cutter Tupelo to the Columbia River Aids to Navigation service during change of command ceremonies at Tongue Point Coast Guard base in Astoria Friday.

The new cutter, a 180-foot buoy tender formerly based in Toledo, Ohio, arrived at base Astoria Monday, following an 8,000 nautical mile journey out of the St. Lawrence Seaway from its dry dock station at Sturgeon Bay, Wisconsin, where it underwent extensive repairs.

A clerk and an official of the Retail Clerks Union, Local 1092, picketed the 88 Cent store in Astoria today during a controversy over union representation. The union official, Michael Swope, of Portland, said the “major purpose of the pickets was because 88 Cent hadn’t signed a pay contract with the clerks yet.”

The 83rd anniversary of the founding by pioneer Astoria “Finns” of the local Finnish Brotherhood Lodge will be celebrated Saturday at Suomi Hall with a program of music and speeches, refreshments and dancing beginning at 7 p.m.

The executive committee of the Astoria Downtown Planning Committee spent most of its Thursday night meeting talking about the city’s parking problems and what to do about them. The verdict: Gather more information and try to work something out.

“The housing situation in the Clatsop County area will grow more critical as the naval hospital expands,” said Daniel D. Gage, a rent executive for the Portland branch of the Office of Price Administration. Gage is here on a two-day inspection visit. “It is our experience that problems of rent control are in direct proportion to the pressure for housing. And now that the pressure is increasing we find more incidents here of noncompliance with the federal rent regulations.”

Gage said the increasing pressure on local rents has resulted largely from influx of persons attached to the big Navy hospital and by new population in Astoria among people from outside taking up temporary residence in connection with the hospital. He said the problem has become serious enough probably to warrant attention by OPA’s rent enforcement division, which will take a close look at Astoria rents.

Official count of votes cast in Clatsop County revealed that the Roosevelt-Truman combination defeated the Republican Dewey-Bricker team here by 2,117 votes, 6,038 to 3,921.

A second meeting of organizations interested in helping the U.S. naval hospital has been called for Monday evening at 7:30 p.m. at the Chamber of Commerce, according to Mrs. A.J. Antonich, chairman.

Many groups were not represented at the first meeting and Mr. Antonich is asking that men and women from fraternal, social, church, grange and labor groups attend. Seven permanent committees will be named at this time: entertainment, recreation, athletics, books and magazines, crafts and publicity and representatives of each organization should be prepared with names of persons capable of serving on each of these committees.

Some of the first American troops to go overseas after Pearl Harbor — member of the “Northwest’s own” 41st division — have checked in at the war department personnel center at Fort Lewis.

Condition of Judge Guy Boyington, admitted to St. Vincent’s hospital in Portland Friday night seriously ill, is said to be encouraging today with plans for an emergency operation scheduled for Saturday afternoon awaiting developments. Judge Boyington, a visitor in Portland last week attending a meeting of officials of the Association of Oregon Counties, was stricken suddenly ill with a kidney or bladder disorder late Friday night at a hotel and rushed to the hospital for treatment.