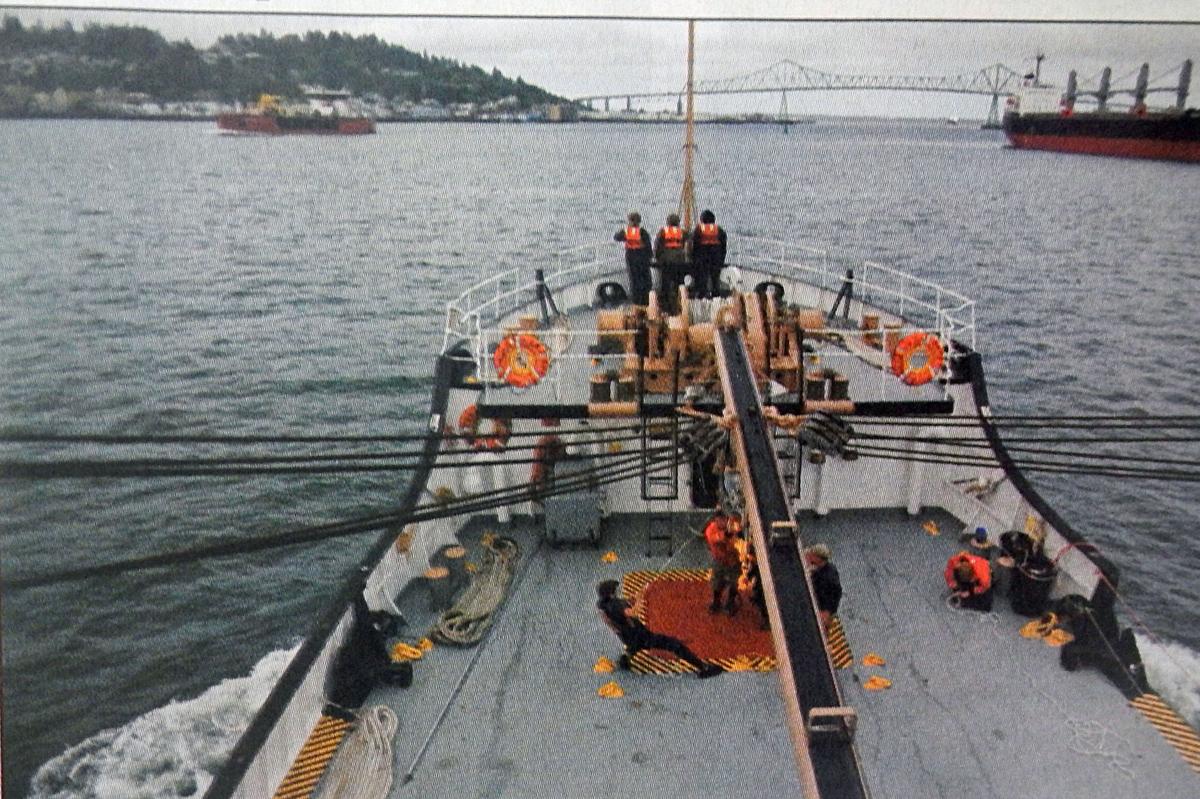 2009 — The Tongue Point Job Corps Center buoy tender Ironwood navigates downstream Tuesday on its way to place a wave buoy outside of the Columbia River Bar. 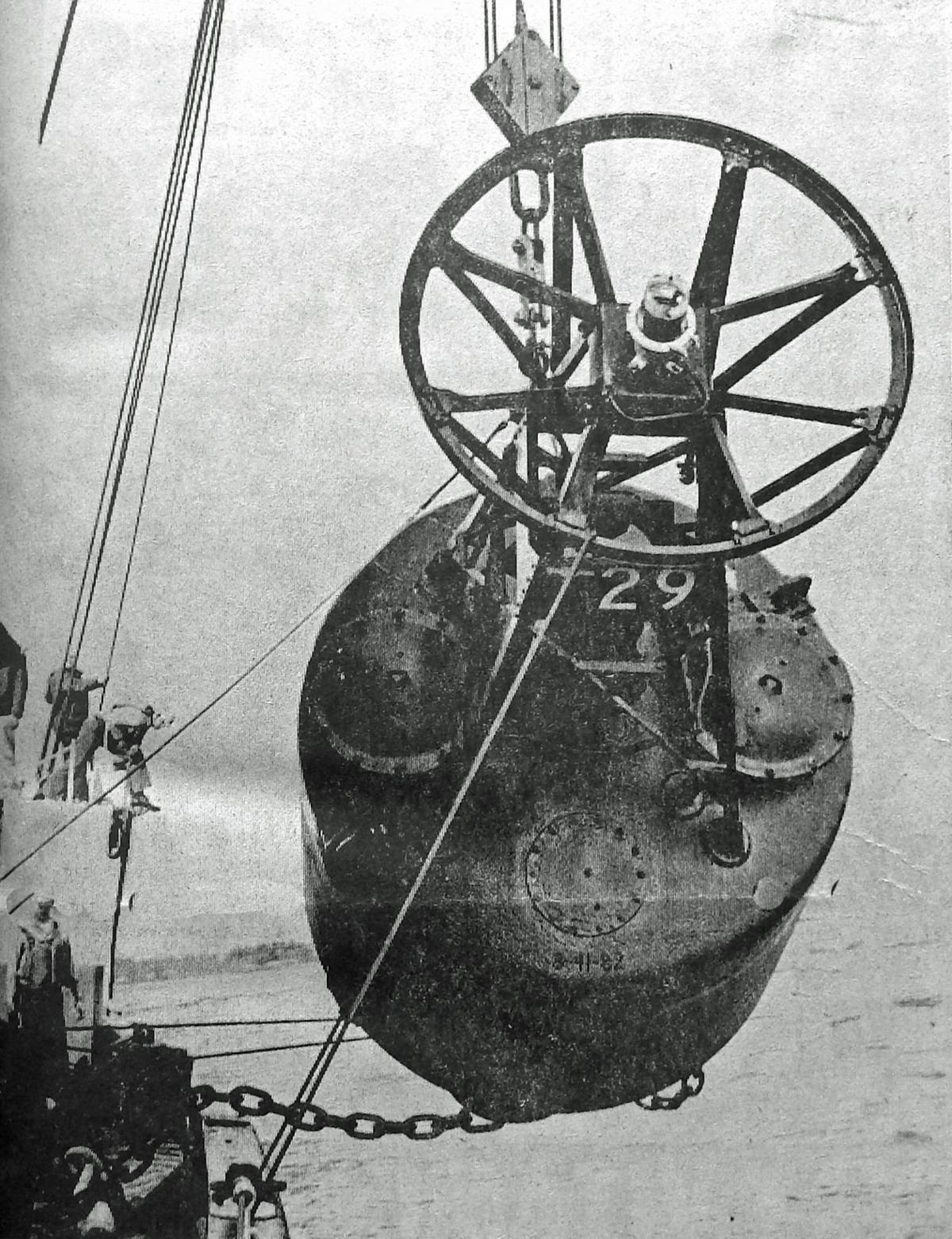 1969 — Near the climax of buoy handling operations as new Bouy 29 heads for its watery home. 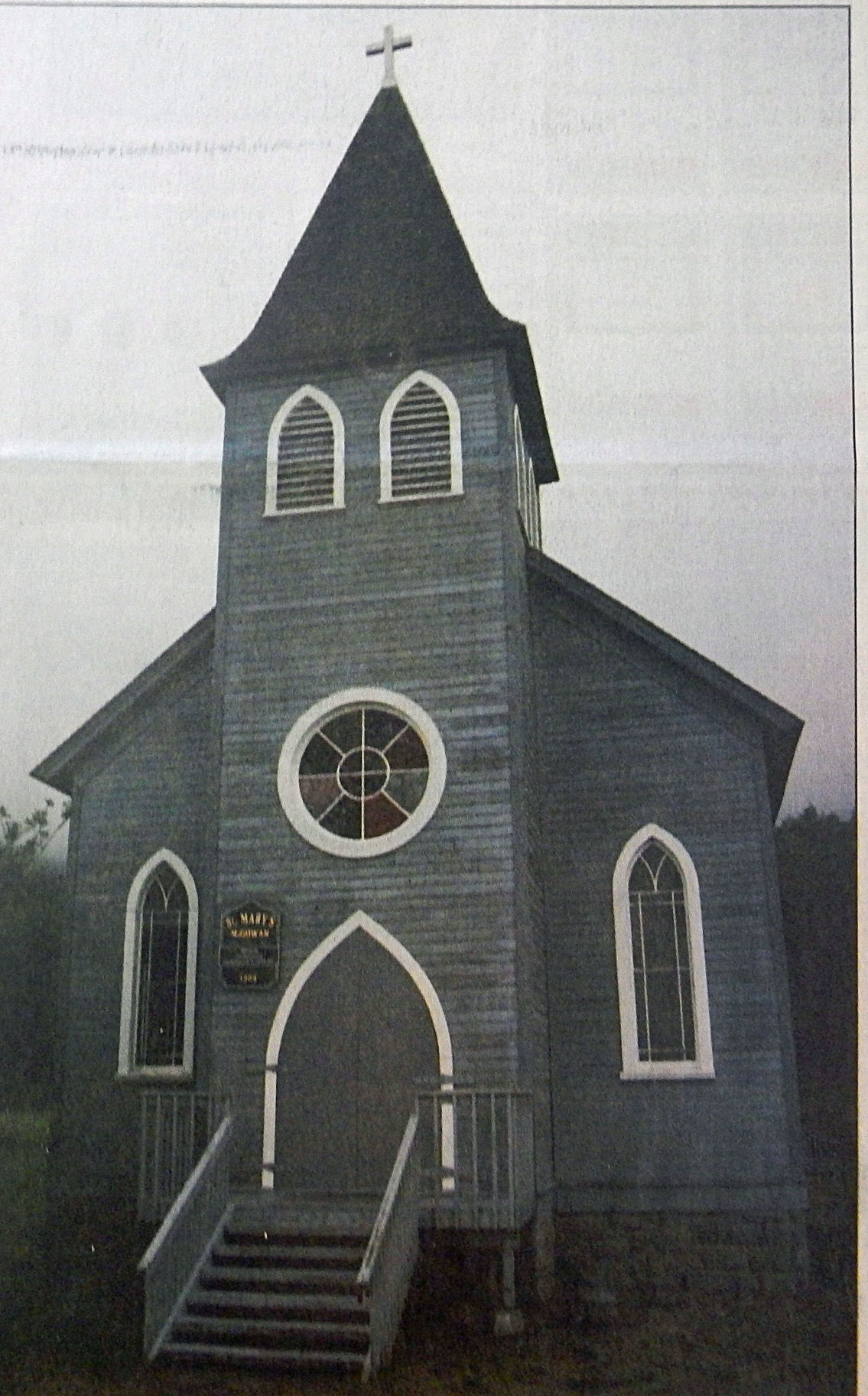 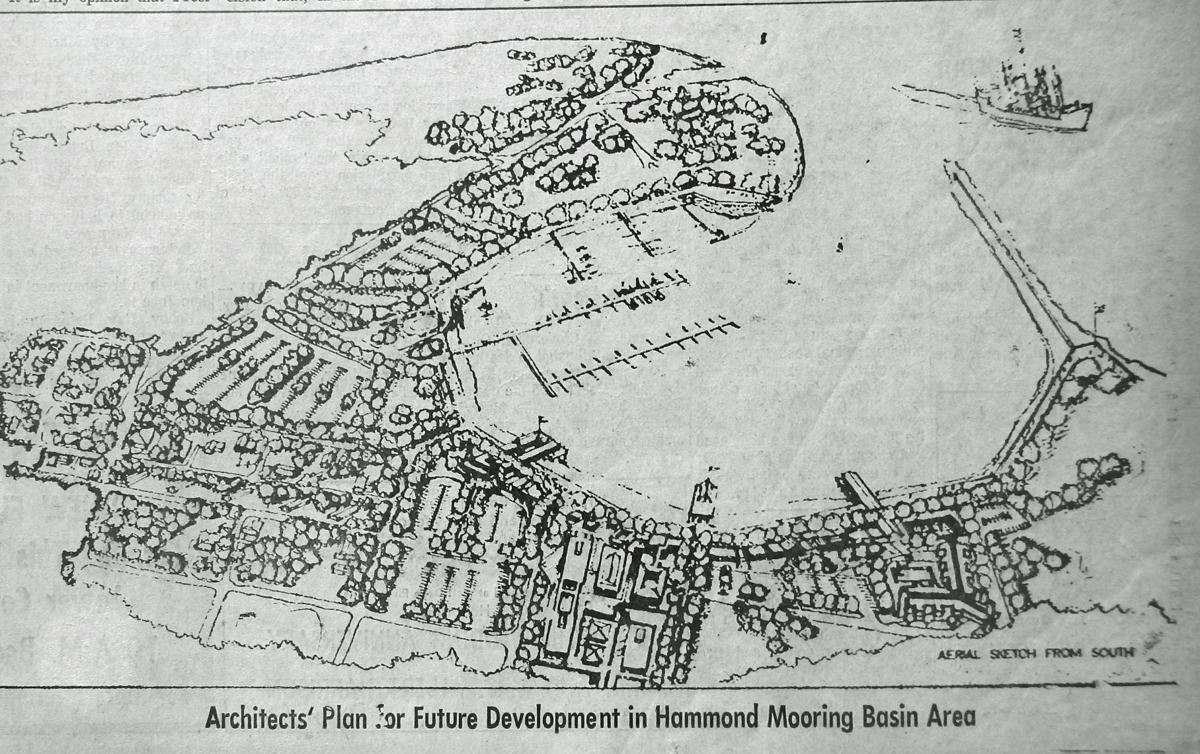 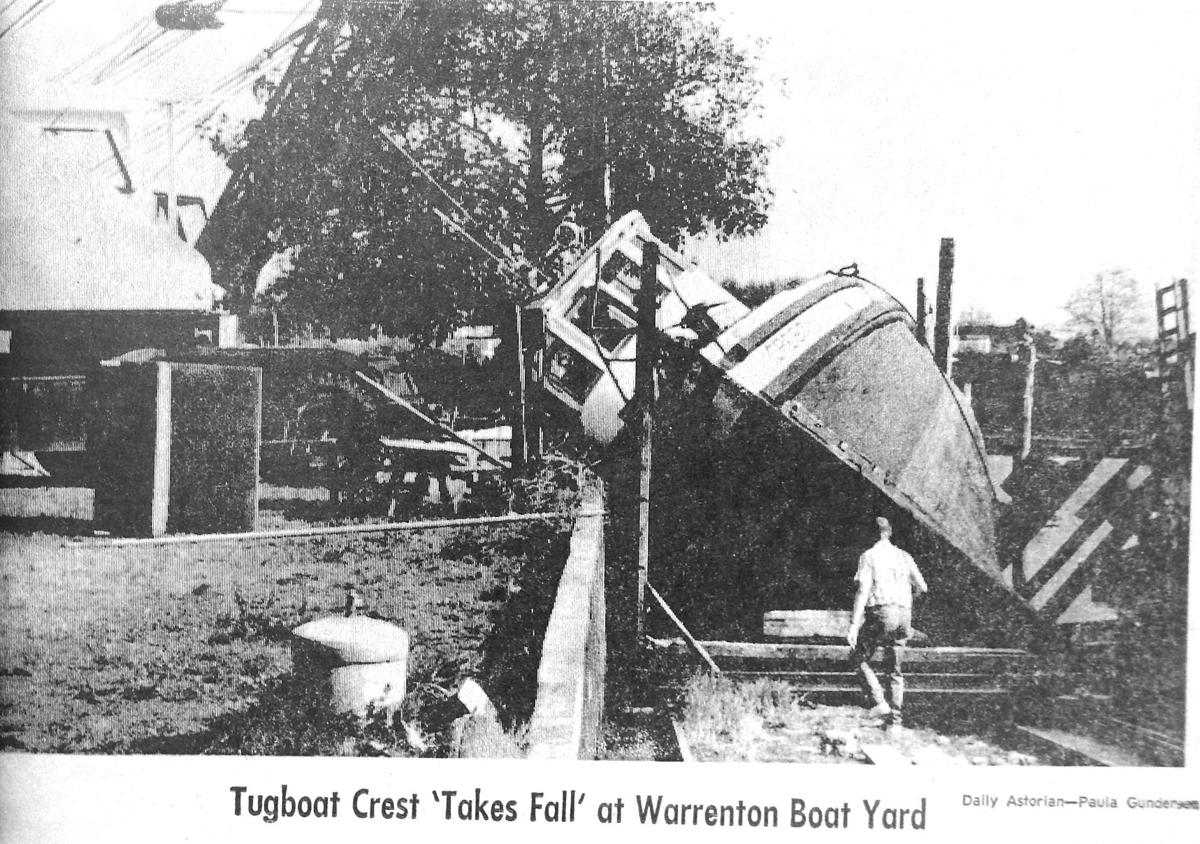 2009 — The Tongue Point Job Corps Center buoy tender Ironwood navigates downstream Tuesday on its way to place a wave buoy outside of the Columbia River Bar.

When 60 Tongue Point Job Corps Center seamanship students got underway on the 180-foot cutter Ironwood, they knew they had special cargo onboard.

It was round, bright yellow and weighed 450 pounds.

Strapped down to the buoy dock of the former U.S. Coast Guard buoy tender, it looked like a giant, lemon-colored gumball. The students were helping install a much-needed wave buoy off Clatsop Spit just outside the Columbia River Bar.

For years the focus of the National Park Service, particularly in natural regions, has been to allow nature to take its course. But in places like Lewis and Clark National Historical Park’s Netul Landing, which was an industrial area for more than 150 years, the ability of the site to repair itself has been removed.

Hundreds of years of operating trains and trucks on top of hauled-in fill has transformed the property.

But construction of picnic areas and grass-covered sections along the site’s southern end will complete a new transformation park leaders started almost six years ago.

Contractors completed development of the north end of the site alongside the Lewis and Clark River at the site of a former log-sorting yard in time for the 200th anniversary of the arrival of Lewis and Clark Expedition in 2005.

The Port of Astoria Commission voted unanimously Tuesday to execute a lease option on the North Tongue Point industrial facility in Astoria.

The deal, once signed by the Port and property owner Washington Group of Missoula, Montana, will allow the Port to lease the site while building revenues and working toward a possible purchase.

The Port has been trying to buy North Tongue Point for more than a year, but now Port Executive Director Jack Crider says a lease option is “the only option available to us.”

He said the facility — which includes five finger piers and 140,000 square feet of building space used by the U.S. Navy during and after World War II — doesn’t generate enough revenue to cover the debt service on a mortgage as well as the costs of operating and maintaining the site.

McGOWAN, Wash. — Little remains of McGowan, the Washington town that bears the same of an entrepreneur who built a salmon pickling and packing plant along the Columbia River in the mid-1800s.

Roads are all grown over. Only a few buildings are left. One sturdy sentinel, St. Mary’s Catholic Church, still stands resolutely facing the river, but after 105 years keeping watch over the river, its days might be numbered.

But the church’s resilience to weather is weakening, and churchgoers hired Kevin Palo, of Ilwaco, to slow the damage by making repairs to church windows.

Over the years, ill-informed repairmen have tried to caulk the windows, but caulk doesn’t stay sticky very long and loses its grip in the wood or glass, allowing water to pass through.

Palo is basically reglazing the old, nearly 8-foot tall windows, pressing linseed oil putty into the joints where the glass panes in the window meet the wood.

The men of the U.S. Coast Guard buoy tender Ivy set out one day to show their wives, girlfriends and other guests “what they do all day.”

Their skill and ballet-like precision in buoy handling made an undoubtedly very difficult and often dangerous job look easy.

Occasion was the Ivy’s dependents’ cruise, with about 25 guests aboard.

Hammond Mooring Basin has come a long way since it was a “little slip full of mud” in 1959. Hopes are that it will go much, much further. Total number of launchings have increased from 411 in 1959 to approximately 5,350 this year.

Because of the location and possibilities here a request was made by the Port of Astoria that the U.S. Army Corps of Engineers make a study of the basin at Hammond. Just a few weeks ago, Wendell Wyatt’s office received verification from Robert L. Bangert, colonel, Corps of Engineers, that authority and funds to make the study have been received.

Work will proceed on a preliminary report currently scheduled for 1970 that will include study of the necessary building or rebuilding of breakwaters and a study of the basin’s perimeter.

Charles Davidson of the Fish Commission’s Portland office commented, “That’s ridiculous. We don’t have figures on illegal catch and I think he pulled his figures out of thin air.”

Davidson characterized the column, written by Don Holm, outdoor writer for The Oregonian, on extent of fishing piracy and minor penalties given those convicted as “really an insult to the state police. They’ve been working very hard.”

He added that he felt there was no need to make an estimate because he believed that what little illegal salmon fishing did go on was “not that significant.”

A routine maintenance job turned out to be quite a shock to workers at the Warrenton Boat Yard and to the owner, George J. Perreault, of Portland. A 56-foot tugboat, the Crest, fell to one side when it was being brought into the boat yard for a yearly maintenance and repair job.

A comprehensive report covering activities of the U.S. Naval Air Station at Tongue Point from June 1943 until the present has been approved by the 13th Naval District and was released today after Capt. John E. Beck turned over command of the station to Com. H.J. McNulty.

The report reveals the important part the naval air station has played in connection with the precommissioning activity of the naval station at Astoria’s port docks.

Merle R. Chessman, editor and manager of the Astorian-Budget, told the Astoria Kiwanis Club Thursday that a newspaper “should be a very active part of a community’s life; that it should try to make itself a vital and constructive force for the community’s well-being and should be a spokesman for its community to champion all its legitimate causes and interests.”

Chessman was speaking upon occasion of his 25th year in Astoria, and also in connection with the Kiwanis Club’s recognition of National Newspaper Week, which closes Sunday.

The Astoria publisher reviewed some journalism history of the state and of Astoria, tracing the appearance and disappearance of many newspapers here and their changing ownerships. He said Astoria had its first newspaper in August 1864, with establishment of the Marine Gazette founded by James Newton Gale. He said the Budget was founded in October of 1892 by O.W. Dunbar.

The weekly Astorian was founded in 1873, later published three times weekly and subsequently was published daily after May 1, 1876.

Hoarders were left today holding bags of coffee that will soon be stale as the government put its foot down hard on rumors that the nation’s favorite beverage would soon be returned to rationing.