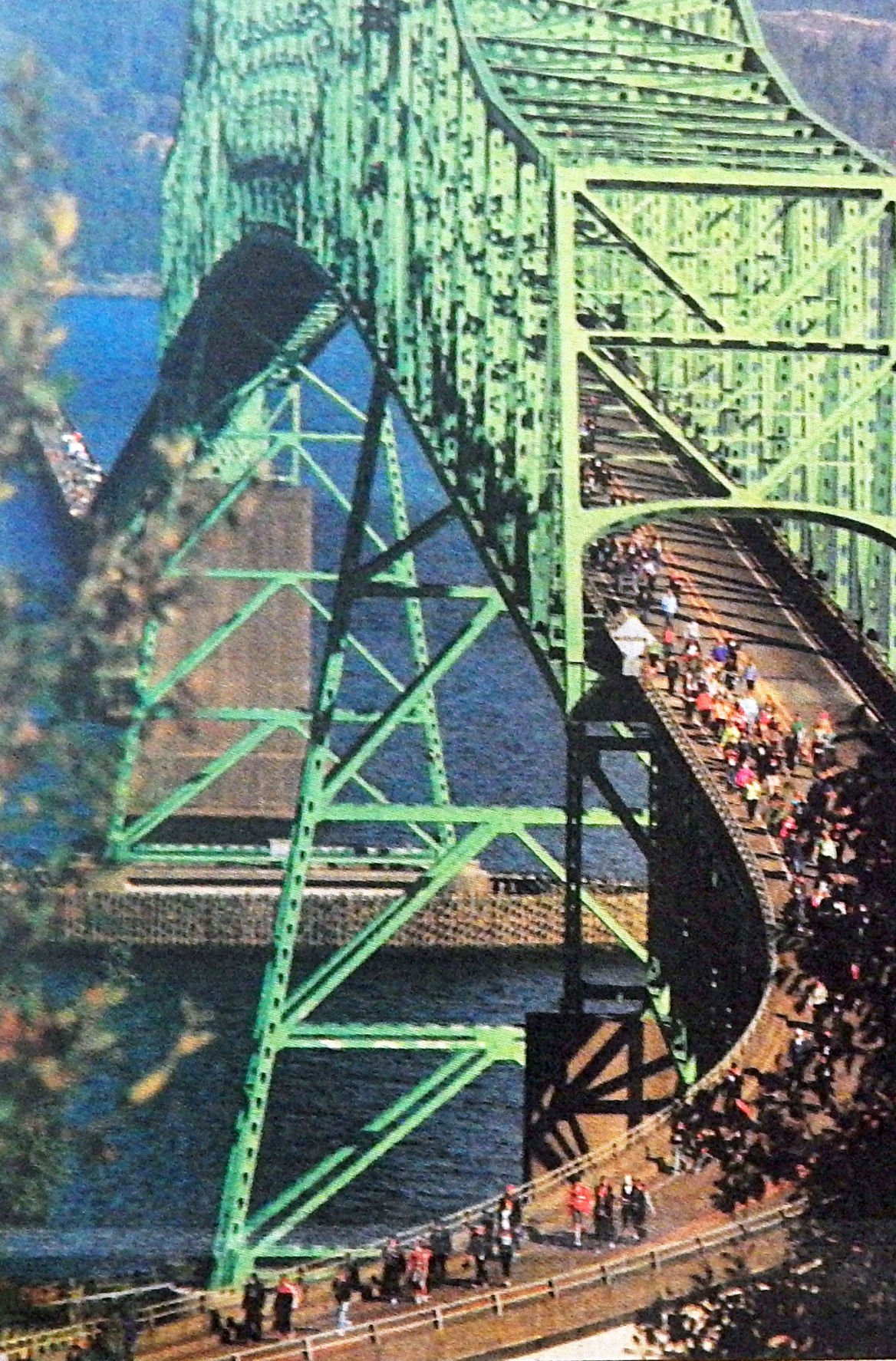 Runners and walkers in this year’s Great Columbia Crossing were greeted by sunny skies as they climbed and descended the span of the Astoria Bridge crossing the Columbia River from Washington into Oregon. 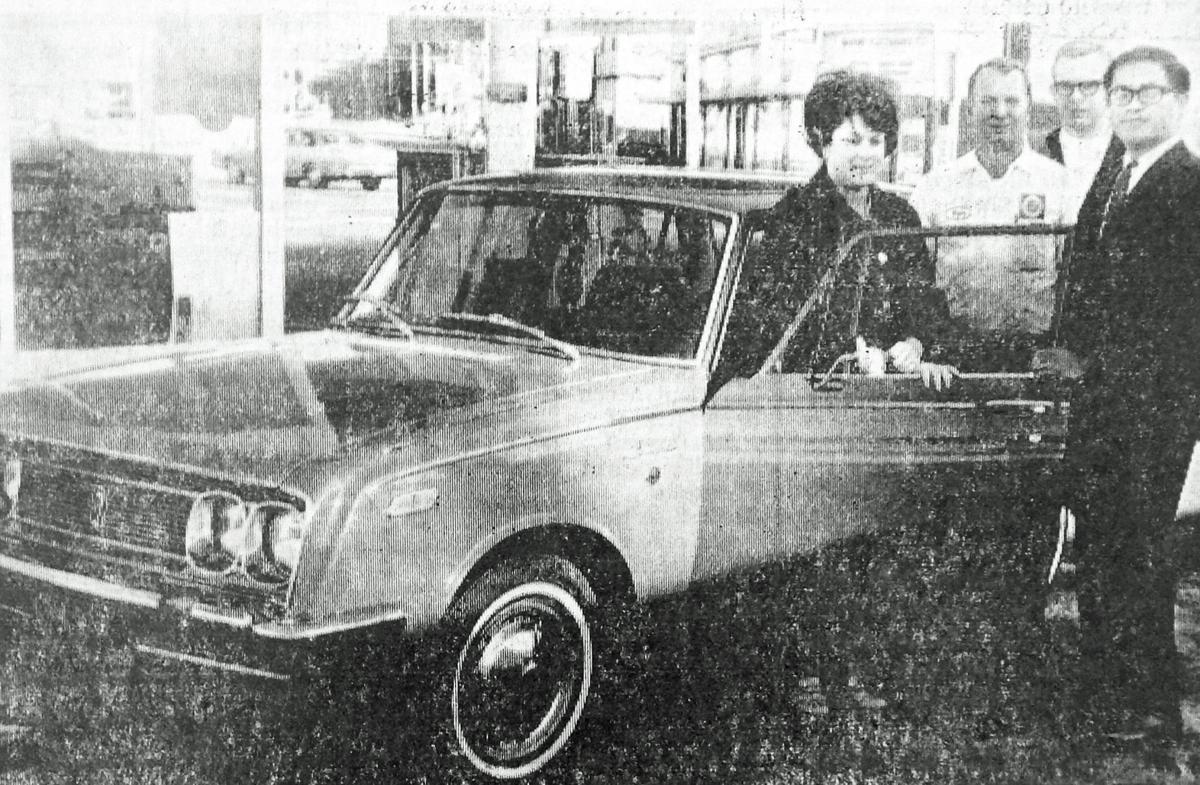 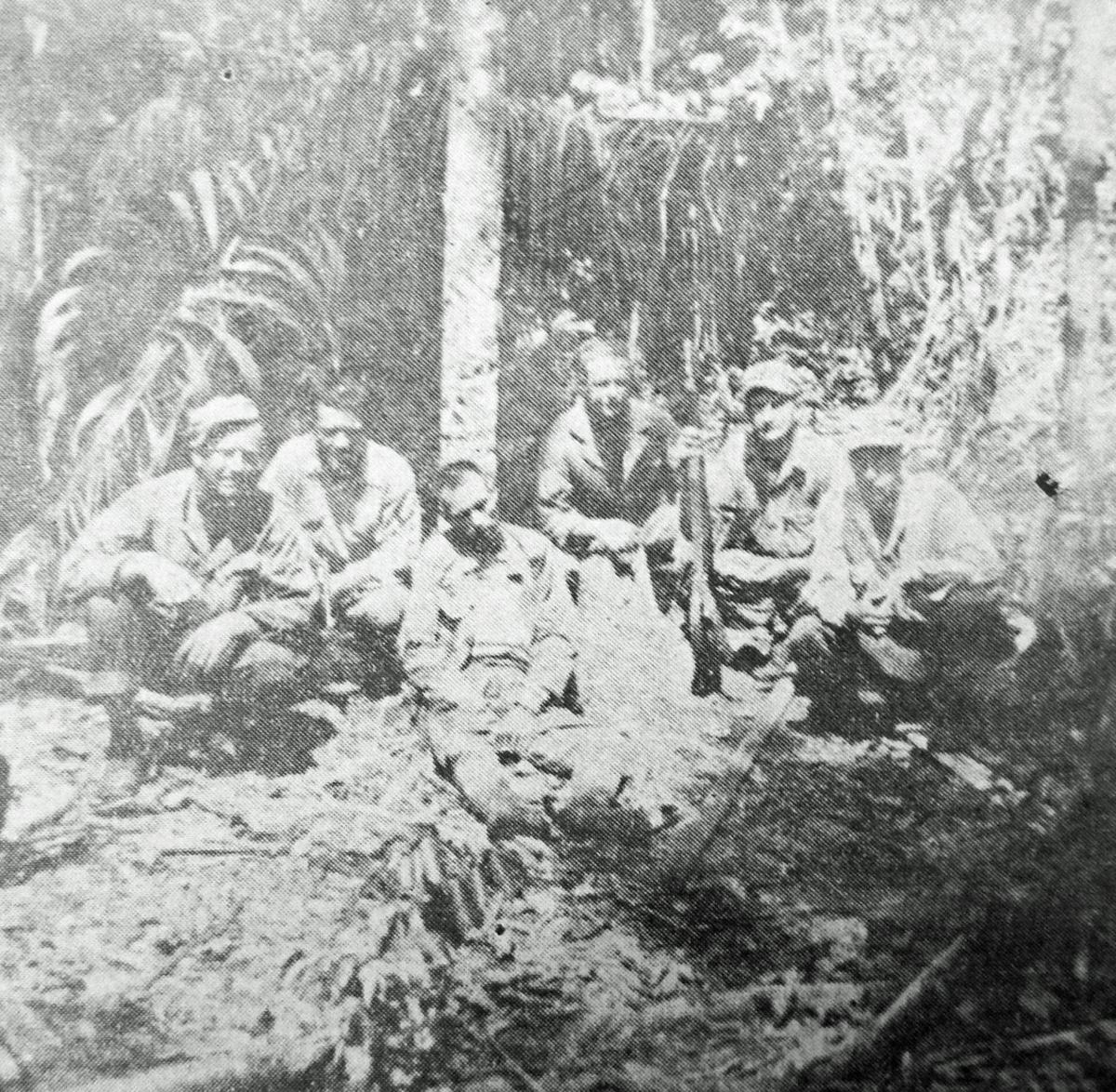 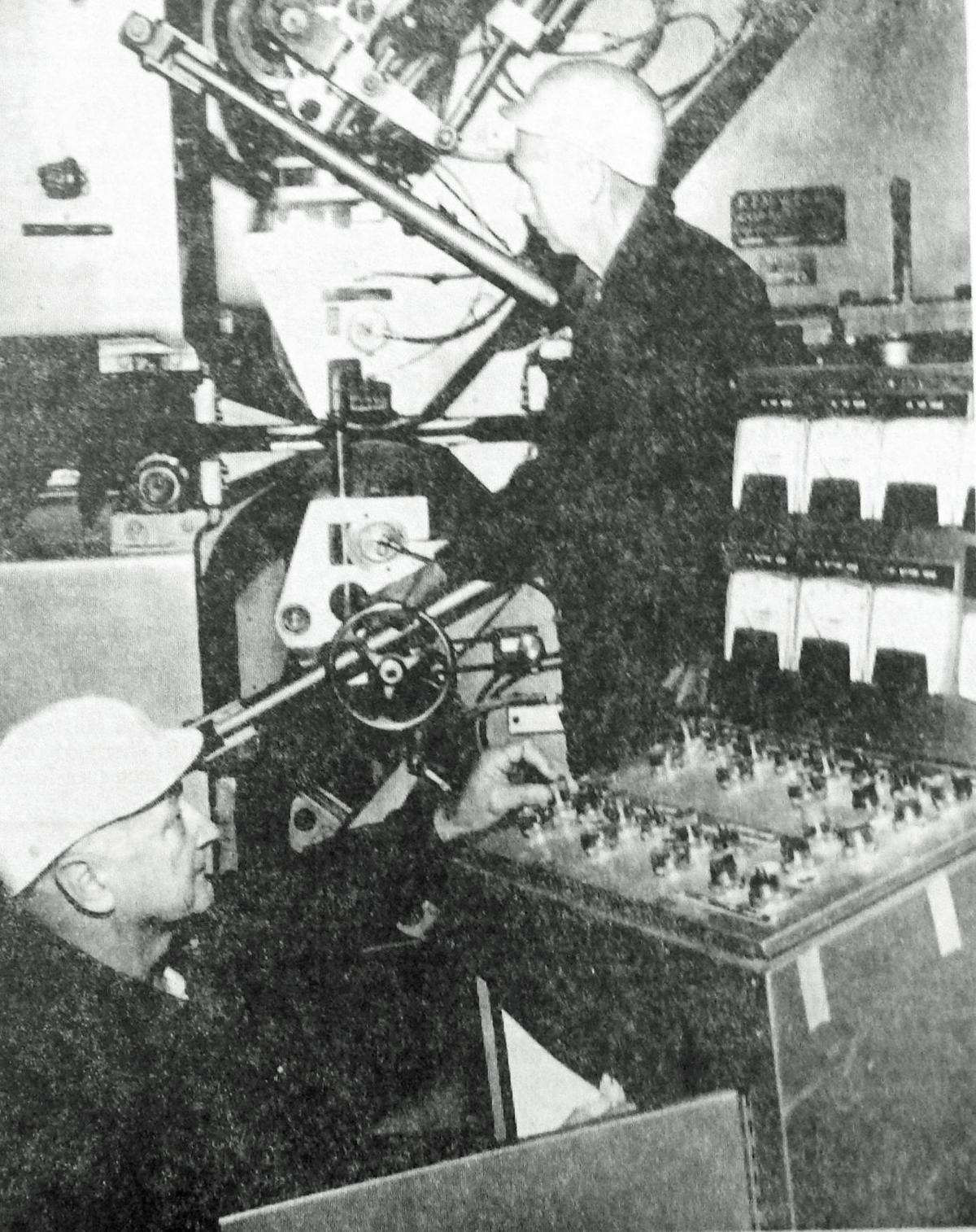 Runners and walkers in this year’s Great Columbia Crossing were greeted by sunny skies as they climbed and descended the span of the Astoria Bridge crossing the Columbia River from Washington into Oregon.

It’s October so everything shuts down, right? Not! The action on the North Coast was almost constant this weekend. Blind Pilot, a Portland-based group with strong Astoria ties, played to a large audience at the Liberty Theater.

Saturday it was all fun and games with an October flavor at the Great Pumpkin Drop Off, which attracted a solid crowd of folks to Seaside eager to see how much damage a pumpkin dropped from a great height can make.

Then on Sunday, thousands were bused across the Astoria Bridge to take part in the 28th annual Great Columbia Crossing. The 4.1 mile-long bridge is typically open to vehicle and cycle traffic year-round, and pedestrians are banned for safety reasons, so it was a rare opportunity for folks to climb up the longest continuous three-span through-truss bridge in the world, rising 205 feet above the Columbia River. Those who took part either ran a 10K or walked.

For Cmdr. Brad Mynatt, recently made captain of the U.S. Coast Guard Cutter Alert, working in his new hometown of Astoria this summer wasn’t easy.

The alert, though based in Astoria, has been out of water and thousands of miles away since April, leaving Mynatt somewhat unsettled.

“For a sailor the hardest part is to be without a ship,” Mynatt said.

Alert arrived at the Coast Guard yard in Curtis Bay, Maryland, in early April, and since then has undergone $7 million in major structural repairs and renovations. Equipment on board was upgraded significantly, increasing the efficiency and cost-effectiveness of day-to-day operations – making the alert easier and cheaper for its 75-person crew to maintain and repair.

But Mynatt and his crew have kept productive as the months passed, making sure that when alert is back on the job in December, everything is functioning in tip-top shape for the long trip through the Panama Canal and back up the Pacific coast.

ConnectOregon funds – Oregon Lottery dollars set aside for transportation projects – are reshaping the way the Port of Astoria does business.

This year – competing with only one other deep-water port in the Port’s region – commissioners hope they’ll be able to land a number of grants to enhance shipping to and from Astoria.

City Manager Bob Maxfield told members of the Warrenton City Commission Tuesday it will take a few more days to deal with an algae problem that has plagued the city’s drinking water supply for weeks.

The water, which Warrenton sells to Gearhart and some other users, is safe to drink but has had unpleasant taste, leaders said.

“Planning is becoming more and more important,” said Curry in enumerating the areas in which Long will work. He noted the proposal to revise the city’s business section (on which a citizens committee will start work this Wednesday night), proposals for a new ongoing ordinance, a new land-use plan, a new subdivision code for the city, planning of a city-county government center in Astoria and the work of the newly organized Clatsop Intergovernmental Council.

Construction of a prefabricated steel building to expand facilities of the the Astoria Plywood Mill is virtually finished this week, according to Don Webb.

Installation of a high-speed wide-belt sander in the 30,000 square foot building was expected to be completed this week, according to Webb.

Peter Pan Seafood, Inc,. Seattle, in a presentation to the Port of Ilwaco Monday night, proposed a lease agreement with the port district property for a new multi-purpose fresh and frozen processing seafood plant in Ilwaco. Estimated cost of the proposed buildings was $1.5 million.

An improved market for hemlock logs in Japan has reversed an expected October export slump at the Port of Astoria.

Early this month, Rees Williams, assistant port manager, said he anticipated that only three log ships would call at the port during the month.

Japanese shippers said improvement in the market resulted from a slight drop in price of hemlock.

The Kerr Grain Corp. official managing the Port of Astoria’s grain elevator told the port commission Tuesday night that the joint Kerr-port operation has been successful in its first six months.

Dick Berger told the commissioners that some new business has been moving through the port because of the elevator but that the elevator must prove itself to shippers and manufacturers before big things will happen.

A Port of Astoria warehouse adjoining the Pillsbury mill plant was partially wrecked Monday afternoon when a freight car being switched around by a Spokane, Portland & Seattle Railway train crew crashed through the wall of the building.

The empty car was on the end of a line of seven or eight freight cars the engine crew was placing in position for loading from the Pillsbury mill. The “dead man” block at the end of the railway spur track gave way when the cars struck the obstruction accidentally, the last car in the line continuing on its way beyond the barrier and for 16 feet into the warehouse.

Help was still needed this week in the cranberry harvest, according to County Agent Don Jossy. Both scoopers and pickers are in demand.

Regular part-time assistance will be accepted, Jossy said. The harvest is expected to run into the middle of November, and to be successful barring frost. Rains do not hamper harvest, but frost may ruin the crop.

Pvt. Elmer H. Raymond, son of Mrs. Garfield Raymond of Jewell, was the only member of his company of the 116th engineers to capture a Japanese prisoner in New Guinea, according to a recent letter received from him enclosing the above picture. Private Raymond is the second from the left and the prisoner is propped against the tree.

Raymond wrote his mother that he had more trouble taking the Japanese flag away from the enemy soldier than in removing his gun. The engagement in which he took the prisoner occurred May 7 on Biak island.

U.S. AIR BASE, England – Rep. Ranulf Compton, R., Connecticut, said today that the Allied high command schedule never had contemplated completion of the European war in 1944 but the American people had been deluded into believing victory this fall was probable.

Twenty-two of the 61 Navy attack transport ships being built at Kaiser’s Portland and Vancouver shipyards have been delivered by Kaiser to the Navy at Astoria as the upriver yards remain on their production schedule in the face of lagging production in other U.S. yards, it was learned today.

Congressman James Mott told one of the largest luncheon meetings of the current political campaign Thursday that the Congress of the United States has come a long way from the subservient days of 1933 to regain its independence and dignity as a vital branch in representative government.