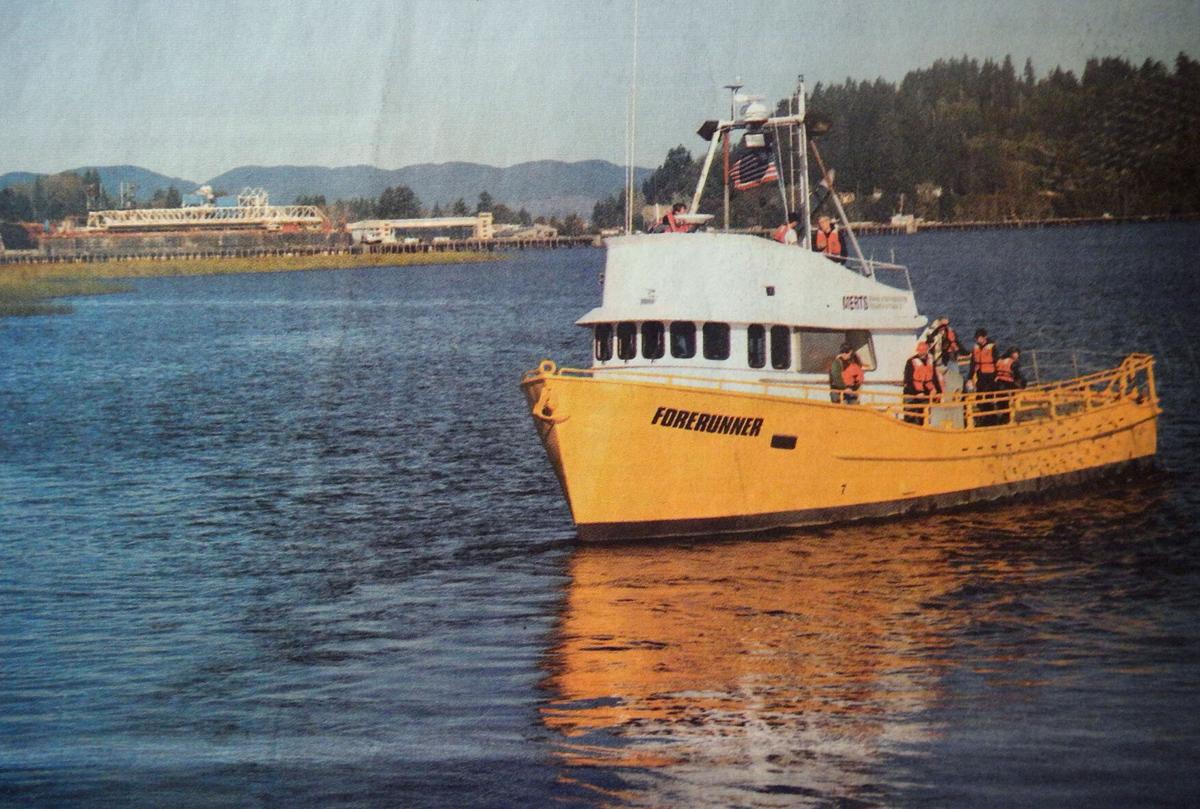 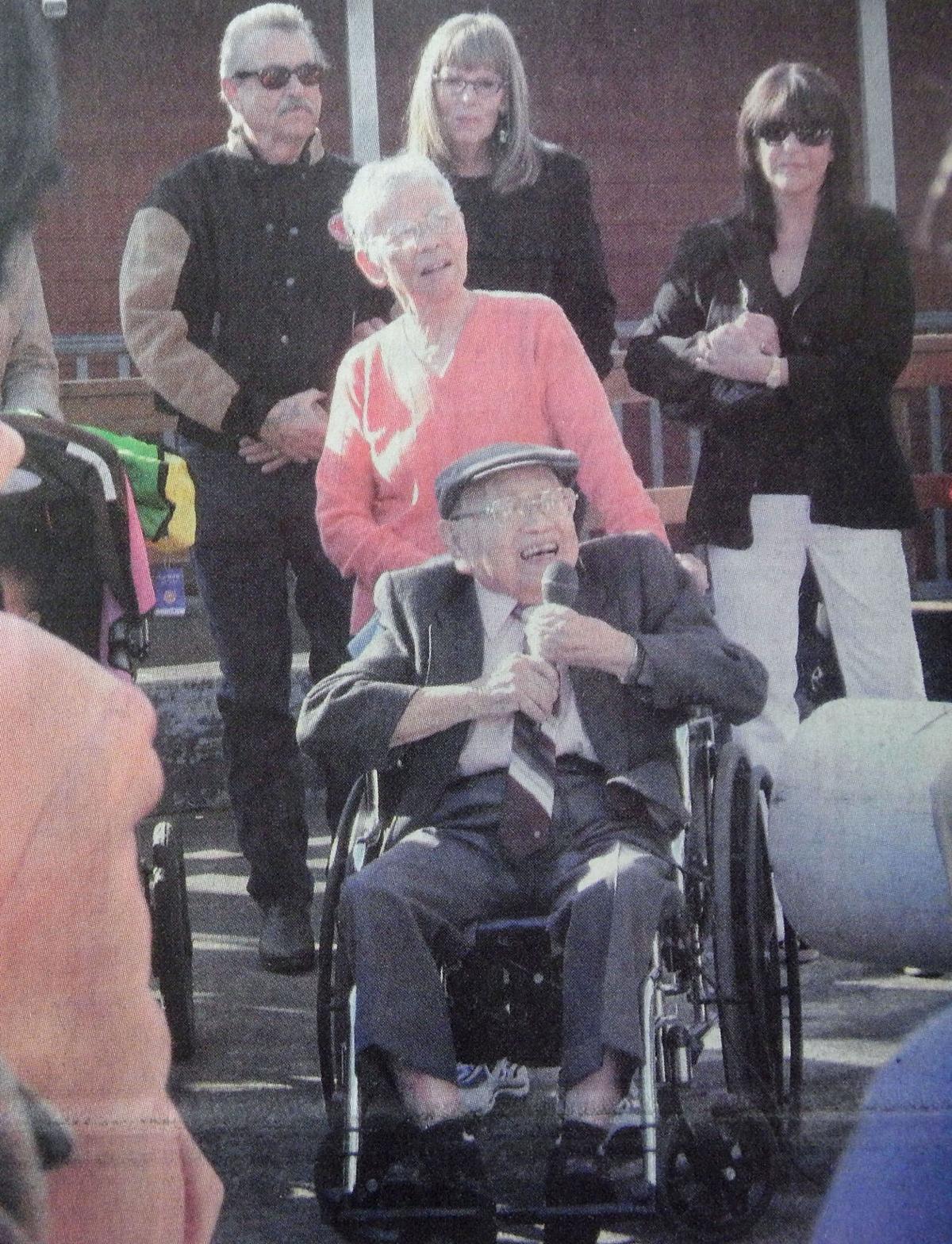 Duncan Law gave the blessing at the unveiling of the Chinese artwork for the Garden of Surging Waves in 2010. 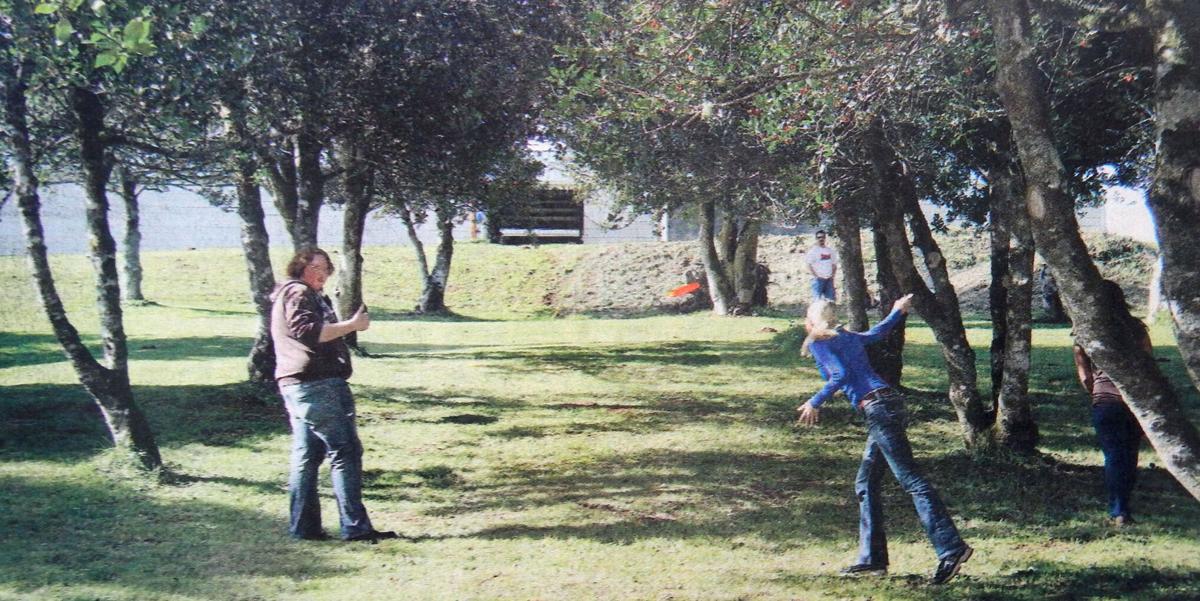 The disc golf course at the Clatsop County Fairgrounds in 2010. 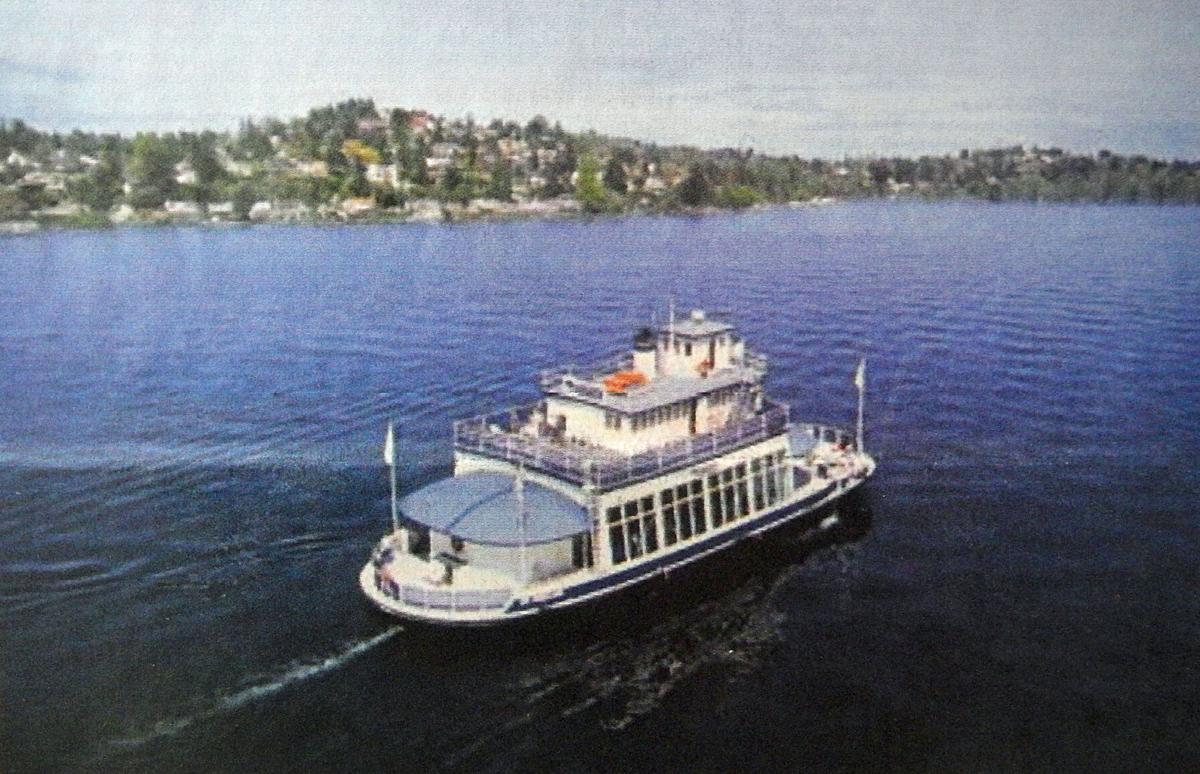 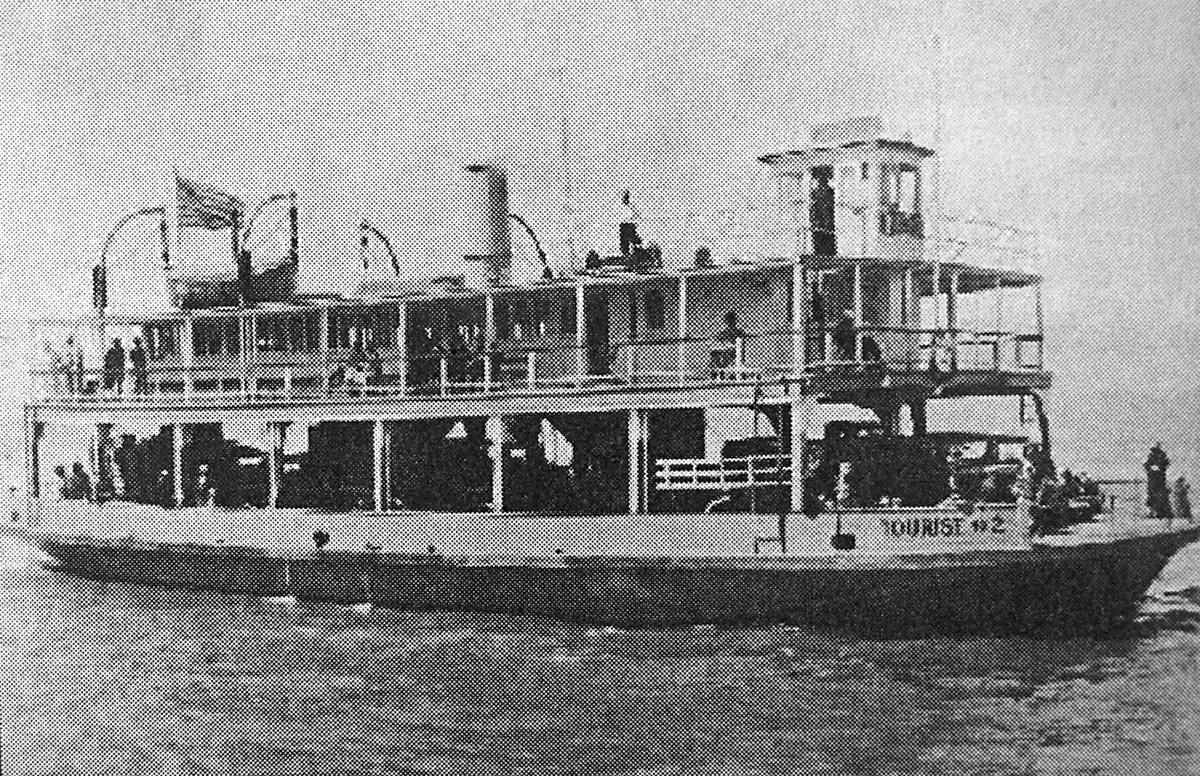 The Tourist No. 2 ferry took passengers back and forth from Astoria to Megler, Washington, for 20 years. 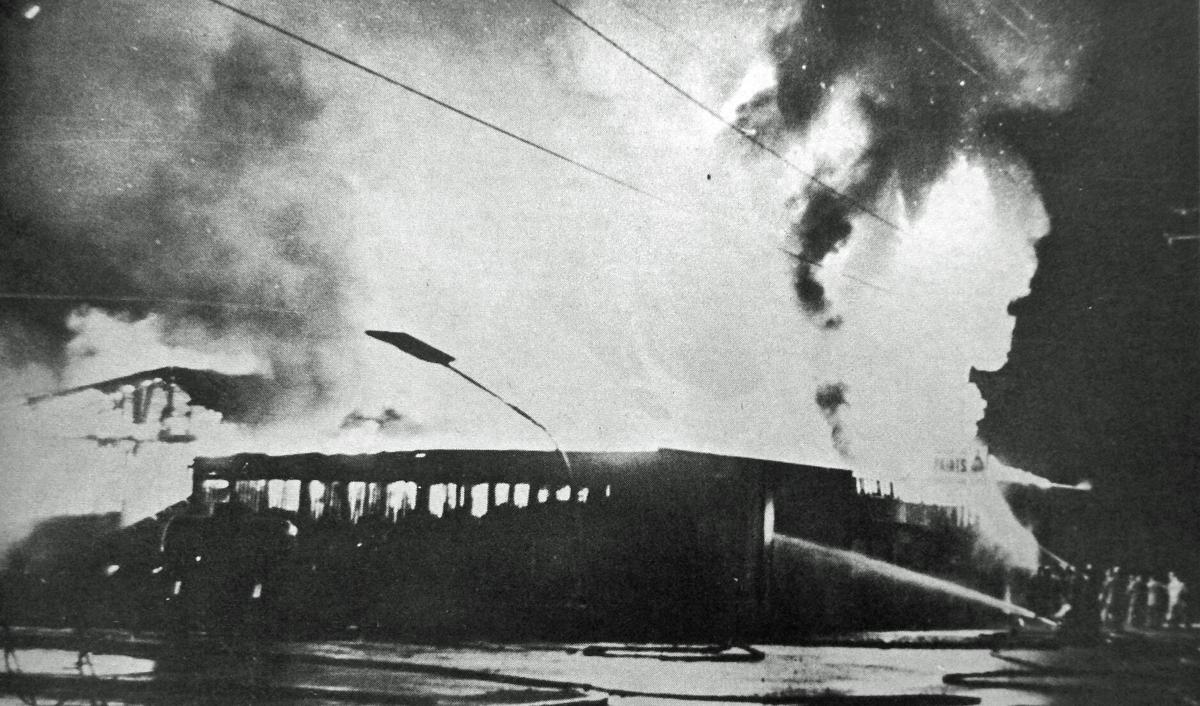 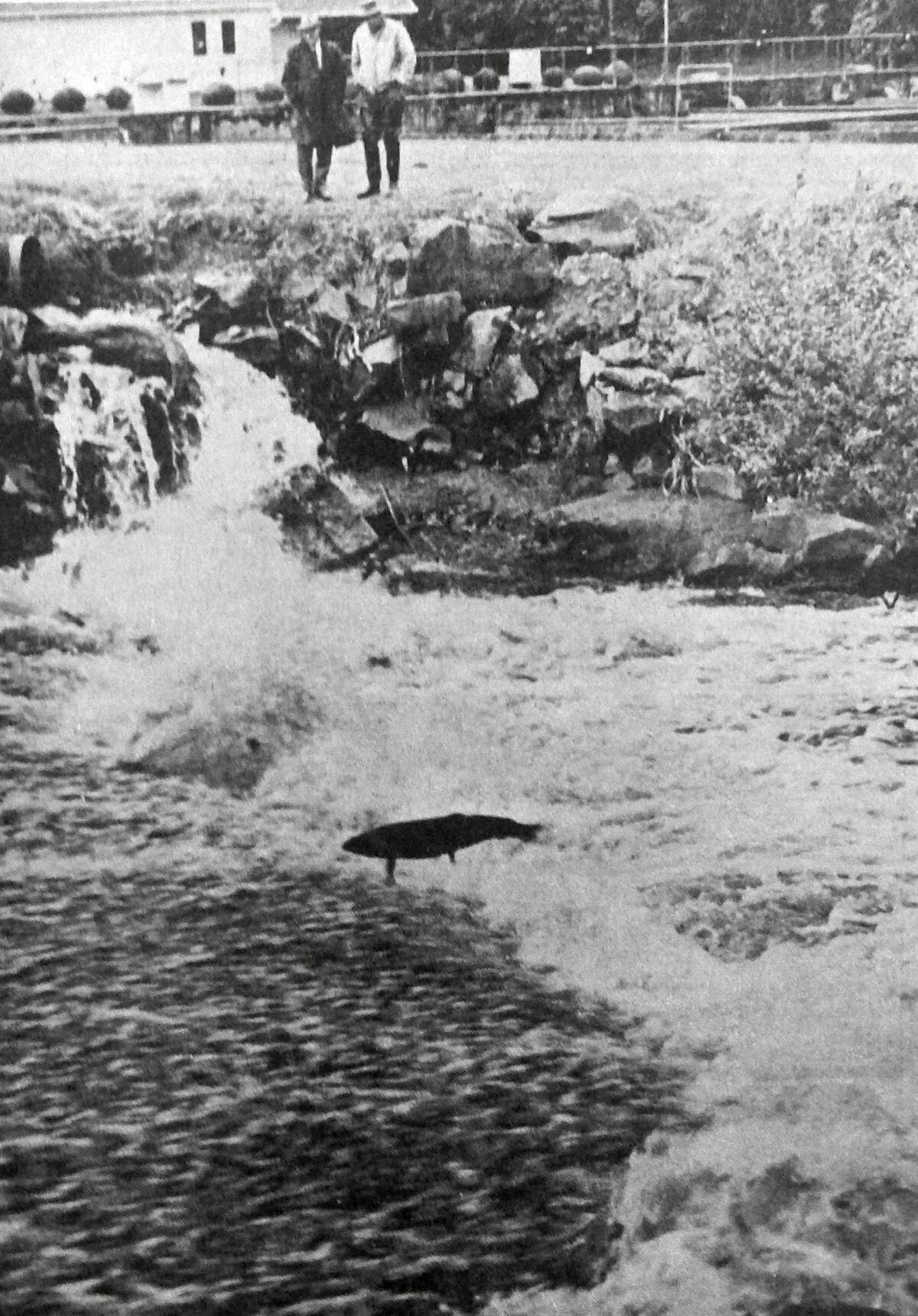 Heavy rains dumped enough water into the Klaskanine River for the mass of coho salmon, which had been milling around at the mouth in Youngs Bay, to make their upstream spawning migration to the state’s Klaskanine Fish Hatchery in 1970.

Duncan Law gave the blessing at the unveiling of the Chinese artwork for the Garden of Surging Waves in 2010.

The disc golf course at the Clatsop County Fairgrounds in 2010.

The Tourist No. 2 ferry took passengers back and forth from Astoria to Megler, Washington, for 20 years.

Heavy rains dumped enough water into the Klaskanine River for the mass of coho salmon, which had been milling around at the mouth in Youngs Bay, to make their upstream spawning migration to the state’s Klaskanine Fish Hatchery in 1970.

The Garden of Surging Waves artwork was opened for public viewing Saturday at its temporary home at the former Englund Marine & Industrial Supply building, where the hand-crafted pieces are being stored.

The unveiling of the sculptures doubled as a chance for Astoria community leaders and Chinese garden organizers to ramp up enthusiasm with the nearly 200 people who turned out for the celebration of the bicentennial legacy gift project. It will be built at Ninth and Astor streets, once funding is secured.

Duncan Law, who the Oregon State University Seafood Research & Education Center was named after, was among those in the spotlight for his efforts to make sure the Chinese contribution to the city was finally recognized.

Unless a white knight gallops to the rescue, a 1924 wooden-hulled ferry that served Astoria as Tourist No. 2 for 20 years, taking passengers and cars between Astoria and Megler, Washington, may be sent to the scrap yard.

It would mark the end for the 110-foot long, 36-foot wide, 95-ton vessel, which was on both the National Register of Historic Places and the Washington Heritage Register, and even made a cameo appearance on ABC’s “The Bachelor” in 2008.

The vessel spent its early years as a ferry on the Columbia River but was commandeered by the U.S. Navy to lay mines at the mouth of the river after the bombing of Pearl Harbor in 1941. Also during World War II, the U.S. Army used it as a ferry between Fort Canby, Washington, and Fort Stevens.

After the war, the state took the vessel over for use between Astoria and Washington state. When the Astoria Bridge was completed in 1966, Tourist No. 2 was sold to the Pierce County transit system in Washington, renamed Islander of Pierce County, remodeled and used for runs in Puget Sound.

The boat fell into disuse and essentially became “a pigeon coop” for about a decade, said Kevin Clark, CEO and president of Seattle-based Argosy Cruises.

The boat is the cornerstone of the college’s maritime science program, the place where classroom knowledge is practiced until it becomes second nature.

The boat was treated to a long overdue renovation — literally from top to bottom — and the yearlong job was done just in time for this year’s classes to begin.

The retail merchants committee of the Astoria Chamber of Commerce has endorsed the downtown revampment plan of engineers Cornell, Howland, Hayes & Merryfield.

The committee took the action Friday, and decided to have members appear at the city Planning Commission’s Nov. 4 meeting.

The Planning Commission and the mayor’s downtown plan study committee agreed recently to hold a series of meetings to work out a traffic-flow plan for through-city traffic.

Police and firemen from Seaside, Gearhart, Cannon Beach, Warrenton, Hammond and Astoria battled the blaze till past midnight. The fire was reported at approximately 9 p.m.

Some 15 Clatsop College students, concerned that Clatsop County residents have not been polled on an aluminum plant in the area, organized Monday to work for that goal.

In a petition drive conceived by Kirsti Unila, of Astoria, county residents opposed to the proposed AMAX aluminum-reduction plant in Warrenton would be asked to sign a petition to that effect.

Immediate goal of the signature drive, Unila said, is to collect as many signatures as possible before next Wednesday, when the signed petitions will be presented to the Clatsop County Board of Commissioners at their regular 10 a.m. meeting. They will be requested, according to language on each petition, to “do all in their power to prevent the planned construction of the proposed AMAX aluminum reduction plant.”

On Oct. 9 as most Clatsop County residents slept, a hush-hush police stakeout was in place at two area military installations to guard against a possible bombing of the facilities.

Gov. Tom McCall’s office informed all Oregon law enforcement agencies earlier that one military installation somewhere in the state “might be bombed that Monday night.” The governor’s office had good reason to believe a bombing might happen then.

A Job Corps official told Astorian and Tongue Point Job Corps Center staff Thursday they can be “very proud” of the center.

Tom Modisett, a Job Corps official in management and finance, from Washington, D.C., said that study by his evaluation team this week indicated that Tongue Point had strong points and some that need work. But, he added, with 700 girls from diverse backgrounds and more than 100 staff members, problems are to be expected.

Modisett and 12 other Job Corps officials concluded their weeklong review today and were to deliver a report on their findings this afternoon. It’s an annual review which Job Corps conducts of each of its facilities.

Construction will begin soon on a 42-foot pleasure cruiser, capable of making off-shore cruises to Alaska and Mexico, for Jerry Dimick, of Astoria.

The raised trunk cruiser is being specially designed by Edwin Monk, naval architect of Seattle, for extended cruising and comfort. It will be built by Victor Merilan in his boat shop on Bond and Hume streets where he has turned out two trollers, Destiny and Sorsa.

Dimick and his wife will live aboard the cruiser, which will have complete living quarters provided with the best in-household appliances such as an automatic washing machine, automatic dish washing machine, electric refrigerator and other electrical equipment. Berths for six are included in the plans.

For the first time since the beginning of the war, the Astoria Marine Construction Co. today is repairing a commercial boat under a roof.

Despite the great volume of naval construction and repair, the local shipbuilding firm was able to take care of more than 1,000 commercial boat repair jobs, including overhaul of ferries and the pilot schooner Columbia. These repairs were made in cradles outside the busy naval construction ways, which were occupied with the construction of 39 yard minesweepers.

Lee Sing, the Chinese grocer and produce merchant near Miles Crossing, is tapering off on his war work. Since Pearl Harbor, the busy gardener and storekeeper has put on an extra night shift for himself, repairing clocks and watches. From 10 p.m. until as late as 2 a.m., he restored clocks to duty, and occasionally put watches back into action.

When interviewed Tuesday, Sing was shy about having anything to do with newspapermen. He has a fear that being in a newspaper will increase business. Sing said he wanted no more clock repair business. Sing wants to rest after his long day in the garden and store.

From now on, the storekeeper, at Route 1 Box 33, will repair clocks brought in by his friends and no one else. It takes years of acquaintance, and perhaps more than occasional purchases at the store, to qualify as Sing’s friend.

Although he is an artilleryman himself, having commanded a battery of mortars in World War I, City Manager James O. Convill “passed the buck” to his secretary, Mrs. Margaret Woodson, who now is harnessed to the job of firing the city’s cannon on momentous occasions.

The cannon is one of the group of excellent relics of old Astoria presented to the city by William Glendenning and his wife, of Astoria.

The Franks, Sumner and Moale will tie up at the U.S. Navy station and other ships of the task group will proceed to Portland to discharge passengers and prepare for Navy Day celebrations, the Navy said.

Direct from Okinawa in 12 days, the USS Franks berthed at the Astoria naval station Pier 2 this morning and will remain here for observance of Navy Day on Oct. 27. She carried more than 100 passengers from Okinawa. They were discharged here and left for separation centers by bus.

Aboard the USS Franks, which has seen much action, was one Astorian, George Huhtala, seaman first class, whose wife and young daughter live at 300 Columbia St. He received liberty to see his family shortly after the destroyer, which is of the 2100-to Fletcher class, tied up.