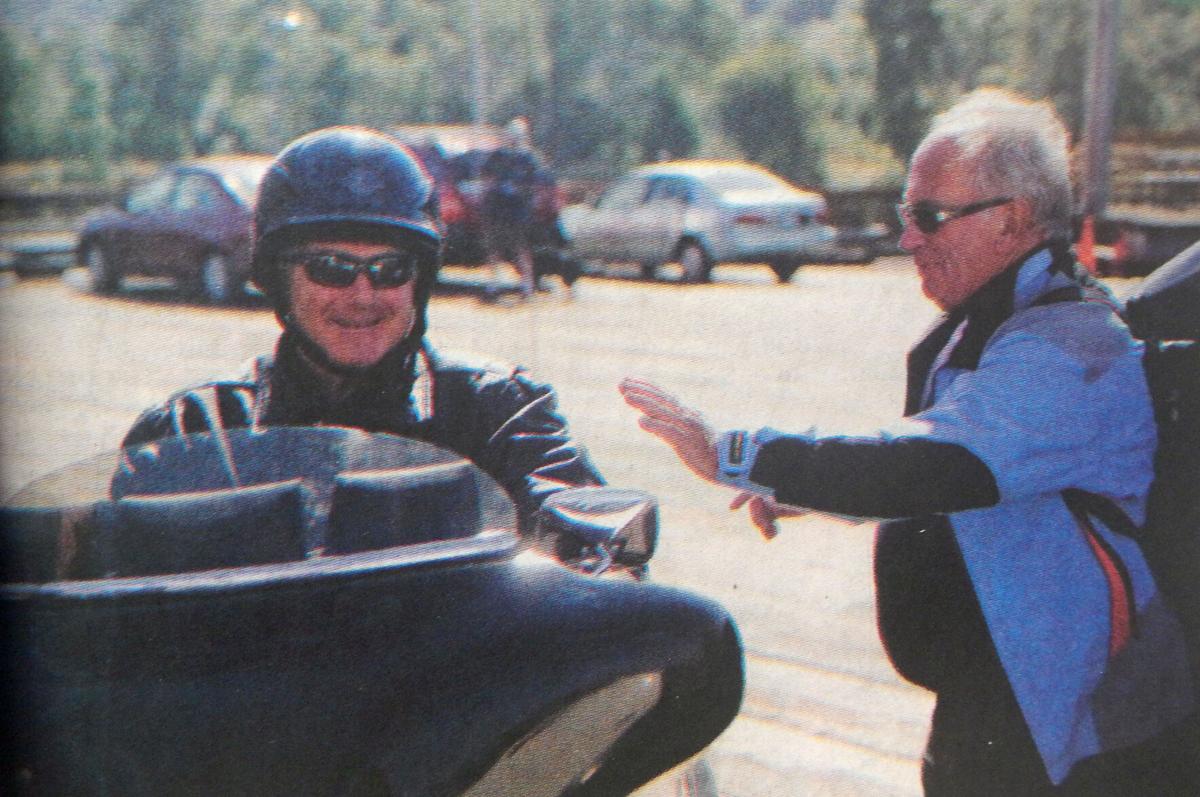 Mayor Willis Van Dusen gets a pat on the shoulder from Heinz Merklinger, the burgermeister of Walldorf, Germany, after quietly riding in from behind and loudly revving the engine on his Harley-Davidson in 2010. 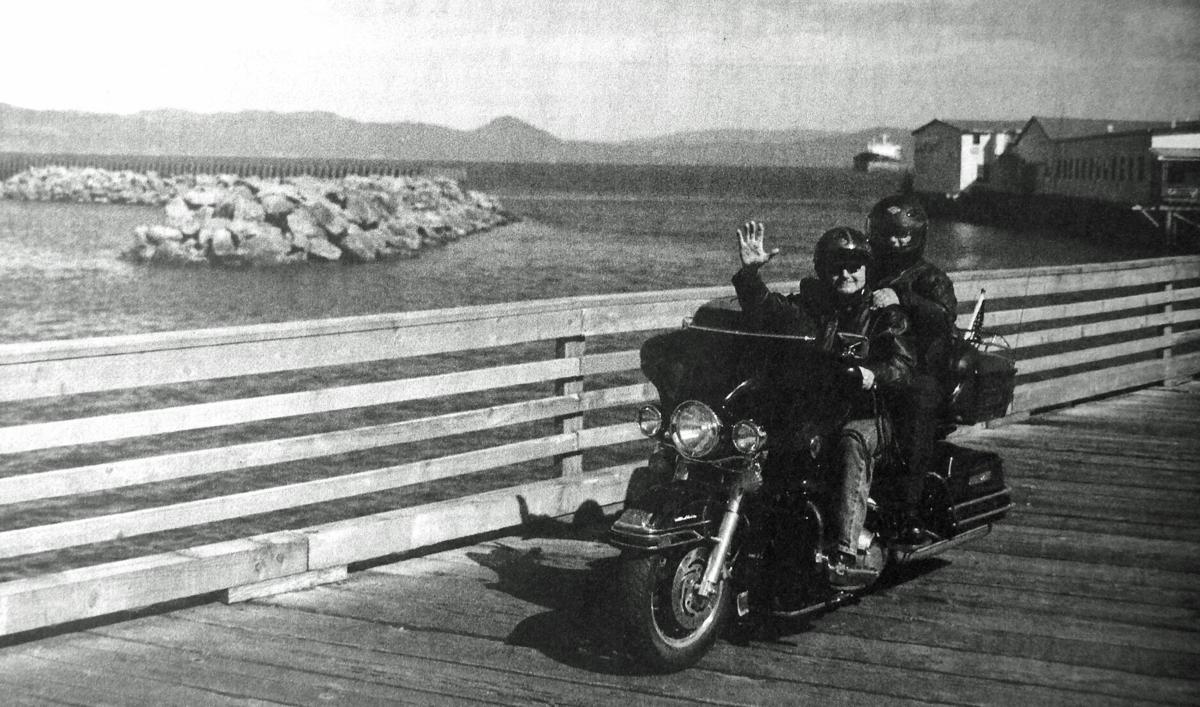 Driving his Harley-Davidson motorcycle, Mayor Willis Van Dusen sets off from Pier 39 with Heinz Merklinger, the burgermeister, of Walldorf, Germany, during a tour of Astoria in 2010. Walldorf is Astoria’s sister city. 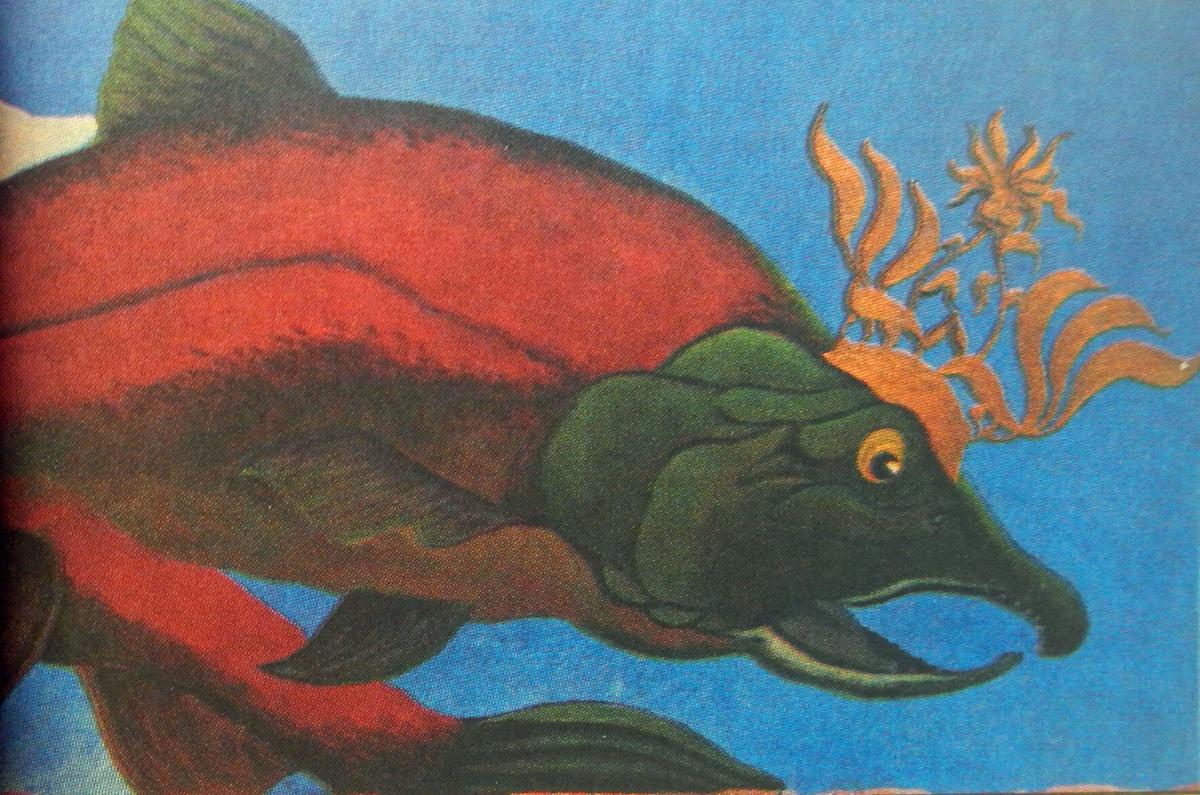 A king salmon walks on the path to the Astoria Library in Dorothy Danielson’s ‘Goin’ to the Library’ mural that was unveiled in 2010. 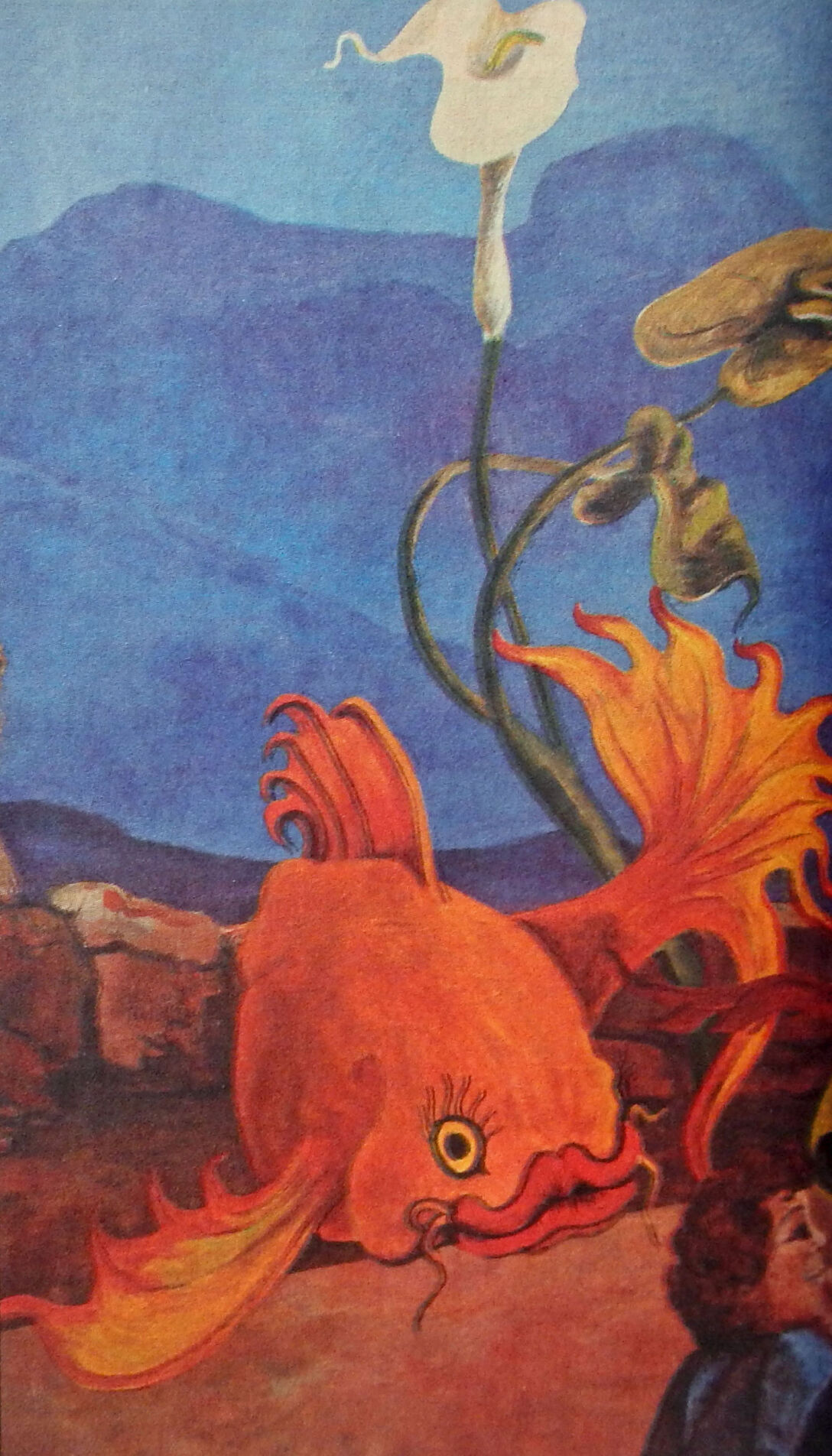 A goldfish in Svensen artist Dorothy Danielson’s mural, ‘Goin’ to the Library’ in 2010. The mural has a sister at the Ilwaco Public Library. 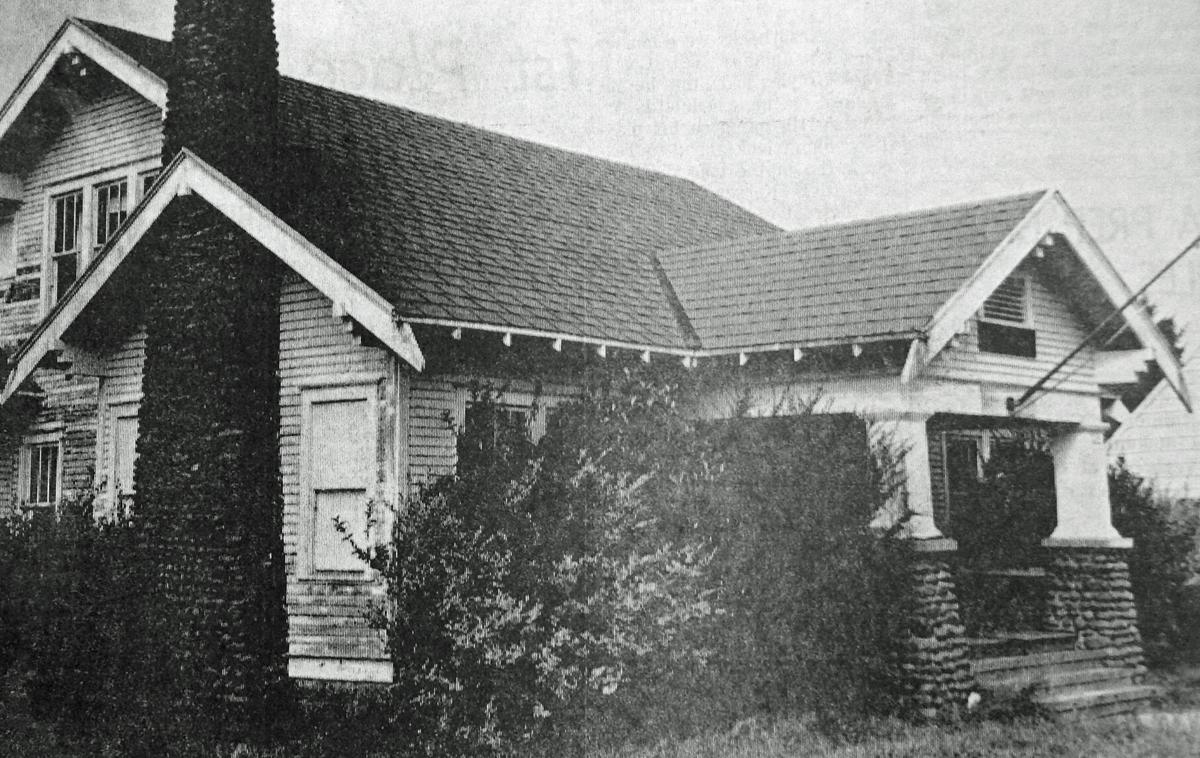 The old Legion Hall in 1970. It housed families and various organizations. 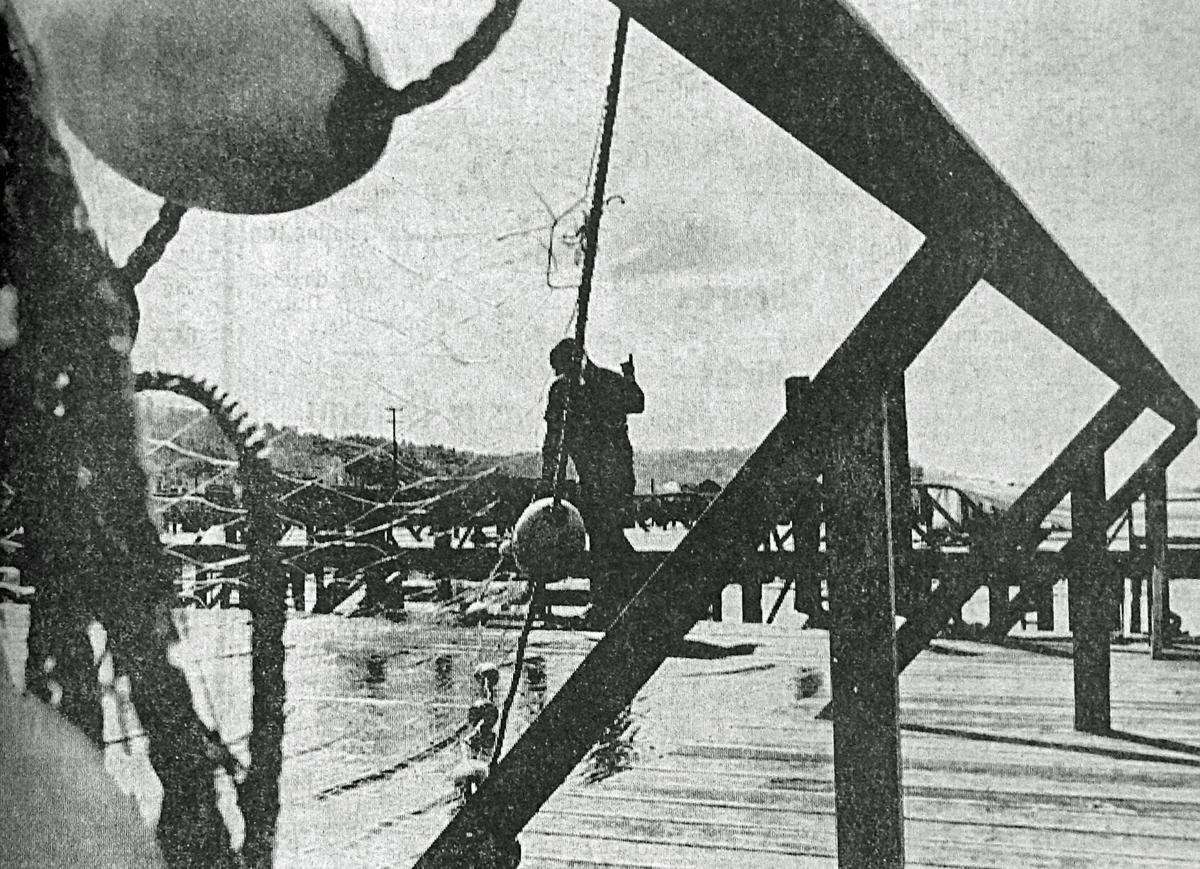 Ron Niemela prepares nets for the fall gillnet season in 1970. 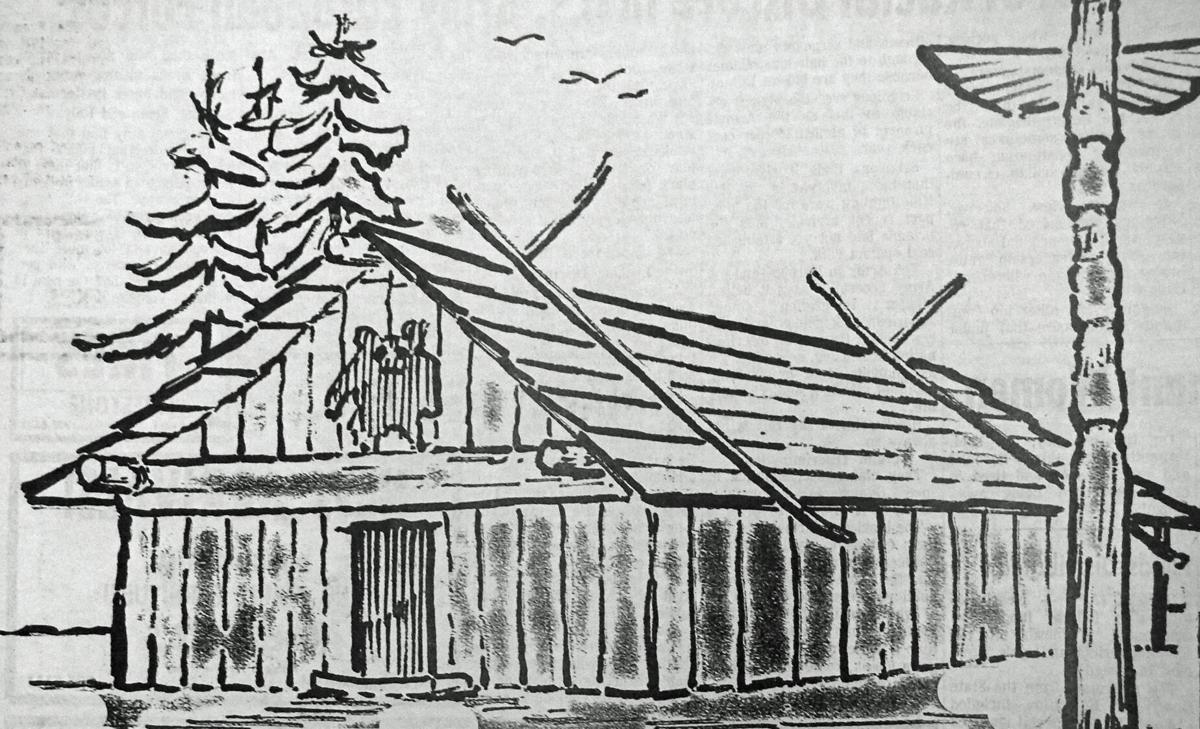 A Chinook Indian longhouse sketch by Eugene Landry in 1970.

Mayor Willis Van Dusen gets a pat on the shoulder from Heinz Merklinger, the burgermeister of Walldorf, Germany, after quietly riding in from behind and loudly revving the engine on his Harley-Davidson in 2010.

Driving his Harley-Davidson motorcycle, Mayor Willis Van Dusen sets off from Pier 39 with Heinz Merklinger, the burgermeister, of Walldorf, Germany, during a tour of Astoria in 2010. Walldorf is Astoria’s sister city.

A king salmon walks on the path to the Astoria Library in Dorothy Danielson’s ‘Goin’ to the Library’ mural that was unveiled in 2010.

A goldfish in Svensen artist Dorothy Danielson’s mural, ‘Goin’ to the Library’ in 2010. The mural has a sister at the Ilwaco Public Library.

The old Legion Hall in 1970. It housed families and various organizations.

Ron Niemela prepares nets for the fall gillnet season in 1970.

A Chinook Indian longhouse sketch by Eugene Landry in 1970.

As Burgermeister Heinz Merklinger strapped on his helmet, zipped up his leather jacket and hopped on the back of Mayor Willis Van Dusen’s motorcycle, the pair seemed carefree and happy to celebrate the sunny day.

But their meeting Friday was more meaningful than one might think.

As mayor of Walldorf, Germany, for the past 12 years, Merklinger was visiting the North Coast to thank Walldorf’s sister city — and Van Dusen was more than happy to oblige.

“I’ve been riding motorcycle for 15 years and when the burgermeister visited Astoria last time, I gave him a quick two-block ride. He came out of the house and just got on the back so we went for a short ride,” Van Dusen said. “And ever since he’s been planning to come back, he’s been saying he wants to ride on my Harley-Davidson. For a while wasn’t sure if he was serious, but his wife told me this is one of the highlights of their trip — so we’re going to have a good time.”

Since his last visit, Merklinger said he is impressed with how much Astoria has developed and continued to grow.

As oil gushed out of the Deepwater Horizon offshore oil well, the group was sent to different spots on the Gulf of Mexico to help clean up the mess, trying on new job descriptions with a 30-day shelf life.

“With the exception of one, our group wasn’t assigned to jobs that we were qualified to perform,” Ensign Katie McCaffry said. She became the deputy planning section chief in the command center of the Forward Operating Base in Lafourche Parish, Louisiana.

Over the past several months, while Steadfast has been at the Coast Guard Yard in Baltimore, Maryland, for a multimillion-dollar overhaul, members of its crew have been scattered throughout the country learning job-related skills and helping in other Coast Guard missions like the Gulf cleanup.

Children will soon be enjoying a colorful mural at the Astoria Library.

On Saturday, the library will unveil a 16-foot mural, painted by Svensen artist Dorothy Danielson, who painted the mural inside the Ilwaco Public Library.

“I’m amazed how it came out,” said Jane Tucker, director of the library. “It takes your breath away.”

ILWACO, Wash. — The re-creation of an early Indian-American tribal center seems the assured outcome of efforts over the past six months by the Chinook Tribal Council, headquartered in Ilwaco.

Focus was directed to the operation “moccasin-strap” by the success of the Chinook Indian Salmon Bake recently held on the north bank of the Columbia River, site of many pre-pioneer Indian salmon bakes.

WARRENTON — The old Legion Hall at the corner of Fourth and Main streets, which has housed families and various organizations since it was built in 1924, will be up for public auction Monday. Now owned by Clatsop County, the building and property will be among other properties auctioned beginning at 10 a.m. Monday.

With final details of the American Metal Climax-Northwest Aluminum Co. deal wrapped up today, word has come that the drawn-out negotiations even involved the White House along the line.

U.S. Rep. Wendell Wyatt told The Daily Astorian Wednesday that he and others had to do somewhat of a selling job to a presidential aide before the way was cleared for the valuable Bonneville Power Administration power contract to be transferred to American Metal.

Wyatt, who said he was “gratified” the deal went through, said a presidential aide had read a Wall Street Journal story a few months ago that said Showa Denko, a Japanese firm, had given Northwest Aluminum a letter of intent concerning Showa taking over most of the Northwest Aluminum investment. Wyatt said the aide didn’t like the idea of a Japanese firm using electricity from a U.S. federal agency to reduce aluminum, ship ingots to Japan for manufacturing and end up selling the finished products in America.

The congressman said he and others the past few days had a difficult time getting through to presidential assistant John Ehrlichman to convince him that the Warrenton deal should go through. They finally did, though.

Approval of Clatsop Community College’s maritime sciences program was given overwhelming approval by an advisory committee of area people of marine occupations.

The committee and others recommended the college to go ahead with the commercial fishing program and modified recommendations for the program, particularly stressing the need of basic fundamentals needed for working with fishing vessels.

In their recommendations, which came at a recent meeting in the college library, the committee said students should be able to select and purchase food as well as prepare it aboard a moving vessel. They should have a knowledge of nets, fishing, icing, refrigeration, how to operate a Loran (a position determining device), and be well acquainted with the mechanics of both diesel and gas engines, the committee said.

A summary of the broadest and the toughest all-community homefront job of the war, local rationing and price control, was released today by D.J. Lewis, coordinator of civilian defense and secretary of the ration-price office here from date of its beginning.

The overall picture presents staggering figures attesting to long hours of volunteer labor by Astoria civilians — both men and women.

Together these people doled out 25.8 million gallons of fuel oil; 980,714 pounds of canning sugar; almost 8,000 new tires for trucks and passenger cars; more than 12 million gallons of gasoline and quantities of stamps for shoes and rubber boots. Others struggled with the task of guarding price ceilings, of controlling issuance of red stamps for hard-pressed restaurants, butcher shops and other users including the vast fishing fleet.

The fuel oil program and its operation was almost the sole responsibility of Mrs. Booth. This Astoria woman supervised the maintenance and servicing of more than 4,000 individual accounts which drew almost 26 million gallons of fuel oil since the start of the rationing program.

Not only has the U.S. Navy rescinded the order which would have decommissioned the Tongue Point Naval Air Station on Oct. 1 but it is preparing to expend another $12 million there in connection with the use of part of the space on the reservation for the mooring of ships, according to telegram received by the Astorian-Budget this morning from U.S. Rep. James W. Mott.

Mott wired: “Adm. Good of naval operations advised me today he is submitting to the secretary of navy a request for authorization of expenditure of $12 million dollars at Tongue Point for additional facilities for mooring and maintaining between 300 and 400 naval vessels and that this is not contingent on a future decision of Tongue Point as a naval air station.”

Gillnetters were reported to be eagerly eyeing the muddy Columbia River, marking time for the noon opening of the fall commercial season, while offshore fishermen report some silverside but no tuna takes.

River gillnetting will commence at noon today and most canneries express optimism, speculating on the first two or three days of the fall season. One canneryman expressed the belief that the season will follow the pattern of the 1941 season, when the fish appeared for three weeks after the opening date.

Pacific Northwest tenants must be given six month’s notice before being evicted from a home, even though it may have been sold and the owner is ready to occupy it.

Irvin A. Hoff, district director of the Office of Price Administration, announced the ruling which he said was taken to protect tenants in areas where they cannot find rental housing in their own price range during the reconversion period.