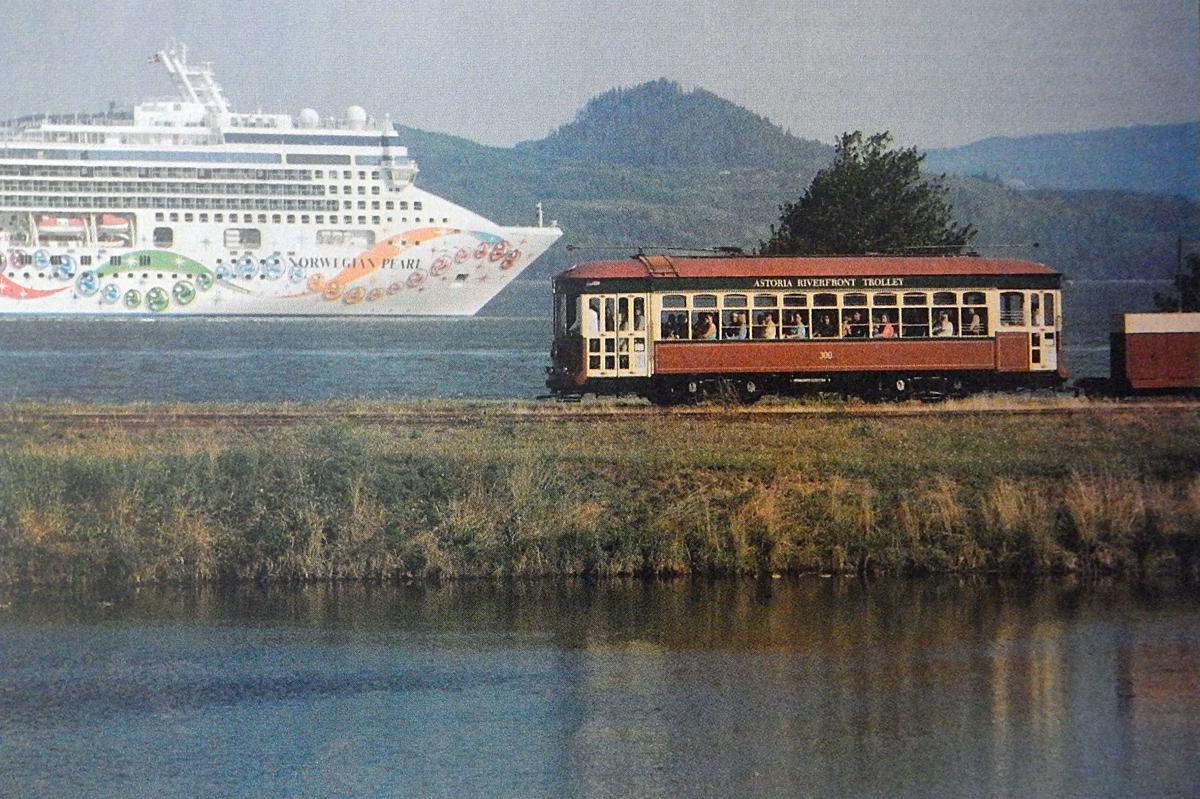 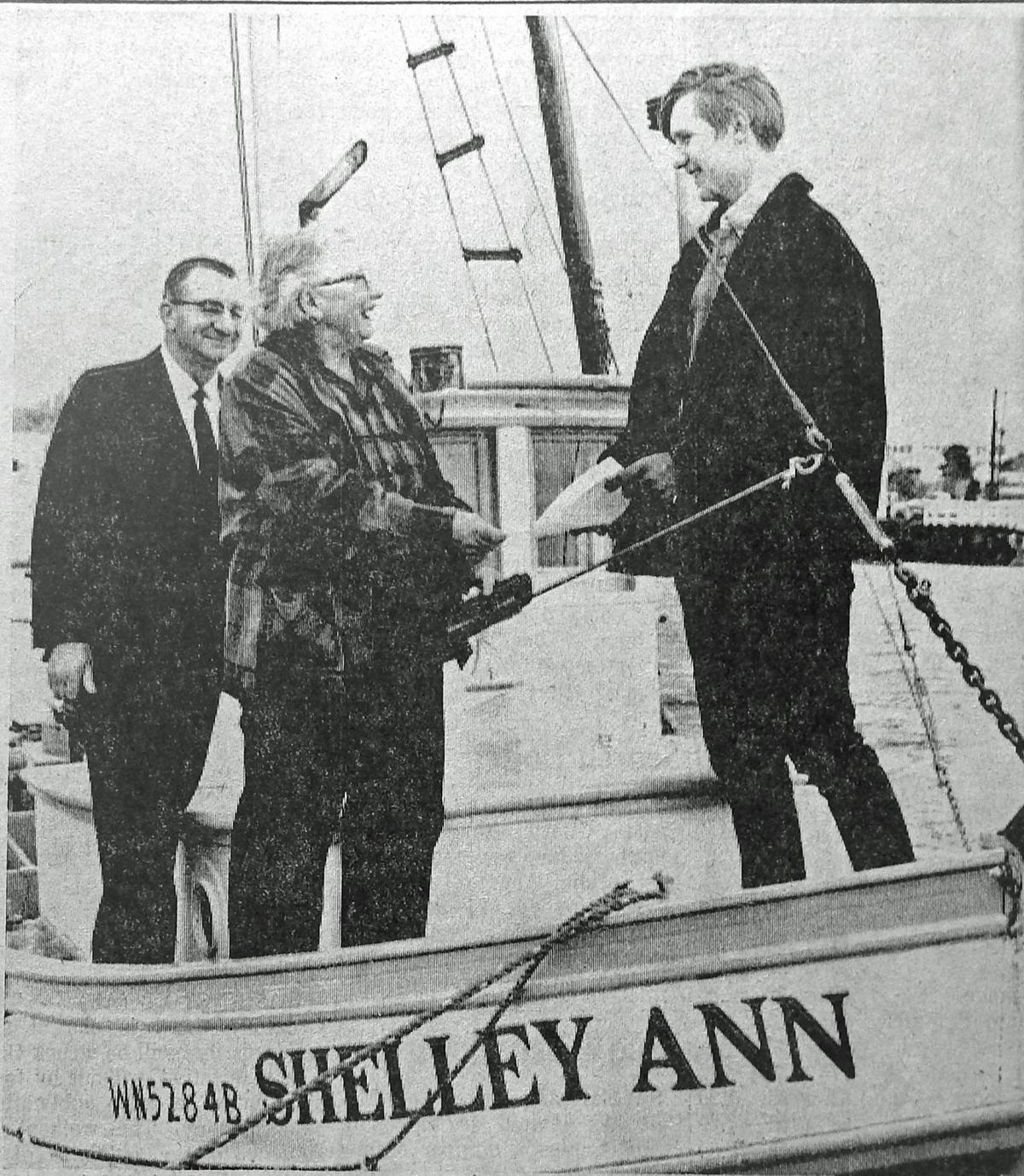 1969 — The Shelley Ann is now officially owned by the Ocean Beach School District as a result of the generous donation of the vessel, completely equipped, to the district by Mrs. Roland Mitchell this morning. Mrs. Mitchell, whose husband died suddenly of a heart attack during the recent commercial fishing season, is shown turning over the deed of the 30-foot trawler to Bert Berman, student body president of the Ilwaco High School. 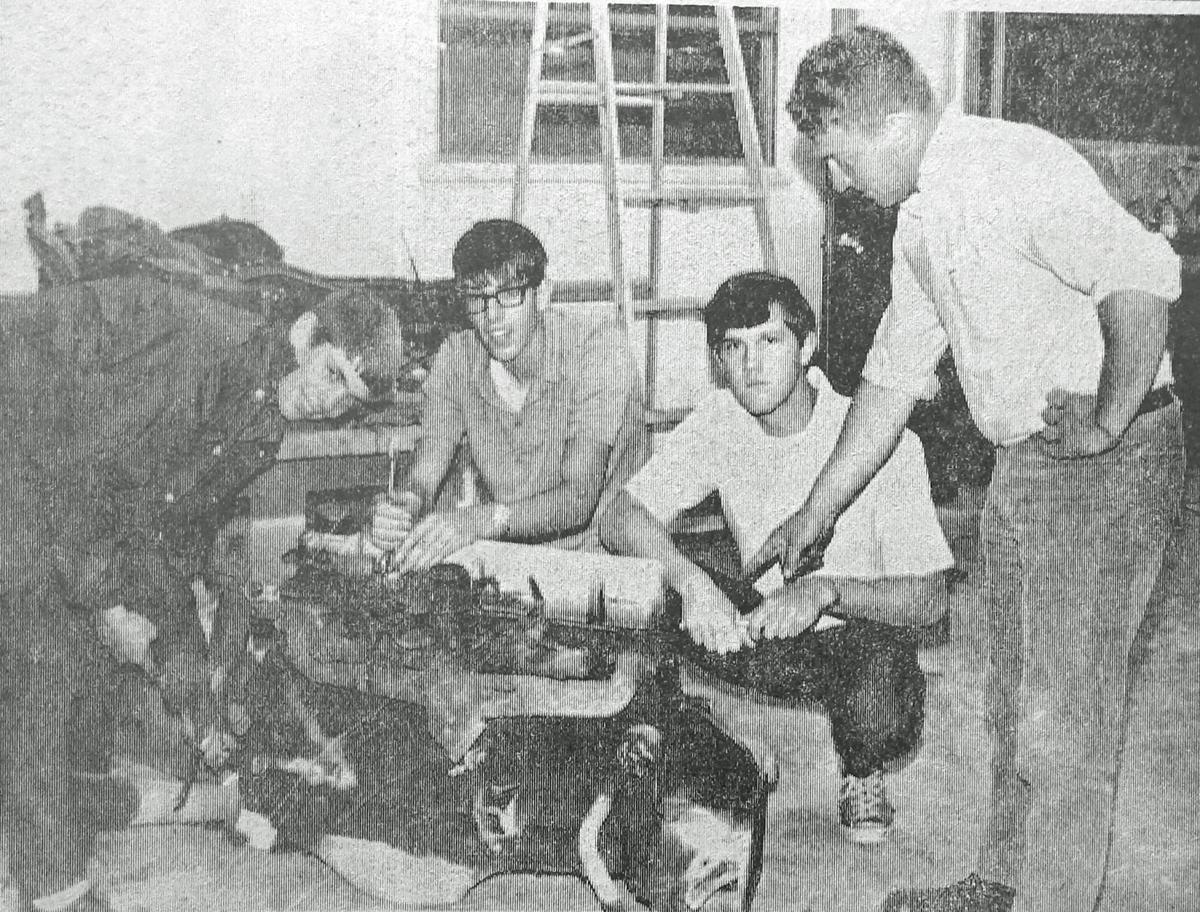 1969 — Students and teacher gather around a marine engine as part of the unique classes in Sea Resources and marine engine and hull repair being taught by Ocean Beach High School. They are, from left, Mike Prest, Doug Tetz, Fred Litscke and Henry Niemi, the teacher. 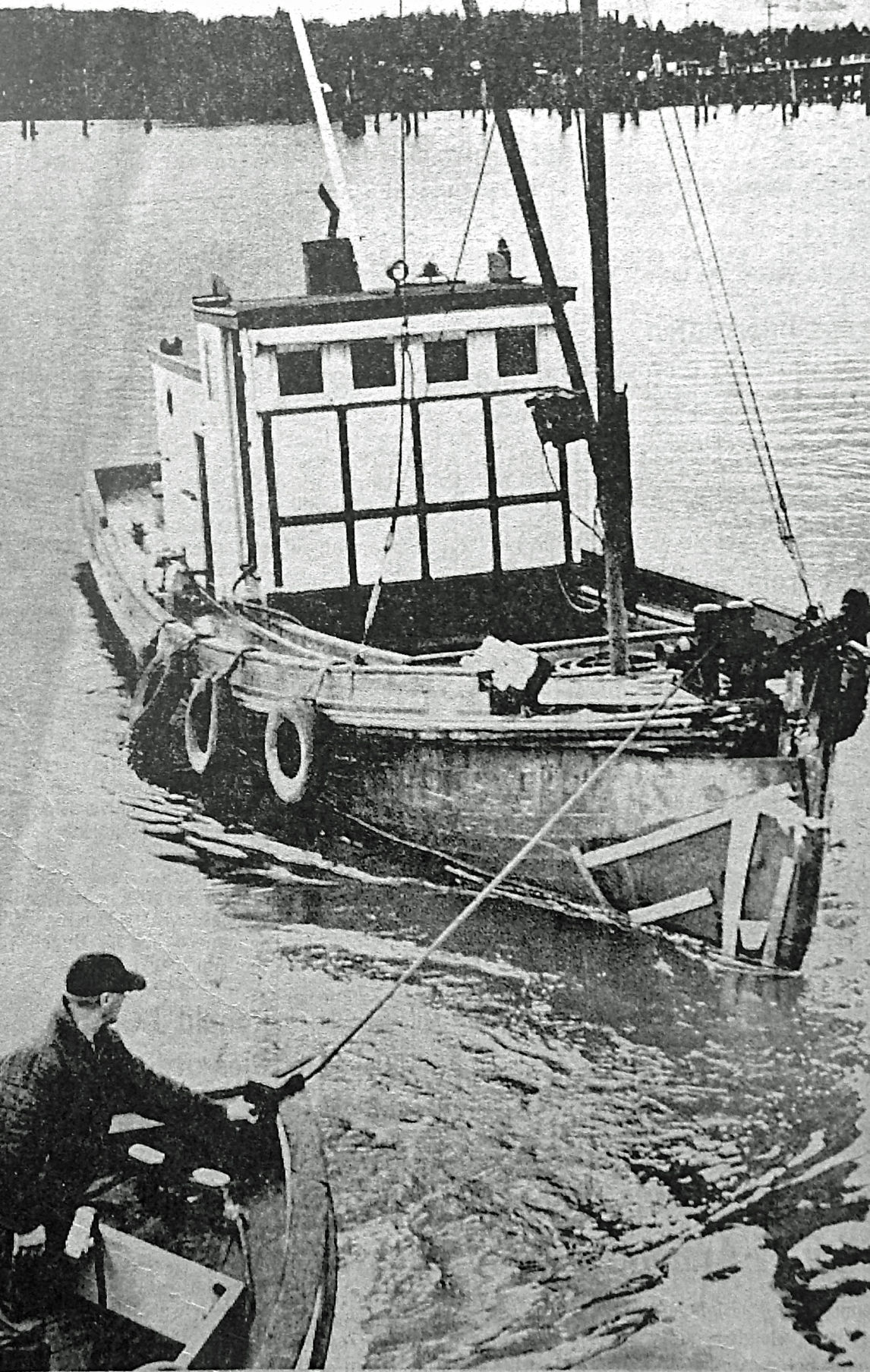 1969 — Students and teacher gather around a marine engine as part of the unique classes in Sea Resources and marine engine and hull repair being taught by Ocean Beach High School. They are, from left, Mike Prest, Doug Tetz, Fred Litscke and Henry Niemi, the teacher.

On board the Norwegian Star, 2,200 passengers can lounge in a lavish atrium, dine in upscale restaurants, take their chances on the onboard casino, relax in the spa and see a show in an ornate theater.

All the byproducts of the luxurious weeklong cruise from Vancouver, British Columbia, to Los Angeles have to be contained, too. International law governs how the cruise ship disposes of its wastewater and garbage, Fiebrandt said.

Shoot a raw oyster and stack some crab pots. Knot a perfect “eye splice,” and mend a net. Chug a root beer. Kiss a barmaid, and be slapped in turn.

Just your average day as a fisherman in these parts.

The atmosphere at this weekend’s Pacific Commercial Fishermen’s Festival was that of a good day at sea. Warm September sunshine found its way around cottony clouds, as families, fishermen and friends reveled in all the lore and lunacy of the fishing lifestyle.

The relocation from last year’s downtown site to Port of Astoria’s Pier I was a wise move.

WARRENTON — Facing the threat of cloudy skies and rain on much of the coast, more than 3,700 volunteers turned out to participate in the 25th anniversary of the SOLVE Great Oregon Fall Beach Cleanup this weekend.

The entire Oregon Coast, over 362 miles long, was cleaned of debris that had accumulated since last spring. Volunteers removed an estimated 54,460 pounds of trash from Oregon’s beaches.

A pool of red flowed back-and-forth across the intersection of Commercial and Ninth streets in downtown Astoria Wednesday afternoon.

About 80 protesters in red T-shirts with anti-liquefied natural gas (LNG) slogans printed across them chanted their slogans and encouraged passers-by to honk if they opposed LNG.

“We’ve been fighting this for five years,” said Olivia Schmidt, a Portland-based leader for Columbia Riverkeeper.

The rally was being held in anticipation of a Clatsop County Board of Commissioners meeting later that evening in the Judge Guy Boyington Building. The board was scheduled to hold a quasi-judicial hearing on a zone change for Sam Karamonos.

Karamanos owns 121 acres where he asked for the zone change from open space, parks and recreation (OPR) to lake and wetland while reducing the residential zone on the tract. Changing the zoning would remove a barrier blocking the development of the Bradwood Landing LNG project pipeline.

Small-craft warnings will be displayed, according to the Coast Guard, when winds reach a sustained velocity of 25 knots or swells are 10 feet or more in height.

Swells of lesser height breaking in the channel or elsewhere and considered by the officer in charge of the station to be hazardous to small craft may also result in the warning display.

Small-craft warnings based on local conditions will be broadcast on the Coast Guard marine band frequency.

Could a group of high school students learn oceanography, marine biology, celestial navigation, seamanship, boat and engine repair, and a host of other marine related skills within the confines of a high school vocational educational program? Realistically, is all of this possible?

Administrators of the Ocean Beach and Naselle-Gray’s River school districts and a local group of citizens known corporately as Sea Resources are convinced that it is and have designed one of the most unique educational experiments in the nation.

Unlike high school industrial arts programs which give the student brief exposure to different skills but teach him none of them well enough to qualify for a salaried job, the Ocean Beach-Naselle-Grays River program has set out to do a thorough job of preparing students for entry into marine industries. An outstanding feature of the program is that it serves the individual student, the local community, the Pacific Northwest fishing industry and the conservation of Columbia River salmon all exceedingly well.

The Tongue Point cut-off road was officially opened to traffic on Saturday, The Erickson Construction company of Spokane having completed its contract after three summers of work. The contract for eliminating the long curve which took the highway through the naval reservation was let in 1942. The job proved a difficult one owing to the big cuts and fills and many slides which made it hard to stabilize the road. Winter rains twice forced suspension of work.

The two other highway contracts in this county, the airport detour road and the new road to the naval hospital, are now proceeding rapidly, but it will be a race between the contractors and the winter rains.

A visitor in Astoria last week was Carl I. Wick, Seattle, who was gathering information for a booklet on tuna fishing. He was a passenger on the tuna boat Ina, owned by J.H. Niemi.

Wick has already published a book entitled “Salmon Trolling for Commercial and Sports Fishing,” and plans to add other booklets on all types of fishing done along the Pacific coast. From Oregon he moves south to California, where he will tackle the sardine industry and others. He spent some time this summer at Bristol Bay in Alaska.

Death came suddenly Thursday afternoon at Naselle to Anton Henry Brix, 67, pioneer logging operator in the lower Columbia area. Mr. Brix was in his car and apparently felt the heart attack coming on and was able to stop his car before he died.

A native of Sleisvig-Holstein, Germany, having been born there June 7, 1877, Mr. Brix came directly to Grays River, Washington, at the age of 4 years with his parents, Mr. and Mrs. Peter Frederic Brix, who took up a homestead there. He grew to manhood in Grays River and started logging on his father’s farms as a young man.

He logged with his brothers until 1905, when he left the industry to enter College of Puget Sound, Tacoma, retaining his interest in the business. After completing his schooling he entered the lumber business in King County, Washington, and in 1934 he moved to Knappton and again went into the logging business.

J.F. Kilkenny of Pendleton, opening the 10th annual convention of the Oregon Bar Association here Thursday afternoon, appealed to lawyers of the state to combat the wave of intolerance and prejudice that “threatens to divide the nation.”

Kilkenny warned that the U.S. would enjoy no lasting peace if again faced with civil war, and asserted that “it would be a crime if lawyers should write themselves off as a factor of efficiency and power to preserve American institutions.”

Kilkenny said that the future of America demanded more than a lasting peace with other nations, and emphasized the need for a “lasting peace” within the United States.