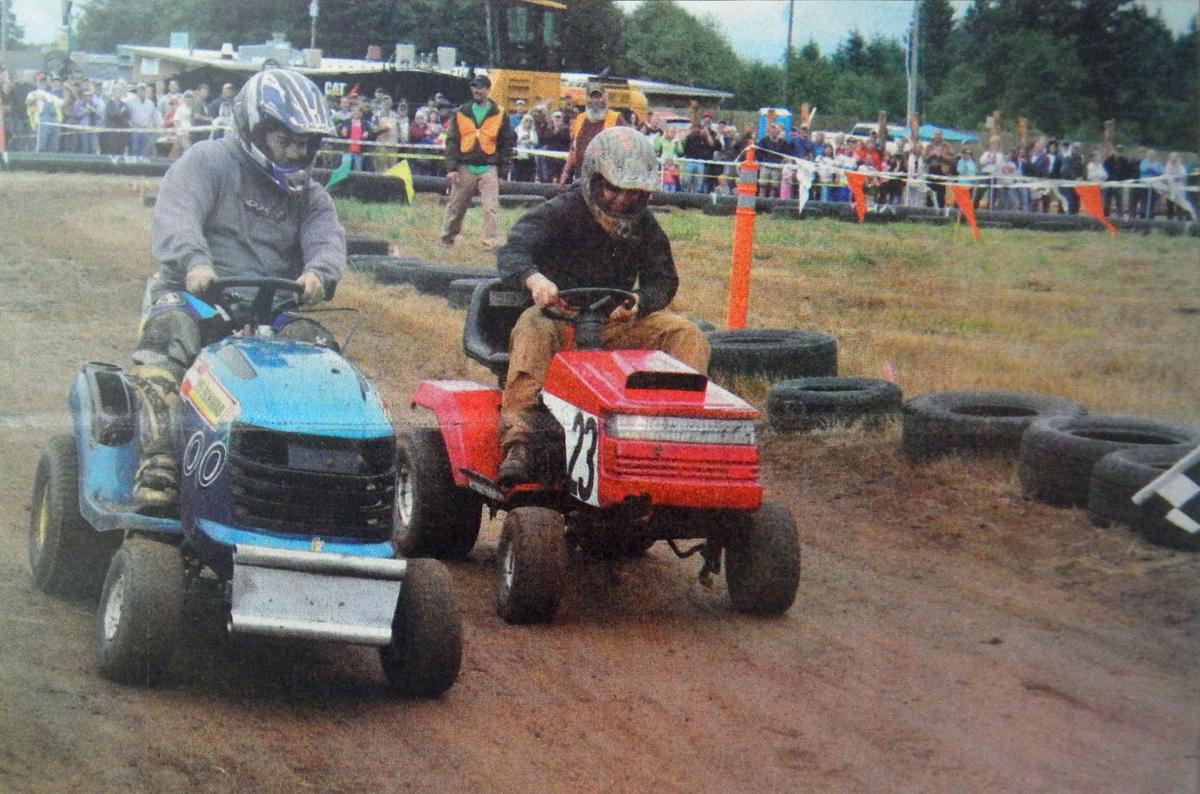 2009 — It's a close finish between No. 00 Matt Kuhnly and No. 23 Nick Landwehr with Kuhnly taking first place during the Knappa Days lawnmower races Saturday. 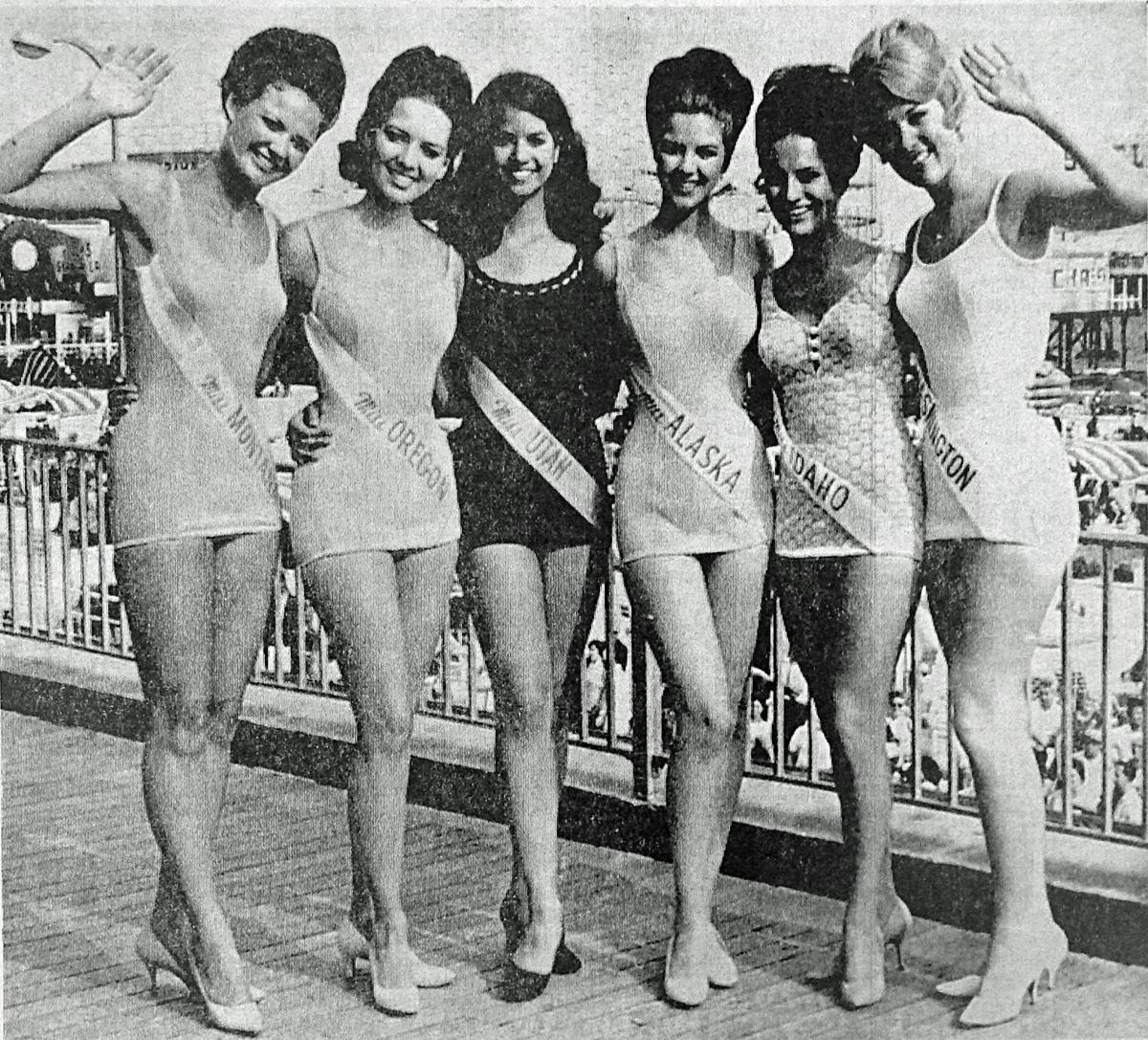 1969 — Smiling as they pose in swimsuits above Atlantic City's Boardwalk are these six hopefuls in this week's Miss America Pageant competition, including Miss Oregon (second from the left), Margaret Elaine Huhta, of Svensen. 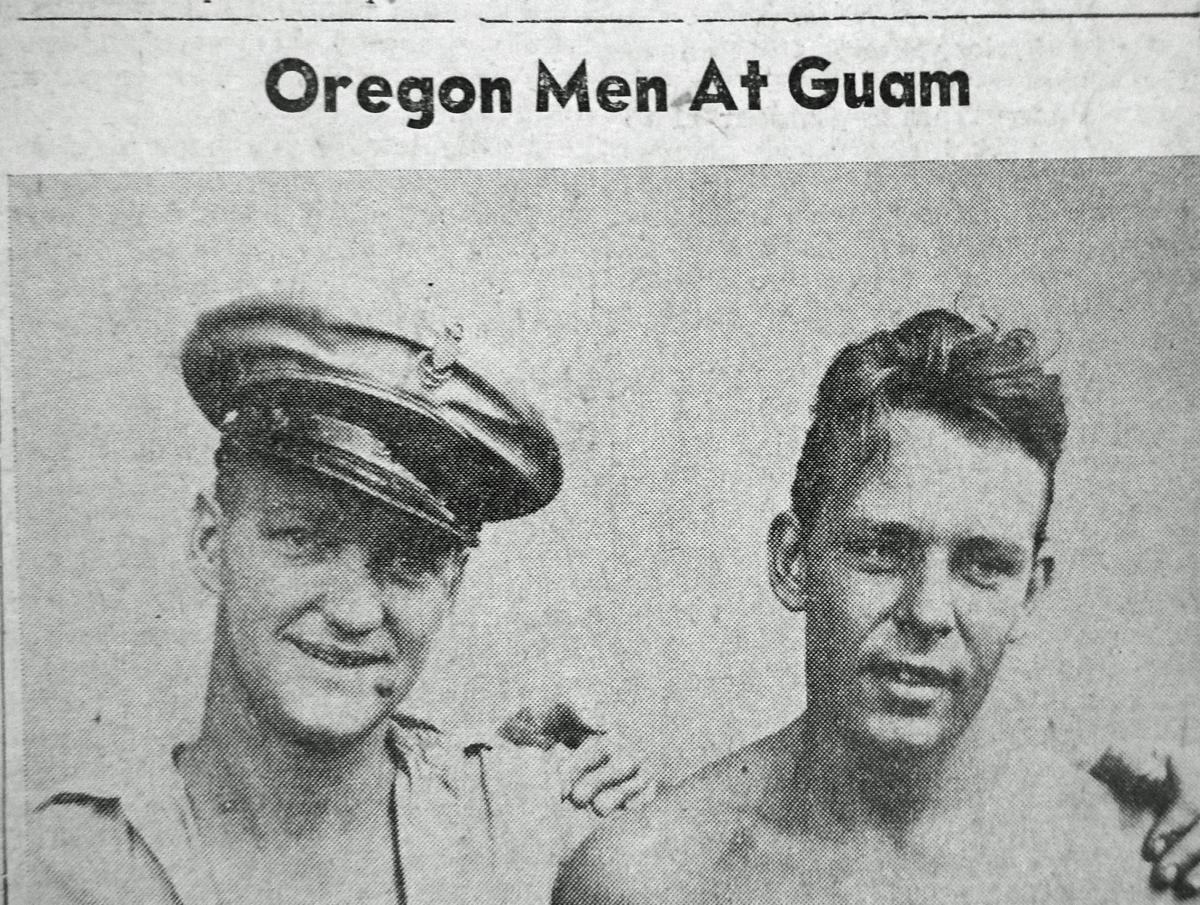 1944 — William B. Pohl Jr., coxswain, of Astoria, and Stanely F. Coelsch, chief motor machinist's mate, of Moro, are seen above as they took part in Coast Guard landing operations in the Guam assault. Coelsch worked one summer at Warrenton and became acquainted with Pohl at that time. 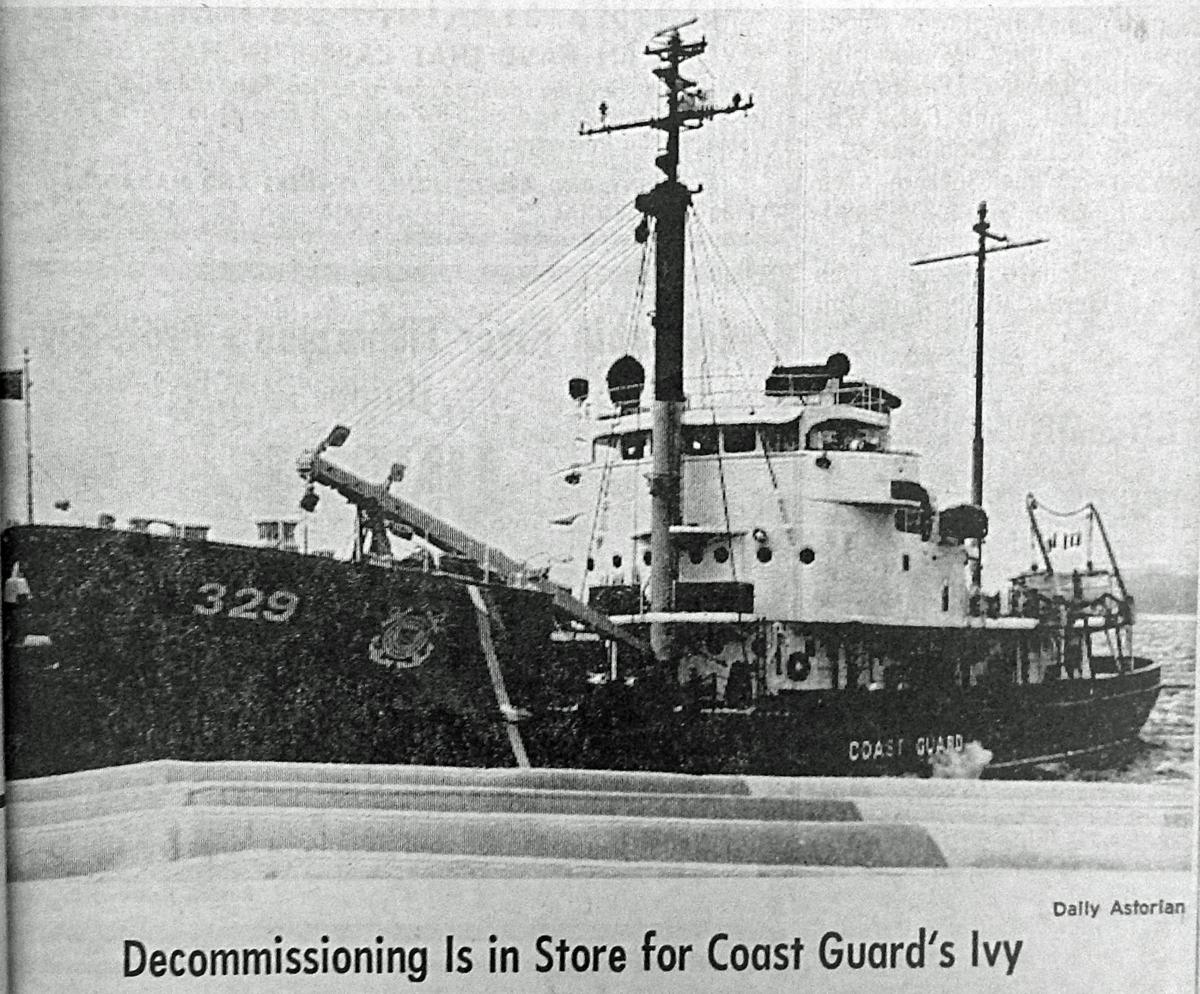 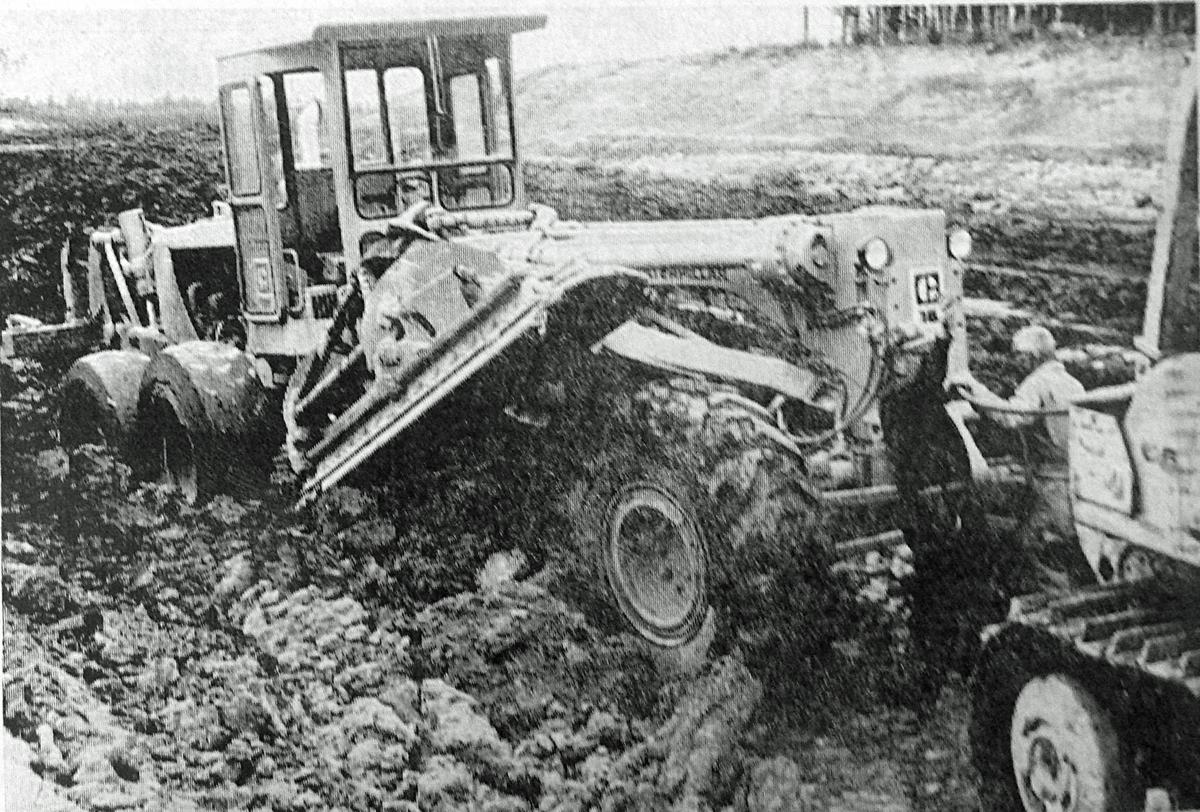 1969 — Frequent sight during grading operations at Northwest Aluminum Co.'s Warrenton plant site is a tractor towing a grader out of deep clay ruts where it was mired. 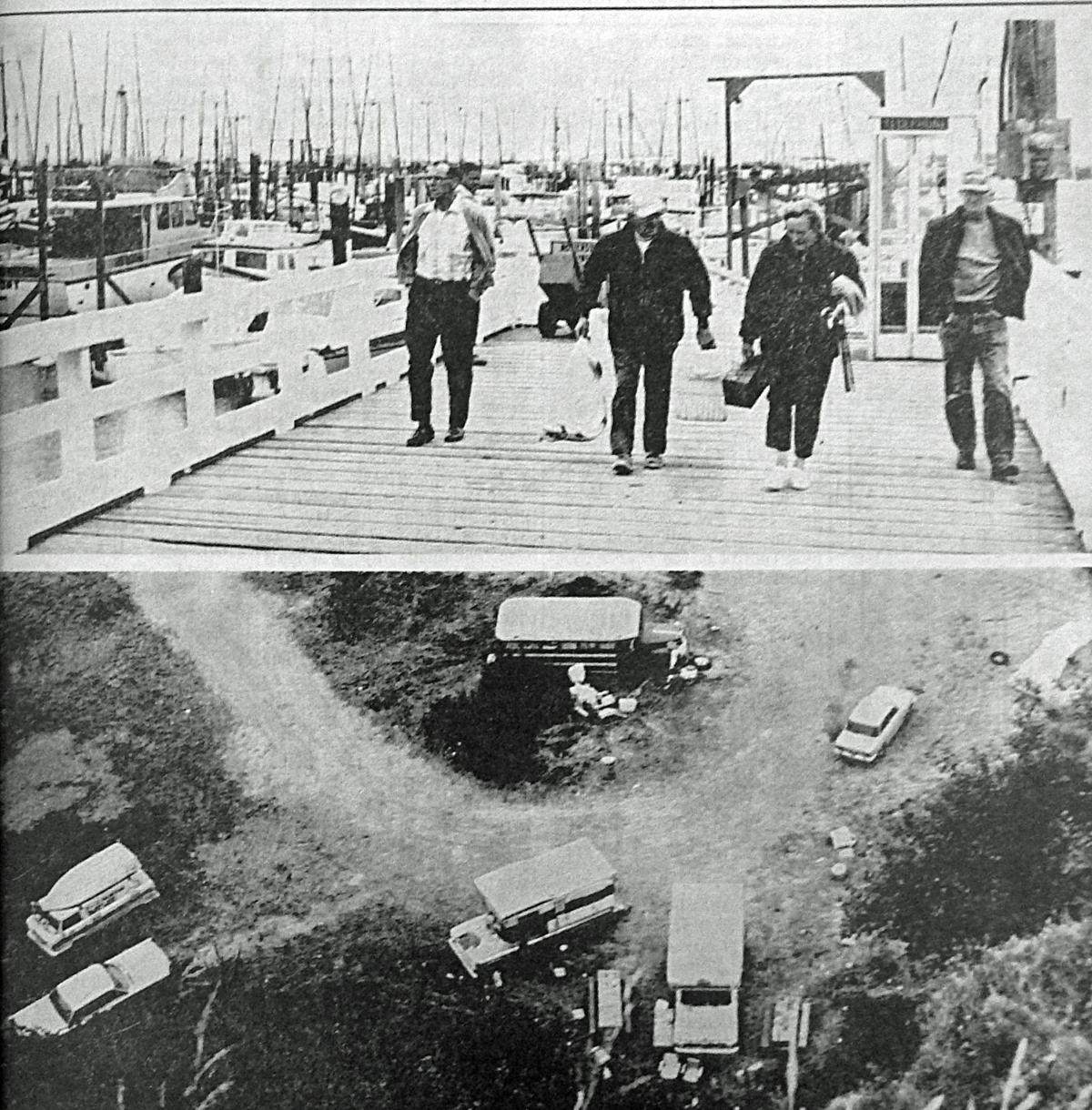 1969 — Despite a heavy bank of fog along the Washington and Oregon coasts on Labor Day Monday, recreational areas were still crowded with people as their last outing before the start of school. 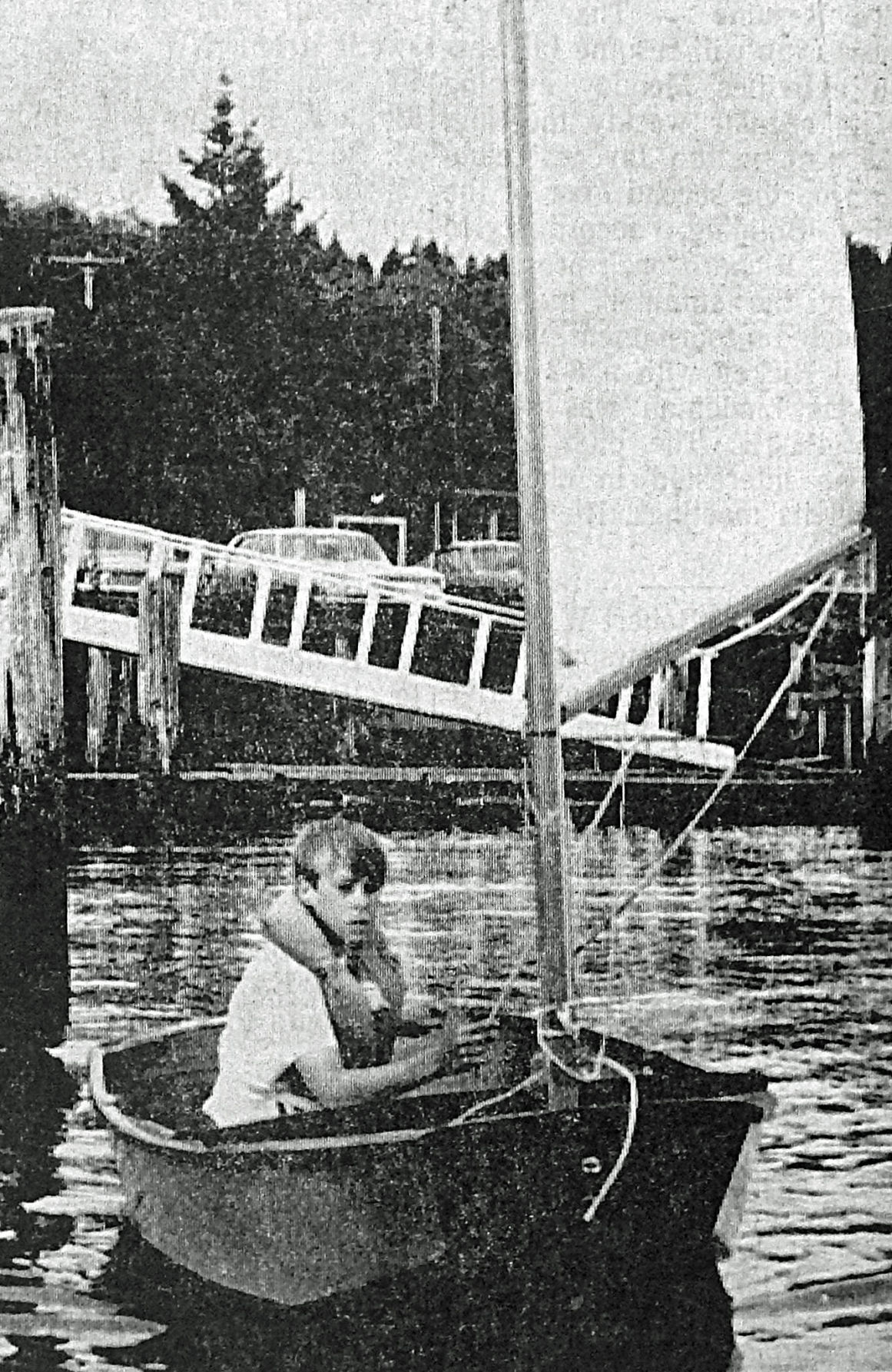 1969 — Forty to 50 of these 8-foot El Toro class catboats will race on Youngs Bay Saturday and Sunday, starting at noon each day, in a regatta sponsored by Astoria Yacht Club. Boats will be entered from Seattle, Renton, Olympia, Astoria and Seaside. Young Tim O’Bryant is sailing his father Obie’s boat in this photo.

2009 — It's a close finish between No. 00 Matt Kuhnly and No. 23 Nick Landwehr with Kuhnly taking first place during the Knappa Days lawnmower races Saturday.

1969 — Frequent sight during grading operations at Northwest Aluminum Co.'s Warrenton plant site is a tractor towing a grader out of deep clay ruts where it was mired.

1969 — Despite a heavy bank of fog along the Washington and Oregon coasts on Labor Day Monday, recreational areas were still crowded with people as their last outing before the start of school.

1969 — Forty to 50 of these 8-foot El Toro class catboats will race on Youngs Bay Saturday and Sunday, starting at noon each day, in a regatta sponsored by Astoria Yacht Club. Boats will be entered from Seattle, Renton, Olympia, Astoria and Seaside. Young Tim O’Bryant is sailing his father Obie’s boat in this photo.

KNAPPA — The parade had just ended, the lawn mower races hadn’t even started, and people were already discussing what they were going to do for next year’s Knappa Days.

“There’s gonna be even more people next year,” predicted John Moore, of Knappa. Moore was a part of the original Knappa Days that last took place over 20 years ago.

There were already more people present in Knappa on Saturday than anyone had expected.

“Well, I am tickled,” Moore chuckled, looking around at the huge crowd, easily more than 200 people, that assembled to watch the lawn mower race.

Time to trot out the bicycles and relive all those favorite lines and scenes from “The Goonies.”

That’s because, as much as they might want to, Goonies never get to say die.

A production crew from Starz Network was in Astoria Friday to add another piece to the Goonies altar. They filmed Oregon Coast locations that star in the movie.

“We’re taking a look at the locations as they are today,” said producer Amark Eddy.

The crew stopped in Cannon Beach and worked their way up to Astoria to take a look at the Goonies House, the old County Jail, the Flavel House and the Astoria Column.

GEARHART — A controversial proposal to annex the Palisades and Highlands areas north of Gearhart drew a crowd to the City Council chambers Wednesday night, but the council delayed a decision until October.

All but one of the 11 people who testified objected to the annexation of the Highlands area. They asked why the council would allow a gated community to become part of the city. They also questioned why the annexation should occur when the city would clear only $56,678 in new property taxes for the general fund, not enough to pay for a police officer to patrol the area.

On its surface, Tweedle Road near Jewell seemed like a perfectly good county road. It was smooth and well maintained.

Improvements would eventually be necessary on the road, not immediately, but Aug. 27, with the blessings of the county, contractors dug it up.

The Upper Nehalem Watershed Council, a group of major stakeholders that identifies projects through a process of watershed health assessment, said the creeks’ culverts under the road blocked salmon passage.

Today the beauty from Svensen rides in the Miss America parade on the Boardwalk. Still somewhat breathless after a whirlwind series of television interviews and picture-taking sessions, Miss Oregon bounded into registration headquarters Monday.

“I tried to get some sleep twice Sunday afternoon,” she said, “but each time I tried the pageant control center phoned and said I was needed for interviews.”

Miss Oregon was welcomed to the Miss America sorority of contestants by the blonde Illinois girl she hopes to succeed, Judi Anne Ford, at a reception for the 50 beautiful hopefuls.

The Coast Guard buoy tender Ivy will be decommissioned and the buoy tender Magnolia assigned to San Francisco when the diesel-powered Tupelo and Cactus arrive at the Tongue Point Coast Guard base late in the fall.

The Coast Guard said decision on future of the two vessels now based at Astoria was made following a study of their usefulness.

Apparently substantial numbers of the sport anglers who cross the Columbia River Bar do not wear their life belts. These safety devices have been lacking in several cases this summer where Coast Guard boats or aircraft were called upon to make rescues.

One life could have been saved in the weekend tragedy off Peacock Spit that took three lives, had life belts been worn. One man fell from the capsized fishing vessel and was lost, presumably drowned. A life belt might have saved his life.

The issue of a U.S. Highway 30 route at Astoria – early improvement of Marine Drive vs. a bypass east of the city – sparked heated discussion Wednesday night between members of the Astoria Planning Commission and between Commissioner Harry Swanson and Mary Steinbock.

Commissioners finally acknowledged that agreement might be possible on a resolution recommending continued improvement of the present route while working toward a bypass plan.

Dr. A.L. Strand, president of Oregon State College, Thursday told the Astoria Kiwanis Club that the Northwest will need some of the “best young brains” in the country to meet the industrial challenge of the immediate future, and that the state college is preparing for a big influx in enrollment and a broadened program of industrial research to meet the needs of the state.

A small Navy tug, working with another tug to warp one of the APA troop transports into the Astoria naval station docks last night, sank in the Columbia River when a line parted allowing the tug to slide aft within range of the big transport’s churning propeller.

Failure to yield right of way at intersections and improper parking maneuvers were factors in the high accident record in the city of Astoria during the first six months of 1944, Chief of Police John Acton reported today.

Chief Acton based his report on an analysis of the high accident streets in the city, prepared by the safety division of the secretary of state’s office.

August, the month of strange weather quirks in the coast country, held to precedent this year as a final day of heat (92 degrees) on the 30th climaxed weeks of cloudy and partly cloudy weather.

There were only five clear days, 14 partly cloudy and 12 cloudy, according to the Astor experiment station’s weather report.

SUPREME HEADQUARTERS, AEF — Five American armored columns moved on the borders of Germany, Belgium and Luxembourg along a front of more than 100 miles today and Nazi spokesmen warned their people that allied invasion forces might break into the fatherland at any hour.