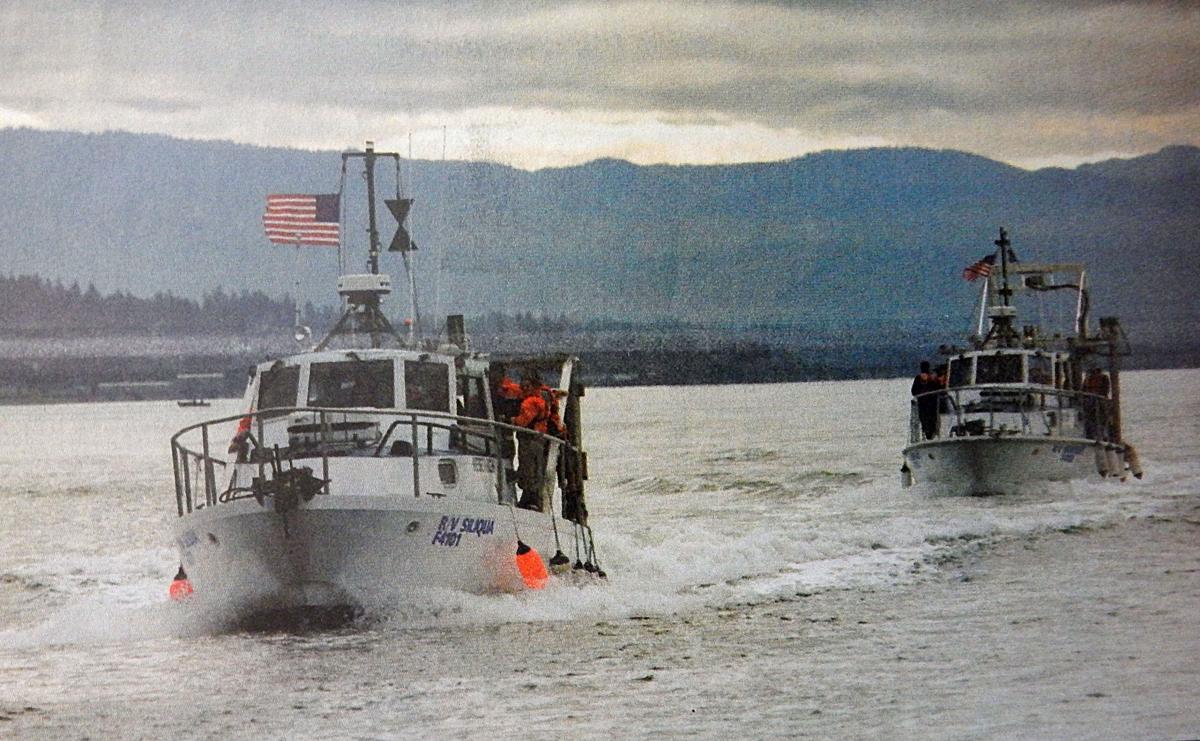 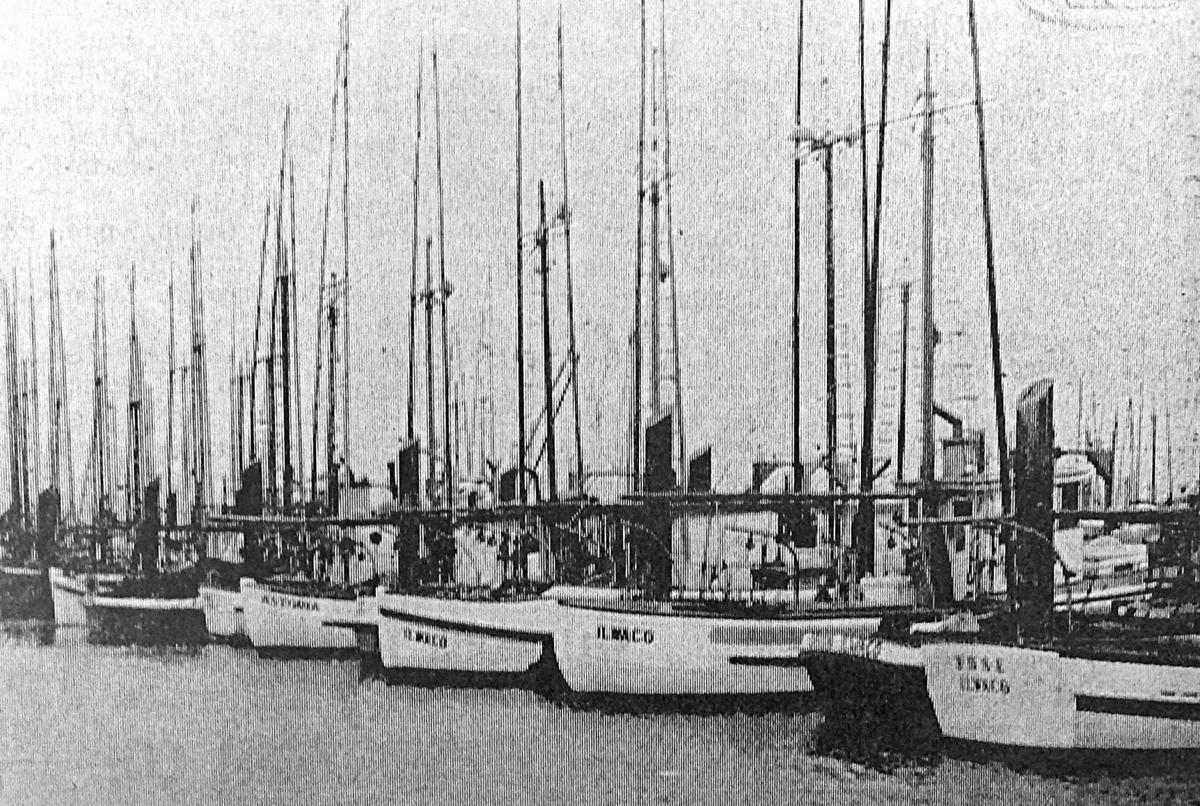 1969 – Full moorages at the Port of Ilwaco’s boat harbor is one of the contributing factors to the port commissioners’ action Monday afternoon hiring an engineering firm to prepare a new comprehensive plan which will carry them up to 1985. 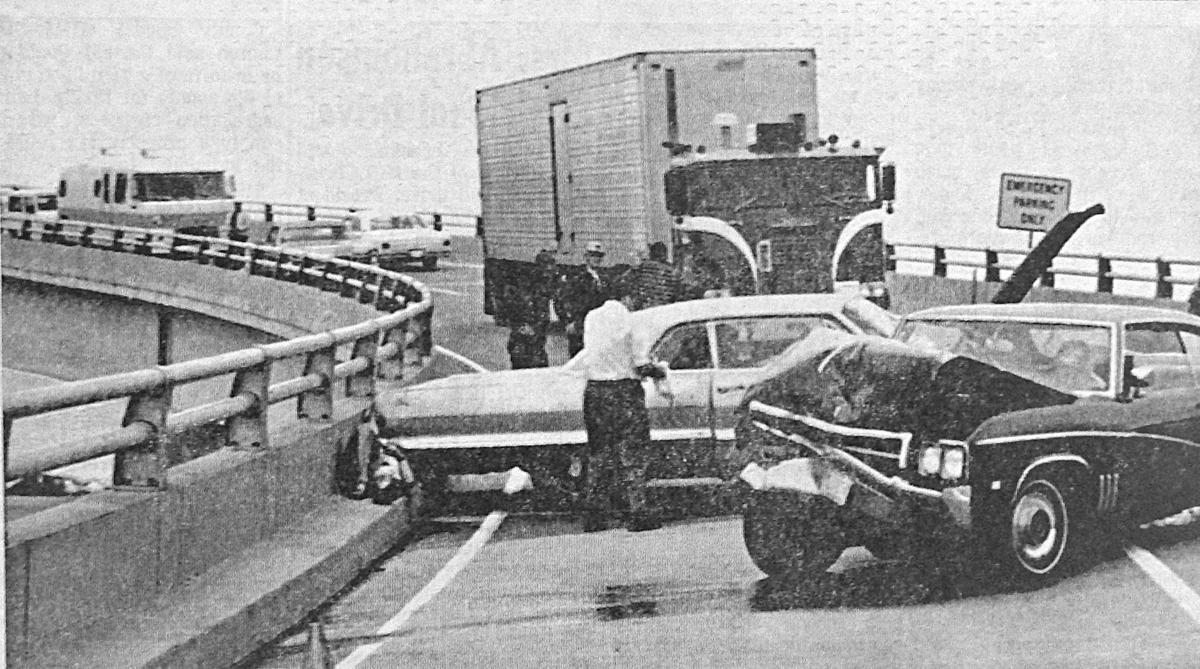 1969 – Southbound lane of Astoria Bridge approach was blocked for a time Monday afternoon after a two-car head-on collision. The four persons in the two cars were taken to Astoria hospitals and were reported in good condition. 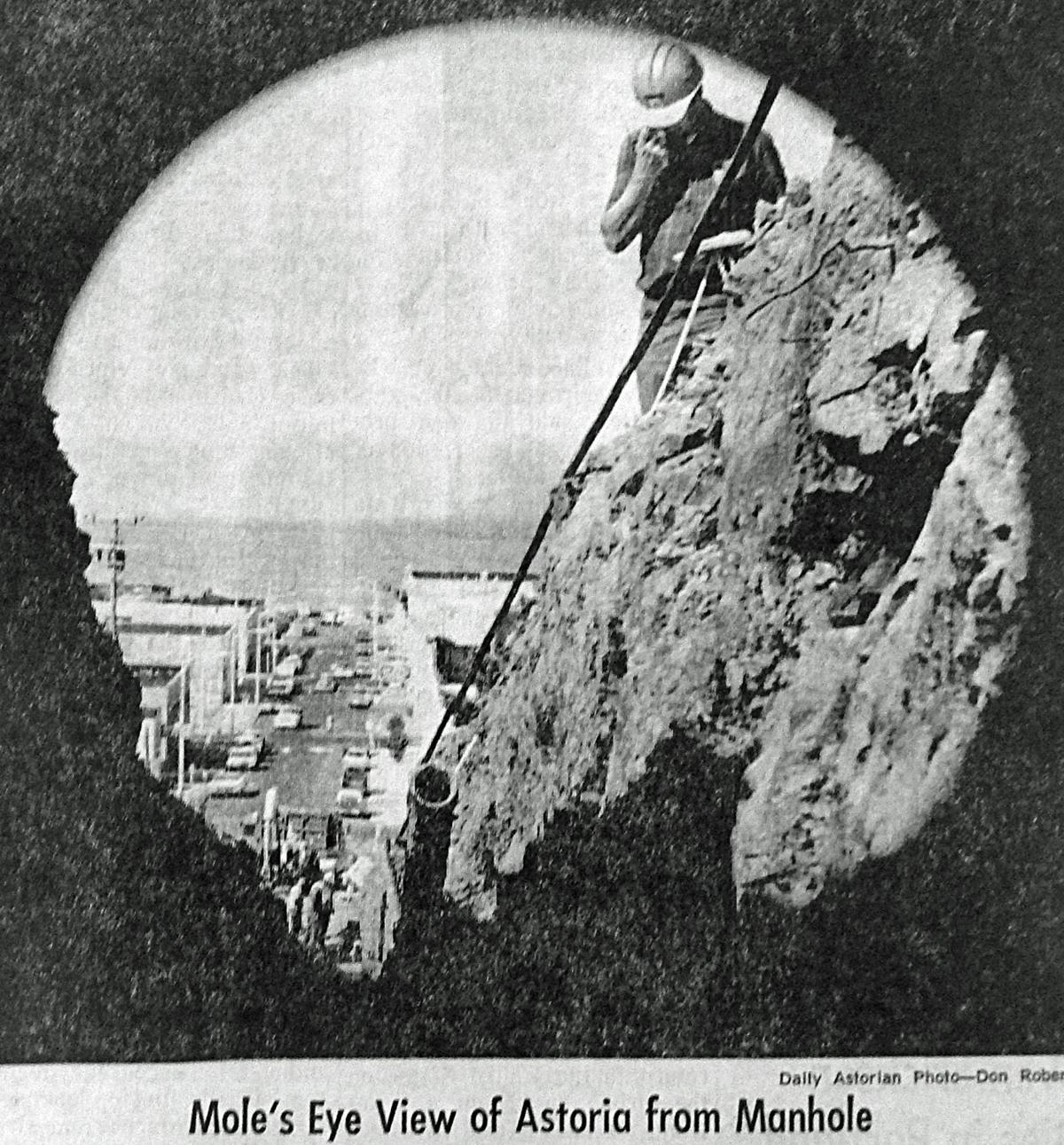 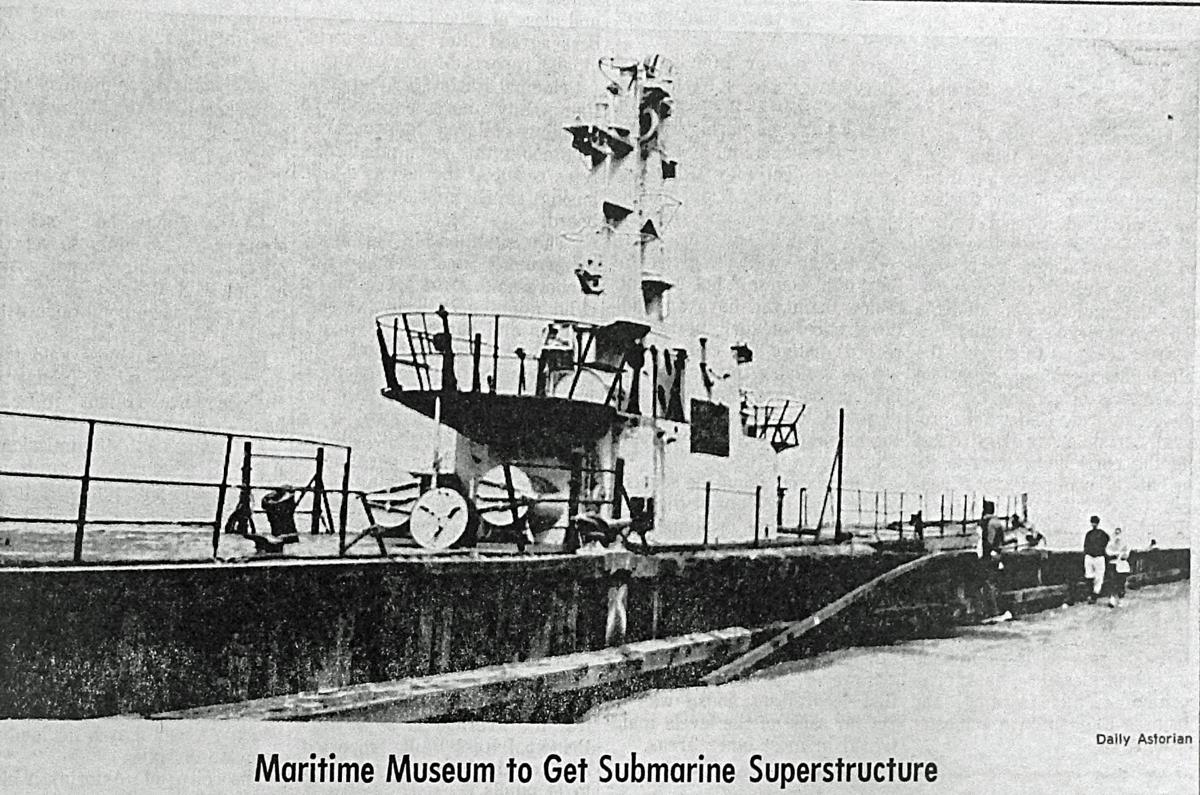 1969 — The Columbia River Maritime Museum will get the superstructure of a submarine.

1969 – Full moorages at the Port of Ilwaco’s boat harbor is one of the contributing factors to the port commissioners’ action Monday afternoon hiring an engineering firm to prepare a new comprehensive plan which will carry them up to 1985.

1969 – Southbound lane of Astoria Bridge approach was blocked for a time Monday afternoon after a two-car head-on collision. The four persons in the two cars were taken to Astoria hospitals and were reported in good condition.

Scientists at the National Oceanic and Atmospheric Administration Point Adams research station in Hammond are tracking Columbia River salmon from the dams on the Snake River tributary to the bellies of birds on the Pacific Ocean ... and beyond.

Some of their research is narrowly focused on habitat restoration sites in Columbia, Pacific and Wahkiakum counties, while other projects stray as far as the flocks of sooty shearwater to nesting colonies in New Zealand.

On Wednesday, NOAA’s Point Adams team took independent scientists from across the U.S. and Canada to research sites in the estuary for an up-close view of their workplace. The trip was a prelude to the Northwest Power and Conservation Council’s Columbia River Science Policy Exchange, which is being held today and Friday at the Holiday Inn Express in Astoria.

When Jewell High students wrote an editorial for the school’s newspaper, The Jay, condemning the Bradwood Landing liquid natural gas project and its political supporters, they had no idea the article would make such a splash when it was published last week.

Now, after former Jewell School Board member Dave Samuelson complained about the story, those students are afraid to speak about why they wrote the piece.

Law enforcement personnel have even investigated Samuelson’s call in case it rose to the level of a threat. One part of the call had Samuelson telling Anderson, “I’m going to come after you.”

Clatsop County Sheriff Tom Bergin said they spent some time reviewing the content of Samuelson’s call, and determined that it was not a criminal act. “It’s a nonissue for us as far as law enforcement is involved,” he said.

The article strongly opposed the LNG company. No student author’s names were included in the story. Also, the writer did not name any politicians.

SeaPort Airlines has seen a slow but steady rise in passengers flying between the Oregon Coast and Portland over the past six months.

But Astoria flights are attracting fewer passengers and generating less income than Newport flights, and the service as a whole is far from paying for itself.

The historic fight to keep the beaches open for the public reached the state Supreme Court today.

The court heard arguments on whether a beach owner can put up fences to keep the public out.

G.K. Drummond, representing William Hay, a Cannon Beach motel owner, said that would amount to confiscation and was unconstitutional. He said if the state wants beaches for the public, it should pay for them.

The case involved Hay’s motel. He does not dispute the fact that the public has used the beach in front of the motel for years, but argues his rights were not impaired by that usage and he retained the right to put up a fence.

Miss Oregon Margie Huhta is on her way home! After a jampacked week at the Miss America pageant, full of much excitement and little sleep, she will board a plane in Washington, D.C., and arrive at the Portland International Airport at 3 p.m. tomorrow.

Port of Ilwaco commissioners Monday afternoon voted to hire R.W. Beck and Associates, Seattle analytical and consulting engineers, to prepare a comprehensive development plan of port facilities, which will include a projection of the demand for moorage space, parking, camper and shoreside facilities in 1975 and 1985.

Destined for display by the Columbia River Maritime Museum in Astoria is the superstructure of the submarine USS Loggerhead. The sub came out of mothballs at the Mare Island Naval Shipyard near San Francisco last week, to towing to Zidell Explorations, Inc., Portland, where it will be scrapped.

Museum director Rolf Klep said tentative plans are to set up the superstructure, or fairwater, at the 17th Street waterfront park.

As part of a $69,000 project, construction of underground conduit has started from Pacific Northwest Bell’s Astoria central office to the intersection of Eighth and Lexington streets, according to PNB Manager R.E. Jensen.

Jensen said the project will employ several firsts. The conduit will be accessible through manholes now being placed in the streets. These manholes, Jensen added, are precast, trucked to the work location and set into place already complete. The conduit between the manholes will be plastic, smooth and round, rather than the square fiber conduit used by PNB in the past.

A big bald eagle that contested the railway right of way with an S.P. & S. freight train locomotive near the John Day station early Friday morning died of injuries sustained in the head-on collision here Sunday afternoon. The bird, measuring nearly 7 feet from wing tip to wing tip, stood its ground on the railway track in the face of the oncoming locomotive, according to Bart Callahan, engineer of the train, and refused to move an inch until struck by the pilot step of the engine.

The end of the war in Europe will touch off perhaps the greatest American celebration of all time, but it will center in the nation’s churches of all denominations rather that in the bars, cabarets and night clubs, a United Press survey indicated today.

Everywhere, V-day celebrations will be tempered by the knowledge that the job is only half done – that Japan still must be beaten.

FORT STEVENS — Two 6-inch brass cannon over 60 years old, which were originally at Manila in the Philippine islands, have been received here and will be mounted on each side of post headquarters.

The cannon, the old breech-loading type, were removed from the islands before the fall of Corregidor and were sent here by Maj. Gen. R.H. Lewis, commander at Fort Lewis, Washington. They are believed to have come from Spain, originally as they bear the Spanish word “agraciado” meaning “guarantee” and the date 1783.

Astoria’s two laundries, with less than 30% of their prewar working force and with a volume of wartime business almost 100% greater than before the war, announced today that next week they will clean up the laundry on hand and then will be forced to close for lack of help.

GUAM — Marine S-Sgt. Lee A Pierce, 28, Astoria, one of the last Americans to leave Guam before the war, came back to the island the hard way.

Member of an engineer unit assigned to the repair of the Orote airstrip, he landed on D-Day, two hours behind the first marine assault troops.

The Astoria Leatherneck, who served 13 months with the small garrison on Guam before hostilities with Japan, was placed in charge of a 16-man detail handling rations, fuel, water and ammunition on the beach when the battle to retake the island began.

For outstanding performances of duty against the enemy on Bougainville, Pvt. Junior A. Gray of Warrenton has been awarded the combat infantryman’s badge, it was learned here this week. Gray, overseas for nine months, is a machine gun ammunition carrier in a veteran infantry regiment, which fought on Guadalcalal in February, 1943. Again on Bougainville the regiment distinguished itself in some of the bitterest fighting of the island war against the Japs.