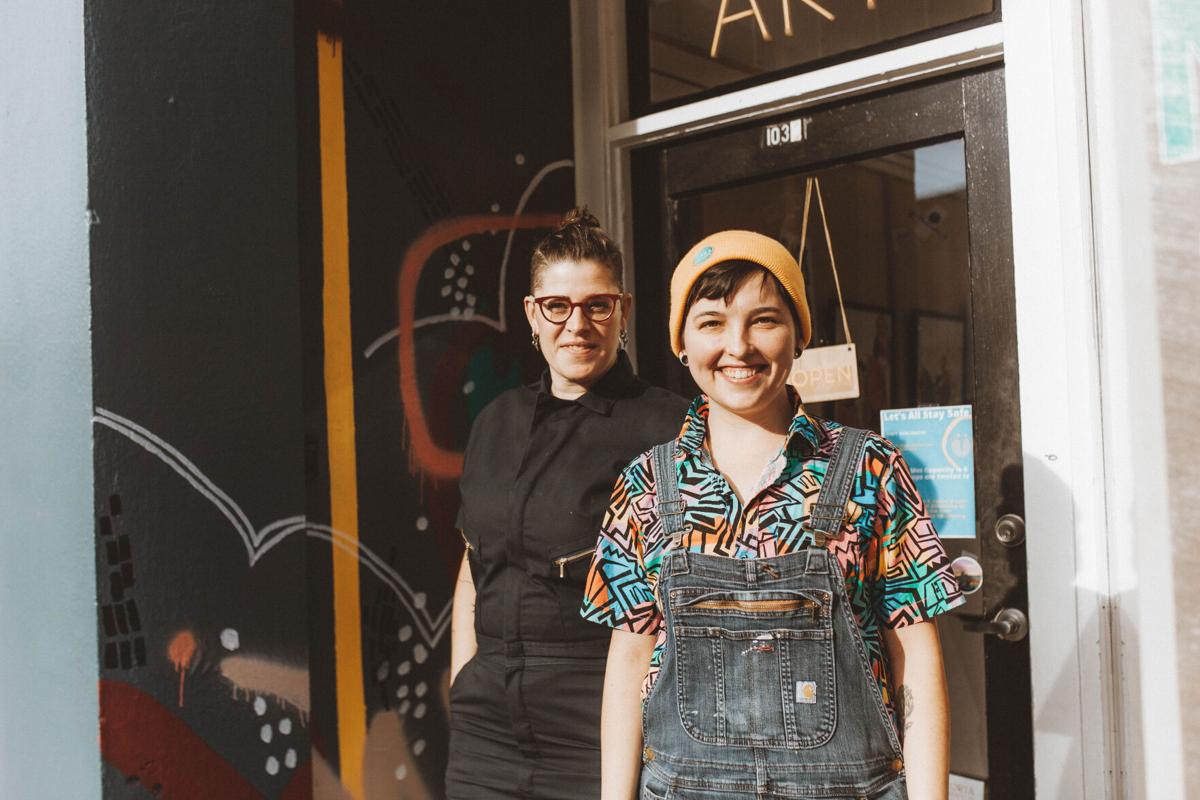 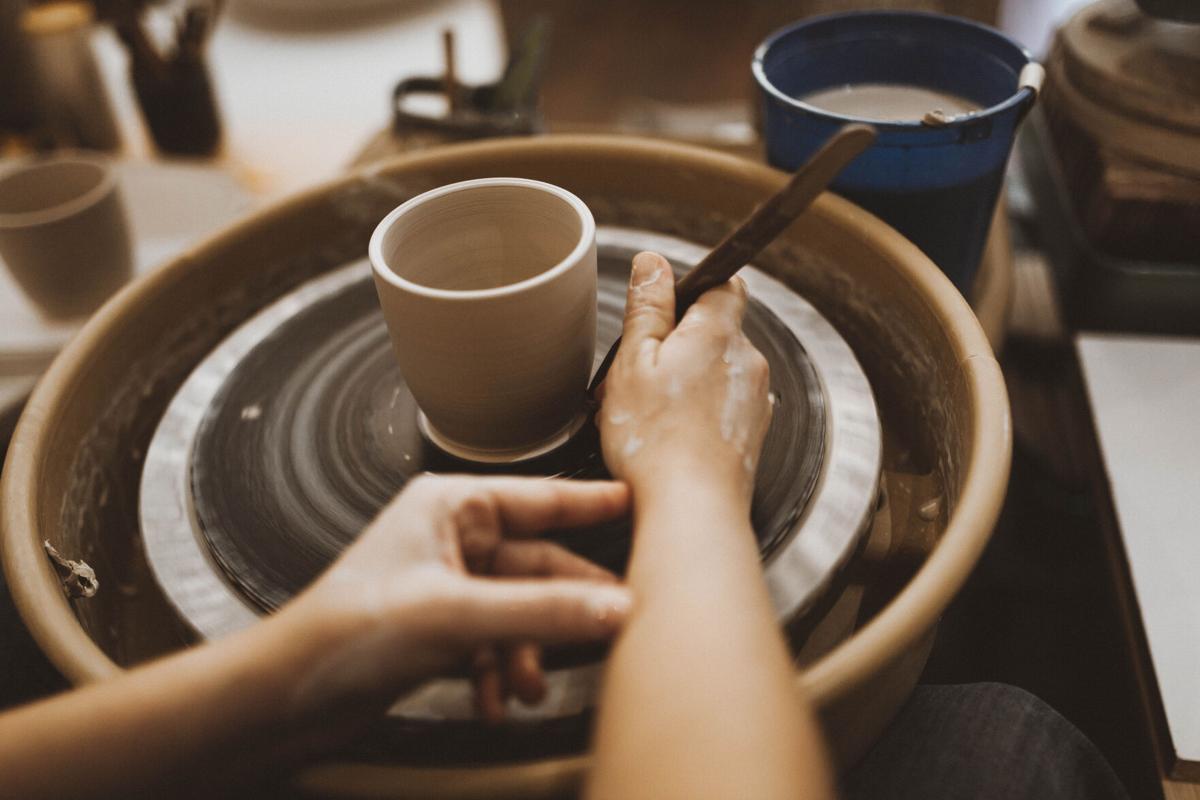 Long trims off excess material while finishing a cup. 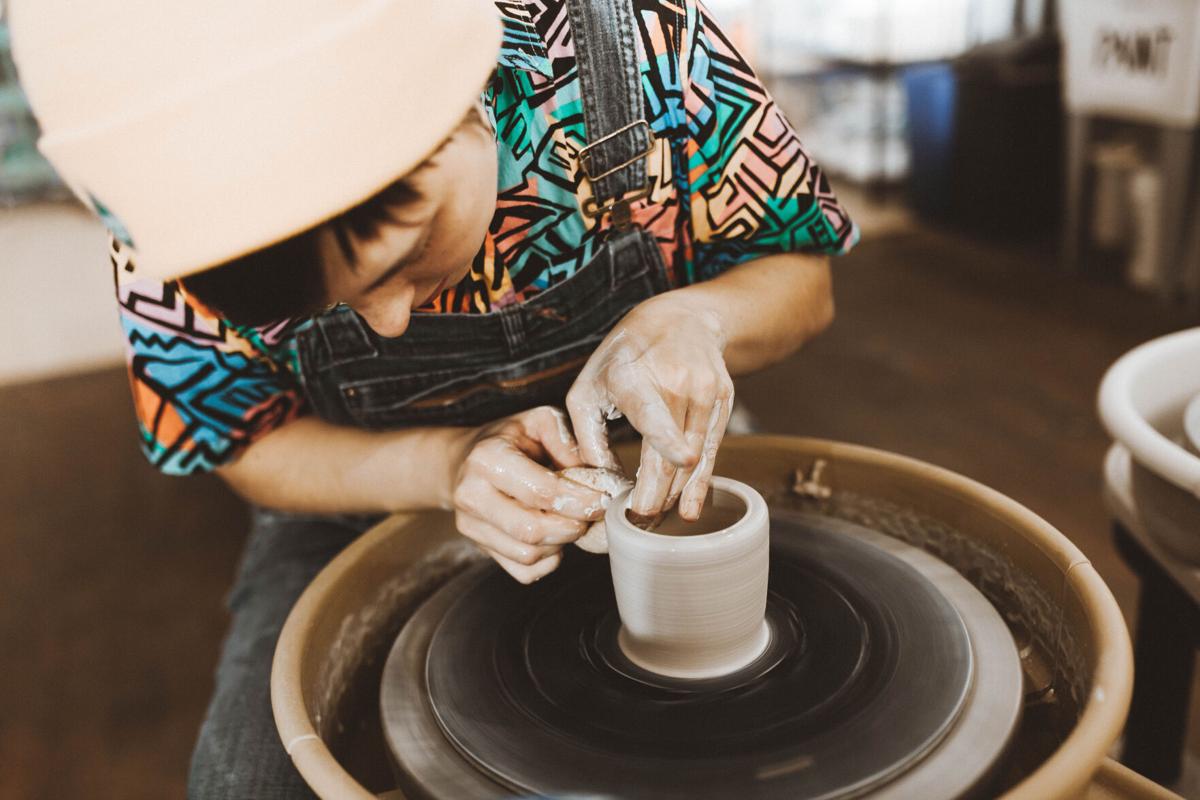 Long pulls the wall of a cup. 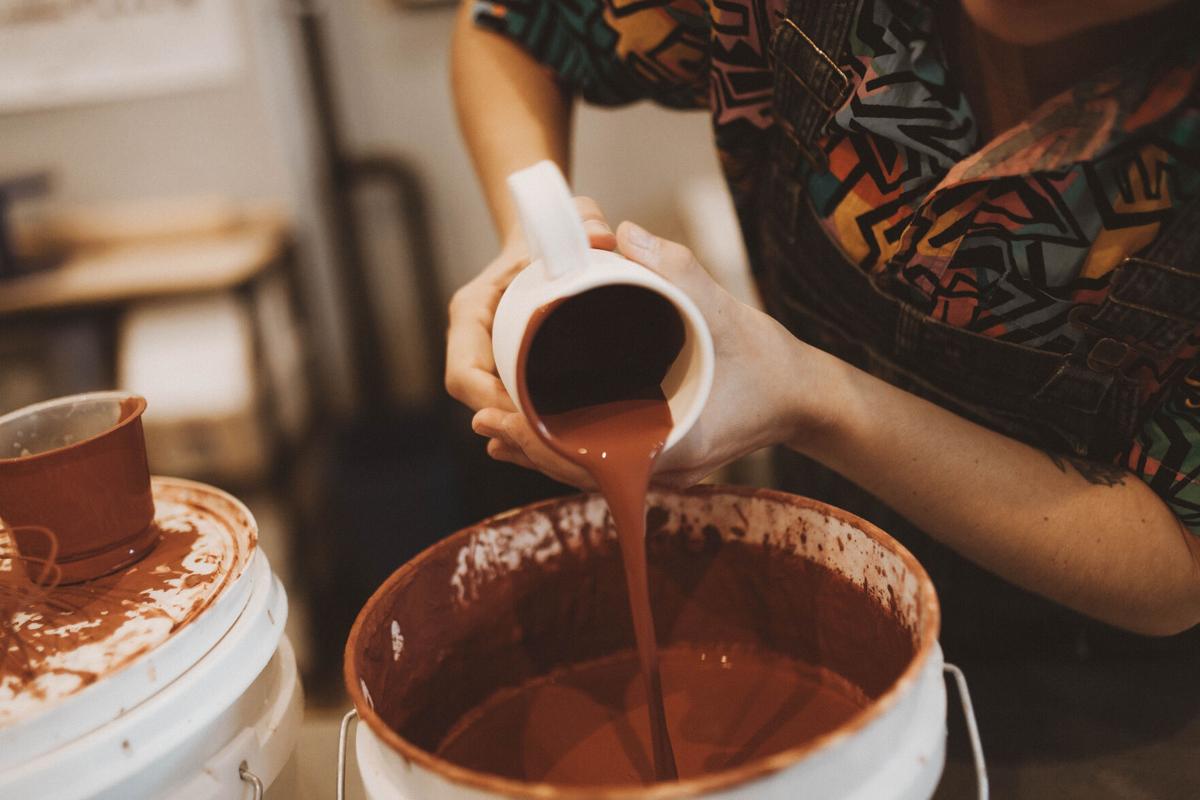 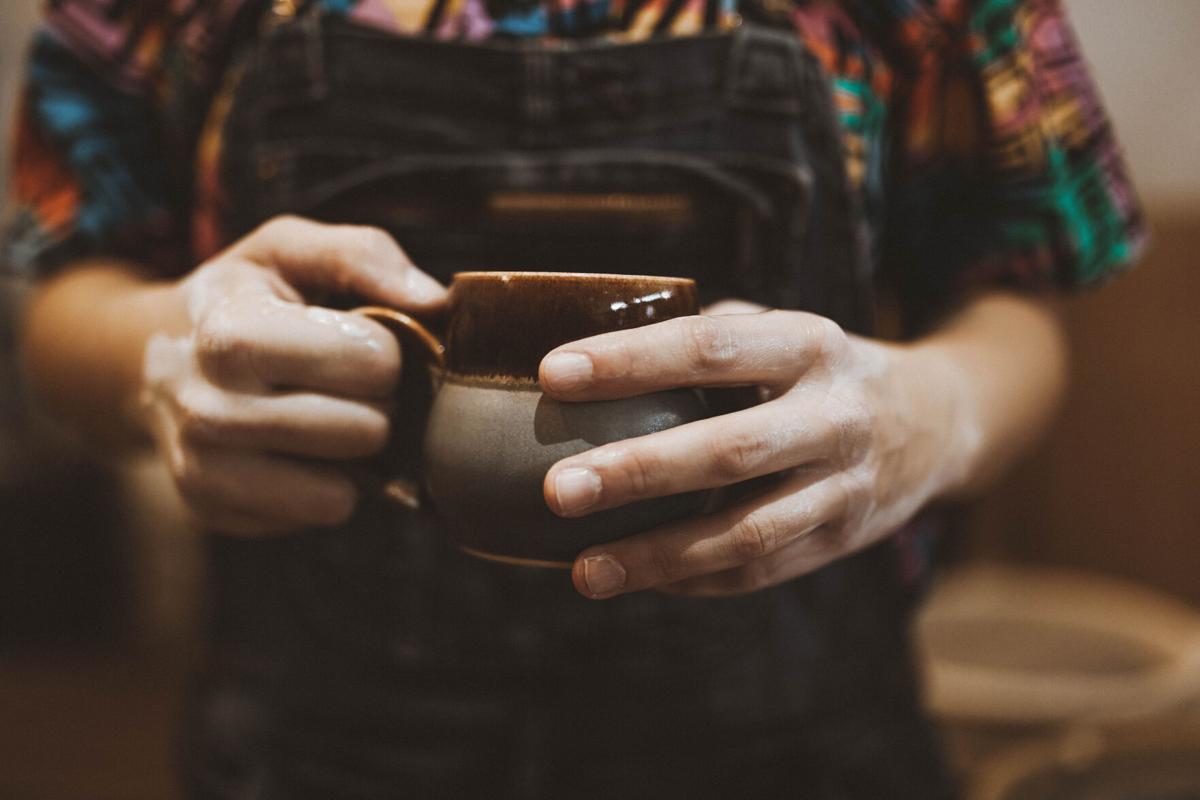 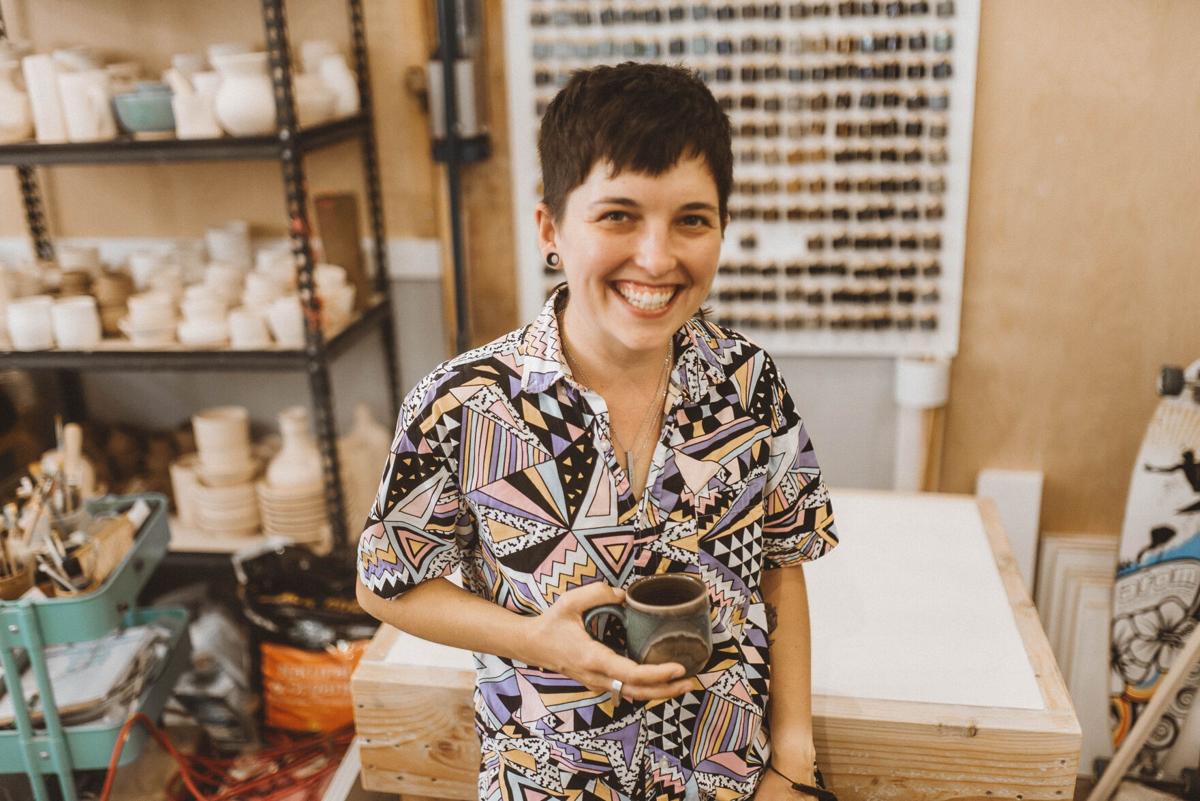 Long stands inside her studio.

Sitting in her Astoria studio, Audrey Long plops a rectangular piece of clay onto a pottery wheel. As the wheel spins, she starts pulling at the malleable material, rounding its edges as it becomes more cylindrical. Instead of forcing a specific shape, Long lets the clay move on its own accord. By the second or third pull, magic happens.

“It’s that last little moment of pull when you get to the top, look down and see what the clay has done in your hands,” she said. “That moment is wonderful.”

Long is an award-winning ceramicist with more than 18 years of professional experience. She is also the co-owner and creative director of Cambium Gallery, which opened in August 2020.

Long is from Detroit. In ninth grade, she found that her high school had an exceptional pottery program, ran by a teacher who obtained his doctorate in ceramics. By taking every class in the program, she learned how to build a kiln, fire her own work and more.

Long earned a bachelor’s degree in crafts with a focus in ceramics from the College for Creative Studies in 2008. Around that time, Long worked at the Museum of Contemporary Art as an installation assistant and went on to become an education studio technician at Detroit’s historical Pewabic Pottery, a ceramic school and studio that has operated for over 100 years.

“From Detroit, I was like ‘I got to go bigger. I got to go big right now.’ So I decided I was going to apply to some residencies and I got a residency in Miami,” she said.

During her year-long residency at Bakehouse Art Complex, Long loved her work but didn’t love living in Miami. She faced challenges getting art supplies and found the art market focused more on paintings and large sculptures rather than ceramics.

Following a visit to Astoria, Long decided to move to the area.

“I found Astoria felt a lot like home before I even moved here,” she said. “It felt like a good fit and I was really filling a need … There weren’t any ceramics (courses) that were community-based, except through the college.”

Before she knew it, she was running Audrey Long Ceramics out of a studio in the Astoria Visual Arts building. She also began holding classes to provide the community with another creative outlet. In one class, Long met Kirista Trask, who happened to be an Astoria Visual Arts resident with a studio of her own in the building.

Trask is an abstract painter who obtained a bachelor’s degree in fine arts with a business minor from the University of Oregon. She is a seventh-generation Oregonian who has lived in towns from Oak Ridge and Cottage Grove to Eugene and Astoria.

In 2019, she began taking classes with Long to gain a better understanding of crafting pottery. During that period, Trask was working on a grant-funded project that documented the stories of trauma and resilience from eight generations of women in her family. With Long’s help, the pair put together a dinner table with a plate for each woman in Trask’s family.

“Working with another person and somebody like (Long) who’s incredibly skilled and intelligent, artistically, you know, we formed a real bond right off the bat,” she said.

The dynamic duo have been dating since their first collaboration. In time, Long and Trask pondered how they might shine a spotlight on underrepresented artists and played with the idea of hosting pop-up shops as a side project.

After the U.S. went into lockdown as COVID-19 outbreaks sprouted nationwide, Trask lost her studio, despite having recently moved into the new art space. The owner of the Astoria Visual Arts building had moved out of his workshop and offered the pair the larger space.

When the opportunity presented itself, Long and Trask couldn’t resist. Instead of a pop-up shop, they decided to open Cambium Gallery. Trask is the gallery’s business director.

Long and Trask’s goal for the gallery is to amplify the voices and works of artists who are often overlooked by the art market. They also donate 10% of a show’s sales to an organization that directly works in the topic or field represented in the show — without touching the artist’s payment.

Nowadays, Long spends her time in the studio throwing clay and adding more pieces to her collection. She mostly focuses on creating functional ceramics for everyday use, such as mugs, plates and spoons.

Through her work, Long says she hopes to remind people to connect with the objects they use on a day-to-day basis, to make those moments more meaningful and intentional.

“I make my own glazes, I fire my own work. It’s coming straight from my hands to yours,” Long said. “There’s something really intimate about sharing an object with somebody … It’s almost like sharing a meal with somebody that’s not there.”

Ray Garcia is a contributor to The Astorian, Coast Weekend and the Center for Journalism and Liberty.