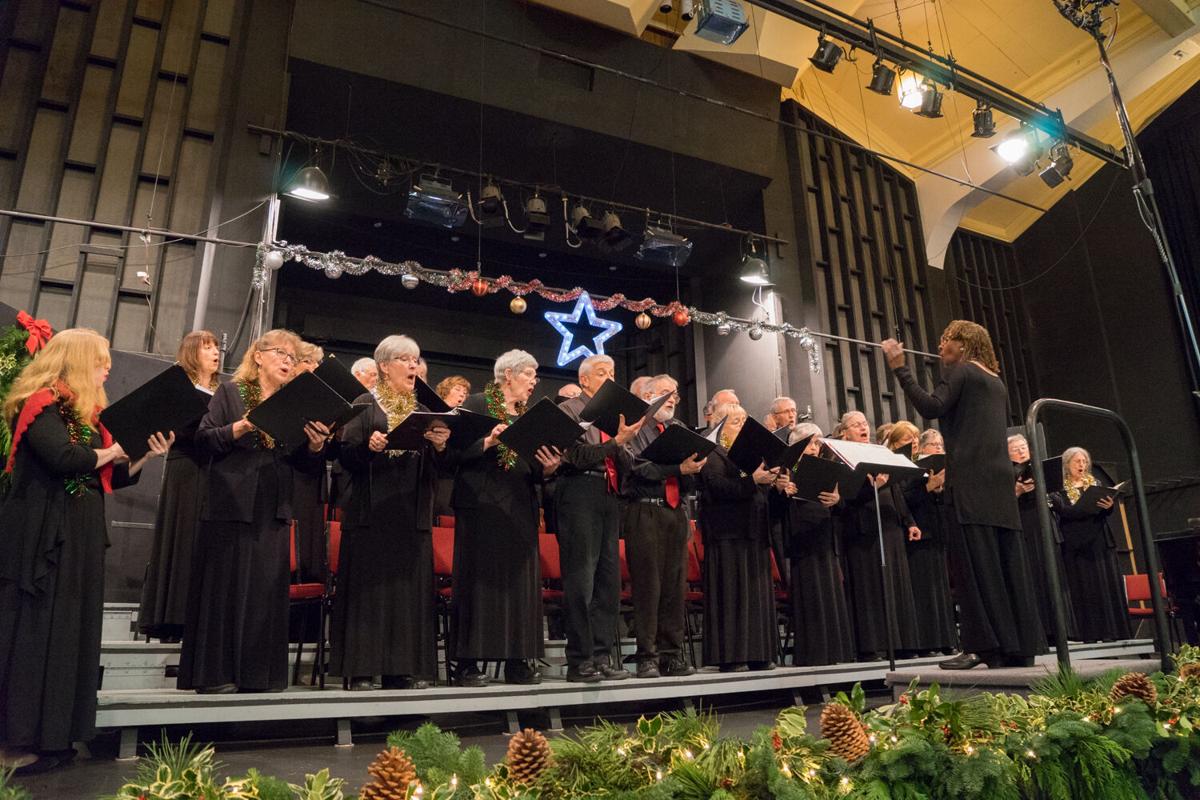 Denise Reed leads the North Coast Chorale in a concert before the coronavirus pandemic.

Last Sunday, as one of the first in-person events to happen in Astoria since March 2020, the North Coast Chorale held the last in a series of three live concerts at the Charlene Larsen Performing Arts Center.

The other two concerts were held earlier in April. The concerts featured compositions including “Lux Aeterna” and selections from “The Messiah.”

“This spring concert was the one we were preparing for in January, February and March 2020 to present to the community,” said Denise Reed, the chorale’s director. “So a year later, after rehearsing the music to near perfection, I thought we needed to fulfill that performance as part of the release of the pent up stress from not being able to perform it as a total group.”

The North Coast Chorale is a non-profit organization whose mission is to present notable choral literature and promote music education to the community. The organization is part of Partners for the PAC, a coalition of local organizations that maintains the Charlene Larsen Performing Arts Center as a space for public arts and educational events.

The chorale is one of the ensembles from Partners for the PAC that experienced disruptions in its ability to congregate and perform in front of an audience. Last October, the group managed to hold mini-concerts in the parking lot of the Astor Street Opry Company and in Peace Lutheran Church’s yard.

After last weekend’s performances, however, live events appear to be making a comeback — with COVID-19 safety precautions, of course.

“The North Coast Chorale singers are very excited to be performing again for a live audience. Although small in number, the enthusiasm of the Friday evening spectators was very gratifying,” said Cindy Van Arsdall, the chorale’s vice president and press person. “Each singer left that evening with the satisfaction of having pleased this group of people and the excitement of pleasing more folks with our next concert.”

Each performance was limited to an hour. Everyone, from performers to audience members, had to wear masks. Social distancing was enforced, with no more than 50 tickets sold per performance.

The chorale was the force behind the decision to host live performances again in the performing arts center, said Bereniece Jones-Centeno, executive director of Partners for the PAC. The chorale, she said, did its due diligence to research the safest practices for performing choral music.

“We were in support of that because the isolation of the coronavirus was just horrible and has continued to be really difficult,” Jones-Centeno said.

The chorale followed guidelines established by a special scientific aerosol committee convened by the American Association of Choral Directors. Such guidelines include the use of masks, social distancing and only spending 30-minute periods of activity indoors.

“During all of our rehearsals, we were masked and short timed,” Reed said. “We rehearsed … outside then moving inside to other locations that were open and allowed the aggressive movement of air, using fans to move the air swiftly.”

In preparation for live events during the pandemic, Jones-Centeno said Partners for the PAC applied to the Oregon Cultural Trust’s Coronavirus Relief Fund. With the funds, they hired professional cleaning staff, installed hand sanitizing stations and replaced the filters of the center’s ventilation system.

The chorale’s representatives and the center’s directors, Jones-Centeno said, held many conversations to ensure everyone was on the same page regarding the safety and wellness of audience members and performers.

“Help us help you stay safe. And help us help the chorale stay safe by getting your tickets online so that the automated system works,” Jones-Centeno said.

Message from the music

One of the main compositions for the chorale’s spring concert was titled “Lux Aeterna,” which means eternal light. After a year of living in the coronavirus pandemic’s shadow, it’s hard to ignore the relevance and messaging of the concert at hand.

“On the note about the actual music, I felt it was time to let a little light into the lives of our audience and community who also were in a kind of vocal music desert,” Reed said. “My hope is that the audience is then able to look at their own hard stories during the COVID pandemic — emotional, economic, medical, etcetera. Many hard stories through which we hope are able to see the light at the end of the tunnel.”

The North Coast Chorale celebrated its 30th anniversary last year, though the celebratory concert was canceled due to the pandemic. The chorale will hold a “Belated 30th Anniversary” concert series in June, featuring the group’s favorite melodies from more than 60 performances.

Ray Garcia is a contributor to The Astorian, Coast Weekend and the Center for Journalism and Liberty.