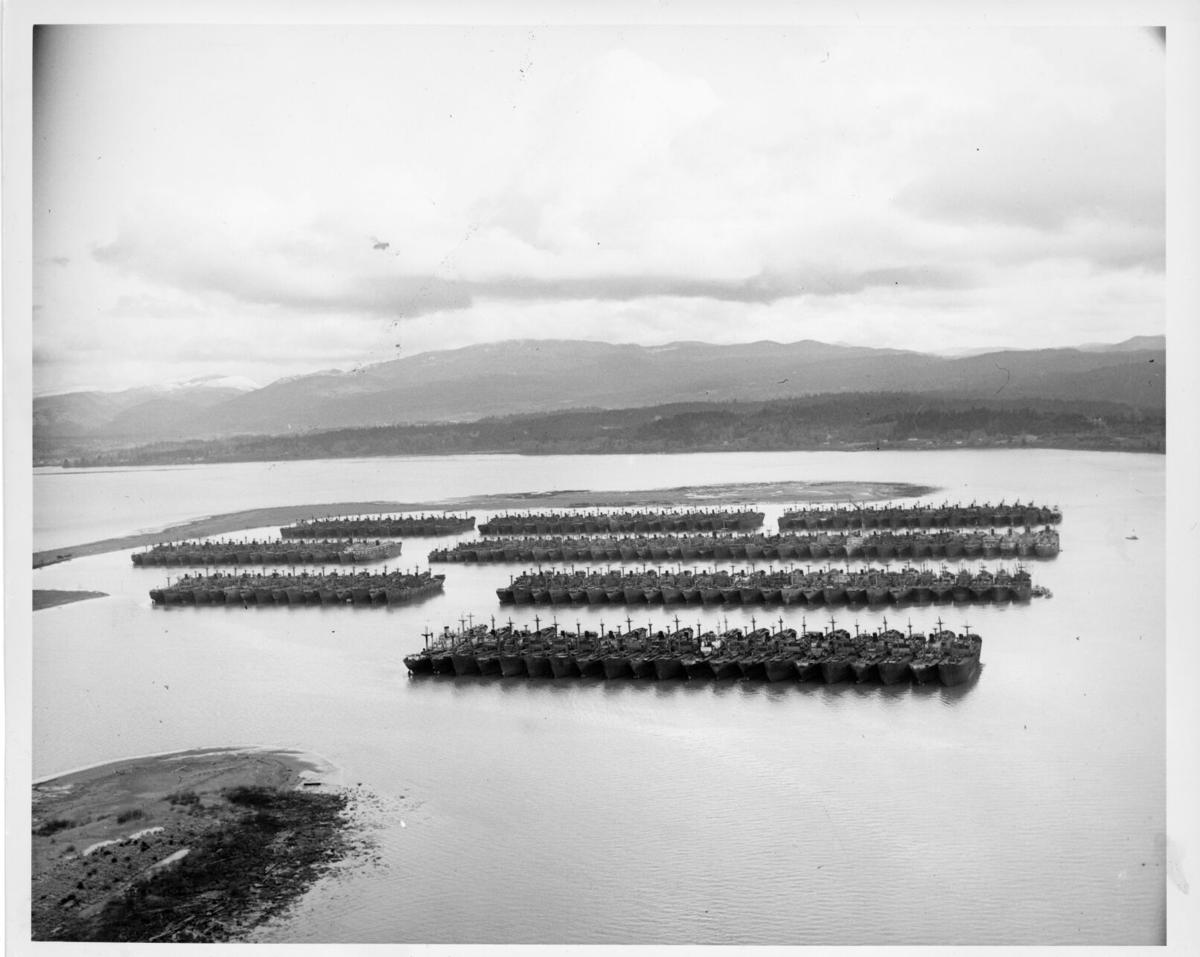 Tongue Point and the Lower Columbia River Highway in the early 1900s. 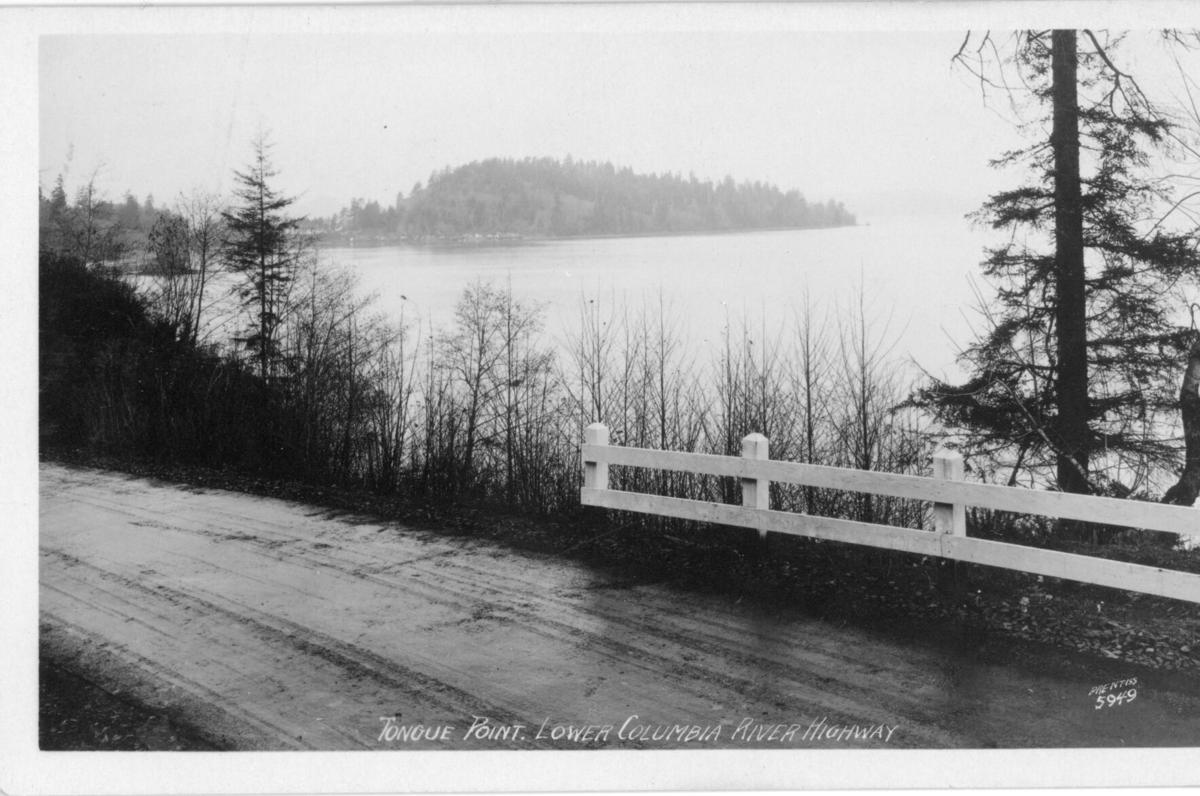 An aerial view of the Tongue Point naval base. 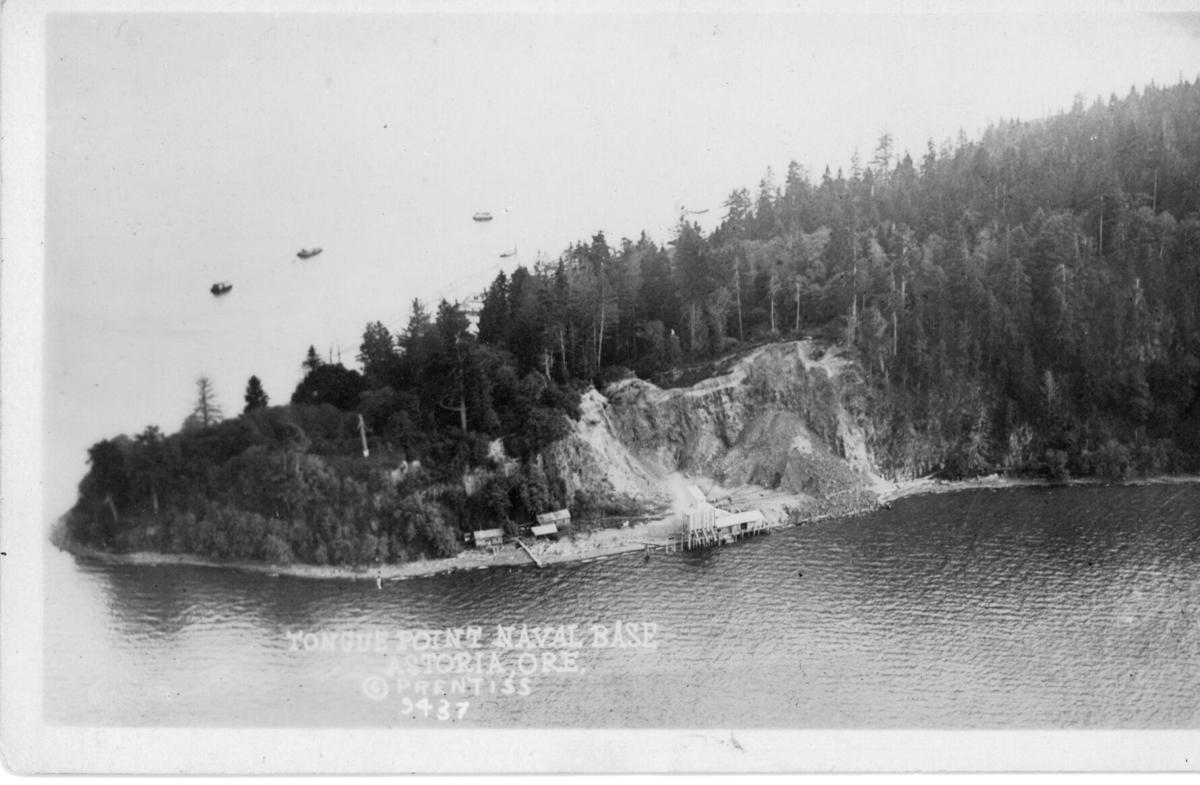 The ‘Mothball Fleet’ in Mott Basin during the 1950s.

Tongue Point and the Lower Columbia River Highway in the early 1900s.

An aerial view of the Tongue Point naval base.

The ‘Mothball Fleet’ in Mott Basin during the 1950s.

Among his many talents, Henry J. Kaiser is considered one of the foremost fathers of American shipbuilding. One of his most prominent accomplishments was his establishment of Kaiser Shipyards, which produced the Liberty and Victory ships and Casablanca escort carriers during World War II.

Astoria and other coastal communities found themselves in the middle of the war effort. The military considered the mouth of the Columbia River to be strategically important and at risk of attack from the Axis powers. As time went on, Astoria, Tongue Point and the Columbia River became heavily involved in the war effort. Each played a significant role in Kaiser’s innovations.

Kaiser signed a contract with the United Kingdom to build cargo ships for the war effort in 1940, before the U.S. was directly involved in the war. To accomplish this, he started looking for coastal communities where he could set up shop. He built two shipyards near Portland and another near Vancouver, Washington. Both experienced a cultural and economic boom from the increased demand for production.

One of Kaiser’s first major projects was designing the first of the Liberty ships, which have become iconic to his career. Kaiser tweaked several techniques to expedite production of the ships, like welding instead of riveting parts of the ship together. His shipyards mass-produced ships at a rate that was unheard of at that time. In Richmond, California, a Liberty ship was built in four days, 15 hours and 29 minutes for publicity.

Kaiser expanded his work even further after the U.S. officially joined the war. His shipyards accounted for almost one-third of the ships that had been commissioned by the U.S. Maritime Commission between 1939 and 1945.

Kaiser needed a place to test his designs and put them out to sea. A significant portion of Tongue Point was originally deeded to the U.S. government by Clatsop County in 1921. More land was acquired over time. The land was used in the early- to mid-1920s as a submarine and destroyer base but was typically unoccupied until the U.S. Navy began converting it to a naval air station in 1939.

From 1941 to 1945, the air station featured seaplane hangars, refueling stations and other repair and maintenance facilities. The U.S. House Naval Affairs Committee referred to the air station as, “without doubt one of the finest naval air stations in the country.”

Concrete ramps were built to allow the amphibious consolidated PBY Catalina seaplane to access the river. The Navy decided it was too dangerous of an area to use them after a plane crashed into logs floating through Cathlamet Bay, killing eight people.

One of the site’s primary duties was pre-commissioning and commissioning the Casablanca-class escort carriers built by Kaiser’s shipyards in Portland and Vancouver. Kaiser wanted to produce his product as quickly as possible. He convinced the Navy to let him skip its more involved inspection in favor of a survey by the Astoria Marine Construction Co. using their specifications.

The “baby flattops” would run their sea trials on the Columbia River, where they would turn back and forth between Tongue Point and Astoria at full speed. By doing so, they proved a level of maneuverability that was unlike anything else at that time. Any other vessel of that size would have had to stop and back up or receive some other kind of assistance. If the carrier passed its sea trials, it would be taken out to the open ocean to await its pilots and crew.

After World War II ended, the Navy built eight concrete piers to accommodate ships that would no longer be used in active service during peacetime. This reserve fleet, otherwise known as a “Mothball Fleet” at Mott Basin, held between 200 to 300 ships during its peak in the 1950s. Tongue Point held onto them into the early 1960s, before the Astoria reserve fleet facility was officially decommissioned in 1963.

Today, Tongue Point is home to one of the first Job Corps centers established in the U.S., U.S. Coast Guard facilities and a portion of the Lewis and Clark National Wildlife Refuge. Tongue Point Job Corps is currently the only site offering a seamanship program in the country. The area continues to serve a variety of purposes for the maritime industry and remains a proud beacon of Astoria’s history.

Julia Triezenberg is an educator at the Columbia River Maritime Museum. She is a graduate of the University of Michigan.