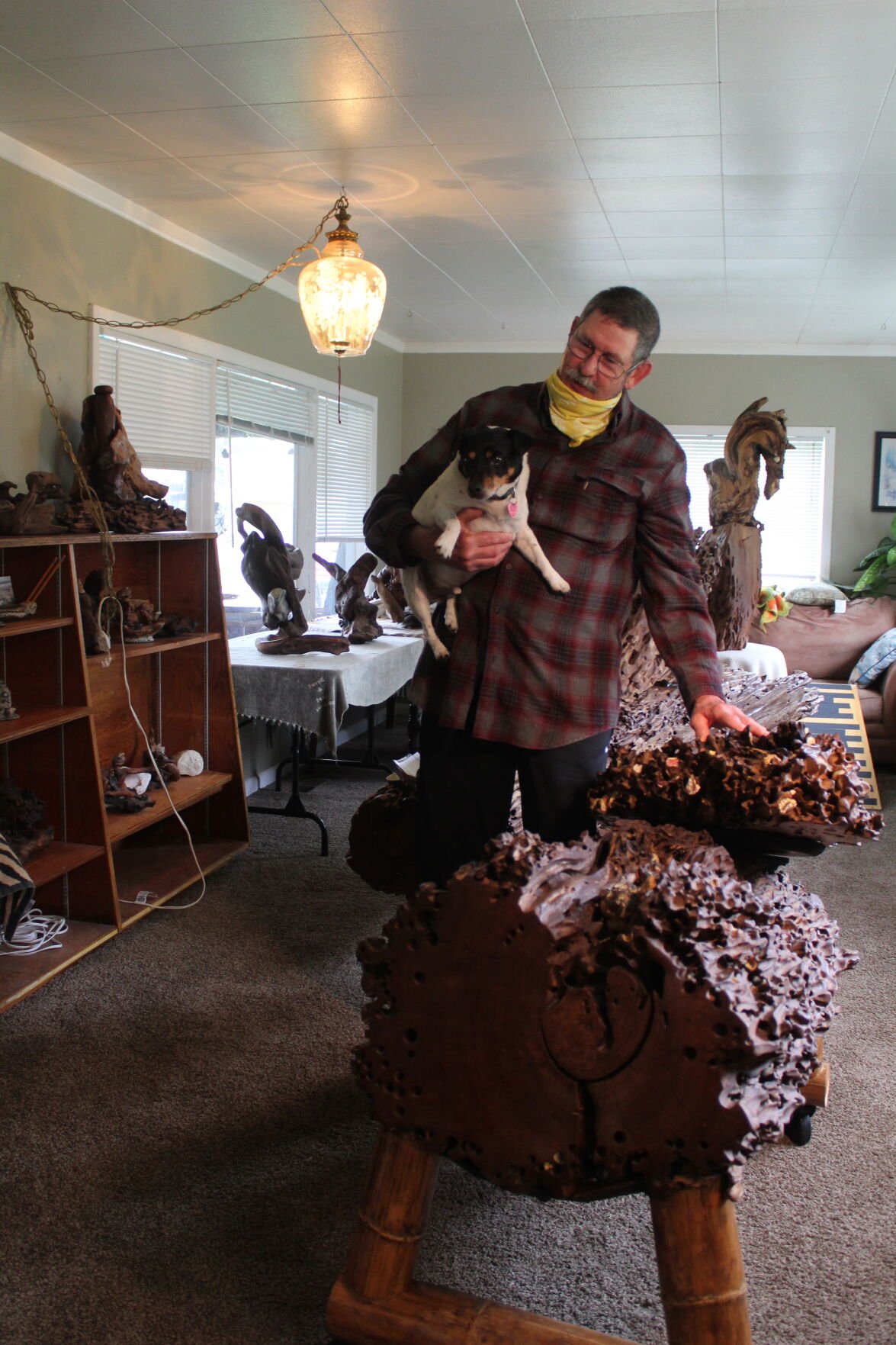 Brent Thompson stands with his dog 'Hunter,' who helps him find unique pieces of driftwood. 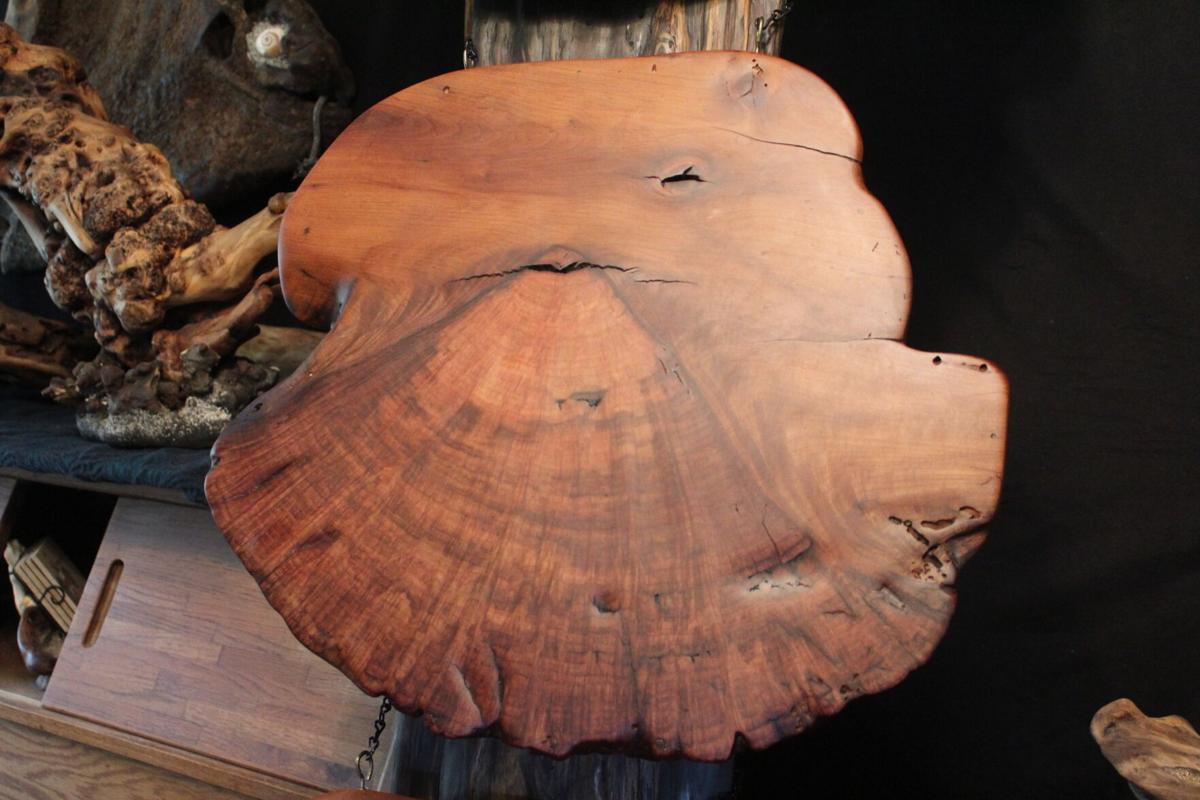 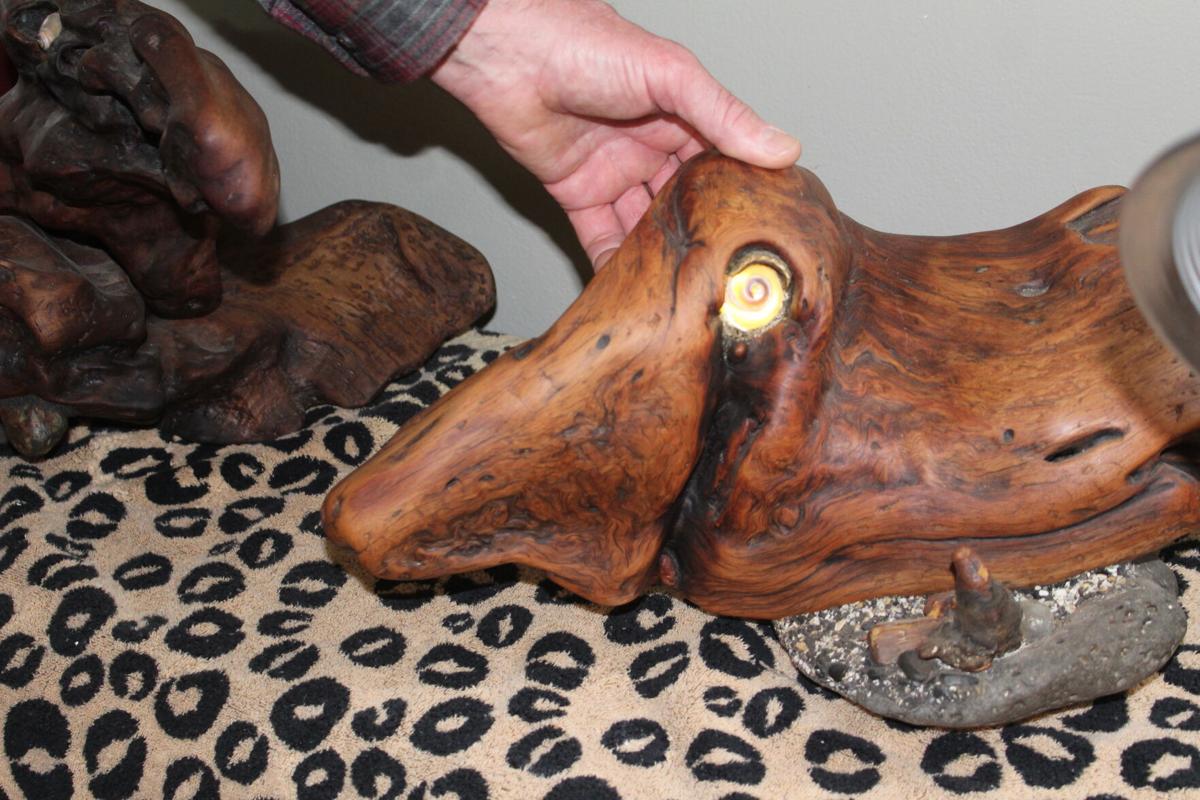 Thompson presents one of his pieces. 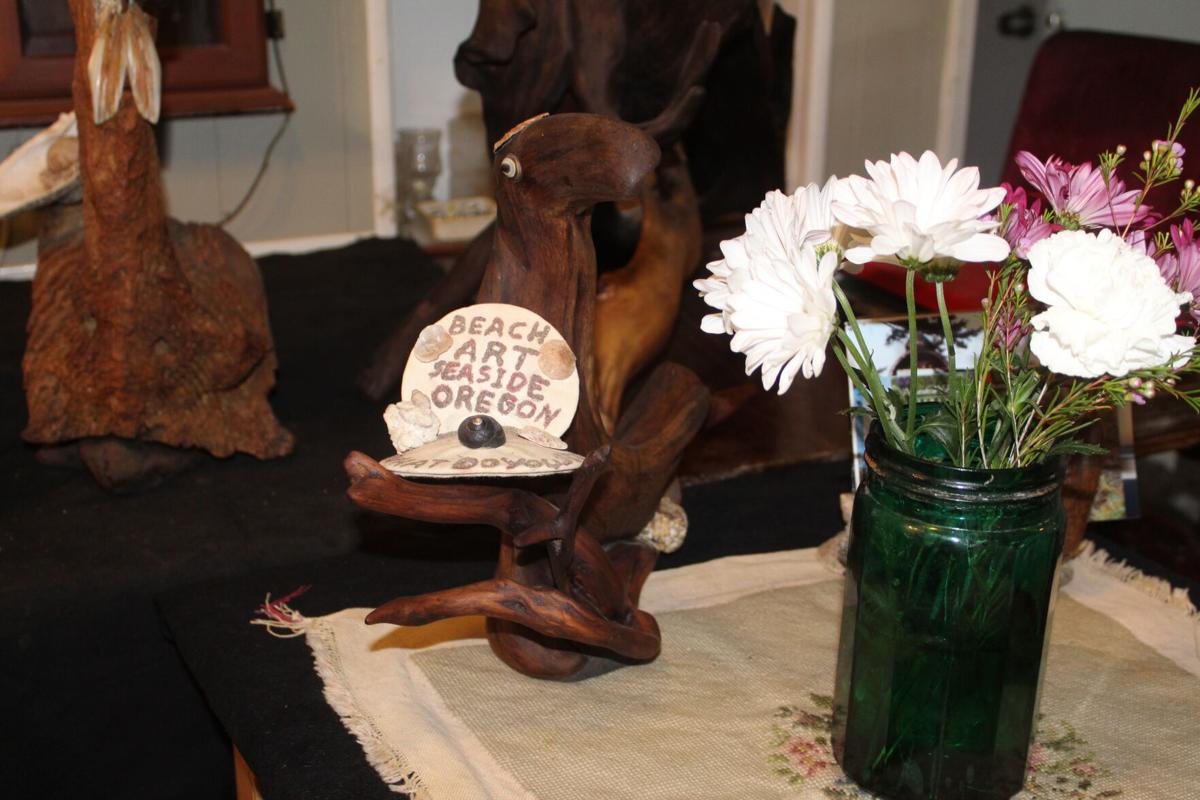 Thompson's collection features personalized pieces of driftwood and other items. 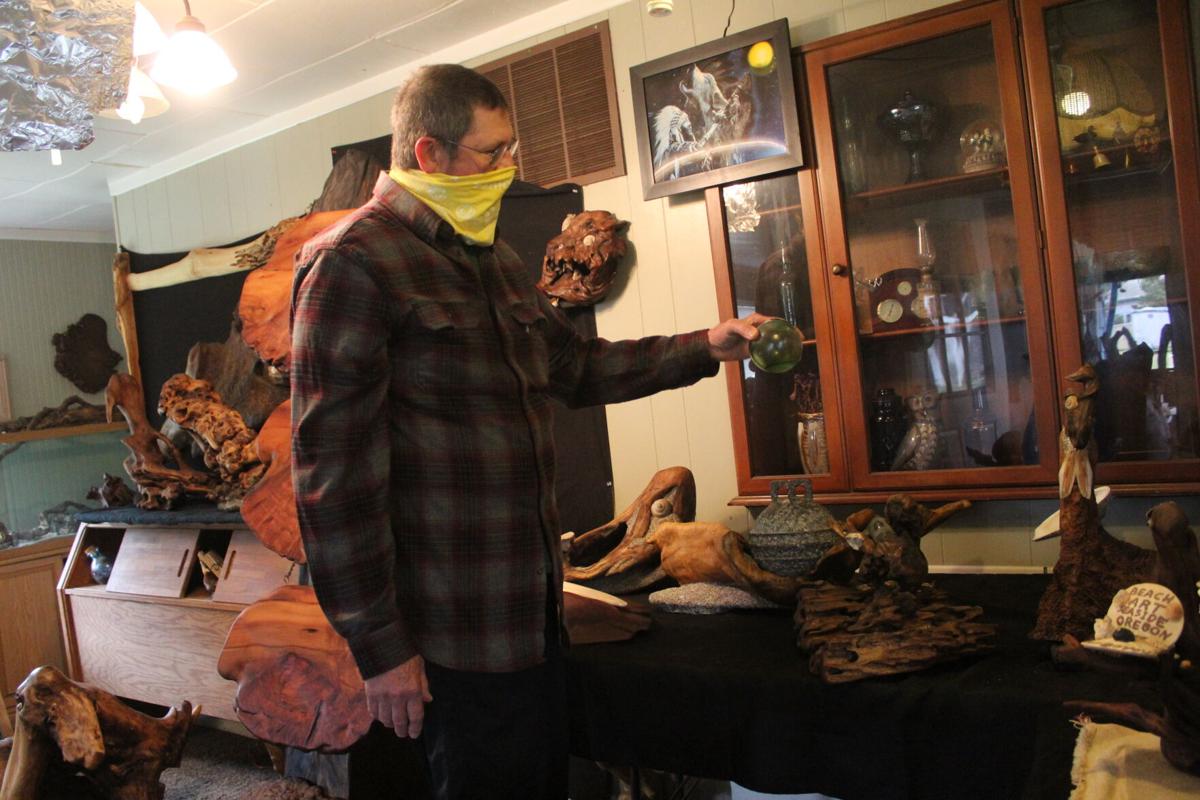 Thompson discusses his collection, which is located in his home. 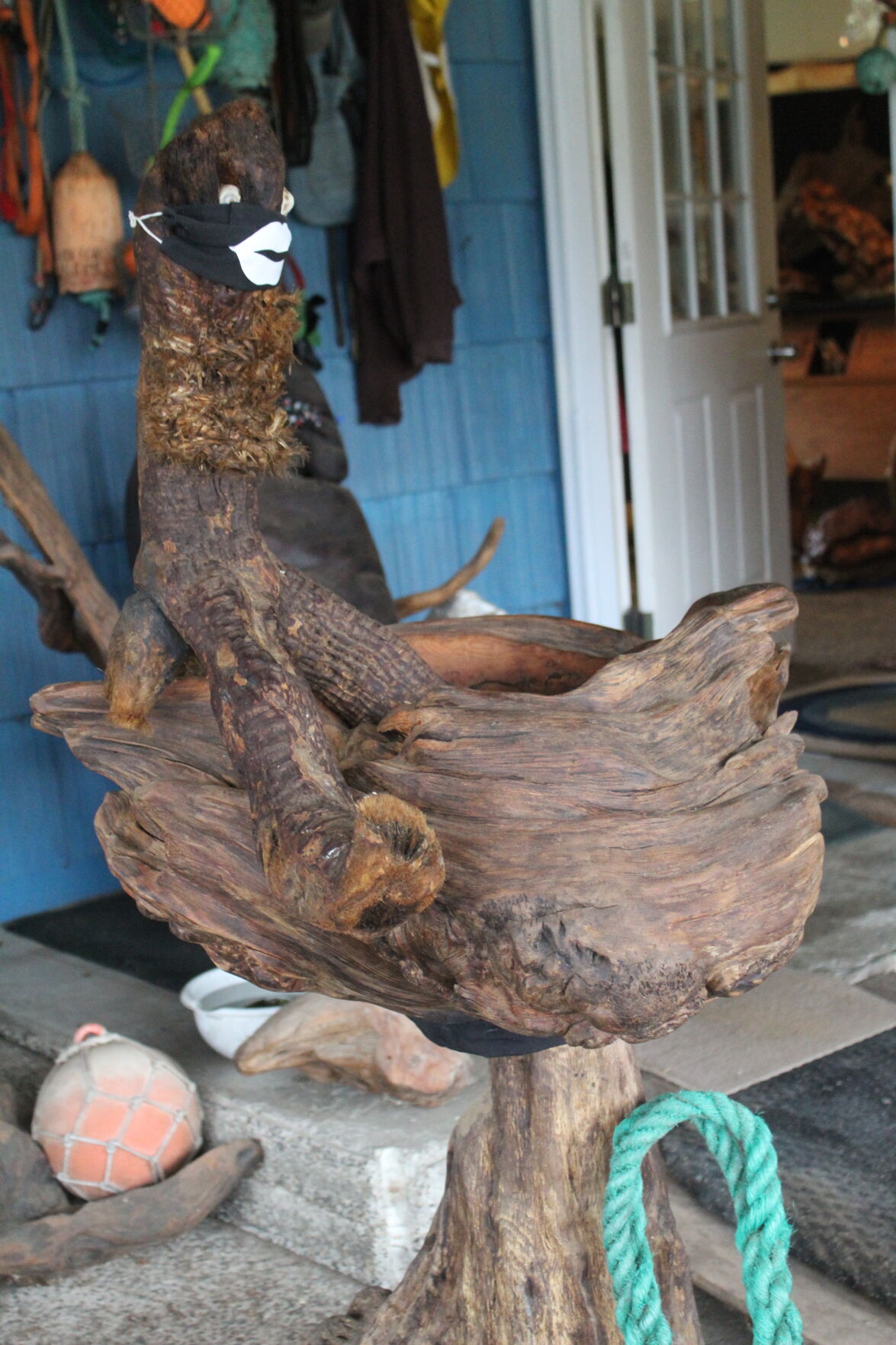 Brent Thompson stands with his dog 'Hunter,' who helps him find unique pieces of driftwood.

Thompson presents one of his pieces.

Thompson's collection features personalized pieces of driftwood and other items.

Thompson discusses his collection, which is located in his home.

Seaside artist Brent Thompson remembers the first piece of unique driftwood he discovered more than a decade ago. It immediately caught his eye, as it resembled a pelican with a broken wing. He removed the barnacles and seaweed cloaking the wood, then added shells for the eyes, further refining the similarity.

A little while later, when he was again traversing a beach on the North Coast, he happened upon a few pieces of driftwood that looked like ships.

“After that, I was sold,” Thompson said, adding he recalls thinking of the pieces, “You couldn’t carve it to be that cool.”

Those initial discoveries formed the basis for a collection that has proliferated over the years to include more than 50 hand-worked driftwood sculptures, all made from pieces found along beaches in between Seaside to Fort Stevens State Park.

The goal for Thompson, who moved from Northern California to Oregon 16 years ago and works as a seasonal assistant ranger in Ecola State Park, was “to make the coolest collection of ocean wood art in the world.”

In scouring the beach for pieces to add to the collection, often with the help of his dog “Hunter,” Thompson keeps an eye out for a few main elements: a cool grain in the wood, interesting knots, a unique shape or natural features that resemble eyes or noses.

“Having a good imagination really helps with that,” he said.

The next step is touting the pieces home — which is easier for some than others — and then cleaning off the wood and removing any portions that are deteriorating.

Next, Thompson often sands down the wood and adds oil to strengthen and preserve it. When creating the sculptures, he will sometimes incorporate other found objects, such as metal, glass buoys or pieces of iron. One of his pieces features an iron-coated sand dollar.

Thompson’s collection includes a wide variety of wood species, including oak, maple and cedar. He has two large sculptures made from old-growth mahogany that washed up near Camp Rilea in Warrenton. One of them has been dubbed the “thought-catcher.” Another of his favorite pieces encompasses three circular slabs of pecan burl wood that bear images resembling a volcano in various states.

“It’s the coolest, water-etched, by-Mother-Nature natural painting in the world,” he said.

He described his process as “wood-idermy.” He identifies the personality or spirit embodied in the wood and simply unearths and preserves it. Occasionally, he’ll use a 5-foot crosscut saw to pare down the wood but he doesn’t do any carving.

“I can’t compete with wood-carvers; Mother Nature can,” he said. “I’m fortunate enough to be able to recognize her work.”

At this point, he feels the collection — which is spread throughout his home in Seaside — is complete. He’ll often receive offers for various pieces but he doesn’t want to parcel them out.

“If I sell one piece, then it’s not a collection anymore,” he said.

His hope is to find a gallery, museum or other establishment that will host the entire collection. For now, he invites people to view it at his residence. They also can peruse the collection virtually and watch videos with descriptions of the sculptures at Thompson’s Facebook page, “Sculptured Ocean Wood Art.”

Katherine Lacaze is a contributor for Coast Weekend, The Astorian and Seaside Signal.