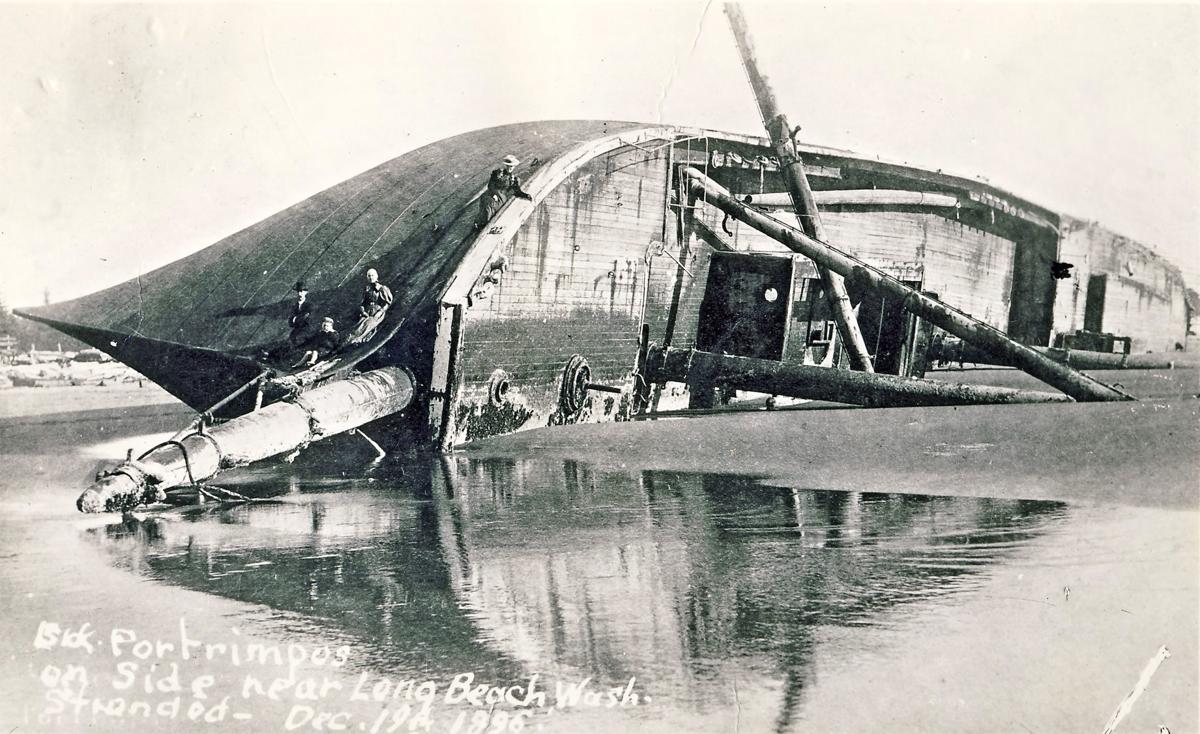 Parts of the Potrimpos were made into a desk for an early editor of the Chinook Observer, himself a shipwreck survivor who settled here. A significant part of this wreck may still lie under the sand. 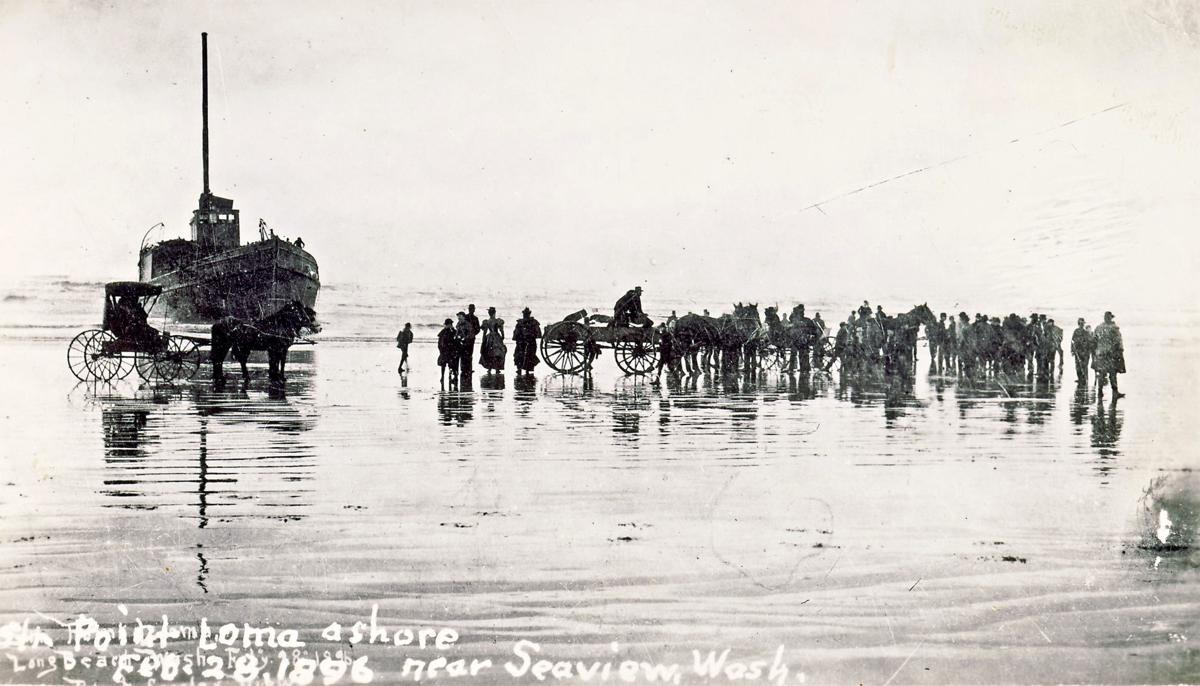 While most shipwrecks at the turn of the last century involved sail-powered vessels, the small steamship Point Loma’s propulsion system couldn’t save it from the sands of Seaview. 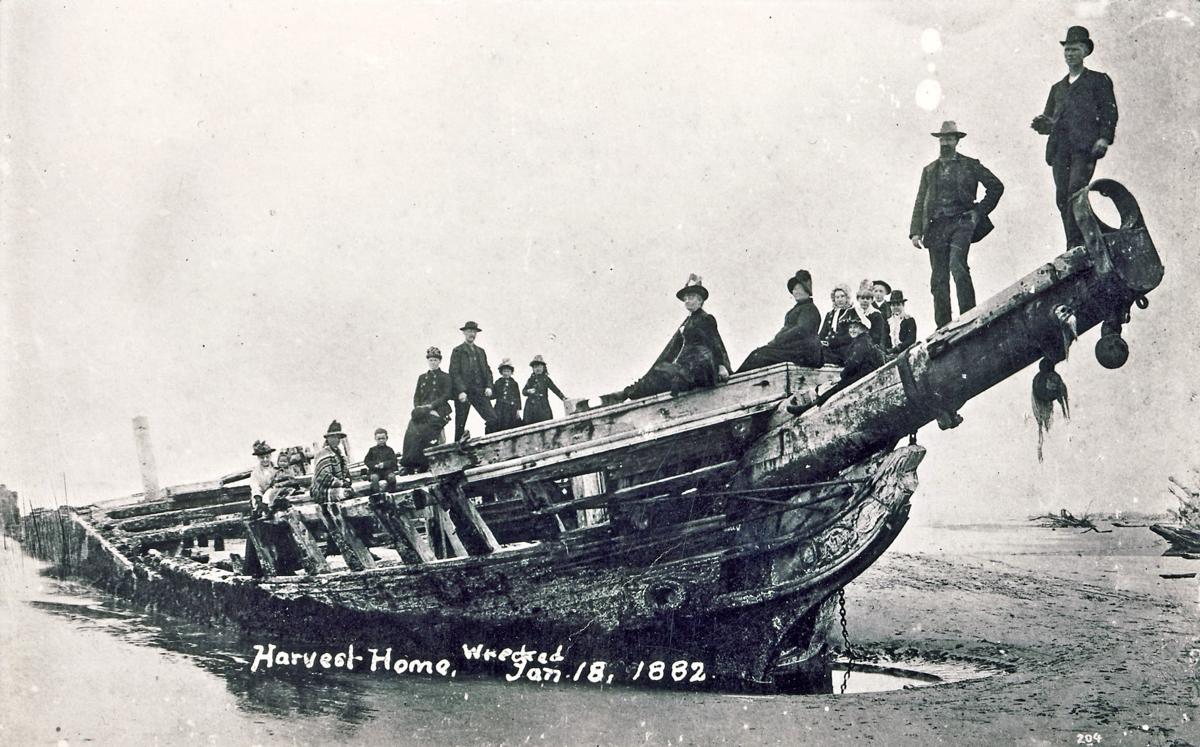 The picturesque wreck of the Harvest Home was blown up in 1923 in the service of a short-lived scheme to conduct car races on the beach. 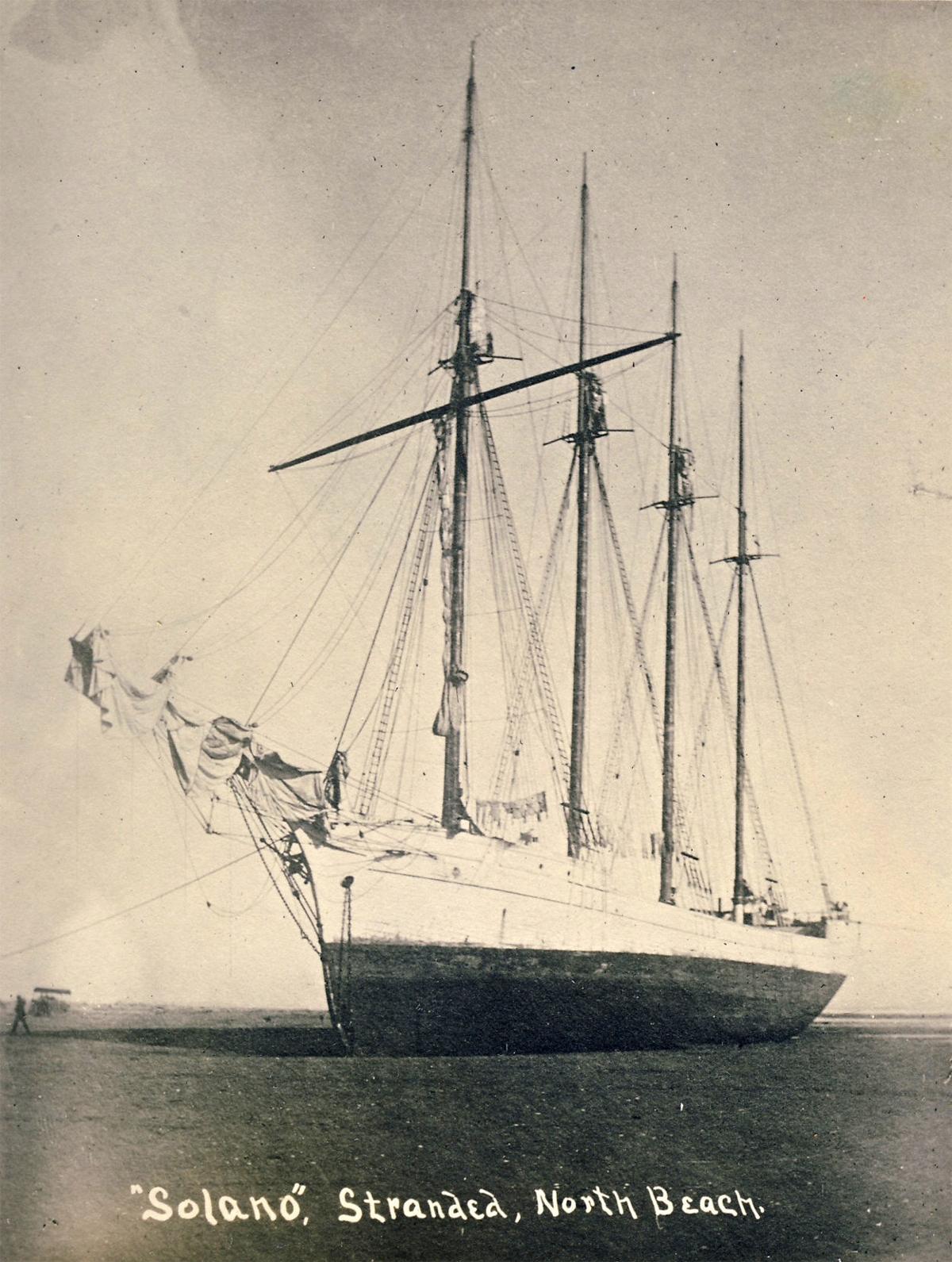 Despite being little damaged, the Solano couldn’t be salvaged and slid into oblivion. 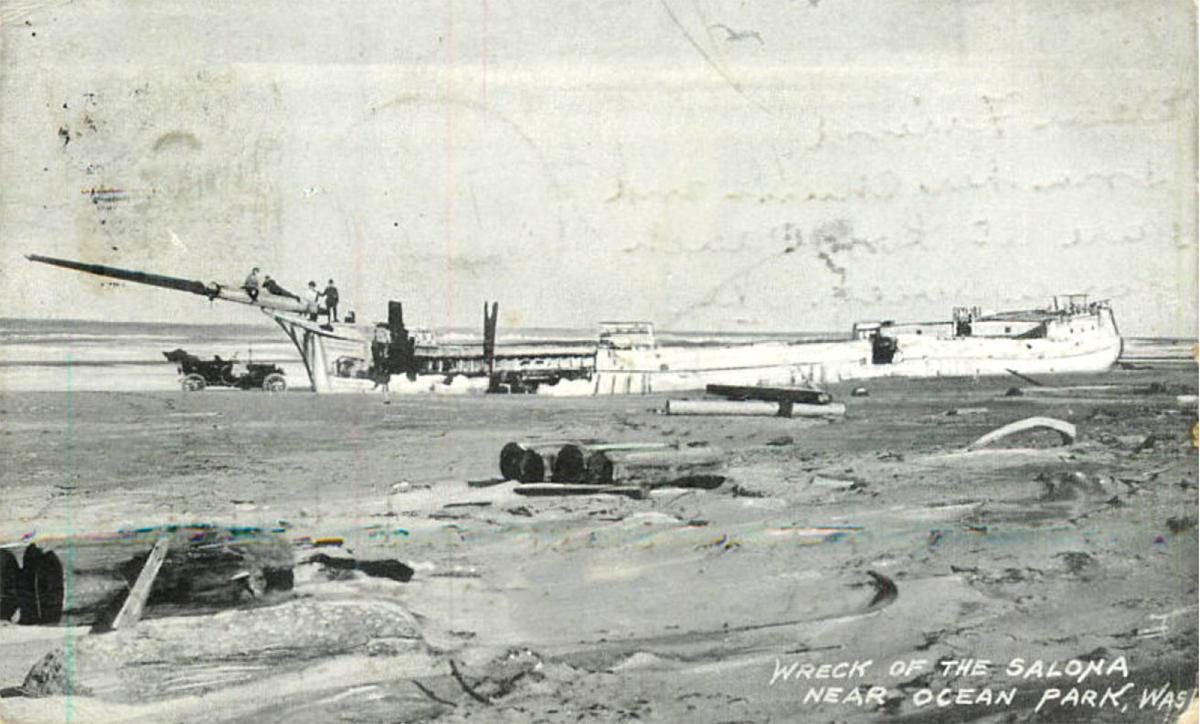 After wrecking in 1907, the Solano remained a tourist attraction for years and was promoted on this postcard mailed in 1912.

Parts of the Potrimpos were made into a desk for an early editor of the Chinook Observer, himself a shipwreck survivor who settled here. A significant part of this wreck may still lie under the sand.

While most shipwrecks at the turn of the last century involved sail-powered vessels, the small steamship Point Loma’s propulsion system couldn’t save it from the sands of Seaview.

The picturesque wreck of the Harvest Home was blown up in 1923 in the service of a short-lived scheme to conduct car races on the beach.

Despite being little damaged, the Solano couldn’t be salvaged and slid into oblivion.

After wrecking in 1907, the Solano remained a tourist attraction for years and was promoted on this postcard mailed in 1912.

In the 1880s, 1890s, and 1900s, the wheat harvest and timber crops of the region drew sailing ships, like big moths, to the mouth of the Columbia River. Some of those ships piled up on the sandy peninsula to the north. For a time there was an intriguing assembly of battered husks on what used to be called “Weather Beach.”

In those years, sailing ships were the ideal conveyances for bulk cargo to be moved long distances without the urgency of time. The winds were free fuel and there were plenty of deep-water sailors skilled in the art of sailing by wind.

Lumber shippers built multi-masted tall schooners precisely for the lumber trade. Not a few of the wheat fleet were new — the Potrimpos, for instance, was only 10 years old when she grounded here, and the Alice but eight.

They were all wind-driven vessels, except for the steamship Point Loma.

At least 14 of these ships wrecked in the months of predictable bad weather: five in January, three in February, one in March, one in July, two in October, two in November and three in December.

Eight of the vessels were inbound in ballast, lightly loaded and riding higher in the water, presenting a larger profile to the force of a hostile wind.

Not all vessels were well-designed or in good repair. Not all captains and crews were competent. Not all cargo or ballast was stably stowed.

Other reasons given for these wrecks included:

“…the error in calculating his latitude and longitude was ascribed by Captain Mattson to a fault in Tennet’s Nautical Almanac. Tennant acknowledged the mistake … owing to the curvature of the coast line north of the cape (Disappointment) the wreck could not be seen from the life-saving station (at Cape Disappointment) …” (Harvest Home);

“…The sea was very rough, and had washed away her (on-deck) houses and swept her decks of everything … heavy gales had blown away her sails and the helpless vessel was driven ashore, although all (her) anchors were thrown out.” (Grace Roberts);

“… the Captain’s chronometer was wrong …” (Strathblane);

“The heavy sea put out the fires in the boiler room and the vessel drifted onto the beach …” (Point Loma);

“At daybreak … (the captain) sighted land and was on the lookout for a pilot or tug, but the vessel soon became perfectly helpless and drifted towards shore. The captain ordered both anchors out. … The current, which sets in very strong all along the beach at certain stages of the tide, was too strong, and the ship drifted through the breakers and on to the beach …” (Potrimpos);

“The placing of one or more whistling buoys in the ocean abreast of North Beach might be of some assistance in preventing future disasters. There is a whistling buoy off the mouth of the Columbia, and a whistle on the Columbia River Lightship. The next whistling buoy is at the entrance of Willapa harbor. Some 26 miles of coast are thus unprovided with this means of warning ships in thick weather...” (Glenmorag).

The search for fixes

Endless waves battered those wrecks to pieces; iron rusted, wood rotted, shipworms chewed; sand floated aside, embracing heavy wreckage. Salvors and “seagulls” (locals who got to the wreck before the insurance man did) removed anything worth removing. Over the years, Weather Beach’s sands accreted many yards to the westward, covering, for example, the Frank W. Howe, whose timbers now anchor a shore pine forest in Seaview.

Maritime authorities became increasingly aware of the genuine danger presented by the north Pacific Ocean and its Columbia River Bar. Officials took ever more expensive and time-consuming steps throughout these years to mitigate the trouble:

• Purchasing Coston flares — brilliant pyrotechnic devices similar to highway safety flares — for use at night by patrolling surfmen to warn away vessels too close to shore;

• Development of an accurate, affordable marine chronometer so sea captains could determine their longitude;

• Increasing the accuracy of the “Coast Pilot” and similar almanacs about this region;

• Clarifying the offshore and inshore currents on marine charts;

• Building the North Head Lighthouse, visible from the north;

In those years, wreck remains contributed to summertime’s tourist life at the beach. In August 1885 the Morning Oregonian reported,

“Life at the seaside is now at its best… Many were compelled to sleep in Stout’s (Seaview) barn last night, owing to lack of accommodations. Over 300 people came down on the Lurline alone … fishing continues good. The other day a gentleman got over 80 crabs at the wreck of the Harvest Home … the weather continues warm, though not unpleasant. The nights are cool. Camp fires are all the rage in the evenings, and the passerby is greeted with selections from ‘Il Travatore,’ ‘Billee Taylor,’ gospel songs, negro melodies, etc., which combine to make an evening pass away very pleasantly.”

“With the Potrimpos, Glenmorag, Point Loma and Harvest Home all on exhibition, North Beach has a superior lot of attractions to offer summer visitors during the coming season.”

“With reports of 100 degrees in the shade and papers filled with accounts of the uncomfortable atmosphere of inland places, people at North Beach are congratulating themselves on being away from the interior and meet every train, confidently expectant of finding many friends, refugees from the stifling heat of cities … the beach this year offers a new attraction in the line of wrecks, the old Harvest Home and Patrimpus, which have lain on the ocean bed for so long, being now nearly covered up by the sand into which they are gradually sinking out of sight, being completely forgotten in the interesting sight of the Solano, a four-masted sailing vessel of San Francisco, which came ashore last winter and which is standing perfectly erect, imbedded in the sand, about four miles above Ocean Park. To the landsman, the ship seems in perfect condition, but the captain, who is living with his family on the wreck, realizes that a hard problem is before him to accomplish his task in again launching his vessel into the sea, which is his intention as soon as bad weather sets in and the tides are high enough…”

From the July 8, 1911, edition of Portland’s Oregon Journal:

“One of the many features of the (Fourth of July) celebration held at Ocean Park … was the automobile race from Ocean Park to the wreck Solano and return. The distance is eight miles and the cars raced nip and tuck the entire distance. E. P. Kendall at the wheel of his Selden finally nosed out his nearest competitor by about 10 feet. James Conway, at the wheel of a Thomas Flyer, was second. The time was 10-1/2 minutes.”

Sometimes the remains were remodeled into a particular memento:

“Associate Editor (Charles) Payne, of the Chinook Observer, received an interesting present last week in the shape of an historical desk. It is a useful and picturesque piece of office furniture made out of woods taken from the wrecks of the Harvest Home, Great Republic, Strathblane, Glenmorag, Point Loma and Potrimpos… Mr. Payne himself is a survivor of the Strathblane.” — Dec. 25, 1900, The Morning Astorian.

Salvage was a constant:

“A crew of men is at work wrecking the stranded vessel Potrimpos, which has been on the beach for over four years, all hopes of getting her off having been abandoned. The huge steel plates will be taken off carefully and there will be little use of explosives, as was done with the Glenmorag. The rigging and derrick used in wrecking the Glenmorag are being used on the Potrimpos.” — Jan. 31, 1901, Morning Oregonian.

“Thirty-six years ago today, March 19, 1896, the ship Glenmorag came ashore at the point just south of the Caoba (1925) hulk. It beached in a heavy fog while beating around outside the Columbia River. She was skippered by Captain Archibald Curry. His first mate was William Turnbull, who later married a sister of William Garretsen of Ocean Park. Another survivor of the wreck was William Begg, who was severely injured when a life-boat was smashed against the ship’s stern quarter by heavy seas. He married Maud Taylor of Ocean Park, and lives here today, having raised a fine family and established himself as one of the community’s leading citizens…” — March 18, 1932, North Beach Tribune (Ilwaco).

And, finally, an explanation for what happened to that stoutest of wrecks:

“Ancient North Beach Wreck Blasted to Clear Speedway. The last oaken bones of the bark Harvest Home, the oldest prominent ‘wreck-mark’ on the North Beach were last week blasted away from the sands of the shore on which the old wooden hull came aground on a bright moonlight night in the fall of (1882) … The protruding timbers of the old windjammer were an obstacle to the automobile races, the (auto racing) committee agreed, and were blown out to clear the speedway course. … The Harvest Home was (made) of heavy oaken timbers that withstood the breakers for these 45 years. The wreck was an object of sightseeing interest to the many beach visitors for nearly half a century.” — Aug. 3, 1923, Ilwaco Tribune.

Heather Douglas is a freelance writer, illustrator and educator.