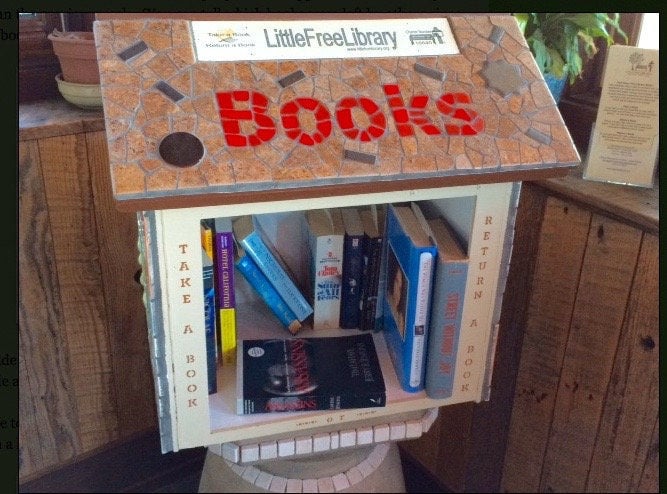 Need some vacation reading? McMenamins in Gearhart offers visitors an option with this Little Free Library. 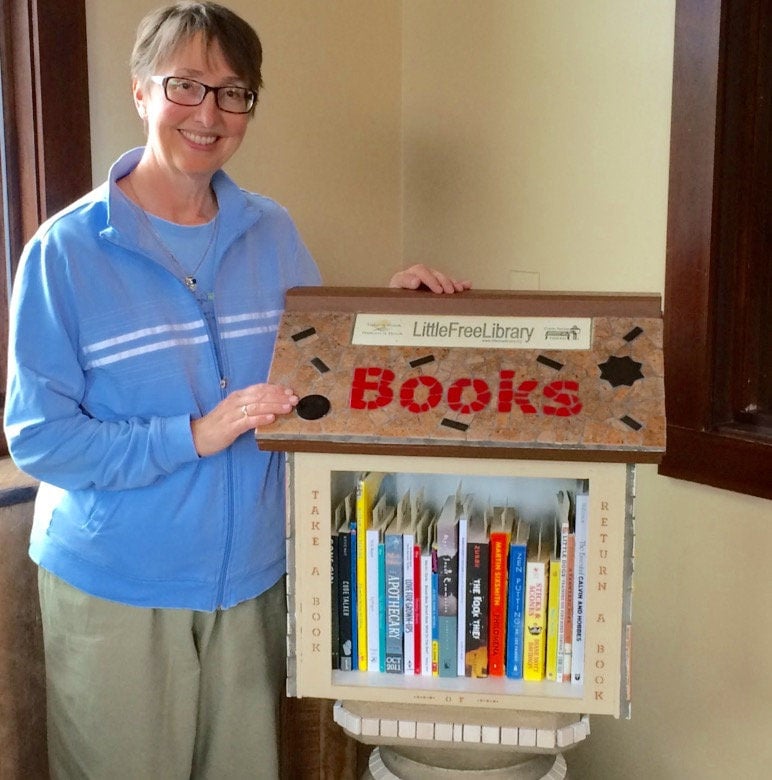 Beatrice “Bebe” Michel with her Little Free Library at McMenamins in Gearhart. 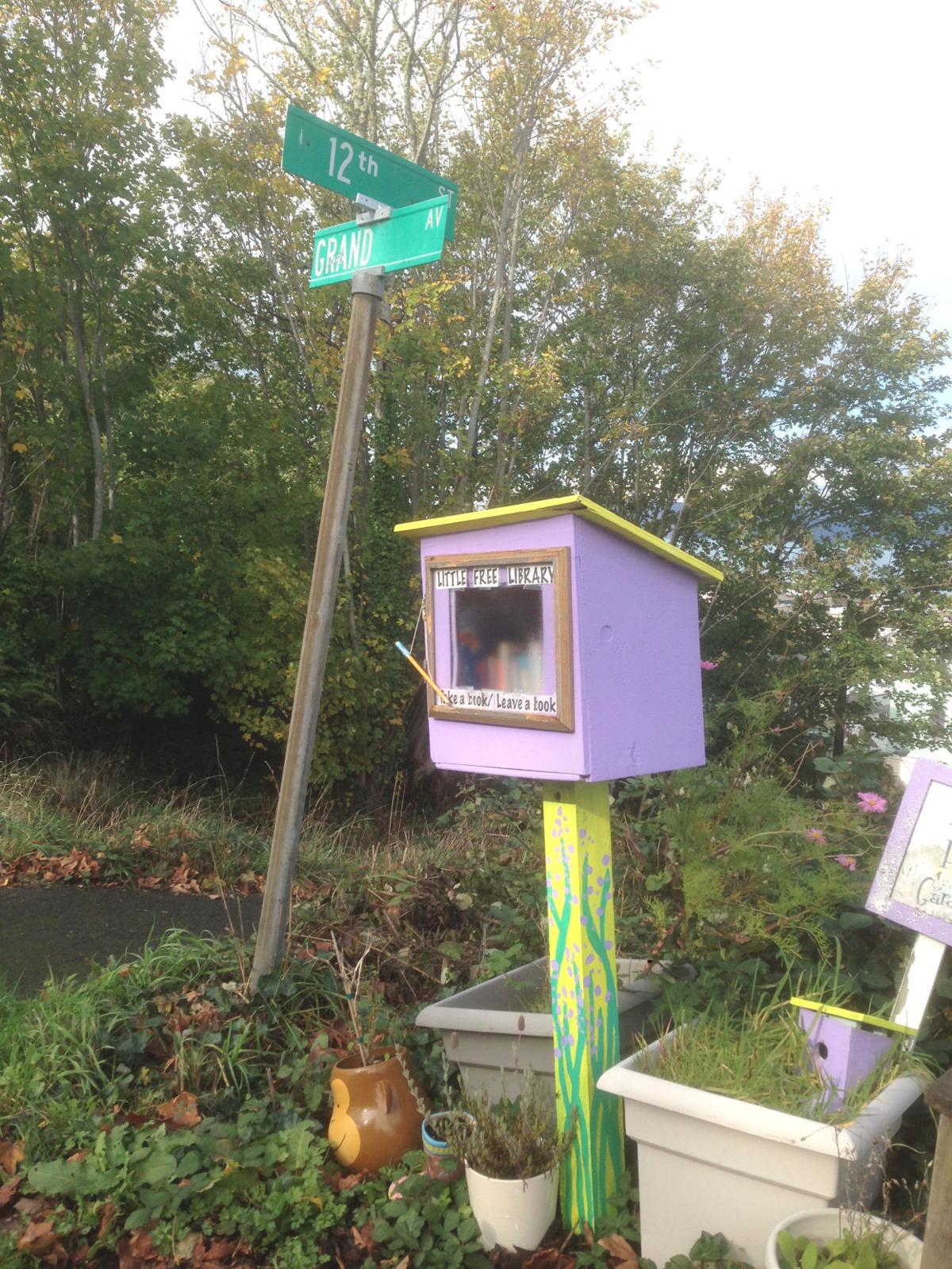 A Little Free Library in Astoria. Such libraries are springing up throughout the coast.

Need some vacation reading? McMenamins in Gearhart offers visitors an option with this Little Free Library.

Beatrice “Bebe” Michel with her Little Free Library at McMenamins in Gearhart.

A Little Free Library in Astoria. Such libraries are springing up throughout the coast.

Clatsop County’s main reading outreach program is challenging everyone in the area with time, a toolbox and a passion for literacy to design and construct their own “little free library.”

The initiative, inspired by a national program, will be capped by a Little Free Lending Library Build and Auction fundraiser in the spring. The libraries and the books on their shelves will be shared throughout county communities.

The standard size for the libraries is 12 inches deep, 22 inches wide and 22 inches tall. Fun and whimsical designs are encouraged, but the libraries must accommodate as many as 10 hardcover books standing 21 inches tall. In similar initiatives throughout the country, people have created libraries to resemble lighthouses, movie theaters, barns, phone booths and more.

Libraries Reading Outreach of Clatsop County, known as Libraries ROCC, is collecting the finished little libraries at Seaside Public Library through December. The donated libraries will be on display through January for viewing and voting for people’s choice awards. They will then be auctioned off during a fundraiser in February.

“This is your opportunity to get books in the hands of children,” Seaside Public Library Director Esther Moberg said.

Funds raised from the auction will go directly to Libraries ROCC, a nonprofit program that provides no-fee library cards and summer reading programs to youth up to age 19 in Clatsop County. The program is supported by the Seaside Public Library, the Astoria Public Library, the Warrenton Community Library and the county’s five school districts, along with several corporate sponsors, Clatsop County and the cities of Seaside, Astoria and Warrenton.

The Little Free Library movement, which started in 2009, is focused on spreading literacy and making community connections. It has grown over the years to involve about 32,000 book exchanges.

Although the movement is popular, there has not been a collective push to spread the movement in Clatsop County, which is why “we loved it,” Moberg said. Astoria Library Director Jane Tucker agreed it would make a good fundraiser because it gives people something to make and allows them to use their imagination and creativity.

“It seemed like something that would be fun,” she added.

Only three Little Free Libraries in Clatsop County are officially registered — one in Gearhart, one in Astoria and one in Knappa. Moberg said she believes there are about a dozen in the county, but not all are registered.

Readers are always invited to freely take a book of their choice, but trades are welcome. “The concept is sharing with your community,” Moberg said.

Participants can pick up official rule packets at the Warrenton, Astoria and Seaside public libraries. Moberg said it would be neat to see some libraries designed to mimic local icons, like the Tillamook Head Lighthouse, the Astoria Column or Fort Stevens. The libraries must have a closing door, or doors, on the front and an overhang to keep out rain and snow. The top three winners for the people’s choice awards will be placed and maintained in rural communities as part of Libraries ROCC. The rest will be auctioned off, and recipients can set up and operate their individual libraries.

Beatrice “Bebe” Michel, a Tillamook resident who is soon moving to Gearhart, is a fan of the Little Free Library movement.

“I liked the idea of being able to encourage reading and community in my own little corner of the world,” she said.

She followed the movement for several years, then tried her hand at the project. As a mosaic artist in her spare time, Michel wanted to “tackle a new substantial project,” so she put together a mosaic Little Free Library. She started the project in September 2014 and finished in June.

Because of the coastal weather, she wanted to place the library at a location that is safe and dry but accessible to the public. She chose the lobby of McMenamins’ Gearhart Hotel, where the library is available to anyone at any time.

The project was successful from the start — all the books were gone in one week. The hotel gets a lot of foot traffic, and many out-of-town visitors, so Michel does not expect the same rate of return as other neighborhood Little Free Libraries might see. However, she encourages people to remember the second part of the equation, which is giving back.

“Ideally, folks would get into the spirit of the thing and leave books that they enjoyed and would like others to enjoy as well,” she said. “If someone falls in love with a book and wants to keep it or pass it on to someone else directly, that is fine, too. Ultimately, I just want to promote the fun of reading.”

She emphasized the importance of a motivated person maintaining and restocking each library. Otherwise, “just like with anything, entropy can occur,” she said. However, collaboration is also an important part of the movement.

“It’s amazing how many people are excited to participate because they’re looking for places to donate their books,” she said.

Michel checks her Little Free Library weekly and restocks it with books from a stash she cultivates with donations from family, friends, staff and patients.

“I try to stock the library with a wide variety of books to appeal to readers young and old,” she said. “I put an informational bookmark explaining how the Little Free Library works in each of the books and there are usually a few new books that people have left for others.”

She encourages people to register their Little Free Library with the official organization at LittleFreeLibrary.org, so people know where to access them. Additionally, the organization has resources to help prevent some potential issues, such as vandalism and theft. Stewards of the little libraries should be cognizant of potential problems, but “you have to hope for the best,” as well, Michel said.

In addition to making more books accessible to people throughout the county, the project will raise funds for Libraries ROCC, which started in 2010 under the leadership of Tucker and former Seaside Library Director Reita Fackerell. The program’s network continually is growing. The Warrenton Public Library came on board in 2013. Recently, the cities of Astoria, Warrenton and Seaside each signed intergovernmental agreements to support the program and Clatsop County gave $5,000 in funding.

“We started with imagination and the will to see every child have access to literacy,” Tucker said.

Approximately a third of Clatsop County’s 37,474 residents live in 35 unincorporated communities without tax-supported public libraries. Of particular concern is nearly 3,000 youth, who live in unincorporated, rural areas, according to an annual report for Libraries ROCC.

Since the start of the program, the three libraries have issued 2,091 cards. The number peaked in its third year and steadily declined the following two years. However, the number of items circulated through Libraries ROCC increased from about 5,100 the first year to 21,114 in 2014-15. Also, program attendance is increasing over the years, from 2,740 in 2010-11 to 8,670 in 2014-15. Despite the positive signs, Moberg said she believes there are still a few out there who would use this service if they knew about it.

“It will be interesting to see what happens with more publicity,” she said.

In addition to providing library cards for kids, the outreach also provides courier services between the public libraries and schools with the help of the Northwest Regional Education Service District. For its first five years, the program received five grants from the Institute of Museum and Library Services through the Library Services and Technology Act and administered by the Oregon State Library, with the understanding the project would eventually become self-supporting. State funding stopped for fiscal year 2015-16, so the program is transitioning to be locally funded, according to Tucker and Moberg.

Program leaders did a mailing request and now are working on the Little Free Lending Library fundraiser. They also are seeking other grants, fundraising ideas and donors, Moberg and Tucker said. The funding goal for 2015-16 is $35,000 which will sustain the program at its current level.

The details for the little libraries auction event have not been finalized. The group is looking for more sponsors to support the event. Libraries ROCC also will be at Gifts That Make a Difference, Saturday, Dec. 12, from noon to 4 p.m. in the Liberty Theater’s McTavish Room. The holiday gifts fair is sponsored by the Astoria Kiwanis and Lower Columbia TimeBank.