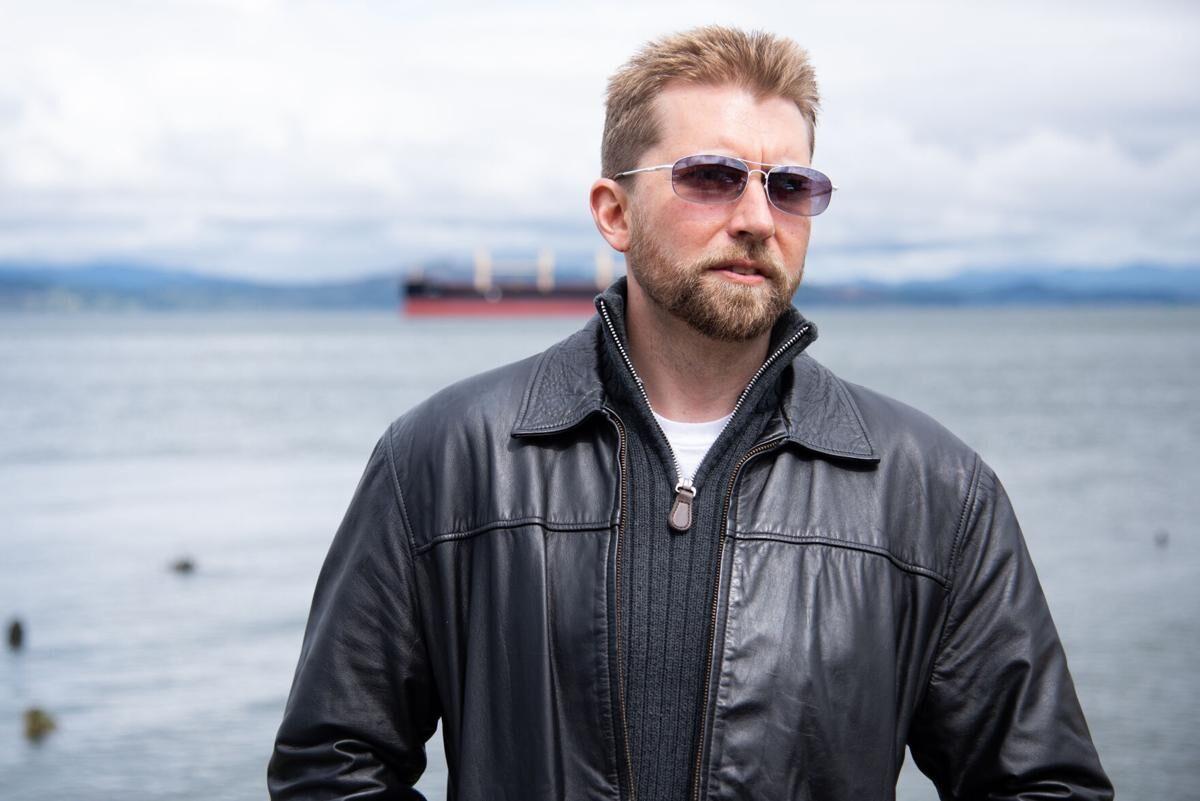 Luke Wirrkala stands on the bank of the Columbia River in Astoria. 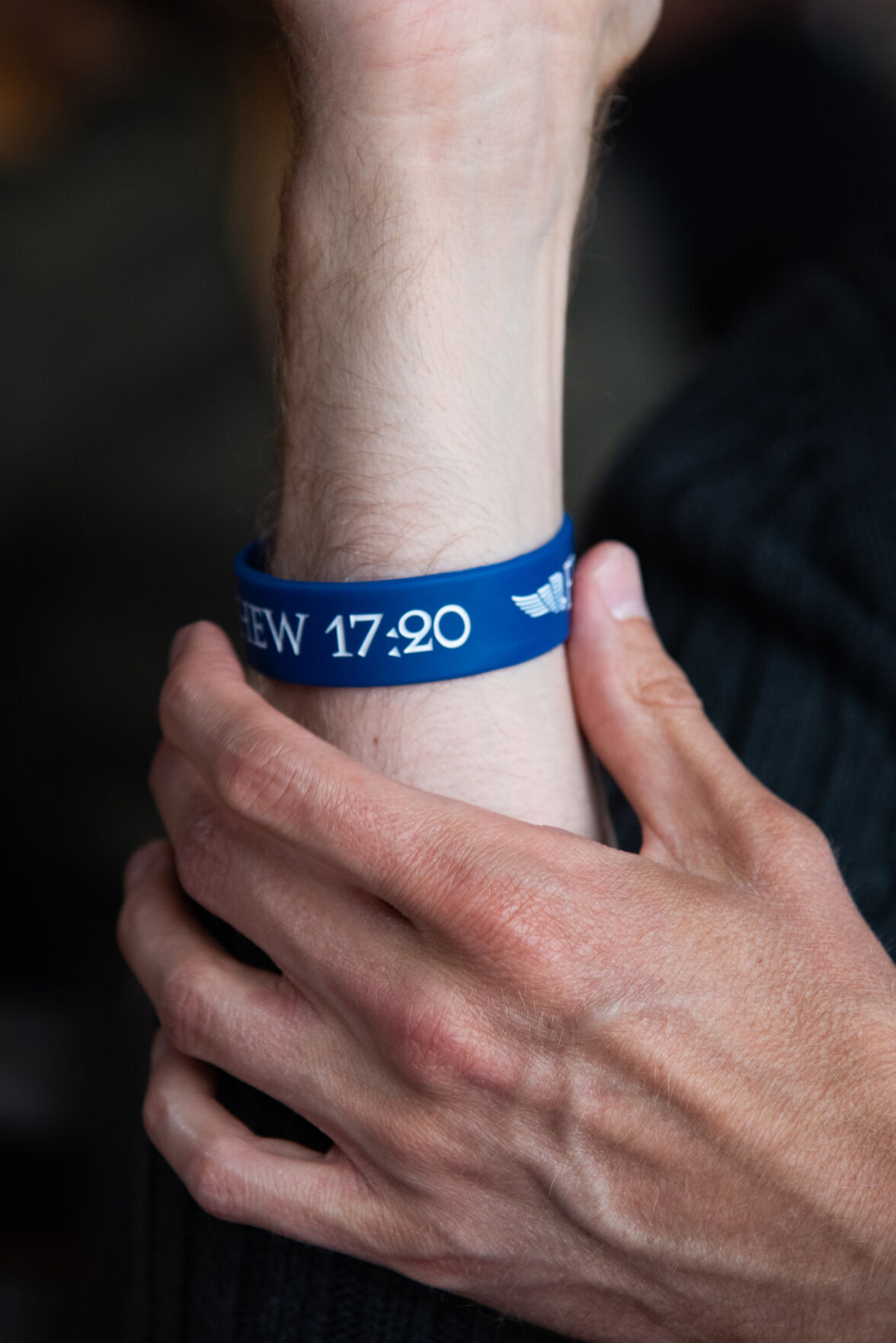 Luke Wirkkala wears a ‘Free Luke’ bracelet with a Bible verse from Matthew 17:20.

Luke Wirkkala was in only one fight in prison, sometime in early 2016, when he was two years into a life sentence for killing a man in Bend. He was attacked by his cellmate, a violent and unstable man who would sit on his bunk and laugh at nothing for hours.

One day, Wirkkala lost his patience and told the cellmate to keep quiet.

They fought viciously, exchanging wild swings and headbutts, crashing into the cell’s metal fixtures, until guards cracked open the door and sprayed both men with mace.

A coughing, blinded Wirkkala was marched to Snake River Correctional Institution’s bleak behavioral unit, where he would stay for 30 days.

After four days in isolation, he was given a shower. But the cold water reactivated the mace that had dried on his skin, searing his face, groin and other sensitive areas. It was some of the worst pain he had ever felt.

The water shut off suddenly, leaving Wirkkala to take stock of his life. He was a convicted murderer shackled to a prison shower, covered with soap, shaking uncontrollably, experiencing the sensations of freezing and burning at the same time, unsure if anyone was coming to get him.

“I really didn’t want to be alive at that moment,” Wirkkala recalled.

Wirkkala’s experience with the criminal justice system was certainly a rare one. He was tried twice for murder on essentially the same facts, but with two different outcomes: Guilty in 2014 for the death of his houseguest, David Andrew Ryder, 31, and not guilty in April after a retrial.

Wirkkala never disputed that on Feb. 4, 2013, he shot Ryder at close range with a pump-action shotgun after a long day of drinking together. But he was adamant he’d killed Ryder in self-defense after Ryder had sexually assaulted him.

When Wirkkala’s attorney argued that the original jury heard portions of a police interview after Wirkkala had invoked his right to an attorney, the Oregon Court of Appeals ordered a retrial in early 2018.

Most defendants who win an appeal opt for a plea deal or are again found guilty. But in this case, Wirkkala’s resolve paid off and he’s now back living on the coast, where the Ilwaco High School graduate grew up, eight years after his odyssey through the justice system began.

“I’m still trying to take it all in,” he said over tea at the Astoria Brewing Co. “I’m very easily overwhelmed these days.”

Wirkkala, now 40, has had a few beers since his acquittal, but drinking for him can’t be like it was before, especially if he returns to bartending as a side gig. He had drunk throughout the day of the shooting, a Super Bowl Sunday, starting with two glasses of white wine before the game. A forensic expert determined his blood alcohol level was between 0.18 and 0.38 when he killed Ryder.

“Basically, I was an alcoholic before,” Wirkkala said. “I don’t want to go back to that partying lifestyle. It takes over a person’s life. I know it caused me to set aside things in life I’d wanted to do.”

‘All the little things’

Freedom can be overwhelming, Wirkkala has learned. In the weeks since his release, he’s had to sweat out a driving test, find a replacement for his flip phone and an institution that will bank with a man with several expired IDs.

“It’s all the little things,” he said. “A lot of people probably don’t think about all the hoops you have to jump through to reenter society.”

Visiting a marijuana dispensary to purchase CBD was a bit surreal. But there’s plenty that’s stayed the same, like the calamari he likes to order at the Astoria Brewing Company. His cat, “Boots,” is still around at age 11.

Wirkkala is concerned with a short list of priorities, like fixing up a truck given to him by a cousin and completing the formal process of getting his record expunged. He’s looking for a place to live so he can move out of his parents’ house, where all his possessions have sat boxed up since the case began.

Along with sobriety, he hopes to continue with another good habit he practiced in lockup: writing.

Writing was a form of therapy for Wirkkala. The book he’s writing about his experience helped keep him sane while in prison in Ontario, though he paused that project after his transfer back to the Deschutes County jail for his retrial. He feared prosecutors might try to seize his notes as evidence.

The tentative title: “And then came the Storm.”

Justice is a theme in Wirkkala’s writings, and came at a high cost for him. Financially, he and his supporters paid more than a quarter million dollars in legal bills and other costs. Reputationally, his name will always be linked to the killing in Bend. The experience also cost him his marriage.

But perhaps most damaging of all was his loss of freedom. He spent eight years in custody.

As brutal as prison is, with its gangs and violence, it’s still preferable to life in the Deschutes County jail, he said. Paradoxically, there was a certain freedom to prison, he said. Prisoners are allowed to spend up to eight hours a day visiting in-person with their loved ones. They’re allowed to hold a job that earns them a small amount of income each month. At “Snake,” there was an outdoor track and a weight room to keep fit.

The jail, by contrast, is locked down like a supermax prison, Wirkkala said. From 2018 to 2021, while awaiting his second trial, Wirkkala spent 18 hours each day in a cell. Surrounded by steel and concrete, he rarely saw the sun.

Communicating with loved ones can be costly, he said. The telecommunications vendor for the Deschutes County Sheriff’s Office, Telmate, charges 25 cents to 50 cents per minute for calls. And as Wirkkala notes, it’s often the inmate’s family who pays, not the inmate.

Jail inmates are fed a carb-heavy diet of processed food, which might be fine for people locked up for 30 days, but not for a lengthy stay. Wirkkala said he felt his body start to deteriorate despite a commitment to keeping fit in his cell.

In his second stint in the jail, three inmates died of suicide. Wirkkala thought about killing himself every day, and each jail suicide added to his despair.

“When you’re locked in a concrete box 24/7, it’s not conducive to good mental health,” he said.

After his 2014 conviction, Wirkkala held out hope that if he successfully appealed, newly elected Deschutes County District Attorney John Hummel, a progressive and onetime defense attorney, would drop the charges.

“Well, unfortunately, that’s not what happened,” Wirkkala said. “He talks a good game, but when the rubber meets the road, I’ve found there’s not much there.”

Getting the truth heard

In his time out of custody, Wirkkala has also spoken to a number of reporters, something he wishes he would have done earlier.

After he lawyered up in 2013, he urged his two attorneys to release an official statement, to “get the truth out there,” so the news media wouldn’t just run with the prosecution’s account, he said. His lawyers advised against it, and when he got to trial in 2014, the jury was told repeatedly by prosecutors that he was a “storyteller” who had a year and a half to think up his explanation for killing Ryder.

“Look, I get it, lawyers are cautious by nature ... but if they had just put something out there, something basic, that whole argument could not have been made,” Wirkkala said. “A top-tier attorney should not be afraid to talk to the press. They should view the press as what it is: a tool that should be used. If you’re not using it, you’re not providing your client with the best possible defense.”

To Wirkkala, lawyering factored heavily into the outcome of both trials. He has an active bar complaint alleging misconduct against the prosecutors from his first trial, along with former Deschutes County District Attorney Patrick Flaherty. Wirkkala also has no love for Walter Todd, the lead lawyer in his first trial, whom he suspects thought he was guilty of at least manslaughter.

“He is largely responsible for me going to prison,” Wirkkala said.

Wirkkala wishes Todd had taken jury selection more seriously. In the first trial, the process lasted half a day. In the second, it stretched a day and a half, with jurors polled about issues close to the case, like firearm use in home defense and alcohol consumption.

“We just got so much more information about them, and I think we got a much better jury,” Wirkkala said.

For his part, Hummel said he reviewed Wirkkala’s case after taking office and determined a murder charge was appropriate.

He noted that 14 jurors in Deschutes County voted to convict Wirkkala over his two trials, while 10 supported acquittal.

“People sometimes misunderstand what an acquittal is,” Hummel said. “It’s an example of the system working.”

Wirkkala had a few dates lined up in the coming weeks, but his ex-wife seemed to weigh heavy on his mind. Since his release, they’d texted but hadn’t spoken to each other. He’d heard she’s dating someone else.

Wirkkala met Rachel Rasmussen in Astoria in 2011. He says he knew in short order it was a special relationship. In 2012, the couple moved from the cloud-shrouded coast to Bend and the promise of sunshine and opportunity.

Shortly after his conviction in 2014, Rasmussen visited him in jail, and he told her, “I was going to ask you to marry me,” meaning, had he been acquitted, as he’d expected, he would have proposed to her then and there.

She told him “of course” she would marry him.

She moved to be near the prison in Ontario and visited him four days a week, the maximum allowed. But sometime in 2018, she stopped taking his calls. He thinks she finally reached her “breaking point.” They divorced that year.

Rasmussen asked to not take part in this story.

As he recounted his experiences in the brewpub he wore a “Free Luke” bracelet and his wedding ring, accessories he wasn’t permitted as an inmate of the Deschutes County jail.

“It was pretty devastating to lose my wife while I was inside. She helped me survive this. She hung in there for five years,” he said. “Losing her was pretty heartbreaking. That just made it a lot lonelier for me. I’m still trying to figure it out myself.”

As his second trial approached, Wirkkala wasn’t sure if Rasmussen would testify again. But in March, she traveled to Bend and was called as a witness for the defense. She told jurors she was grateful to her ex-husband for defending their household that fateful night, which Wirkkala thinks was crucial for the jury to hear.

Following her testimony, she passed him at the defense table and they locked eyes for the first time in years.

His head tracked her movement the whole way she retook her seat.

“I’m trying not to think about her too much,” he said.