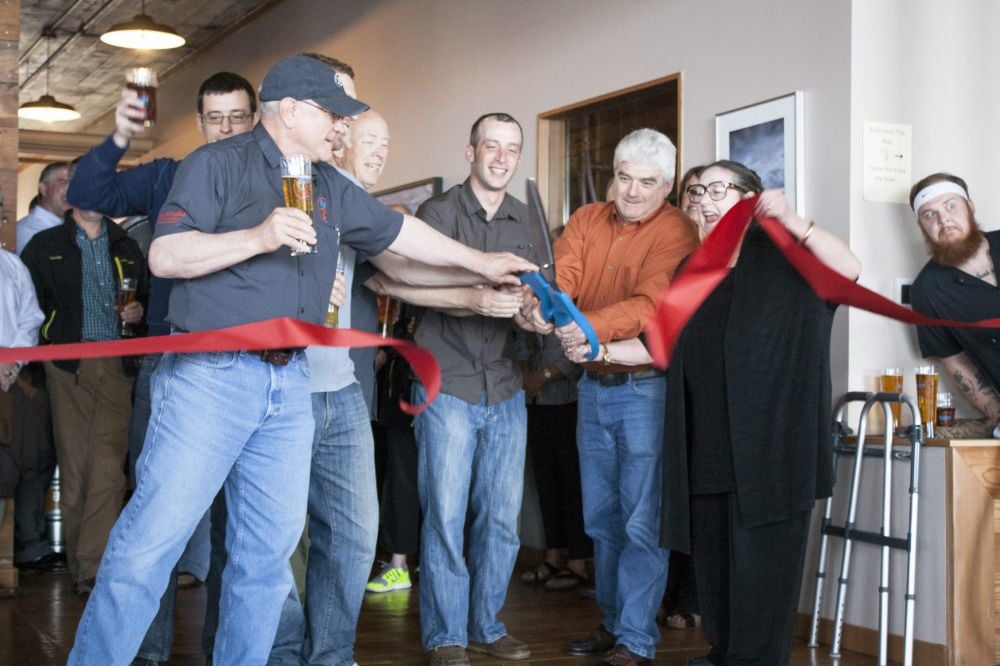 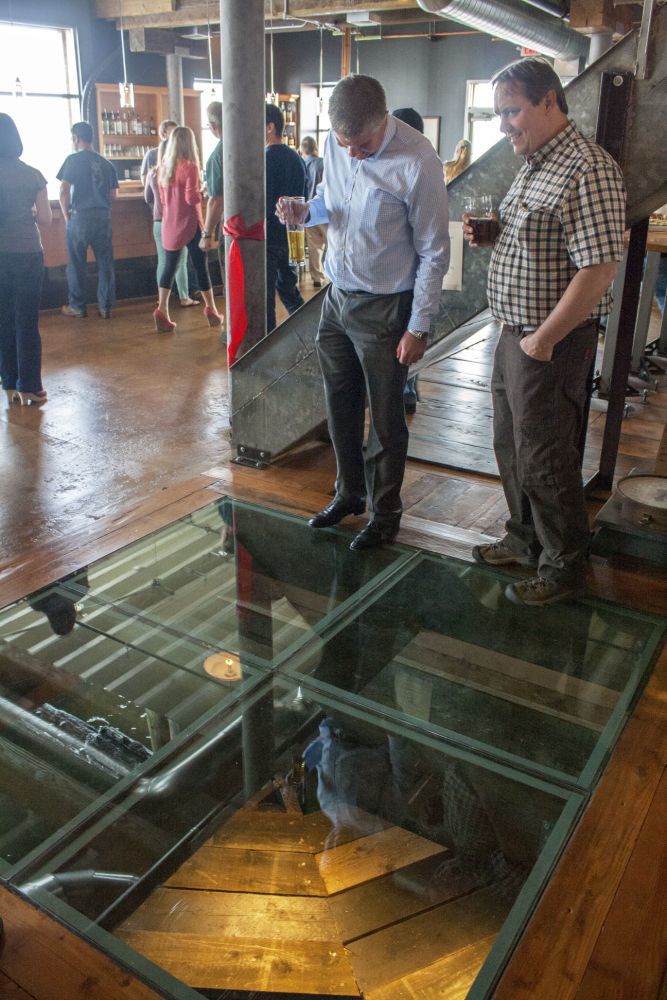 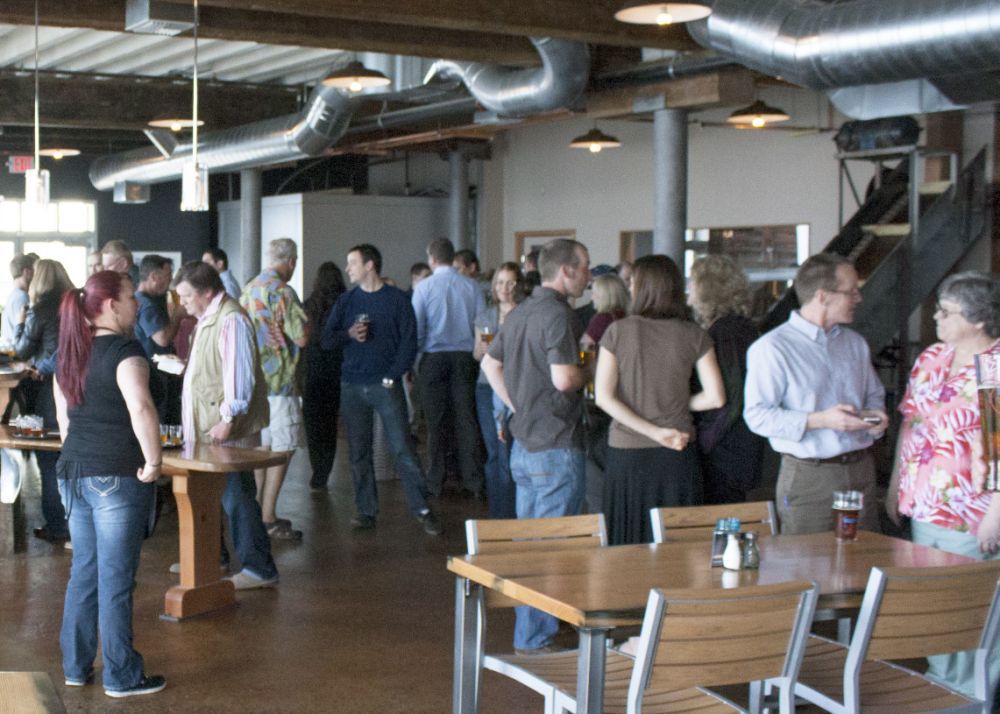 <p>A long list of community notables plied the stained and epoxied cement floors of Buoy Beer's new resaurant Thursday. Rickenbach Construction cannibalized the building during renovation, using its own wood for everything from tables and doors to counters and floors.</p> 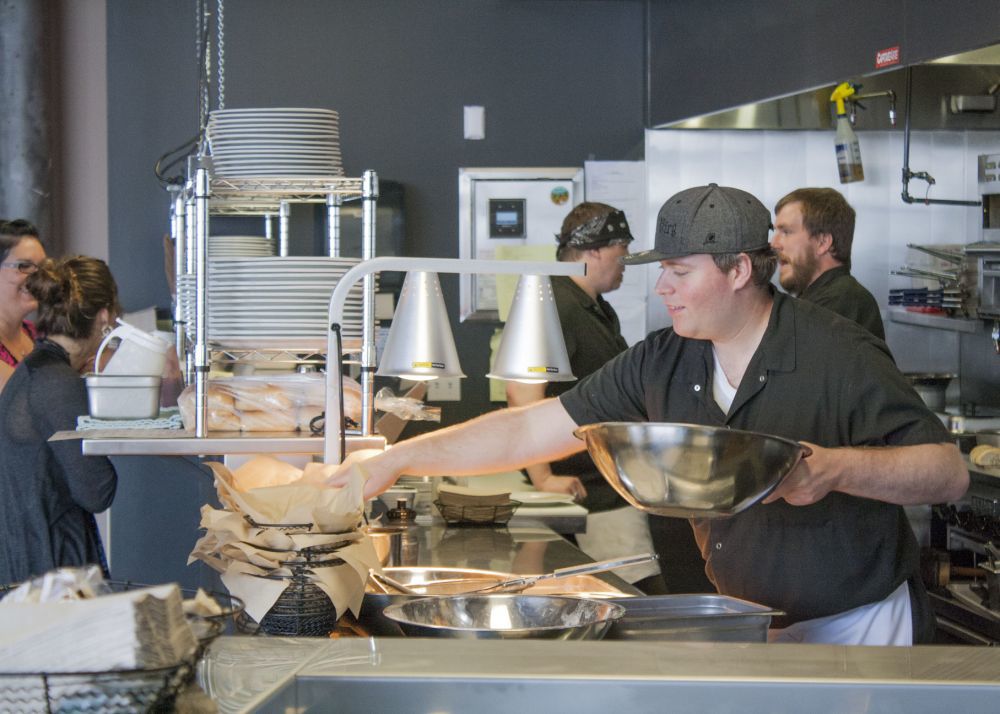 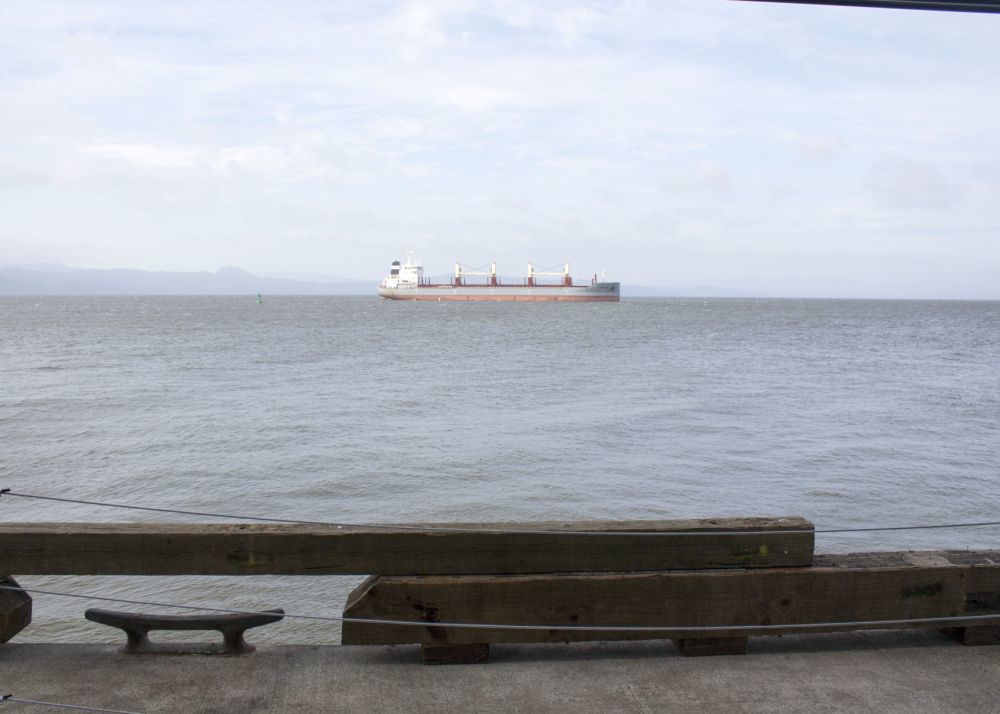 <p>The view from Buoy Beer, located in the former Bornstein Cannery along the Columbia River, is hard to beat.</p>

<p>A long list of community notables plied the stained and epoxied cement floors of Buoy Beer's new resaurant Thursday. Rickenbach Construction cannibalized the building during renovation, using its own wood for everything from tables and doors to counters and floors.</p>

<p>The view from Buoy Beer, located in the former Bornstein Cannery along the Columbia River, is hard to beat.</p>

State Sen. Betsy Johnson put aside her walker in the wood-paneled entrance to Buoy Beer Thursday evening in front of a crowd of onlookers. She brandished a large pair if scissors with Astoria Mayor Willis Van Dusen and several co-founders.

Together, they cut the ribbon on an operation that opened three months ago on the Astoria Riverwalk, just launched a new restaurant and has so far created 34 jobs.

Helping them with the scissors were members of Buoy Beers founding team, which includes:

 Luke Colvin, owner of Arbor Care Tree Specialists and the originator of the brewery idea;

 His brother-in-law and General Manager Dave Kroening, whos worked sales and marketing for Molson Coors and other startups;

 Dan Hamilton, a home brewer and the influence behind many of the recipes;

 Jerry Kasinger, a financial adviser for the business;

 Bornstein Seafoods co-owner Andrew Bornstein, one of about 20 local investors in the company;

 Kevin Shaw, who left as head brewer at Bridgeport Brewery to take the same position at Buoy Beer.

I leveraged the relationships I created over the last 10 years, said Colvin about using his business contacts to gather partners and about 20 local investors to start the brewery strong.

In March, Colvin won an entrepreneurship award from Clatsop Economic Development Resources for his efforts with Arbor Care and Buoy Beer  thats in addition to a George Award in 2009. He sees Buoy Beer as his way to have a larger economic impact on the region through manufacturing and exporting Astorian beer.

Over a decade of running Arbor Care Tree Specialists has created five quality, full-time jobs, he said. Buoy Beer now employs 34 people, and it only occupies a quarter of its building.

Located at 1 Eighth St. next to the Astoria Riverfront Trolley tracks, Buoy Beer took shelter in the white and yellow former Bornstein Cannery, which the seafood company is in the process of securing in a collateral swap with the Port of Astoria.

Buoy Beer hired Rickenbach Construction of Astoria as the general contractor. Rickenbach in turn added 10 to 15 local subcontractors. Together, with a team he estimated at between 100 and 150 people for the renovation, they cannibalized the building from an abandoned cannery into a stylish brewery, tap room and restaurant.

We actually only bought a couple pieces of trim off the shelf for the entire project, said Rickenbach co-owner Jared Rickenbach. He took wood from other parts of he building  he cut a large rectangular hole out of the floor where the main brewery tanks went in  and made it into tables, doors, benches, trimming and even new floors.

Noticing a portion of the floor just inside the entrance was rotting, he jokingly suggested creating a glass window through which to watch sea lions on the pilings below. Sea lion watching has since taken a serious edge at Buoy Beer. Double-layered, half-inch thick tempered glass allows visitors to stand on air while looking down on a miniature sea lion haul-out. The glass holds 120 pounds per square foot, he added, more than the cement floor around it.

We recycled just about everything in this building, said Special Ops Wally Makela, who was brought in with a recommendation after building Hamiltons house in Seaside. He helped install the iconic fish ladder just inside the restaurant, set up the brewery and install countless other features.

Estimates range past $2 million in costs, so far, and the brewerys only getting started.

Colvin said the base of Buoy Beers operation will be in mass production and export throughout the region. The brewery has an agreement with Clatsop Distributing of Warrenton, which markets and delivers their beers.

Its not a trial basis, said owner Ron Williams. Its a matter of getting them the beer.

So far, its on tap in Astoria at Clementes and T. Pauls Supper Club; Doogers in Warrenton; Sams Seaside Cafe and The Relief Pitcher in Seaside; The Lost Roo in Long Beach, Wash.; and the San Dune Pub in Manzanita, among other locations. Williams said theres the potential to get on tap at 175 to 200 locations throughout his coverage area in Clatsop, Tillamook, Pacific and Wahkiakum counties.