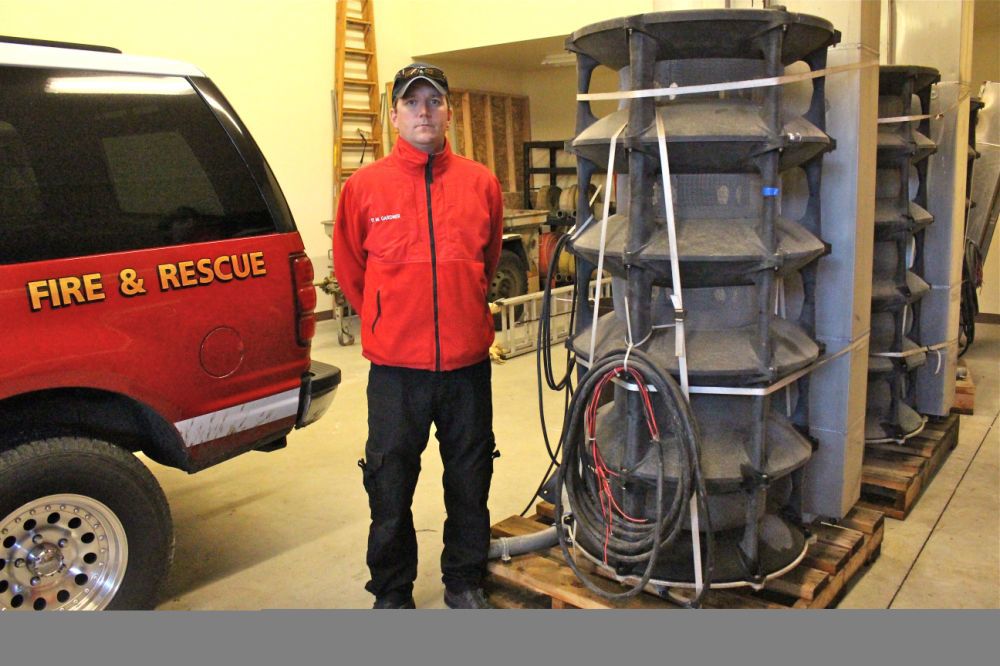 <p>Matt Gardner, training officer and fire marshall with Cannon Beach Fire and Rescue, stands next to recently acquired speakers that may be used for spare parts as the old speakers around town wear out.</p> 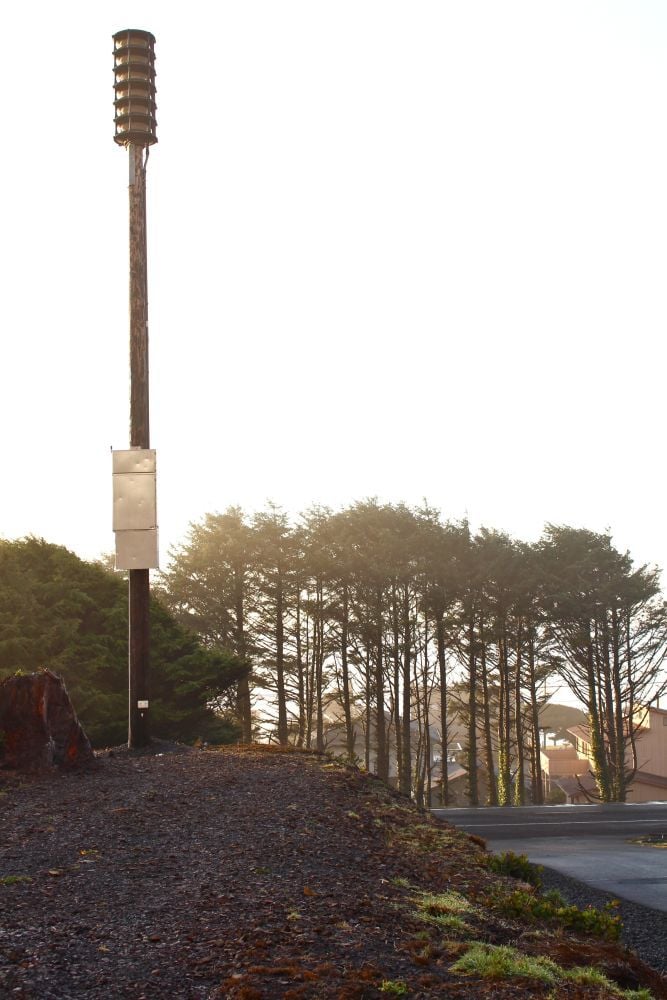 <p>The five-speaker siren tower outside the Arch Cape fire station is one of six scheduled to be tested at 11 a.m. Wednesday.</p> 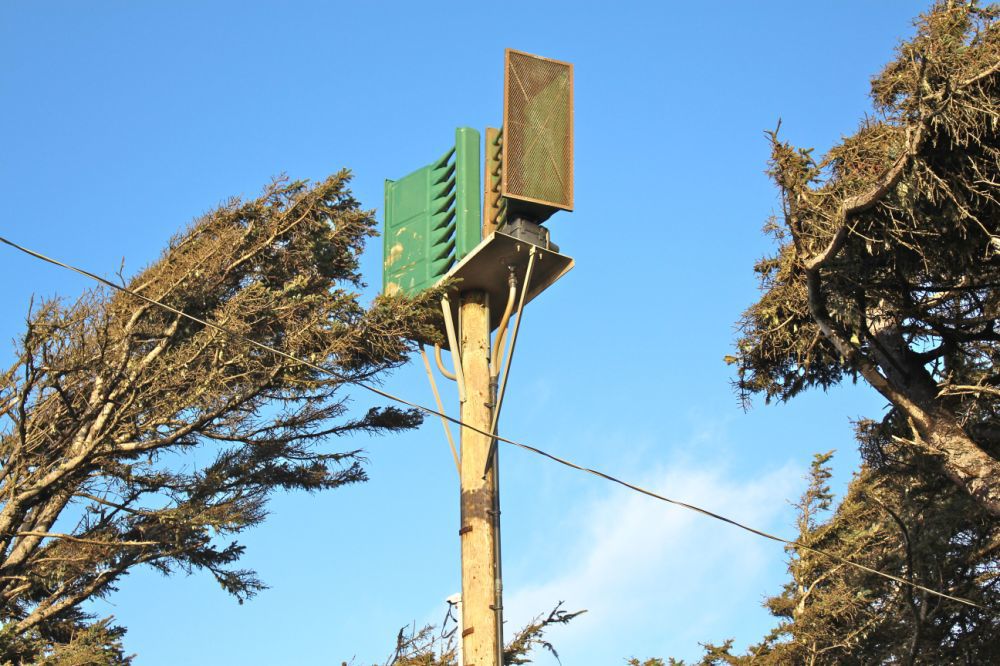 <p>The siren tower near the intersection of Washington Street and Ocean Avenue in Cannon Beach is one of six scheduled to wail out a test warning at 11 a.m. Wednesday.</p>

<p>Matt Gardner, training officer and fire marshall with Cannon Beach Fire and Rescue, stands next to recently acquired speakers that may be used for spare parts as the old speakers around town wear out.</p>

<p>The five-speaker siren tower outside the Arch Cape fire station is one of six scheduled to be tested at 11 a.m. Wednesday.</p>

<p>The siren tower near the intersection of Washington Street and Ocean Avenue in Cannon Beach is one of six scheduled to wail out a test warning at 11 a.m. Wednesday.</p>

CANNON BEACH  Dont panic. It is just a test.

At 11 a.m. Wednesday, Cannon Beach residents and visitors will be ear-witnesses to a rare occurrence: a testing of the citys actual tsunami warning siren.

Next, Gary Smith, a retired fire captain and current board member of the Cannon Beach Rural Fire Protection District, will recite a message to the effect of, Attention residents: The following will be a test of the tsunami siren and emergency evacuation system. Please do not call 911. This will be a test only.

Then the siren itself will wail for three minutes.

This will be followed by recorded evacuation instructions urging everyone within earshot to leave the beach and oceanfront properties, and head for high ground at least 80 feet above sea level. The recording will play three times at 30-second intervals.

The voice will belong to fire district board President Alfred Aya, the developer of the fire districts community warning system. Long ago, Aya recorded the mooing cow sounds heard during the systems routine monthly test on the first Wednesday of each month.

Then three more air horn blasts will be heard.

Finally, Smith will come on the radio for the last time to tell everyone that the test is over  and that if they ever hear the siren again, it may be because a tsunami is headed their way.

So far, the district has tested all the components of the new system  the radio contacts, the communication between the six siren towers and the main hub, and the monthly test known to the community as the cows.

The one area that has yet to be tested, which is arguably the most important, is the siren itself, Gardner said. Its the only way we can really know if that portion of the upgrade works.

The estimated tape-to-computer conversion cost, coupled with relocating a siren tower in Arch Cape, was $42,000, financed with district funds. The annual budgeted maintenance fees for the entire tsunami warning system is set at $3,000 per year.

The upgrade is the towns latest in a long history of tsunami-preparedness measures undertaken to minimize the loss of life during such an emergency.

The North Coast lies directly within the Cascadia Subduction Zone, which stretches from Canadas Northern Vancouver Island to Northern California.

Geologists and tsunami experts believe theres a 10 to 15 percent chance that a subduction zone earthquake of 9.0 or higher will strike within the next 50 years. The violent quake will be followed 20 to 25 minutes later by a tsunami that is liable to inundate Cannon Beach and surrounding communities, quickly killing hundreds of people.

The fire district set off the analog siren during the Japanese earthquake and tsunami in March 2011, though that event had a negligible impact on the North Coast.

The original warning system was installed in 1986 and went online in 1988.

It has long been known that Cannon Beach is vulnerable to tsunami-style events.

In 1964, the city was hit by a tsunami triggered by a 9.2 magnitude earthquake off the Alaskan coast, creating 27-foot waves that flooded the Pacific Northwest coastline, according to the Cannon Beach History Center and Museum.

Each of those three tsunamis could have killed people caught without warning on the beach, Aya said in an email.

Theres a good reason why the tsunami siren isnt tested regularly: We never do the siren sounds because of the chaos that it creates, Smith said.

There is also the danger of crying wolf: If locals became accustomed to hearing the siren, they may not take it seriously when it counts.

This is why the fire district is choosing to test the new system in mid-January, the slowest time of year for visitors coming to Cannon Beach. In addition, many of the citys second-home owners are likely to be away.

The fire district hopes to minimize the number of confused calls made to the fire department, the police department and the city.

The six siren towers  strategically placed from downtown at First and Larch streets to the Arch Cape fire station  are not designed to be heard throughout the entire fire district, only in the low-lying flood-prone areas. A person who lives in Haystack Heights may not be able to hear the sirens at all.

But, Smith warned, If youre standing underneath them, you have to cover your ears. Theyre loud.

The testing of the sirens is intended as a one-time-only event.

Once we know that this system is going to work when we push the button, we should be set to go for many years into the future, as long as we keep the system maintained, Smith said.

Anyone who listens to the test is encouraged to give feedback afterward by calling the fire department at 503-436-2949.