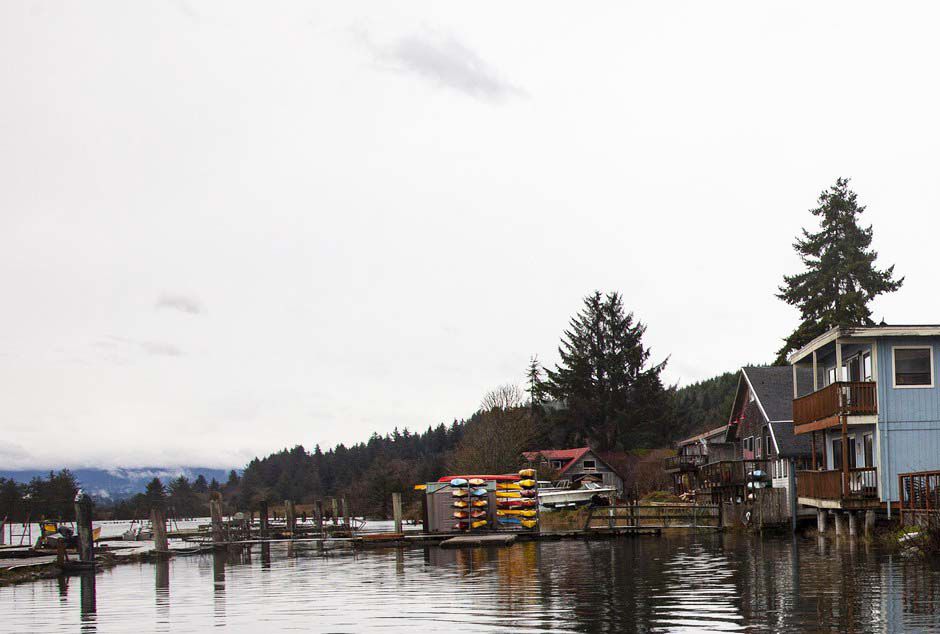 The Wheeler Marina used to flood a few times a year, until the shop owner raised the building 4 feet. Now, water laps at the retaining wall. 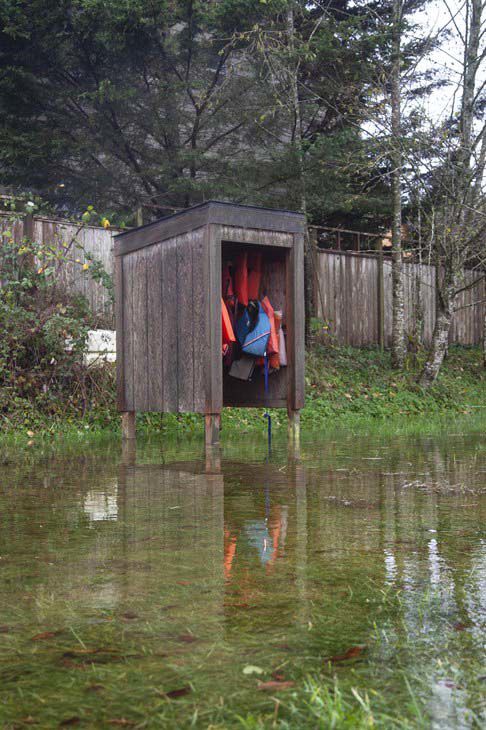 A cabinet of life jackets, free for visitors to borrow, is surrounded by water during a king tide in Nehalem.

The Wheeler Marina used to flood a few times a year, until the shop owner raised the building 4 feet. Now, water laps at the retaining wall.

A cabinet of life jackets, free for visitors to borrow, is surrounded by water during a king tide in Nehalem.

Scientists agree that sea levels are rising. The question is: How much and how fast? That’s an important question for communities along the Oregon Coast.

For marina owner Jim Nielson, occasional floods are the price you pay for shorefront property.

His shop, the Wheeler Marina, sits in an estuary where the Nehalem River opens into the eponymous bay. It’s sheltered from Pacific waves by a narrow spit of sand dunes. Stacks of colorful kayaks border the dirt parking lot. An aging black Lab greets visitors’ pets before escorting them up the stairs to the boat rental and tackle shop, which takes up the second floor of the old wooden building.

Nielson has owned and operated the shop with his wife, Margie, for 40 years. He thinks it’s the most low-lying property in Wheeler, and for a long time, flooding was a way of life.

“The wife and I would get out of bed, put on our waders, and start our day,” he said.

After a particularly devastating flood hit the region, the couple used money provided by the Federal Emergency Management Agency to raise their building by 4 feet. Now it doesn’t flood anymore. But in the coming decades, that might change.

Human-produced greenhouse gases like carbon dioxide are wrapping the earth in a heat-trapping blanket, causing the earth — and its oceans — to warm. And scientists agree that it’s making sea levels rise. The question is: How much is it going to rise, and how fast?

That’s an important question for communities along the Oregon Coast. Many areas along the rocky, mountainous coastline are too steep or landslide-prone to develop, so many of the places where towns rose up were in marshy estuaries, where roads and buildings sit just a few feet above sea level. It’s not uncommon to encounter flooding during particularly high tides called king tides, even when the water level in the river is low.

Richard Alley is a geoscientist at Pennsylvania State University. He studies glaciology, melting ice sheets, abrupt climate change and sea level rise. Alley said that in the best-case scenario, if humans stopped emitting greenhouse gases today, we’d still probably see global sea levels rise by an average of about a foot by the end of the century.

“It’s already baked in,” Alley said. That’s because the earth has already warmed by 1.5 degrees Fahrenheit.

And even if we seriously curbed our greenhouse gas emissions today, it would take a while to cool back down. In the meantime, ocean water would keep expanding (warm water takes up more space than cold water) and mountain glaciers, the Greenland ice sheet and Antarctic ice sheets would keep melting.

And that’s the best-case scenario. The worst-case one? The most recent report from a United Nations climate change panel predicts about 3 feet of total rise by 2100. But the International Panel on Climate Change report’s conclusions were produced by consensus, with hundreds of scientists and policymakers taking part. So it’s inherently a cautious report that has historically underestimated future levels of melt and sea level rise. Alley said that number could be much, much larger, possibly as high as 15 feet.

In places like Wheeler, communities have different ways to respond to climate change and sea rise. They can become part of a global effort to mitigate it and its effects, by reducing greenhouse gas emissions. They can respond locally by raising houses and strengthening shorelines. Or they can relocate.

And while it makes intuitive sense to plan for the worst-case scenario, moving can be expensive. In the U.S. alone, 3.2 feet of sea level rise could displace 4 million people. Add on a few extra inches, and the number skyrockets.

Most of those people live in major metropolitan areas, many of which have rolled out complex climate change preparedness plans. But in Oregon, most coastal towns are small and have very little money, and there’s very little research on how climate change will impact individual towns.

“(San Francisco) Bay Area counties can get together and pass bonds and develop funding, and perform research on the issue,” said Peter Ruggiero, a geologist at Oregon State University and the interim director of the Oregon Climate Change Institute. “In rural coastal communities, that’s not going to happen. Right now, any preparedness is done by individual businesses and homeowners.”

Ruggiero wants to help communities figure out what mitigation strategies are right for them, whether that’s placing large boulders on beaches to protect dunes from erosion, building levees, rehabilitating estuaries, which can act like sponges and absorb floodwaters, or relocating.

He worked with Tillamook County and other scientists on the Tillamook County Coastal Futures Project to help model the impacts of climate change on local towns, which includes Nehalem and Wheeler, and to help them plan for mitigation. He said that some communities, like Tillamook, are very proactive and better funded. Others don’t think about it much.

Figuring out how climate change might impact any particular part of the coast is very difficult, said Ruggiero. It’s due in part to how geologically active the Northwest is. Near the mouth of the Columbia River and along the southern Oregon Coast, sea levels actually appear to be declining because tectonic plates are pushing up against each other, making parts of the Northwest slowly gain elevation.

But it’s a temporary respite. In a few decades, Ruggiero warned, the sea level will be rising faster than the land. “In almost every projection, at some point, the entire Oregon Coast becomes submerged.”

It’s hard to get communities concerned about potential flooding a century away, especially when some don’t believe climate change is happening. Sea level rise is slow, and that makes it hard to see. And a few inches of sea level rise pale in comparison to the dramatic floods that regularly bury cities in Tillamook County under several feet of water.

“The problem is that the disasters almost always look primarily like a weather event,” Alley said, referencing hurricanes Katrina and Sandy. “And the background sea level rise is not all that noticeable until you bring a king tide or a giant storm on top of it. And then it’s higher than it ever was before.”

Jesse Jones, who works for the Oregon Shores Conservation Coalition, is trying to make sea level rise more visible in Oregon. She works with the Oregon Coastal Management Program to help communities adjust to climate change. She’s also involved with the Oregon King Tides Project. The project is trying to raise awareness of sea level rise along the Oregon Coast by encouraging volunteers to get out and take pictures of extreme high tides. Those extreme high tides provide a glimpse into the future, she said. “They’re the regular high tides of tomorrow.”

Nov. 26 was a king tide. Even though there had been little rain the week before, the boat ramp in Nehalem flooded into a parking lot. A cabinet of life jackets that boaters could borrow for children was surrounded by water.

Rick Hampton parked his old white pickup truck in the boat launch parking lot, camera in hand. Hampton is a longtime resident of Nehalem. It’s just a few miles north of Wheeler and is built on the same estuary.

Unlike Wheeler, which butts up against the mountains, much of Nehalem is built on a flood plain. “I’ve seen the flood in ’91, I’ve seen the flood in ’96, 2001 and 2007,” Hampton said. In 1996, he was up knocking on his neighbors’ doors, making sure they were awake and wading through hip-deep water to help them move their valuables to high ground.

Every king tide, Hampton goes down to the Nehalem boat ramp to take pictures for the King Tides Project. He gestured out the window of his truck to the shops around him. “In 2007 a lot of these stores had riverfront property. So I’ve always been interested in rising waters and how that affects the locals.” He said that a few times a year, the end of the road he lives on goes underwater.

“There’s a house down there, and I don’t remember how many years ago it was, but the very first year that house was here we had a good flood that came across the road, and it literally had his whole first floor underwater,” Hampton recalled.

Those floods weren’t caused by sea level rise. Most floods in Tillamook County happen when high tides meet heavy rains coming off the mountains. When the flooding rivers hit the swollen estuaries they slow and back up, causing extreme floods.

When king tides and high rivers do make Nehalem flood, city maintenance specialist Brian Moore is there, putting out cones and redirecting traffic.

Moore wasn’t working for the city during the legendary flood of ’96, but he sees signs of it everywhere. There’s a mark on the wall of his office, about 3 feet off the ground. “That’s where the water came up to, in ‘96.”

Like many people on the coast, Moore isn’t quite sure if he believes sea level rise is happening, or if it’ll be that bad or happen that fast. But he agrees that if it happens, it’ll be bad for communities like Nehalem.

“If you’re talking about a flood on top of a big 3-foot sea level rise like you’re saying, well, you can elevate buildings. But they’ve already been elevated,” Moore said.

And if sea level rise causes worse floods, Moore says most towns would be on their own. “Usually the Red Cross or some of the local churches will chip in. FEMA if you’re bad enough, but dealing with them can be a headache. But really it’s the local community, we all help out.”

Neilson agreed, “I suppose there would be the Red Cross and all that. But really we just take care of it ourselves, any mess that gets made. It’s just something we’ve been doing for many years.”

For now, Nielson said that coastal towns are resilient. “You unplug your freezers and try to elevate them and tie down the ice box,” he said.

And once the waters recede you clean up, and wait for the next one, and hope it isn’t worse.