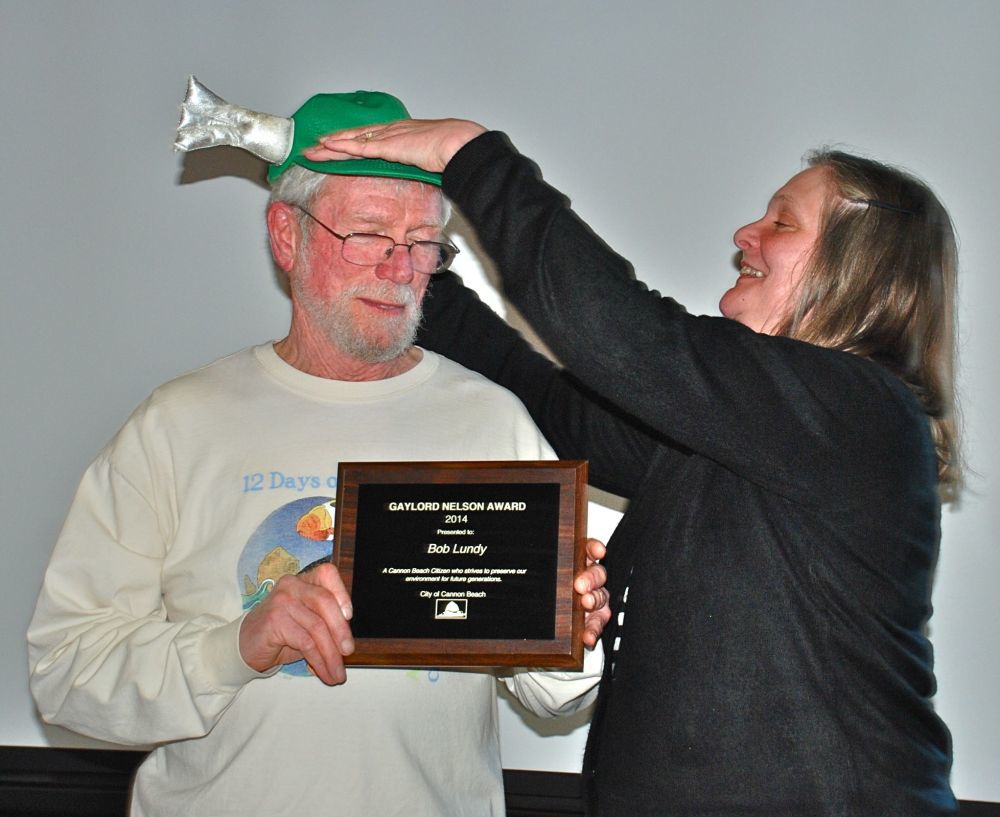 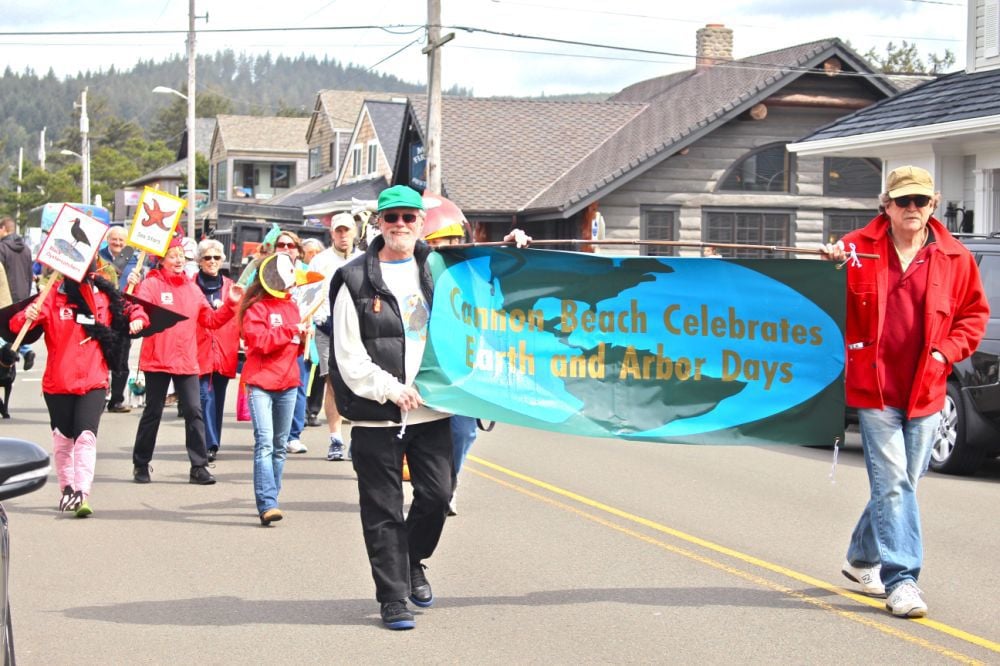 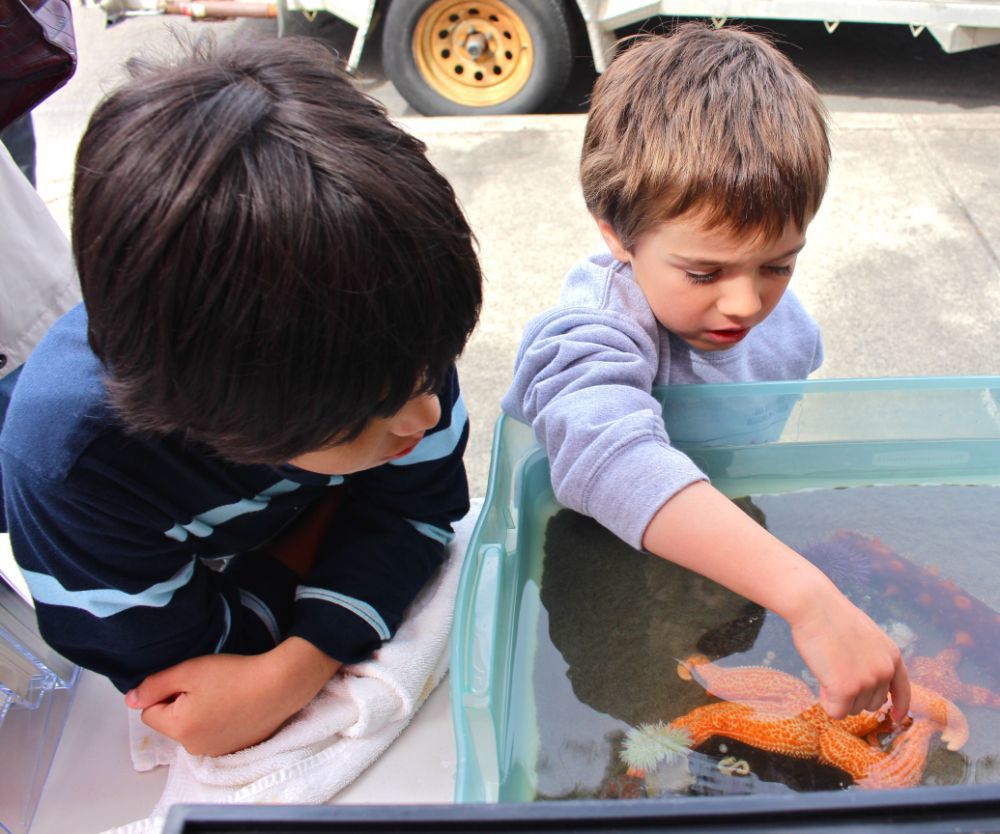 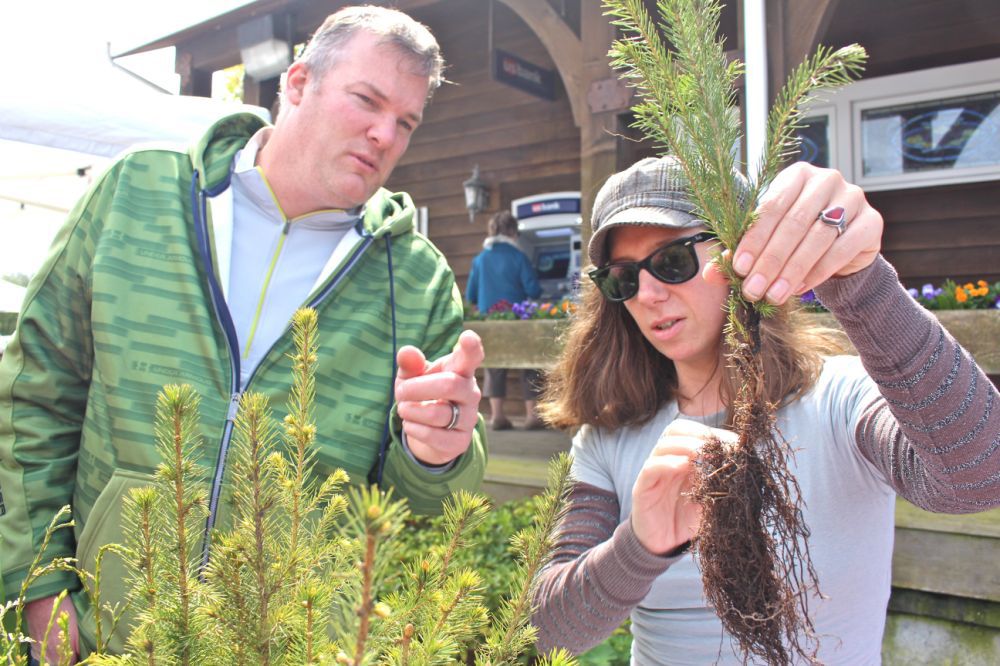 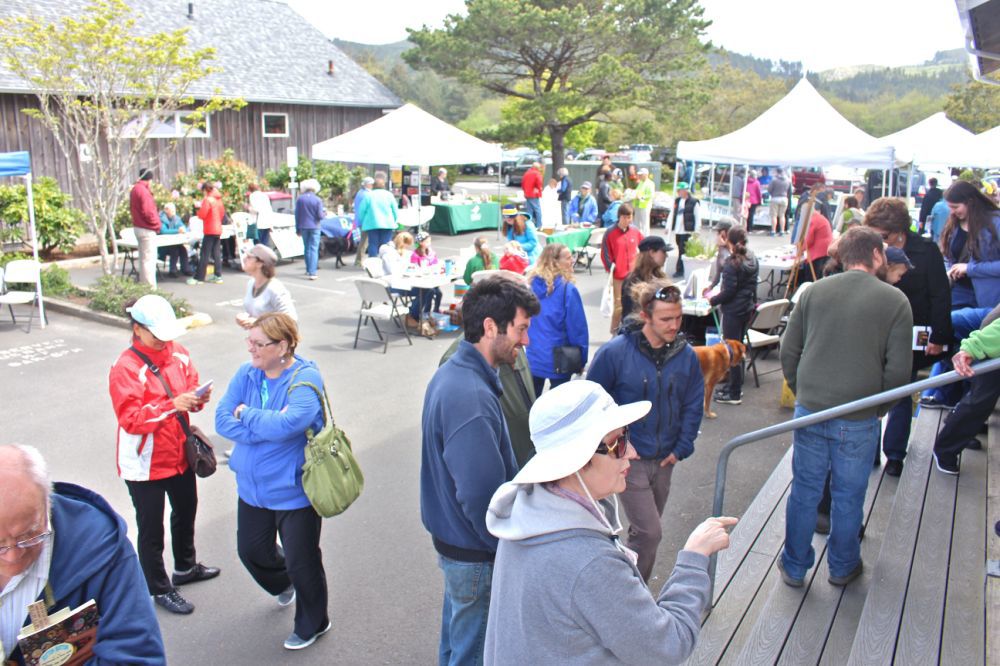 <p>The downtown street fair boasted about 20 booths, including the Haystack Rock Awareness Program, the Ecola Creek Watershed Council and the Wildlife Center of the North Coast.</p> 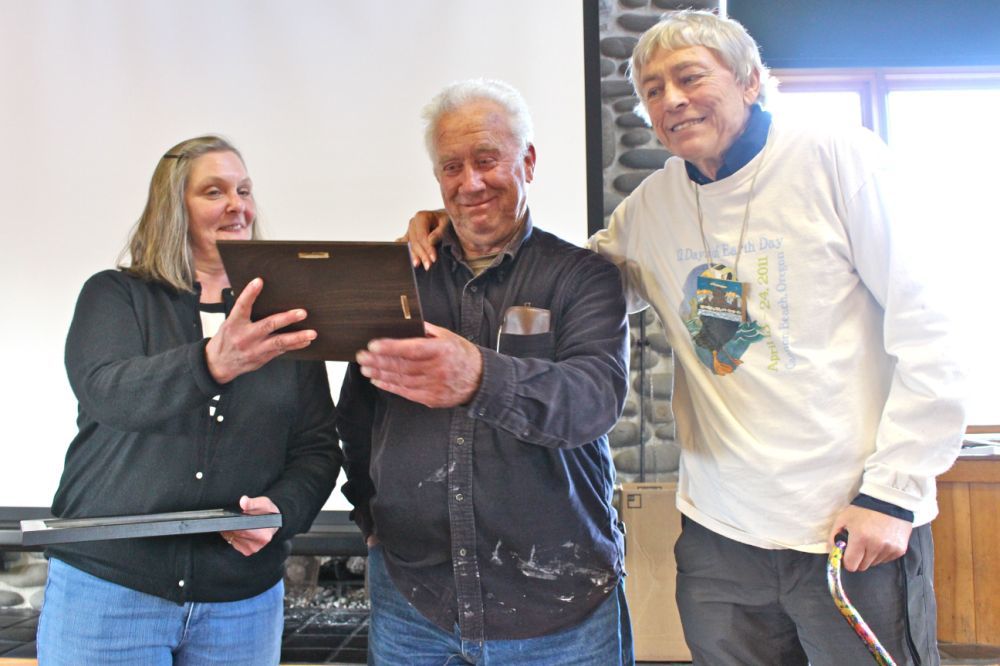 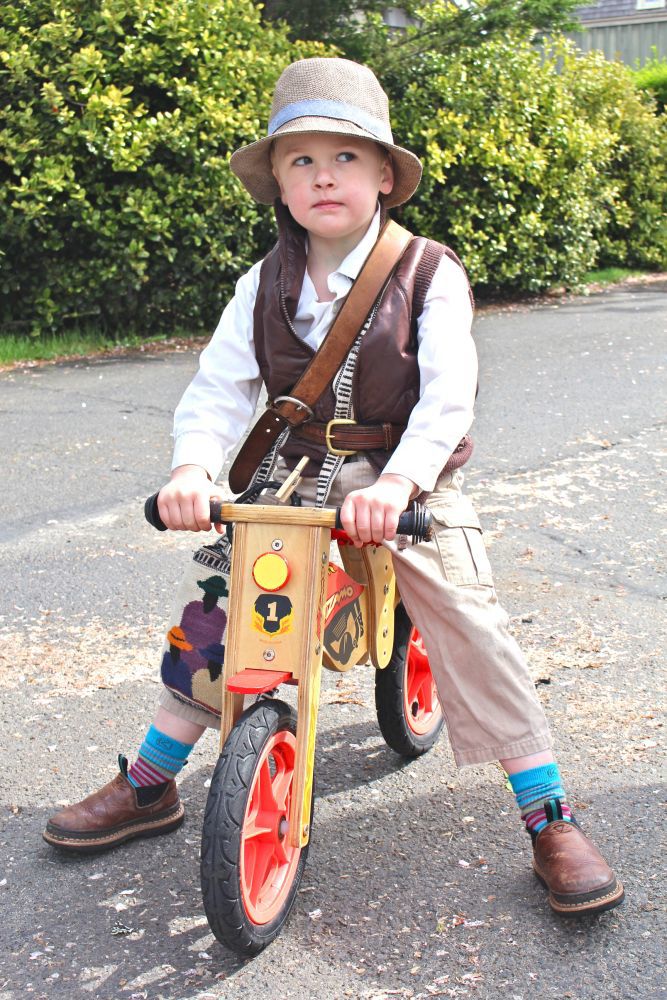 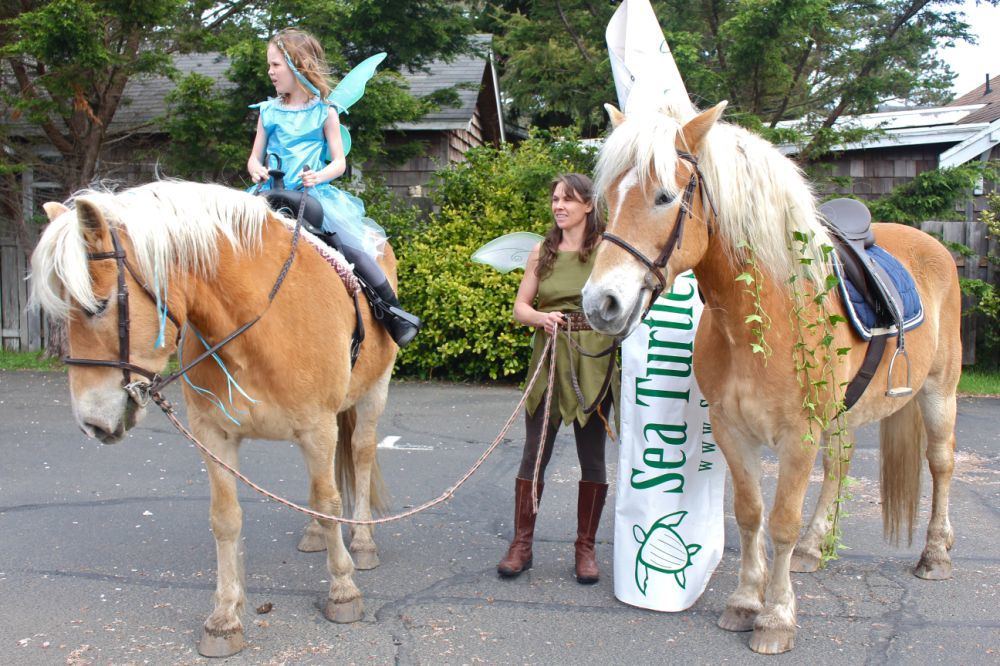 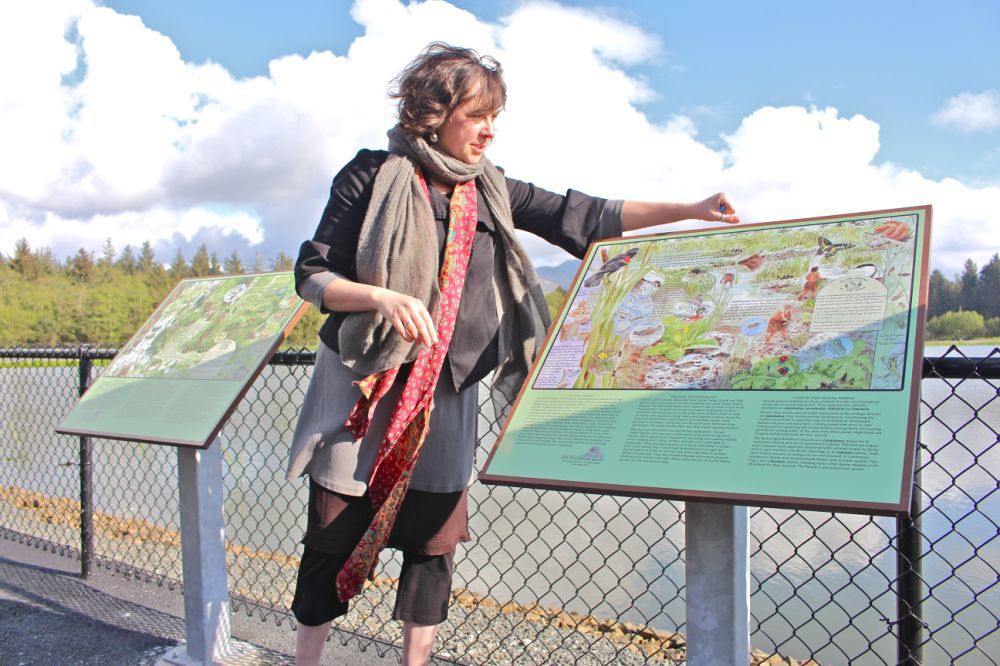 <p>Artist Sally Lackaff peels the tape off of her sign "The Native Wetlands," one of nine new interpretive signs she painted for the Cannon Beach Nature Trail. The signs were roughly two years in the making.</p> 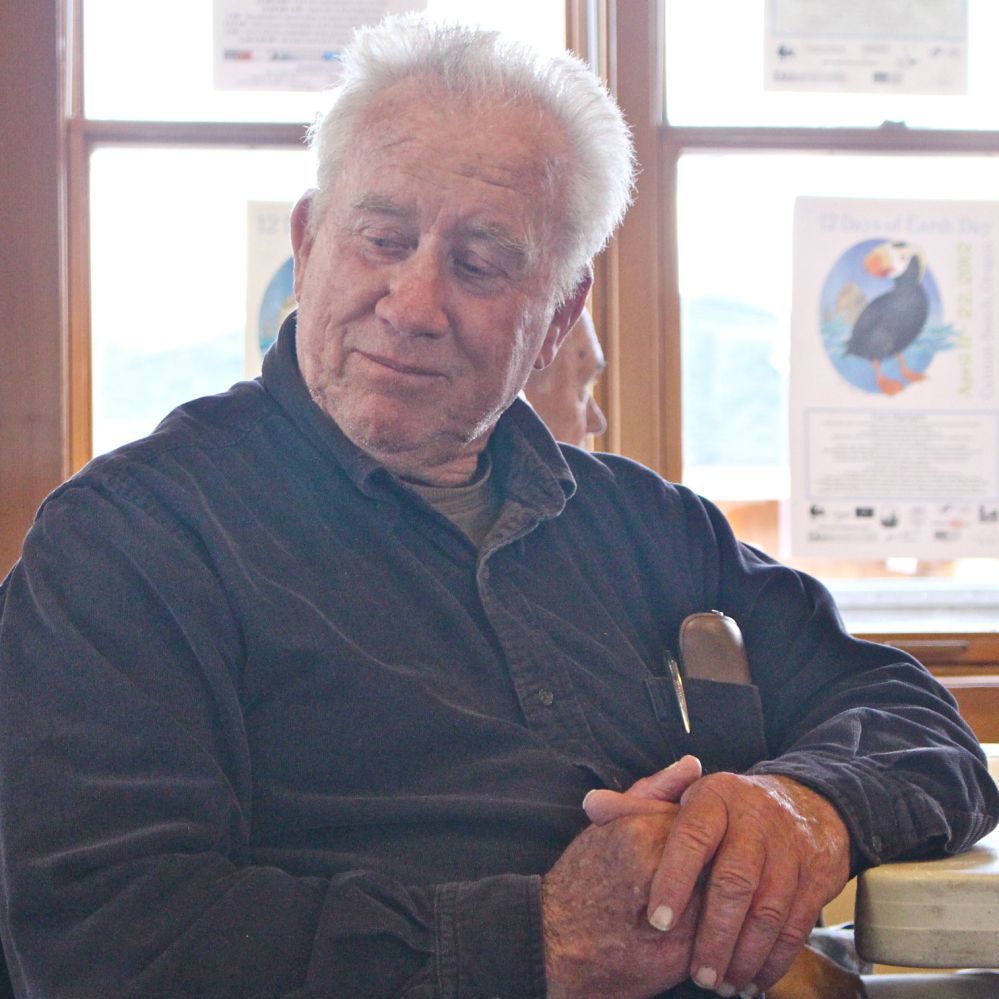 <p>Neal Maine realizes he is about to be given a lifetime environmental achievement award during the Gaylord Nelson potluck. Maine, the co-founder of the Haystack Rock Awareness Program in Cannon Beach, also co-founded the North Coast Land Conservancy and served as its executive director for 10 years.</p>

<p>The downtown street fair boasted about 20 booths, including the Haystack Rock Awareness Program, the Ecola Creek Watershed Council and the Wildlife Center of the North Coast.</p>

<p>Artist Sally Lackaff peels the tape off of her sign "The Native Wetlands," one of nine new interpretive signs she painted for the Cannon Beach Nature Trail. The signs were roughly two years in the making.</p>

<p>Neal Maine realizes he is about to be given a lifetime environmental achievement award during the Gaylord Nelson potluck. Maine, the co-founder of the Haystack Rock Awareness Program in Cannon Beach, also co-founded the North Coast Land Conservancy and served as its executive director for 10 years.</p>

No one can accuse Cannon Beach of taking Earth for granted.

The citys Twelve Days of Earth Day revelry reached its climax April 25 and 26 with a nature trail sign unveiling, an award ceremony for local environmentalists, a playful parade and an Earth-themed street fair.

Later, when an online commenter accused Cannon Beach of being a bit wacky  implying that the locals take Earth Day way too seriously  another responded:

Yeah ... its way more productive to sit on your (arse) and type out excoriating comments about people who are actually trying to make a difference.

If Twelve Days of Earth Day is about nothing else, it is about the belief that small towns can make a big difference in their little corner of the globe.

On the evening of April 25, artist Sally Lackaff revealed the nine new interpretive signs for the Cannon Beach Nature Trail, each showcasing her hand-executed artwork rendered in pencil and watercolor.

The signs provide easy-to-understand information on the plant and animal life in and along the nature trail, the lagoon ponds, the Little Pompey Wetland, and the Ecola Creek Forest and watershed.

In addition, one sign explains how the wastewater treatment plant works, another depicts the history of the tide gate and two honor the indigenous peoples who inhabited the region long ago.

The signs were two years in the making: Lackaffs first meeting with the citys palette committee  an ad hoc committee of the parks and community services committee  took place in April 2012.

The palette committees vision to preserve and maintain our local natural environment according to the Cannon beach comprehensive plan, establishing a sense of place that the community desires for generations to come, Mays agreed, was a very noble vision.

But there was something else that motivated the committee.

That vision was very articulate, but it was not a love of nature that inspired everybody, nor was it an appreciation for passive recreation. It was not an opportunity to educate people, nor an appreciation for beautiful art, he said. It was the fear that the city manager of Cannon Beach would somehow screw up that vision. I know that for a fact.

Neal Maine, a champion of the local environment and self-described Cannon Beach adoptee, observed how, when the city sets its mind on a project, its not just four or five bedraggled people who do all the work.

Instead, many passionate people chip in and, when the project is finished, they spread the ownership around the entire community.

Lackaffs signs, he said, are a celebration of place and place-based living.

Little did Maine know during the interview with him that Ed Johnson  the inspiration for Cannon Beachs original Earth Day celebration  would present him with the Lifetime Environmental Achievement Award during a city potluck at the Chamber of Commerce Community Hall later than evening.

Maine is a founder of the Haystack Rock Awareness Program and a founding member of the North Coast Land Conservancy. He served as the conservancys executive director for 10 years. A former biology teacher at Seaside High School for 30 years, he has worked to raise public awareness of coastal wildlife and natural habitats.

In recent years, Maine has used his exquisite nature photography to draw attention to the regions natural resources, like Haystack Rock and the Little Pompey Wetlands.

Upon receiving the award, he focused his attention once again on the Cannon Beach communitys pride in thinking green thoughts and doing green things.

He recalled a proposal that came before the Seaside City Council many years ago. Nothing like buying an entire watershed or anything like that, but something sustainable-ish. The mayor at the time kind of put the kibosh on it.

I just remember him saying, You know, we dont want to be doing things that make people think were like Cannon Beach, Maine said to roaring laughter and applause.

The 2014 Gaylord Nelson Award  named after the founder of Earth Day  went to Bob Lundy, a lifelong learner of broad environment and ecological interest who serves on several local boards, commissions and committees.

Lundy is involved with land use, infrastructure and local food projects, and he volunteers with the Haystack Rock Awareness Program. He also regularly collects and tests water samples at three sites along Ecola Creek; this information is shared with the city and the Ecola Creek Watershed Council.

The next day, Lundy  wearing the distinguished Gaylord Nelson Award hat (a green baseball cap with a plush fish lanced through it)  and Mayor Mike Morgan led the annual Earth and Arbor Day walking parade.

Volunteers from the city, Haystack Rock Awareness Program, Sea Turtles Forever and other organizations marched south from Antler Street, down Hemlock Street and dispersed in the parking lot between the Cannon Beach Library and U.S. Bank building, where a street fair awaited them.

More than 15 booths, each representing an environmental or community group, drew dozens of locals and visitors. Prominent organizations such as the Wildlife Center of the North Coast, the Ecola Creek Watershed Council and the Oregon Department of Energy shared space with lesser-known ones, including Champions for Cetaceans and the Sea Lion Defense Brigade.

Such events only happen because, as Neal Maine pointed out, the city and its volunteers make it happen.

In this neighborhood, when someone gets an idea and you start to move things, others come forward to help make it a reality, Maine said.