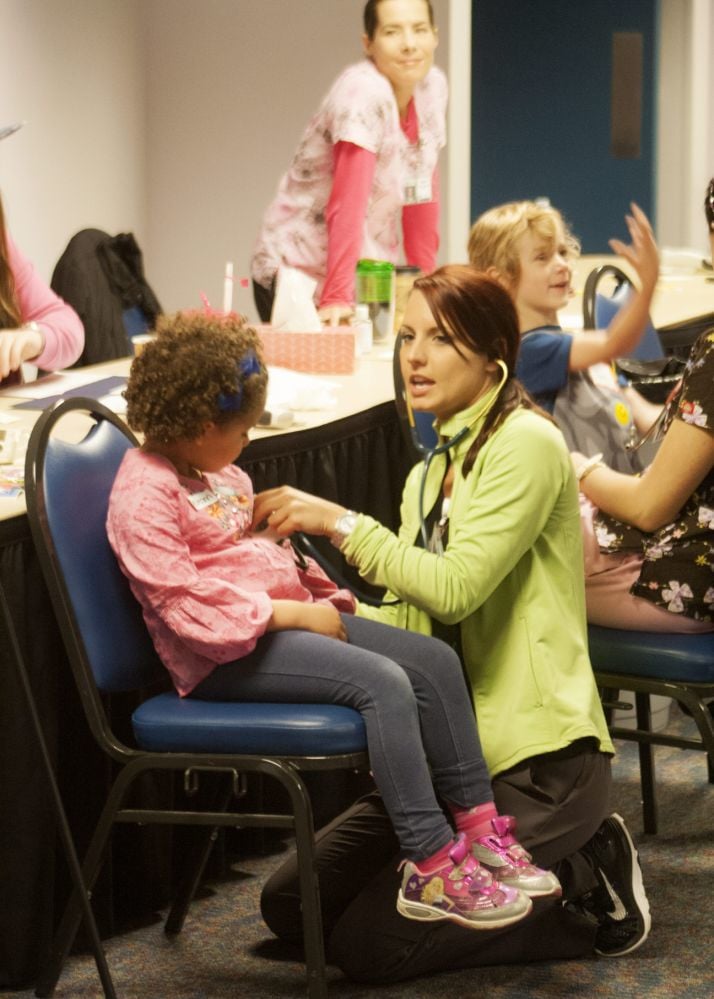 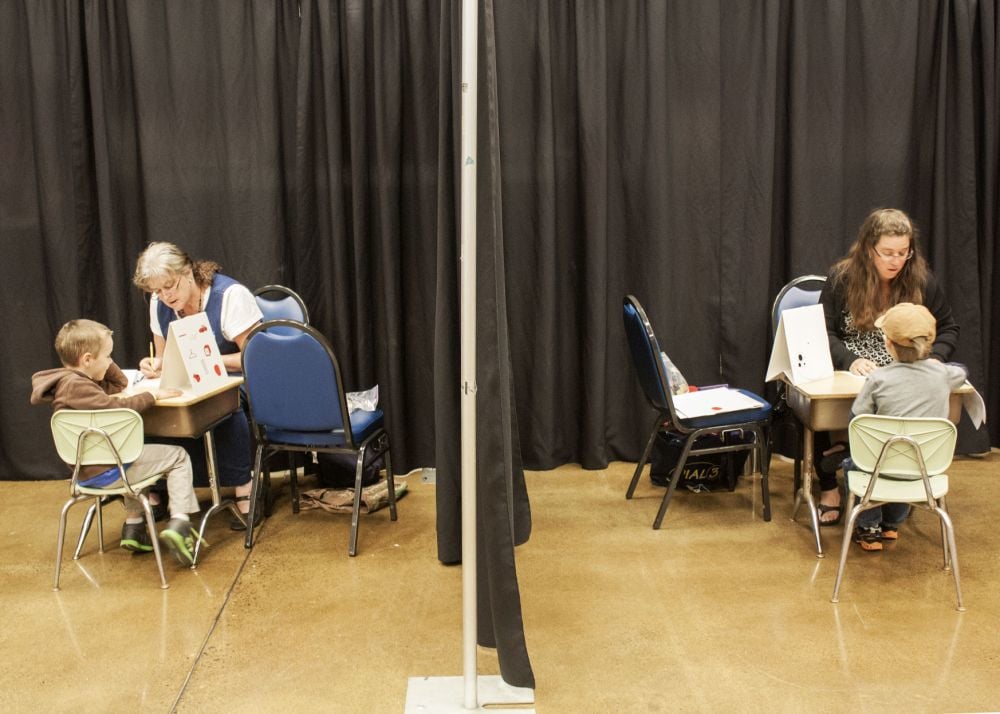 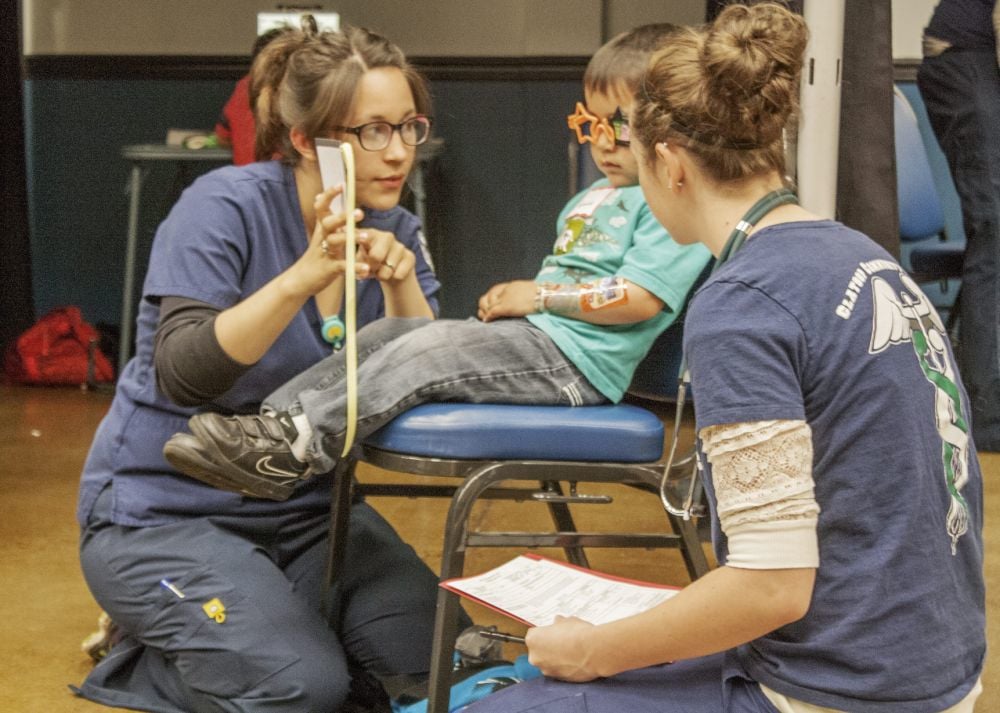 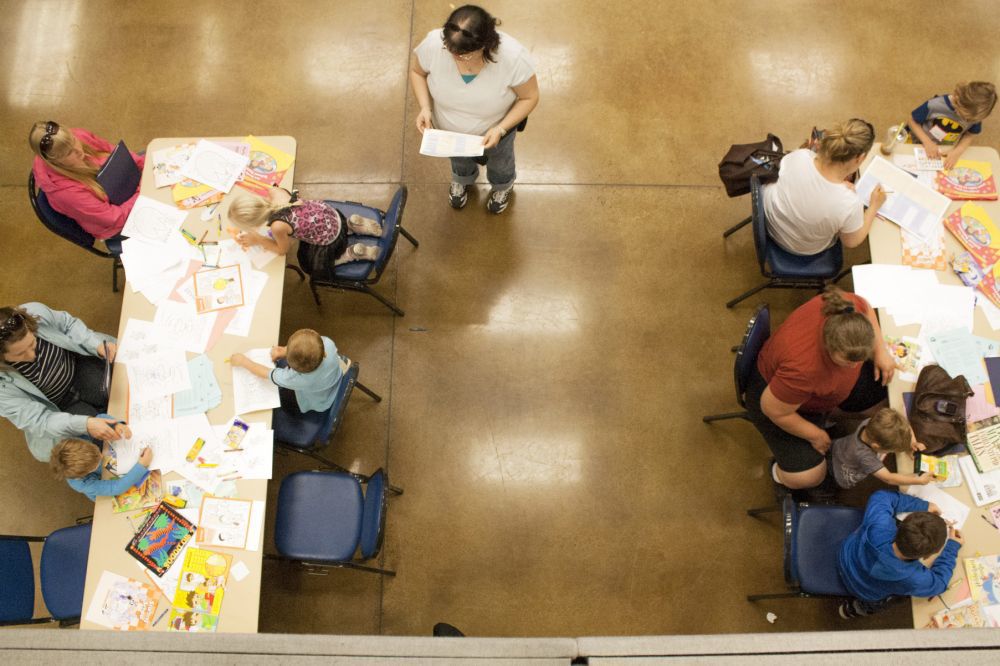 <p>Coloring tables occupy the 3, 4 and 5 year olds who attended the Early Childhood Health and Education Clinic Saturday at the Seaside Convention Center.</p>

<p>Coloring tables occupy the 3, 4 and 5 year olds who attended the Early Childhood Health and Education Clinic Saturday at the Seaside Convention Center.</p>

SEASIDE  Fernando Campos, 3, slumps in a chair inside the Seaside Convention Center while nursing students from Clatsop Community College fit him with various prescriptions of rock-star-themed glasses.

They keep it playful, but his mother Antonia Cazares, standing off to the side with her older son Patricio, 5, said a earlier test caught the older sibling's need for glasses. Medical professionals at the clinic said it's important to catch vision and other issues before a child starts school.

Clatsop Countys P-3 Early Learning Council, an effort to get the areas young started in school on the right foot, organized a two-day, free medical and academic clinic for 3-, 4- and 5-year-olds.

Overall, 86 kids attended the clinic in Seaside, and 52 at the Clatsop County Fairgrounds.

Parents are the first and primary teacher, said Jill Quackenbush, a prevention coordinator with Clatsop County Public Health. Creating better parents who can better help their kids is the focus of another group Quackenbush works with, NW Parenting.

Parents who went to Friday and Saturdays clinics should have a fairly good idea. Slowly but surely, their kids cheered, sulked and otherwise made their way through a circuit of exams and tests.

I dont want to go to school, surmised 5-year-old Deveonn Anglin about the experience, after having her weight, height, blood pressure and temperature taken. And she hadnt even reached the vision testing yet.

Anglin joined 20 to 30 other Butterflies  5-year-olds  from Warrenton Prep Preschool. They switched off on their field trip with the Caterpillars  the 3- and 4-year olds  between the clinic and the Seaside Aquarium.

And as a mother of two, she understands consternation at the gamut of tests. The youngest of her two sons, a kindergartner next year, still needs four shots before school starts.

When I have my time with them, I work with them, said Fabela, who works on blocks, shapes  and not, as she said, talking to her young children like theyre babies. I read to them. My older son reads to the younger son.

She was taking her younger son to Warrenton Prep Preschool, but as a single mom, things got tight. But Fabela still knows the basics of getting her children ready. Its all about ABCs and numbers.

Talk to your kids, said Elizabeth Bastasch, a lead teacher at Seaside Head Start testing childrens cognitive development at the clinic. Its amazing when youre driving or walking, to just talk about the letters on the sign. Parents are the primary teacher.

Bastasch led children through various tests of their motor, cognitive and conceptual skills  does a child know what an airplane, a clock or a thermometer does?

Bastasch, who speaks Spanish, said she also tested childrens language skills, although they can often surpass even what she knows. Last year in my classroom, I had a quadrilingual classroom, she said, describing the English, Spanish, Cantonese and American Sign Language she had to practice.

Hers and other Head Start programs are tapped into the rigors of kindergarten and how to prepare their students. Still, though, some parents can't afford preschool and dont realize what will be asked of their children in school.

Children arent expected to be able to read, said Dieni, but they should be able to count to 20 and know the alphabet visually and orally. Were not saying that we want parents to be drilling their kids on these skills, but there are certainly fun games that they can play from the time that theyre 2, 3 years old, up until theyre 5 and they start kindergarten.

A state assessment given to all incoming kindergartners to test early reading, math and cognitive development, along with self-regulation and social competence, showed theres a lot of work to be done. On average, kids in various Clatsop County schools could:

 Produce between 3.7 and 7.9 sounds of uppercase, lowercase and blends of letters, out of a possible 110.

 Answer between 7 and 9.2 questions about counting, simple addition, simple subtraction and recognizing number patterns, out of a possible 16.

For Dan Gaffney, the face of the Early Learning Council, the clinics are just the beginning.

Parents finding primary care providers, speech services and ideas in how to help their child further progress were equally exciting to parents and service providers, said Gaffney about the clinic.

The Oregon Community Foundation recently awarded the early learning council $75,000 each year for the next three years to support its efforts.