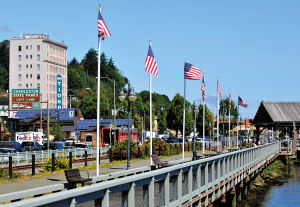 COOS BAY -- Will it be patriotism, tradition or a desire for something new that ultimately unfurls upon the flagpoles that line the Coos Bay Boardwalk?

The city is calling the question, and they want residents to help them decide whether or not to change the 22 flags that adorn the city's bayfront.

Traditionally, the city flew international flags as a nod toward the heritage of the international port designation for Coos Bay.

That took a patriotic change under a different City Council back in 2009, when it was decided to fly the American flag on all flag poles until all troops returned from Iraq and Afghanistan. A taller, lighted United States flag has also remained flying across the street at the Purple Heart Memorial.

In 2012, the City Council voted to stay the course with the stars and stripes.

Still, Mayor Crystal Shoji said this week the questions keep coming in about when they might change back, or if the council will adopt a new policy entirely. She noted that, even if they go back to international flags, the all-U.S. theme could be flown once again during holidays, like Independence Day and Memorial Day.

"It's one of those little things, but we get a lot of people wondering if we are going to go back to the international flags, which I like," Shoji said Wednesday. "We are a port city. We are an international port. So, I do think that is meaningful, but other people might have other ideas and we are welcoming those."

Shoji says at this point the council is just taking some public input. They could make a decision sometime in the next couple of months. However, there is no strict time table.

This is just to get people thinking and talking about what they would like to see.

In Coos Bay's August newsletter, other options were suggested based on a variety of real world examples. For instance, Mount Rushmore has an Avenue of Flags representing the 50 states, territories, commonwealths and districts of the United States, while the Oregon State Capitol has flags from every state in the union and Tribal flags from around the state of Oregon.

"The flags make a visible statement on the Boardwalk," Shoji said. "We would like to have an interesting display that tells a story about our community. A plaque with explanatory information could be provided to help tell the story. Please share your ideas."

Community members can contact the mayor at Coos Bay City Hall, 500 Central Ave., or by email at mayor@coosbay.org.