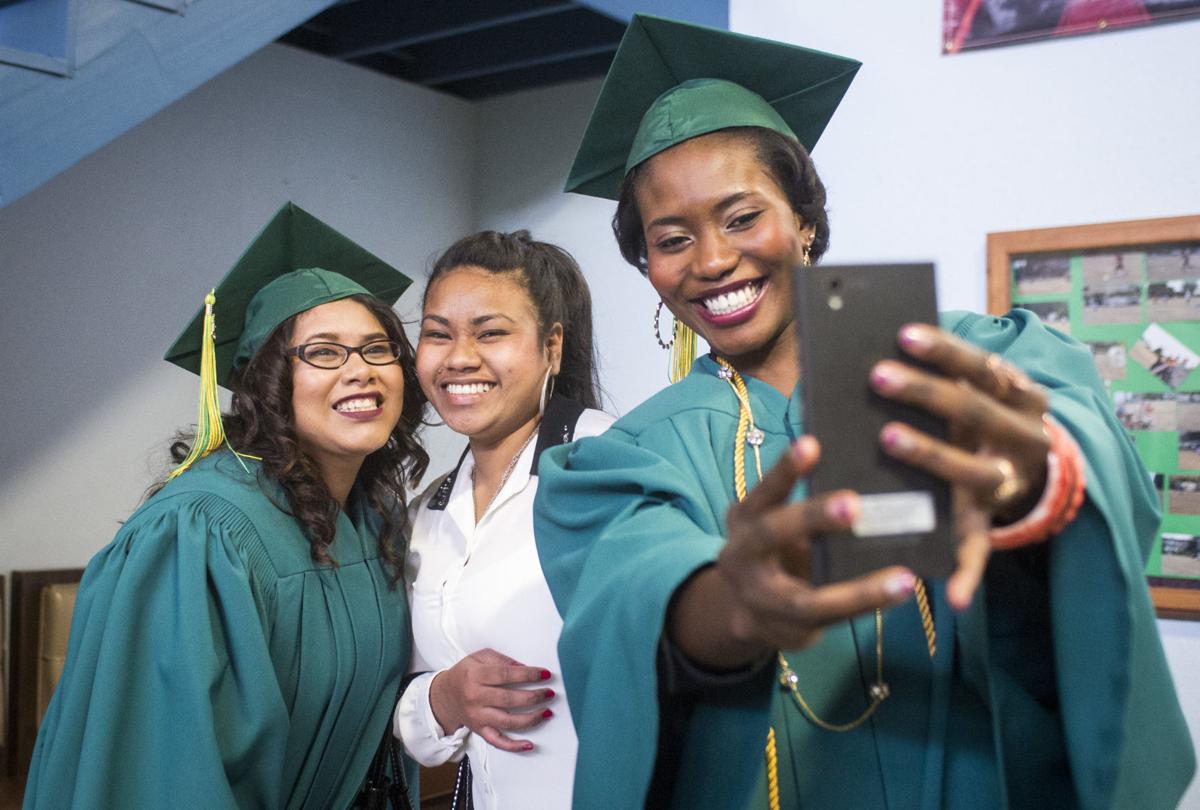 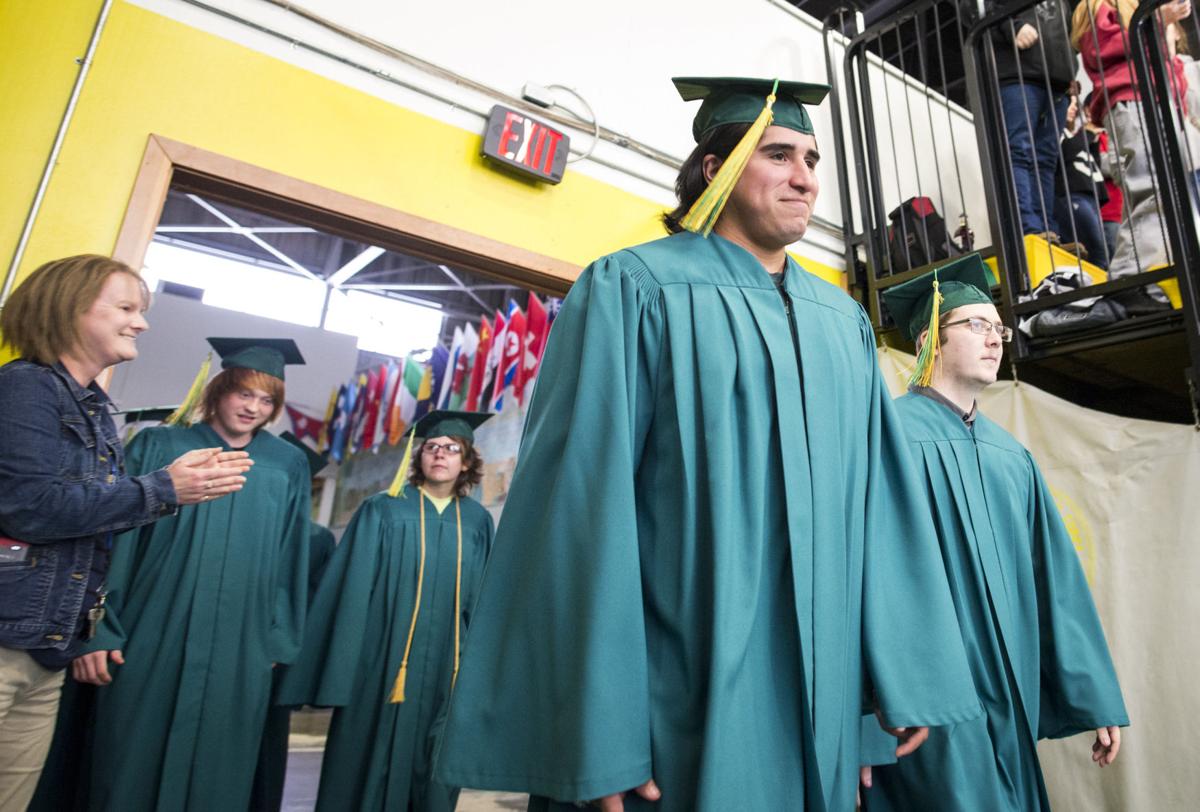 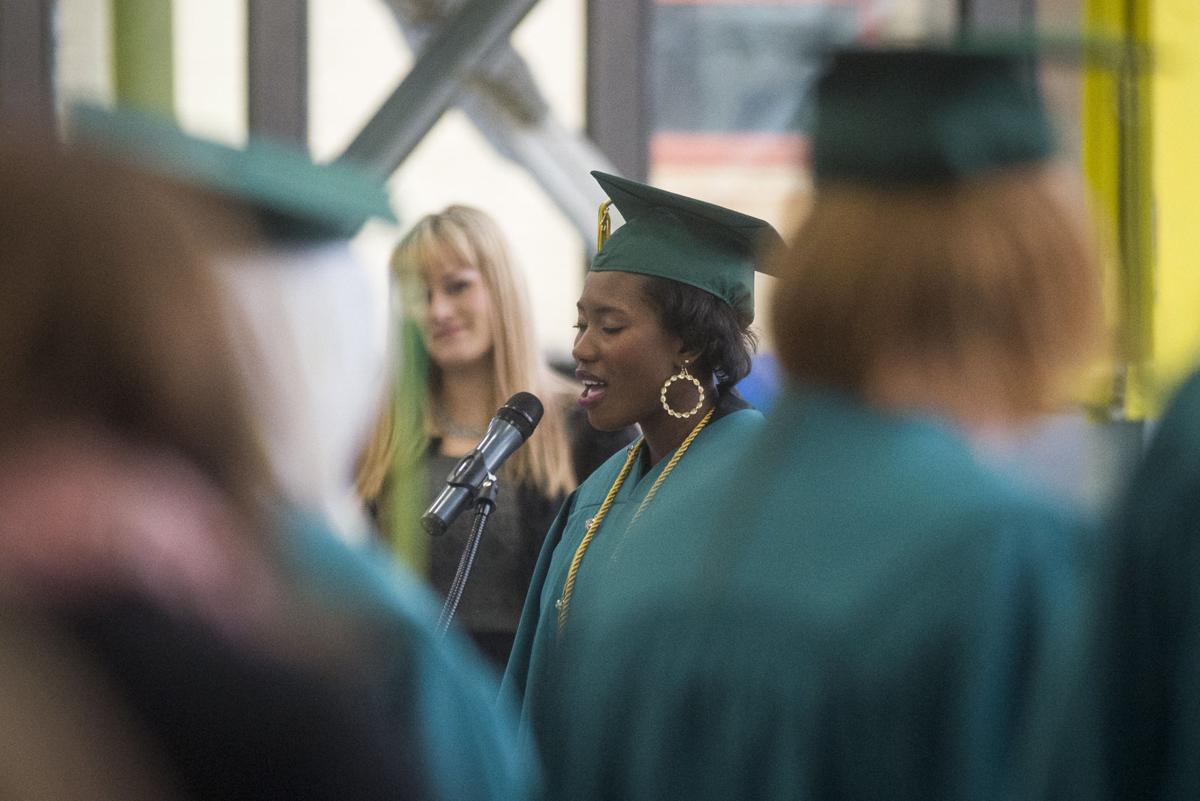 Thamar Baker sings the national anthem during the graduation ceremony. 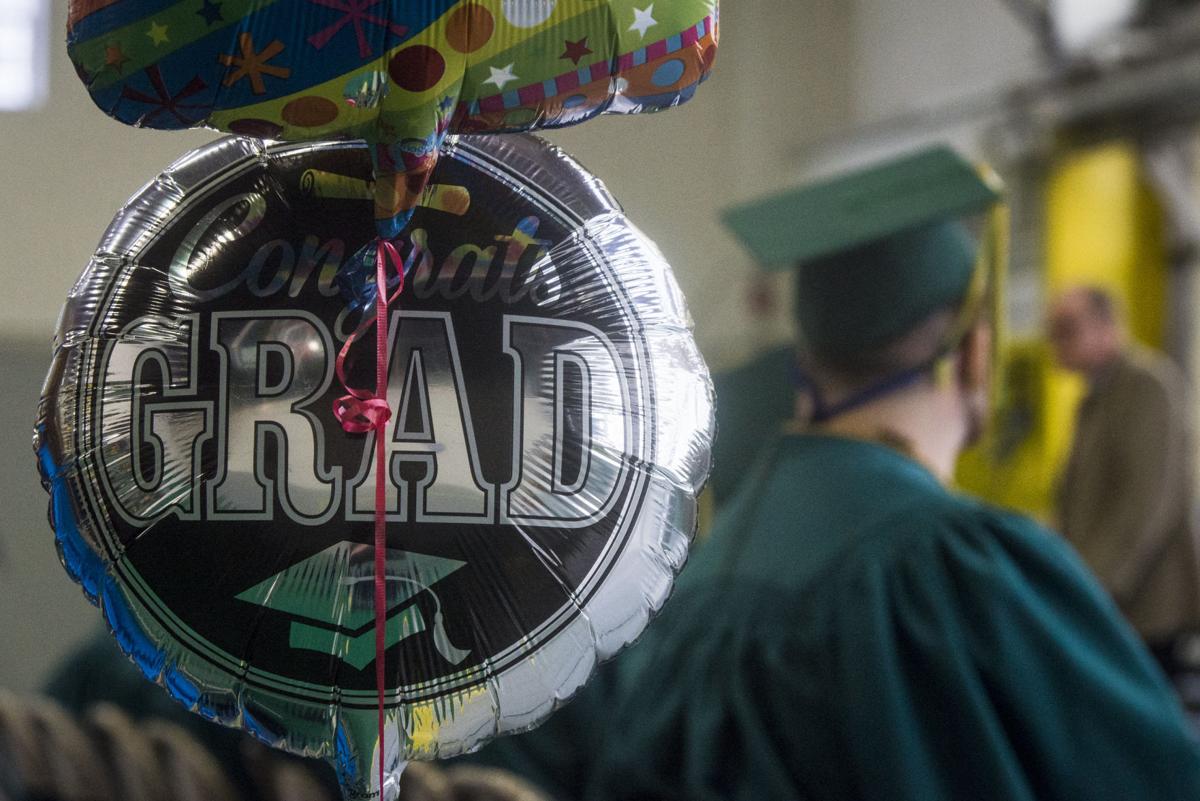 Balloons float in the background during the Tongue Point Job Corps graduation ceremony. 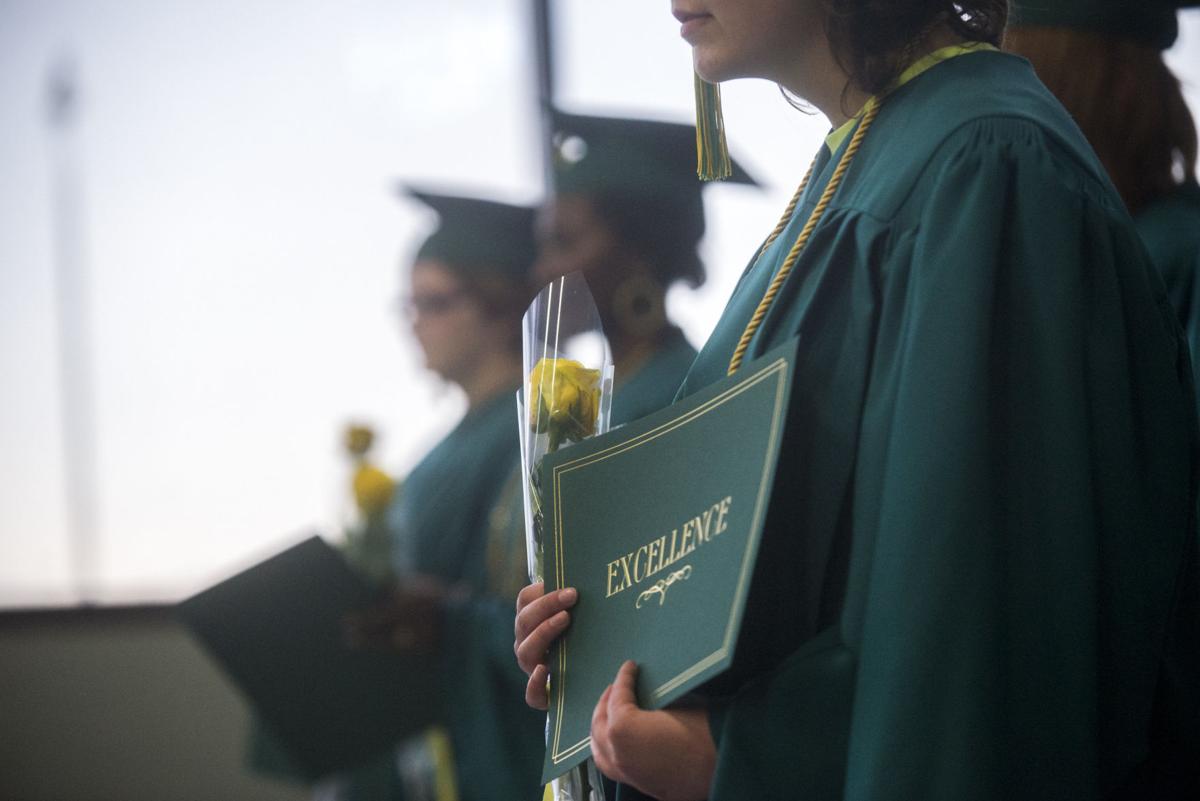 Graduates hold up their certificates during the graduation ceremony. 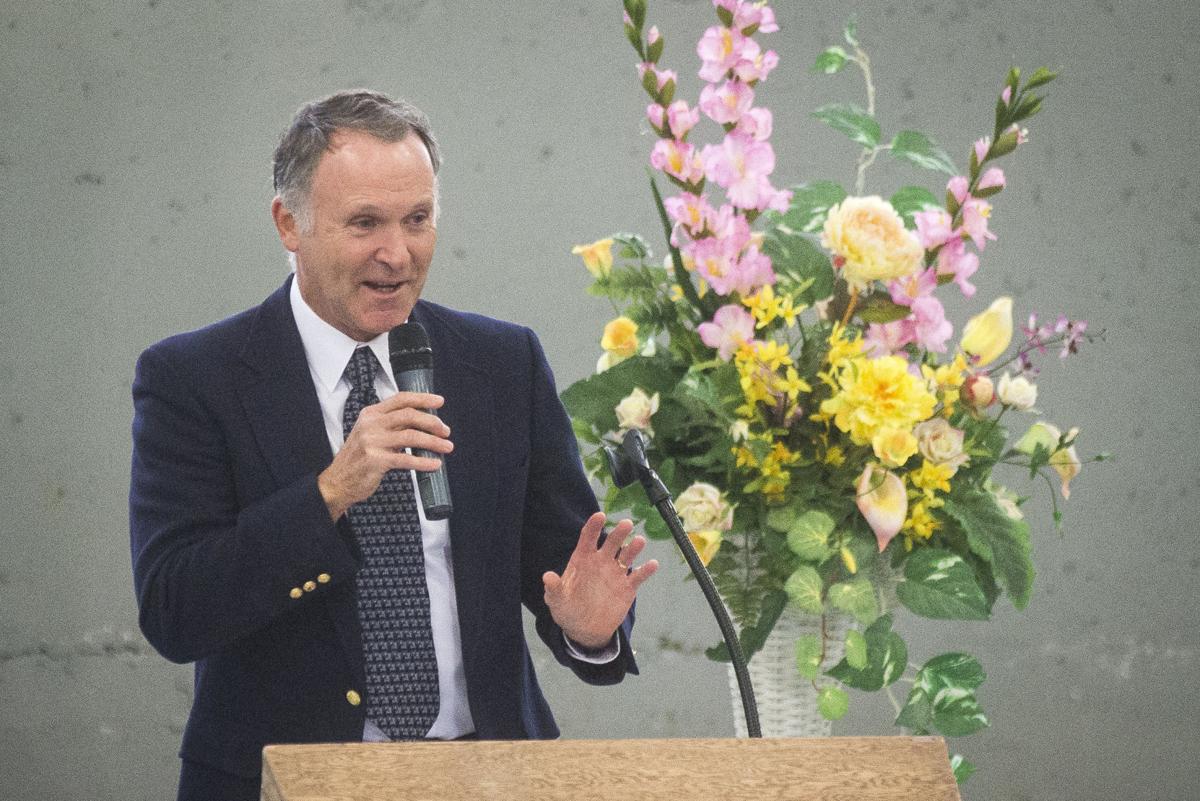 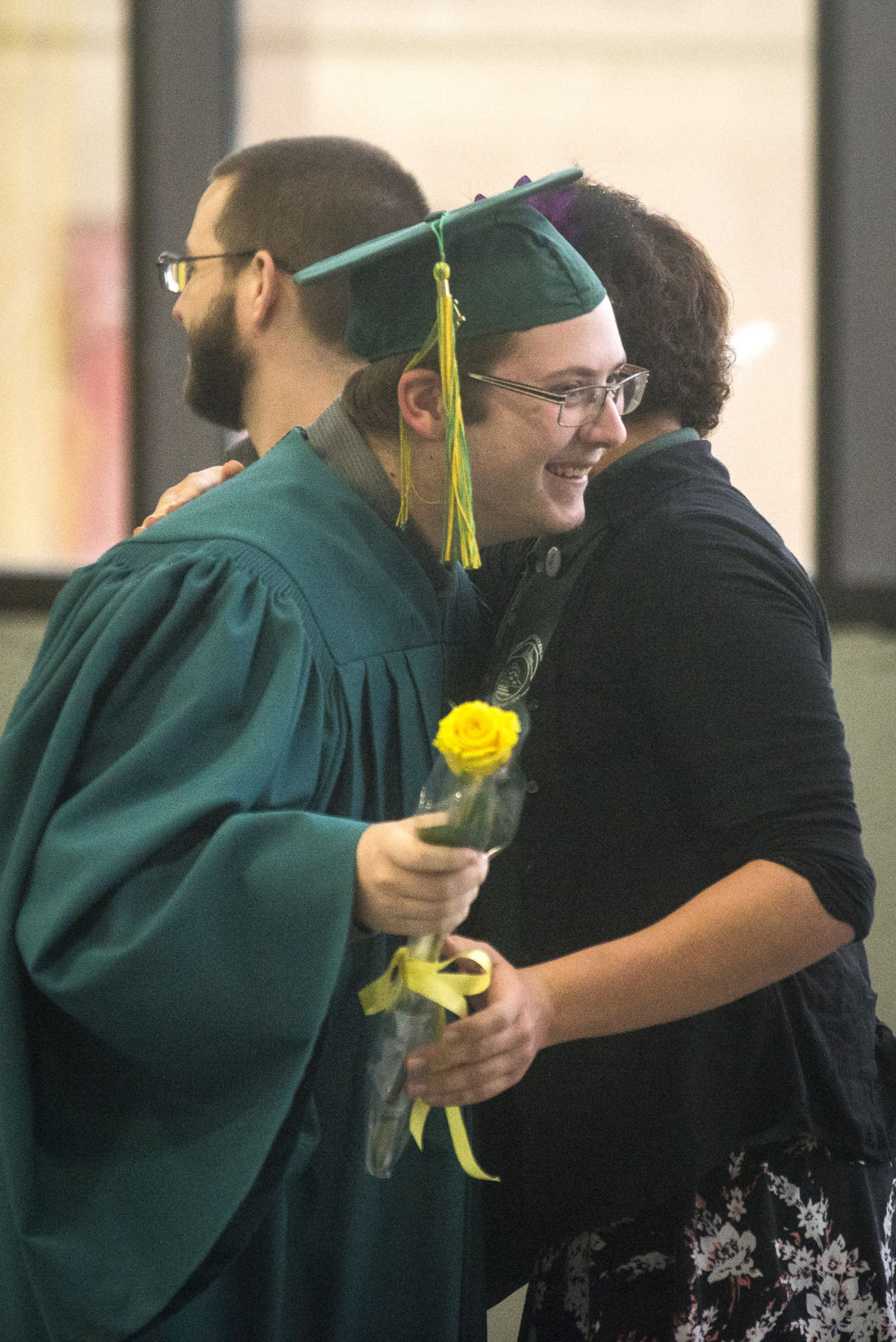 Thamar Baker sings the national anthem during the graduation ceremony.

Balloons float in the background during the Tongue Point Job Corps graduation ceremony.

Graduates hold up their certificates during the graduation ceremony.

The graduates of Tongue Point Job Corps Center, clad in green, lined the front of the gym in the former World War II-era airplane hangar. Along with family and friends gathered Friday for graduation, the 17 graduates listened as 21-year-old finance student Thamar Baker sang the national anthem, complete with a hint of the Creole accent she took with her from Haiti nearly six years ago.

Job Corps, the federally subsidized job-training program founded 50 years ago, takes all manner of students. They train in specific trades and learn to be good employees, as they try to escape poverty and break into the American middle class.

A recent analysis by the U.S. Department of Labor found Tongue Point to be the sixth best center out of 127 nationally at helping students catch up on their education, train in specific trades and transition into full-time employment afterward.

Many graduates, already on to the next stage of their lives, don’t make it to graduation. Katrina Morrell-Gasser, a spokeswoman for Tongue Point, said Friday that 308 students over the year were placed in a job, the military or advanced training program. She said the center averages about 90 percent of graduating students placed in a job, with an average wage of nearly $13.

After an earthquake ravaged Port Au Prince, Haiti, Baker and two of her younger siblings were adopted by Nat and Kris Baker in Colville, Washington, who had already adopted one of her sisters. Baker came to America as a bilingual 15-year-old fifth-grader, but she only spoke Creole and French. Placed in the ninth grade upon arrival, Baker said she studied days, nights and weekends to learn English and graduate at 18 with her peers.

A self-declared fan of fashion, Baker spent a year at Pensacola Christian College in Florida studying business management in hopes of one day opening her own clothing store. But she said the university was too expensive, and she moved back to Colville to work off her student debt. One of her friends told her about Job Corps, and she enrolled a year and a half ago to study finance.

Baker, who now heads to California for advanced clerical training, dreams of taking her bright smile into the sky as a flight attendant. She thanks her instructors at Tongue Point and the U.S. taxpayers for investing in her future, adding she hopes to give back to her devastated homeland.

“I want to go back and help my parents, my family,” Baker said. “But most importantly, I want to build a school or an orphanage in Haiti.”

For Gabriel Chavez, a facilities maintenance student and self-described underdog, graduation was surreal.

“It was tough, and when I got close to completion (at Job Corps), I thought I would fail, because nothing good ever happened in my life,” said Chavez.

Born in California and raised in eastern Washington, Chavez said his father was deported to Mexico when he was 2 years old; his mother bailed on him at age 16; and his stepfather, a handyman who had taken him in, has cancer and lost his house and the ability to help his stepson. When he contacted a recruiter for Job Corps, Chavez, who had dropped out of school in the fifth grade, was couch-surfing at a friends in Prosser, Washington, with little future prospects. His luck seemed to turn a corner at Job Corps.

In less than two years, he earned his high school diploma and got certifications in facilities maintenance. He met his girlfriend, Raven Myth Najar, who graduated with him Friday in medical assisting.

The two now rent a house near Salem. Chavez builds fences, and Najar works at a nearby hospital.