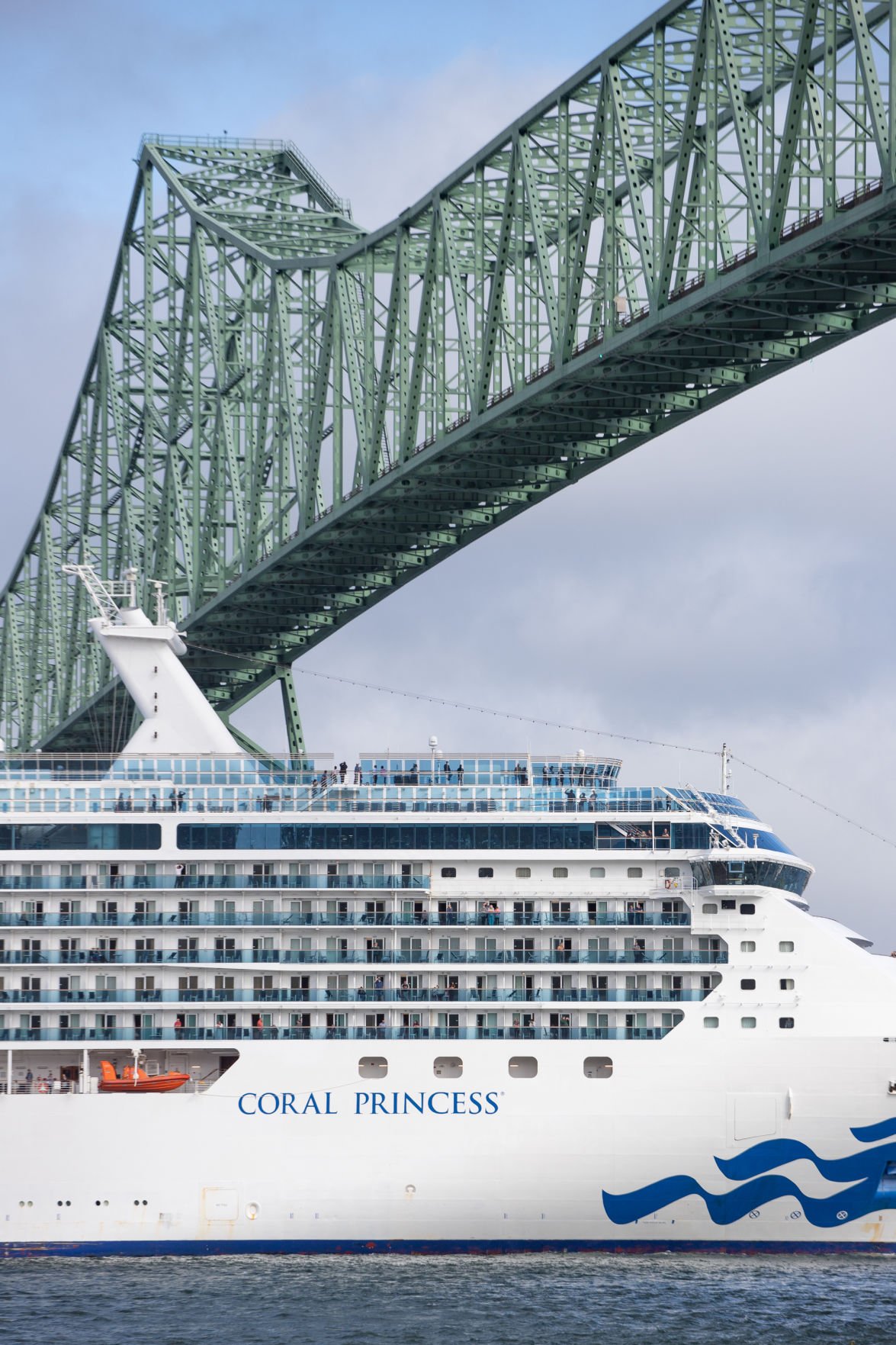 The Coral Princess, carrying up to 3,000 people, cruises beneath the Astoria Bridge before anchoring in the Columbia River. 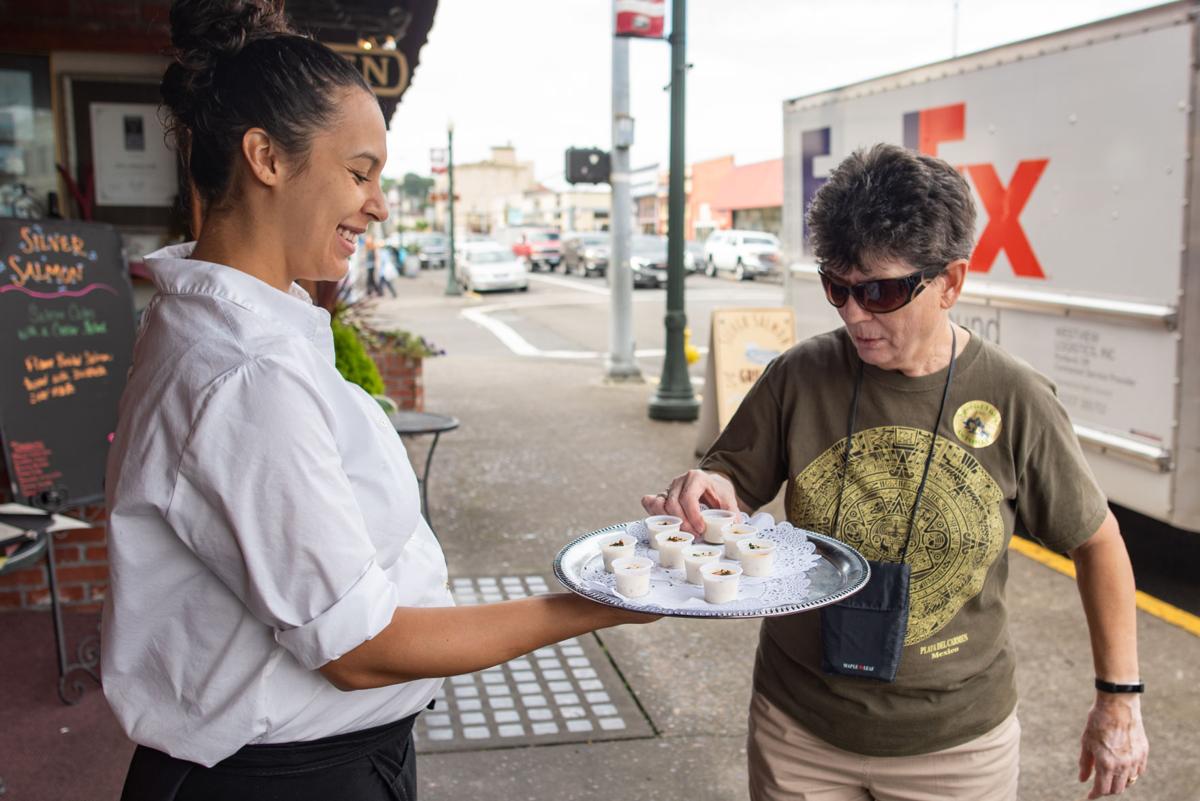 Melissa Faber, a busser at the Silver Salmon Grille, gives a sample cup of clam chowder to Mary Bartell, a cruise ship passenger from Toronto, outside the restaurant. 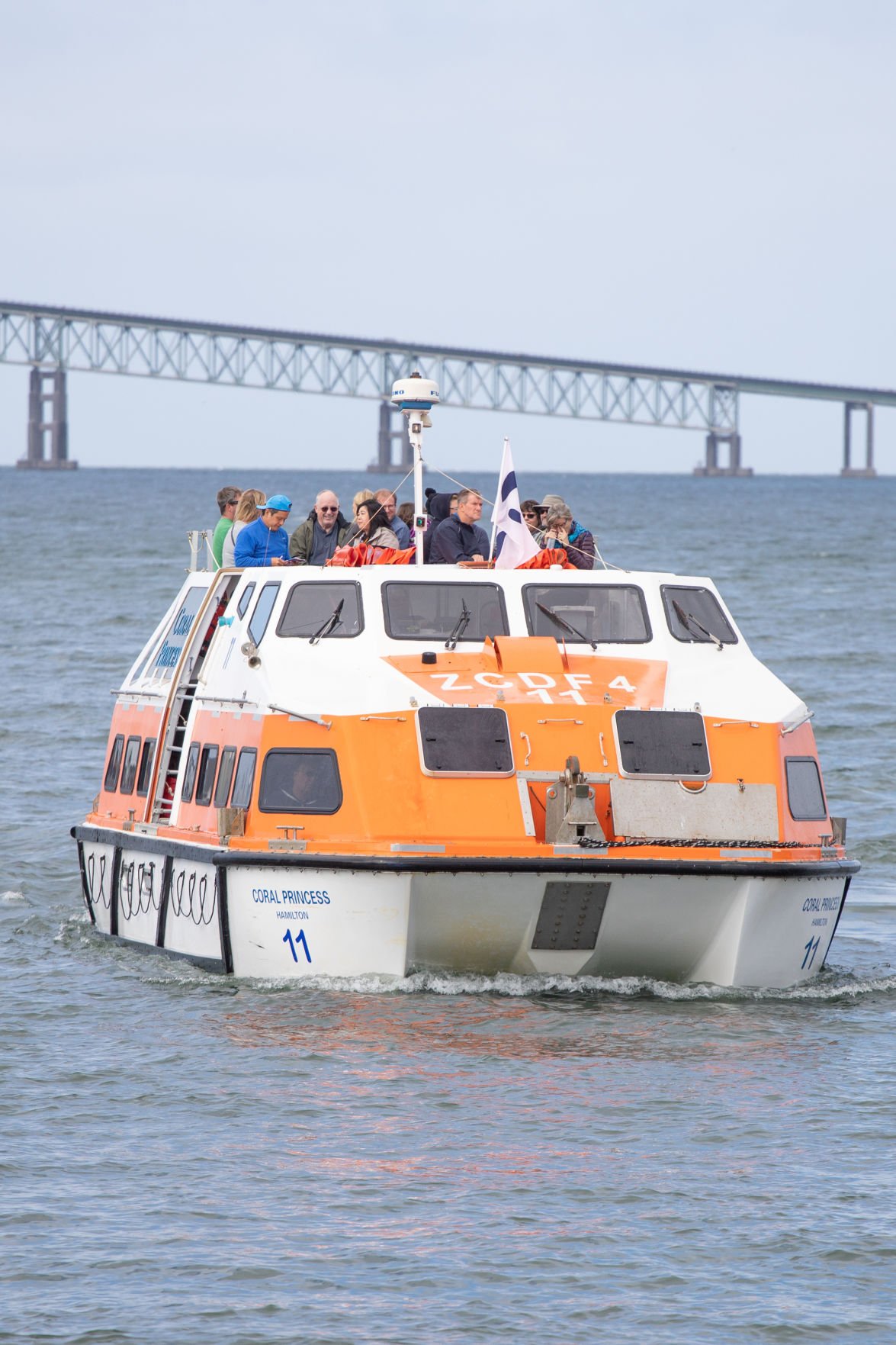 A lifeboat from the Coral Princess brings tourists to the shore at the 17th Street Dock. The cruise ship anchored in the middle of the river.

This year’s cruise ship season crescendoed Thursday in Astoria with around 4,500 passengers arriving on three ships, part of an estimated 30,000 visitors on 17 ships from April through October.

Next year, more than 77,000 visitors on 35 ships are scheduled to arrive, including two days in one week with more than 5,000 passengers, raising questions about when enough is enough.

Hundreds of passengers flooded the Columbia River Maritime Museum parking lot Thursday afternoon, shuttled by orange-and-white lifeboats from the Coral Princess, anchored in the middle of the Columbia River. The Coral Princess carried up to 3,000 passengers. Two 700-passenger boats, the Seven Seas Mariner and Oceania Regatta, parked along Pier 1 at the Port of Astoria.

Once they touched land, the Coral Princess’ passengers scattered. Some headed to the museum. Others gathered to take family photos with the Astoria Bridge in the background.

Swedish, Mandarin and Spanish could be heard as employees and volunteers passed out flyers for attractions like historic walking tours or the Astoria Ale Trail exploring local breweries. Tour buses headed to regional destinations like Mount St. Helens, Fort Clatsop and Cannon Beach.

Outside of the Silver Salmon Grille, Melissa Faber handed out samples of clam chowder on a silver platter, a special offering to a steady stream of tourists. The restaurant tripled its wait staff and doubled its bussers for the arrival of the cruise ships.

“I drove an hour here just because we have three cruise ships coming in today,” said Angela Fairless, who commuted from Rainier to provide backup at the Astoria Coffeehouse & Bistro. “Which is awesome. It helps our economy.”

Astoria police added an officer on duty because of the influx of visitors. Sgt. Brian Aydt wouldn’t typically be working Thursday, but said he was asked to come in and patrol the Astoria Riverwalk.

“It’s kind of a twofold process: information for people as they have questions … and trying to keep some of the other people who spend all their time on the Riverwalk under control a little bit,” he said.

How much is enough?

It helped that the three ships Thursday staggered arrival and departure times, and that two were smaller, he said. This season’s lineup has been light compared to the previous three years, when Astoria hosted on average about 20 ships and 43,000 passengers annually.

Only 65% to 70% of cruise ship passengers usually disembark and venture into town, Conner said, meaning around 3,000 visitors to Astoria on Thursday.

Next year could tax that capacity. On Sept. 22, the Celebrity Eclipse and Star Princess are scheduled to bring more than 5,800 people into port. On Sept. 27, the Koningsdam and Ruby Princess could bring nearly 5,400 people. Conner and other local business leaders have already started planning.

David Reid, the executive director of the Astoria-Warrenton Area Chamber of Commerce, said he has reached out to other busy cruise ports to see how they handle transportation, restrooms and other issues.

“They’re going to be a test,” he said of the peak days. “But we know when they’re coming, so there’s a little time to plan.”

Part of Astoria’s good reputation with the cruise lines comes from the Clatsop Cruise Hosts, volunteers who help shepherd visitors around town. Cyndi Mudge, the group’s coordinator, who is also the director of Astoria Sunday Market, said more volunteers will be recruited this spring.

“We’re fine to complete this cruise ship season,” Paul Lewicki, Sunset Empire’s chief operating officer, said during a recent board meeting. “We just still need to add more drivers to our ranks to man all of the programs that we’ll have going.”

Jeff Hazen, Sunset Empire’s executive director, said the transit district is looking to buy larger buses to increase capacity and could reach out to neighboring agencies for help if needed. The district has so far added two new drivers out of an estimated 10 needed for an upcoming expansion of services, he said.

Some businesses are skeptical about the financial benefits of cruise ship visitors wandering through town.

“When it comes to cruise ships, there’s a pretty wide variety in terms of the type of customer,” said Joey Ficken, front of the house manager at Street 14 Cafe. It’s hard to know “whether they want to buy a cup of coffee and use your internet, or if they are looking to get a different food variety than they would get on the boat, or they are really just looking for the town experience.”

Mudge, who sets up a miniature Sunday Market on Pier 1 to catch visitors on their way off the boats, agreed it’s a gamble what cruisers will spend money on. But she said her vendors see a bump in business when ships visit .

“If it’s not working for one segment, that doesn’t mean you stop doing it,” she said.

She and Reid said there are ways local businesses can better market to passengers. Astoria doesn’t rely on cruise ships for business, but would feel the impact if visitors — who don’t exacerbate traffic and parking issues by bringing cars — stopped coming.

“I like the fact that we are just the offseason, just the shoulder season,” Reid said. “It feeds folks in here when we need them. I don’t aspire for us to be a year-round cruise port, because you trade your quality of life for building that infrastructure, that capacity.”