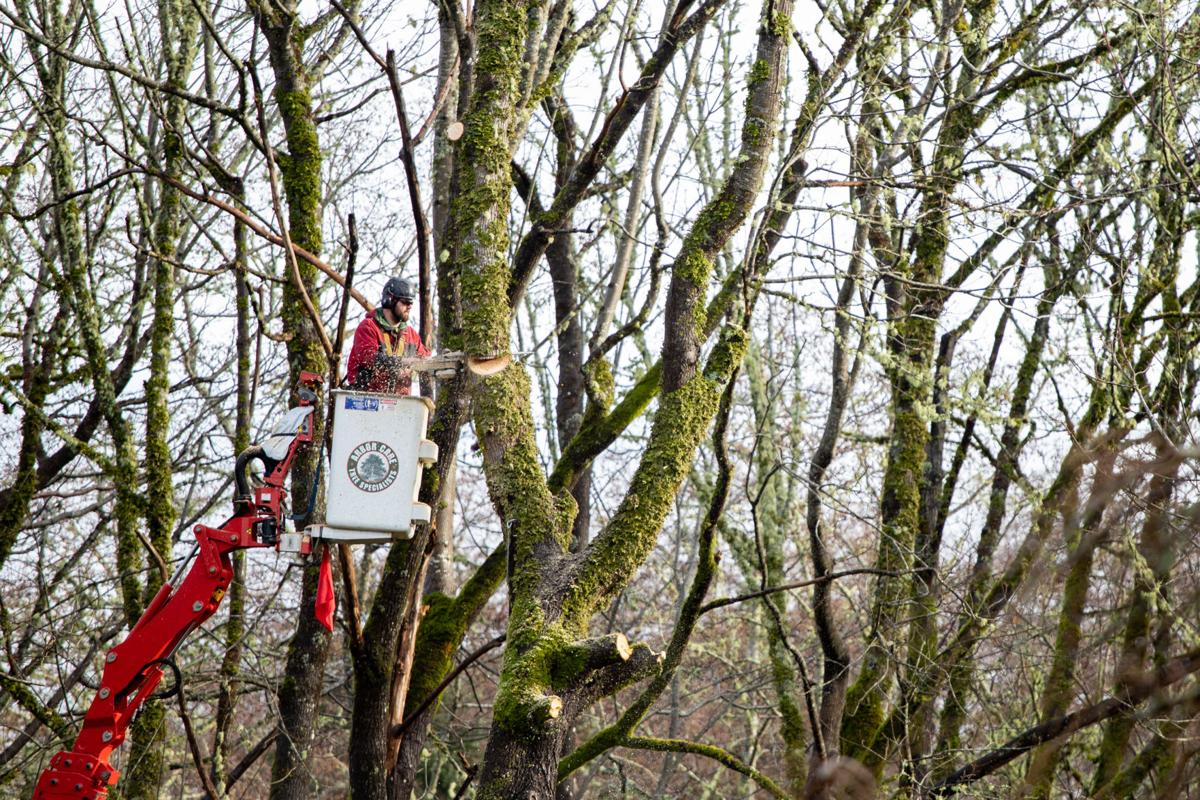 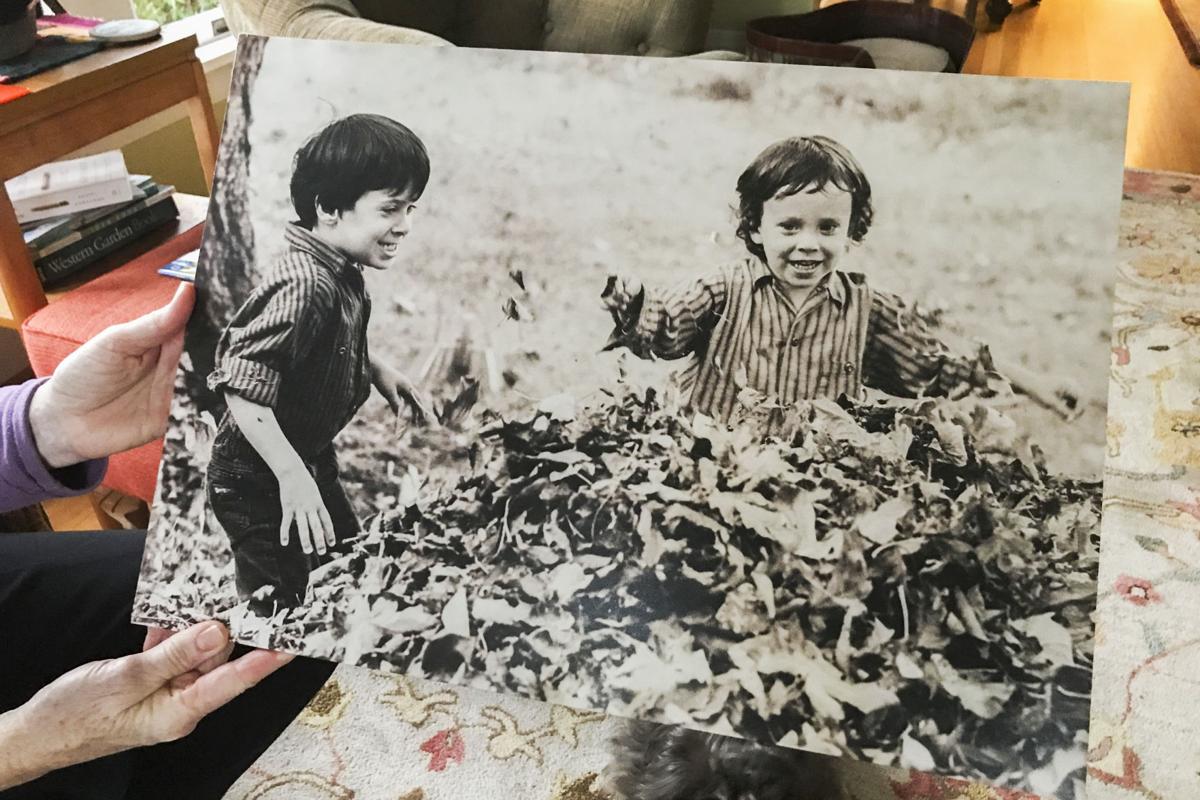 Connie Clifford holds a photo from 1987 of her children, Daniel and James Benoit, playing in a pile of leaves below a maple in Violet LaPlante Park. 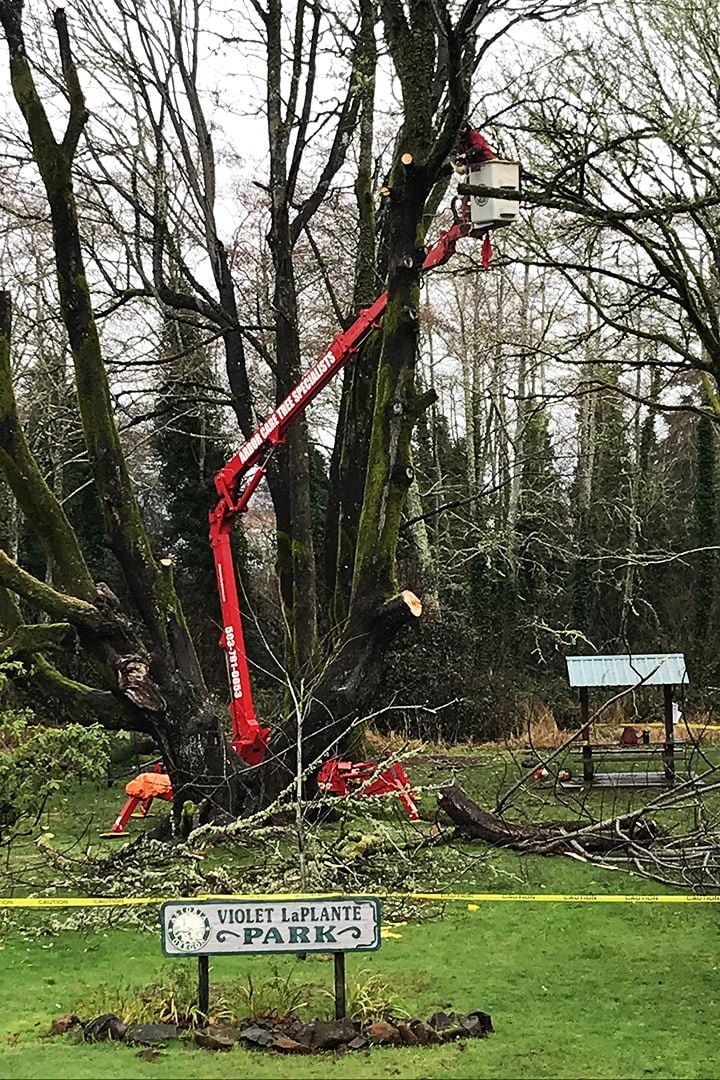 A crew from Arbor Care Tree Specialists began taking down a bigleaf maple at Violet LaPlante Park in the Alderbrook neighborhood.

Connie Clifford has more than 40 years of history with the bigleaf maple behind her house, standing sentry at the center of Violet LaPlante Park in Alderbrook.

A photo in The Astorian from 1987 shows her sons, Daniel and James Benoit, playing in a pile of the tree’s leaves.

But Clifford said she understands why the city started removing the popular tree Thursday, after it was further damaged in a windstorm.

“We’ve lived in the Northwest long enough to know that trees can … these windstorms can wreak havoc, and that tree could hit our house,” she said.

High winds recently sent the maple’s branches crashing down into the park. The tree was stabilized with a cable in 2015 after a crack between its dual trunks — rising from a main stem like halves of a wishbone — became infected by fungus and rot.

Jonah Dart-McLean, the city’s parks maintenance supervisor, said the estimate was that the tree had five to 10 more years left after the fix. The parks department also planted a replacement maple nearby.

“The tree would not be able to stay up without the city absorbing a significant amount of risk,” Dart-McLean told the City Council on Monday.

On Thursday, a crew with Arbor Care Tree Specialists began cutting the behemoth down to the stump. Dart-McLean said the tree will be taken down to the base, from which the city hopes starts will sprout.

Ed Overbay, a local furniture-maker with a mill and kiln, will process the hardwood into lumber. Conditioning the wood could take years, Dart-McLean said. The city has also received requests from others wanting a piece of the tree, but first needs to figure out how much timber is available, he said.

A citywide tree inventory in 2015 documented more than 1,800 in city parks, providing a road map for future maintenance. The city took down some hazards, but has been fortunate with mostly robust trees, Dart-McLean said.

The City has acted quite responsibly in this matter, not only with the attention paid to the tree but also in its use of ArborCareNW, a trusted local contractor. It's annoying to see other, non-local tree services being used around town and elsewhere in the County when ArborCareNW can provide the same or better service.