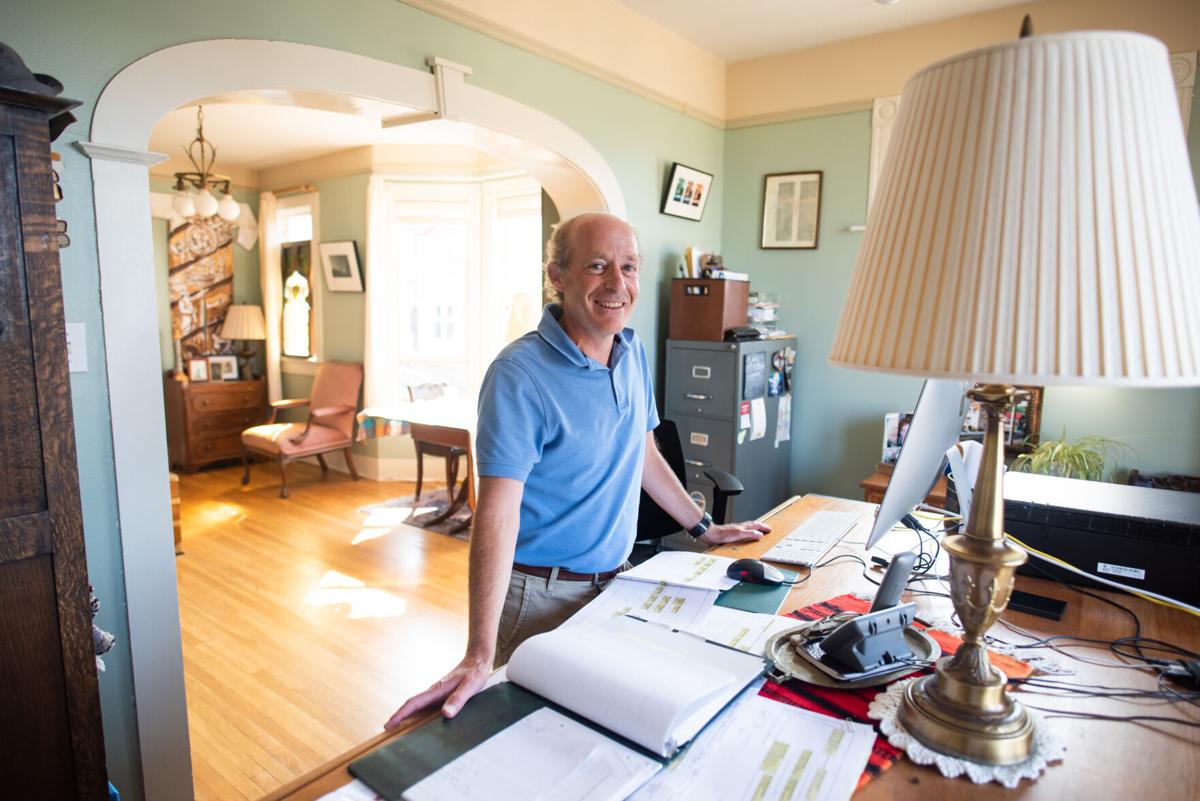 John Goodenberger is writing a book on the history of the Flavel family. 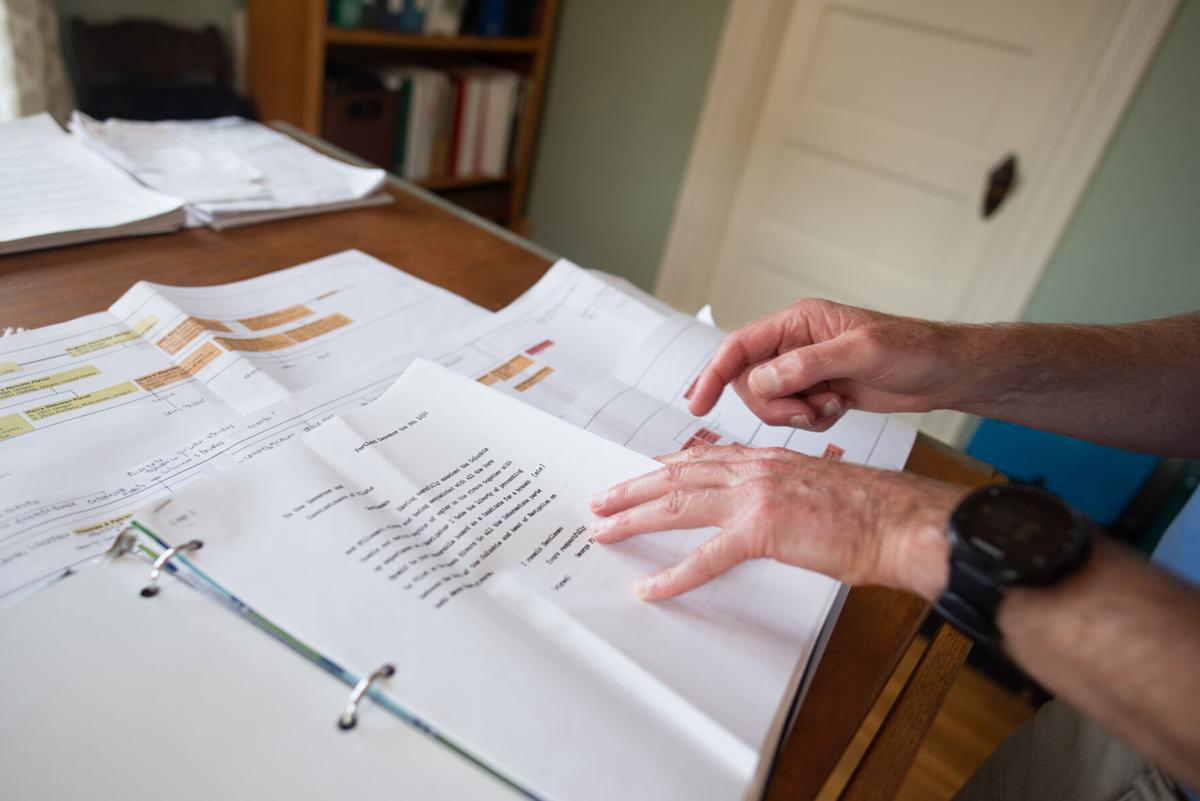 John Goodenberger flips through his binder filled with research on the Flavels. 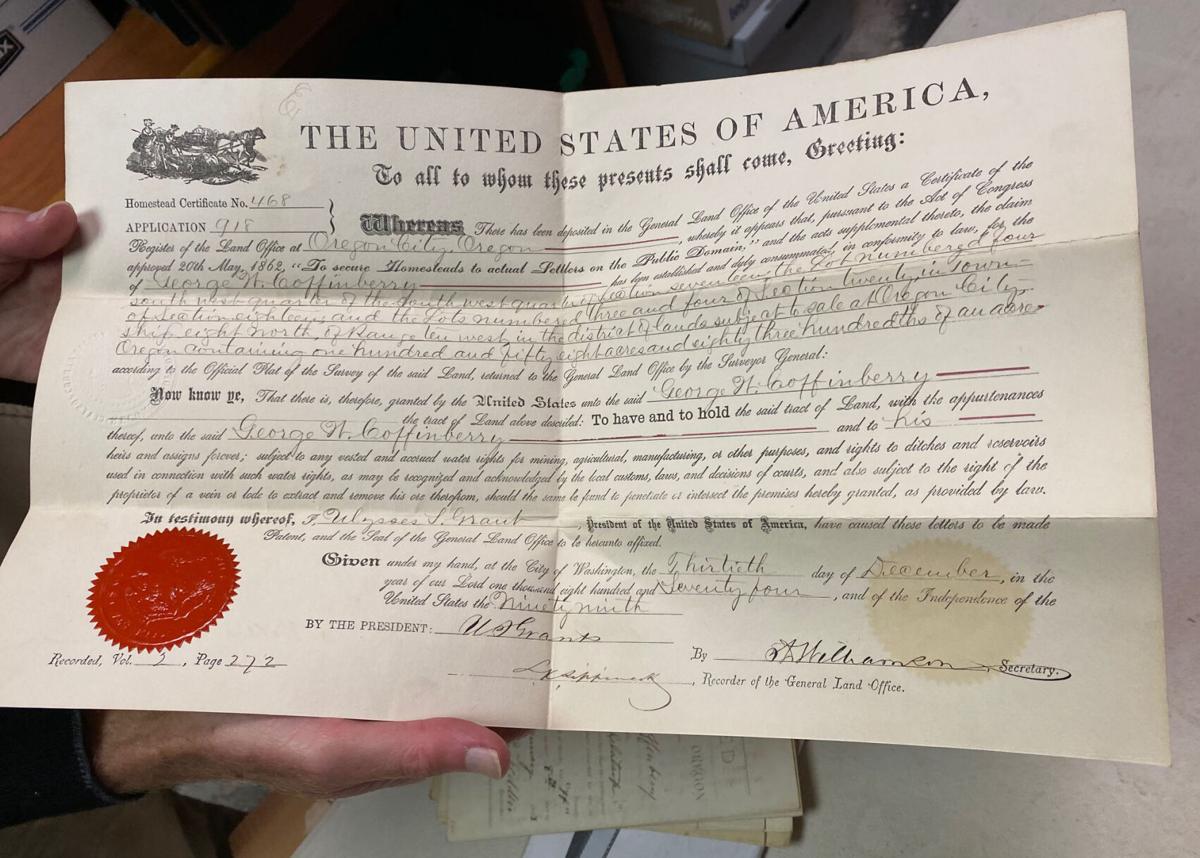 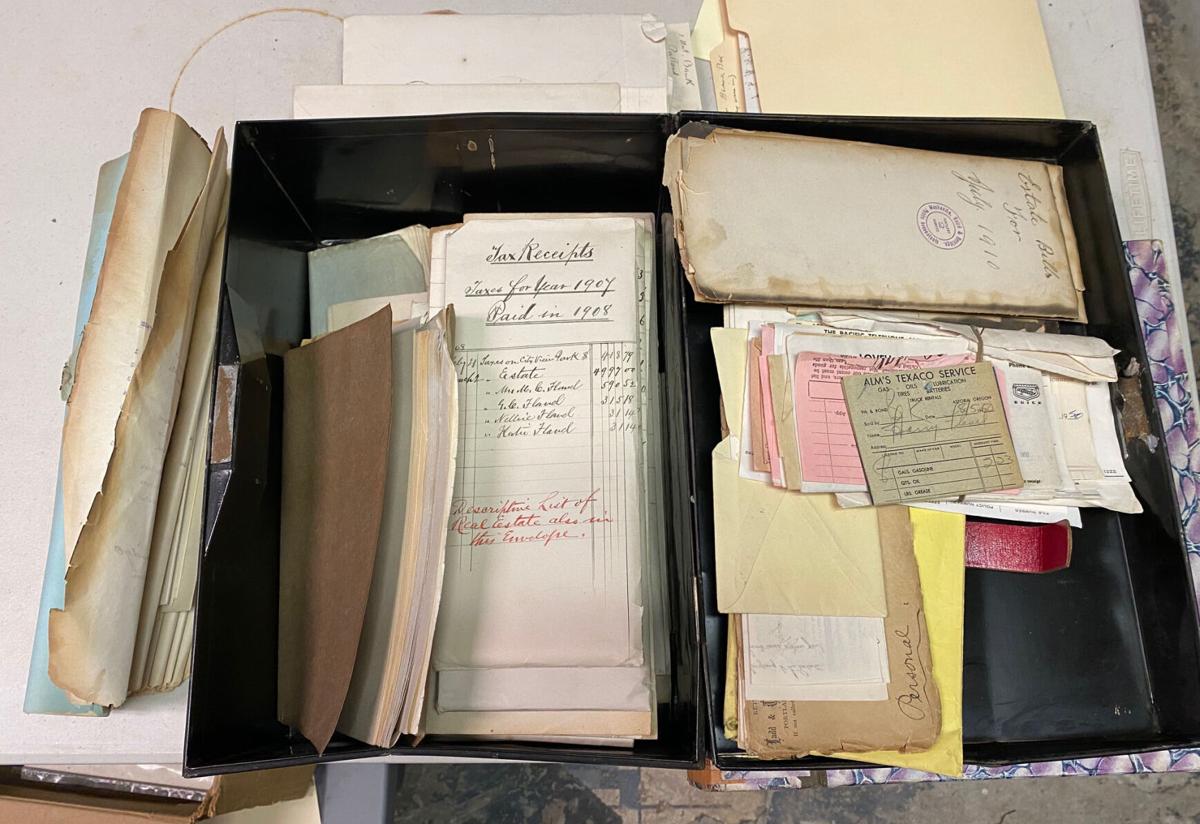 The black box an anonymous person brought to the Clatsop County Historical Society containing documents of the Flavels reaching back to the 1850s. 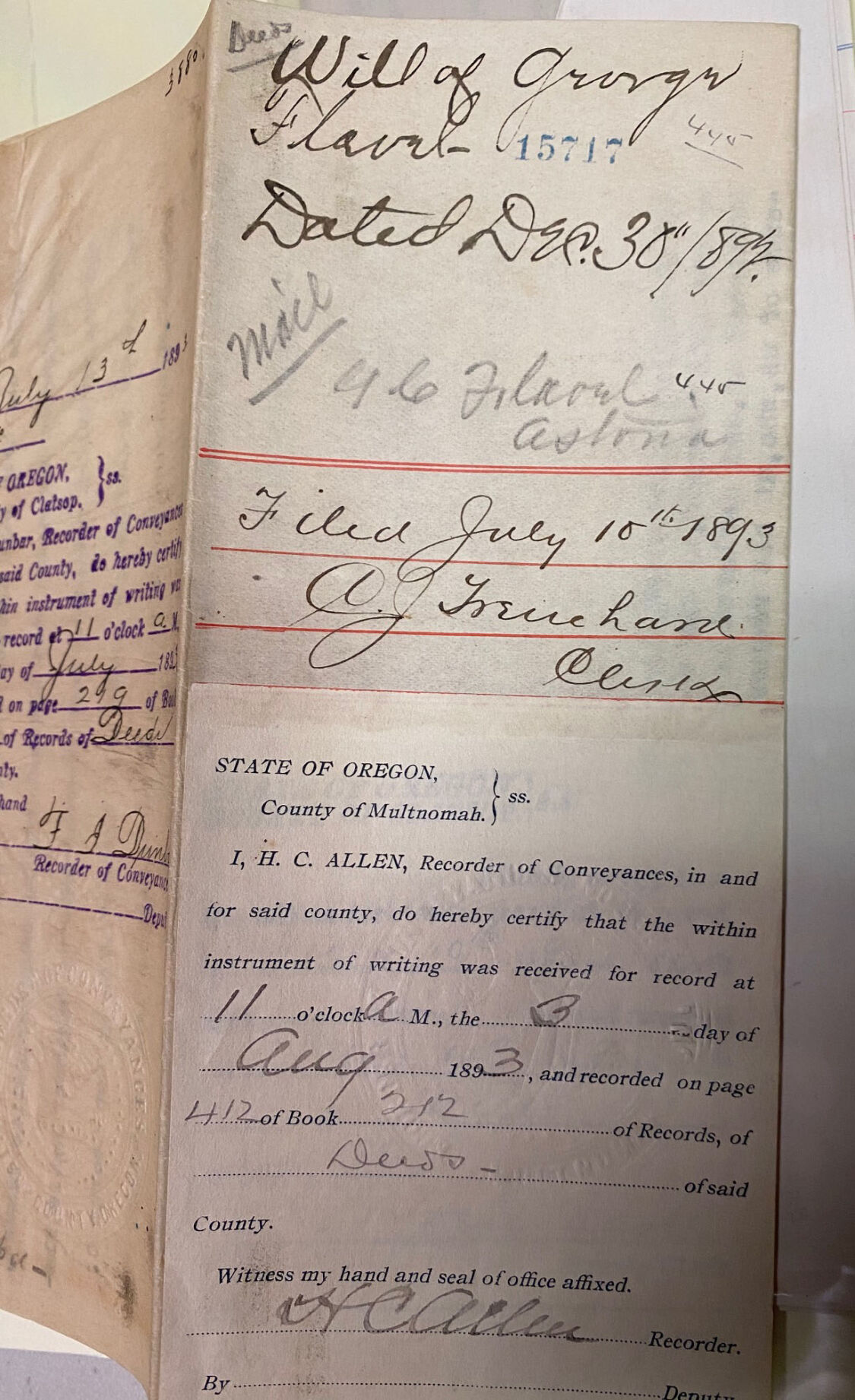 The will of Capt. George Flavel. 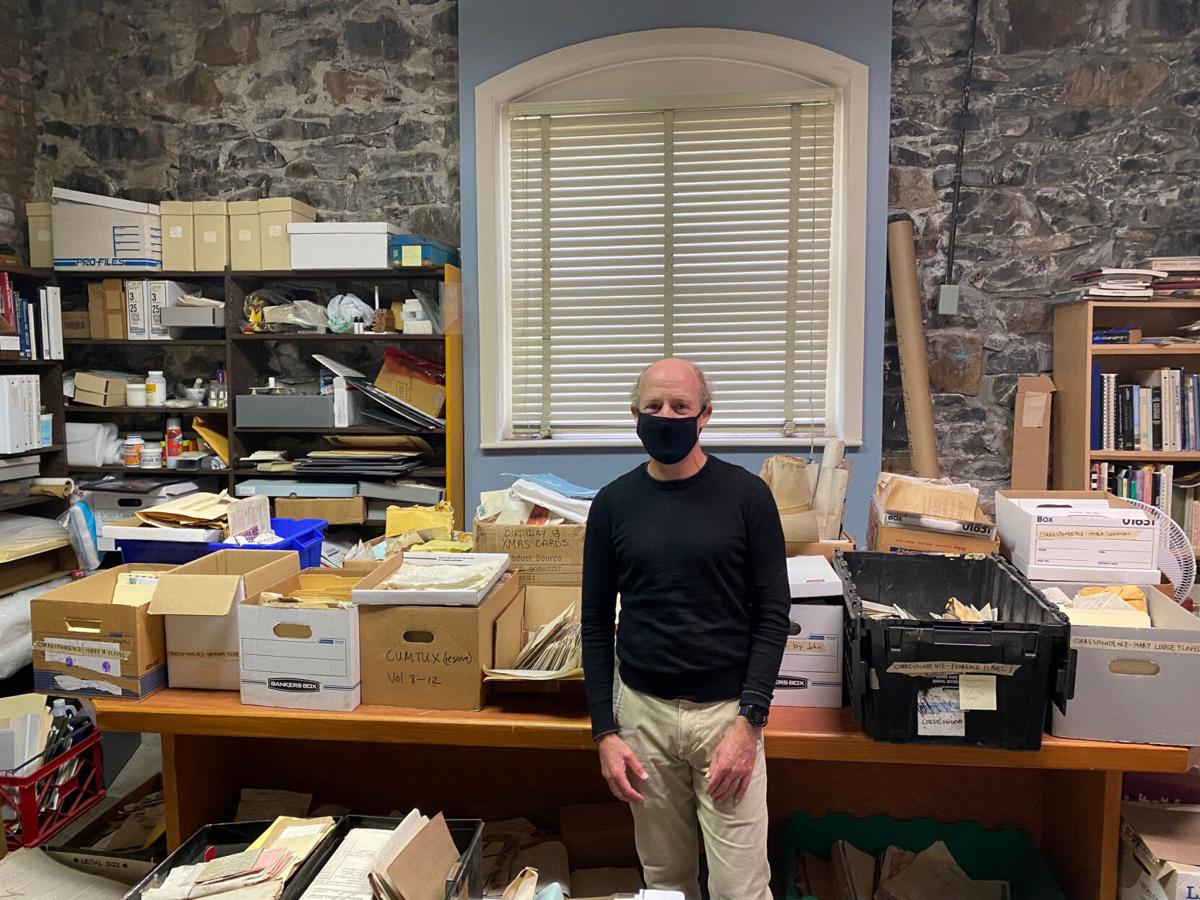 John Goodenberger works in the basement of the Clatsop County Historical Society.

What could a couple of receipts, Christmas cards and a list of supplies to build a house tell you about someone?

For the Flavels, a name synonymous with Astoria, it tells their story as it’s never been told before.

In the bowels of the Clatsop County Historical Society lie thousands of papers from the family — letters, business documents and newspaper articles — some dating back to the 1850s and signed by President Ulysses S. Grant.

John Goodenberger, a lifelong Astorian, is creating an anthology on the sometimes controversial family driven by what they left behind.

“We’ve been talking about the Flavels for decades, now hear the story through their words,” Goodenberger said.

But it is no simple task. Goodenberger’s book covers 170 years.

Now two years in and a couple of chapters deep, the historian has made substantial progress and still has a ways to go. But for him, that’s part of the reward.

“I have waited decades to do this,” he said. “This is my chance, and that is what keeps me focused.”

In the historical society’s basement are dozens of boxes, some sorted, some not, filled with artifacts collected from the George Conrad Flavel home on 15th Street and Franklin Avenue.

Goodenberger will dip his hand in a box and grab an assortment of papers.

Some aren’t completely legible. Some even have pigeon droppings and mold on them.

“You have to go through everything because sometimes there’s some real jewels packed in there,” he said.

Goodenberger sees an artistic quality in the papers that are hard to read.

“The letter literally becomes more toxic as it goes and it just kind of disintegrates and I really like that and I think that’s kind of art in its own way,” he said. “And seeing those things really helps tell the story of the decline.”

He uses a spreadsheet to organize the documents.

The real treasure chest came in the form of a black box that Chelsea Vaughn, the curator for the historical society, found. The box contained about 200 documents, some going back to 1849. It was likely stolen from the Flavel home and brought in anonymously.

Goodenberger said some letters help him understand characters to watch for and clarify preconceived ideas.

“My belief is that we really need to get all of this out into the air just so that people can stop the rumors ... because I think the gossip doesn’t do us any good. It takes away. You don’t need to make things up for this story, it is so interesting.”

Goodenberger works on the project nearly every day.

He keeps a clipboard with a notepad next to his bed for when thoughts come to him.

“I found that it’s just easier to write it down rather than keep thinking about it and not getting sleep,” he said.

But he isn’t working on the project alone.

Along with help from the historical society, he’s received assistance from Sheila Nolan in completing a family tree; intern Brooke Willoughby spent time completing an initial sift of the papers; and Eric Williams is assisting him in research.

“I think people have this idea of what the Flavels are, especially that generation, and since it’s a rare, extensive collection I hope that it can be more of an honest and just raw history of the family,” she said.

The project was born out of a conversation between Jeff Newenhof, the owner of City Lumber, and McAndrew Burns, the executive director of the historical society, on how to honor Newenhof’s brother, Greg, who bought the Flavel home and died suddenly while he was restoring it.

“Greg became a really good friend of the historical society because he had so many interests and questions about the Flavel family history, and I said all too often I didn’t have an answer for him,” Burns said. “And he’d say why not, and I’d say well because we just don’t know, and somewhere in the middle of that conversation, we said let’s get the book written that he would have wanted, the user’s manual for owning that house, and there’s only one guy that can write that book, it’s John Goodenberger.”

“(Bloodsucker) is an insult that was supposedly said to the captain by a particular person and that insult went generation after generation,” he said.

But he doesn’t even know if it is true.

“I’m kind of documenting that. I don’t know it’s true and certainly whether or not he said it. I can find an account in a newspaper of him being called that, but it wasn’t him, it wasn’t the person who’s been blamed all these years for saying it,” he said. “So again, I want that kind of rumor and all that trouble through this, but in the end I want to be able to clear up some of that.”

Goodenberger wants the letters to lead the story.

The book is divided into three segments.

“While I may not hit on all of the greatest hits so to speak, I’m hoping that what I do hit, what I do create, speaks to those other stories, so it’s giving you an example of those other lives,” he said.

He tries to choose letters that are clear and dynamic.

He’s using a diary entry from Nellie Flavel during the 1906 San Francisco earthquake.

“She said to herself, ‘This is an important moment and I need to record it,’ and so she sat down and wrote this. And the way that she wrote it was so beautiful, she’s an excellent writer,” he said.

Goodenberger also hopes to show different perspectives of the family.

One thing that surprised Goodenberger was the bluntness in the letters.

“The Flavels, in general, at least publicly, are tight-lipped, but here in their letters they have things to say to each other, and I find that really interesting,” he said.

One letter from Florence Flavel to her husband says to “please burn this letter” after reading. He didn’t follow her instructions.

On a recent day, Goodenberger’s word count stood at 82,404 words — equivalent to about 200 pages.

He speaks with a passion for and weariness of the expansive nature of the Flavel story.

“I really like the people. That’s my big deal. I like the human element of it,” he said.

“One of the things that I really hope to show is that the Flavels really did lead pretty incredible lives,” he said. “So I want it (to) raise them up a little bit in that way in peoples’ eyes.”

“I want to humanize them ... and take them away from being cardboard cutouts, cartoon characters, and make them fuller people,” he said. “You may not like them in the end. That’s your choice. But at least you can appreciate them as flesh and blood people.”

Goodenberger’s background as a distance runner and cross-country coach helps him break the project into pieces.

To feel like he’s done something, he puts a finished draft of a chapter in a Word document and adds pictures. “I make it look nice,” he said.

He takes his laptop and works on the project around town.

“I’m able to sit on the waterfront and basically do stream of consciousness. I can do a quick draft just to get something done,” he said. “I get to walk, I do a lot of walking and a lot of thinking and trying to create during those walks.”

While Goodenberger is a historic preservation professor, his goal is to not sound too academic.

“I want it to sound natural, and so I kind of have to work at that,” he said.

He sees the project as a jumping off point for scholars to focus on certain parts of the Flavels.

“I feel that the work I’m doing is for future scholars. I’m taking that skeleton and I’m trying to add flesh to it and make those connections in that way so that others can skip that step,” he said.

He also realizes research on the Flavels will never be totally complete.

“It has the opportunity for someone just to say, ‘I’m only going to focus on the WWI period,’ and they have some resources to go in there.”

There are still many boxes Goodenberger hasn’t sorted though yet. “I get exhausted,” he said.

When will it be done?

“Not anytime soon,” Goodenberger said. “I have so many things yet to explore.”