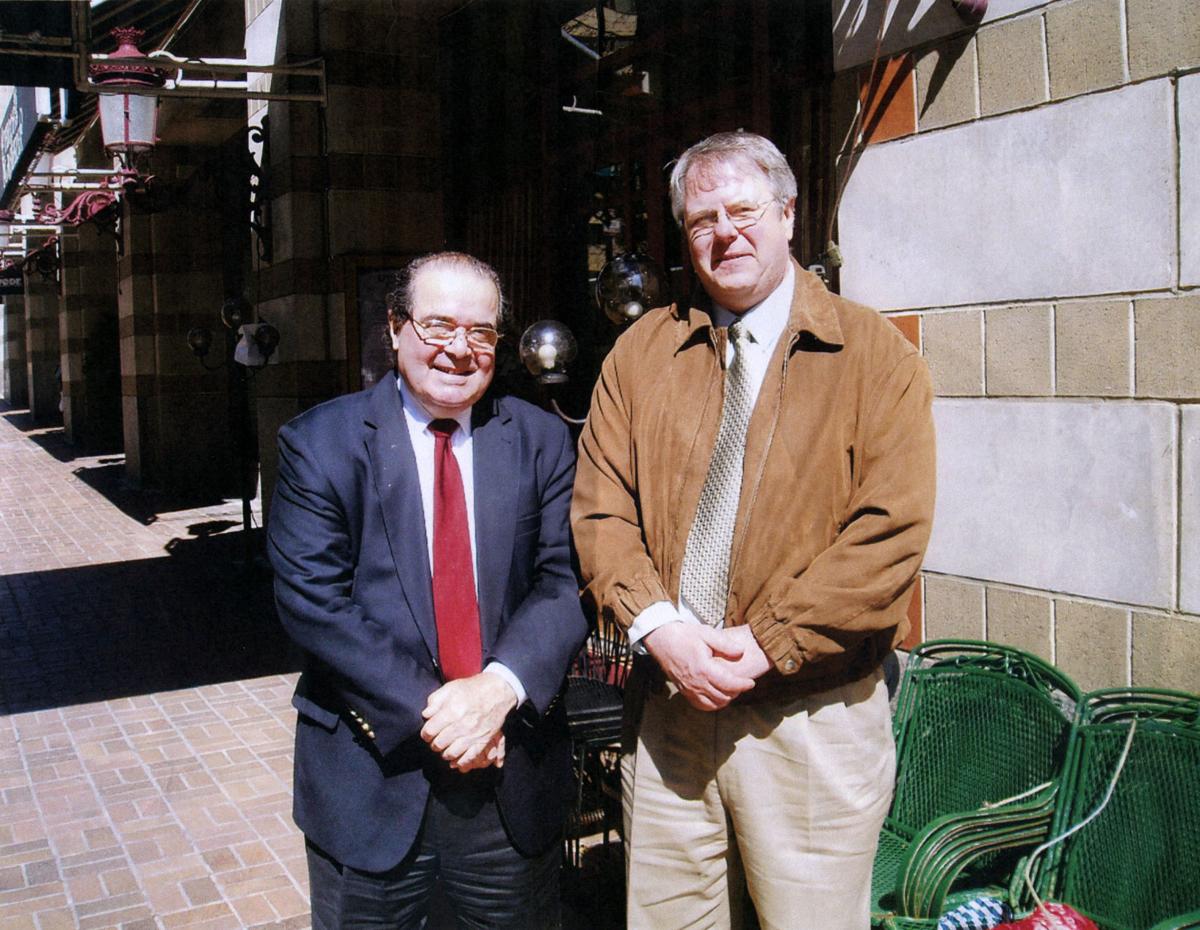 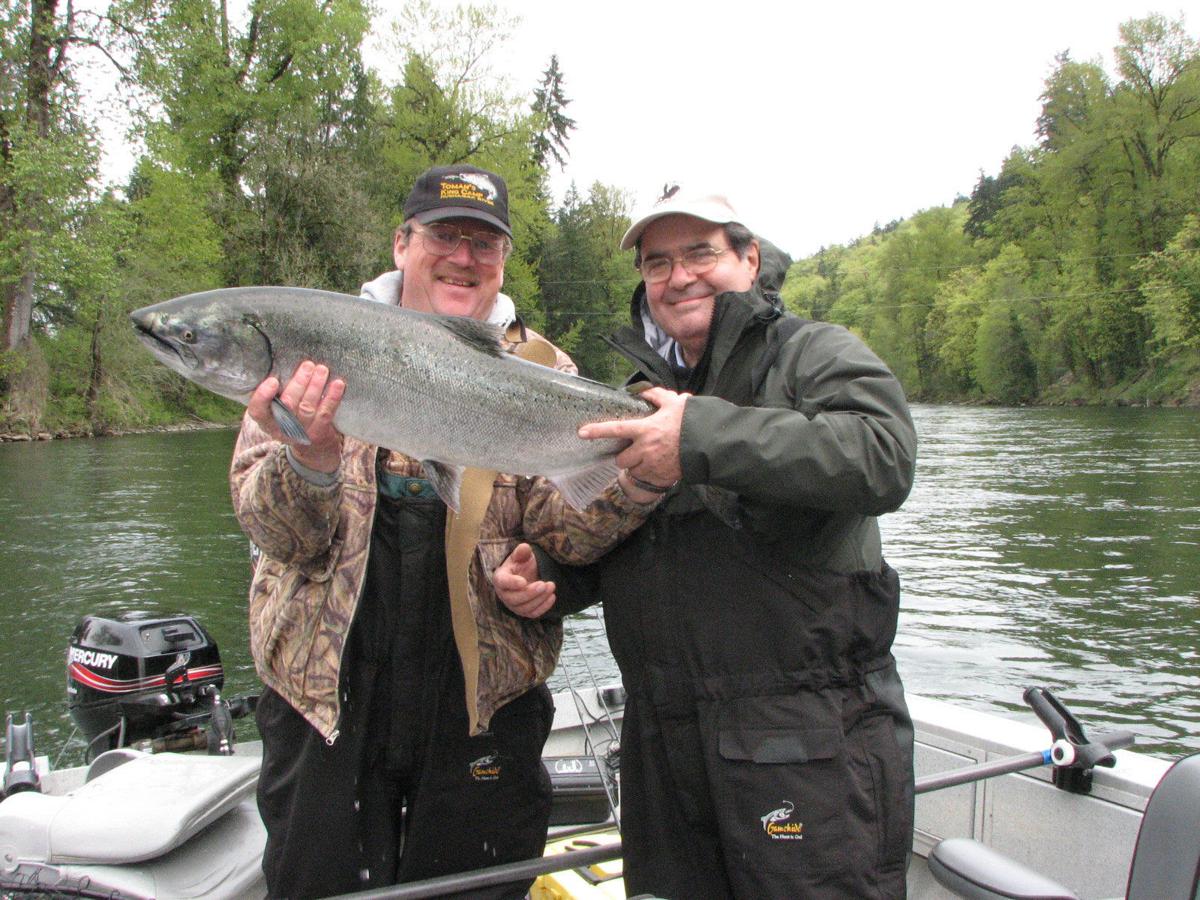 U.S. Supreme Court Justice Antonin Scalia, right, caught a wild salmon on the Clackamas River in 2007 with guide Bob Toman. The judge had to throw the fish back because it was a threatened species. Bruce Buckmaster, an Astoria fisherman, took the photo with Toman's camera.

U.S. Supreme Court Justice Antonin Scalia, right, caught a wild salmon on the Clackamas River in 2007 with guide Bob Toman. The judge had to throw the fish back because it was a threatened species. Bruce Buckmaster, an Astoria fisherman, took the photo with Toman's camera.

U.S. Supreme Court Justice Antonin Scalia snagged a wild salmon on the Clackamas River in 2007, but, unfortunately, the avid hunter and fisherman had to throw the fish back because it was a threatened species.

When Steve Fick heard the story, he sent a fresh salmon to Scalia’s home in Virginia as consolation. There was one problem, though. The judge and his wife were out of town, so when they returned, they were greeted by a rotting fish.

“So I’m the only guy that’s ever sent an Italian Supreme Court judge a dead fish,” Fick, the owner of Fishhawk Fisheries, remembered Monday.

The mix-up was the beginning of an unlikely bond between the Astoria fisherman and the conservative legal lion, who died Saturday at 79 of natural causes while on a hunting trip in Texas.

Fick, who got to know Scalia through attorney Brian Donato, spoke with the judge on the phone, lunched with him in Washington, D.C., and toured his chambers at the Supreme Court, where a trophy elk head was proudly on display.

“That was one of the things we had in common,” he said. “We both have a passion to hunt and fish.”

They were also both sons of immigrants. Scalia’s father came to the United States from Italy; Fick’s from Germany.

Scalia was known for embedding an originalist view of the Constitution in legal philosophy, and while he could be cutting in his opinions, he was often disarming off the bench.

On that visit to Oregon in 2007, Scalia, in a speech at the University of Portland, spoke of applying the “Shakespeare principle” to constitutional law. The judge told the story of a Jesuit high school classmate who was rebuked by a priest after criticizing “Hamlet.” “When you read Shakespeare,” the priest had said. “Shakespeare’s not on trial. You are.”

Fick recalls once telling state Sen. Betsy Johnson, D-Scappoose, who is known for her bluntness as well as her accessibility, that she reminded him of Scalia.

“People talk to you Betsy, and they walk away, and they think, ‘You know, I think I’m Betsy’s best friend.’

“And you walk away with that feeling with him. And it was not an uncomfortable lunch, when you talked to him, it was just friends talking.”

Fick described Scalia as confident, but not arrogant.

“He was very inviting. He was a down-to-earth guy,” he said. “He’s known for his sharp tongue on differing views, but at the same time, he respected those people.

“He had a great sense of humor.”

Fick has kept the note, signed “Nino,” that Scalia sent in 2007 after Fick shipped another salmon to make up for the one that had spoiled.

At a dinner commemorating his 20th year on the Supreme Court, Scalia wrote, Harvard Law School gave him a copy of a handwritten letter, dated June 22, 1844, that Justice Joseph Story had written to belatedly thank a friend who had sent a “superb salmon” months before.

“I could not say better,” the judge wrote Fick. “The fish was a real treat, which my wife and I, and numerous friends, enjoyed enormously. It is rare enough to get a wild salmon, and rarer still to get one that has not been frozen.

“I’m sorry, by the way, for the mix-up that wasted the fish you had sent earlier. Blame it on Brian.”