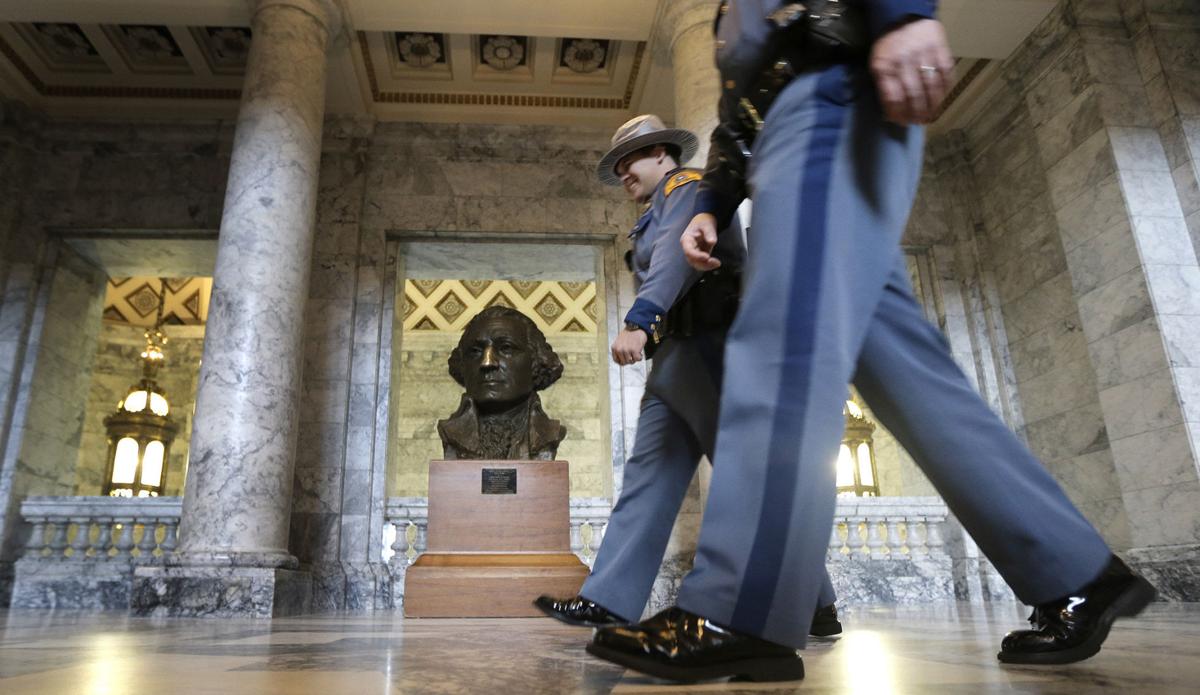 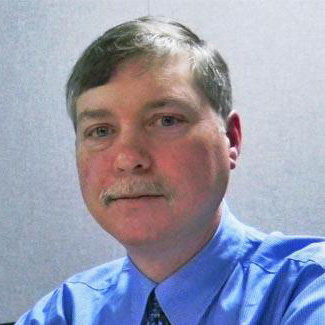 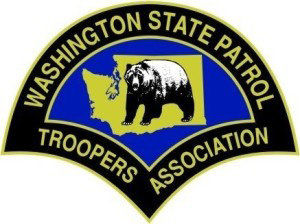 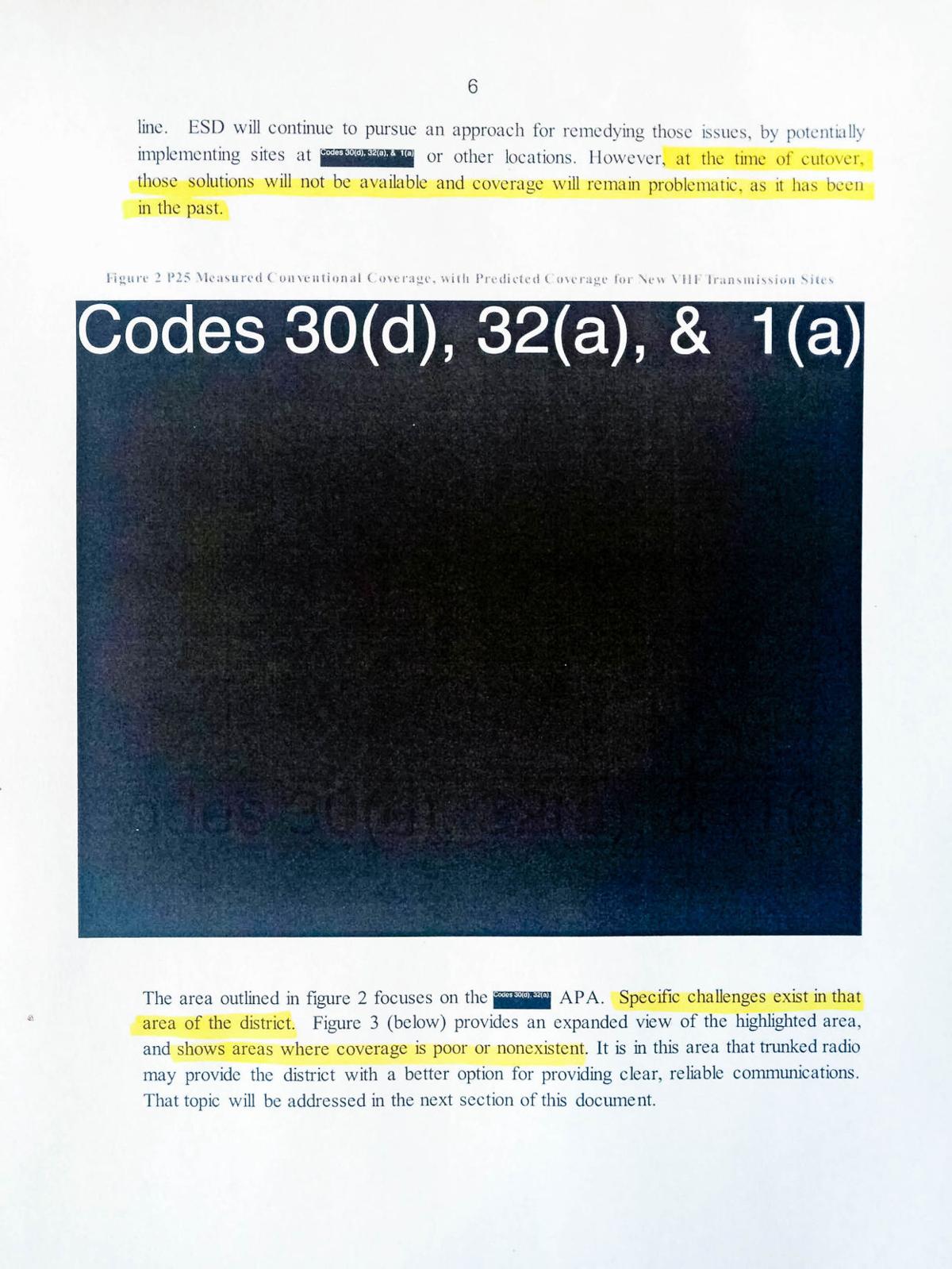 WSP redacted this image of a map that shows how an overhaul of its statewide communications system affects police radio coverage in District 8, which includes Pacific County. WSP officials say that disclosing information about ‘dead spots' could compromise troopers' safety. However, many troopers an increased number of dead spots under the new system is the real threat to their safety.

WSP redacted this image of a map that shows how an overhaul of its statewide communications system affects police radio coverage in District 8, which includes Pacific County. WSP officials say that disclosing information about ‘dead spots' could compromise troopers' safety. However, many troopers an increased number of dead spots under the new system is the real threat to their safety.

LONG BEACH, Wash. — So far, Washington State Patrol’s flawed “P25” radio communications system has cost taxpayers $40 million. Many of the state’s roughly 600 troopers are concerned about paying a more personal price for the new “narrowband” digital radio system — they say it could cost a trooper his or her life.

A critical August Performance Audit from the Washington State Auditor’s Office, and other related public records confirm something skeptics of the ambitious project have been saying for quite some time: While P25 has a lot of bells and whistles, right now at least, it can’t ensure that troopers in rural areas can communicate reliably, or get help quickly. That compromises the safety of officers, and the public at large, auditors said. Many critics of P25 agree.

“Law enforcement has never been a more dangerous profession,” Washington State Troopers Association President Jeff Merrill said Saturday. “To take away our primary tool — a working radio — is tantamount to giving us a gun without bullets.”

In a lengthy report, auditors concluded that the ongoing project, which will cost at least $53 million, has been plagued by missed deadlines, misunderstandings, unanticipated technical problems, a lack of transparency, mounting expenses and underwhelming results.

Of particular concern to local cops, the auditors found that in some rural areas, including parts of Pacific and Wahkiakum counties, coverage has actually gotten worse. Certain new features don’t work reliably, or don’t work at all. Other local agencies, which are all still using older analog systems, can no longer hear troopers over the radio, so troopers now have to rely on a network of state and local dispatchers to convey calls for emergency backup. Critics of the project think this dangerous communications gap could also widen the cultural gap between state cops — Department of Fish and Wildlife and Department of Natural Resources also use WSP’s radio system — and the local cops they work with on a daily basis.

The report found that State Patrol is also asking troopers to fall back on their cell phones when they encounter “dead spots” — a serious concern for troopers who work in areas with poor cell reception.

Local WSP personnel declined to comment, saying they had been directed to refer all inquiries about the audit to the agency’s Olympia headquarters, but other local law enforcement leaders have had plenty to say about P25.

“I think the decision to go with the system they went with was premature, and it was short-sighted. And also a huge waste of money,” South Bend Police Chief David Eastham. “They didn’t take into account the troopers in rural areas, and communications with local officers.”

State Patrol had to upgrade its equipment. In 2004, the Federal Communications Commission ordered U.S. public safety agencies to switch from traditional “wideband” radio systems, to the newer “narrowband” technology by January 2013, but WSP didn’t start seriously working on switching over until about 2010. By then, FCC publications were promising “serious penalties, such as monetary fines or license cancellation” for those who didn’t meet the deadline, so State Patrol leaders had to make a lot of big decisions in very short order.

The reasons for switching to digital were sound. Its existing system consisted of an outdated “mix of older equipment installed without an engineering study” that was “nearing the end of its useful life.” Digital systems will be mandatory within a few years, and they also offer useful new features, such as GPS technology.

However, State Patrol leaders knew they would have to make the change on a shoestring. In the early days of the project, leaders told legislators they might be able to complete the job for as little as $40 million, but even the allotted $53 million is a pretty modest budget for updating thousands of mobile and personal radios, as well as dispatch consoles, radio towers, receivers and repeaters all over the state. Oregon spent at least $230 million to upgrade its system. Pierce County alone spent $56 million, and King County is in the midst of a $270 million project, according to the Auditor’s Office.

Government bodies are usually required to solicit bids for big projects, to ensure that they get the lowest possible prices. At first, WSP did plan to draft a bid request. But in 2011, the federal Department of Justice offered to let WSP “piggyback” the P25 system on its own “Integrated Wireless Network” — a Motorola radio system that provides communications infrastructure for federal agents, mostly along the state’s major highway corridors. State Patrol officials saw it as a way to shave time off of the project, and save about $12 million. Their previous collaborations with Justice had been successful, and WSP wanted to preserve the good relationship. So in 2012, State Patrol decided to merge with Integrated Wireless Network, and awarded the contracts for radios and infrastructure to Motorola without seeking bids.

The decision was legal because only Motorola offered certain proprietary features that WSP wanted, but auditors concluded that it was not in the best interests of taxpayers, or public safety, because it prevented State Patrol from exploring other approaches and products.

Making matters worse, WSP did not obtain data about the network’s actual capacity, and “… did not recognize upfront that Motorola’s proposed system design would not enable it to communicate with some local law enforcement agencies,” until after the contracts were signed. When State Patrol realized the significance of these oversights in mid-2012, it had to “significantly revise” the project design, adding more than $3 million to the cost, and “… adding years to the project, and shifting responsibility for mitigating coverage issues for a large part of the system from Motorola to the Patrol.”

Project managers made the decision despite considerable opposition.

“Legislators, the WSP Troopers Association, and competing vendors all expressed concerns about how the Patrol’s radio narrowbanding project was planned, the benefits of the merger with the DOJ’s IWN system, how the contract was awarded, and whether more project funds were needed for a successful transition,” the audit said.

The FCC mandate to modernize public safety communications systems was largely driven by a post-9/11 realization that responders need to have reliable, shared, (or “interoperable”) radio systems. But ironically, by the time State Patrol joined the network, feds had already decided to stop upgrading or expanding Integrated Wireless Network, saying it had failed to create a reliable interagency network, due to an ineffective, fractured structure, and unstable funding sources. In 2007, federal auditors said the network “… may not be adequate in the event of another terrorist attack or natural disaster that requires a coordinated emergency response. …”

Furthermore, state auditors said, “… because of a recent vendor protest, DOJ has stopped purchasing services, equipment and infrastructure from Motorola.”

One of the big draws of P25 was that it would allow for “trunking,” a technology that scans radio frequencies, allowing officers to communicate more or less seamlessly as they move through both physical space and jurisdictions. Legislators told SAO they approved the project believing it would maintain, or improve upon existing coverage. Merrill, the president of the Troopers Association, said it hasn’t worked out that way, because the Motorola system was not designed with the limited infrastructure and remote, hilly terrain of places like KM Mountain, the Willapa Hills, or Naselle in mind. While analog traffic fades as the signal gets worse, digital radio traffic just abruptly blinks out, creating “dead spots” that often overlap with areas of poor or non-existent cell phone reception.

“One of the biggest issues that we have in District 8, and particularly in the area around Pacific County, is that there is not a lot of existing infrastructure,” Schwent said.

Previous WSP requests for a study of radio coverage across the state had all been rejected, so for P25 planning, the patrol mostly relied on a cost-saving combination of computer-generated “coverage forecasts” that have accuracy issues in hilly places, and limited on-the-ground testing in specific spots.

It’s hard to say exactly what troopers in District 8, which includes Pacific, Wahkiakum, Grays Harbor, Clallam, Jefferson, Kitsap and Mason counties, have experienced since switching to P25 in late spring. Citing security concerns, State Patrol has been very circumspect about how coverage has changed — when the Chinook Observer requested a local project report, State Patrol covered the “before” and “after” maps with big, black blocks of ink. That report warned that it was “important to note that some specific issues will remain in …” but the information about what problems would persist, and which parts of the district they affected was redacted.

According to Schwent, and spokesman Kyle Moore, the majority of problems that troopers have complained about existed long before the switch to P25. However, they couldn’t say exactly which, or how many local dead spots predated P25.

“We did not have a baseline of the what the wideband coverage was. We know historically, that radio coverage for that county for the patrol has always been a problem,” Schwent said. He and Moore said it’s a common misconception that P25 was supposed to fix old problems, but that just wasn’t realistic for their budget.

Merrill thinks WSP is downplaying the extent of the coverage loss.

“The agency maintains their position that those were areas that were without coverage already. We’re saying, ‘That’s not true’” Merrill said, adding that in southwest Washington, “There are areas where we don’t have cell phone reception, we don’t have email.”

Before P25, “We had their channel, we could hear them. If they got into a tight spot, we could be en route without them even knowing it, or we could contact them,” Chief Eastham said. “Now if they’re in trouble, they have to contact their dispatch. Their dispatch contacts our dispatch. Our dispatch contacts us. Then the whole thing happens in reverse.” Eastham said it’s unnerving to think troopers could be headed into South Bend on a high-speed pursuit, and he likely wouldn’t be in the loop.

Since P25 went live, there have been about three incidents where South Bend cops believed area troopers might be in trouble, and didn’t have a good way to communicate with them. Fortunately, Eastham said, the troopers have all turned out to be fine so far. But he wonders if there will eventually be a serious, preventable incident. And he wonders how the state got so deep into a communications project that has ultimately made it harder for cops to communicate with each other in many parts of the state.

“If they go further into their secret squirrel mode, yes, it will affect the teamwork of troopers and local law enforcement officers,” Eastham said. “… I would have to ask, ‘Why? What is the point of this?’ If they’re going to do this, if they’re going to have even less communication, what is the logical purpose of it?

“We needed to go back to the Legislature to try to secure more funds to meet the needs of the people who work on the road,” Merrill said. “Now we’re stuck between a rock and a hard spot. What are we gonna do? That’s the million dollar question. It’s gonna take a lot of money and a lot of resources.”