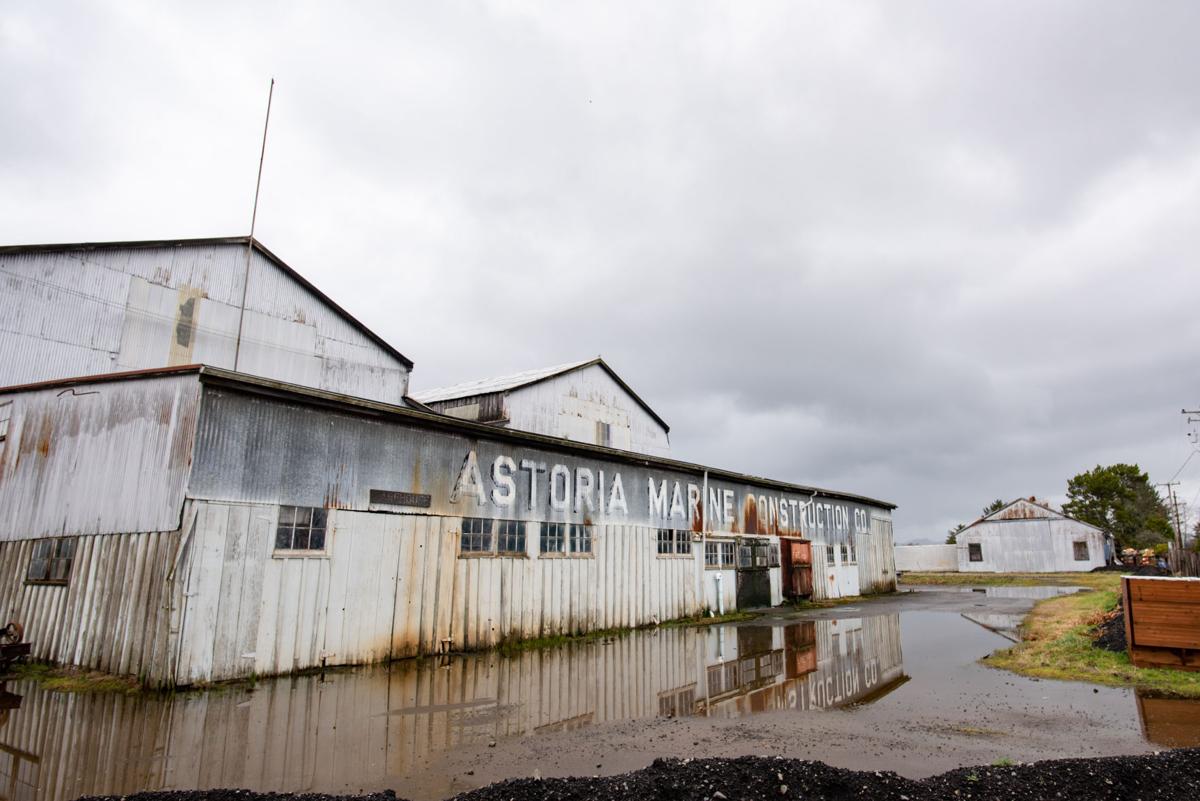 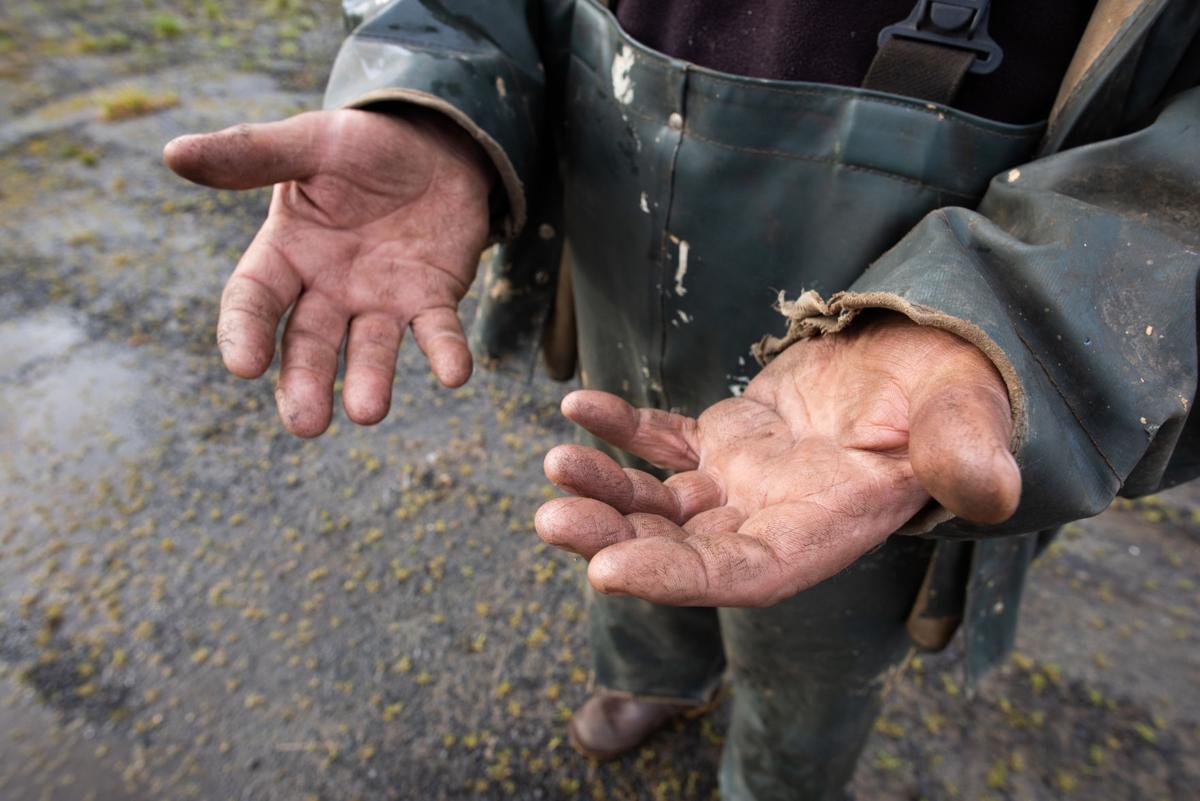 In the shipyard, Tim Fastabend is usually found with his hands covered in grease and dressed in his best rubber rain gear while running from ship to ship doing repairs. 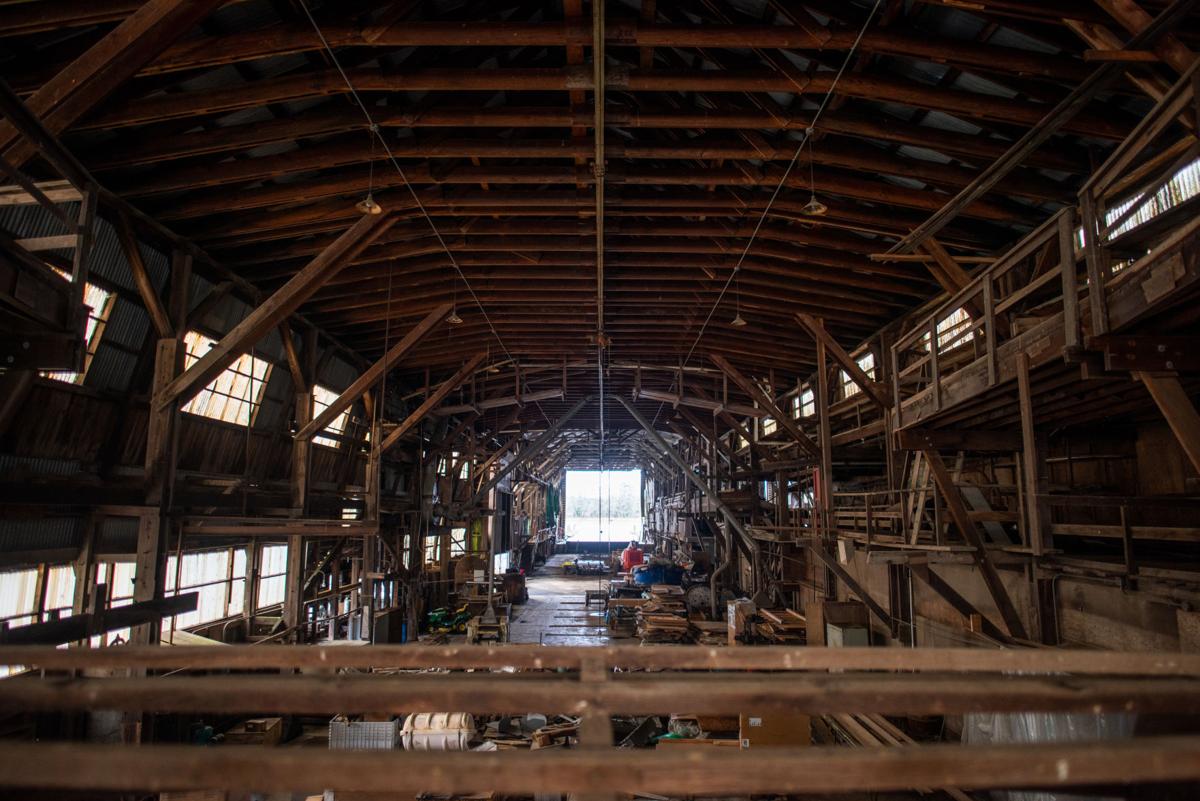 The large main shed that once housed minesweepers and hundreds of workers is now filled with old supplies and a few ships in need of repairs. A large portion of the building will be torn down in the cleanup. 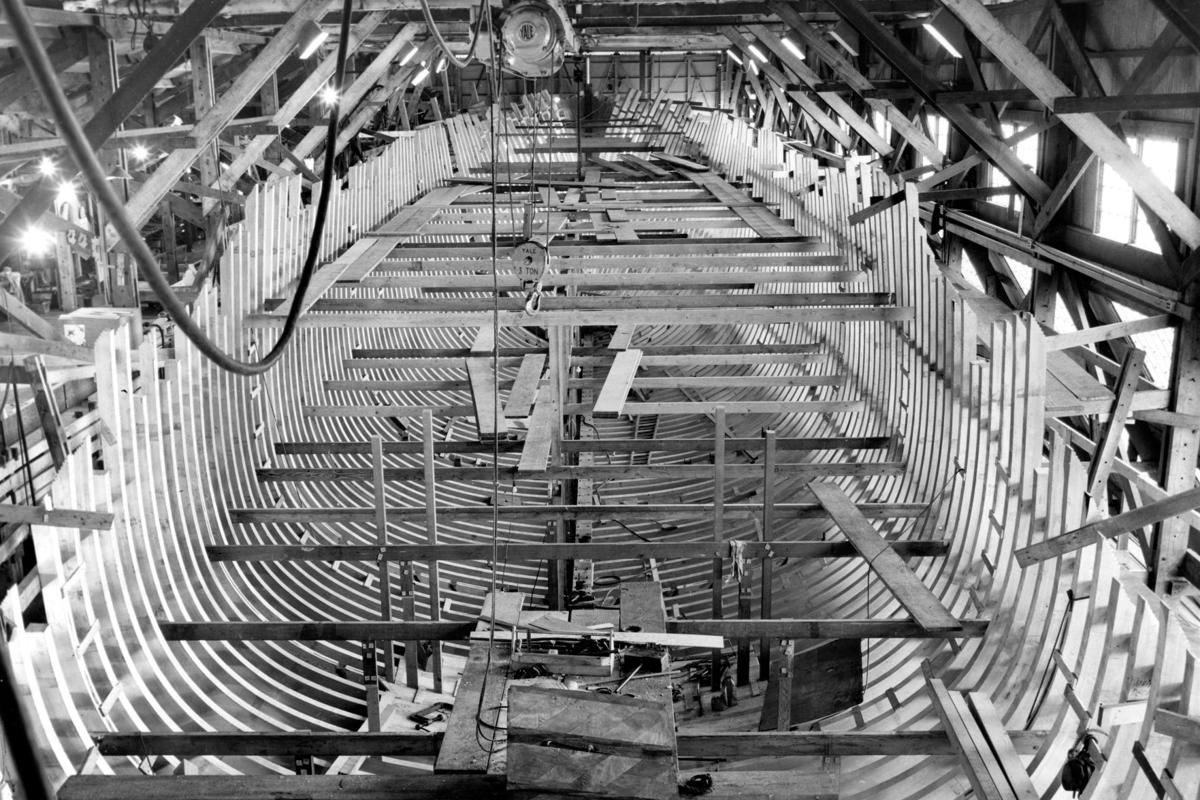 Astoria Marine Construction Co. built a new shed in which to construct minesweepers for the Navy during World War II. 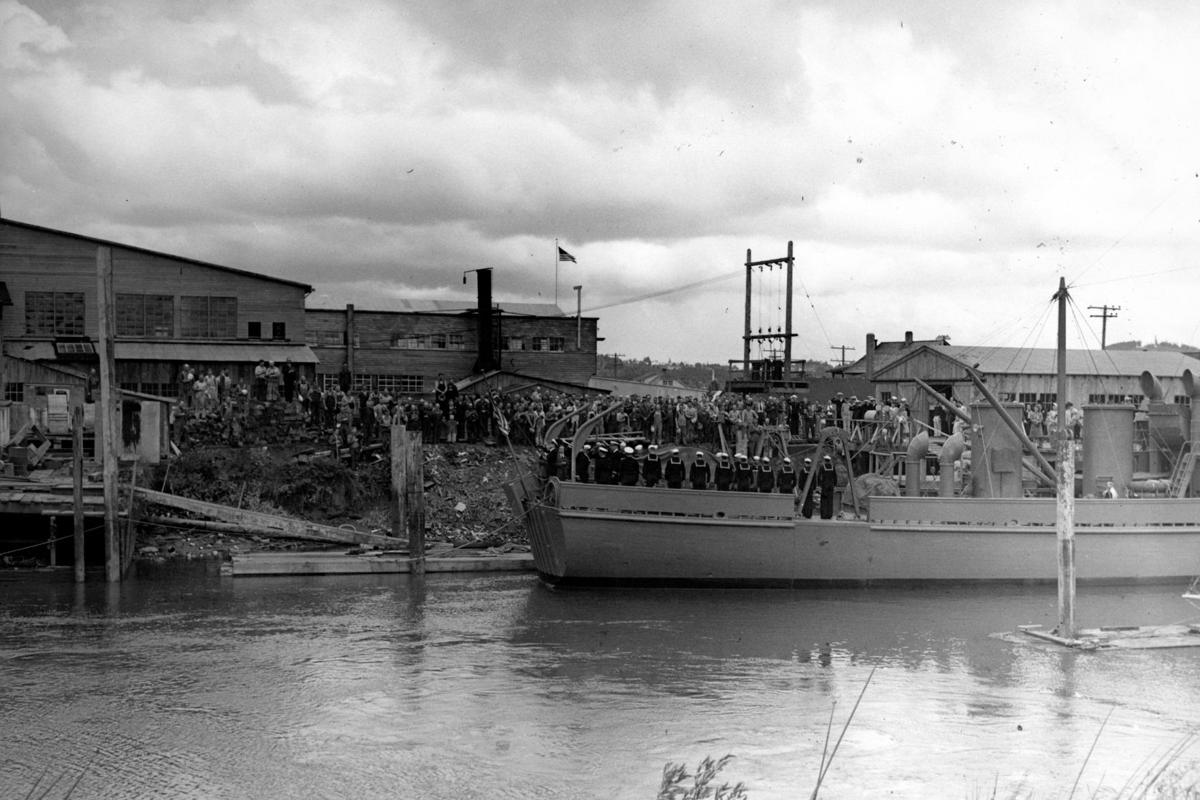 Workers at Astoria Marine Construction Co. gather on the docks for the launch of a new minesweeper in 1942. 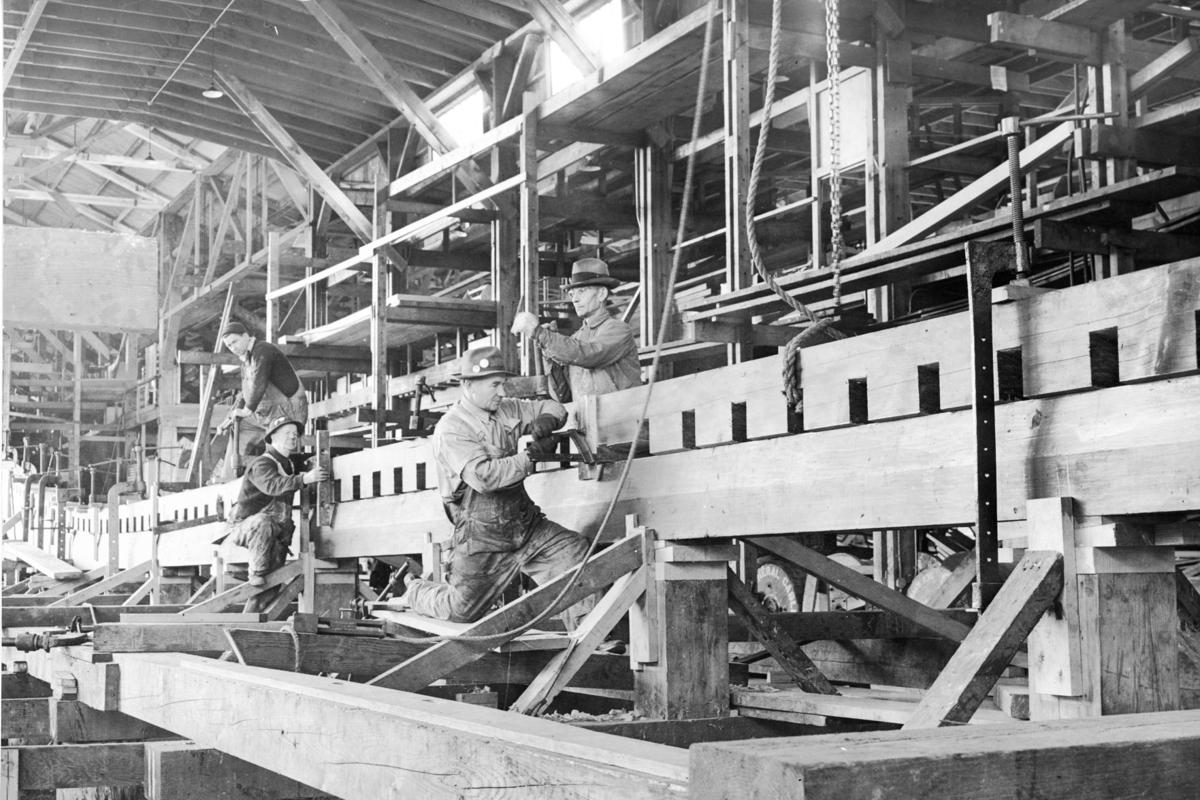 Workers at Astoria Marine Construction Co. lay the keel of a 136-foot minesweeper that served the U.S. and Soviet navies during World War II. 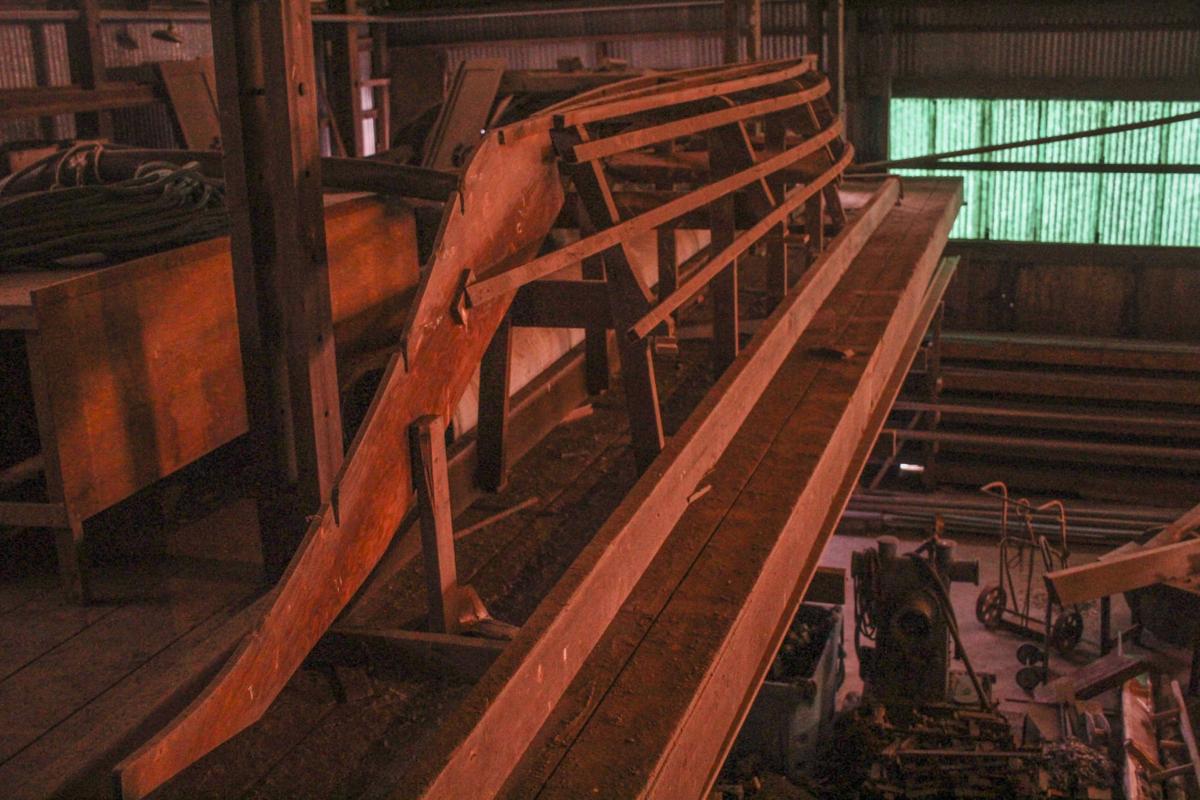 Astoria Marine Construction Co. holds some of the region’s maritime artifacts, including the wood skeleton of the memorial canoe at the Astoria Column honoring Chinook Nation Chief Comcomly. 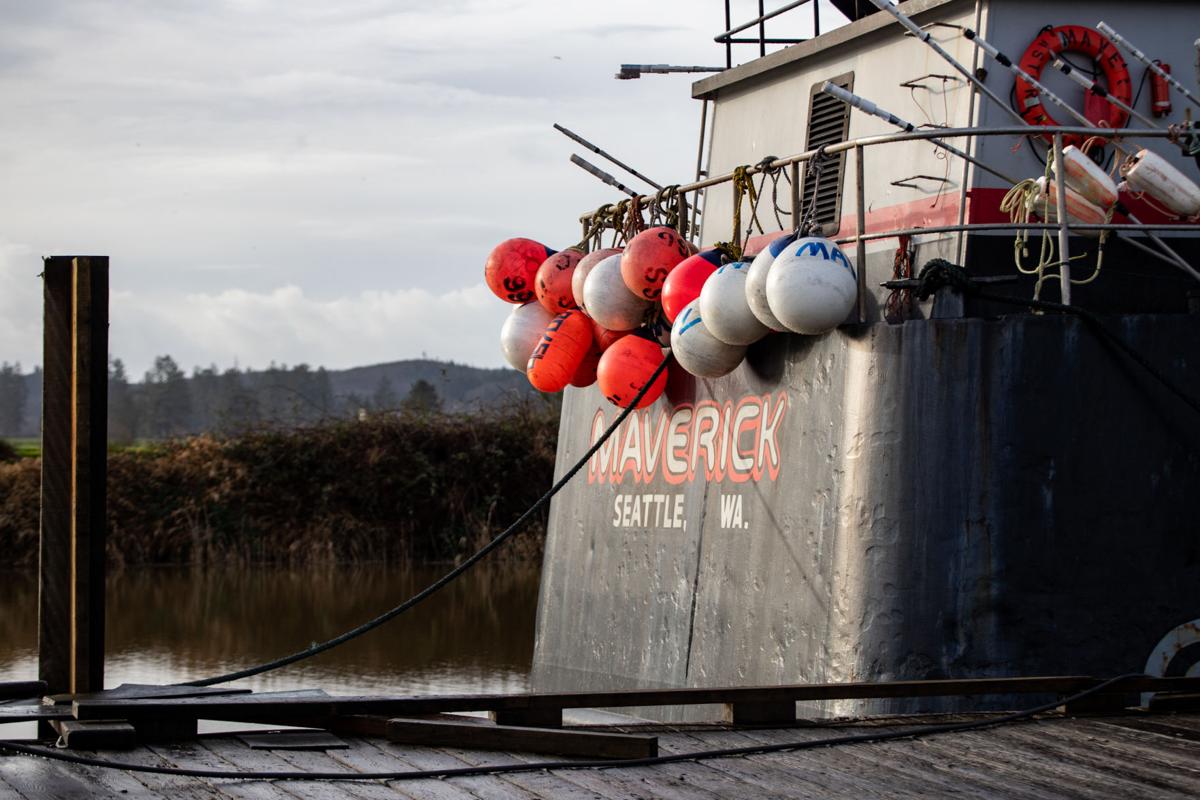 Astoria Marine Construction Co. is doing repairs on the Maverick, a ship featured on the Discovery Channel show, ‘Deadliest Catch.’

Astoria Marine Construction Co. built a new shed in which to construct minesweepers for the Navy during World War II.

Workers at Astoria Marine Construction Co. lay the keel of a 136-foot minesweeper that served the U.S. and Soviet navies during World War II.

Astoria Marine Construction Co. holds some of the region’s maritime artifacts, including the wood skeleton of the memorial canoe at the Astoria Column honoring Chinook Nation Chief Comcomly.

The cleanup of pollution at Astoria Marine Construction Co. along the Lewis and Clark River is slated to begin this summer after more than 30 years of studies, permitting and planning.

The work will take about four months to complete, said owner Tim Fastabend, after which he doesn’t know whether his company will continue.

Clatsop County recently approved a flood plain development permit for Astoria Marine, clearing the way for the cleanup to begin. Fastabend said the company has already started demolishing parts of its sprawling campus, expanded during World War II and the Korean War when it was a preferred contractor to build wooden minesweepers for the U.S. Navy.

Environmental investigators, who started looking into the shipyard in the mid-1990s, knocked the company for spills and sandblasting of paint containing hazardous materials like copper, lead, chromium, arsenic and other chemicals. They also pointed to leaks and spills from oil storage tanks and engines, resulting in petroleum contamination around the property. The company also burned lumber, debris, excess solvents, fuel and oil on-site.

Most of the outbuildings on the campus will be torn down, abandoned boats removed and shipways disconnected from the Lewis and Clark River.

Contractors will demolish about half of the iconic, yawning double sheds once used as covered shipways to lay the hulls and build the superstructures of warships. They will extend a dike along the Lewis and Clark through the middle of the shipways, removing old pilings and piers to improve tidal habitat.

More than 1,000 cubic yards of contaminated soil from burning areas will be removed, replaced and capped with gravel and sand. The property will be graded and drained into a bioswale to treat stormwater runoff.

Fastabend, who has grown cynical over the expensive cleanup process and the slow demise of his company, expects the major work to largely begin in June and wrap up by mid-October before long-term monitoring begins to assess the cleanup’s success.

“And then, it will be a wonderful world,” he said during a recent tour.

Shipwright Joe Dyer started Astoria Marine in 1924 as Astoria Shipbuilding with a contract to build 12 gillnetters. The company became known for the manufacture and repair of wooden-hulled fishing and ferry boats, tugboats, and yachts including the 120-foot Tourist III — the flagship of Capt. Fritz Elving’s Astoria-North Beach Ferry Co. — in 1931.

Astoria Marine received its first contract in 1941 to build four minesweepers for the Navy. The size of the yard doubled in a few months, including the large, covered shipways. Employment reached 400 people as the shipyard turned out dozens of warships.

Ships were built on an assembly line inside the sheds, the hull laid farther inland and the superstructure outfitted closer to the Lewis and Clark. Ships launched would go to an inlet of the nearby Jeffers Slough, nicknamed the “pothole,” for the finishing touches before sea trials.

“With over 400 guys, we were at our peak in terms of employment and production,” Don Fastabend said in a 2005 interview with historian David Kanally, who created the website historywithheart.com documenting the company’s past.

Astoria Marine shrunk to a fraction of its previous largesse after the war, dwindling to about 15 workers, Don Fastabend said. By the early 1960s, Joe Dyer contemplated closing the yard.

Dyer instead let Don Fastabend and several partners take over. By 1975, only he was left. In 2003, Tim Fastabend stopped fishing in Alaska to come help his father, who died in 2013.

Fastabend, who turns 66 in a couple of weeks, vacillates between whether to keep the shipyard going or shut down after the cleanup. The budget for the work has ballooned from $1.5 million in 2015 to $3.8 million. With around $6 million spent on studies and testing, Fastabend estimates the company will be about $10 million into the cleanup process, much of it paid for by old insurance policies from the 1940s and ’50s put into an escrow account.

What doesn’t go into the cleanup goes to the U.S. Environmental Protection Agency. The company will also pay $100,000 to the state for oversight costs, while the state will wave $40,000 worth of past and future oversight. The Columbia River Estuary Study Taskforce is also receiving $75,000 for restoration projects in Youngs Bay.

After the cleanup, Astoria Marine will be released from further liability.

“It’s like, really how much effort do I want to put into it” afterward, Fastabend said. “The regulations today are so complicated and expensive to deal with anything.”

A sad part is the younger shipwrights who had interest in keeping the business going, he said. Some of his former employees have gone to work for emerging companies like WCT Marine & Construction. More of the region’s shipping fleet has been going to the Port of Toledo, which constructed a new haul-out facility and boat lifts, or north to Westport, Washington.

Fastabend doesn’t know what he’d do if not for Astoria Marine, where he still runs around working on boats moored in the pothole. Aside from the shipyard, he coaches girls soccer for Astoria High School. He sold his fishing boat two years ago.

“Maybe that’s the answer,” he said of his future. “Go fishing.”