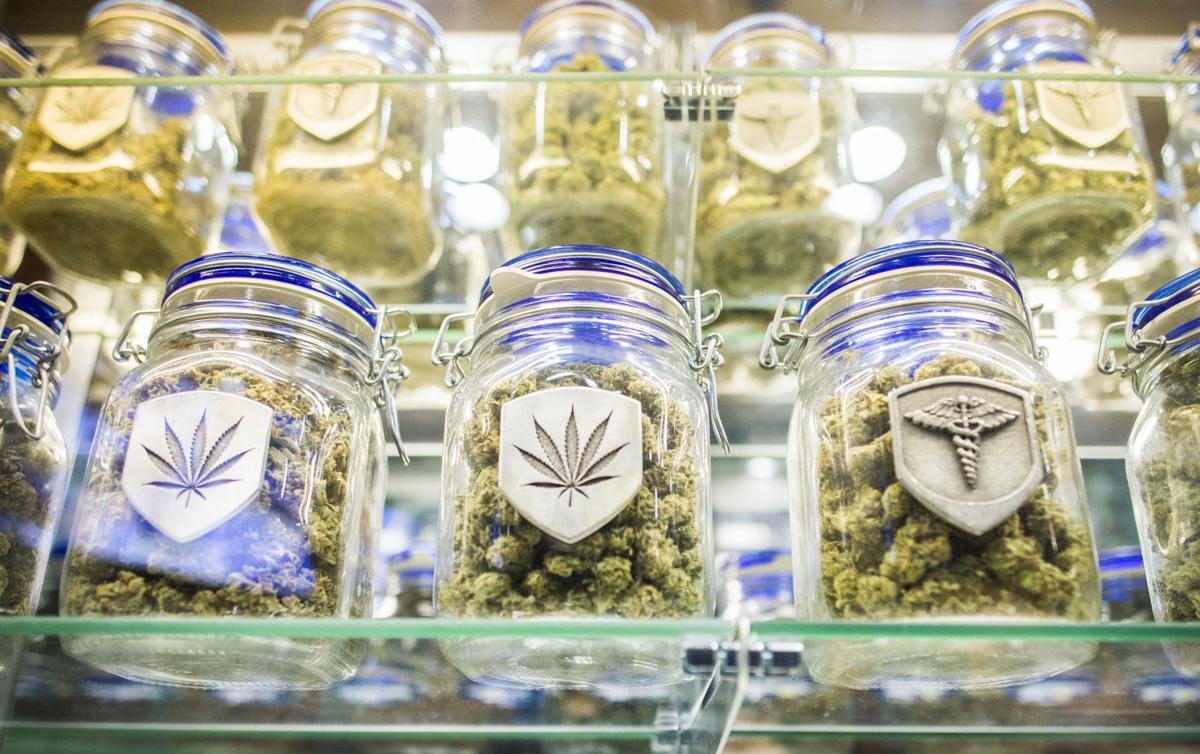 Jars of marijuana sit in a display case at Sweet Relief on Oct. 1. 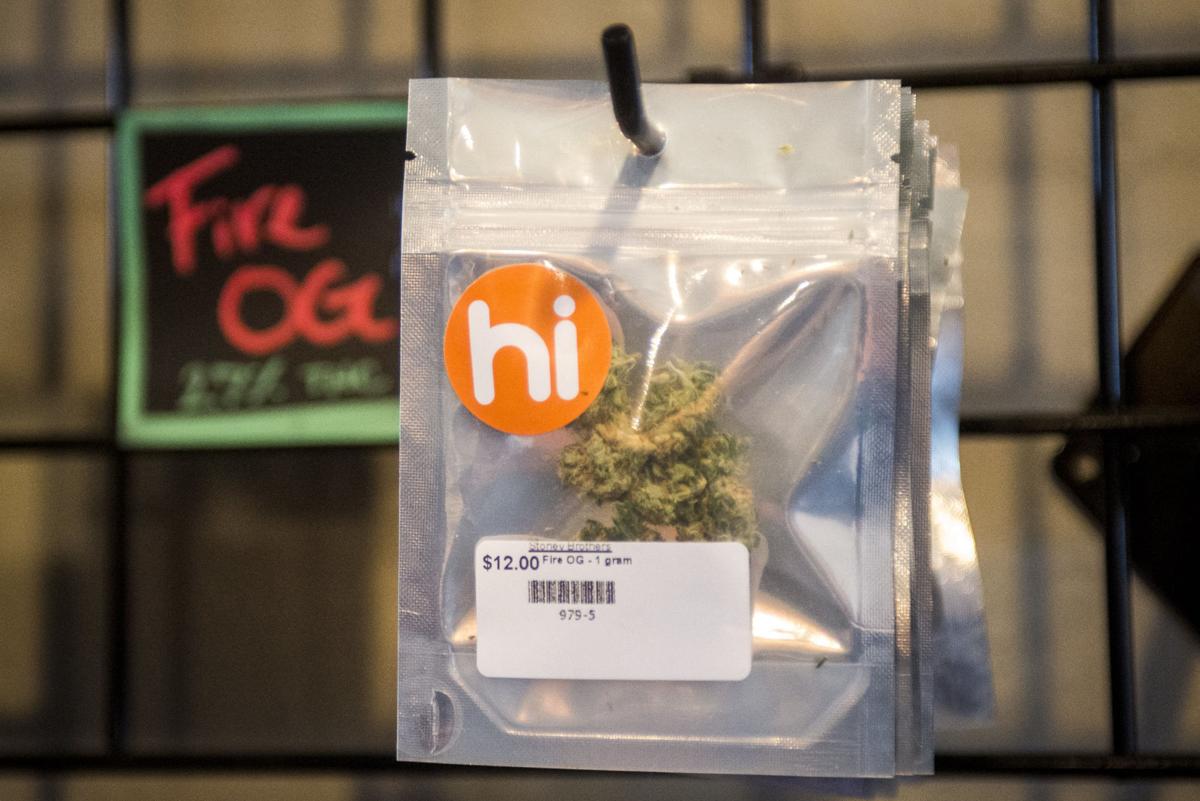 Packages of Fire OG hang on the rack at Hi. 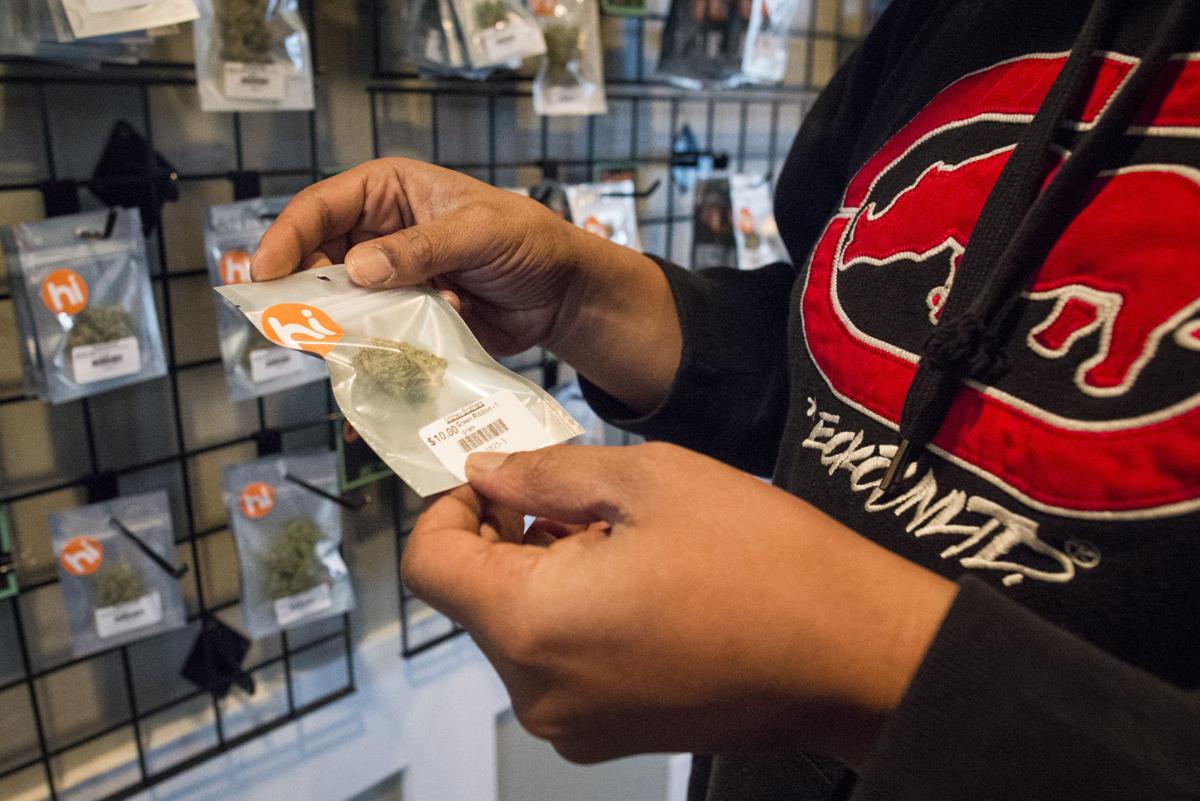 Raja Afrika, an employee at Hi, holds a1-gram package of Green Ribbon. Afrika is glad his customers no longer have to “do shady back-alley deals.” 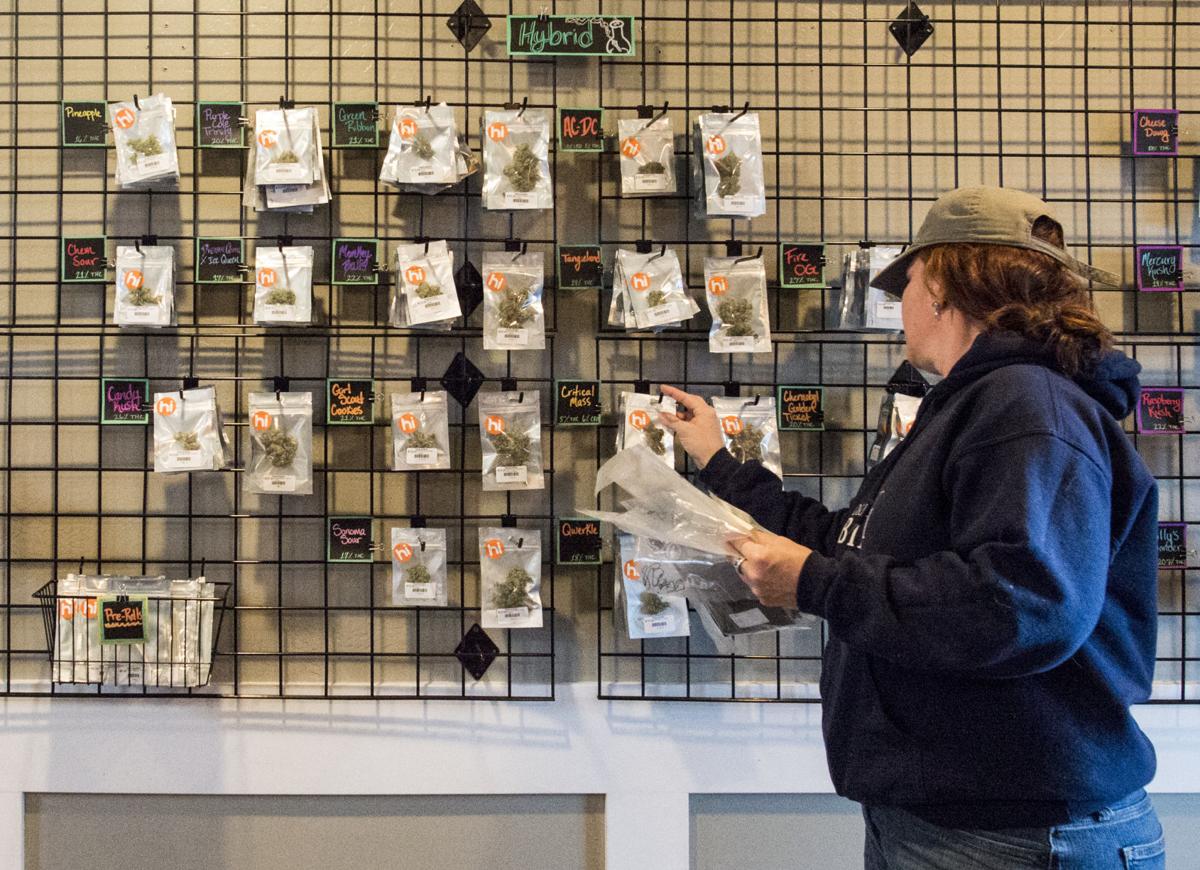 Shavaun Devlin, an employee at Hi, restocks the rack Tuesday. Hi prepackages their marijuana for sale.

Jars of marijuana sit in a display case at Sweet Relief on Oct. 1.

Packages of Fire OG hang on the rack at Hi.

Raja Afrika, an employee at Hi, holds a1-gram package of Green Ribbon. Afrika is glad his customers no longer have to “do shady back-alley deals.”

Shavaun Devlin, an employee at Hi, restocks the rack Tuesday. Hi prepackages their marijuana for sale.

Recreational marijuana sales in Clatsop County have settled at a high plateau after the initial surge that occurred once state law began allowing medical dispensaries to sell the product early last month.

“The wave’s over; we’re just getting a steady flow of people now,” Nick Clark, owner of Nature’s Choice Alternative Medicine in Astoria, said.

Oregon authorized medical marijuana dispensaries to temporarily sell up to a quarter-ounce of dried marijuana to adults 21 and older who don’t carry medical marijuana cards. The law’s passage came days after Measure 91 — which legalized the possession and use of recreational marijuana — went into effect in July.

Nature’s Choice, The Farmacy and Sweet Relief Natural Medicine in Astoria, and both Highway 420 and Cannabis Nation in Seaside, were slammed with customers from day one. It took one to two weeks for the smoke to clear and customer bases to stabilize.

“There was a ton of people that just wanted to do it for the novelty and check things out and were probably not going to be repeat customers, so that obviously went by the wayside,” Steve Geiger, owner of Highway 420 in Seaside, said.

Since then, store “regulars” have declared themselves, with many incorporating the shops into their routine, especially on weekends, game nights and payday. Customers range from construction workers with body aches to service workers who want to sleep better, grandmas and grandpas who haven’t lit up in decades to patients weaning themselves off of opiates.

“Even though it’s ‘recreational,’ quote end quote — just because you don’t have a piece of paper in plastic, a laminated medical card — it doesn’t mean you’re not going to get help (from smoking pot),” Oscar Nelson, owner of Sweet Relief, said.

And, of course, customers include perfectly healthy people who just wanna get blazed and eat nachos.

“I think our store is probably doing wonders for the nacho industry at large,” said Raja Afrika, a budtender at Hi Astoria, the latest dispensary to open in the city.

By the owners’ rough estimates, Nature’s Choice now sees about 60 to 70 people buying recreational marijuana per day; Highway 420, between 50 and 75; Cannabis Nation and Sweet Relief, between 170 and 200 people per day.

“Right off the bat, we saw close to 300 (per day) for a few days, and then it sort of tapered down,” Tony Kelly, general manager of Seaside’s Cannabis Nation, said. “A lot of people were coming in just to get the prerolled joints — ‘joints for a penny’ — that we were doing. So we went through a lot of those.”

The Farmacy declined to disclose how many customers the store sees daily, but co-owner Nick Palazzo said that about 95 percent of them are recreational customers.

Because of demand and increased clientele, Sweet Relief has added the equivalent of five full-time employees. “It’s been amazing,” Nelson said. “It’s just a lot more consumers than I originally imagined.”

The new dispensary on the block, Hi Astoria, opened Oct. 1 and had approximately one customer on that historic day, Will Violett, a budtender, said. But word-of-mouth is spreading, and the store — part of a fledgling franchise — is attracting between 45 and 75 recreational customers per day, he said.

“We’ve been pushing through and becoming more and more like a business,” he said.

Clark said he expects that “tourists next year will play a big part in (the local marijuana customer base), just because we got so many cruise ships coming in,” Clark said. “I mean, even on Oct. 1, we had 20 to 25 cruise ship people.”

Because banks are federally insured, and both medical and recreational marijuana remain illegal at the federal level, marijuana-based businesses have had to get creative in handling their deposits.

“None of the banks want to touch it,” Kelly said. “There are a few credit unions open to the idea. A lot aren’t federally insured, so they can do it without getting that backlash from the feds.”

Some business owners said they rely on stowed-away safes, others on loopholes in the financial system.

“You have to exploit every gap in the traditional way of doing business, within the legal limits, to get around the banking issue,” Nelson said.

Under the current tax code, the Internal Revenue Service doesn’t permit tax deductions or credits for businesses that traffic in controlled substances prohibited under federal law. So dispensaries find themselves working in a business environment that can be less than advantageous to their line of work.

“We’re not able to write off business expenses like a normal business,” Nelson said. “Once we can do business like a regular business, we’ll really have something.”

“We’re still in the infancy stage of all of this, though, so I don’t know how the tax in January is going to affect this,” Nelson said.

Afrika likened Oregon’s legalized marijuana economy to a kind of “gold rush,” with opportunities for growers, bakers, hemp-focused entrepreneurs and others to contribute to the budding industry.

“When I was a kid in the ’80s, I used to play this game called ‘Oregon Trail.’ Many quality childhood hours invested in this video game. And now that I live in Astoria, I feel like I fulfilled the dream of the Oregon Trail game,” Afrika said, adding that he’s glad his customers no longer have to “do shady back-alley deals” to score their drug of choice. “What a great age we live in.”