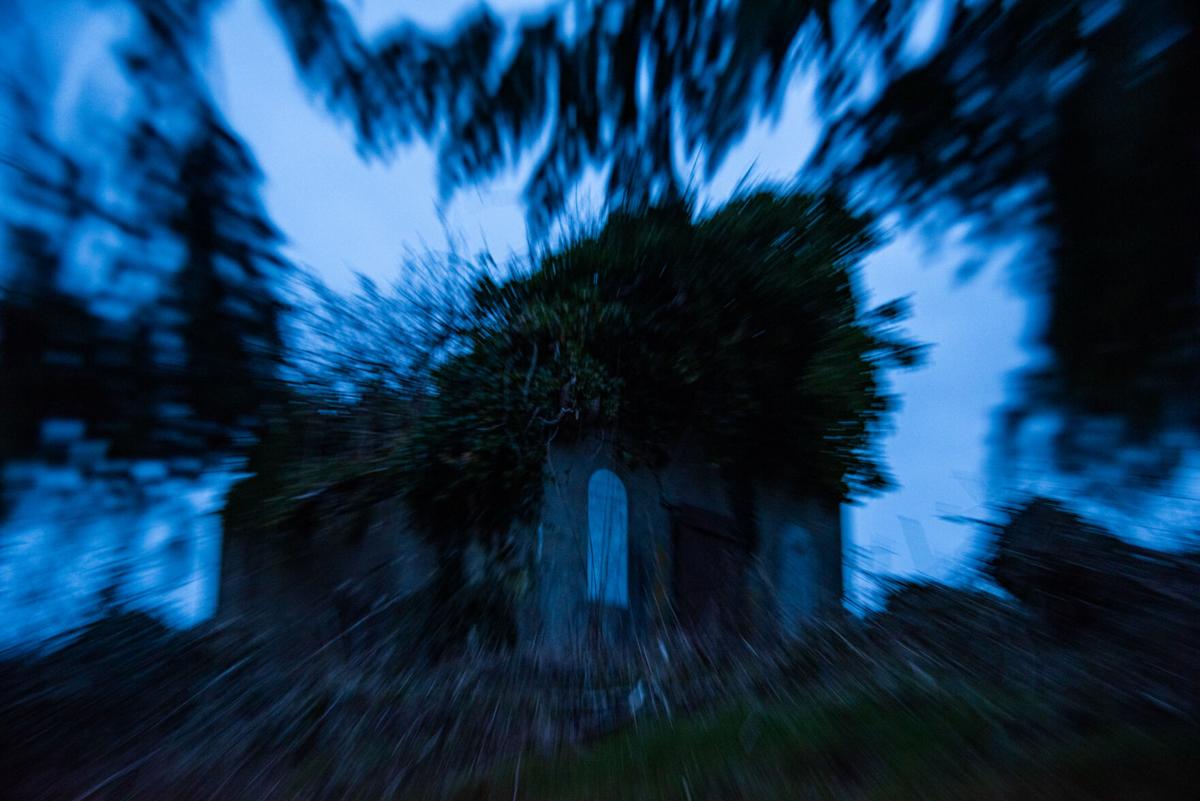 The Shively family has a crypt at Pioneer Cemetery. 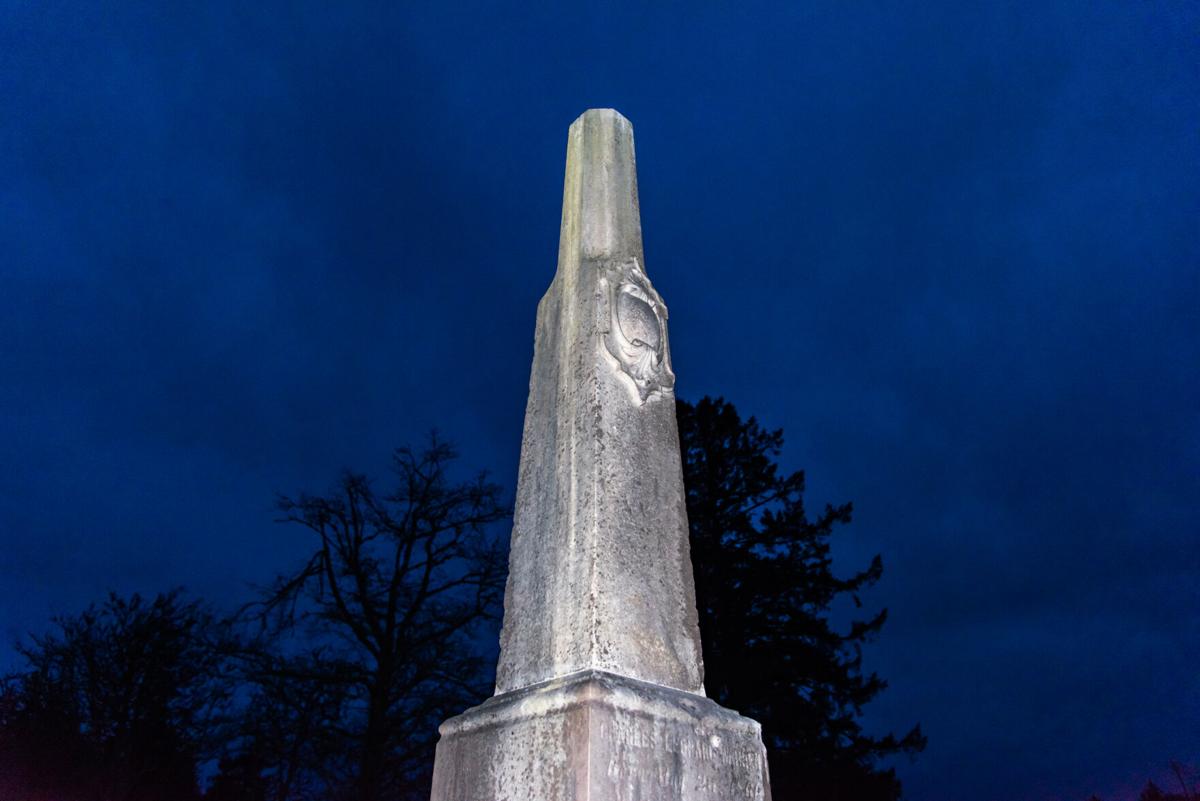 An obelisk for a member of the Warren family is at Astoria Pioneer Cemetery. 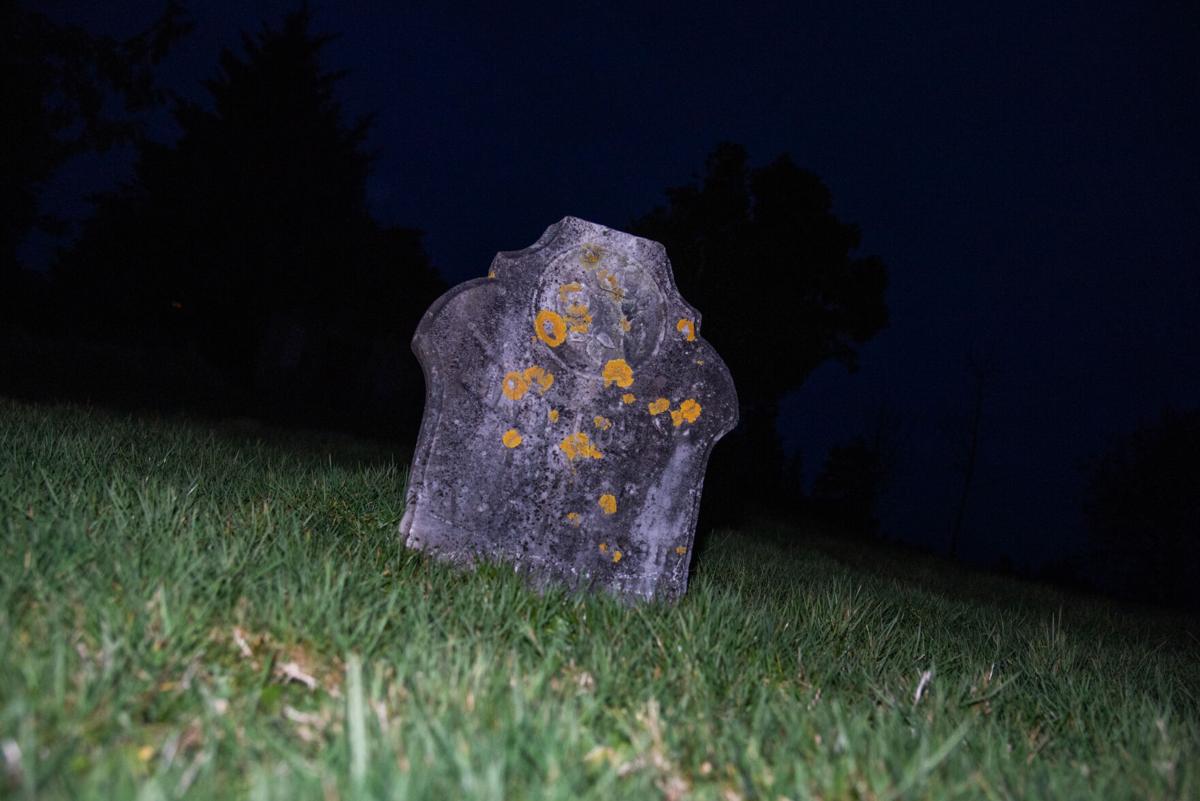 Old gravestones are scattered at the cemetery. 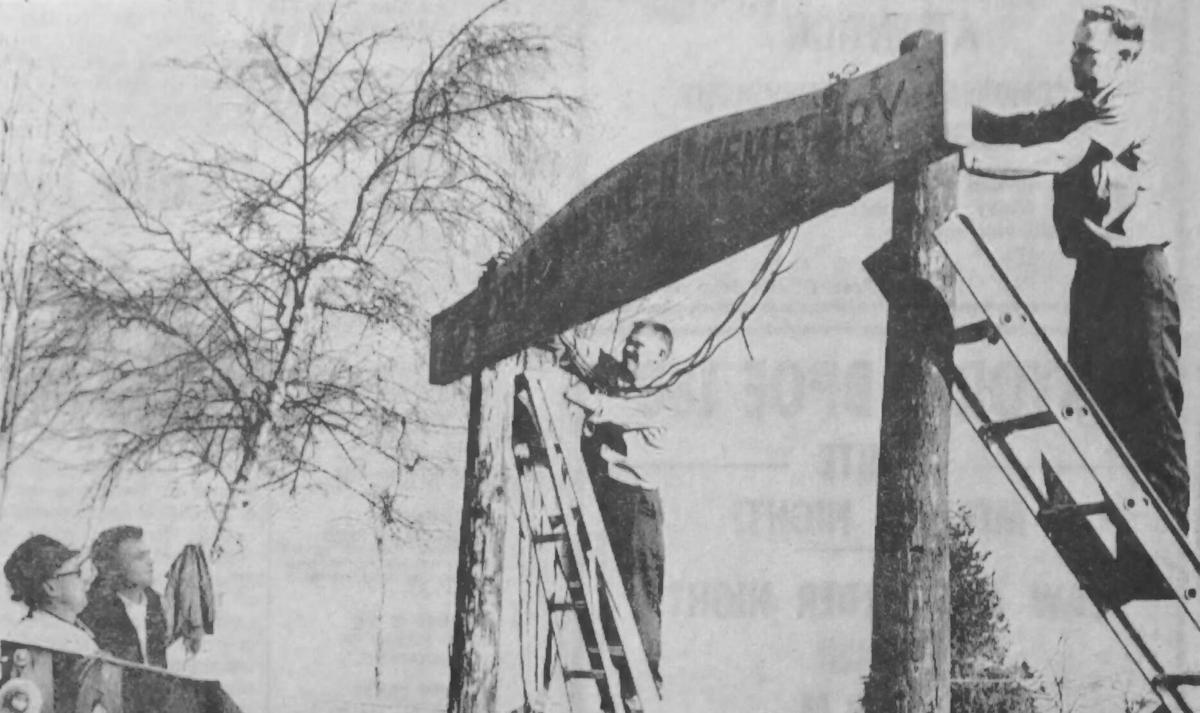 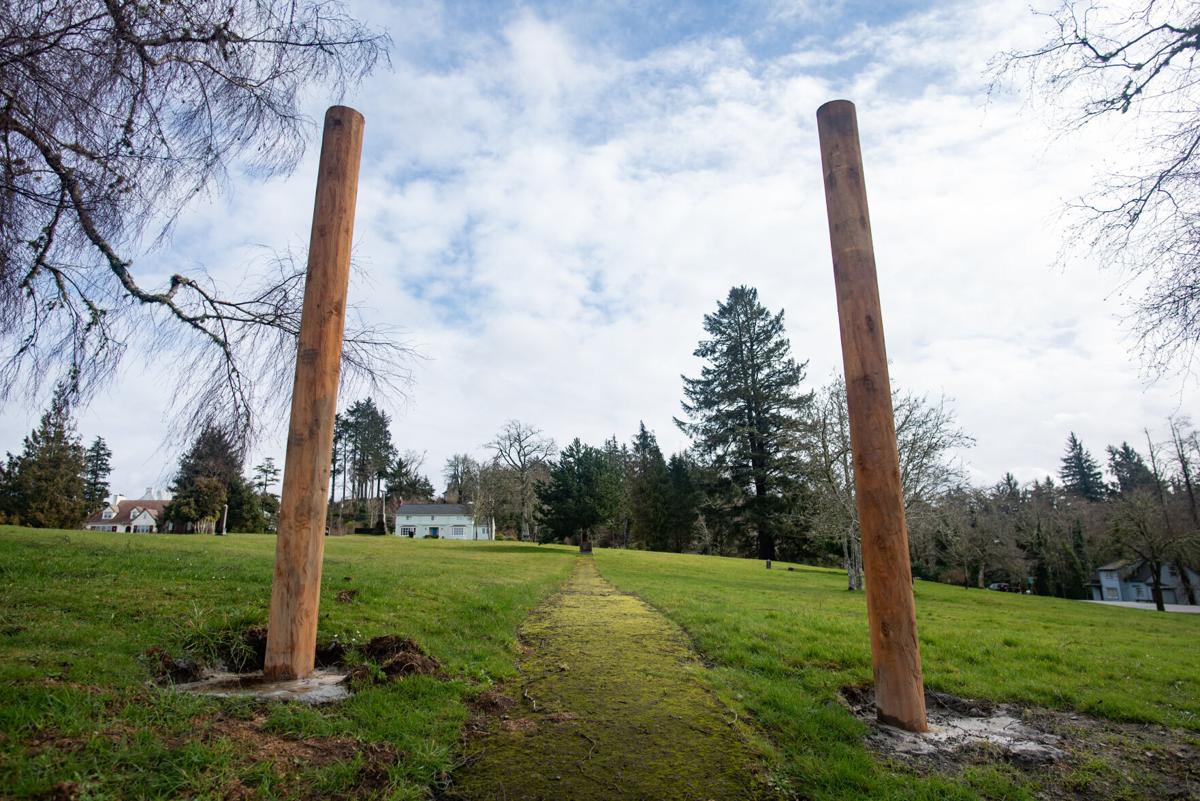 The Astoria Pioneer Cemetery does not have a sign above the main path entrance.

Nobody knows how many bodies are buried in the cemetery at the top of the hill in Astoria.

This spring, students and instructors with Clatsop Community College’s historic preservation and restoration program are documenting the Astoria Pioneer Cemetery off Niagara Avenue. They plan to clean and possibly repair the few remaining grave markers and carve a new entrance sign.

While this work won’t uncover answers to many questions people have about the property, it will help inform future decisions about how to enhance visitor enjoyment and understanding of the cemetery and its history.

It may also lead to a name change.

There is unease about how the term “pioneer” — a title applied to the cemetery in the late 1960s — glosses over a complicated and brutal history between native tribes and European settlers.

Given the additional uncertainty of who exactly is still buried at the cemetery, some have suggested the name is no longer accurate — and may have never been accurate. They say the carving of the new entrance sign could be an opportunity to return to the cemetery’s original name: Hillside.

“It’s really so unclear on who is up there and do these people even qualify as so-called pioneers?” said John Goodenberger, a local historian and preservationist.

Goodenberger has provided historical documents and information to city leaders to help them when they discuss the matter at a City Council meeting in April.

Goodenberger and Lucien Swerdloff, who leads the college’s historic restoration program, aren’t sure what to expect in terms of community response to a possible name change. But both men think of the debate that erupted in 2019 around dated language on a wooden sign behind Fort George Brewery that commemorates Fort Astoria.

With the cemetery, language is only a small part of the dilemma.

As many as 700 burials may have occurred at the Astoria Pioneer Cemetery between 1865 and 1897. But records are spotty and the dead have moved around — multiple times.

Some were dug up and moved when the cemetery first opened in 1865. They came from a cemetery farther down the hill that had become more valuable as land to develop rather than as a final resting place. Then, when the city’s Ocean View Cemetery opened in Warrenton in 1897, families were encouraged to relocate remains and headstones there. Some bodies went to Greenwood Cemetery off of state Highway 202.

Stories have grown around these frequent disturbances at the hilltop cemetery: a beautiful dead woman found perfectly preserved until her windowed casket is opened and she disintegrates; teenagers break into the Shively family’s ivy-covered crypt in the far corner of the cemetery, push aside a casket lid and a skeleton rises up only to — poof! — explode into a cloud of grave dust. Before a small grill on the crypt door was covered, it was actually possible to see bones in the crypt, former park employee Dick Magathan said.

Some members of Astoria’s early families once rested at the hilltop cemetery — the Van Dusens, Capt. George Flavel — but they were moved to Ocean View decades ago. One city founder is still up there, though, likely buried somewhere under Niagara Avenue.

Then there are the Chinese bodies that might be buried in the cemetery or, because of prejudices at the time, just outside its boundaries under what are now city streets. One persistent story involves a mass grave or the unmarked graves of hundreds of Chinese workers at the cemetery.

If the story is true, Goodenberger wrote city leaders, “bone for bone, there are more Chinese people in the cemetery than Euro-Americans.”

Though there are only a few grave markers left — many of them difficult to read or damaged — it is likely several hundred bodies are still buried in the cemetery.

It’s been 124 years since you could die in Astoria and be buried there. The city prohibited burials in city limits beginning in 1897. After it closed, the hilltop cemetery was first neglected, then forgotten.

Magathan, who built a split rail fence around the cemetery in the 1980s, remembers a story of how neighborhood children accidentally kicked a ball into what they thought was a long abandoned lot only to discover gravestones.

Efforts to clear out blackberry bushes and revitalize the cemetery as a park began in the 1950s and ‘60s. In the late ‘60s, the cemetery was renamed Astoria Pioneer Cemetery, complete with a carved wooden entrance sign and a granite monument.

A plea even went out from the chairman of the county historical advisory committee, asking people to return grave markers that had disappeared over the years.

“There are rumors that some have found new use as paving stones in walks and patios about the city,” according to a 1968 article in the The Daily Astorian. “Dr. (Edward) Harvey said no questions will be asked if the missing stones simply come back.”

A positive aspect of the hilltop cemetery’s name is that “pioneer” makes it clear the door is shut to future burials.

He wonders if changing the name back to Hillside would reignite any inquiries.

But Eric Anderson, the owner of the Hughes-Ransom Mortuary & Crematory in Astoria, said he has never had to field inquiries about an Astoria burial. Most people go to Ocean View, he said, or Greenwood Cemetery.

Anyway, the number of traditional casket burials is low with cremation rates hovering at around 80% to 85%.

The city records around 70 to 80 burials at Ocean View each year — a mix of casket burials and cremations, but most are cremations, according to city staff.

It is a personal decision, said Anderson, though cost is often a major driver. A cemetery plot for a casket can be expensive and then there are hefty fees to open and close a grave, plus funeral home costs.

To Anderson, however, the dip in traditional casket burials also reflects the evolution of Astoria. More and more, people are moving here from outside the area, he said. They don’t have family plots at Ocean View. They don’t have ties to the old names.

Despite all the upheavals among the graves and the uncertainty that persists about who is buried there, the hilltop cemetery is an important historical site, Swerdloff and Goodenberger said.

There were once several cemeteries around Astoria, but the hilltop cemetery is the only one that hasn’t been paved over or built over. It is still recognizable as a place of burial. The scattered few headstones that remain can only tell visitors a fractured story of the past, but there are still hints to be gleaned.

“I would nominate it as representative of the literal movement of Astoria,” Goodenberger said, adding, “As the houses came up the hill, the dead had to keep moving.”