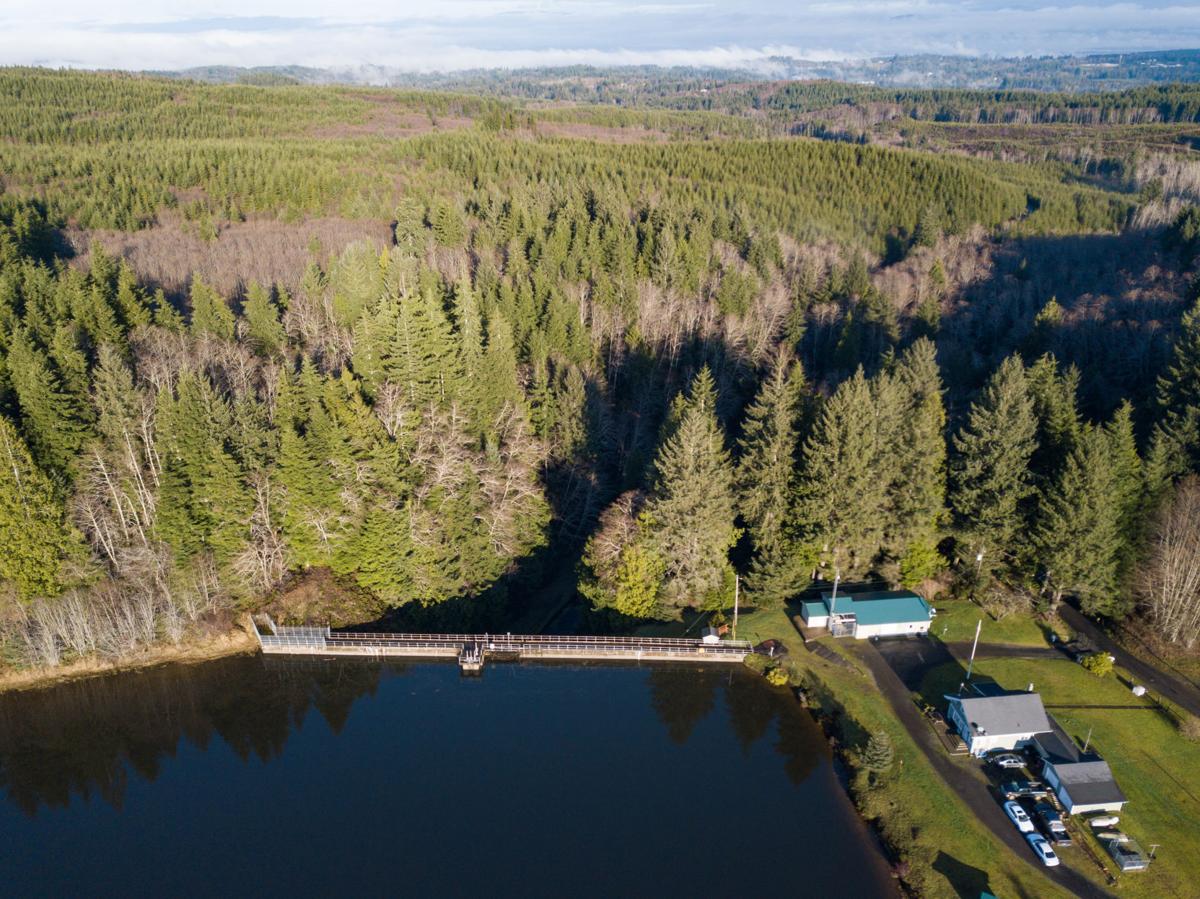 The Bear Creek watershed east of Astoria supplies water to the city. 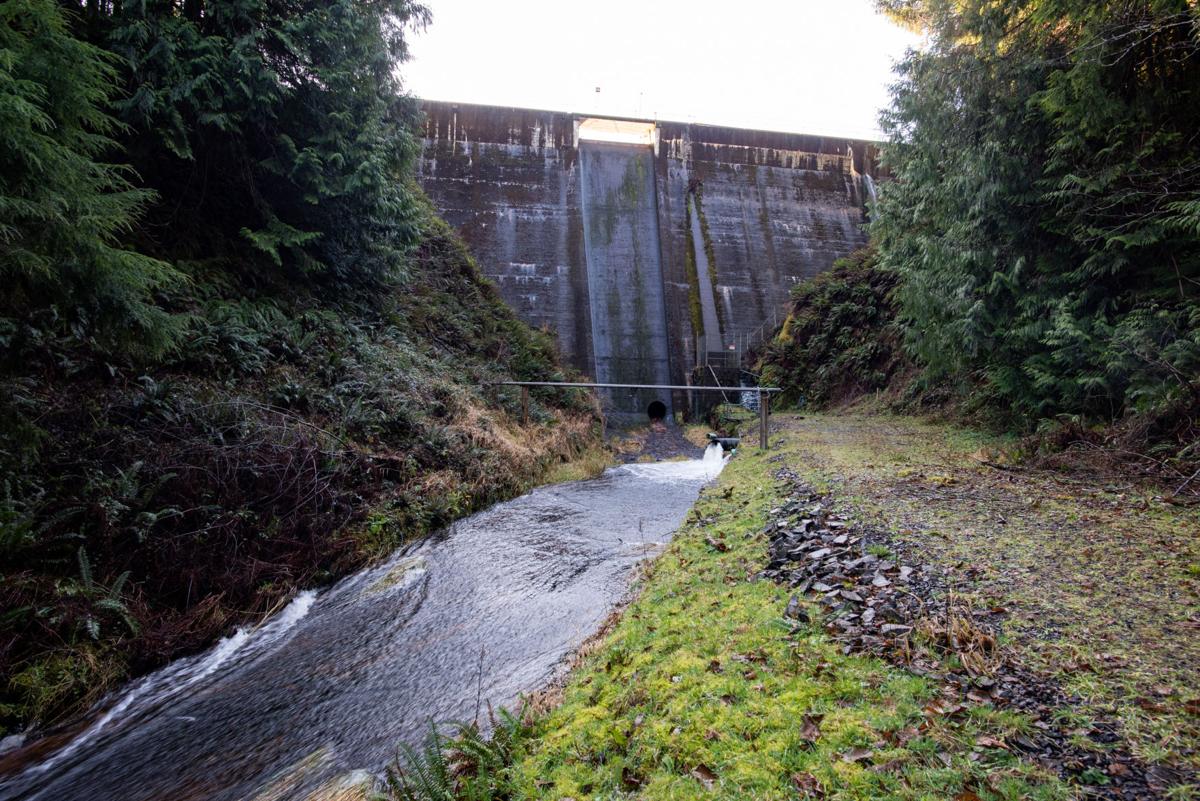 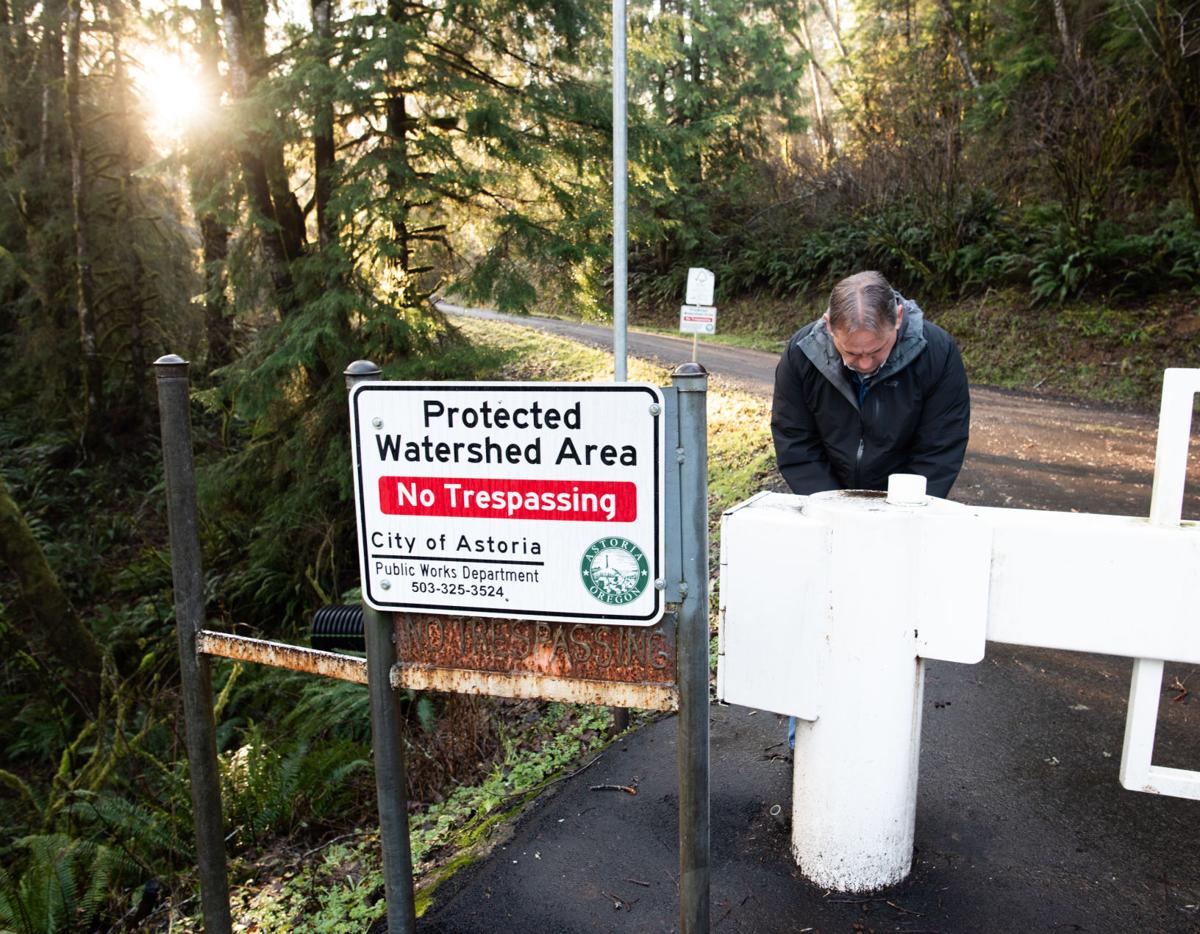 Jeff Harrington, the Astoria public works director, opens the gate to the road leading to a reservoir above Bear Creek Dam. 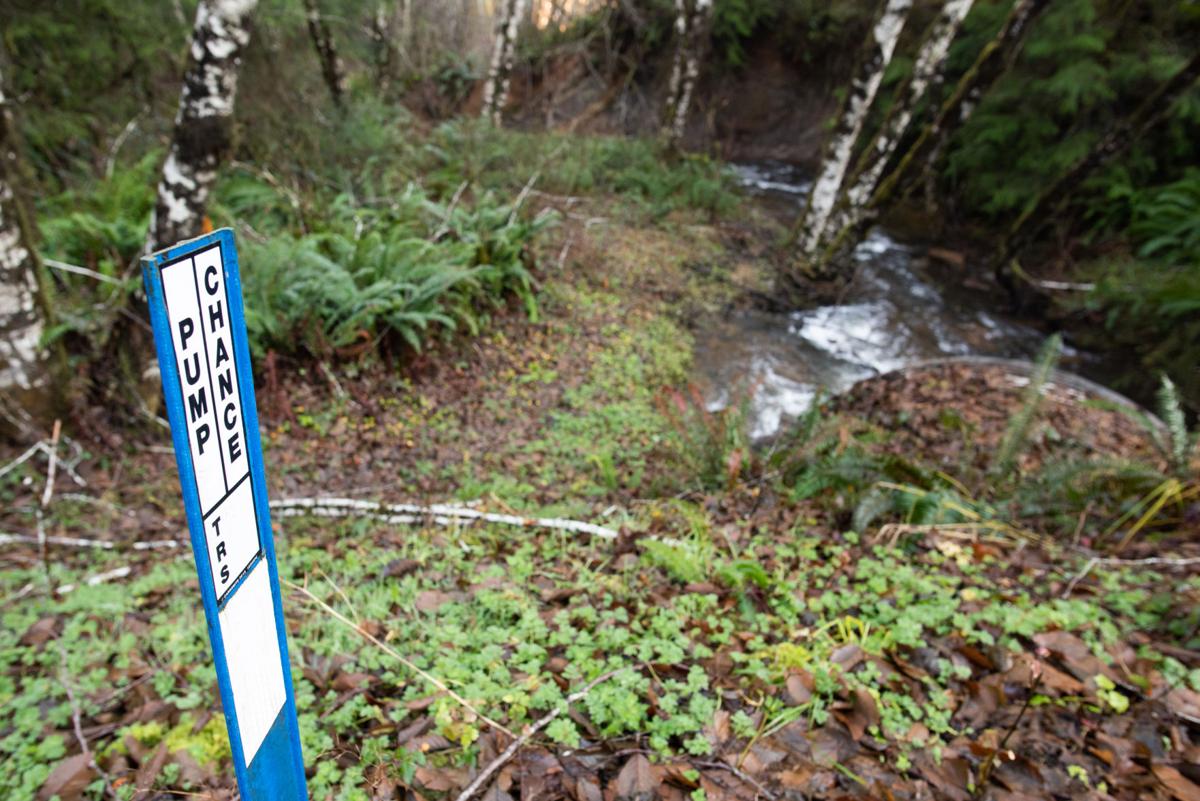 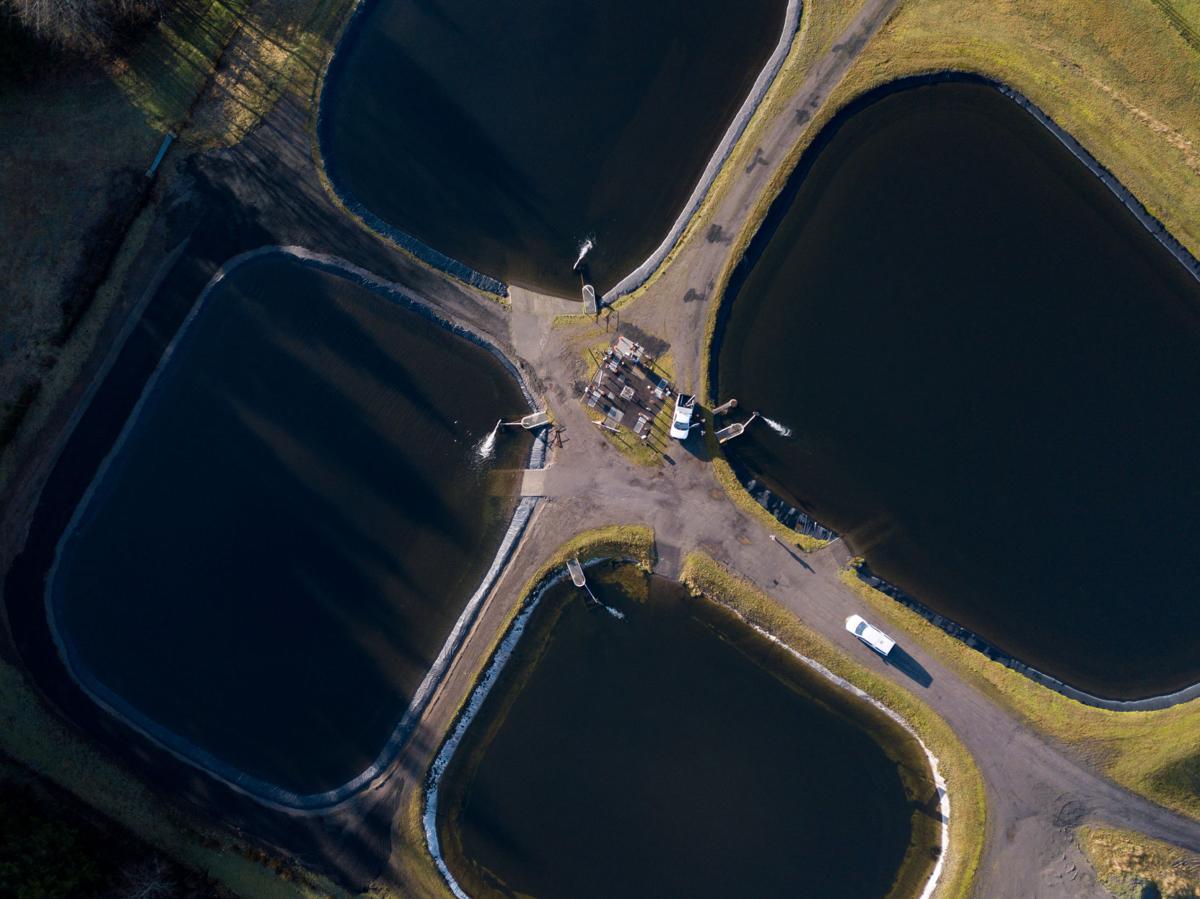 Astoria built a slow-sand filtration system next to its main water reservoir in the 1990s. A water system master plan in 2000 resulted in a fourth cell of the treatment system. 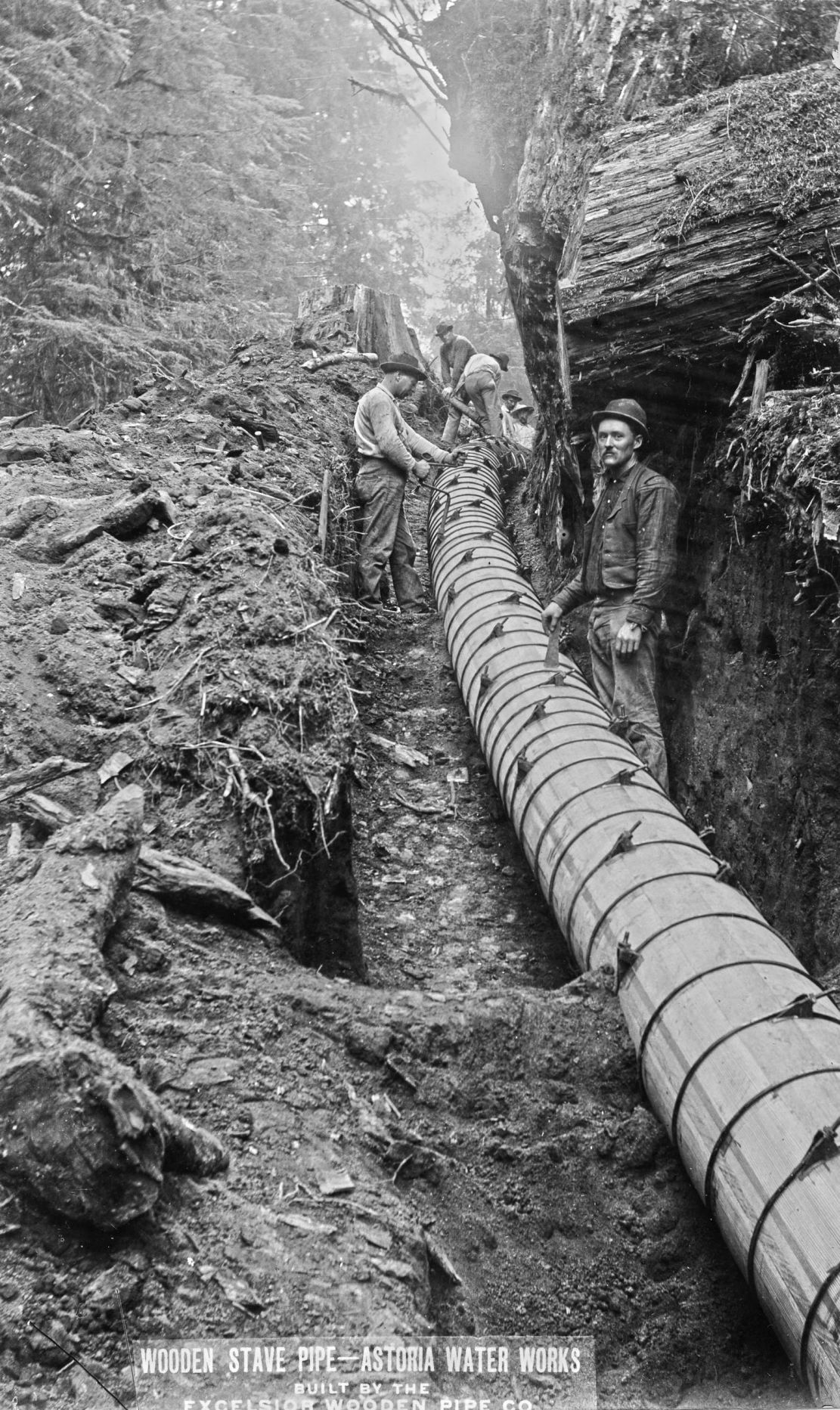 In 1895, work crews trenched a wooden pipe 12 miles from the Bear Creek Dam to a reservoir just east of Astoria. The wood pipe was replaced with concrete cylinder in 1963.

The Bear Creek watershed east of Astoria supplies water to the city.

In 1895, work crews trenched a wooden pipe 12 miles from the Bear Creek Dam to a reservoir just east of Astoria. The wood pipe was replaced with concrete cylinder in 1963.

Astoria bought its own watershed in 1893, securing 3,700 acres of hills and streams around Nicolai and Wickiup mountains feeding an abundant water supply into three reservoirs and the Bear Creek Dam 12 miles east of town.

In 1895, workers trenched a transmission line winding through the wooded hills, carrying water from the dam to the city’s finished-water reservoirs.

Making sure that pipe isn’t damaged in one of the region’s many landslide zones, much less a large earthquake, is one of the most serious issues Astoria hopes to address in a 20-year update of its water system master plan.

The city recently advertised for firms that could complete the state-mandated update, expected to be conducted over the next couple of years. Firms will look at several issues identified in the 2000 water master plan. Questions around supply and demand will be fairly straightforward, said Jeff Harrington, the city’s public works director.

“We have plenty of water,” he said.

The city’s 2000 water plan projected a demand of 15,000 people, Harrington said. But Astoria hasn’t topped 10,000 people since the 1990 census. Water demands in the city are largely driven by seafood processing. The city has never run out of water and once served twice the 2.5 million gallons it currently averages, he said.

But commingled with the water study are several mandates from the state and federal governments around natural disaster resiliency and security. One is an analysis of earthquake risks to the city’s water supply.

“That’s a big problem for us, with our landslide terrain here,” Harrington recently told the City Council. “We actually have sections of water line that fail due to landslides without having an earthquake happen.”

During heavy rains four years ago, a section of pipe crossing Little Bear Creek and buried along a steep bank just below a nearby clearcut became exposed by erosion. The city was granted federal emergency funds to armor the bank with rocks.

But a resiliency study found 45 such areas where the 12-mile transmission line is at risk, Harrington said. A seismic risk analysis will look at those and other points of concern, and what the city should do to mitigate the risk, he said.

In addition to the seismic analysis, federal mandates require the city to prepare for all manner of risks to the water supply, be they natural disasters or cybercrime, Harrington said. The city must also create a plan to respond in case of an emergency.

Astoria dodged a seismic bullet when an analysis of the 107-year-old Bear Creek Dam indicated it did not need upgrades to reach current seismic codes.

“That was projected to be a little over $2 million at the time,” Harrington said. “So we were very fortunate … that we didn’t need to do that project.”

The last water master plan resulted in a fourth cell being added to the slow-sand filtration pond built in the 1990s at the main reservoir above the dam, covered reservoirs for treated water nearer to town, new water storage tanks and a small grant-funded hydroelectric plant that powers the dam.

Projects not completed from the last plan include a clear well system, the final stage in purification; an upgraded chlorine purification system previously voted down by the City Council; and upgrades to water lines for issues such as getting more water to seafood processors at the Port of Astoria, Harrington told the City Council.

“The new plan will capture those projects, update those costs and of course add new projects that will be identified,” he said.

The dam is stable and has never overtopped. But the city still needs to design an emergency spillway around the dam in preparation for 1,000-year storm, Harrington said.

“We don’t want it going over the top of the dam, because that could cause erosion on both sides of the dam,” Harrington said of heavy rains.

The city is planning to dig an emergency spillway, about 120 feet wide and at least 2 feet lower than the top of the dam, from Main Lake to Cedar Creek, a smaller feeder creek just east of the dam that connects downstream with Bear Creek.

“It was talked about 20 years ago, so (the state) is finally saying, ‘Hey, let’s get moving on this.’ So we’re just working on the concept right now. It will probably be built in the next couple of years.”

I am no expert, but I would refer readers to a 2018 report of the Centers for Disease Control and Prevention entitled "Statement on the Evidence Supporting the Safety and Effectiveness of Community Water Fluoridation." [https://www.cdc.gov/fluoridation/guidelines/cdc-statement-on-community-water-fluoridation.html] All muncipal water districts in the United States are required to monitor fluoride levels to maintain them at a level sufficient to prevent dental caries but no higher. Fluoride is a naturally occurring element which is present at some level across the globe and can be toxic above certain levels. It is my belief that the Astoria public water system maintains a safe level of fluoridation, which they document periodically in reports to the public.

This is all meaningless since neurotoxic fluoride is still added to the public water. Those who only trust Snopes are missing out on all the research that's been reported since 2014, including:

This year’s first major study was from a research group based in Canada and published in the prestigious journal JAMA Pediatrics [Green 2109]. It received widespread media coverage, with articles in The Washington Post, CNN, NPR, Time Magazine, etc. The editors of JAMA Pediatrics even went so far as to say that the study reversed their previous (mis)conception that fluoridation was perfectly safe and only crazy people claimed it could be neurotoxic. The editor-in-chief said if his wife were pregnant he would advise her to avoid fluoridated water [JAMA Pediatrics Christakis podcast]. Several experts equated the harm found from fluoride to that from childhood lead poisoning.

2) Riddell 2019: found almost 3 times higher risk of ADHD for those living in fluoridated areas in national sample of Canadian children.

This study, also from Canada, found a strong association between home water fluoride concentration and much higher risk of ADHD diagnoses in children [Riddell 2019]. The data came from a government sponsored nationwide survey of health and nutrition (Canadian Health Measures Survey). The study found that children living in areas with fluoridated water had a 284% higher risk of having a diagnosis of ADHD as those who lived in non-fluoridated areas. This study confirmed two previous studies linking fluoride to ADHD from Mexico and the USA [Bashash 2018, Malin 2015].

3) Till 2020: (published ahead of print in Nov 2019) Children who were formula-fed and lived in fluoridated areas as babies have dramatically lower IQ compared to those who lived in non-fluoridated areas.

Formula-fed babies (with most of the powdered formula reconsitututed with tap water) in fluoridated areas averaged 4 IQ points lower compared to formula-fed babies in non-fluoridated areas. Tests of non-verbal IQ showed even more dramatic effects, with an average loss of 9 points in the non-verbal component of IQ tests. When translated to typical water fluoridation levels in the USA of 0.7 mg/L the Till 2020 findings suggest a loss of non-verbal IQ of 13 points for infants in fluoridated areas compared to those with low levels of fluoride in the water. This study was in a carefully monitored cohort followed from before birth through age 4 years. The study authors controlled for many factors. When they also adjusted for mothers’ fluoride exposure during the pregnancy, that only accounted for a small part of the IQ loss. Thus, infancy may be at least as susceptible a period for neurotoxic harm as the prenatal period and exposure during both developmental periods may produce additive harm. Not just pregnant women should be advised to avoid fluoridated water, their children should as well.

These three studies were all within Canada, where the average water fluoridation level is 0.6 mg/L, while the current average in the USA is 0.7 mg/L (and in some communities still up to 1.2 mg/L). These studies are also relevant to the USA because socio-economic and other factors in Canada are arguably as similar to the USA as can be found anywhere.

A fourth study, published just last week, bursts any remaining quibbles about relevance to the USA because it studied children in the USA [Malin 2019].

4) Malin 2019: Altered sleep patterns in adolescents linked to levels of fluoride in the drinking water in the USA.

This study used data from the rigorous, nationally representative, NHANES health and nutrition surveys conducted by the CDC. The authors found that in adolescents age 16-19 years with fluoridated water, there was a doubling of symptoms indicative of sleep apnea, compared to those with low fluoride water. There were also significantly later bed times and waking times in the adolescents with higher water fluoride levels. The link between fluoride and sleep disturbances may be through fluoride’s effect on the pineal gland. This gland, situated in the brain, regulates sleep-wake cycles through the hormone melatonin. The pineal gland accumulates high levels of fluoride, and previous studies in animals suggested fluoride may alter melatonin levels [Luke 1997]. Alteration of sleep patterns may be a neurotoxic effect of fluoride separate from the loss of IQ and increased risk of ADHD due to earlier life exposures.

It bears repeating that all four of these 2019 studies were performed in Canada or the USA where the majority of fluoride exposure comes from artificially fluoridated water. In other words, harm was found in children with average intakes of fluoride.