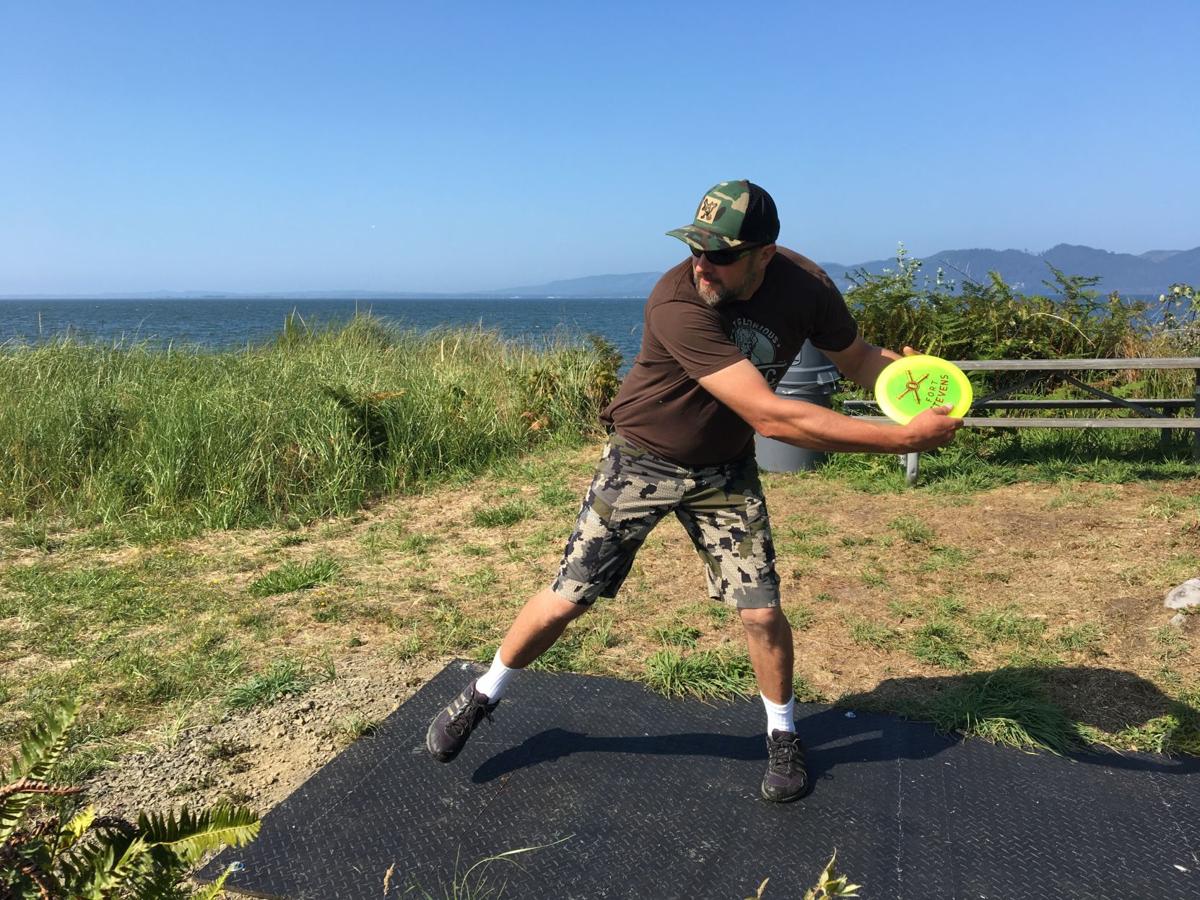 Park ranger Dane Osis prepares to launch off the tee pad at the disc golf course at Fort Stevens. 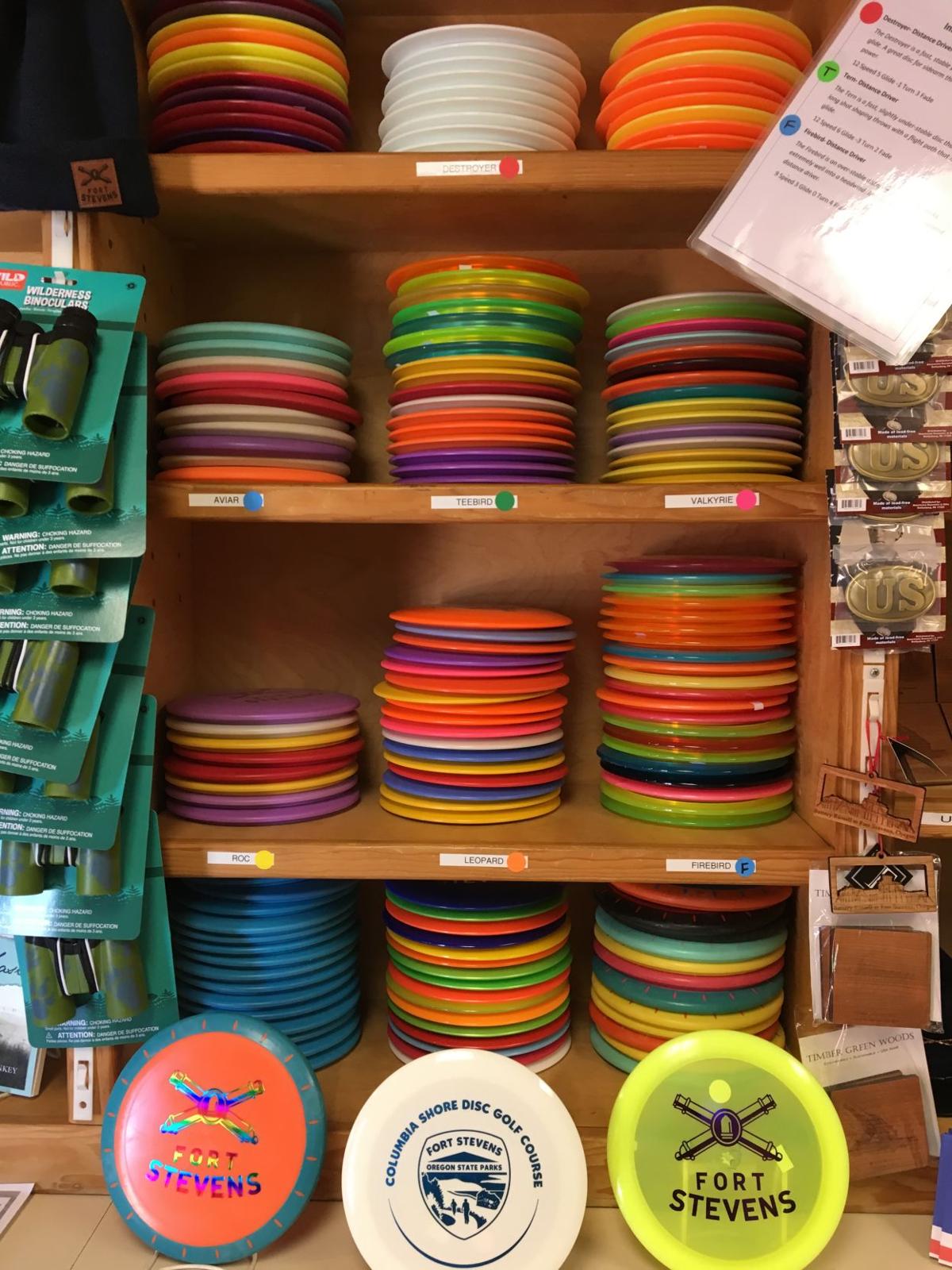 The park's gift shop now sells all the discs you would ever need to play through the course. 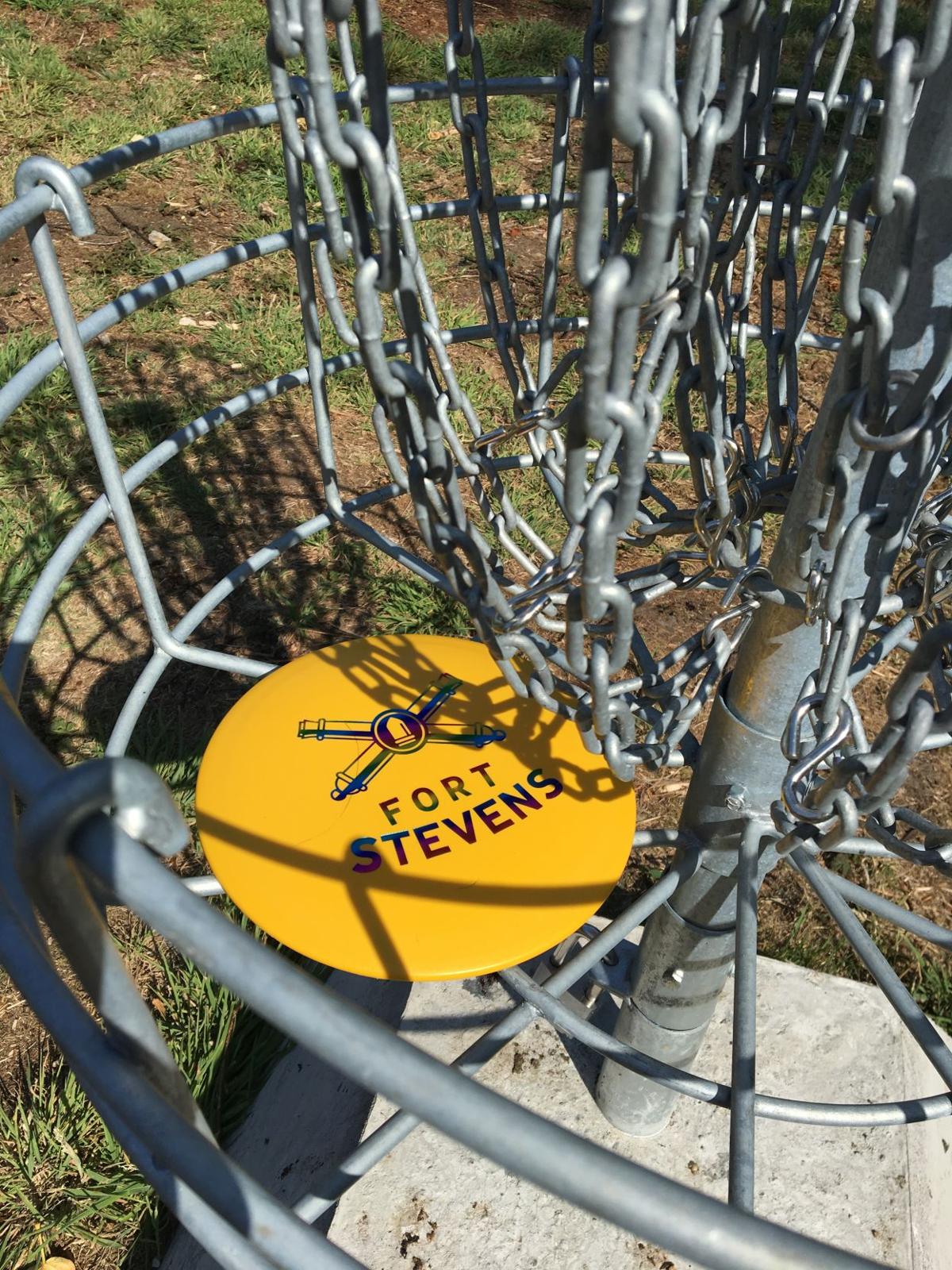 The state park branded its own discs.

Visitors to Fort Stevens may have noticed the state park got a bit more colorful this summer.

Small, vibrant discs can be found flying through the air on the park’s new disc golf course and stacked high in the park’s gift shop.

On windy days, the discs can also be spotted in trees, blackberry bushes and sinking to the bottom of the Columbia River.

“The wind is like the great equalizer,” said Dane Osis, a park ranger who helped guide the installation of the course, and has lost a disc of his own to the river.

The addition has attracted a new group of people to Fort Stevens — both locals and tourists.

“We’ve seen an uptick in usage here,” Osis said. “We get lots of people playing the course, and we get people visiting the park and checking out new areas that they normally wouldn’t.”

To help promote the new course, Fort Stevens will waive its day fee over Labor Day weekend and invite visitors to try out disc golf for a chance to win prizes.

Since the course’s installation, the park has extended hours and now remains open until dusk for players.

“I just get surprised by the amount of people,” said Ray Smith, one of the park’s volunteer groundskeepers.

“People just go around and around” the course, he said. “They’re proud of what they’re doing.”

The nine-hole course covers about 30 acres in the northeastern section of the park. The course leads players along the river and winds around natural barriers and historical markers, such as the mine cable hut near the sixth hole.

Two years ago, that hut and the rest of the area were basically inaccessible, overgrown by Scotch broom and other brush.

“You couldn’t even see the river,” Osis said of the space before the project began. “We removed the invasive species and reclaimed it. It’s riverfront property, and we now have people playing disc golf, walking their dogs and just hanging out in those areas.”

“Disc golf is kind of what drew people out here, but the overall park improvement benefits everyone that uses the park.”

Chad McHugh, a seasonal ranger, designed the course. McHugh, who has played disc golf casually for over a decade, spent the spring working with Osis to create a course that capitalizes on the historic space without disturbing the archaeologically sensitive area.

The result is a combination of rubber tee pads and cement blocks that keep the baskets sturdy without breaking into the protected soil.

“We’ve gotten a lot of positive feedback,” McHugh said as he and Osis played through the course, each carrying more than a dozen discs in their bags.

The rangers meet regularly, about once a week, to play after their shifts and on their days off.

Each hole has a designated tee pad decorated with a small broom, thanks to a miscommunication that resulted in an array of miniature brooms far too small for custodial duties, but perfect for keeping tee pads debris-free.

All holes have at least one tee pad, but most have two — a long tee and a short tee.

The versatile course is part of the reason people keep coming back.

“It’s such a great design,” said George Pinney, who has been playing at the course at least three times a week since before its grand opening in June. The tee variety makes it “approachable for youngsters,” and he brings his 11-year-old daughter out to practice with him.

Disc golf is a relatively affordable and easy sport to approach skill-wise, which is why people of all ages and all levels enjoy the park, Osis said.

The most frequent complaint they receive about the course, according to Osis, is, “That there is only nine holes.”