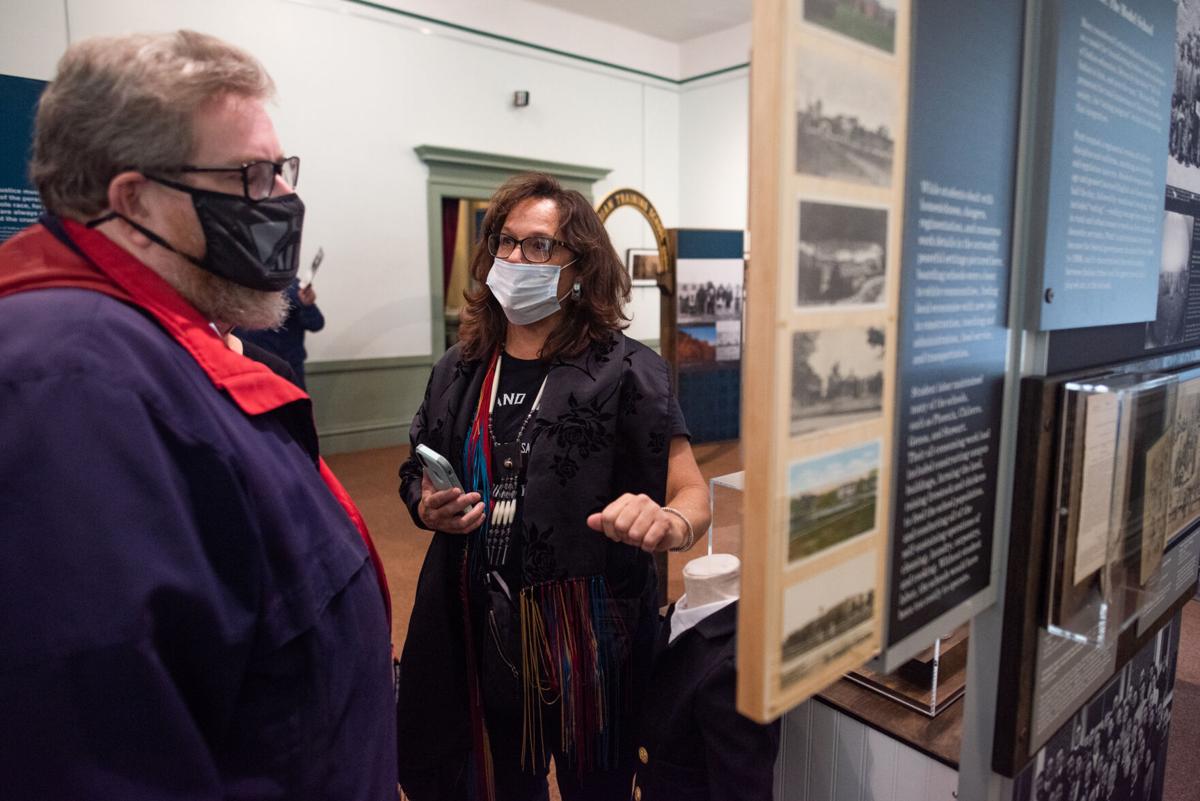 Sallie Thurman discusses the 'Away From Home' exhibit, which features several of her ancestors, with McAndrew Burns, the executive director of the Clatsop County Historical Society. 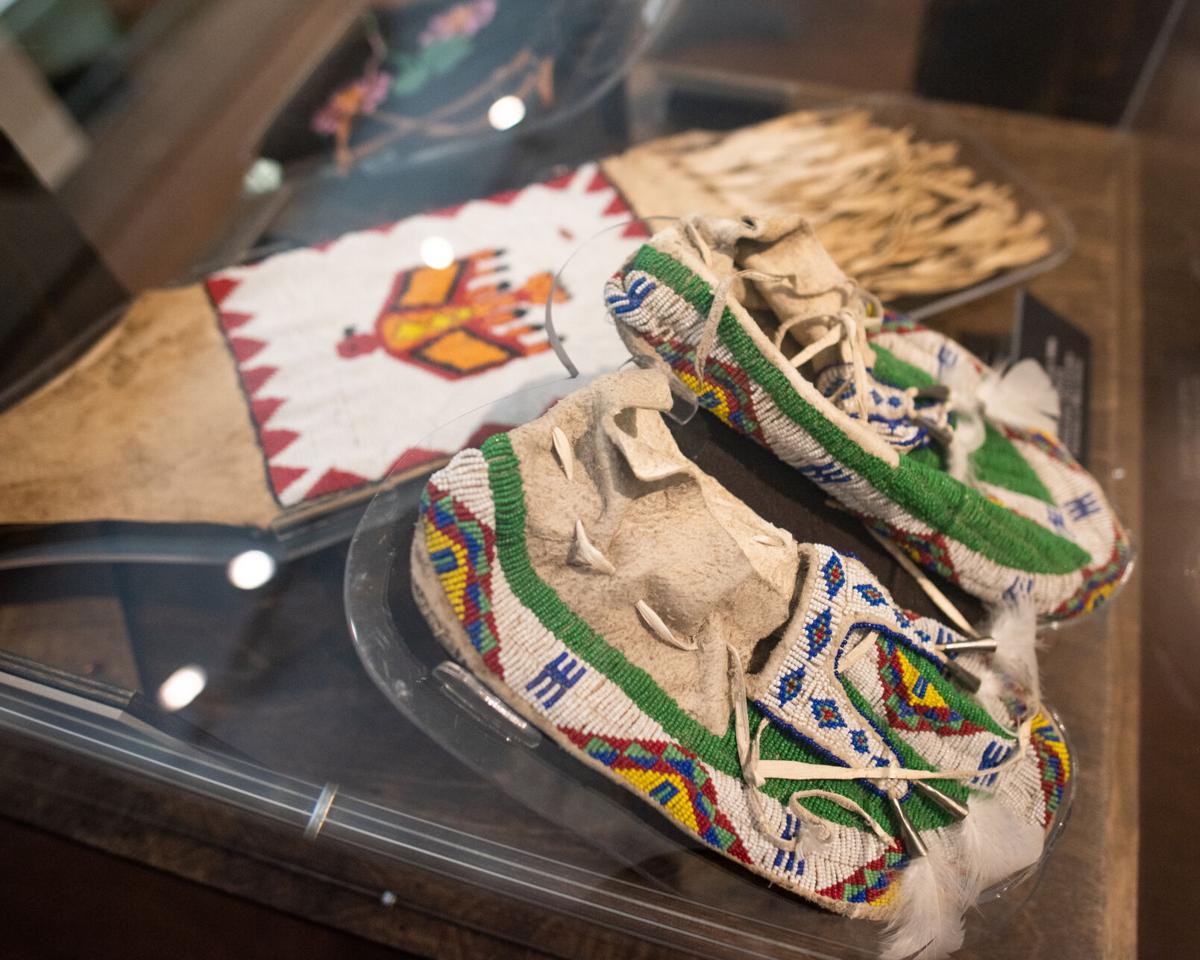 Beaded moccasins, a tobacco bag and a woman's purse were contributed to the exhibit by Sallie Thurman's family. 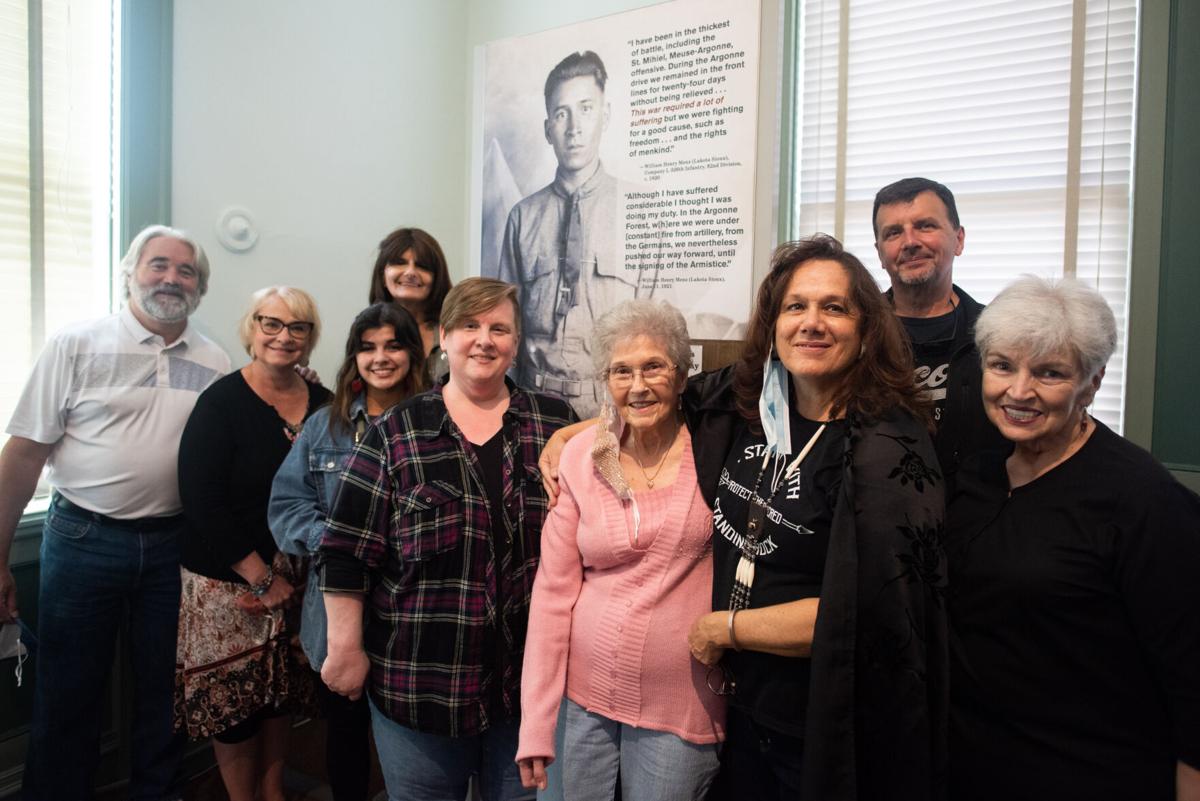 Family members gather around a photo of their ancestor, William Henry Menz, of the Lakota Sioux, who served in World War I and attended an Indian boarding school as a child. 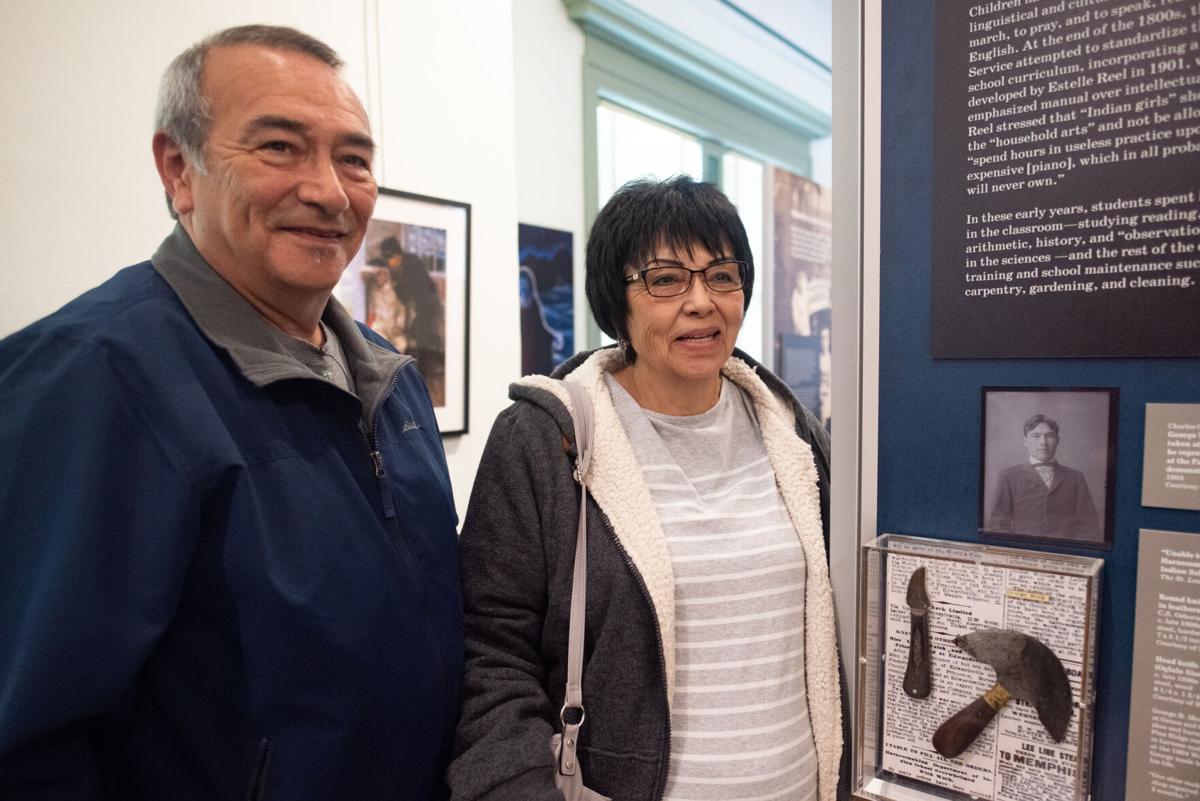 Ralph Burgoyne and Mary Burgoyne Simpson are decedents of George Menz, who attended Genoa and Chilocco Indian schools and was a skilled leathermaker.

Sallie Thurman felt like she better understood her mother after she learned about the American Indian boarding schools.

To Thurman, it explained the distance, the anger. Thurman’s mother, a woman of Lakota and Dakota descent, had told her children about attending boarding schools, but not the context and purpose of the schools — off-reservation institutions created by the federal government in the late 1870s to force cultural assimilation on native children.

Thurman only learned about the schools later while researching her family.

The boarding schools are the subject of a traveling exhibit, “Away From Home,” on display at the Clatsop County Heritage Museum. Though the few schools still in operation are run much differently now, the early versions were part of a concentrated effort to eradicate native cultures through education after “government officials found it was less expensive to educate Native Americans than to fight wars (against them),” according to materials provided at the exhibit. The founder of one of the schools stated a philosophy to “kill the Indian and save the man.”

Thurman, who lives in California, and other members of her family traveled to Astoria to see the exhibit in April. Family members had contributed stories and items to the exhibit: beaded moccasins, a tobacco bag, a woman’s purse, photos — including a photo of a trio of siblings, one of whom died after being taken to a school and who was buried in an unmarked grave.

The schools and the policy that led to their creation was “a war waged on children,” according to exhibit materials, with repercussions still felt by families today.

The original “Away From Home” exhibit debuted in Arizona in 2000. It’s had years of audience interaction and undergone several updates, but it is still new information to many, even to Native Americans.

A change in direction

For the Clatsop County Historical Society and the museum, the exhibit is part of a change in direction that has been underway for a while, as the institution reexamines whose stories it tells and how.

“Museums have an obligation to accurately tell stories and help explain complicated ones,” said McAndrew Burns, the executive director of the historical society.

And certainly the story of the Indian boarding schools is complicated. Burns was warned by the curator of the Heard Museum that they found people brought very different memories and personal experiences to the exhibit.

The boarding schools of the late 1800s and early 1900s were created to separate children from their families and then they worked to separate the children from their native identities, cutting their hair, taking away traditional garb, often forbidding them to speak their own languages. Conditions at the early boarding schools — there were 25 federally-operated schools by 1902 — were often unhealthy and abusive.

A report in 1928 criticized the schools, finding that they relied on student labor to operate, were overcrowded and did not provide sufficient food or medical services, among other issues.

Reforms began in the 1920s and continued through the 1930s. Native activism and involvement in education in the 1960s and 1970s brought about further changes. Many of the federal schools closed in the 1980s. The four off-reservation schools that remain today are tribally controlled and reflect native values.

For every story of abuse and want, there are many former students who can point to vocational skills and opportunities gained or cultural awareness, knowledge and community found in the schools. Some students met future spouses and credit the schools with providing opportunities and direction that were not available elsewhere at the time.

Still, says Tipiziwin Tolman, a member of the Standing Rock Sioux and one of Thurman’s relatives, the schools were born out of a terrible truth: the purposeful silencing of identities and a way of life and the separation of families.

She sees how this past destruction continues today. In her maternal line, there are 100 years of Catholic boarding school. Her own family has had to find ways to heal and rebuild connections to each other and their culture.

There is a reason her first language is English and not Lakota, the language of her people, a language she has worked to learn and to pass on to others as an adult.

“When we talk about it in a historical context,” she said, “it makes it sound like it’s generations ago, or ancient history, and it’s not.”

Burns eagerly booked the exhibit two years ago when he saw it would be available. He knew it would be a “powerful, relevant story.”

But events of the past year have only highlighted social and racial inequities and unresolved wrongs across American history, and the exhibit has proved to be even more relevant than he thought it would be.

“I would hope that it makes people consider, or reconsider, some of our nation’s history and the interactions we have had within our society,” he said.

It is easy, he added, to think of history as static information, done with — to think that it doesn’t affect things today.

“But it does,” he said. “The impact of these schools still affects Native American communities generations later. Events and attitudes that one group has for another makes ‘ripples through time’ that we are still dealing with.”

‘It is essential that this past be acknowledged’

“It is essential that this past be acknowledged and understood not just as a national story, but also as a local one,” she said.

Certainly, the battle against erasure is ongoing for North Coast tribal people.

The Clatsop-Nehalem Confederated Tribes regained historical tribal lands — the first they have had since they began to be displaced 200 years ago — only last year through a transfer from the North Coast Land Conservancy. It is an important foothold for the tribe, but still only a foothold.

The Chinook Nation has fought unsuccessfully for decades for federal recognition. While they are recognized as a tribe by Washington state, this does not bring any rights to land or resources.

Now, though, there is a sign along U.S. Highway 101 ahead of Fort Columbia Historical State Park where tribal members hold a ceremony to welcome the first salmon each year.

“Away From Home” is a temporary exhibit. It closes on May 25. But when it closes, a statement the museum drafted in preparation for the exhibit will move downstairs to a permanent exhibit about North Coast tribes.

The statement recognizes the Chinook and Clatsop people and the fact that indigenous peoples’ “connection to this land has been challenged by violence, disease, treaties, encroaching settlers, relocations and other actions; however, throughout this turbulent history, this land has continued to hold great historical, spiritual and personal significance for the original land stewards of this region.”

“We recognize and seek to advocate for the recognition of these, and other, native nations,” the statement continues, “and we honor indigenous people, past, present and emerging, and pledge to be more accountable to their needs.”