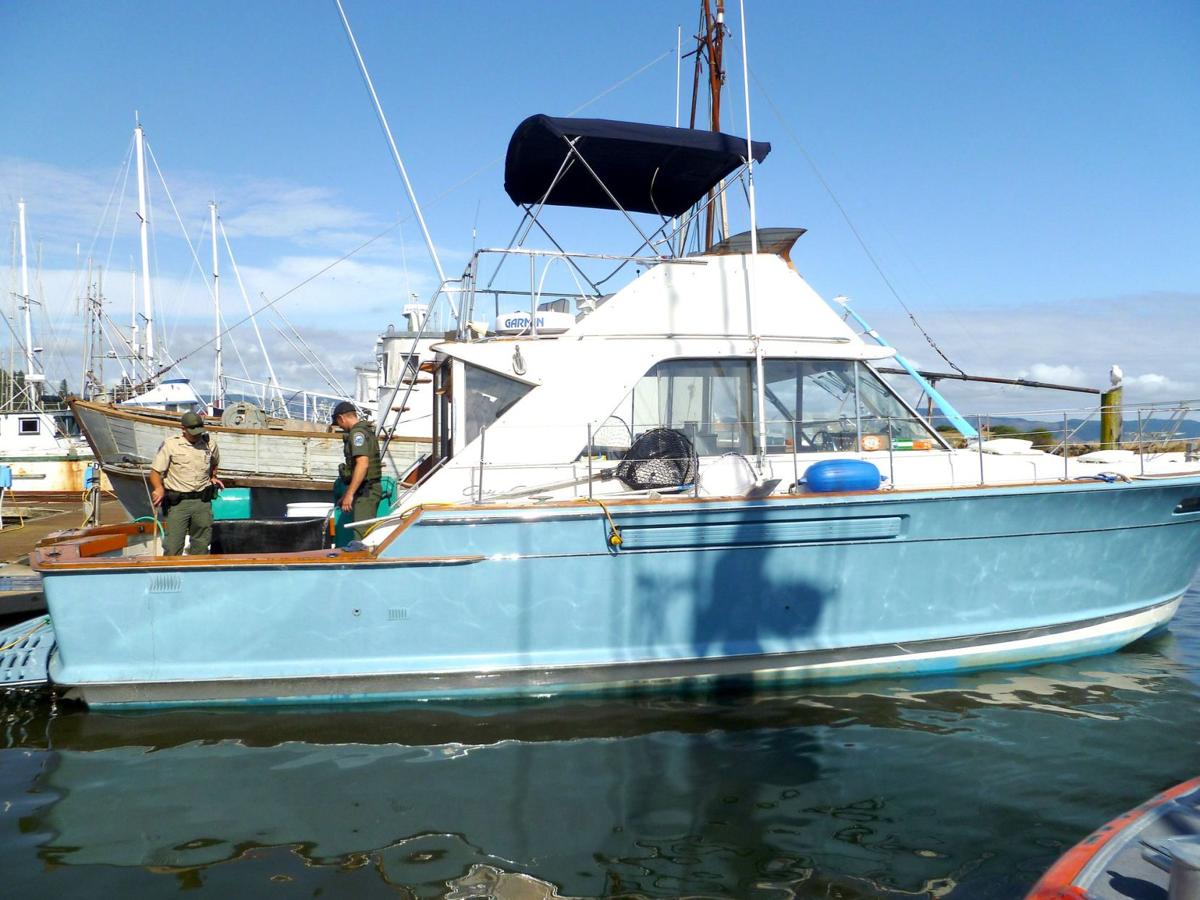 Word of Honor, a boat seized at the Port of Ilwaco, is examined by officers with the Washington Department of Fish and Wildlife. 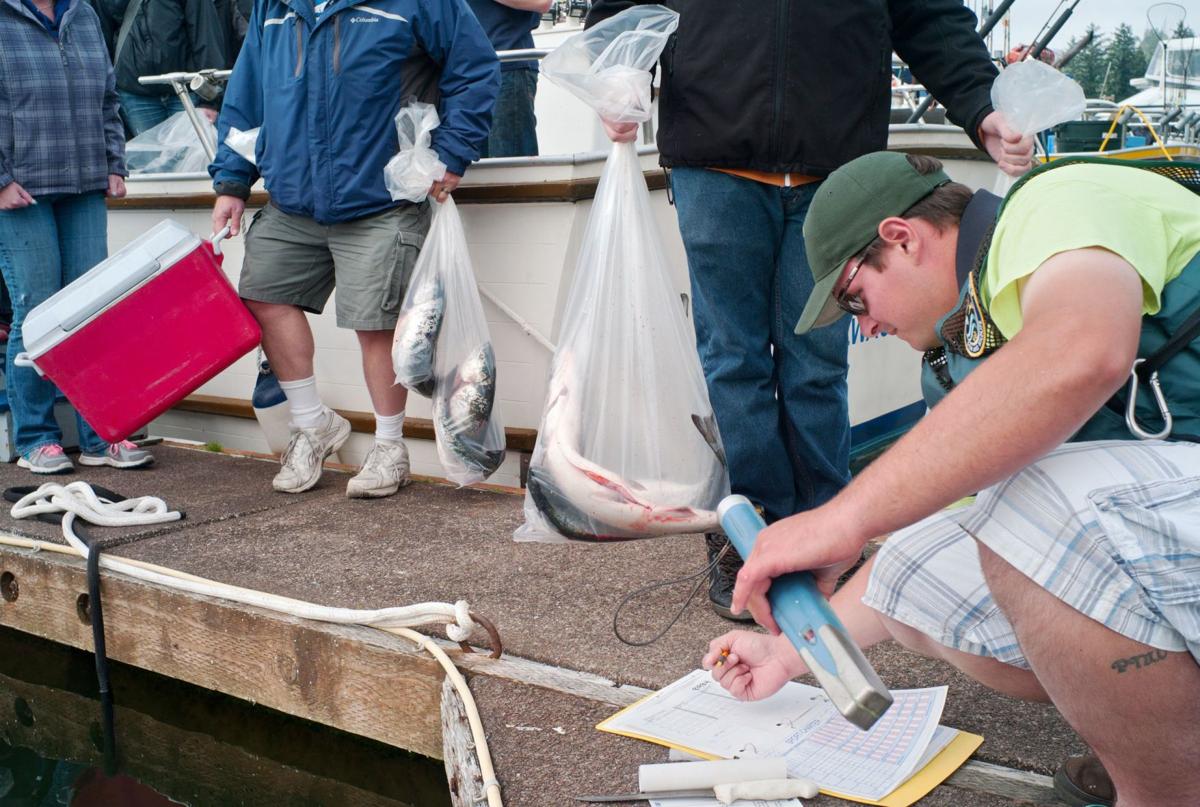 Fishermen from a legal charter have their salmon checked by a WDFW sampler upon returning to the Port of Ilwaco recently.

Word of Honor, a boat seized at the Port of Ilwaco, is examined by officers with the Washington Department of Fish and Wildlife.

Fishermen from a legal charter have their salmon checked by a WDFW sampler upon returning to the Port of Ilwaco recently.

ILWACO, Wash. — Enforcement officers with the Washington Department of Fish and Wildlife seized an Oregon charter boat Friday after the skipper was caught allegedly running an illegal charter operation out of the Port of Ilwaco.

The skipper of the vessel Word of Honor could face a gross misdemeanor charge which carries with it the potential for a maximum fine of $5,000 and up to one year in jail. The skipper has yet to be charged in Pacific County South District Court and WDFW officers would not reveal his name. In Washington, charter boats operate under limited entry licenses. While Oregon charter boats can fish in Washington waters, they are not allowed to pick up or drop off paying passengers in Washington, and vice versa.

The promise of a record-setting salmon run – a predicted 1.5 million chinook and more than 600,000 coho – is bringing hundreds of eager sport fishermen to the area. Slips at the Port of Chinook and the Port of Ilwaco have been booked solid since the recreational Buoy 10 fishery opened at the beginning of August, and business is booming for local charter companies. In the morning, lines of boats stretch up and down the Columbia River. Pickup trucks pulling boats on trailers clog U.S. Highway 101 through Chinook, queuing up for the boat launch and stopping traffic for blocks.

But others are also taking advantage of the bounty.

“We can only guess at the magnitude of the problem,” said Mike Cenci, deputy chief of statewide operations with the enforcement arm of WDFW, about illegal charter boat operations.

“These boats can run the gamut from having everything in place – licenses, safety gear, experience – to having nothing. Some of the skippers working illegally out of Washington ports are just cheating, doing business where they aren’t allowed but are otherwise capable, competent. Others, however, due to inexperience or lack of equipment, could be putting their clients in real danger.”

The skipper of the Word of Honor was “one of the nicest illegal charters I’ve ever met,” and runs a legitimate charter business in Oregon, Cenci said, though he can tell horror stories about other guys he’s encountered. For example, the one skipper who was working his way through a bottle of Wild Turkey whiskey while taking customers out on the river to fish. The undercover detective posing as just another angler ended up having to operate the boat for him.

In last week’s case, a detective booked a trip with the Word of Honor’s skipper and waited to see if the skipper would do the “right thing or the wrong thing,” Cenci said. “But he did the wrong thing.” He took the detective’s reservation.

When Fish and Wildlife officers arrived at the Ilwaco marina Friday and walked down the dock to confront the skipper, he was bringing back two passengers, a man and his grandson. The passengers cooperated with the officers, letting them look at the salmon they had landed and answering their questions. The officers let them keep their fish.

“They certainly told us the truth,” Cenci said. And, it’s not clear whether they understood the restrictions on charter boats.

Often, WDFW officers find passengers have been fooled. They’ve been lied to or, being unfamiliar with charter boat laws, haven’t investigated a skipper’s claims. Sometimes, the skippers themselves might tip customers off that all is not right. They may not deliver on a promised trip or they may do something when out on the water that alarms passengers.

“Your typical passenger doesn’t really understand where limited entry charter country does exist or doesn’t exist,” Cenci said. “This investigation will demonstrate that the charter captain knew exactly what he was doing and knew what the restrictions were and made a conscious decision to ignore them.”

Still, the skipper cooperated with the officers who seized his boat. The officers later obtained a warrant to search inside the boat and saw what they believe is evidence of illegal charter activities.

“They know how to recognize these kind of things,” Cenci said about the charter boat skippers. They see an out-of-state boat come in and pick up different groups of people each morning and conclude few people have quite that many friends.

“We can spot them,” said Butch Smith, owner of Coho Charters in Ilwaco and a commissioner for the Port of Ilwaco. “None of us have any issues in turning information over to Fish and Wildlife.”

For one thing, they can’t afford to ignore the illegal operations and the “unfair competition,” Smith said, adding, “The sport industry shouldn’t tolerate it because they’re losing fishing time as a result of the illegal guides.”

He said he’s going to suggest the port make boat owners who are caught doing illegal guiding out of the port forfeit their moorage.

The Port of Ilwaco doesn’t check fishing licenses nor does it ask whether a boat in a rented slip is for business or pleasure.

“That’s not our role as a port,” said Guy Glenn Jr., port manager. But, he added, “if we see something that’s illegal, sure, we’re going to bring it to the attention of whoever it needs to be brought to.”

“They’re very good at what they do,” Smith said about the illegal operations. “When they show up en masse, they tend to close seasons down faster.”

“You can only have so much pressure on a limited resource,” Cenci agreed.