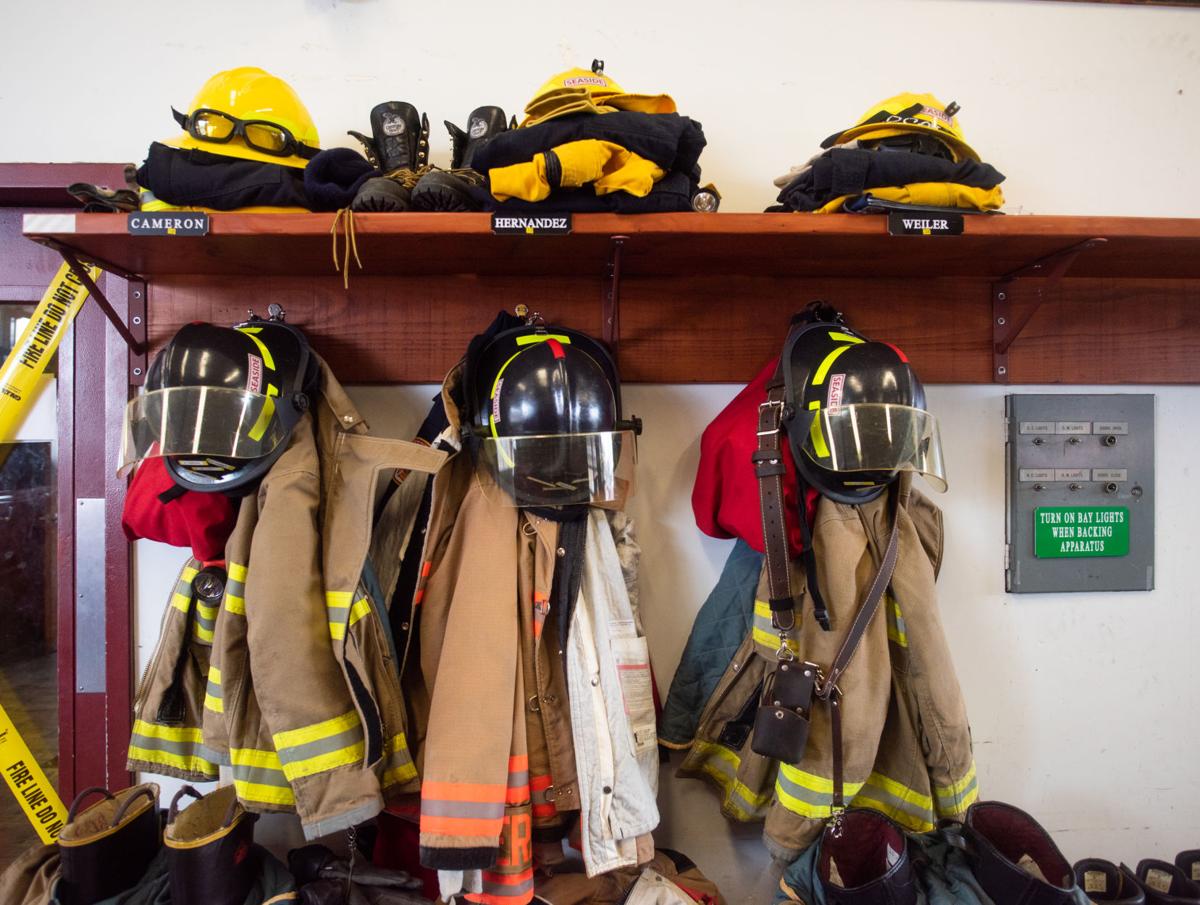 Firefighters’ coats, boots and helmets hang on the wall of the Seaside Fire Station. 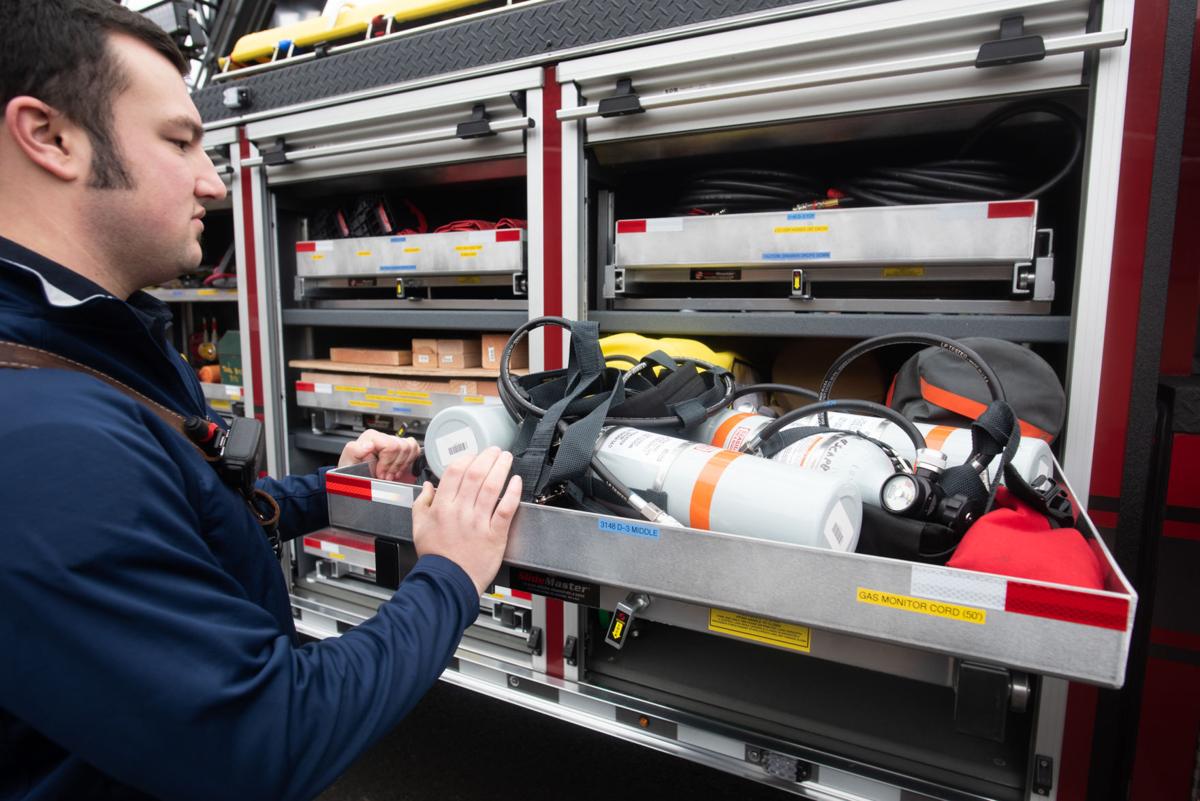 Seaside firefighter Cody Parry pulls out a drawer of oxygen tanks and equipment from the station's new fire engine during an open house on Saturday. With more resources, the Seaside Fire Department will sometimes aid the Cannon Beach Rural Fire Protection District during rescues. 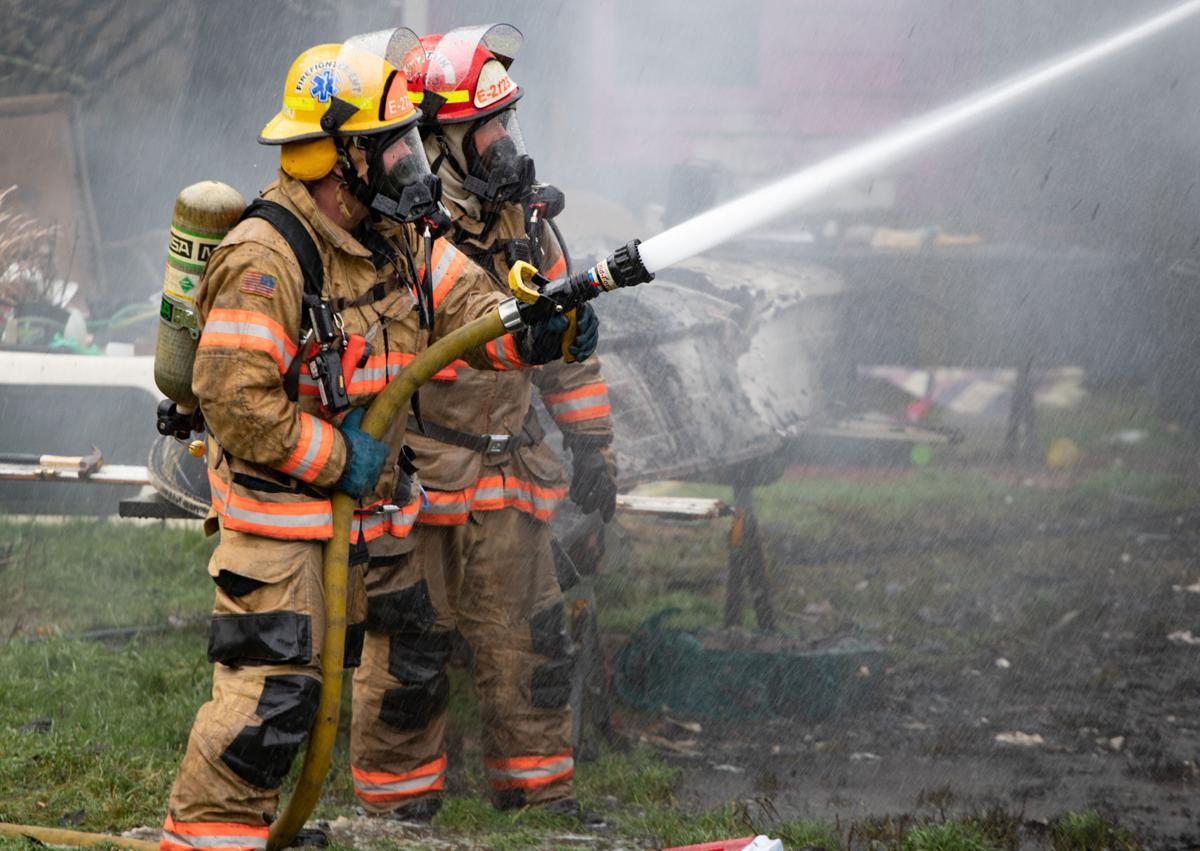 Two firefighters put out a house fire in Warrenton in December. 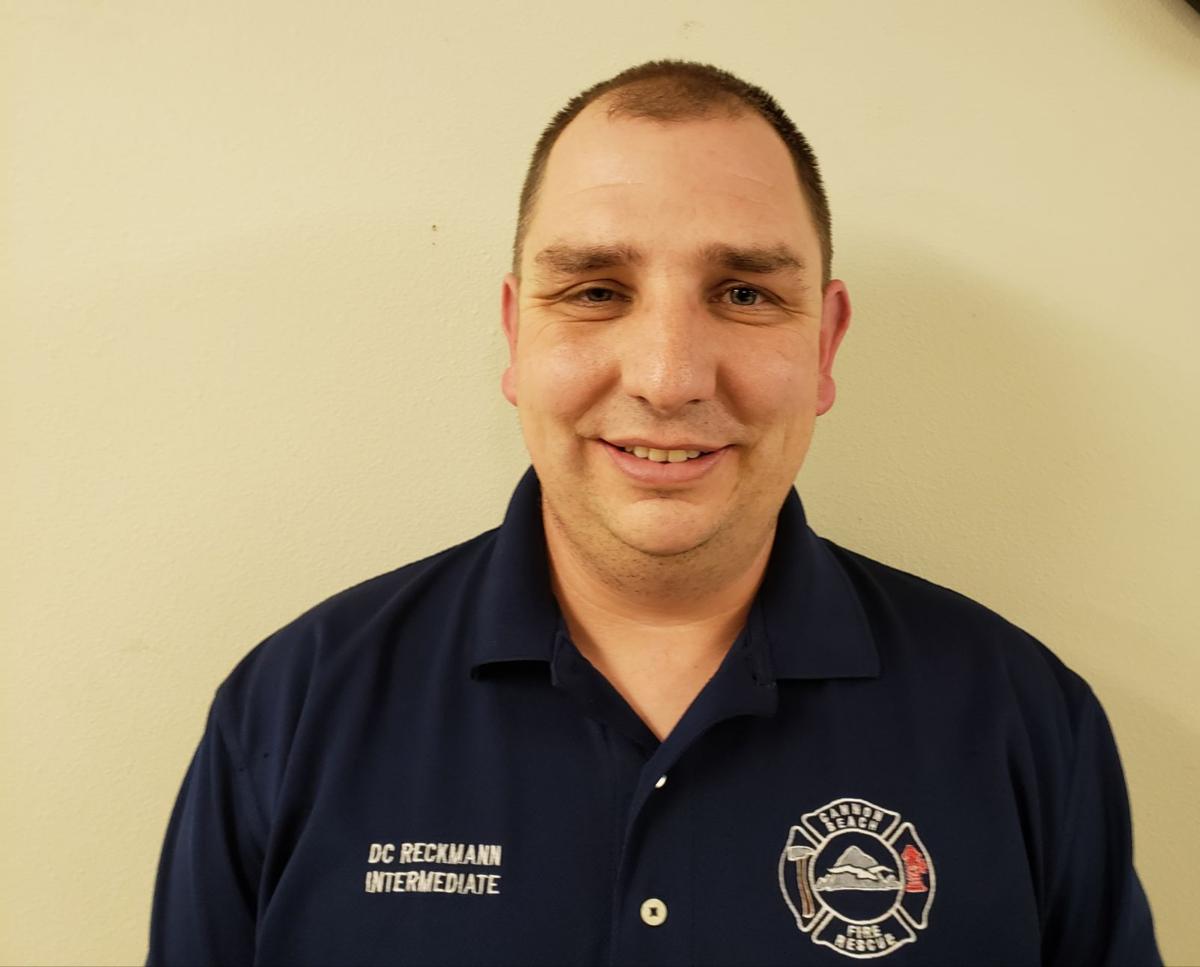 Marc Reckmann is the interim fire chief in Cannon Beach.

The struggle is not uncommon for rural fire districts. Agencies throughout Clatsop County have reported steep increases in call volumes over the past decade, along with a dwindling number of volunteer firefighters.

Staff and volunteers are left stretched thin, which has contributed to the turnover of fire chiefs in Cannon Beach.

“The old adage has always been, ‘We’re going to do more with less.’ And I think the fire service has done that, but I think it’s gotten to a point in many districts, including ours, that we just can’t sustain. We really cannot sustain functions with what we have,” said Marc Reckmann, the interim Cannon Beach fire chief.

The fire district’s board is deciding whether to ask voters to approve a levy in May.

The additional revenue is needed to hire a second commanding officer and replace aging equipment while developing a replacement cycle to reduce maintenance costs.

The board has looked at different options for funding to avoid burdening taxpayers, but options are limited.

Fire districts draw revenue from property taxes and, unlike city fire departments, cannot assess other types of taxes to keep up with growth.

Since Measure 5 was approved by voters in 1990, property tax rates became permanent. So districts are left with few options and often resort to bonds or levies to increase revenue.

Since the permanent tax rate is set when a district is formed, some fire districts have resorted to merging with one another to create a new tax rate.

An increase in calls

Since 2012, the fire district’s calls per year have increased by more than 42%. The general fund revenue has increased by 33%.

Fire districts are only legally obligated to respond to fires, yet only about 5% of Cannon Beach fire district calls are for fires. About 62% are described as rescue and emergency medical calls.

“It’s what people expect … The fire service becomes the ‘fix-all.’” Reckmann said. “Over my years here in the fire service, I’ve seen it completely evolve.”

“When you look at it, Cannon Beach is not just a little coastal community, we’re a tourism destination. And there’s only 2,200 permanent residents in the district, roughly,” he said. “We’re not having the downtime with the tourism, it’s leveled out a lot.”

Between September 2018 through August, 77% of calls were for people who do not live in the fire district’s boundaries.

“We’re spending a lot of money and a lot of time on these calls, but this isn’t the taxpayers we’re responding to, this is tourism,” Reckmann said. “They’re really putting nothing into the district.”

As tourism has increased, the number of volunteer firefighters has decreased, which has put more pressure on the volunteers and chiefs.

When Cannon Beach fire district responded to an emergency at Falcon Cove in January where two children died after being swept out to sea by a wave, Reckmann was out of town.

He said that was an example for why the fire district needs a second commanding officer.

“When our four (volunteer firefighters) got there, they started calling the resources they needed, but they also had a girl down on the beach, and they were focused on that rescue,” he said.

When the Seaside Fire Department arrived, he said, they passed command to Seaside Fire Chief Joey Daniels and he was able to lead the rescue and focus on other aspects, like communicating with other agencies, ambulances, dispatch and hospitals.

Agencies rely on each other for mutual aid during rescues, since no agency has enough volunteer firefighters and share equipment.

“They’re doing the best they can with what they have, but we’re coming to a spot where … the numbers throughout the county are low — the lowest they’ve probably ever been with volunteers,” Daniels said.

Like other agencies, he said, call volumes at the Seaside Fire Department have doubled in the past 10 to 15 years.

“All these volunteers have probably hundreds of hours of training and that’s a big commitment and most families, both parents are working,” Daniels said.

Daniels and Reckmann said paid personnel supplements the volunteer firefighters and helps make sure there is always someone who can take command during a rescue.

Paid personnel is also necessary to keep up with increasing service requirements.

“When I started in 1994 … you walked into the fire station, they’d give you a set of turnouts and pager and say, ‘Welcome aboard.’ We can’t do that anymore,” Reckmann said.

In December, Warrenton was fined $10,800 by the state for safety violations at the Warrenton Fire Department. The state investigation and fines have left other agencies looking at how they are meeting expectations.

“One of the big standards is physicals,” Reckmann said. “So, before we put anybody through any training, you’re supposed to go to a doctor and have a physical. Well, that’s $1,000, $1,500 a person and you’re supposed to be doing that annually — every person — we can’t afford that.”

“It’s important, but you have to weigh the cost of that, and where does it come from,” he said.

The fire district is working on a strategic plan moving forward with the goal of not having to rely on levies and bonds “to Band-Aid along as needed.”

“The board has done a great job of trying to keep taxes low and not keep asking taxpayers for money. But, in a way, it’s done them a disservice because now we’re where we are,” he said.

“I think we, in general, would have voter support (for a levy). But it’s going to take … a lot of education of why we need to do this.”