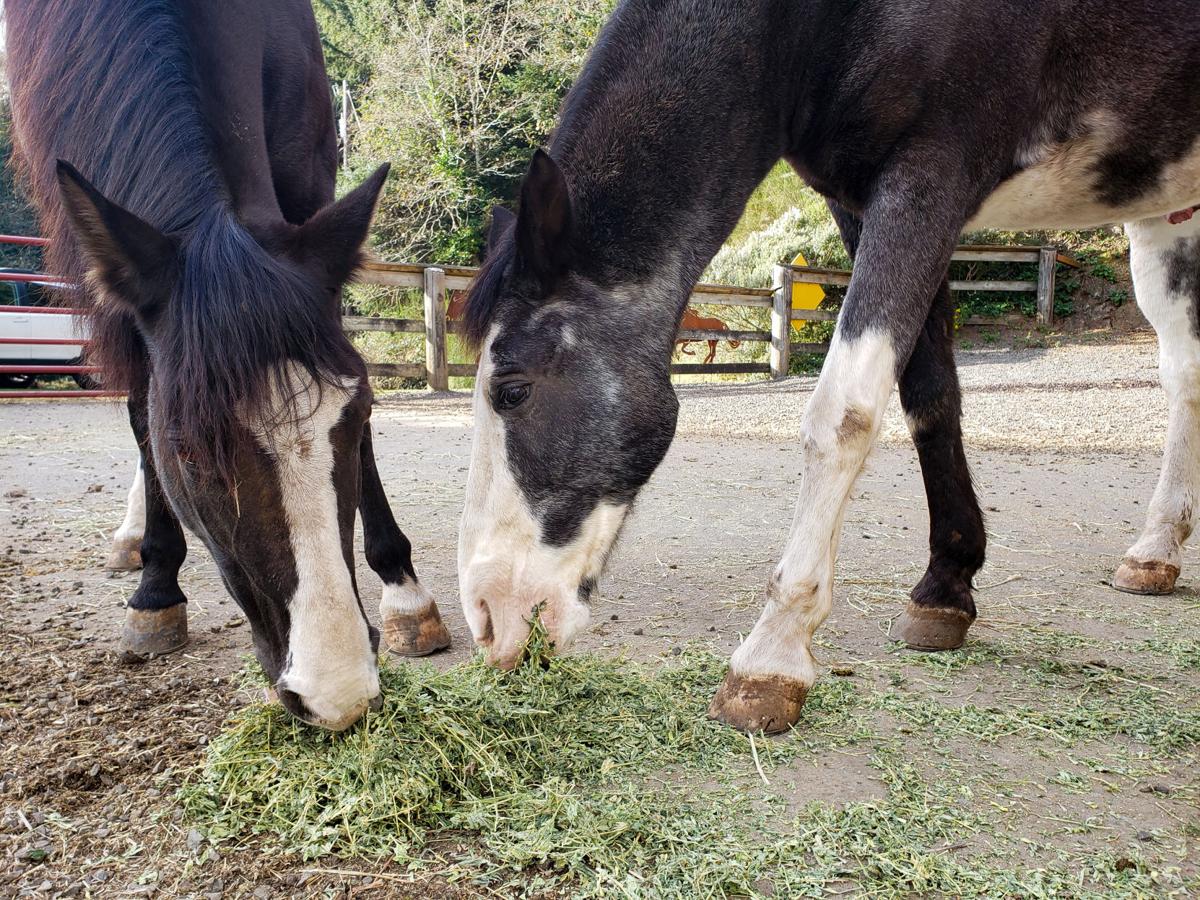 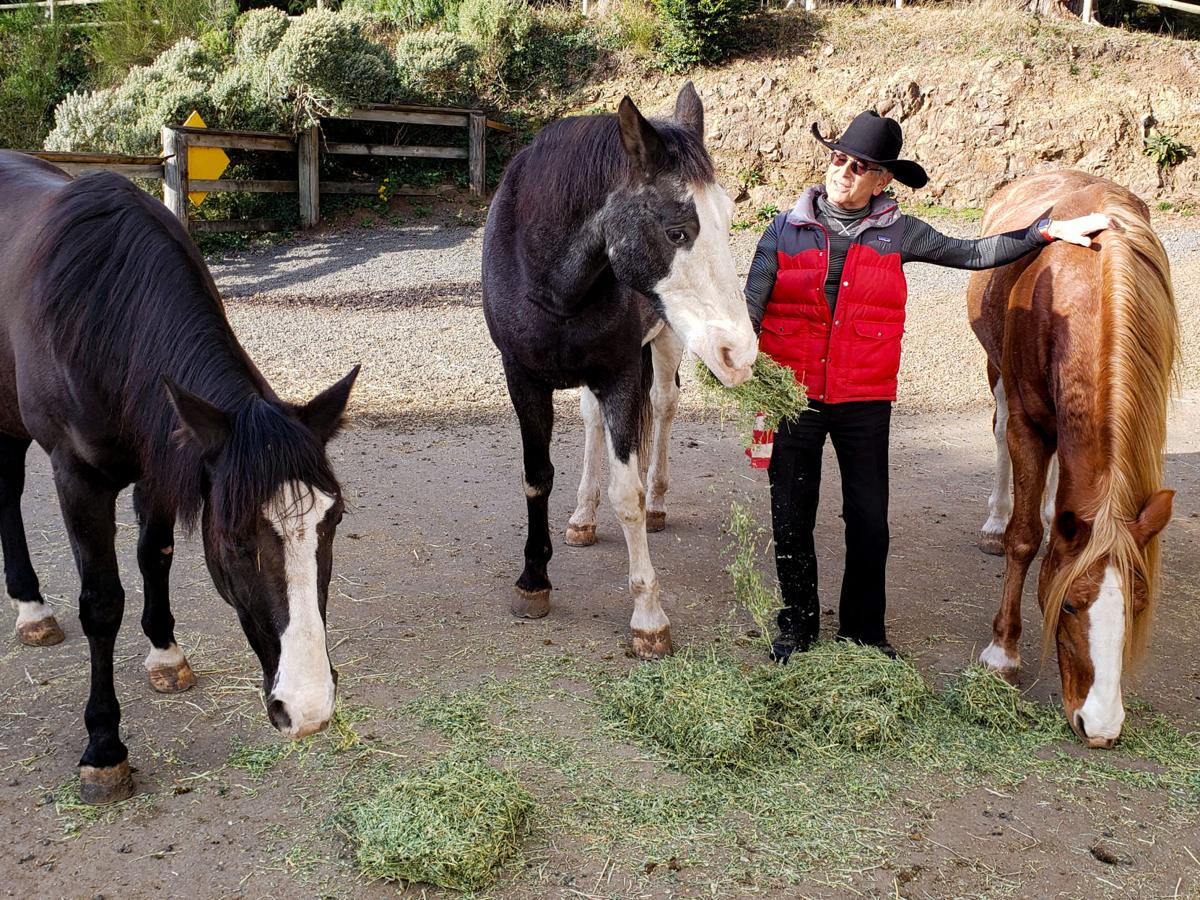 Bob Wayne feeding his horses 'The Senator,' 'Crickett' and 'Sensational.' 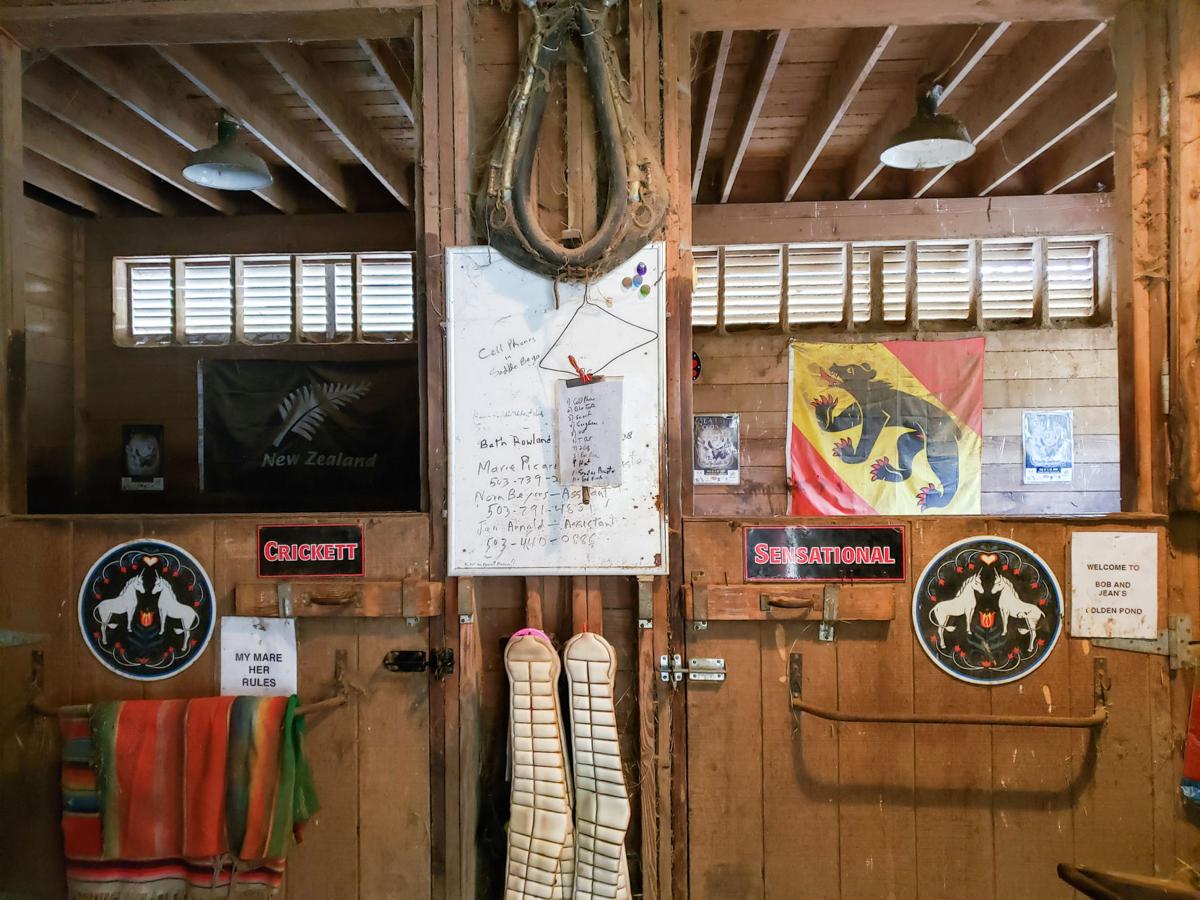 A horse stable on Bob Wayne’s property in Cannon Beach.

Wayne, 76, is a retired physician who has lived in Cannon Beach for 40 years. He and his three horses, "Crickett," "Sensational" and "The Senator," are known for riding into town and entertaining residents and visitors.

“I just ride up to a family with youngsters and I say, ‘Do you guys want to ride?’' I’ve got three riders that can carry kids. We plop them in the saddle and we go,” Wayne said. “If you would see the smiles of the kids and the delight and the fun that they have — it’s unbelievable.”

Wayne said he was surprised to learn just days before a vote that the city had drafted an ordinance that could restrict him from riding downtown.

The ordinance would require people to strap a manure-catching bag, like a diaper, around their horses as a condition. Wayne considers the bag inhumane. He said it is usually used for horses in parades, but would make a regular ride more dangerous.

“They always try to get horses off the beach … they lose every time they try to do that,” Wayne said.

The City Council voted unanimously Tuesday night to take no action and send the ordinance back to the parks division. Nearly 30 people came to the meeting, half of whom spoke against the idea. No one shared testimony in favor.

Wayne and local business owner Carmen Swigart, who owns Sea Ranch Resort Park & Stables, said they have not been included in the conversation. They also said they were not aware of the complaints.

Swigart's family has owned the resort since the 1950s. She rents her 13 horses to residents and visitors to ride on the beach. The ordinance wouldn't apply to the beach since it is under state jurisdiction, but her customers would still have to put the manure catcher on horses to walk through town to the beach.

She said she would probably stop renting horses if the ordinance is approved. She said the manure catcher is cruel to horses and may cause the horse to react, putting the rider in danger.

"I just assume that the people who suggested that have nothing to do with horses or they haven't read anything about horses," she said at the meeting.

Wayne said he does not leave manure behind. “I pick up my manure meticulously. I’ve been doing it for years,” he said.

He said he has spoken to the police about calling him when manure is found and would even accept a fine if his horses were involved.

Wayne also argued that horses should not be singled out. He cited a study that concludes horse manure is not environmentally hazardous, unlike dog poop.

"The creation of this requirement will basically eliminate all horse activity in Cannon Beach. This would be a loss to the city, a loss to all of us, residents and visitors," he said.

After his three minutes of public comment were up, he asked someone in the audience to display a manure-catching bag.

“Check this out. This is what you want to put on a horse's butt? I mean that’s going to hang off 10 pounds of manure and you expect him to ride around in it?” Wayne asked.

Many of the people commenting came to support Wayne and Swigart and the tradition of horses in the city. They cheered for each other after each testimony.

“If the cleanup was occurring like they say it is, we would not be having a problem,” St. Denis said after the meeting.

“I think the problem is primarily in the downtown area ... that’s where we’re getting the complaints.”

Wayne suspects the ordinance may be targeting him.

In a letter to city councilors, Eliza Davis, a resident who used to work for Sea Ranch, wrote there is no basis for the ordinance. She believes it is part of a long history to restrict and eliminate horses in Cannon Beach.

Davis wrote that Wayne and Sea Ranch are being singled out and said Wayne is the only local resident she knows who routinely rides horses through town, with the exception of parades.

"He usually has his famous red something or other going on," she told the City Council. "It's attractive and delightful and I know he's very responsible about picking up after his horses … I think it adds to the charm of the city and I think there's got to be another way other than using those ridiculous buckets to manage any kind of manure problem you seem to have."

Are you planning a tour family reunion when running across this article.Coming from OK and next fall we chose Cannon to be a part of our family history .I read horseback riding was available. We have 7 children. Three grown and 4 at home. We really were excited about the therapeutic angle of riding near/on the beach. I hope all this will be Reconciled before our family reunion next fall.

Looking forward to our stay in Cannon 😃