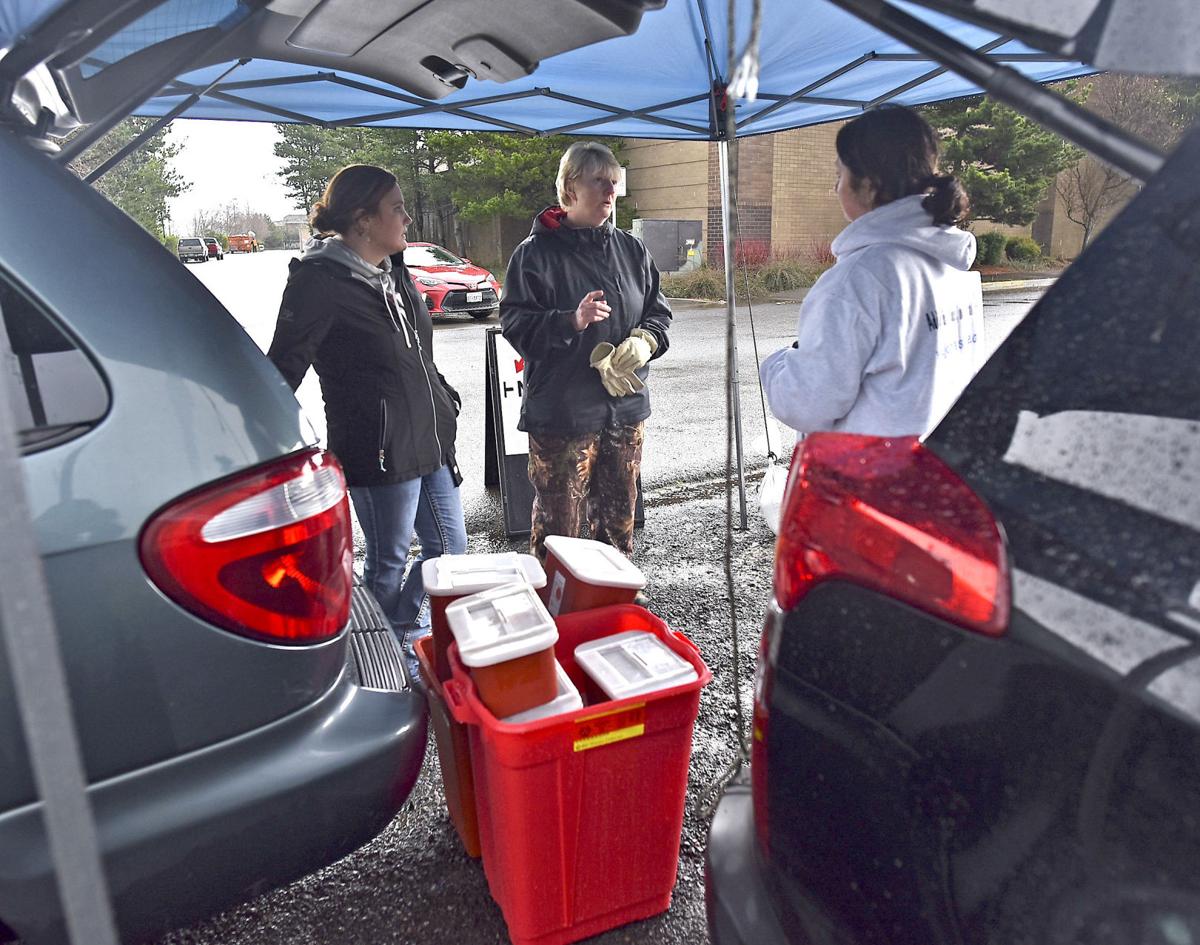 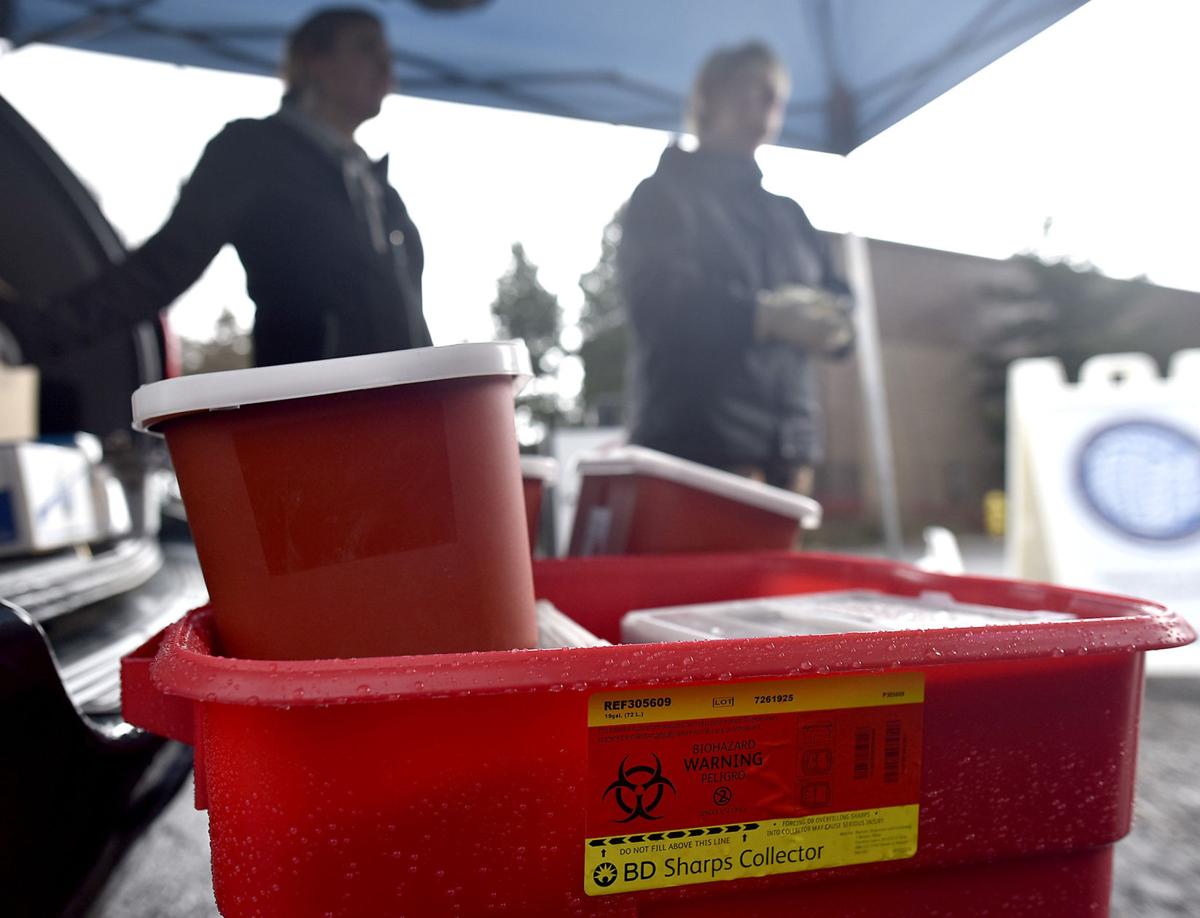 Medical supplies sit ready for distribution at a needle exchange program in Astoria. 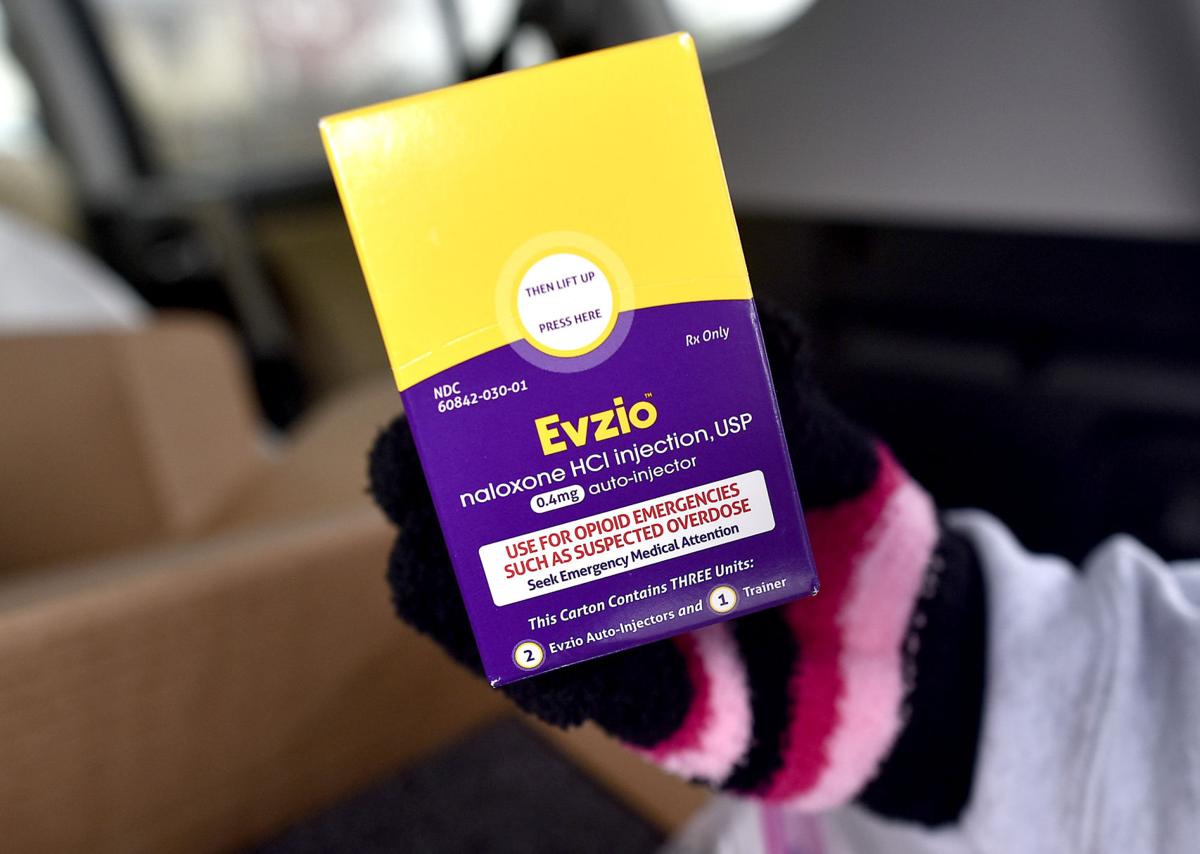 Kerry Strickland holds up a box of naloxone for treating opioid overdoses. 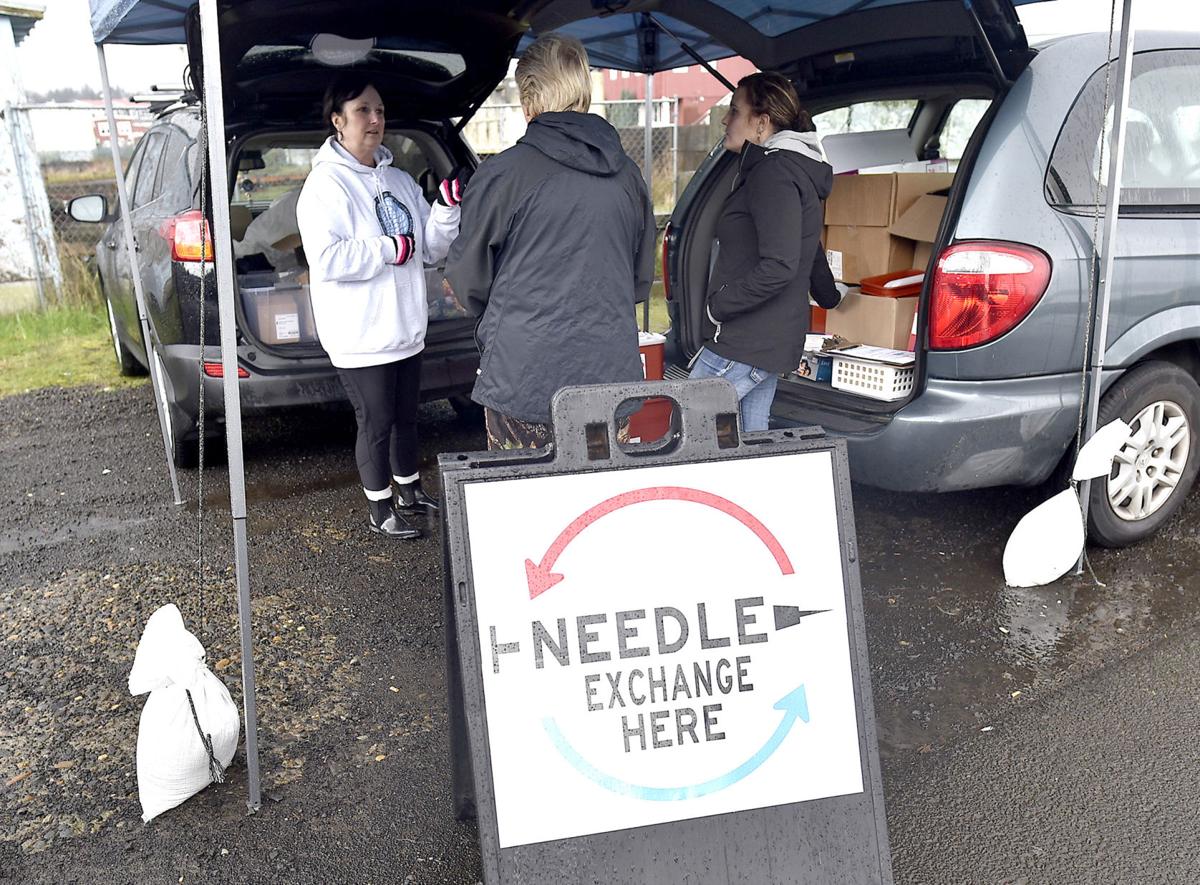 Kerry Strickland, Sheri Salber and Sarah Mitchell wait for people to show up at a needle exchange in Astoria. 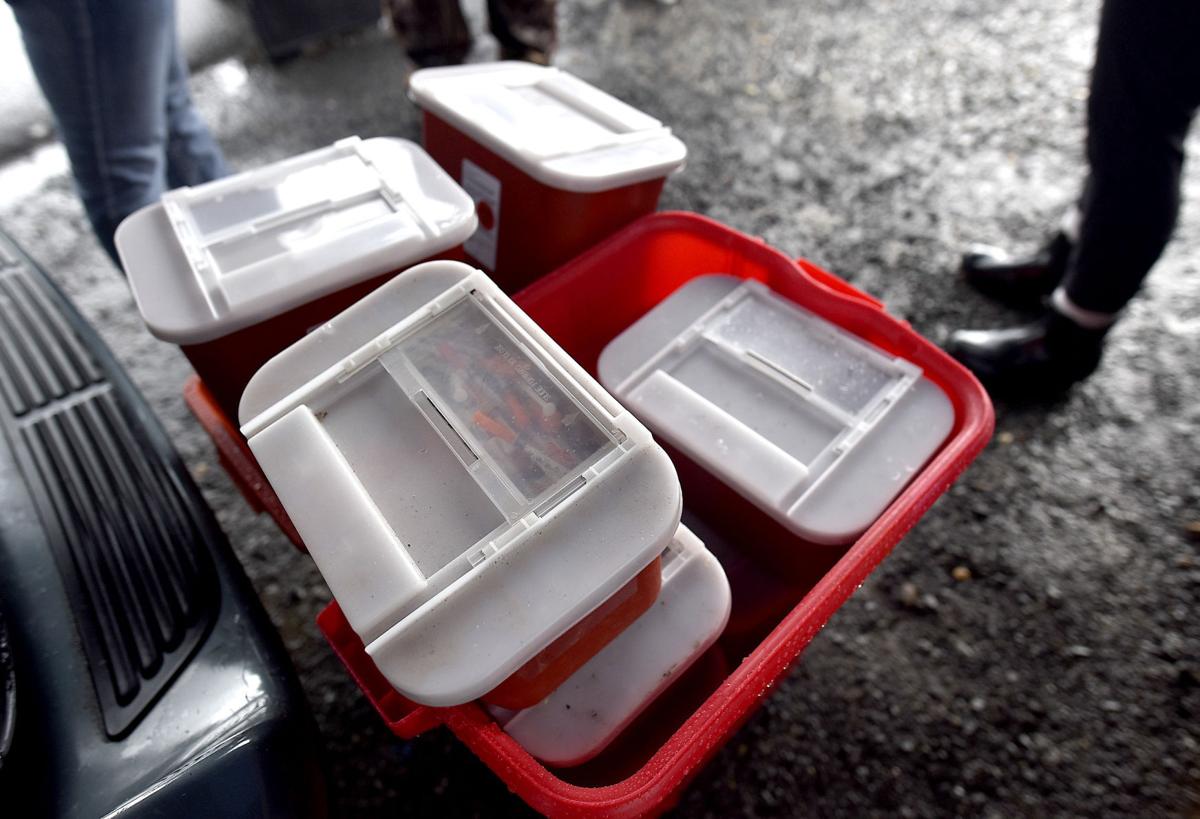 Clean, new needles and containers wait to be distributed at the needle exchange program in Astoria.

Medical supplies sit ready for distribution at a needle exchange program in Astoria.

Kerry Strickland holds up a box of naloxone for treating opioid overdoses.

Kerry Strickland, Sheri Salber and Sarah Mitchell wait for people to show up at a needle exchange in Astoria.

Clean, new needles and containers wait to be distributed at the needle exchange program in Astoria.

Kerry Strickland has been giving mothers an ability she wishes she had years ago.

Her son, Jordan, died alone in a Southern California apartment in 2015 when he was 24 years old. Had someone given him Naloxone — a drug that reverses opioid overdoses — he might have had a chance to recover.

Now, she offers weekly training teaching people how to administer the drug, and some of the students have been fellow mothers.

“There’s nothing more rewarding than being able to hug a mother and give them the lifesaving drug I couldn’t give my son,” Strickland said.

A six-month pilot needle exchange program in Clatsop County is gaining momentum and expanding — including the Naloxone training — as the experiment passes its halfway point.

The county Public Health Department and Strickland have been conducting the weekly exchanges since October. After the first event yielded no takers, the county has collected more than 15,874 needles and handed out 14,419 in trade.

“It’s a little shocking that there are that many needles being used for intravenous drug use in this county,” Michael McNickle, the public health director, said. “We’re still pretty amazed at the numbers we’ve been getting.”

The numbers are staggering for a county of fewer than 40,000 residents, but Multnomah County — with more than 790,000 people — exchanges roughly 30,000 needles a week, McNickle said.

The largest haul came last week, when 4,000 needles were exchanged. Several people — commonly referred to as “messengers” — have been collecting and exchanging the majority of needles each week, McNickle said. Since the beginning, 33 people have participated ­­­­— 15 of whom returned for at least a second time.

“We built trust in Astoria and the messengers are getting the word out,” McNickle said. “Every week is a little different due to the shame that comes with the stigma of intravenous drug use. You’re not sure if the messengers are also the users.”

Strickland, founder of Jordan’s Hope for Recovery, began offering the free Naloxone kits and training four weeks into the program. After completing the training herself, she applied for grants through her nonprofit that allowed her to receive and distribute the drug at no cost.

So far, 30 Naloxone kits have been provided. The kits also include gloves, a face shield, alcohol pads and a wallet card that explains good Samaritan laws.

“It’s a great add-on to our program,” McNickle said. “Even if you’re not there to exchange needles, you can get training at no cost.”

Information about rehabilitation opportunities is also available at the exchange events. Since October, they have received unconfirmed reports of three people who say they have entered a rehabilitation program.

“That’s always our goal — to connect people to the resources and help them get out of the situation that they’re in,” Strickland said. “We treat them with human kindness. There’s such a huge stigma with those who struggle with abuse.”

The county will also conduct exchanges outside Providence Seaside Hospital beginning Feb. 1. The hospital agreed to facilitate the events through the end of the pilot program in April.

“It’s proven to reduce the number of patients among those who use the drugs,” said Providence spokesman Mike Antrim. “It’s definitely a vulnerable population, and it’s a good partnership with Clatsop County Public Health.”

The county at one point held exchange sites across the street from Quatat Park in downtown Seaside, but city officials were concerned about the optics, McNickle said. The park is located near tourist attractions and hotels.

“The city of Seaside had some issues with that spot, so in order to honor those concerns, we searched for a different location,” McNickle said.

The upcoming events are scheduled to take place Thursday from 11:30 a.m. to 1 p.m. in a parking lot near the emergency room. The location is designed to allow people to participate in the exchange from their cars, which has become a common practice at the Astoria site.

“This is a huge step forward and we are very excited about this partnership,” McNickle said.

County commissioners unanimously approved the pilot program — funded through a $50,000 donation from the Friends of Columbia Community Health — in August.

The outreach was met with skepticism from law enforcement officials, who questioned its effectiveness and expressed concerns that it may lead to other drug policies that enable abuse.

But those officials — namely Sheriff Tom Bergin and District Attorney Josh Marquis — agreed not to attempt to block the program.

Those hosting the events have received mostly positive feedback, save “a few head shakes,” Strickland said.

“The community support has been overwhelming,” Strickland said. “I have a lot of gratitude for these people.”

McNickle plans to present results to commissioners once the program expires in hopes the county will make the exchanges permanent. The program has shown the scope of drug abuse in the county.

“It doesn’t necessarily speak to what we’re doing. It speaks to the need,” Strickland said. “It’s bittersweet to see how successful it has been.”