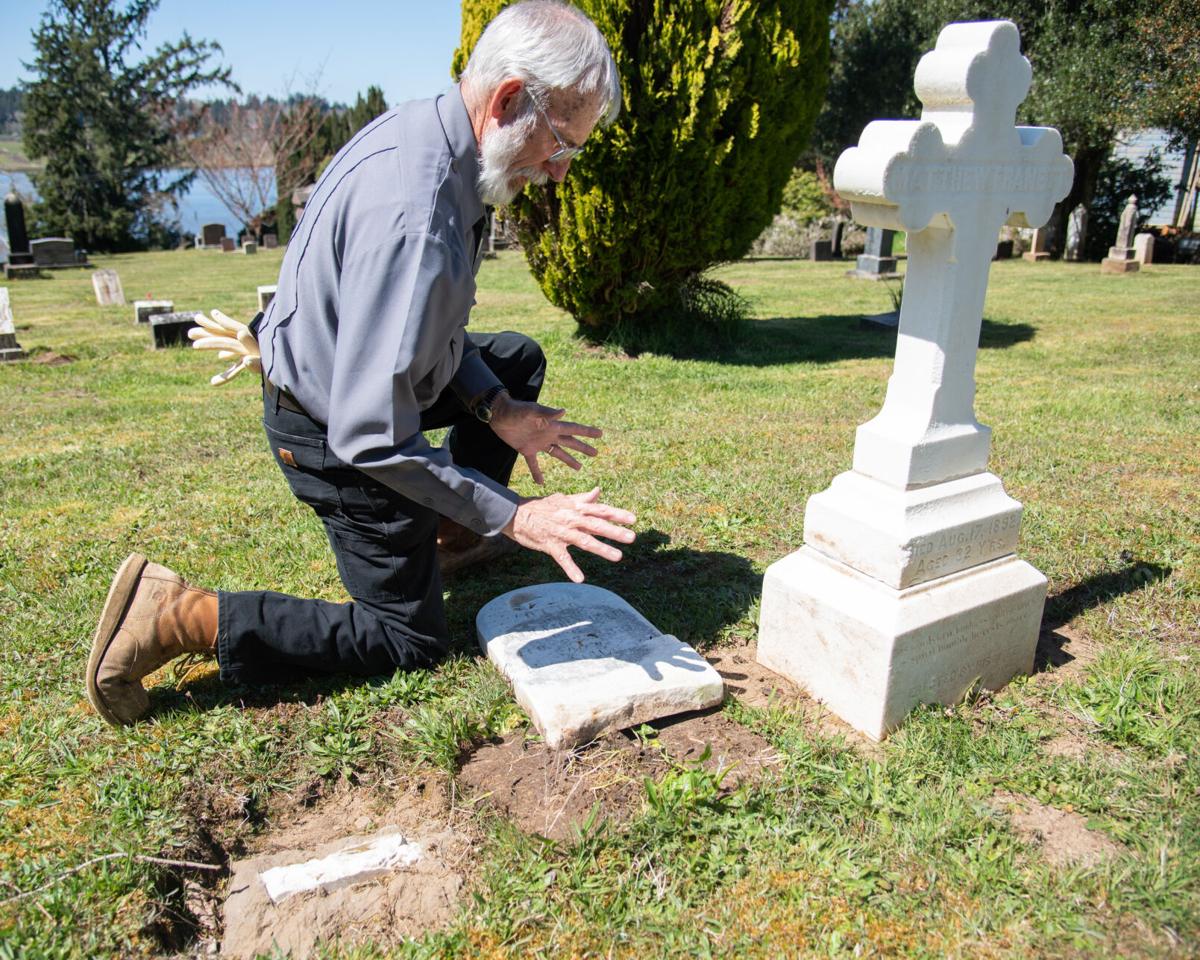 Mike Leamy discusses repairing a tombstone that has fallen over at Greenwood Cemetery. 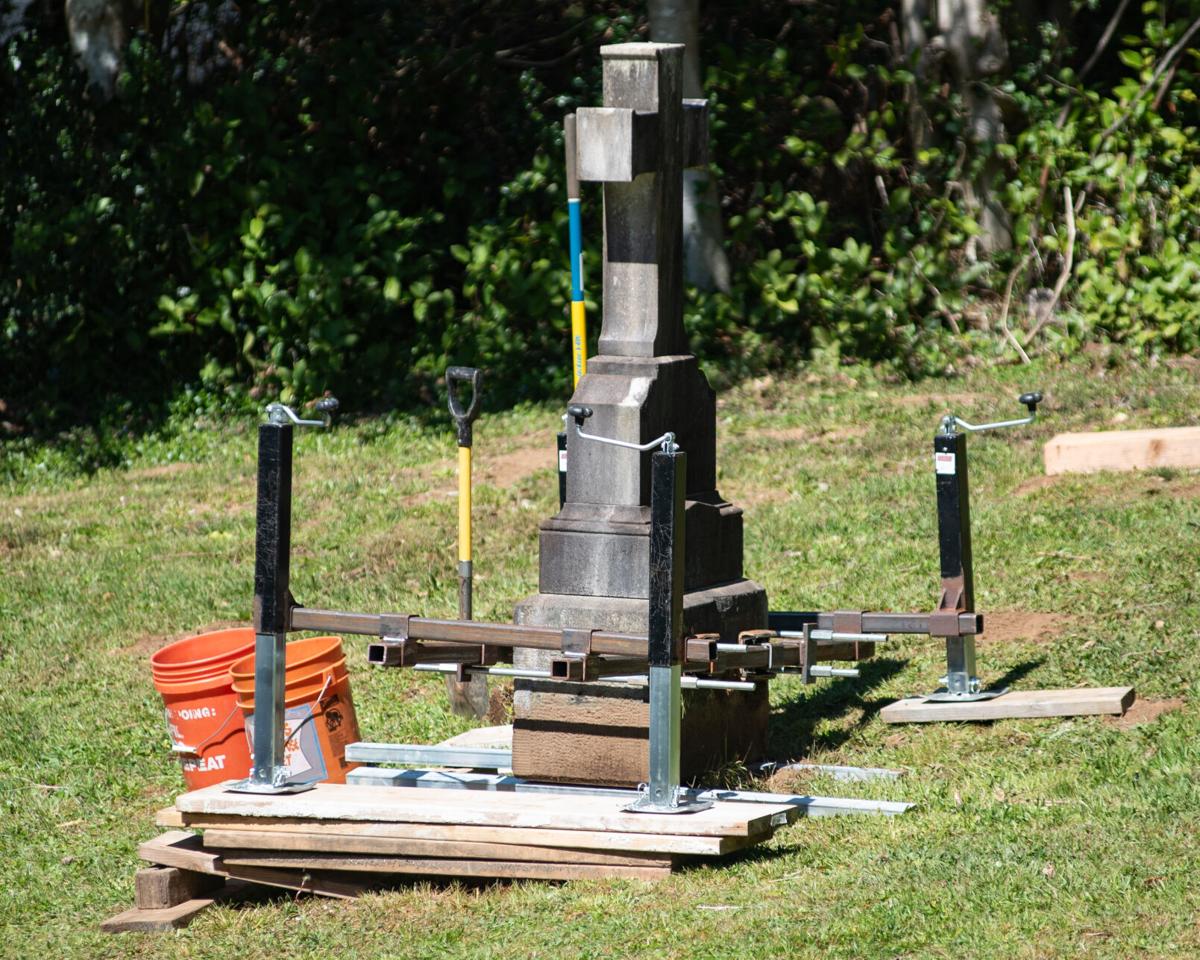 A device holds up a gravestone as Mike Leamy repairs it. 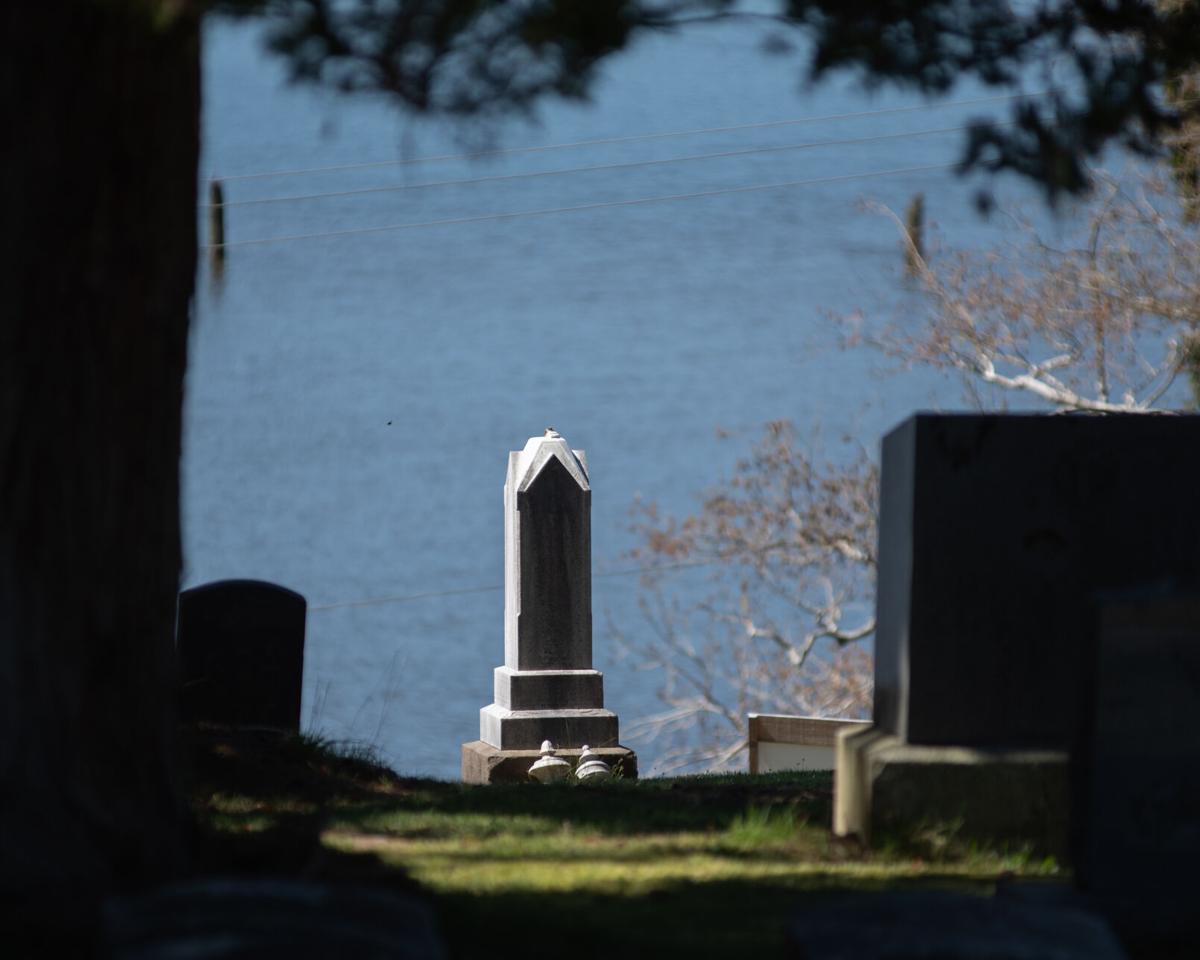 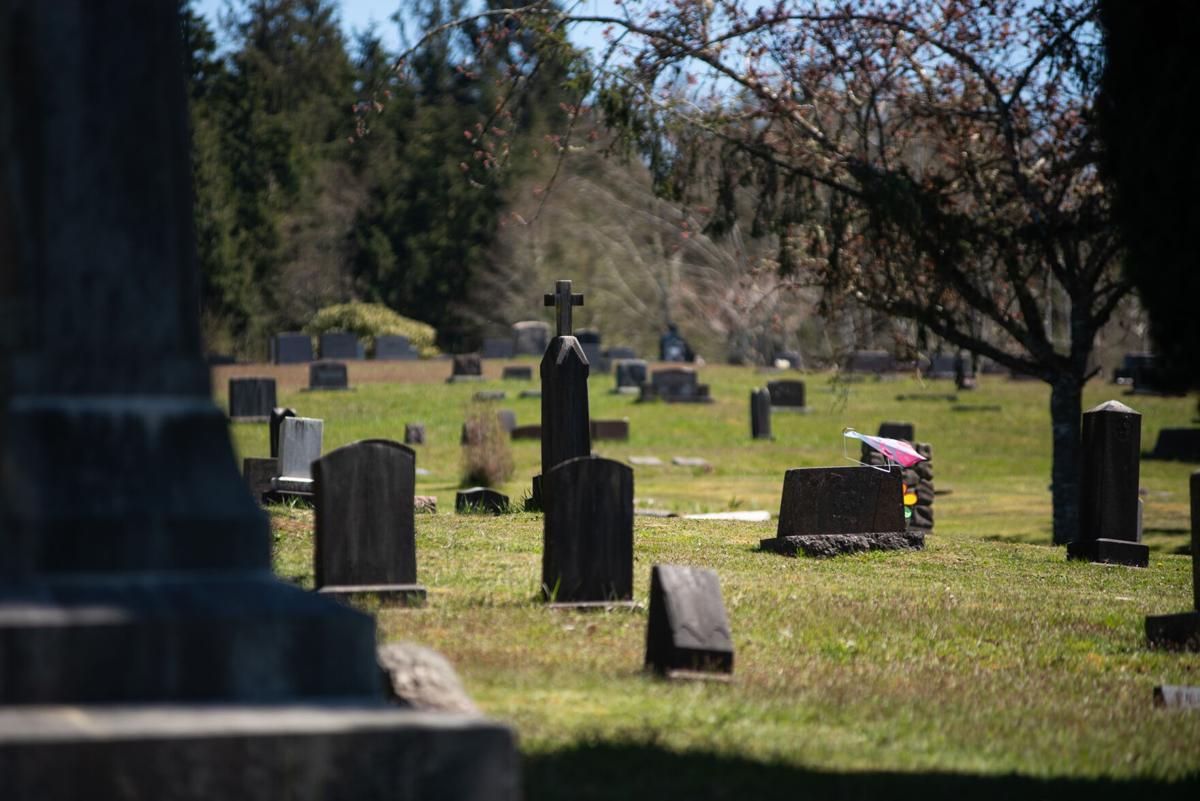 Thousands of people are buried at the cemetery. 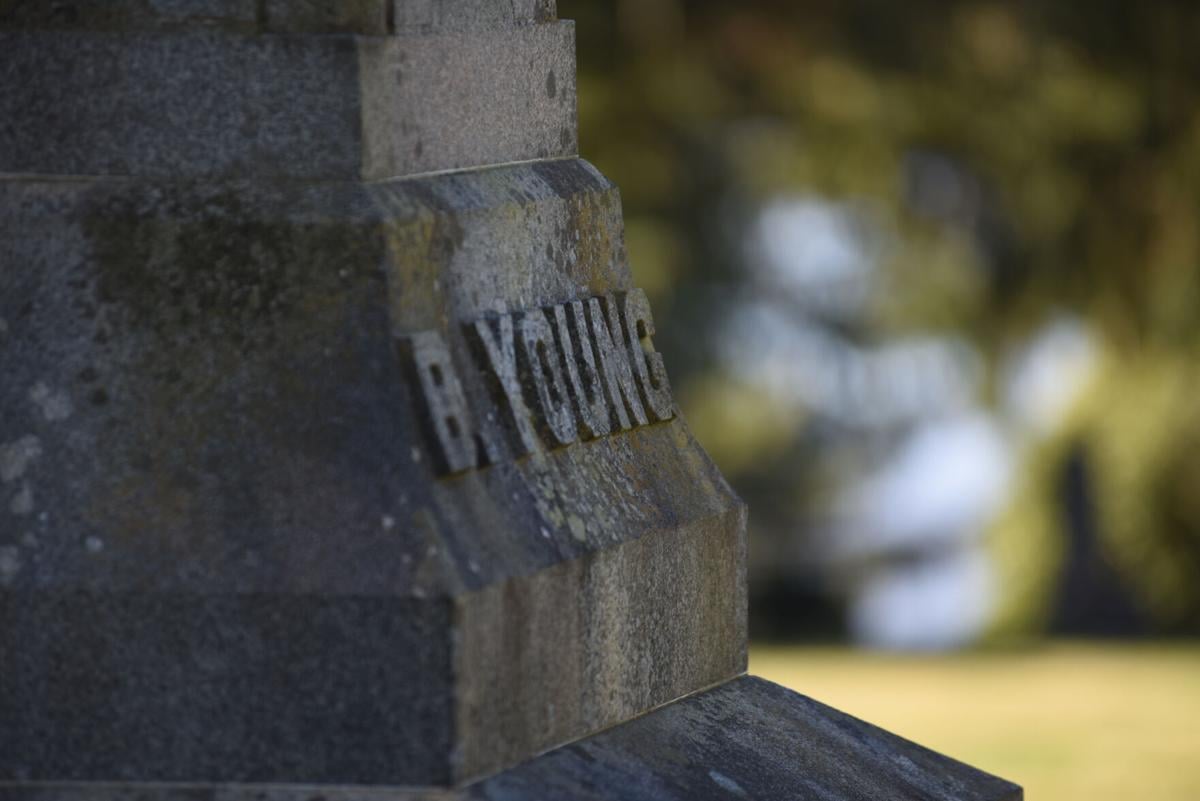 Mike Leamy pauses on the slopes of Greenwood Cemetery near Olney, places a deliberate hand on the pinnacle of a grave monument from the late 1800s and comments, with an eye out to the horizon but a quick glance back at his audience: “I knew it would be a massive undertaking, but I didn’t think it would be such a monumental task.”

He chuckles to himself and pats the monument lightly, just in case you missed the pun.

But there’s truth folded in with the joke.

When Leamy and his wife, Lynda, purchased the historic but still active cemetery from the Caldwell family in the early 1980s, they didn’t know anything about cemetery management. All they wanted was a place in the country where they could raise their boys and tend to their animals. Greenwood Cemetery, on a hill overlooking Youngs River, was a beautiful and affordable option.

They moved into the house on the property just in time for Memorial Day and the dizzying crush of people and bouquets that descend on cemeteries at that time of year to honor the dead.

Now, decades later, they can tell you the stories of many of the deceased occupants. They are finishing up a restoration project that will ensure some of the oldest parts of the historic cemetery will remain intact for generations to come.

Last year, the couple received a grant through the Oregon Commission on Historic Cemeteries for work to straighten, clean and repair leaning, loose and toppled tombstones in the oldest section.

As the Leamys note in a video about the restoration they began last year: 130 years can do a lot of damage.

Opened as a cemetery in 1891, Greenwood also houses monuments, markers and remains from Hillside Cemetery — formerly Pioneer Cemetery — in Astoria that date back to even earlier years. Some of Astoria’s founders, previously buried in Astoria cemeteries, now rest in Greenwood.

Subject to wind, weather and tree roots, monuments and markers tumble as materials deteriorate and soil shifts or tree roots intrude and moles tunnel. Passing elk herds have trampled through at least one monument.

Under the terms of the grant, the Leamys set out to restore 45 monuments. They have since exceeded that goal; they restored more than 60.

“We’ve got the bug,” said Lynda Leamy, adding, “We always wanted to do something but there was never time.”

The cemetery may be historic, but it is still active, with more than two dozen services a year and around 6,000 spots still available. Mowing occupies much of the Leamys time in the warmer months.

Now, not only do the restored graves look better and present less of a safety hazard, they’re also easier to mow around. In some cases, the Leamys have unearthed things they never expected were lurking underground: a poem engraved at the base of a monument that had sunk into the ground; decorative work around other monuments; entire markers.

Mike Leamy also got to deploy a device of his own invention, the four-cornered multiadjustable monument jack. This lifter grips and raises a monument and holds it in place while Leamy works below to level the monument’s foundation.

It is a far better option than the pry bars and cheater pipes he had had to wrestle with in the past.

“Once it is assembled around a monument, one person can raise a memorial weighing more than a ton or two,” he said.

The Leamys had hoped to draw on a volunteer force to help with the “monumental task,” but the coronavirus pandemic changed those plans. Instead, cemetery staff — mostly Mike Leamy — tackled the bulk of the work, with volunteers pitching in here and there.

It is worth all the effort, the Leamys say. There were safety considerations — some of the old monuments are little more than rocks stacked on top of each other. Mike Leamy barely has to nudge one leaning monument to angle it back off of its base.

The ins and outs of preserving historic markers and monuments presented a big learning curve, Mike Leamy said, but it has only motivated him to learn more about the stories of the cemetery’s residents.

Greenwood is a perpetual care cemetery, which, Mike Leamy says, mostly means you’re “perpetually at it.” But through their tireless work, the Leamys feel they are engaged in the important task of preserving stories.

They have a map of every plot in the cemetery. On that map, there are many unmarked graves or graves where the occupants are noted as “unknown.”

Still, Mike Leamy said, “Every stone here represents someone’s story. There might be documentation or someone who remembers them, but some of them took their stories with them. But their remains are still here.”

And that’s a type of story, too.