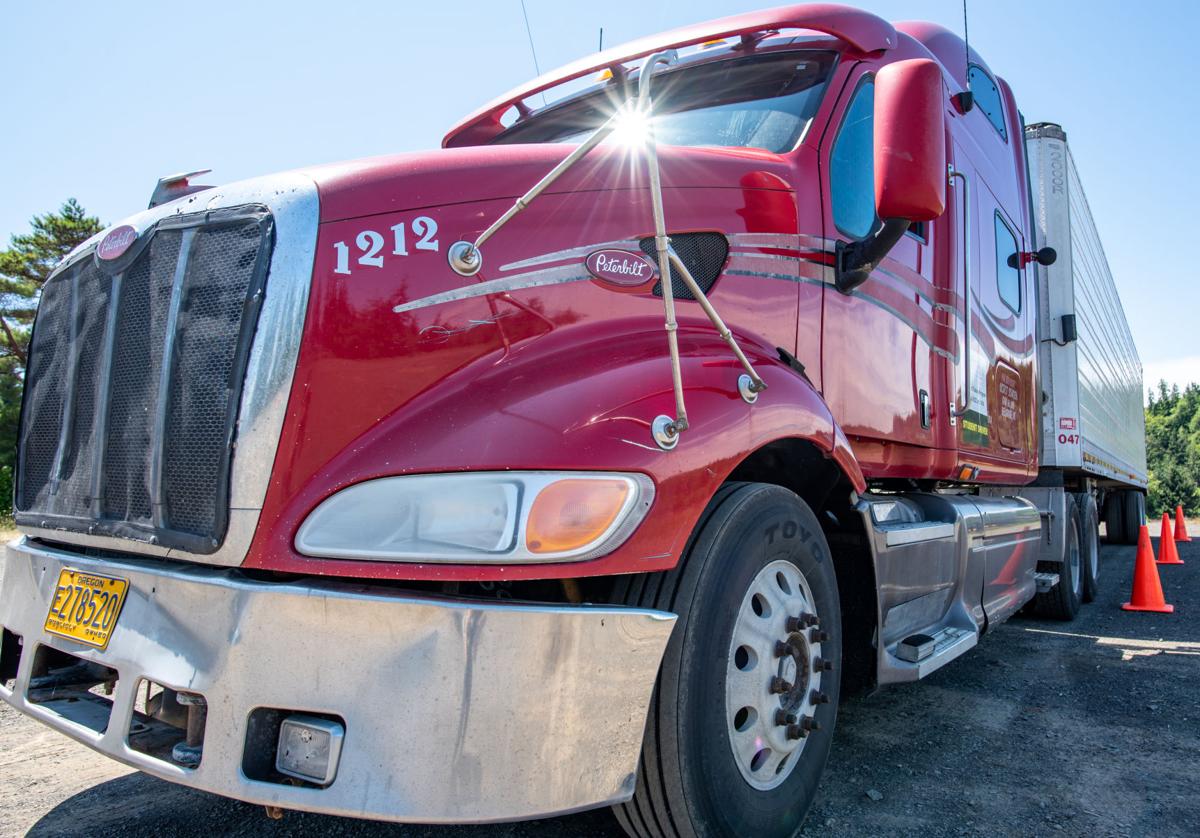 The Peterbilt semitruck was sold to the college program for $10,000 for students to practice driving large commercial vehicles. The 48-foot refrigerated trailer was donated by the Tillamook Creamery. 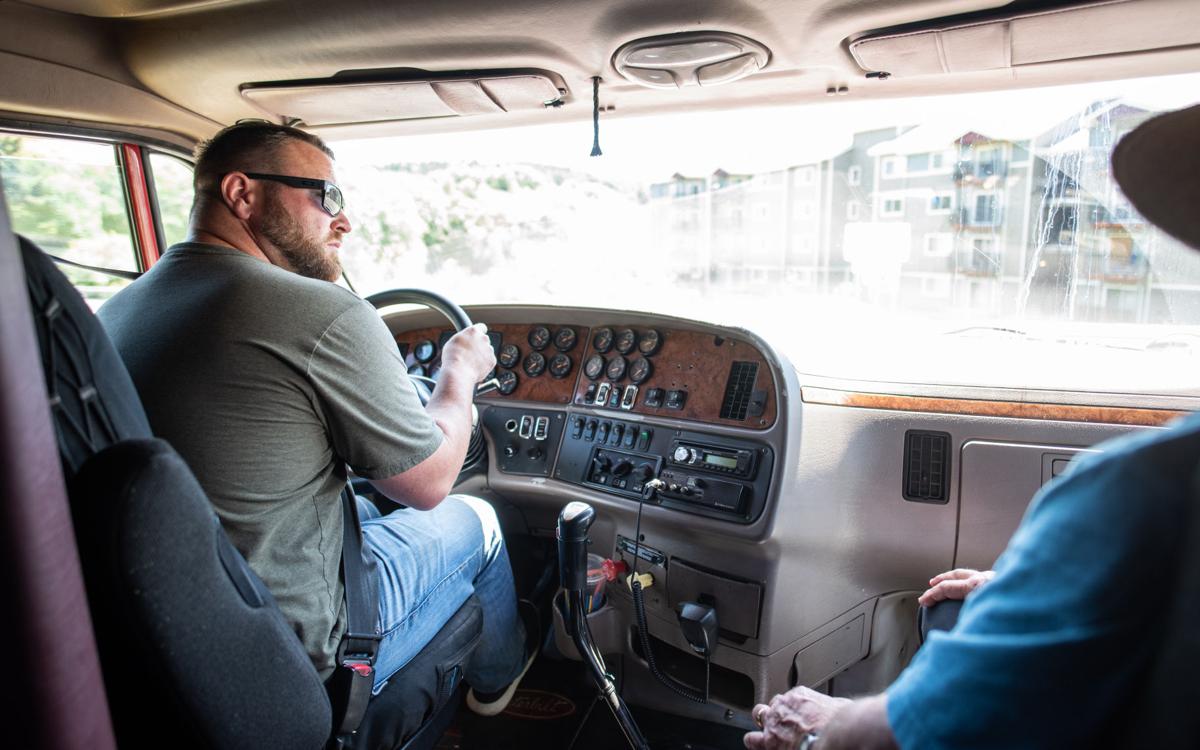 Austin Rieck, left, drives a semitruck under the supervision of retired long-haul driver James Crowe. The four-week course is run by Clatsop and Tillamook Bay community colleges, providing students the opportunity to get a commercial driver's license. 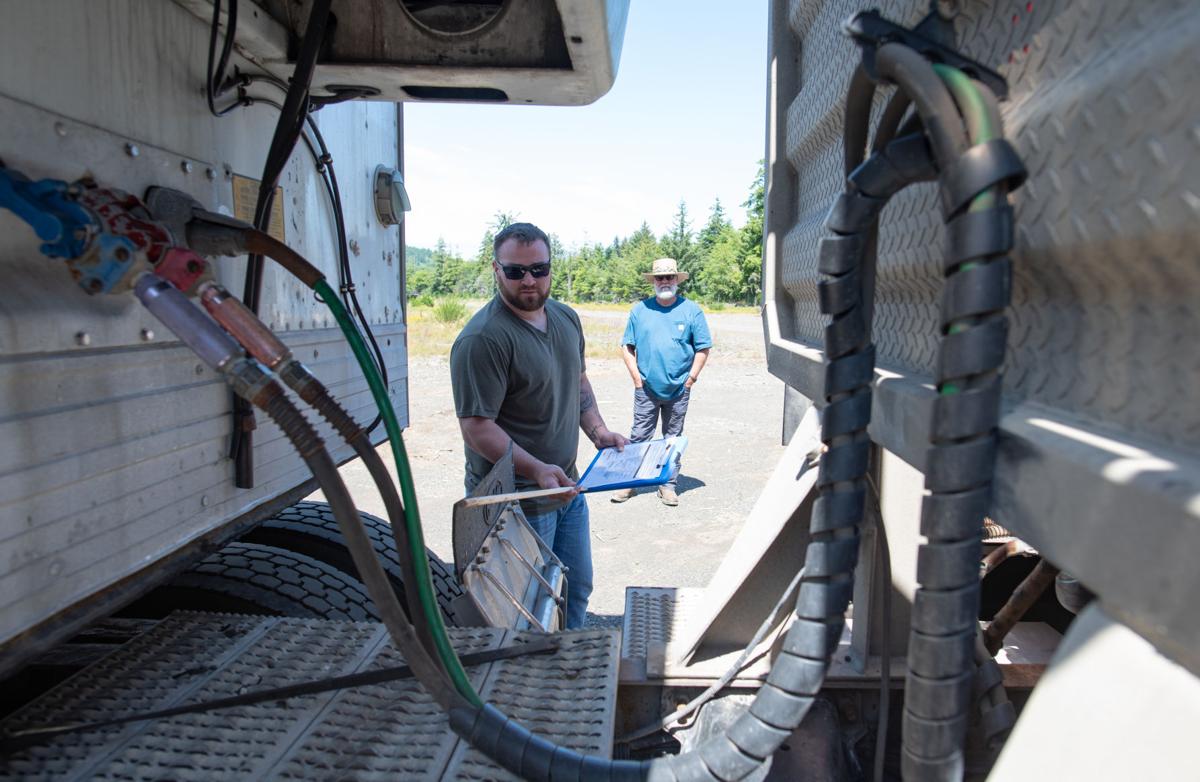 Austin Rieck runs through an inspection, checking the trailer connection to the semitruck, while instructor James Crowe watches and tests his knowledge.

Cars lined up behind Austin Rieck as he idled just off U.S. Highway 101 Business on Monday, waiting for a clear stretch of road to pull out in his Peterbilt semitruck, pulling a refrigerated trailer.

“Once you accept you can’t just pull out and go fast, it makes everything easier,” Rieck said.

Rieck, a former meter reader for Pacific Power, is in the second class of students going through a new commercial truck driving program started this spring in partnership between Clatsop and Tillamook Bay community colleges.

“It’s one more thing on your application that sets you apart from most,” Rieck said.

Rieck faced traveling to Portland for training, but learned of the program through Tillamook Bay, started in response to industry demand for more drivers.

Crowe, a retired long-haul trucker with 34 years and 4 million miles under his belt, sends students through a full-time, four-week course preparing for the commercial driver’s license exam at the Department of Motor Vehicles office in Tillamook.

He spends the first week in the classroom teaching about safety, rules and the trucking industry. Students then spend three weeks learning to inspect and drive the Peterbilt in a gravel lot provided by Warrenton Fiber.

The Peterbilt comes with a 13-speed transmission that Crowe teaches students to properly shift using double-clutching. He teaches them to back up the 48-foot truck and trailer straight and at angles. They go on ever-expanding runs along county roads, through urban areas and down highways.

Crowe sits calmly next to students, giving pointers and observing, ready to pull a valve that immediately stops the truck. Beyond the technical aspects of driving, he reminds the students they are professional drivers who must always take the high road.

“We need to project an image of trucking that doesn’t make people feel unsafe or angry,” he said.

Crowe’s initial batch of four students this spring all got their commercial licenses on the first try. Tim Kindred, a commercial fisherman for the past 25 years, bought a dump truck and began his own transportation company delivering rock and other landscaping products.

“I kind of always wanted to be a truck driver,” he said. “Commercial fishing has been going downhill.

“I wanted to stay local, just because I have two little kids. That’s why I got the dump truck. It’s a great return on your money.”

Everyone who passes the commercial exam has had job offers within a few days, Soto said.

Tillamook’s program has been buoyed by donations from the transportation industry, including the first of its three trucks and a refrigerated trailer. The program recently secured grant funding for a truck-driving simulator.

“CCC didn’t have the capacity within their existing staffing, or the equipment,” Soto said of Clatsop Community College. “They asked to partner with us.”

The class costs $5,000, with some grants available. Kindred and Rieck see the fee as a pittance compared to the jobs available to commercial truck drivers. Nearly 100 truck drivers employed in Clatsop County averaged a salary last year of more than $48,000, according to state data — more than $53,000 statewide.

The growth in trucking jobs statewide leveled off in 2016 after a six-year, post-recession spurt, according to state data. Census data shows more truckers than ever. But industry leaders still see a growing shortage, mostly in long-distance carriers. The American Trucking Associations estimates the shortage of drivers could balloon to nearly 180,000 by 2024.

“Right now, there’s probably a shortage of 50,000 truck drivers in America,” Crowe said. “There are tons of jobs out there.”