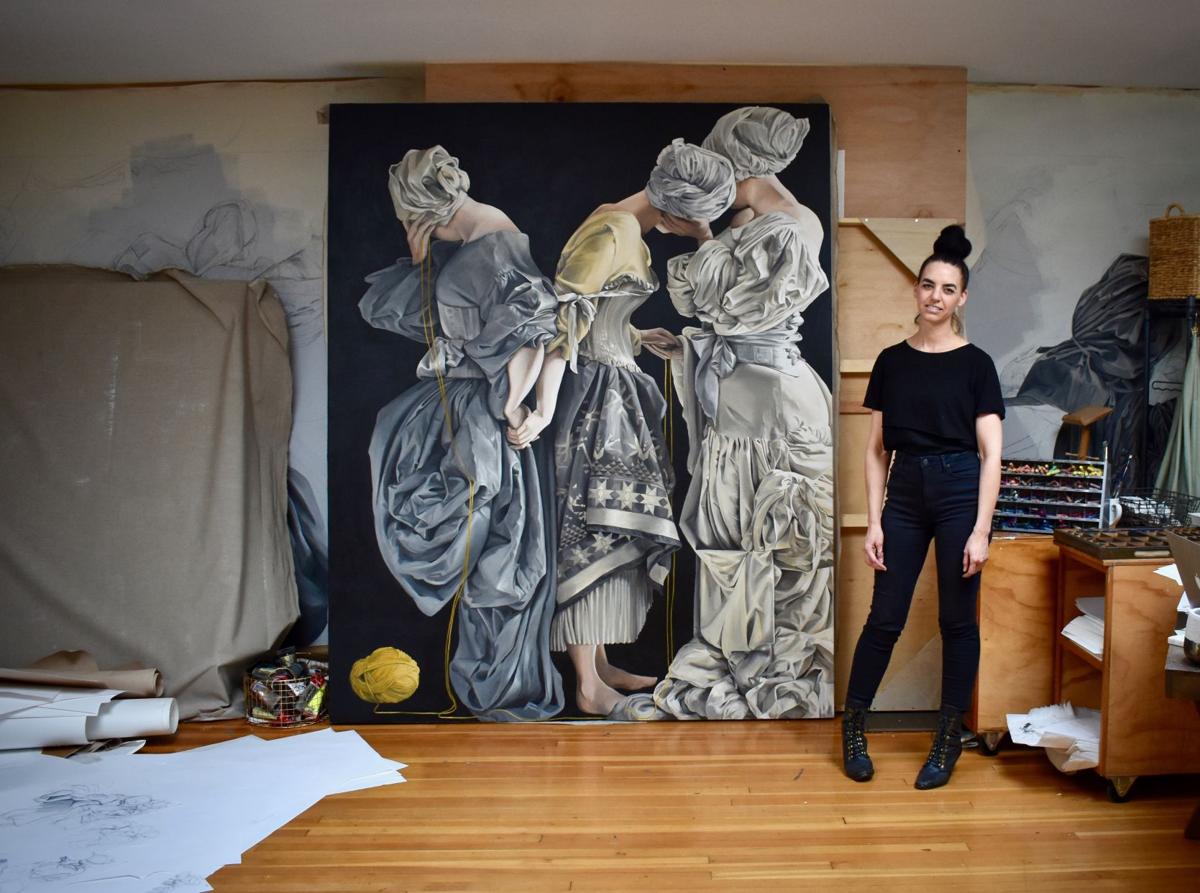 Meghann Hanour is a local artist who tells stories through paintings. 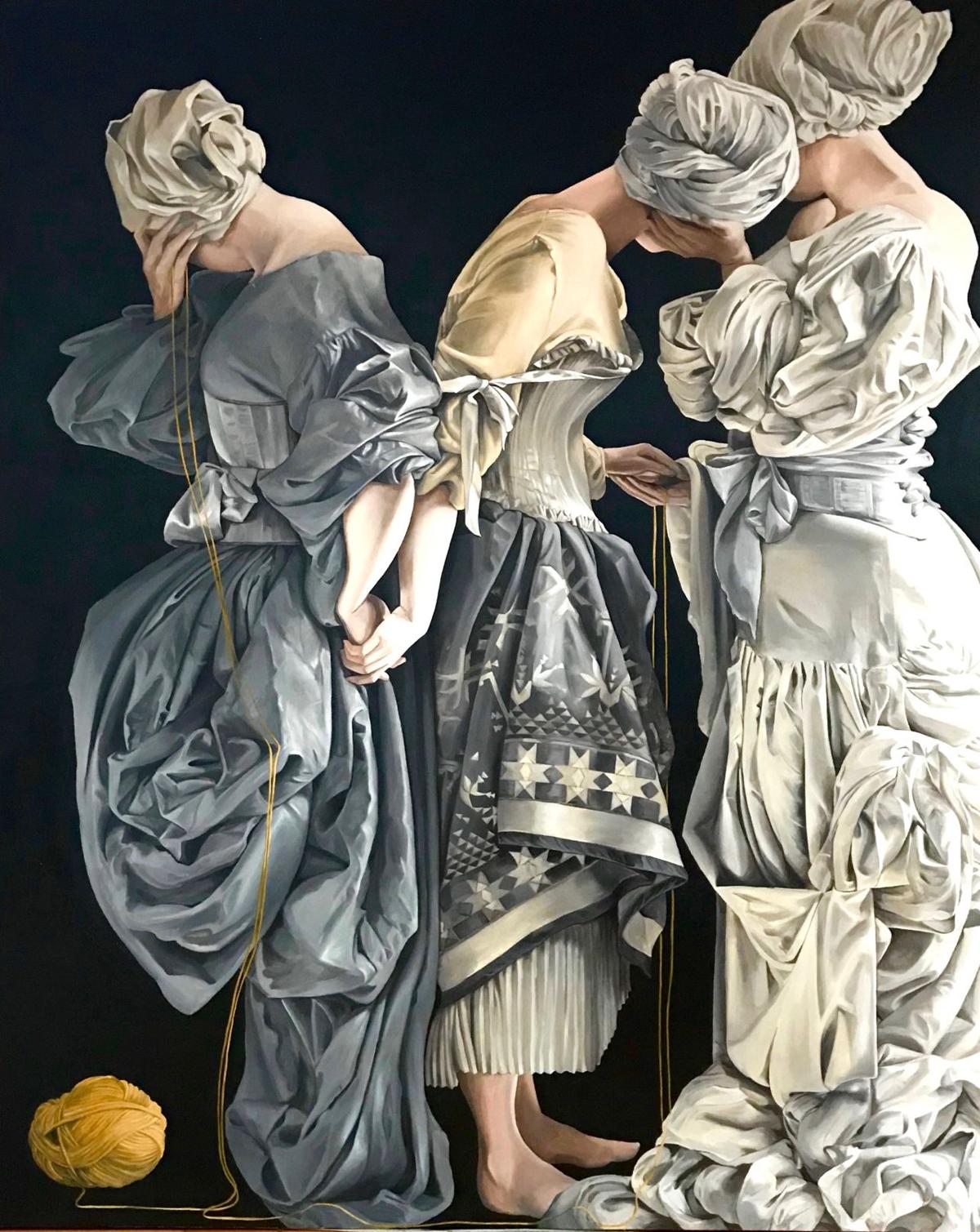 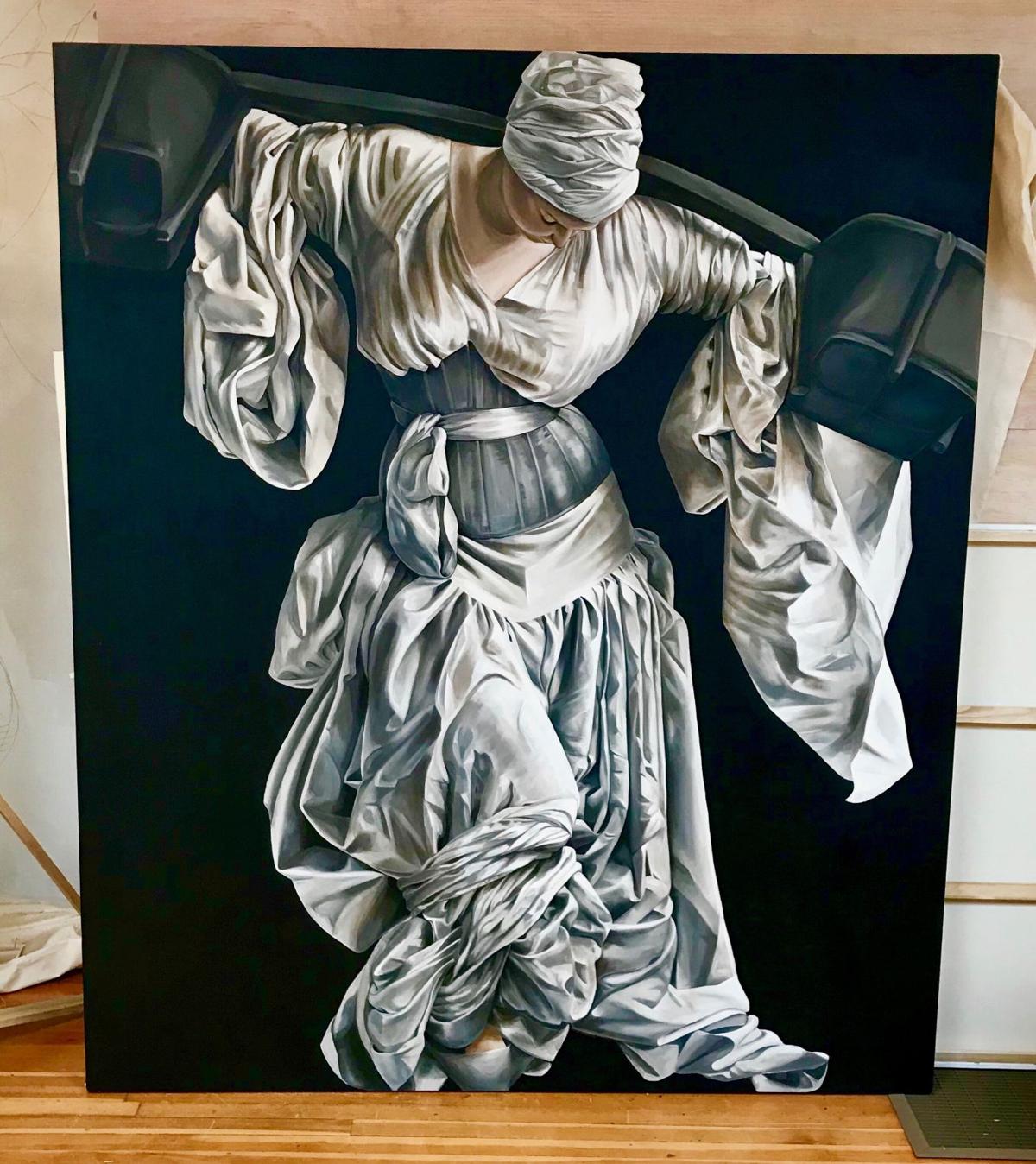 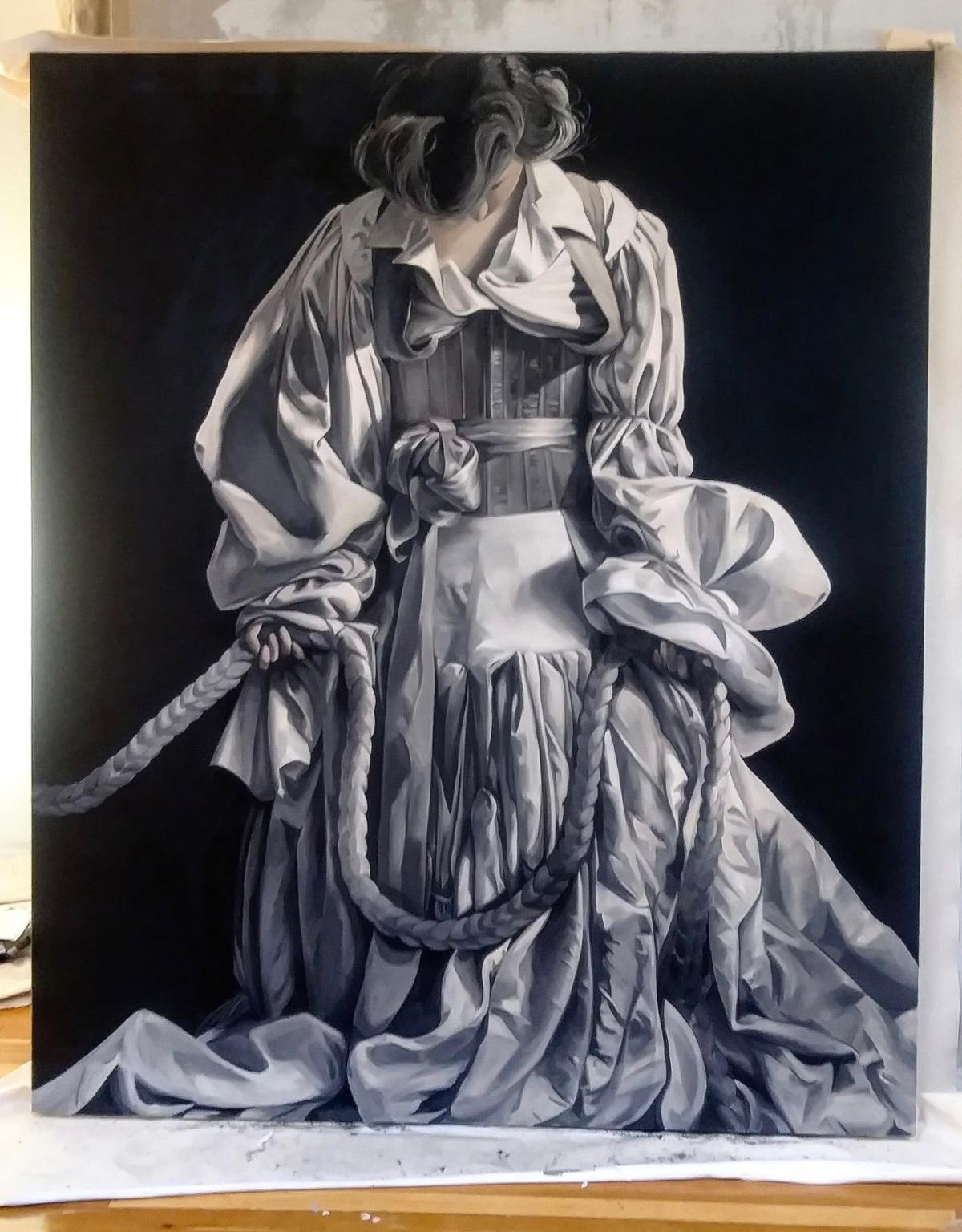 Light pours in through the windows, filtering over the piles of art supplies stacked in shelves, spilling off desks and heaping in baskets on the floor. Sketches scatter the room — on thin papers that nearly cover the floor, on thick canvases propped against an easel, on the cabinets and walls. The chaos is intriguing, though relatively common for an art studio.

What makes this studio unique, however, is the massive painting that dominates the center of the space.

At 8 feet tall and 6 feet wide, local artist Meghann Hanour’s most recent creation, “Sister,” towers over her, even after accounting for her heeled black boots and thick ballerina bun that add an extra 5 inches to her frame. Three women are painted on the canvas, each dawning detailed attire from the biblical age and holding a thin gold strand that weaves among them.

The painting will soon be on display at Astoria’s Imogen Gallery, where a number of Hanour’s works are presented and sold.

“What I love about images is that they use no sound,” Hanour said. “ I love that they speak, but they’re really not saying a word.”

“The woman on the right, she symbolizes this transfer of brightness,” she said, “and she’s transferring this brightness to that middle woman. And then the woman on the left, she’s turned aside because of shame.”

But, more importantly, she said, “Sister” speaks of the connection between women.

“Even when she’s turned aside, her sister is holding her hand and the cord of brightness is still going over to her,” she said. “She’s not alone. I think we all go through times where we feel alone or we feel like we’ve turned aside to something that brings shame or doubt. I wanted to just kind of share that with women.”

Though her art has no letters, that’s typically where her creative process begins.

“I guess it starts with words for me … thoughts and words,” she said. Eventually, the words evolve to mental images, but before she puts them on a canvas, she recreates them in real life by turning to women in the community.

Before each painting, Hanour sets up photo shoots in the ballroom at the Odd Fellows Building. There, she takes hundreds of photographs of her female friends and creative partners, most of them clothed in dresses Hanour has helped make to re-create those initial words in her mind.

One of the models is Jessamyn West, who co-owns the building and serves on the City Council .

“She lives and breathes her art,” West said of Hanour. A few weeks after the photo shoot, Hanour invited West to see the completed painting.

“For me, it’s timeless to be able to stand in front of her work,” West said. “When I’m looking at her paintings, I can’t feel or think of anything else but their stories. What those women are talking about — it’s timeless and it’s iconic and it’s inspiring and heartbreaking and all of these different things.”

Hanour, born in Southern California, was a stay-at-home mom who painted on the side while her children grew. During that time, she would complete one painting a year, if that. She thought returning to work would be the end of her artistic career.

“I remember thinking that I could never be a mom and paint and have a job,” she said.

Two years ago, she moved to Astoria, where she now works full time as a server at Carruthers Restaurant, and continues to carve out time for her art.

Her schedule, now perpetually overbooked, is powered by multivitamins, BarleyMax, krill oil and the right kind of shoes. It’s also steeped in her relationship with God, which she relies on heavily throughout her creative process.

“It gets really intense when you’re alone and you’re pouring this out. You have to be poured back into,” she said. “I pray a lot and I sing a lot through my painting. For me, it’s a lot of prayer and worship time. It’s extremely raw and vulnerable.”

Even in this busy time, Hanour is adding another project to her plate. She has teamed up with seamstresses and is planning the launch of her handmade clothing line, Ruth. The inspiration for the clothes comes from her desire for simple, elegant wearability. The inspiration behind the name, however, is a bit more personal.

Ruth is a character in the Bible who faced heavy losses.

“It’s the story of an outsider who was brought in to favor and kindness and regained something that was lost. It’s a story of redemption,” Hanour said. She found herself identifying with Ruth’s story so much, she painted the character this year.

“To me it’s really inspiring,” she said of the biblical tale. “When I came to Astoria I lost a lot, and coming here I found a lot of kindness in the community. It’s close to my heart.”

Great article, I have been looking to add more omega 3 to my diet. Krill oil seems to have the most health benefits vs fish oil. Need more healthy fats in my diet. Here is another interesting article on Krill Oil vs. Fish Oil: https://heliossupplements.com/pages/krill-oil-vs-fish-oil